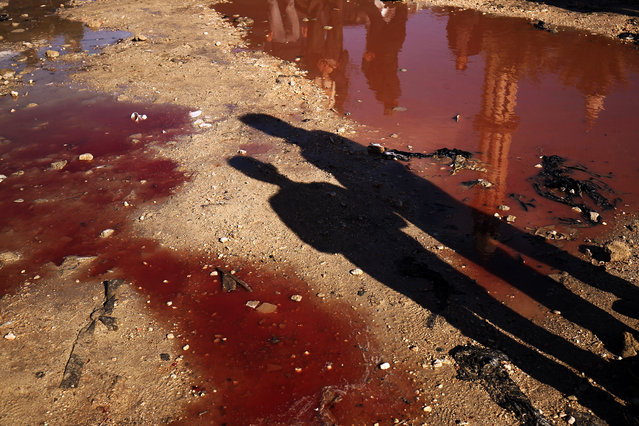 Libyans check the aftermath of an explosion in the eastern city of Benghazi on January 24, 2018. The death toll following a double car bomb attack in the Libyan city of Benghazi night has risen to at least 34, a hospital spokeswoman said. (Photo by Abdullah Doma/AFP Photo) 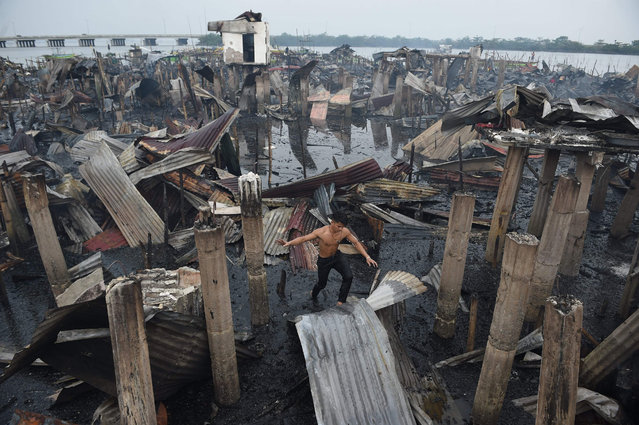 A resident walks on a galvanized roof sheet and destroyed homes after a fire hit at an informal settlers area along the coast in Bacoor town, Cavite province, southwest of Manila on January 24, 2018. Around 200 houses were destroyed affecting a thousand residents, no death or injury were reported. (Photo by Ted Aljibe/AFP Photo) 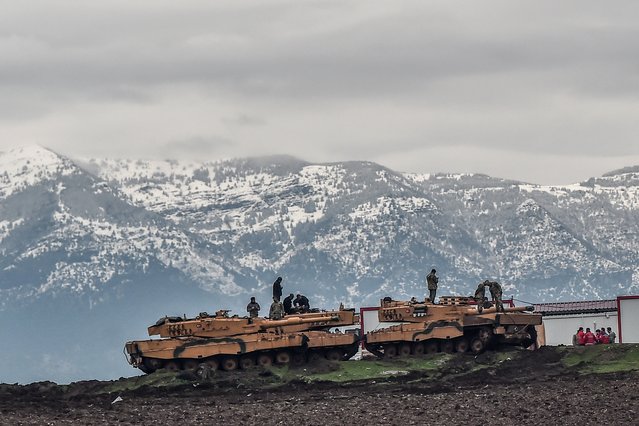 Turkish tanks are parked near the Syrian border at Hassa, in Hatay province on January 24, 2018, as part of the operation “Olive Branch”, launched a few days ago. The operation aims to oust the People's Protection Units (YPG) militia, which Turkey considers to be a terror group, from its enclave of Afrin. (Photo by Ozan Kose/AFP Photo) 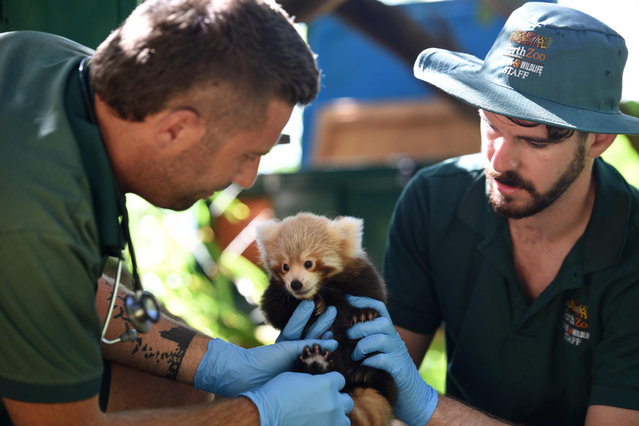 This handout photo taken by Alex Asbury on January 22, 2018 and released to AFP via Perth Zoo on January 24, 2018 shows staff members at the Perth Zoo with a new baby Nepalese red panda in Perth, Western Australia The zoo' s latest red panda was born two months ago to a nine- year- old mother who was also born at the zoo. (Photo by Alex Asbury/AFP Photo/Perth Zoo) 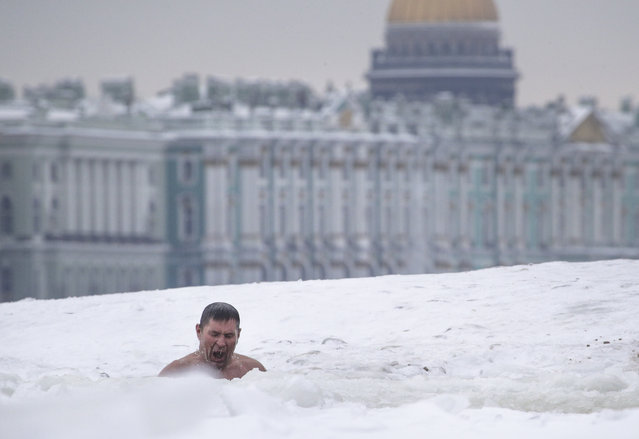 A man swims in a ice hole in the Neva River in St.Petersburg, Russia, Wednesday, January 24, 2018, with the St.Isaac's Cathedral and Winter Palace in the background. The temperature in St. Petersburg is minus 7 degrees Centigrade (19 degrees Fahrenheit). (Photo by Dmitri Lovetsky/AP Photo) 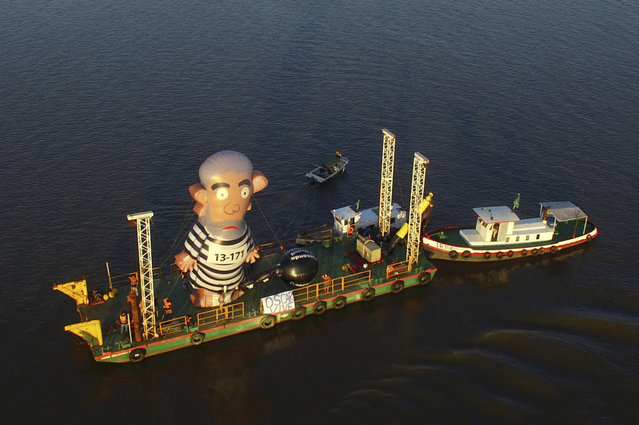 A large inflatable doll of former President Luiz Inacio Lula da Silva in prison garb is displayed on a boat at the river Guaiba in Porto Alegre, Brazil, Wednesday, January 24, 2018. An appellate court in Brazil on Wednesday considered whether to uphold or throw out a corruption conviction against da Silva, a decision that could impact presidential elections and even stability in Latin America's largest nation. (Photo by Wesley Santos/AP Photo) 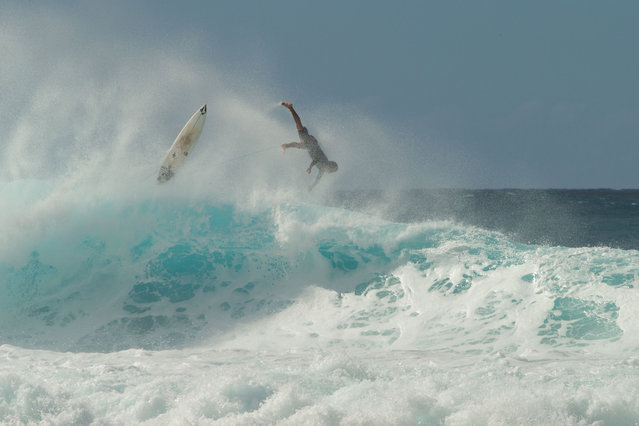 Surfer Jonah Morgan wipes out during a late afternoon free surf session at the legendary Banzai Pipeline on the North shore of Oahu, Hawaii, on January 22, 2018. (Photo by Brian Bielmann/AFP Photo) 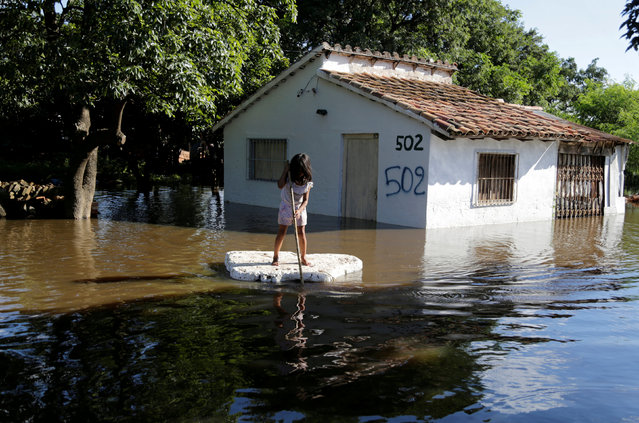 A young girl uses a piece of styrofoam as a paddle board next to a flooded home after heavy rains caused the river Paraguay to overflow, on the outskirts of Asuncion, Paraguay January 23, 2018. (Photo by Jorge Adorno/Reuters) 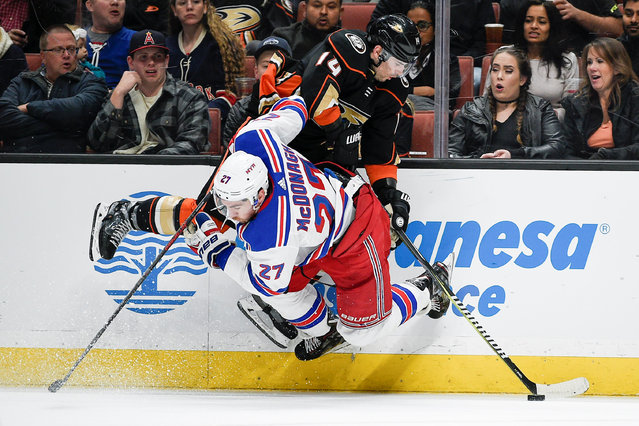 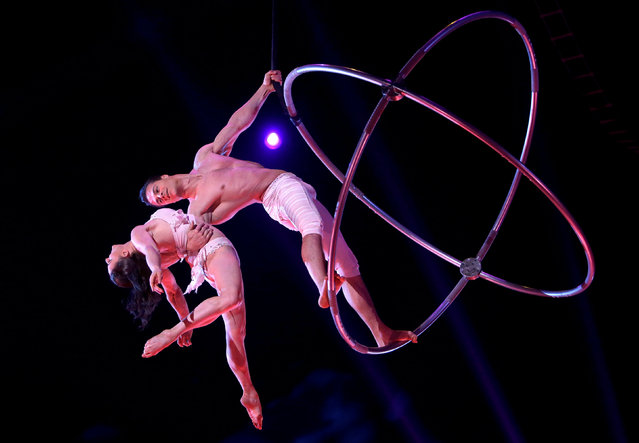 The Duo 2-Zen-0 perform during the Gala evening of the 42th Monte-Carlo International Circus Festival in Monaco, January 23, 2018. (Photo by Claude Paris/Reuters) 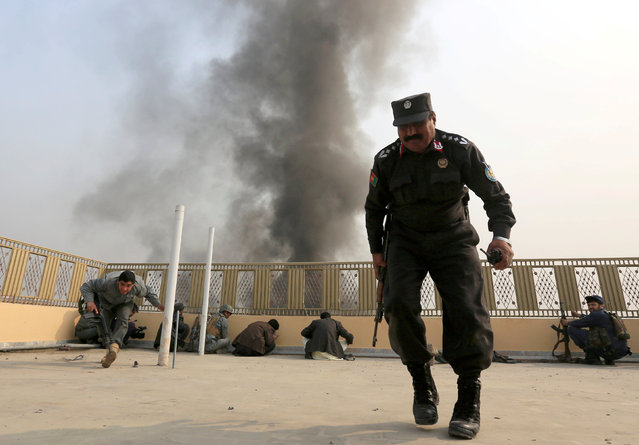 Afghan police officers take position during a blast and gun fire in Jalalabad, Afghanistan January 24, 2018. Attahullah Khogyani, spokesman for the provincial governor said a group of gunmen stormed the office of the non-governmental organization, “Save the Children”. (Photo by Reuters/Parwiz) 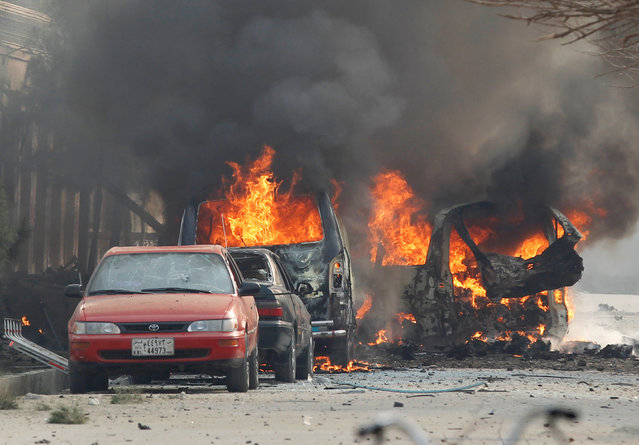 Vehicles are seen on fire after a blast in Jalalabad, Afghanistan January 24, 2018. (Photo by Reuters/Parwiz) 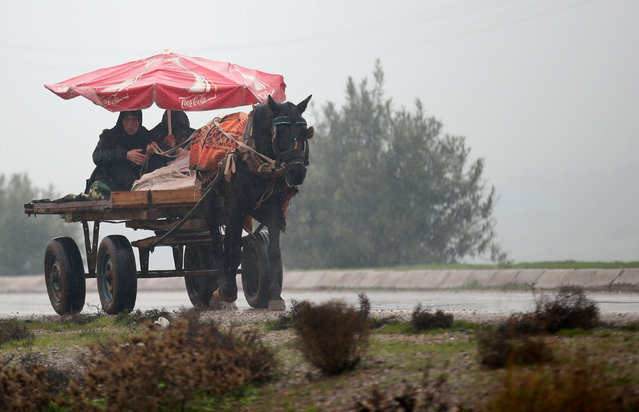 A woman rides a horse cart under the rain on a main road that leads to the Turkish Cilvegozu border gate, located opposite of Syrian crossing point Bab al-Hawa in Reyhanli, in Hatay province, Turkey, January 24, 2018. (Photo by Umit Bektas/Reuters) 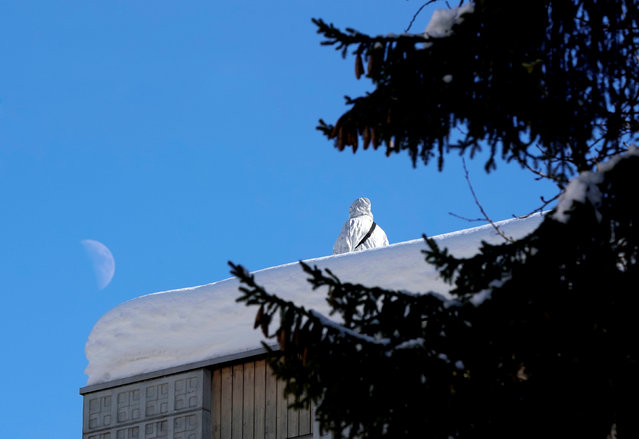 A Swiss special police officer observes the surrounding area from atop the roof of the Davos Congress Hotel during the World Economic Forum (WEF) annual meeting in Davos, Switzerland January 24, 2018. (Photo by Denis Balibouse/Reuters) 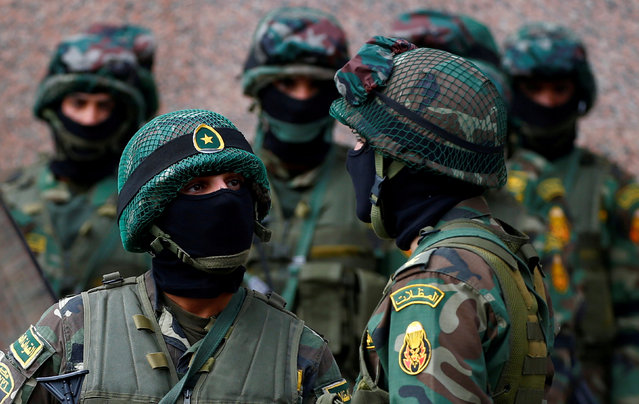 Special forces soldiers guard the National Election Authority, which is in charge of supervising the 2018 presidential election in Cairo, Egypt, January 24, 2018. (Photo by Amr Abdallah Dalsh/Reuters) 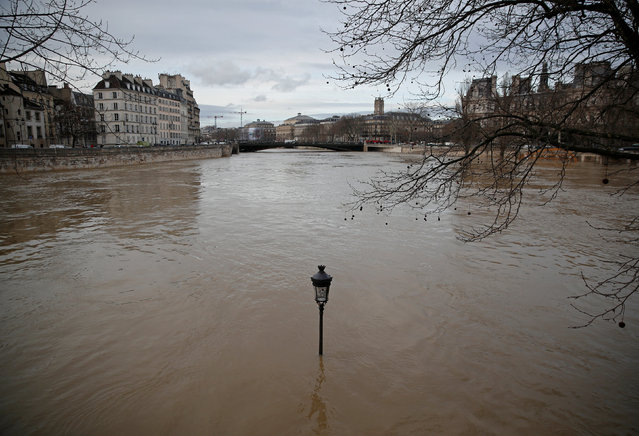 A street-lamp is seen on the flooded banks of the Seine River in Paris, France, after days of almost non-stop rain caused flooding in the country, January 24, 2018. (Photo by Christian Hartmann/Reuters) 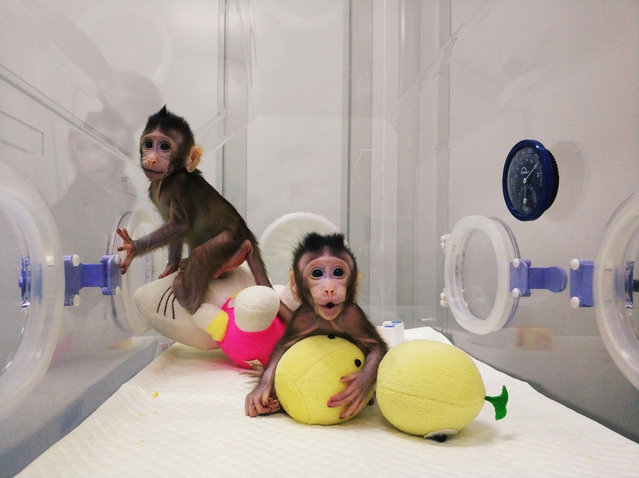 This handout picture from the Chinese Academy of Sciences Institute of Neuroscience, taken on January 20 and released on January 24, 2018 shows monkey clones “Zhong Zhong” (L) and “Hua Hua” at a research institution in Suzhou in China' s Jiangsu province Scientists in China have created the first monkeys cloned by the same process that produced Dolly the sheep more than 20 years ago, a breakthrough that could boost medical research into human diseases. (Photo by AFP Photo/Picturedesk) 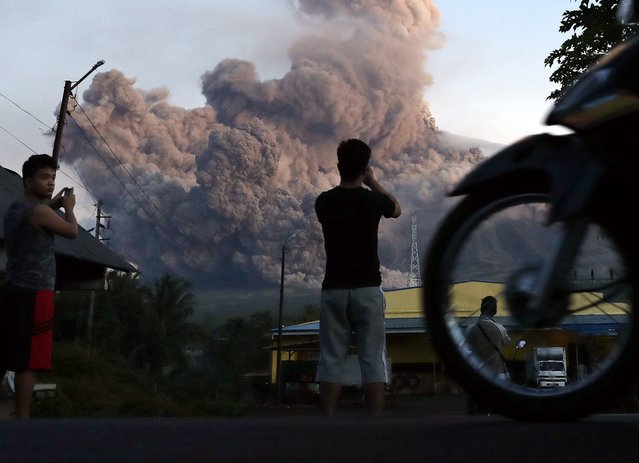 Filipino villagers look on as Mayon Volcano erupts anew in the town of Daraga, Albay province, Philippines 24 January 2018. The Philippines, which currently has 23 active volcanoes, is situated on the so-called 'Pacific Ring of Fire' an area known for its intense seismic activity which extends from the west coast of the American continent to New Zealand, Japan, the Philippines and Indonesia. (Photo by Francis R. Malasig/EPA/EFE/Shutterstock) 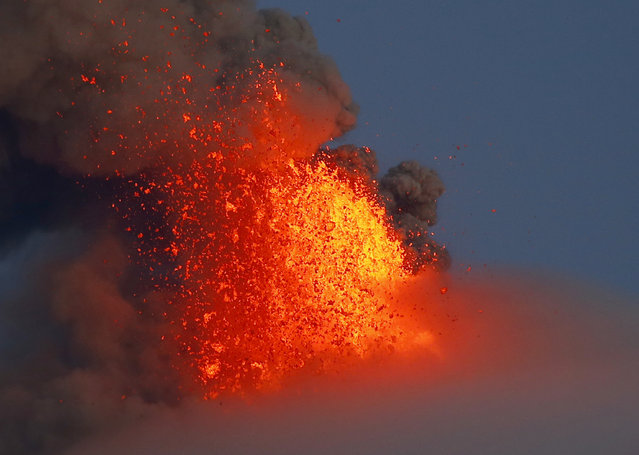 Mayon volcano spews red-hot lava in another eruption as seen from Legazpi city, Albay province, around 340 kilometers (200 miles) southeast of Manila, Philippines, Wednesday, January 24, 2018. Lava fountaining regularly from the Philippines' most active volcano has flowed up to 3 kilometers (1.86 miles) from the crater in a dazzling but increasingly dangerous eruption. Mount Mayon has spewed lava up to 600 meters (2,000 feet) high at times Tuesday and early Wednesday and its ash plumes stretched up to 5 kilometers (3 miles) above the crater. (Photo by Bullit Marquez/AP Photo) 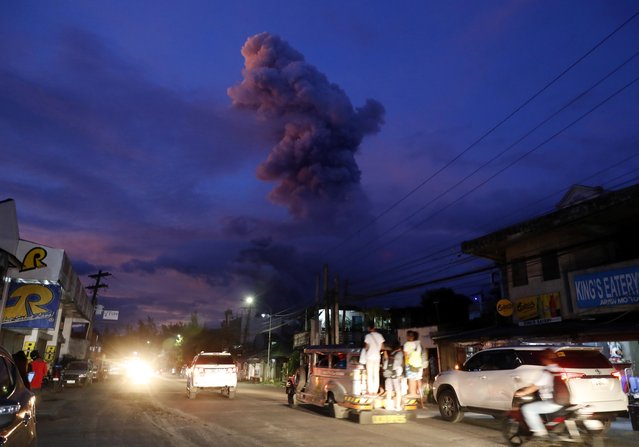 A view of Mayon Volcano erupts anew in the town of Daraga, Albay province, Philippines, 24 January 2018. Mayon volcano located in eastern Philippines and active over the last 10 days spewed fresh lava and ash in two new eruptions a day earlier. The number of evacuees exceeded 60 thousand in the face of the threat of an even more potent explosion. The Philippines, which currently has 23 active volcanoes, is situated on the so-called “Pacific Ring of Fire”, an area known for its intense seismic activity which extends from the west coast of the American continent to New Zealand, Japan, the Philippines and Indonesia. (Photo by Francis R. Malasig/EPA/EFE/Shutterstock) 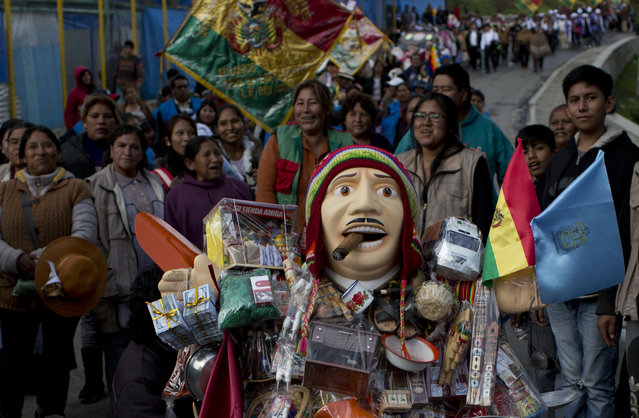 People accompany the statue of Ekeko, the Bolivian god of prosperity and the central figure of the Alasita miniature fair, in La Paz, Bolivia, Tuesday, January 23, 2018. (Photo by Juan Karita/AP Photo) 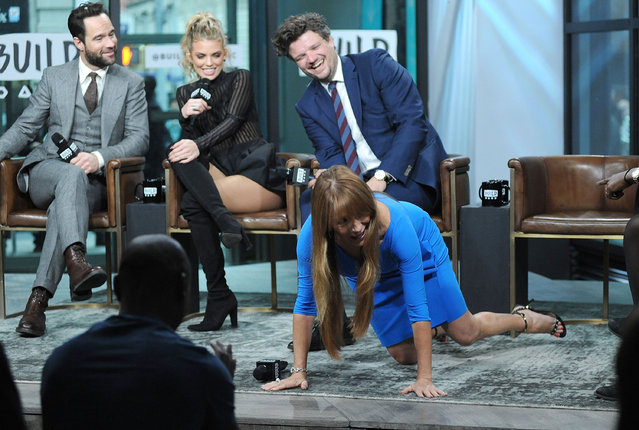