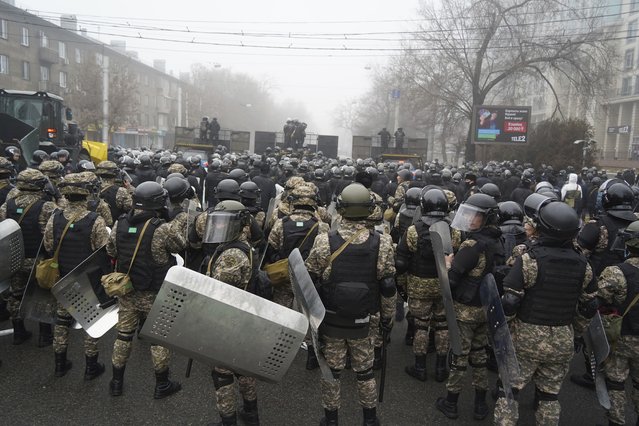 Riot police block a street to prevent demonstrators during a protest in Almaty, Kazakhstan, Wednesday, January 5, 2022. Demonstrators denouncing the doubling of prices for liquefied gas have clashed with police in Kazakhstan's largest city and held protests in about a dozen other cities in the country. (Photo by Vladimir Tretyakov/AP Photo) 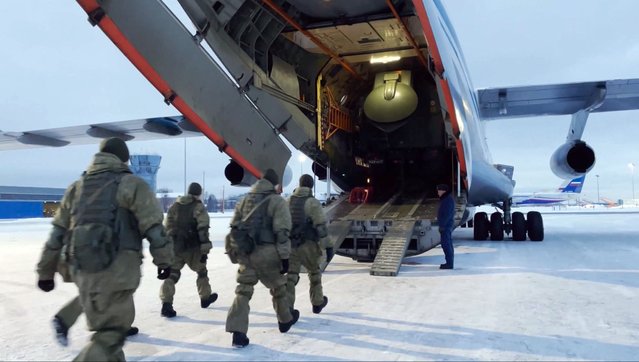 In this photo taken from video released by the Russian Defense Ministry Press Service, Russian peacekeepers board on a Russian military plane at an airfield outside Moscow, in Russia to fly to Kazakhstan Thursday, January 6, 2022. A Russia-led military alliance, the Collective Security Treaty Organization, said early Thursday that it would send peacekeeper troops to Kazakhstan at the request of President Kassym-Jomart Tokayev. (Photo by Russian Defense Ministry Press Service via AP Photo) 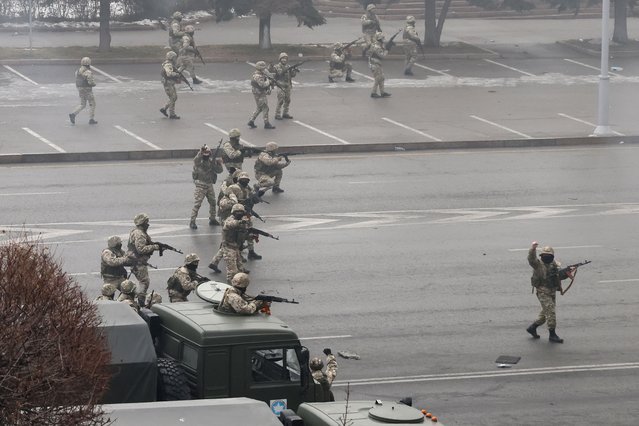 Security forces are used in a counterterrorism operation to stop mass unrest in Almaty, Kazakhstan on January 6, 2022. Protests were sparked by rising fuel prices in the towns of Zhanaozen and Aktau in western Kazakhstan on 2 January and spread rapidly across the country. Following a meeting between a government commission and protesters, the price for liquefied petroleum gas went down from $0.27 to $0.11. On 5 January, President Tokayev dismissed the cabinet and declared a 2 week state of emergency in the Mangistau and Almaty regions, as well as in the cities of Almaty and Nur-Sultan. (Photo by Valery Sharifulin/TASS) 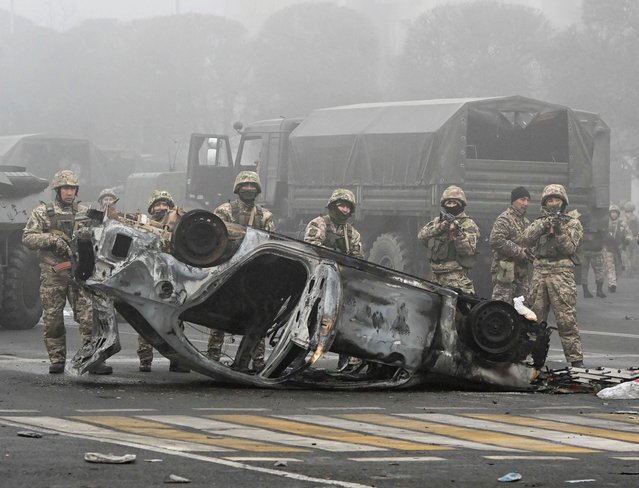 Troops are seen at the main square where hundreds of people were protesting against the government, after authorities' decision to lift price caps on liquefied petroleum gas, in Almaty, Kazakhstan on January 6, 2022. (Photo by Mariya Gordeyeva/Reuters) 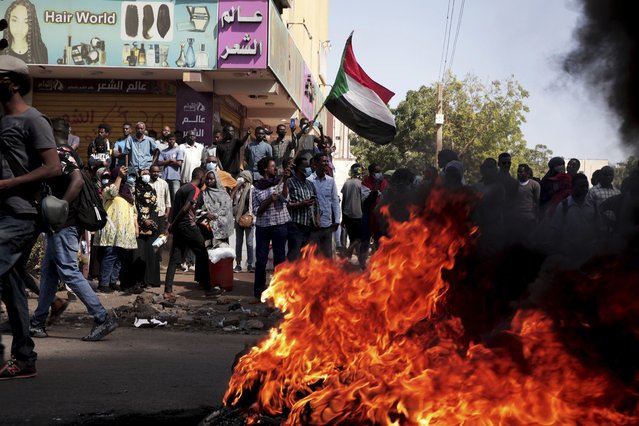 People chant slogans and burn tires during a protest to denounce the October 2021 military coup, in Khartoum, Sudan, Thursday, January 6, 2022. Sudanese took to the streets in the capital, Khartoum, and other cities on Thursday in anti-coup protests as the country plunged further into turmoil following the resignation of the prime minister earlier this week. (Photo by Marwan Ali/AP Photo) 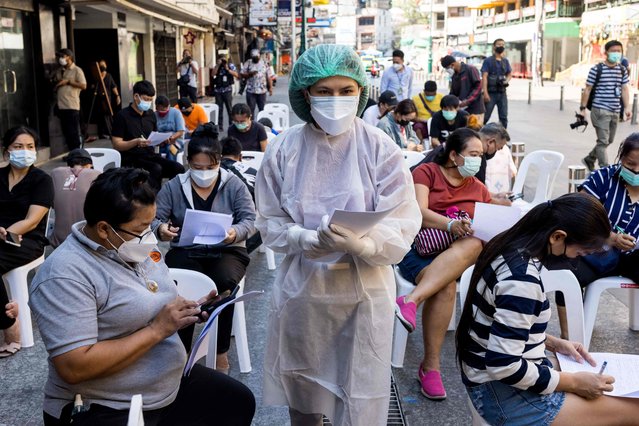 A medical worker assists people with registration, as hospitality and tourism workers are tested for the Covid-19 coronavirus on Khao San Road, in Bangkok on January 6, 2022. (Photo by Jack Taylor/AFP Photo) 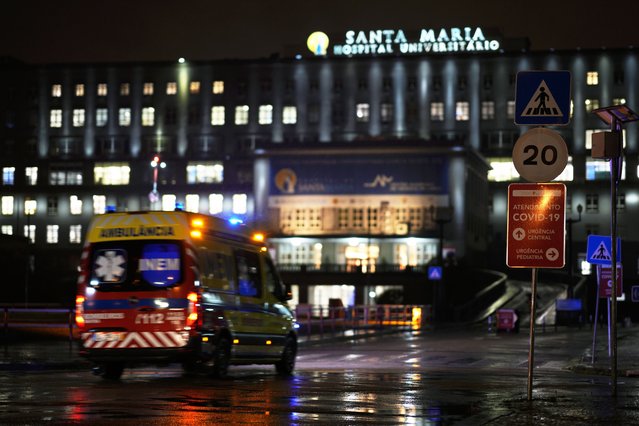 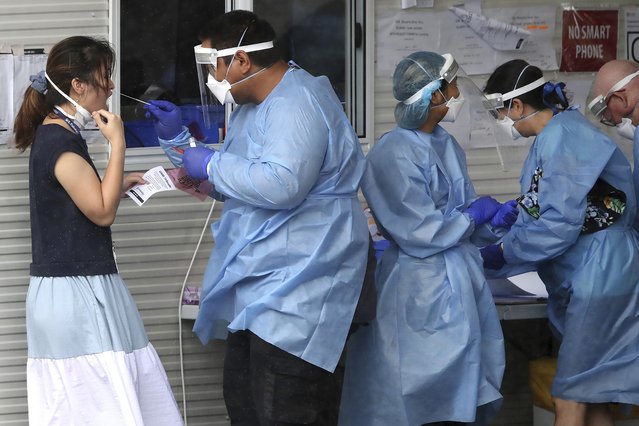 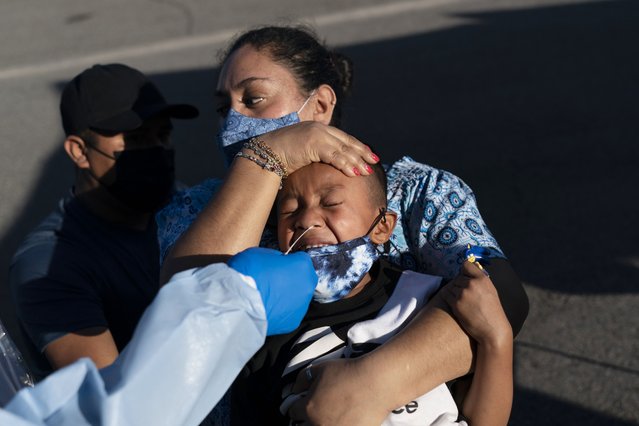 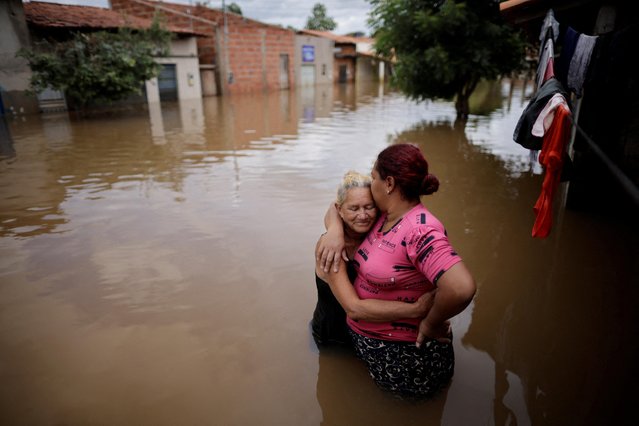 Ilzete is embraced by her daughter Joelma in front of a flooded house during floods caused by heavy rain in Imperatriz, Maranhao state, Brazil on January 6, 2022. (Photo by Ueslei Marcelino/Reuters) 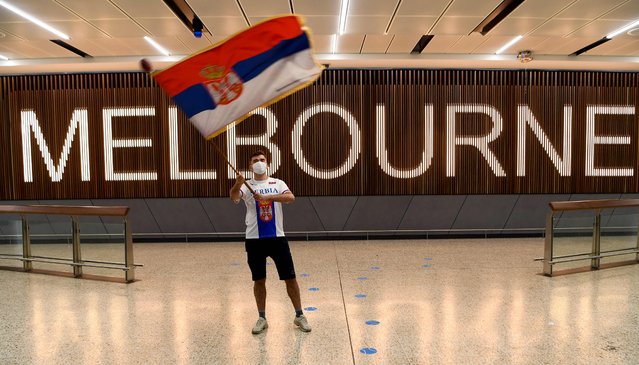 A Serbian tennis fan waves a flag as he awaits the arrival of Serbia's tennis champion Novak Djokovic in Melbourne on January 6, 2022. After arriving in Melbourne late on January 5, world number one Novak Djokovic may have encountered a late snag on his trip to play in the Australian Open, after state government officials refused to support his visa application. (Photo by William West/AFP Photo) 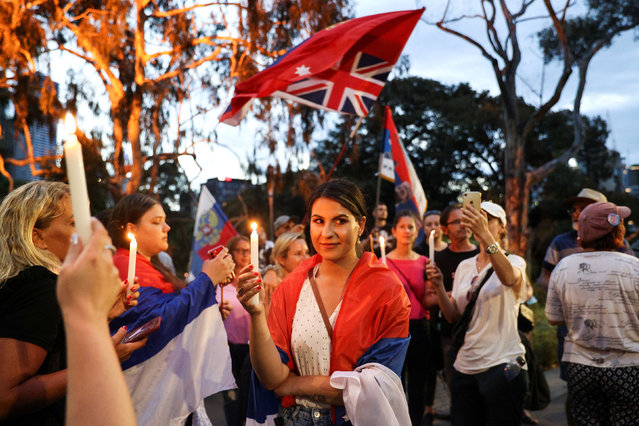 Jelena Stankovic, a supporter of Serbian tennis player Novak Djokovic, rallies with fellow fans outside the Park Hotel, where the star athlete is believed to be held while he stays in Australia, in Melbourne, Australia, January 6, 2022. (Photo by Loren Elliott/Reuters) 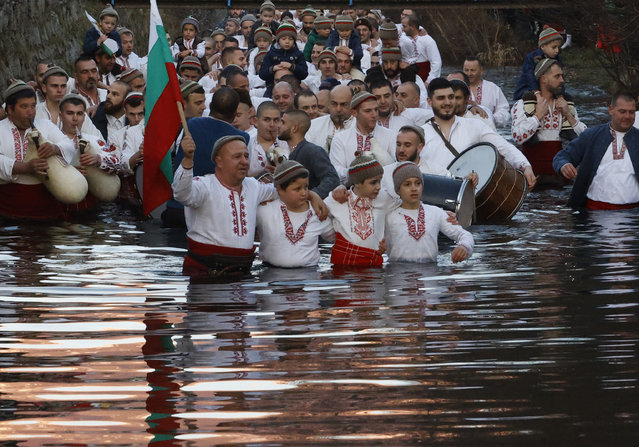 Men and young boys celebrate Epiphany in the icy Tundzha River in the town of Kalofer, Thursday, January 6, 2022. The legend goes that the person who retrieves the wooden cross will be freed from evil spirits and will be healthy throughout the year. After the cross is fished out, the priest delivers a special blessing to that man and his household. In the small mountain city of Kalofer in central Bulgaria the ritual lasts longer, as nearly a hundred men dressed in traditional white embroidered shirts wade into the Tundzha River to perform a slow “mazhko horo”, or men's dance. (Photo by Valentina Petrova/AP Photo) 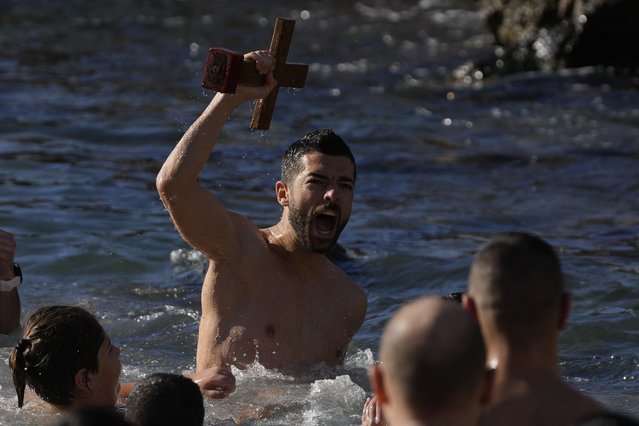 A pilgrim reacts after catching the cross during a water blessing ceremony marking the Epiphany celebrations at Piraeus port, near Athens, Thursday, January 6, 2022. Celebrations to mark the Christian holiday of Epiphany were canceled or scaled back in many parts of Greece Thursday as the country struggles with a huge surge in COVID-19 infections driven by the omicron variant. (Photo by Thanassis Stavrakis/AP Photo) 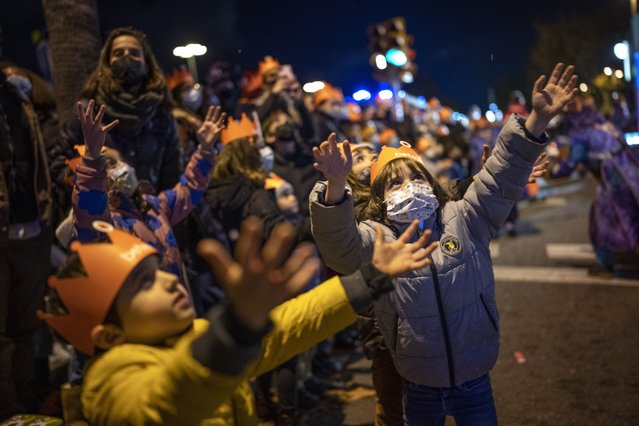 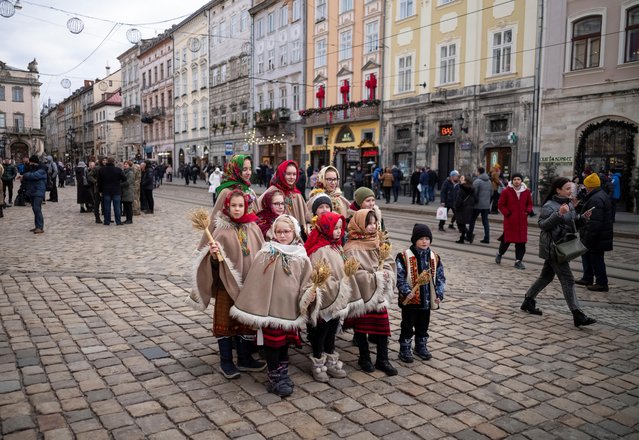 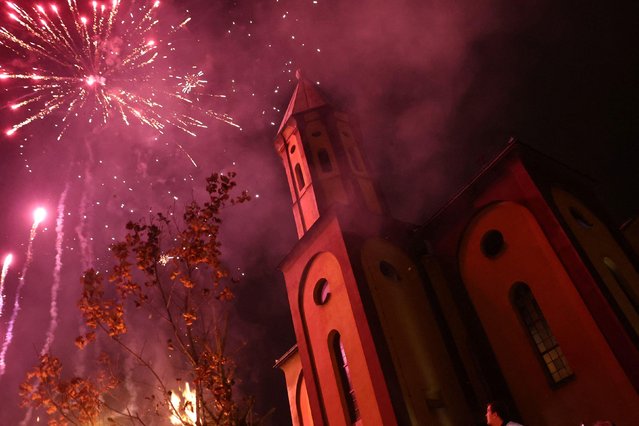 Fireworks are seen near the burning Yule logs in front of the Church of the Holy Mother of God during the eve of Orthodox Christmas in Zenica, Bosnia and Herzegovina, January 6, 2022. (Photo by Dado Ruvic/Reuters) 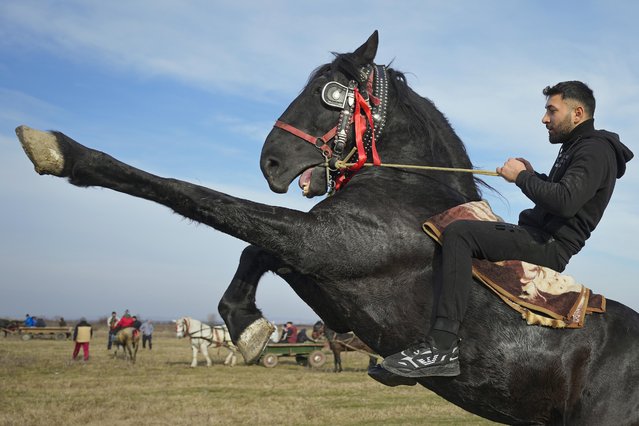 A man shows off riding skills during Epiphany celebrations in the village of Pietrosani, Romania, Thursday, January 6, 2022. According to the local Epiphany traditions, following a religious service, villagers have their horses blessed with holy water then compete in a race. (Photo by Vadim Ghirda/AP Photo) 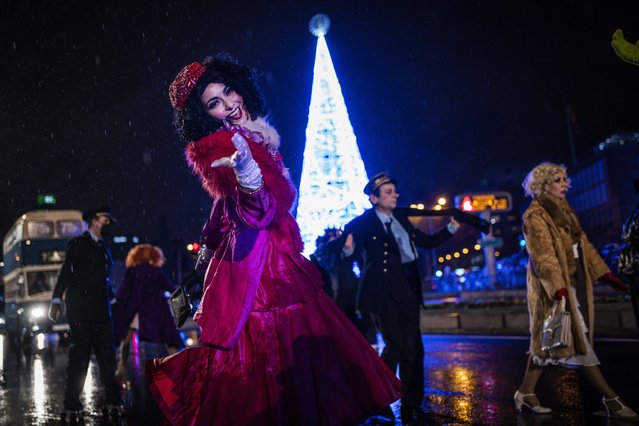 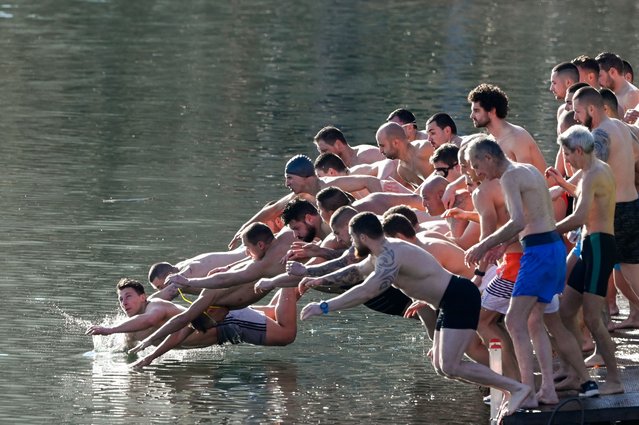 Bulgarian Orthodox faithfuls dive into water of a lake to catch a wooden crucifix as part of Epiphany Day celebrations in Sofia, on January 6, 2022. As a tradition, an Eastern Orthodox priest throws a cross in the river and it is believed that the one who retreives it will be healthy throughout the year as well as all those who dance in the icy waters. (Photo by Nikolay Doychinov/AFP Photo) 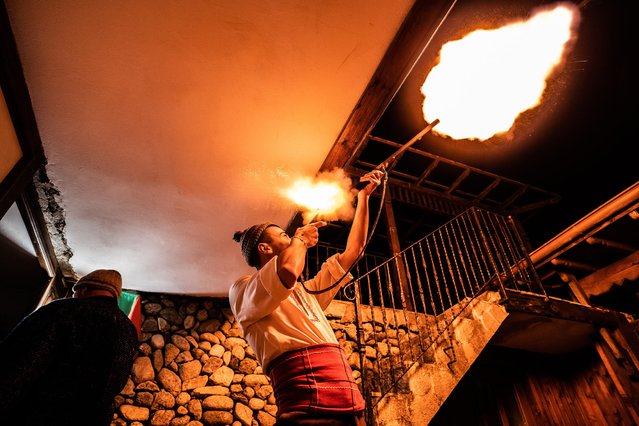 Genko Stoykov fires a rifle as he and other men prepare for the traditional “Horo” dance on Epiphany Day in the icy winter waters of the Tundzha river on January 6, 2022 in Kalofer, Bulgaria. As part of the tradition, a priest throws a cross in the river and it is believed that the one who retrieves it will be healthy throughout the year. Today, cultures throughout Christendom mark the Feast of the Epiphany, when Jesus was revealed to the Magi as God incarnate. (Photo by Hristo Rusev/Getty Images)
Edit Del
07 Jan 2022 08:30:00, post received 0 comments
Publication archive:
←   →
Popular tags:
All tags
Last searches: