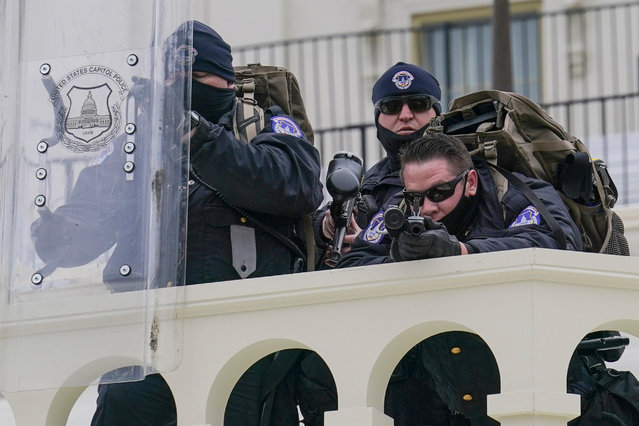 Police keep a watch on demonstrators who tried to break through a police barrier, Wednesday, January 6, 2021, at the Capitol in Washington. As Congress prepares to affirm President-elect Joe Biden's victory, thousands of people have gathered to show their support for President Donald Trump and his claims of election fraud. (Photo by John Minchillo/AP Photo) 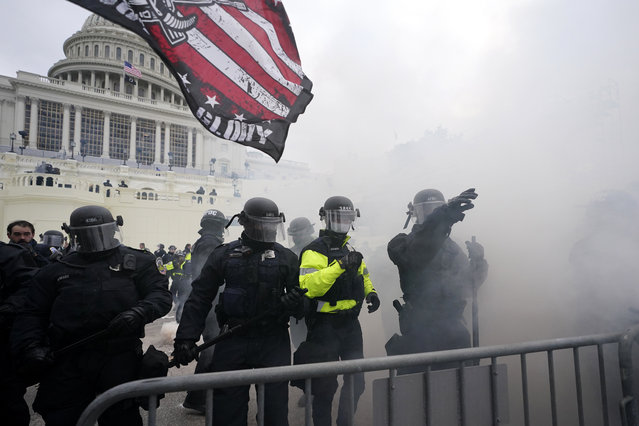 Police hold off Trump supporters who tried to break through a police barrier, Wednesday, January 6, 2021, at the Capitol in Washington. As Congress prepares to affirm President-elect Joe Biden's victory, thousands of people have gathered to show their support for President Donald Trump and his claims of election fraud. (Photo by Julio Cortez/AP Photo) 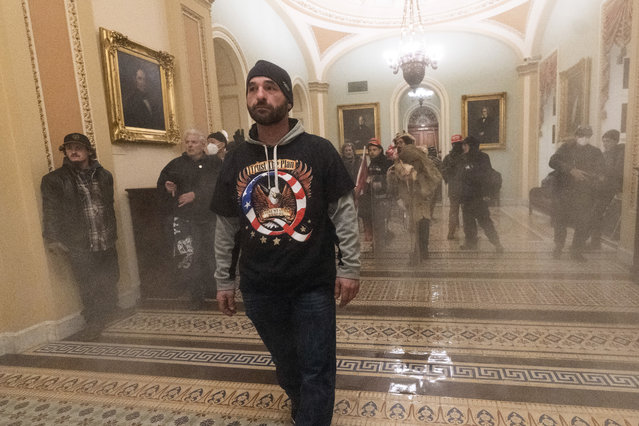 Smoke fills the walkway outside the Senate Chamber as supporters of President Donald Trump are confronted by U.S. Capitol Police officers inside the Capitol, Wednesday, January 6, 2021 in Washington. (Photo by Manuel Balce Ceneta/AP Photo) 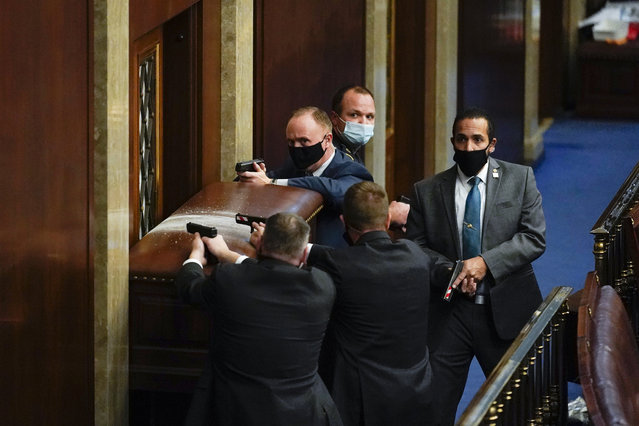 U.S. Capitol Police with guns drawn stand near a barricaded door as protesters try to break into the House Chamber at the U.S. Capitol on Wednesday, January 6, 2021, in Washington. (Photo by Andrew Harnik/AP Photo) 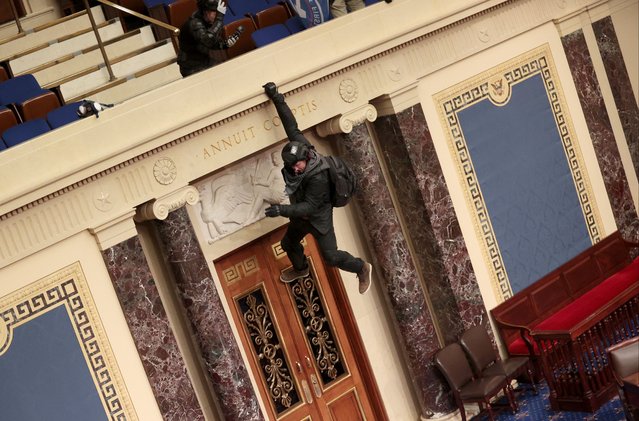 A protester is seen hanging from the balcony in the Senate Chamber on January 06, 2021 in Washington, DC. Congress held a joint session today to ratify President-elect Joe Biden's 306-232 Electoral College win over President Donald Trump. Pro-Trump protesters have entered the U.S. Capitol building after mass demonstrations in the nation's capital. (Photo by Win McNamee/Getty Images) 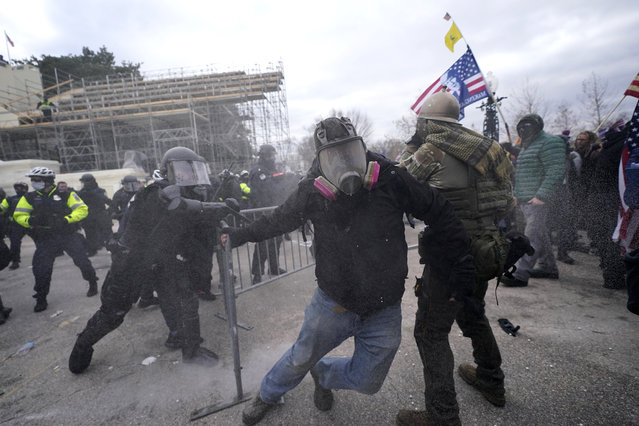 Trump supporters try to break through a police barrier, Wednesday, January 6, 2021, at the Capitol in Washington. (Photo by Julio Cortez/AP Photo) 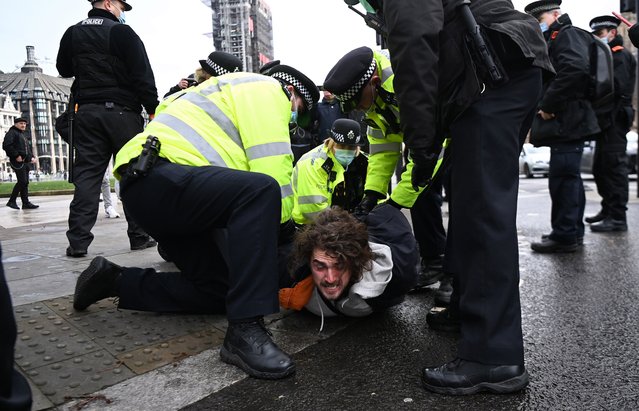 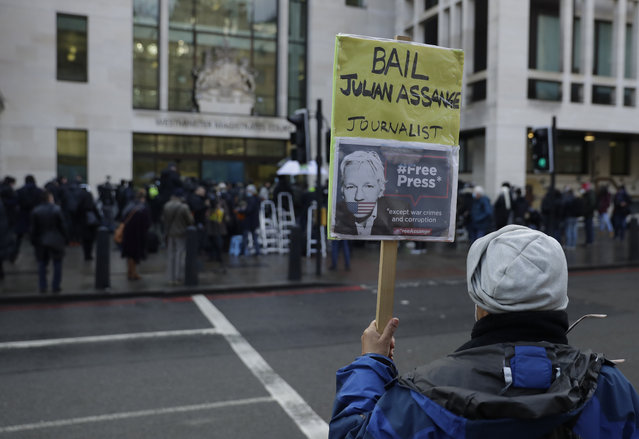 A Julian Assange supporter holds up a placard outside Westminster Magistrates Court as his bail hearing is held at the court in London, Wednesday, January 6, 2021. On Monday Judge Vanessa Baraitser ruled that Julian Assange cannot be extradited to the US. because of concerns about his mental health. Assange had been charged under the US's 1917 Espionage Act for “unlawfully obtaining and disclosing classified documents related to the national defence”. Assange remains in custody, the US. has 14 days to appeal against the ruling. (Photo by Matt Dunham/AP Photo) 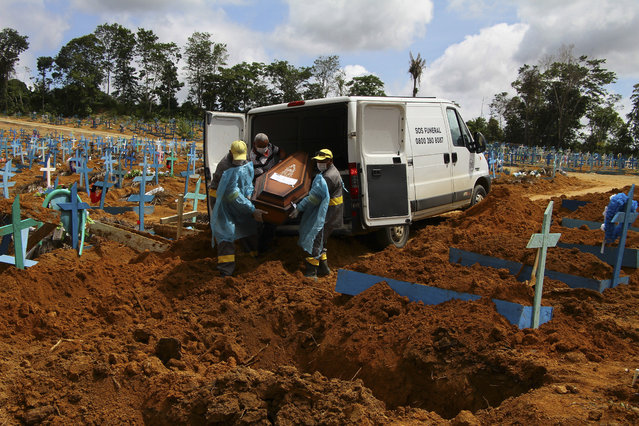 Cemetery workers carry the remains of 89-year-old Abilio Ribeiro, who died of the new coronavirus, to bury at the Nossa Senhora Aparecida cemetery in Manaus, Amazonas state, Brazil, Wednesday, January 6, 2021. Manaus declared on Jan. 5 a 180-day state of emergency due to a surge of new cases of coronavirus. (Photo by Edmar Barros/AP Photo) 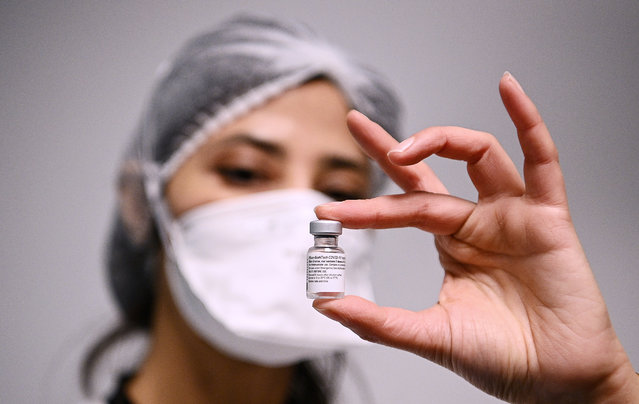 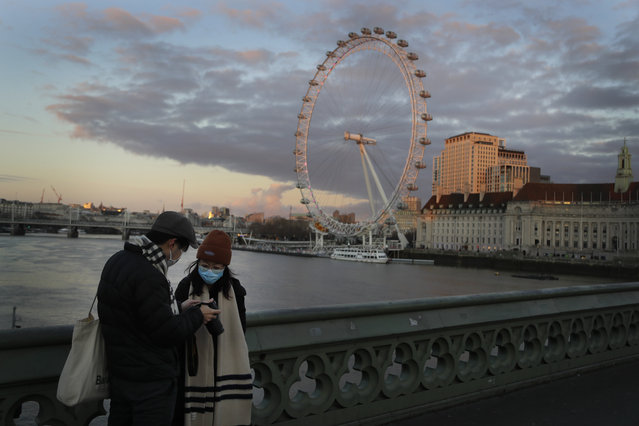 A couple stand on Westminster Bridge as the sun sets in London, Wednesday, January 6, 2021. Britain's Prime Minister Boris Johnson has ordered a new national lockdown for England which means people will only be able to leave their homes for limited reasons, with measures expected to stay in place until mid-February. (Photo by Kirsty Wigglesworth/AP Photo) 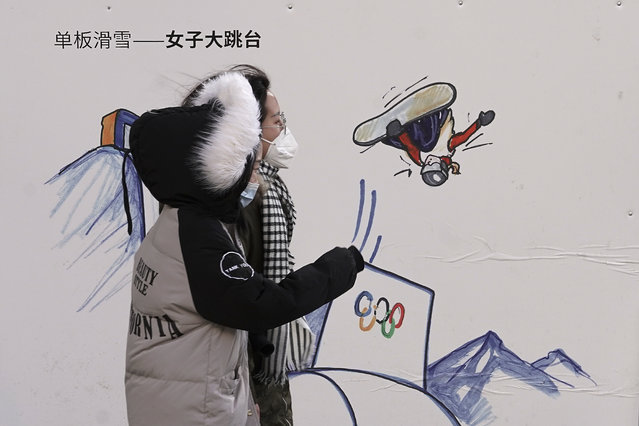 Women wearing face masks to help curb the spread of the coronavirus walk by a board depicting a Winter Olympics snowboard event at a shopping mall in Beijing, Wednesday, January 6, 2021. China's Hebei province is enforcing stricter control measures following a further rise in coronavirus cases in the province, which is adjacent to the capital Beijing and is due to host events for next year's Winter Olympics. (Photo by Andy Wong/AP Photo) 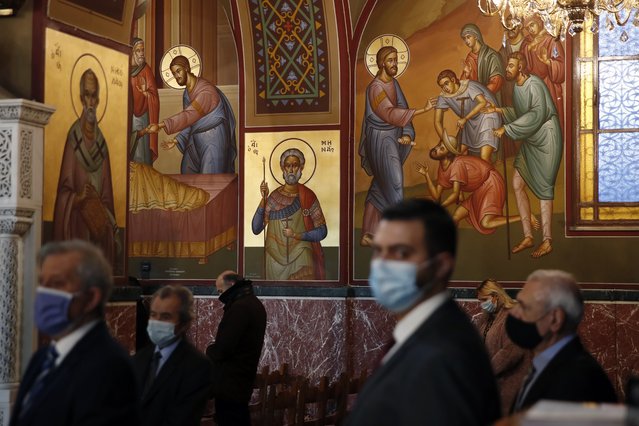 A limited congregation attends the service for the feast of the Epiphany in the Church of the Holy Trinity in Piraeus, the port of Athens, Wednesday, January 6, 2021. The Greek government relented and allowed limited attendance at churches celebrating the feast of the Epiphany on Wednesday, reversing a ban on attendance designed to limit the spread of the coronavirus. (Photo by Thanassis Stavrakis/AP Photo) 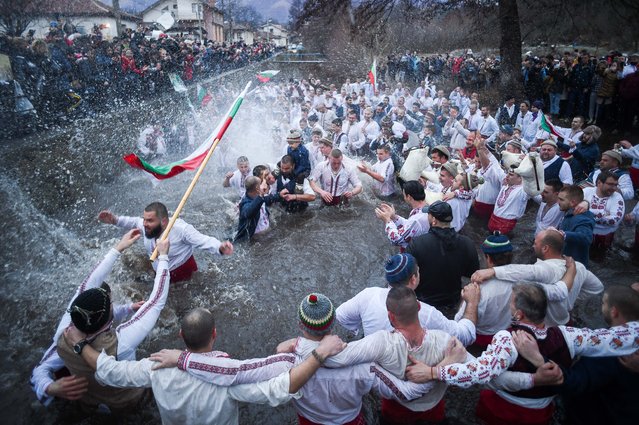 Bulgarian men perform the traditional “Horo” dance in the icy winter waters of the Tundzha river in the town of Kalofer, as part of Epiphany Day celebrations on January 6, 2021, despite the Covid-19 restrictions in the country. As a tradition, an Eastern Orthodox priest throws a cross in the river and it is believed that the one who retreives it will be healthy throughout the year as well as all those who dance in the icy waters. (Photo by Nikolay Doychinov/AFP Photo)
Edit Del
08 Jan 2021 00:07:00, post received 0 comments
Publication archive:
←   →
Popular tags:
All tags
Last searches: