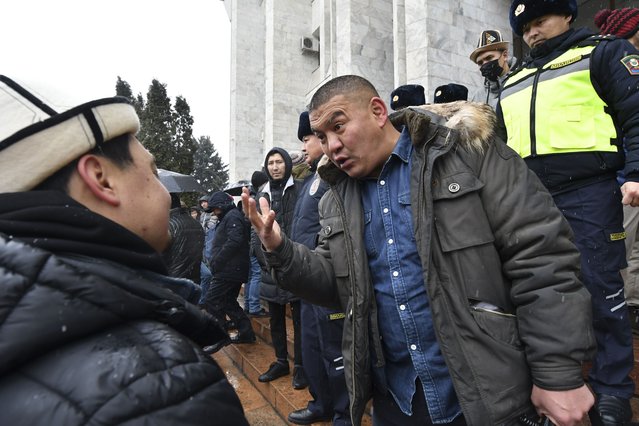 Protesters talk to each other as they gather in support of Kazakh opposition and against deploying Kyrgyzstan's troops to Kazakhstan during a rally in Bishkek, Kyrgyzstan, Friday, January 7, 2022. The Collective Security Treaty Organization, which includes the former Soviet republics of Kazakhstan, Belarus, Armenia, Tajikistan and Kyrgyzstan have started deploying troops to Kazakhstan for a peacekeeping mission after the worst street protests since the country gained independence three decades ago. The demonstrations began over a near-doubling of prices for a type of vehicle fuel and quickly spread across the country, reflecting wider discontent over the rule of the same party since independence. (Photo by Vladimir Voronin/AP Photo) 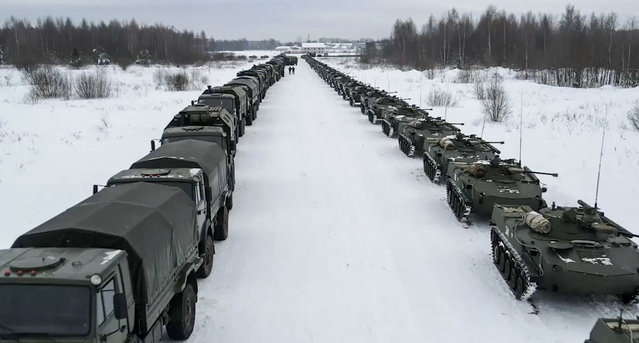 This handout image grab taken on January 6, 2022 and released on January 7, 2022 by the Russian Defence Ministry, shows an aerial view of Russian military vehicles waiting for loading to a military cargo plane to depart to Kazakhstan at the airport of Ivanovo. - A Moscow-led military alliance dispatched troops to help quell mounting unrest in Kazakhstan as police said dozens were killed trying to storm government buildings. Long seen as one the most stable of the ex-Soviet republics of Central Asia, energy-rich Kazakhstan is facing its biggest crisis in decades after days of protests over rising fuel prices escalated into widespread unrest. (Photo by Russian Defence Ministry/Handout via AFP Photo) 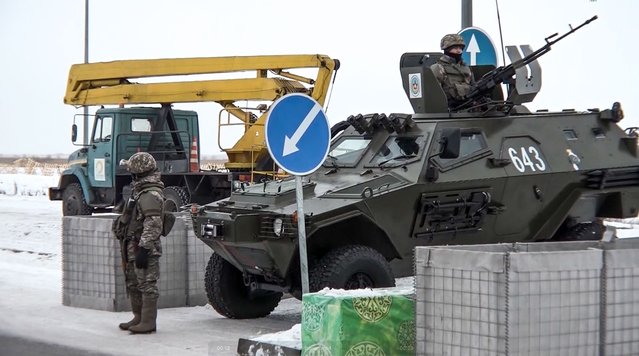 In this image taken from footage provided by the RU-RTR Russian television, A Kazakhstan's soldier stands next to a military vehicle at a check point in Kazakhstan, Friday, January 7, 2022. Over 70 cargo planes are being deployed in Russia's peacekeeping mission in Kazakhstan according to the Defense Ministry chief spokesman's briefing on Friday, after the worst street protests since the country gained independence three decades ago. The demonstrations began over a near-doubling of prices for a type of vehicle fuel and quickly spread across the country, reflecting wider discontent over the rule of the same party since independence. (Photo by RU-RTR Russian Television via AP Photo) 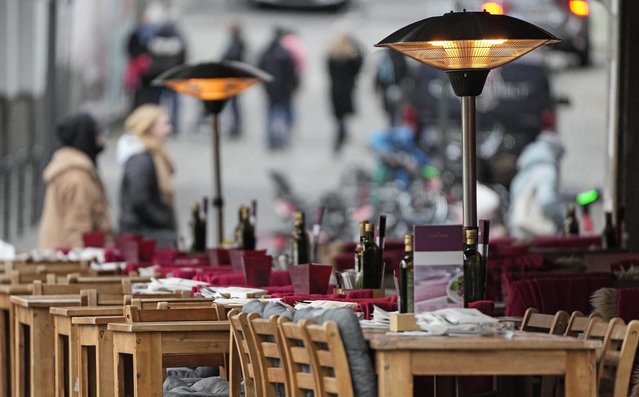 An empty restaurant waits for customers in Cologne, Germany, Friday, January 7, 2022. New corona measures are expected from a meeting of German governors and the federal government today to fight the COVID-19 pandemic. (Photo by Martin Meissner/AP Photo) 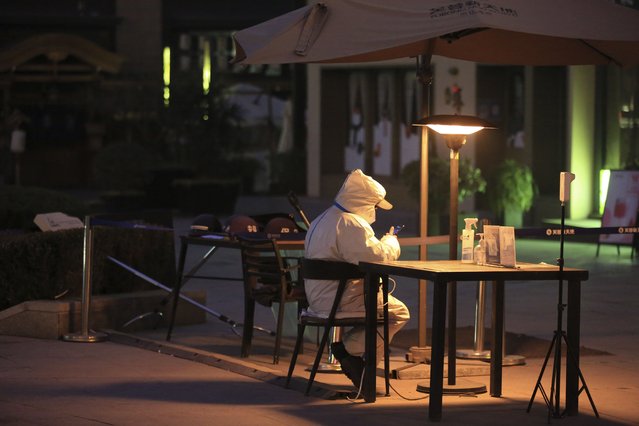 A person wearing protective equipment sits at the entrance to a shopping street in Xi'an in northwestern China's Shaanxi Province, Thursday, January 6, 2022. China's lockdown of big cities to fight coronavirus outbreaks is prompting concern about more disruptions to global industries after two makers of processor chips said their factories were affected. (Photo by Chinatopix via AP Photo) 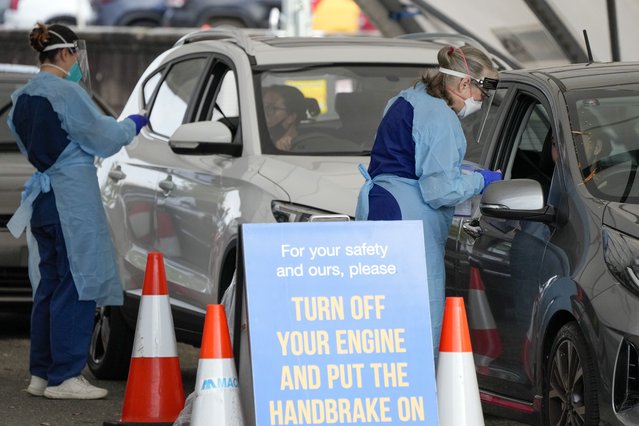 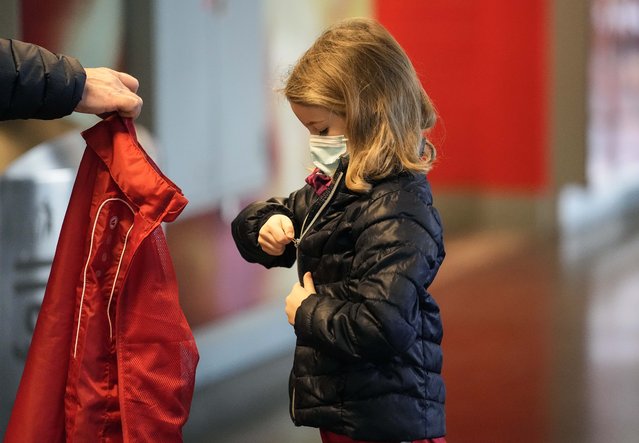 6-year old kid Lotte puts on her jacket after she received her second coronavirus vaccination against the COVID-19 disease at the Laxness-Arena in Cologne, Germany, Friday, January 7, 2022 where all participating children were rewarded for their vaccination. (Photo by Martin Meissner/AP Photo) 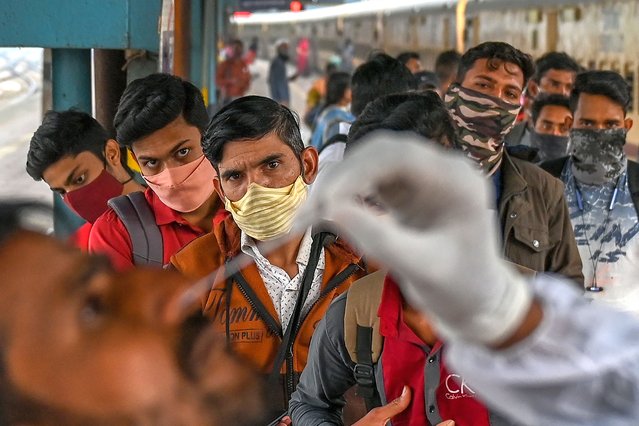 Passengers queue up as they watch a nasal swab sample being taken during a Covid-19 coronavirus screening after arriving at a railway platform on a long distance train, in Mumbai on January 7, 2022. (Photo by Punit Paranjpe/AFP Photo) 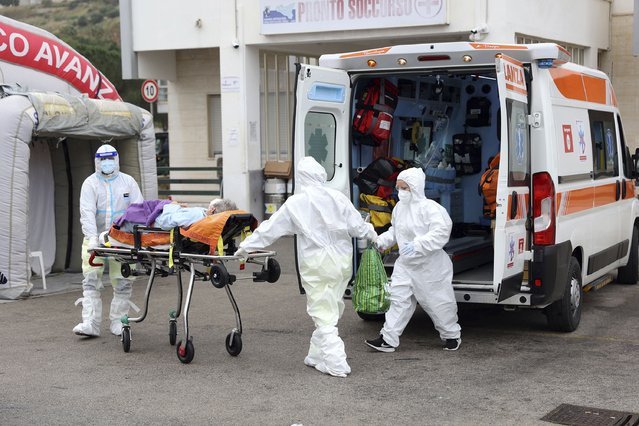 An ambulance for covid emergency unload a patient at the Cervello hospital in Palermo, Sicily, where tented field hospitals have been set up in front of three hospitals to relieve the pressure on the emergency room and allow ambulances to get their patients into a bed rather than wait in line in the parking lot, Friday, January 7, 2022. Sicily has seen its caseload double in recent days, from around 6,000 a day to 14,000 on Thursday, and has just under 1,000 people hospitalized with the virus. (Photo by Alberto Lo Bianco/LaPresse via AP Photo) 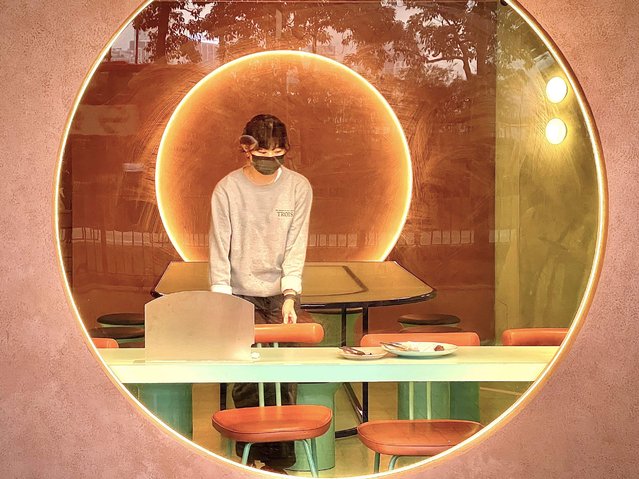 A cafe employee cleans a table after the last customers left, halting service after a 6pm restaurant curfew took effect in an attempt to fight Covid-19 and any spread of the new Omicron variant in Hong Kong on January 7, 2022. (Photo by Mladen Antonov/AFP Photo) 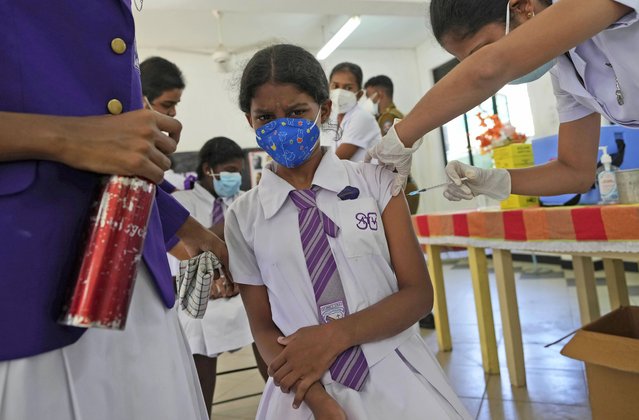 A Sri Lankan school student reacts as she receives her first COVID-19 vaccine from a health worker in Colombo, Sri Lanka, Friday, January 7, 2022. Sri Lankan health authorities starting to inoculate the children in the age group of 12 to 15 in it’s latest effort to contain the spreading of COVID-19 as the island nation’s top medical specialists warned of a massive wave of infection driven by the Omicron variant in the coming weeks. (Photo by Eranga Jayawardena/AP Photo) 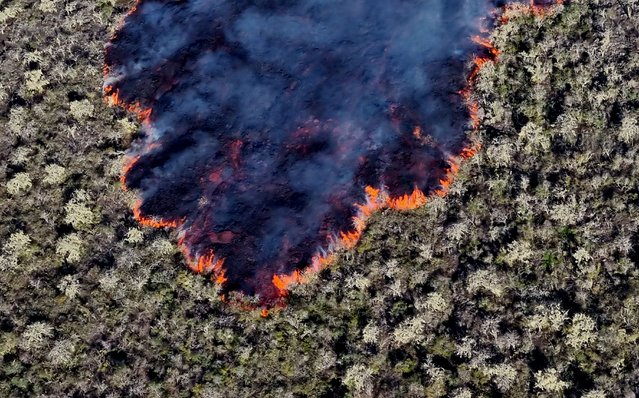 Handout picture released by the Galapagos National Park showing an aerial view of lava expelled by the Wolf Volcano after it erupted for the second time in seven years on January 7, 2022, on Isabela Island in the Galapagos Islands in the Pacific Ocean, 900 km off the Ecuadorean coast. The island is home to the critically endangered Galapagos pink land iguana. (Photo by Parque Nacional Galapagos/AFP Photo)

Journalist Mark Niu takes a selfie with Ameca, a humanoid robot by Engineered Arts, at the entrance to the UK Pavilion during CES 2022 in Las Vegas, Nevada, U.S. on January 6, 2022. (Photo by Steve Marcus/Reuters) 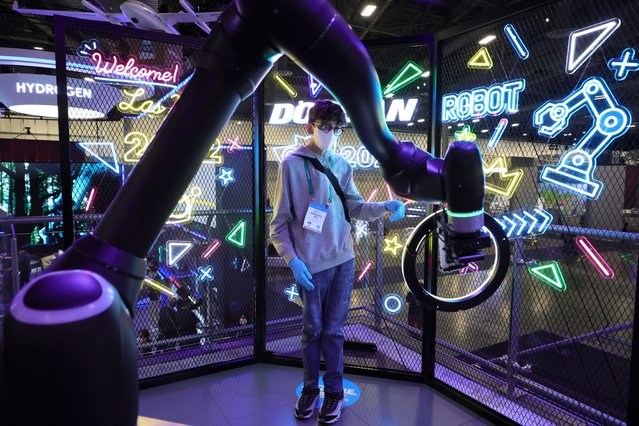 Seung Kyo Kim poses as the Doosan Robotics Inc. NINA, which stands for New Innovation New Angles, camera robot arm quickly moves his cell phone around him at CES 2022 at the Las Vegas Convention Center on January 6, 2022 in Las Vegas, Nevada. The USD 100,000, 163-pound programmable robot is designed to help people without robotics experience get professional cinematography results. The robot, which can be rented for USD 6,000, features 360-degree rotation while allowing users to swap out different cameras of up to about 55 pounds. CES, the world's largest annual consumer technology trade show, is being held in person through January 7, with some companies deciding to participate virtually only or canceling their attendance due to concerns over the major surge in COVID-19 cases. (Photo by Ethan Miller/Getty Images/AFP Photo) 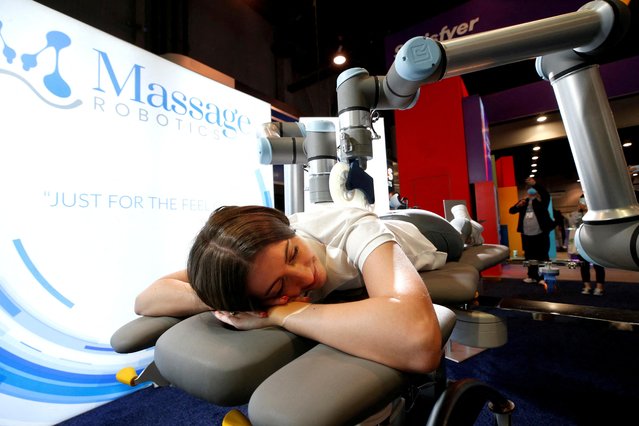 Kirsten Mackin gets a massage at the Massage Robotics booth during CES 2022 at the Las Vegas Convention Center in Las Vegas, Nevada, U.S. on January 6, 2022. (Photo by Steve Marcus/Reuters) 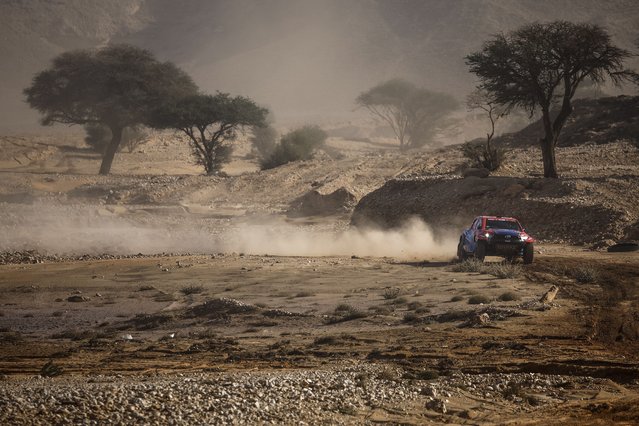 Spanish driver Lucio Alvarez and Spanish copilot Armand Monleon of Overdrive Toyota team in action during the stage 5 of the Rally Dakar 2022 between Riyadh and Riyadh, in Saudi Arabia, 07 January 2022. (Photo by Yoan Valat/EPA/EFE) 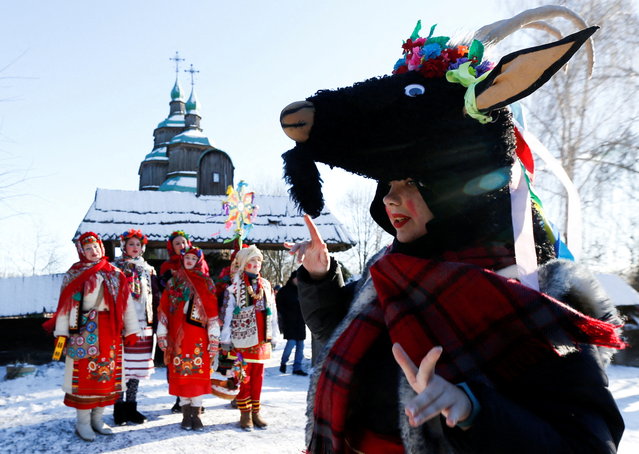 People dressed in traditional costumes sing Christmas carols as they gather to celebrate Orthodox Christmas at a compound of the National Architecture museum in Kyiv, Ukraine on January 7, 2022. (Photo by Valentyn Ogirenko/Reuters) 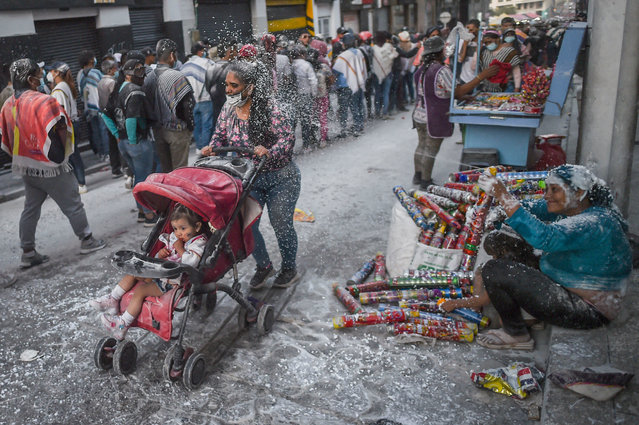 People play with powder and foam in the street during the Blacks and Whites' Carnival – the largest festivity in the south-western region of the country – in Pasto, Colombia, on January 6, 2022. The Blacks and Whites' Carnival, which has its origins in a mix of Andean, Amazonian and Pacific cultural expressions, is celebrated yearly and has been on UNESCO's list of intangible cultural heritage since 2009. (Photo by Joaquin Sarmiento/AFP Photo) 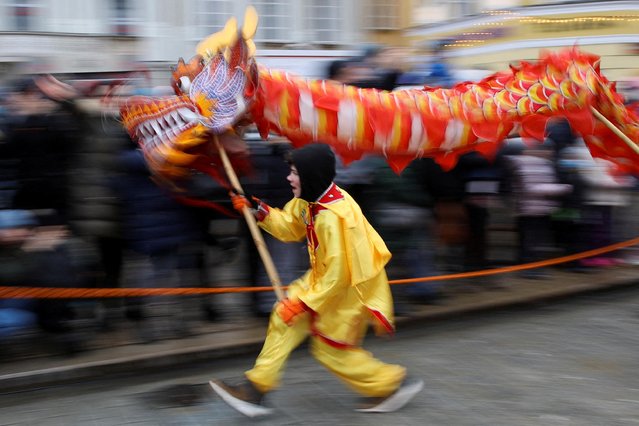