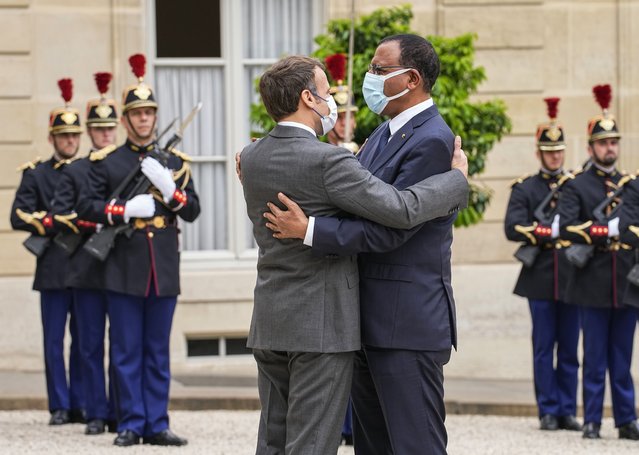 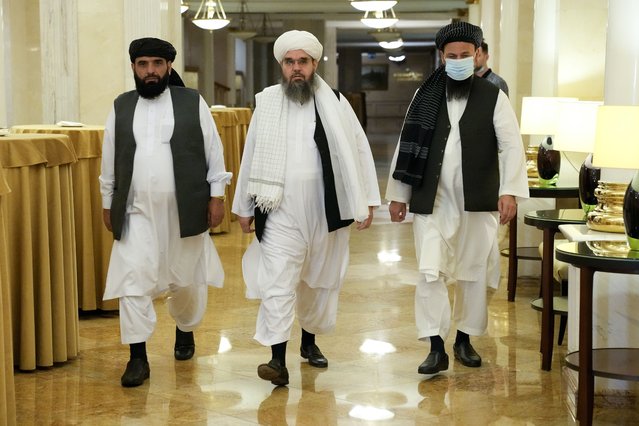 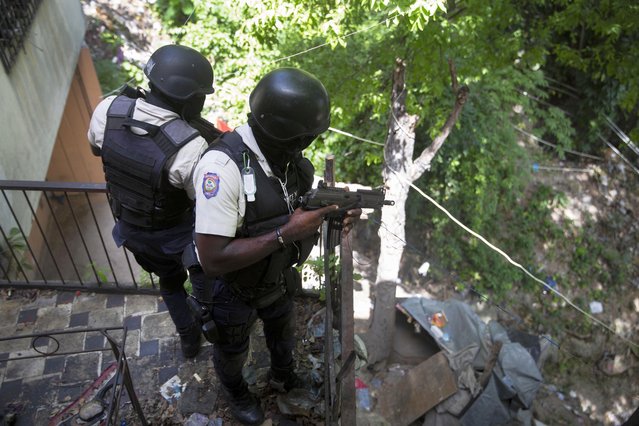 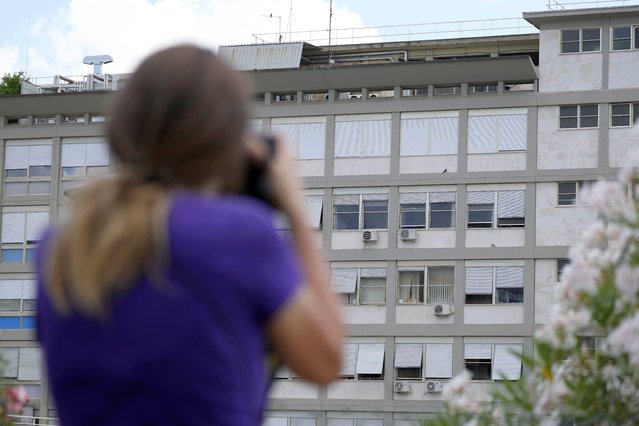 A press photographer aims her lens at the 10th floor of the Agostino Gemelli hospital, where Pope Francis was hospitalized Sunday, in Rome, Friday, July 9, 2021. The Vatican says Pope Francis is walking, working and has celebrated Mass at a Rome hospital where he also will deliver his Sunday weekly blessing while recovering from intestinal surgery. (Photo by Gregorio Borgia/AP Photo) 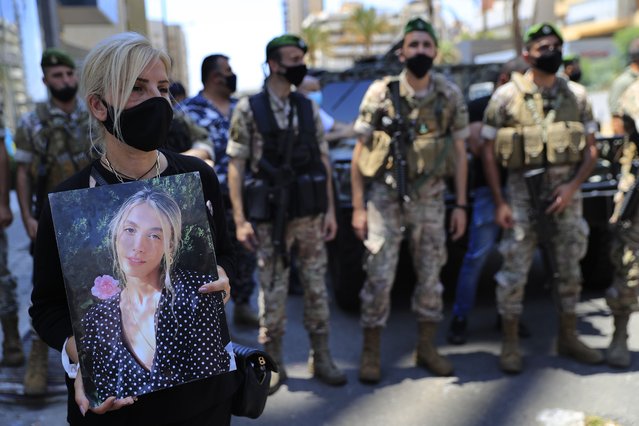 A woman holds a portrait of a victim who killed during the last year's massive blast at Beirut's seaport, protest near the tightly-secured residents of parliament speaker Nabih Berri, in Beirut, Lebanon, Friday, July 9, 2021. The protest came after last week's decision by the judge to pursue senior politicians and former and current security chiefs in the case, and requested permission for their prosecution. (Photo by Hussein Malla/AP Photo) 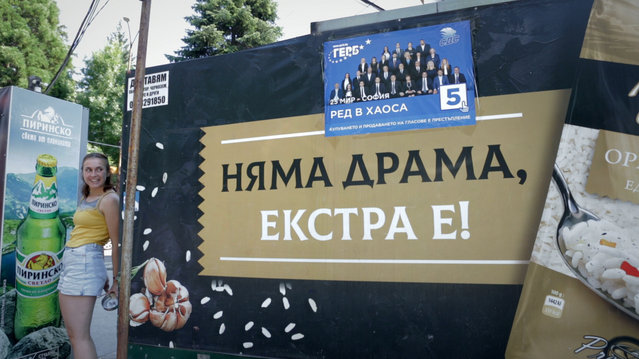 A woman smiles as she stands at an open-air shop with an election poster of former Prime Minister Borissov's GERB political party, on display, in Bankya, Bulgaria, Wednesday, July 7, 2021. Voters are going to the polls in Bulgaria for the second time in three months this weekend after no party secured enough support in an April 2021 parliamentary election to form a government. Former three-time Prime Minister Boyko Borissov’s GERB party performed best in the inconclusive election, but it received only 26 percent of the vote. Polls suggest a neck-to-neck race between Borissov’s party and its main rival, the anti-elite There is Such a People, which is led by popular TV entertainer Slavi Trifonov. (Photo by Valentina Petrova/AP Photo) 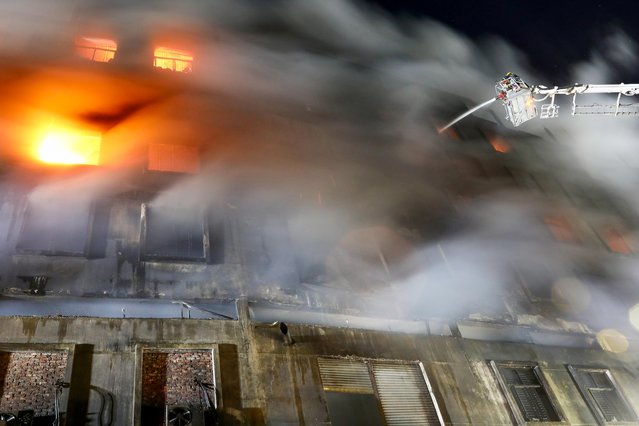 Firefighters work at the scene of a fire that broke out at a factory named Hashem Foods Ltd. in Rupganj of Narayanganj district, on the outskirts of Dhaka, Bangladesh, July 9, 2021. At least 52 people died in a huge blaze that engulfed a food and beverage factory outside Bangladesh's capital, fire officials said Friday, in the latest industrial disaster to hit the South Asian nation. (Photo by Mohammad Ponir Hossain/Reuters) 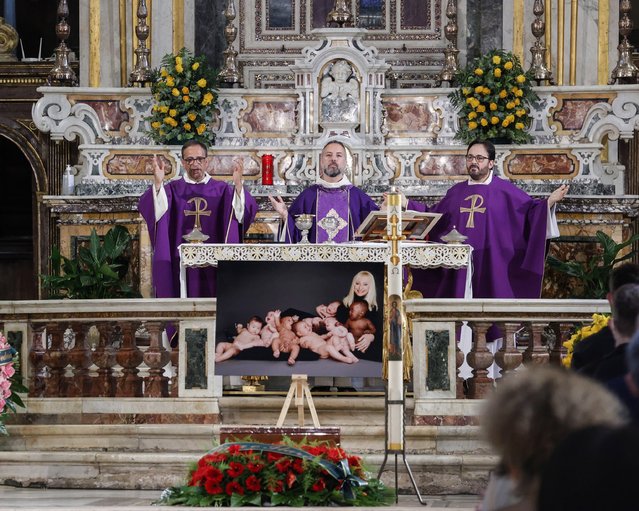 A view of the funeral service for Raffaella Carra in the basilica of Santa Maria in Ara Coeli, in Rome, Italy, 09 July 2021. Italian TV icon and entertainment legend Raffaella Carra died on 05 July 2021 at the age of 78. (Photo by Giuseppe Lami/EPA/EFE) 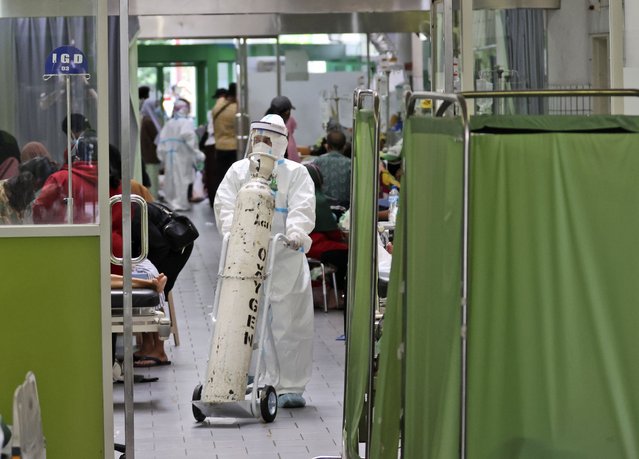 A paramedic pushes an oxygen tank at the emergency ward of an overcrowded hospital amid COVID-19 cases, in Surabaya, East Java, Indonesia, Friday, July 9, 2021. The world's fourth most populous country is running out of oxygen as it endures a devastating wave of coronavirus cases and the government is seeking emergency supplies from other countries, including Singapore and China. (Photo by Trisnadi/AP Photo) 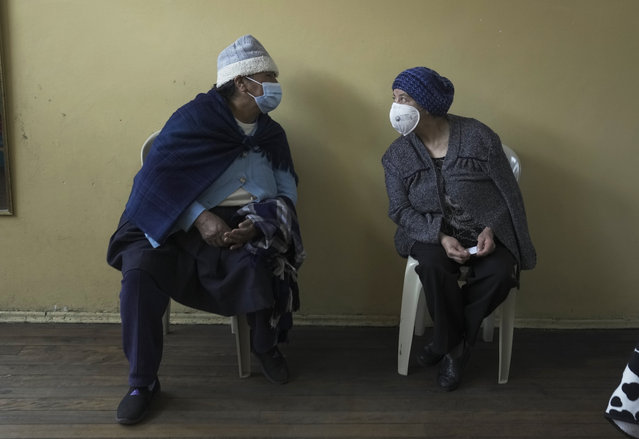 Women visit with eachother as they wait for a shot of the COVID-19 vaccine in Pillaro, Ecuador, Thursday, July 8, 2021. (Photo by Dolores Ochoa/AP Photo) 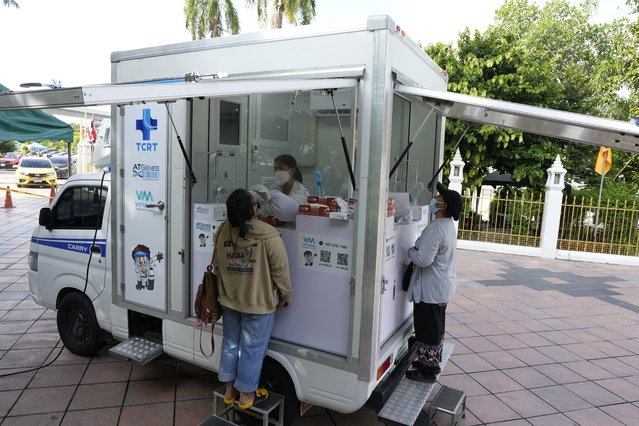 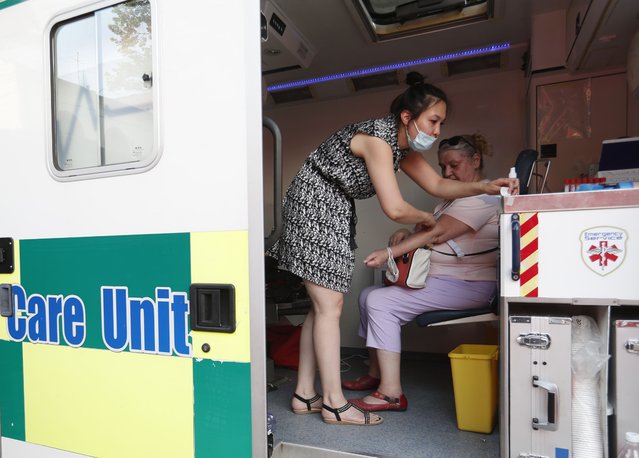 A staff member takes blood for an antibody test in Budapest, Thursday, July 8, 2021. Hungary's capital city is offering free antibody testing to its elderly residents, a bid to pressure the central government to take action over concerns that certain COVID-19 vaccines do not provide adequate protection against the virus. (Photo by Laszlo Balogh/AP Photo) 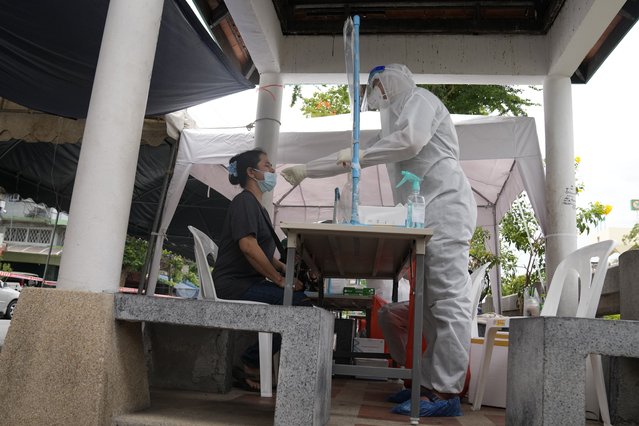 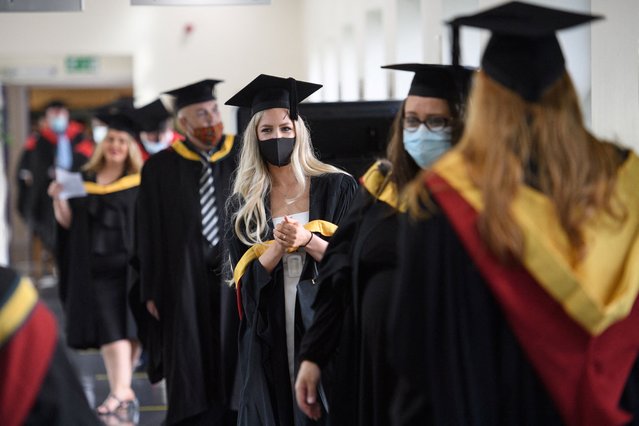 Graduates queue on campus at the University of Bolton as they wait to receive their degree certificates in a Covid-safe, in-person graduation ceremony one of a handful taking place this year due to the coronavirus lockdown restrictions in Bolton, northwest England on July 9, 2021. Over 7,000 students will take part in the graduation ceremony over the course of a week. (Photo by Oli Scarff/AFP Photo) 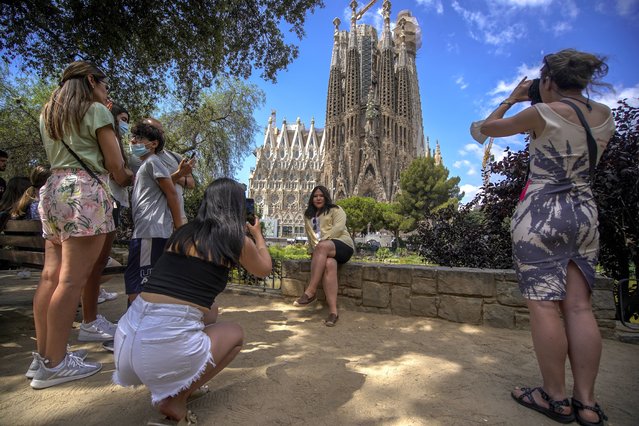 People take pictures in front of Sagrada Familia Basilica designed by architect Antoni Gaudi in Barcelona, Spain, Friday, July 9, 2021. Spain's top diplomat is pushing back against French cautions over vacationing on the Iberian peninsula. Southern Europe's holiday hotspots worry that repeated changes to rules on who can visit is putting people off travel. On Thursday, France's secretary of state for European affairs, Clement Beaune, advised people to “avoid Spain and Portugal as destinations” when booking their holidays because COVID-19 infections are surging there. (Photo by Joan Mateu/AP Photo) 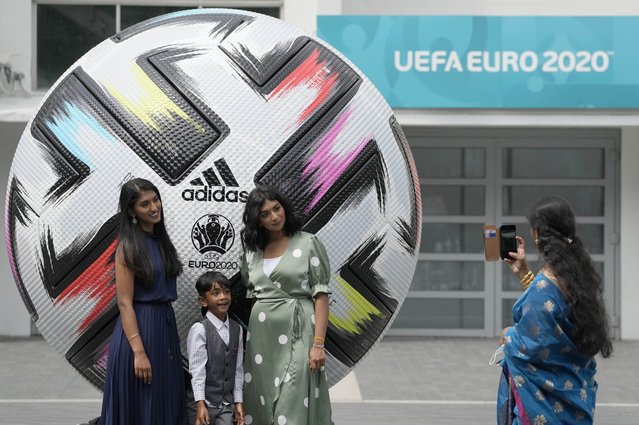 People take photographs beside a large football outside of Wembley stadium in London, Friday, July 9, 2021. The Euro 2020 soccer championship final match between Italy and England will be played at Wembley stadium on Sunday. (Photo by Frank Augstein/AP Photo) 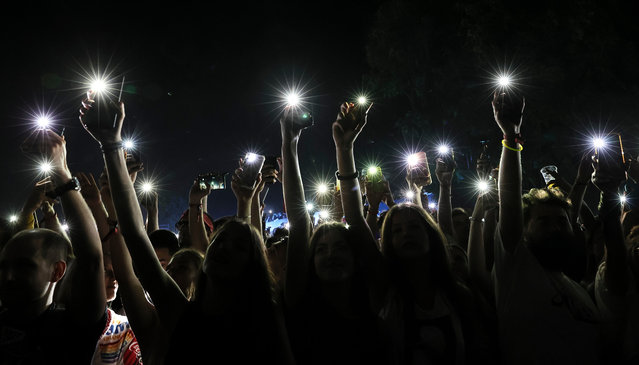 Festival goers enjoyed in performance of DJ Sama' Abdulhadi of Palestine during the Day Two of the Exit music festival at Petrovaradin Fortress on July 9, 2021 in Novi Sad, Serbia. (Photo by Srdjan Stevanovic/Getty Images) 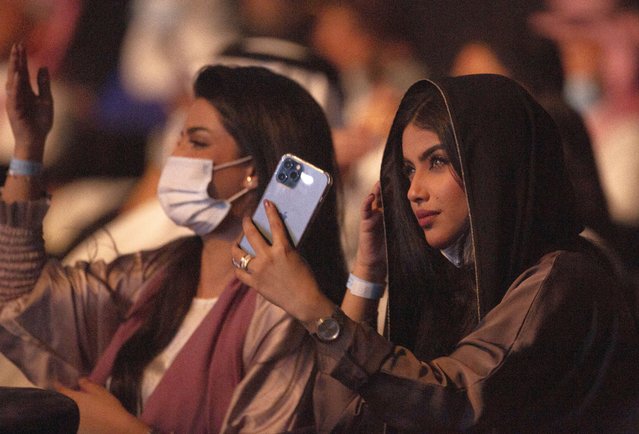 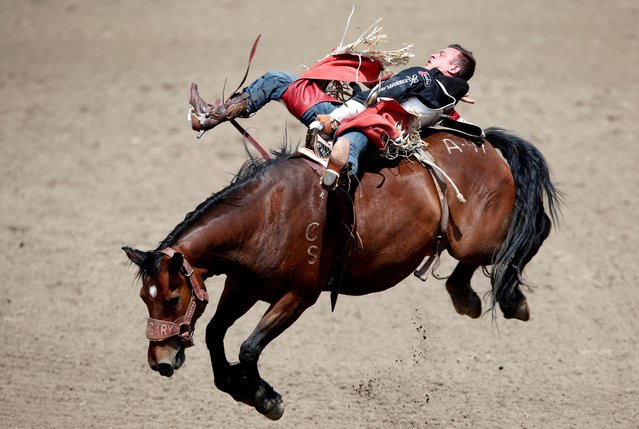 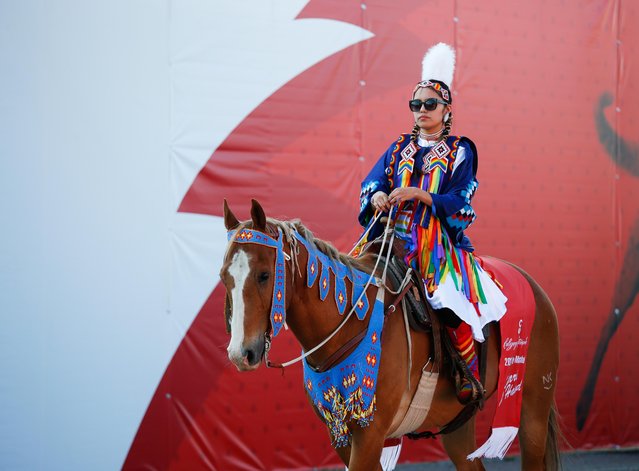 Parade marshall Katari Right Hand rides her horse in the parade as the Calgary Stampede gets underway following a year off due to the coronavirus disease (COVID-19) restrictions, in Calgary, Alberta, Canada on July 9, 2021. (Photo by Todd Korol/Reuters) 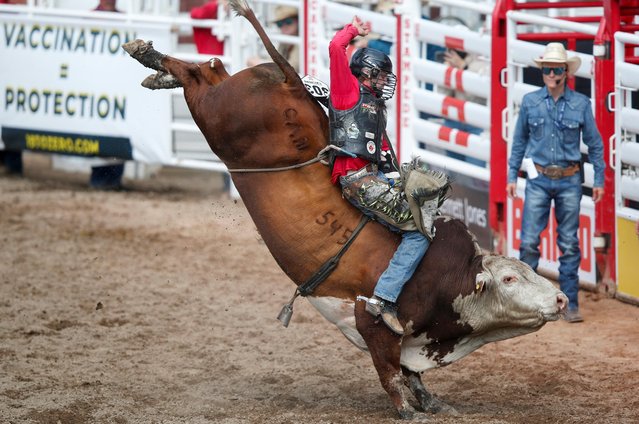