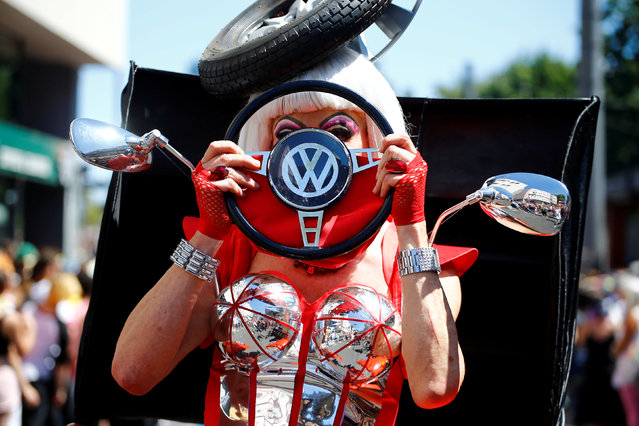 A reveller wearing a costume made out of pieces from a Volkswagen Beetle car takes part in the annual Christopher Street Day gay pride parade in Cologne, Germany July 8, 2018. (Photo by Wolfgang Rattay/Reuters) 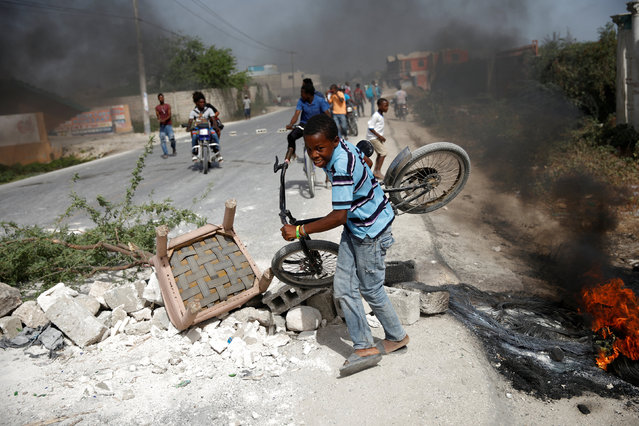 A boy carrying his bicycle passes through a barricade on the outskirts of Croix-des-Bouquets, Haiti, July 8, 2018. (Photo by Andres Martinez Casares/Reuters) 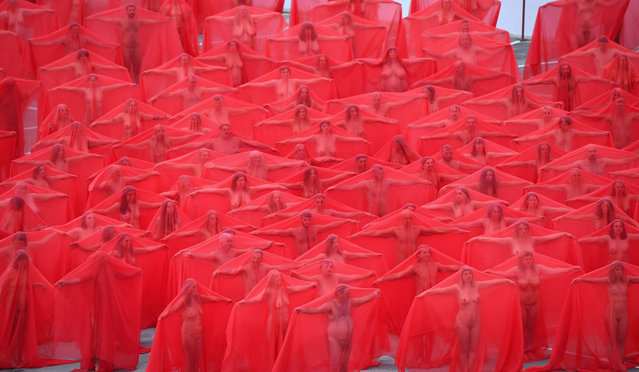 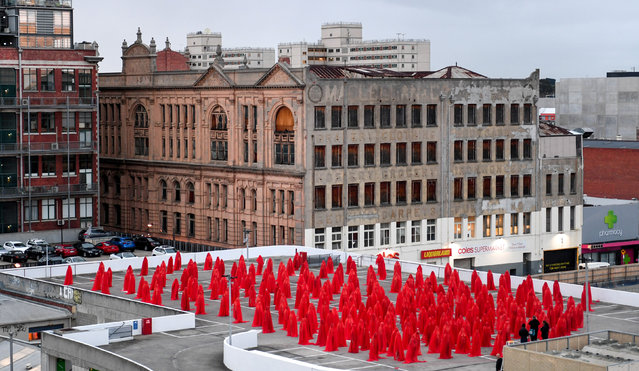 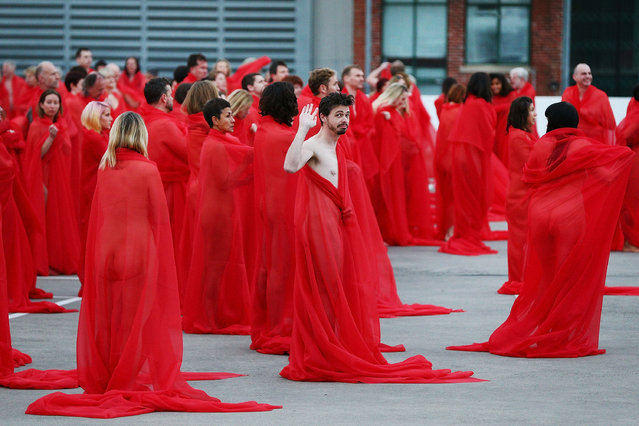 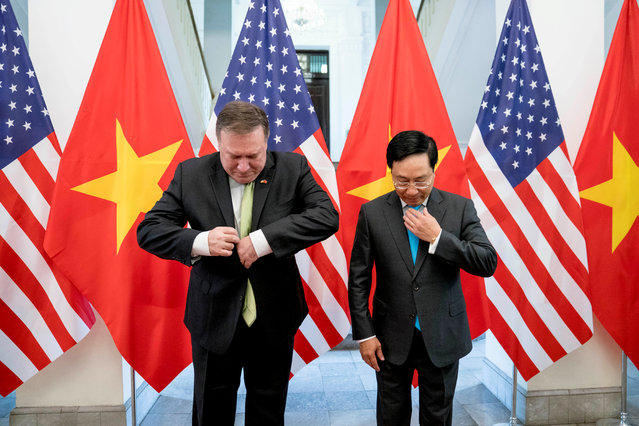 U.S. Secretary of State Mike Pompeo and Vietnamese Deputy Prime Minister and Foreign Minister Pham Binh Minh arrive for a photo opportunity before a meeting at the Ministry of Foreign Affairs in Hanoi, Vietnam on July 9, 2018. (Photo by Andrew Harnik/Reuters) 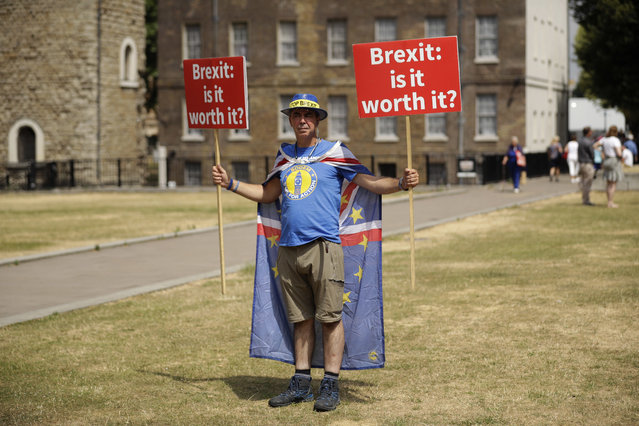 Anti-Brexit, pro-EU supporter Steve Bray holds placards on Abingdon Green across the road from the Houses of Parliament in London, Monday, July 9, 2018. Former U.K. Brexit Secretary David Davis said Monday that he won't seek to challenge Prime Minister Theresa May's leadership after resigning from her Cabinet, but will aim to pressure her to toughen her position on Britain's departure from the European Union. (Photo by Matt Dunham/AP Photo) 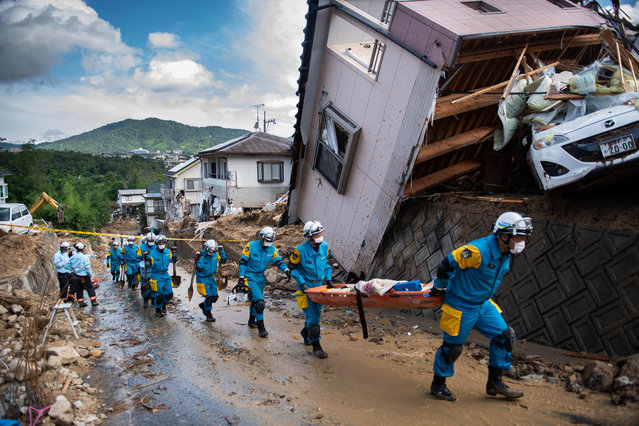 Police arrive to clear debris scattered on a street in a flood hit area in Kumano, Hiroshima prefecture on July 9, 2018. Rescue workers in Japan battled on July 9 to reach residents trapped after devastating rains that have killed at least 75 people, as authorities warned about the risk of landslides. (Photo by Martin Bureau/AFP Photo) 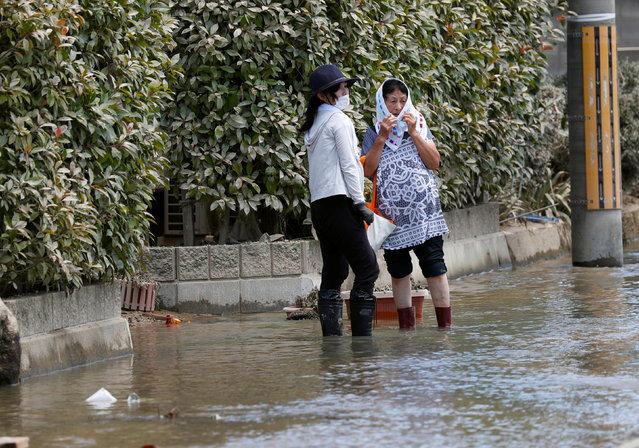 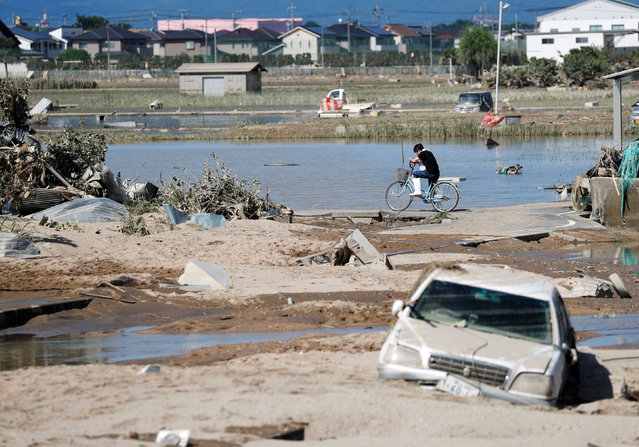 A local resident is seen in a flooded area in Mabi town in Kurashiki, Okayama Prefecture, Japan, July 9, 2018. (Photo by Issei Kato/Reuters) 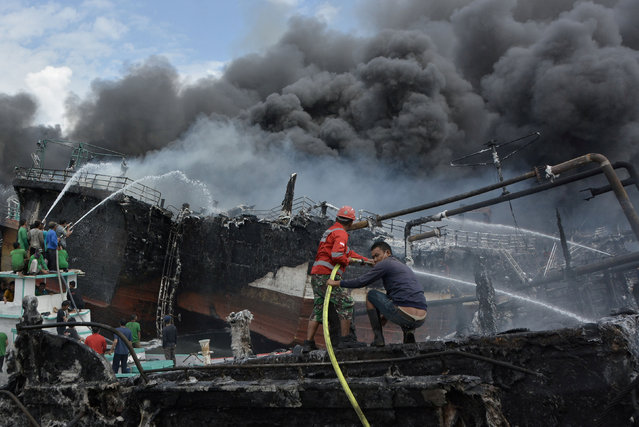 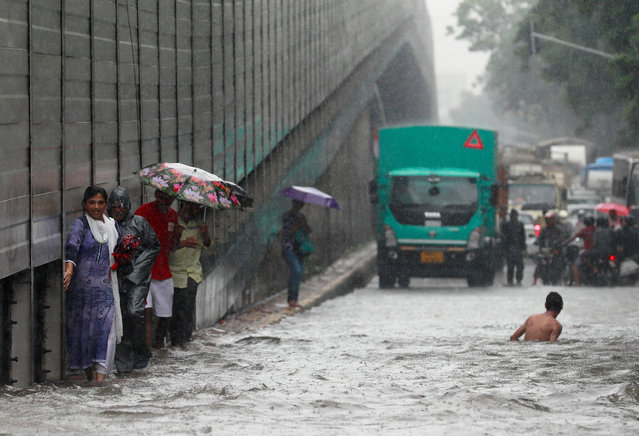 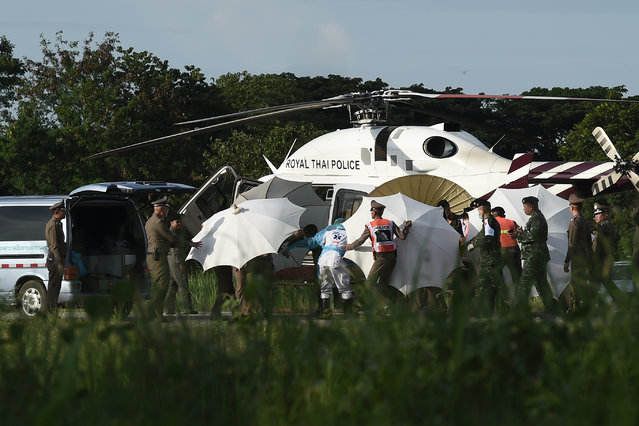 Police and military personnel use umbrellas to cover around a stretcher near a helicopter and an ambulance at a military airport in Chiang Rai on July 9, 2018, as rescue operations continue for those still trapped inside the cave in Khun Nam Nang Non Forest Park in the Mae Sai district. Four boys among the group of 13 trapped in a flooded Thai cave for more than a fortnight were rescued on July 8 after surviving a treacherous escape, raising hopes elite divers would also save the others soon. (Photo by Lillian Suwanrumpha/AFP Photo) 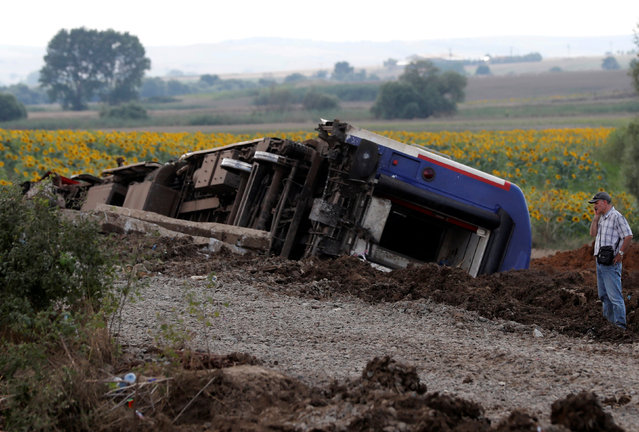 A man talks on his mobile phone at the scene where a passenger train derailed on Sunday, near Corlu in Tekirdag province, Turkey July 9, 2018. (Photo by Osman Orsal/Reuters) 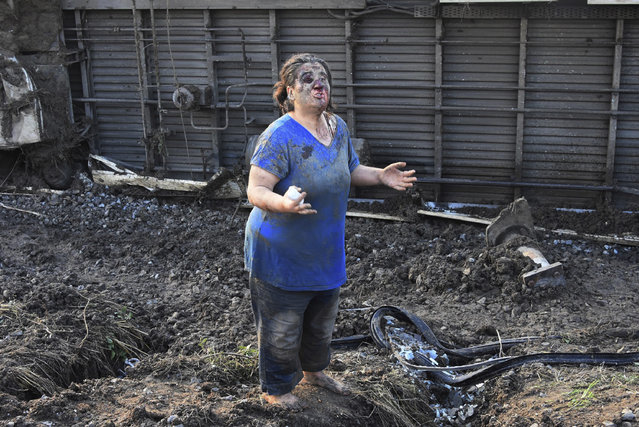 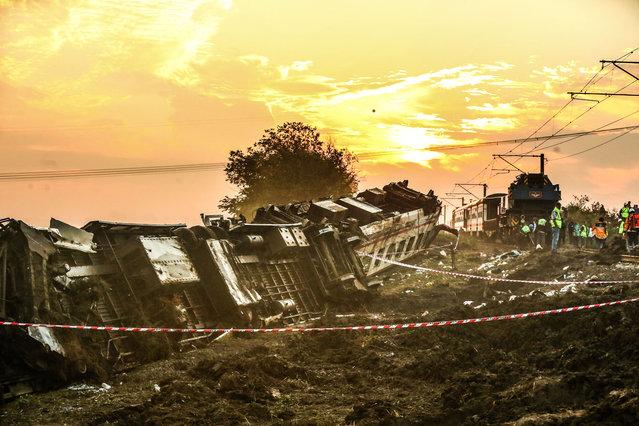 Officials work at the scene after several bogies of a passenger train derailed at the Sarilar village of Tekirdags Corlu district on July 09, 2018. The train, carrying 362 passengers and six train staff, was traveling from Edirne province to Istanbul when five bogies derailed near Sarilar village of Tekirdags Corlu district. 24 people were killed in the incident. (Photo by Berk Ozkan/Anadolu Agency/Getty Images) 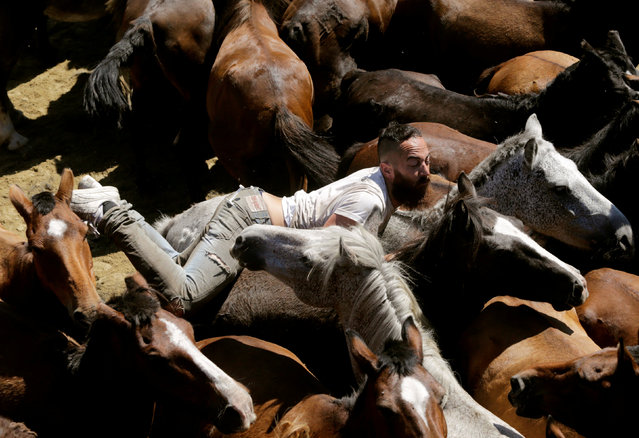 A reveller tries to hold on to a wild horse during the “Rapa das Bestas” traditional event in the village of Sabucedo, northwestern Spain July 9, 2018. (Photo by Miguel Vidal/Reuters) 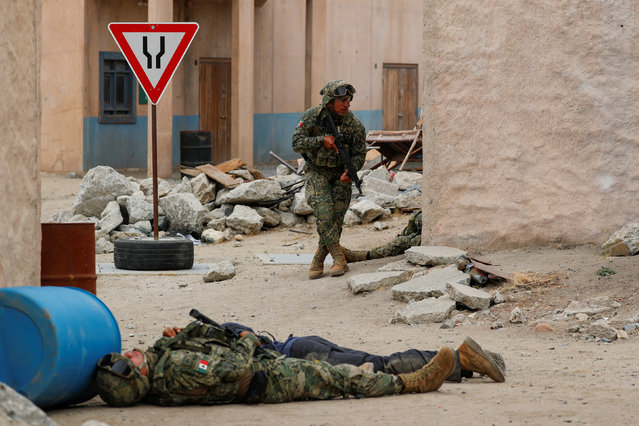 Mexican Marines conduct operations with U.S. Marines in urban terrain as they train side-by-side during a Rim of the Pacific Exercise (RIMPAC) at Camp Pendleton, California, U.S. July 9, 2018. (Photo by Mike Blake/Reuters) 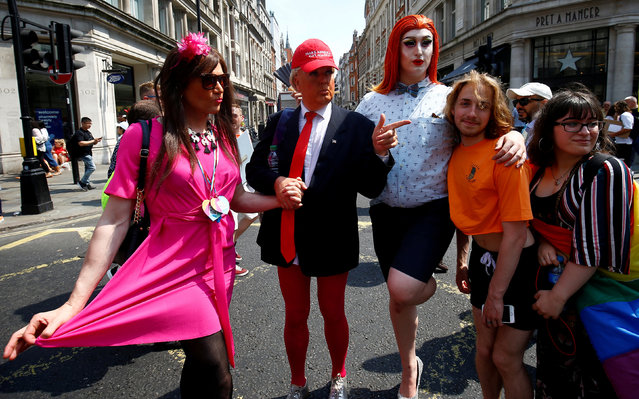 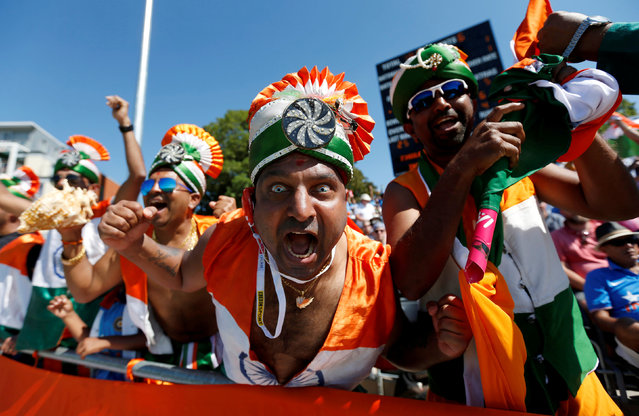 Indian cricket fans at the Brightside Ground for the England vs India third international T20 match in Bristol, Britain on July 8, 2018. (Photo by Ed Sykes/Action Images via Reuters) 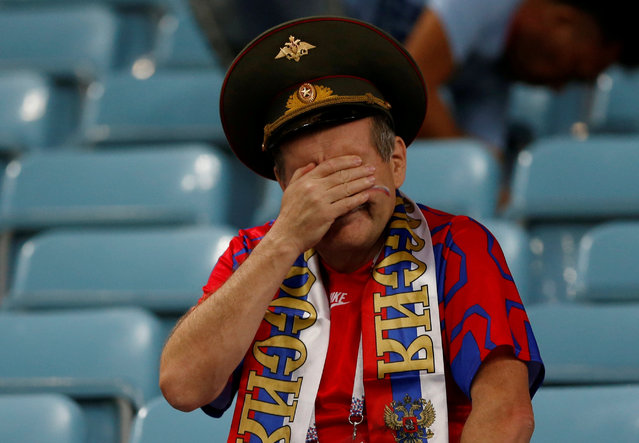 Russia fan looks dejected at the end of the Russia 2018 World Cup quarter- final football match between Russia and Croatia at the Fisht Stadium in Sochi on July 7, 2018. (Photo by Carl Recine/Reuters) 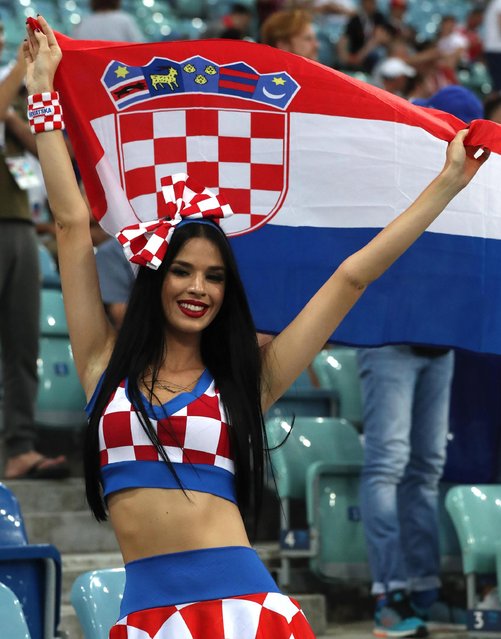 A Croatian fan reacts in the quarterfinal match against Russia during the 2018 FIFA World Cup in Sochi, Russia, 7 July 2018. (Photo by Alamy Live News) 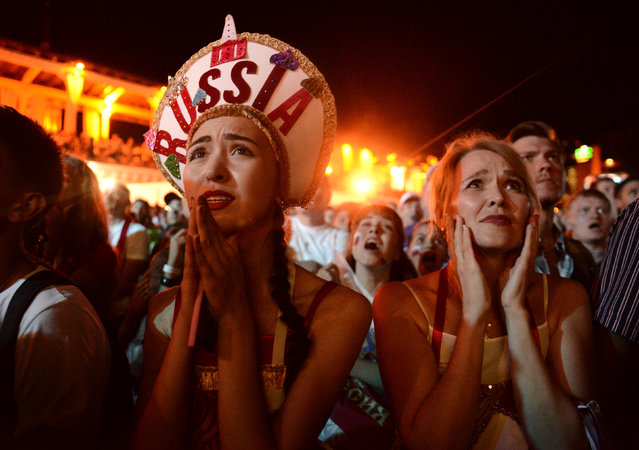 Russia fans during the Russia 2018 World Cup quarter- final football match between Russia and Croatia at the Fisht Stadium in Sochi on July 7, 2018. (Photo by Evgeny Reutov/Reuters) 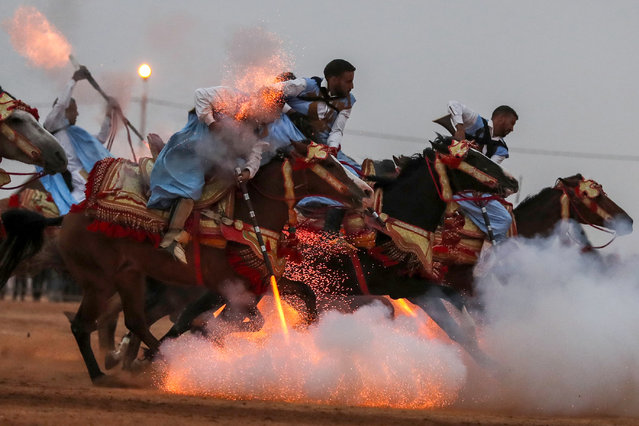 Horsemen ride in a choreographed cavalry charge in a fantasia during the 14th Tan-Tan Moussem Berber festival on July 8, 2018 in the western Moroccan desert town of Tan-Tan. The festival, which is recognised by UNESCO as a “Masterpiece of the Oral and Intangible Heritage of Humanity”, is organised every year to promote local traditions and brings together nomadic tribes from northern Africa. (Photo by Karim Sahib/AFP Photo) 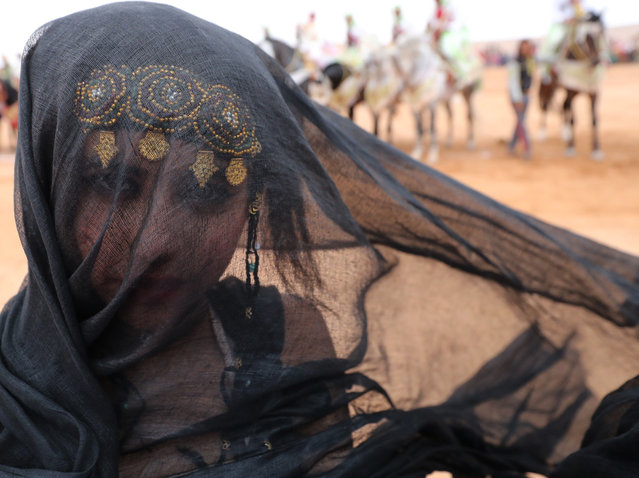 A Moroccan woman from the southern desert, wearing a traditional outfit, participates in the 14 th Tan- Tan Moussem Berber festival on July 08, 2018 in the western desert town of Tan- Tan. The festival, which is recognised by UNESCO as a “Masterpiece of the Oral and Intangible Heritage of Humanity”, is organised every year to promote local traditions and brings together nomadic tribes from northern Africa. (Photo by Karim Sahib/AFP Photo) 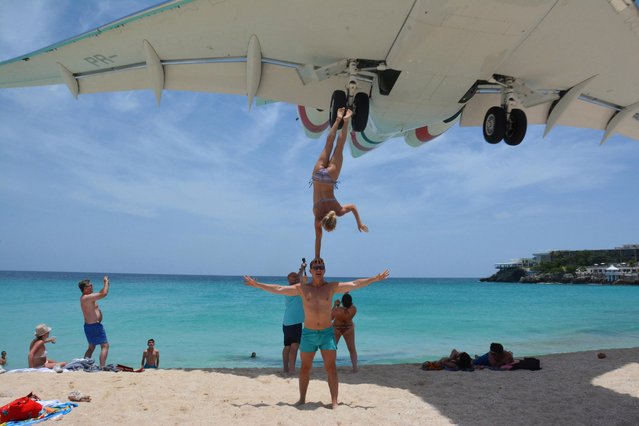 A commercial airline landing at the Princess Juliana International Airport in St Maarten on July 9, 2018. Ukrainians Oleg Kolisnichenko, 36, and Yulia Nos, 25, have been blasted for the “stupid stunt” on Maho Beach, which lies next to the main airport on the Caribbean island of Saint Martin. The stunt was met with criticism rather than praise from social media users. (Photo by SWNS: South West News Service)
Edit Del
11 Jul 2018 07:23:00, post received 0 comments
Publication archive:
←   →
Popular tags:
All tags
Last searches: