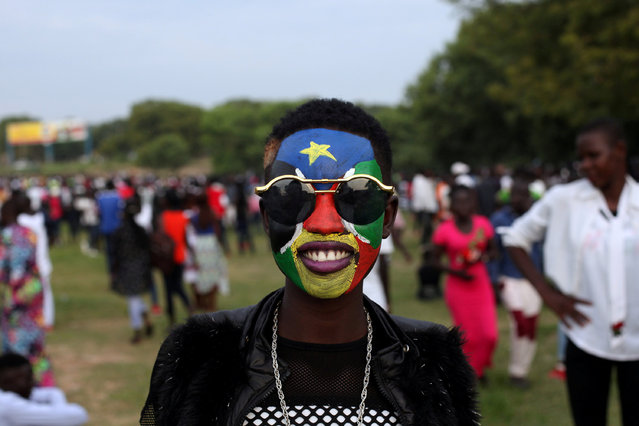 A South Sudanese girl with the national flag painted on her face poses for a portrait at the Nyakuron Cultural Center in Juba, South Sudan July 9, 2018. (Photo by Andreea Campeanu/Reuters) 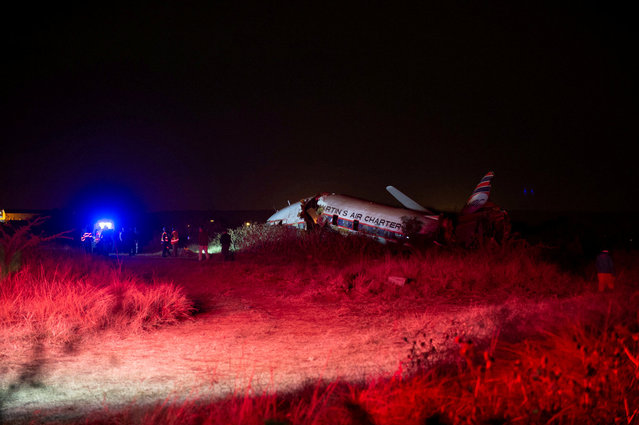 Emergency Services attend the scene of a plane crash outside South Africa's capital Pretoria, South Africa, July 10,2018. Nineteen people were injured when a plane crashed on July 10, in a grassy area of the South African capital Pretoria, emergency services said, giving a preliminary toll. “Medics from ER24 and other services are at the scene of a plane crash at Wonderboom in Pretoria”, Russell Meiring, spokesman for the ER24 medical service said. “We have 19 injured casualties ranging from minor to critical injuries at this stage and no confirmed fatalities”. (Photo by Yeshiel Panchia/Reuters) 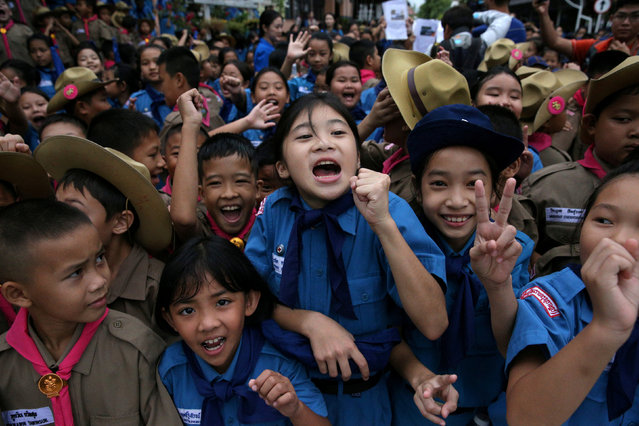 Students celebrate in front of Chiang Rai Prachanukroh hospital, where the 12 soccer players and their coach rescued from the Tham Luang cave complex are being treated, in the northern province of Chiang Rai, Thailand, July 11, 2018. (Photo by Athit Perawongmetha/Reuters) 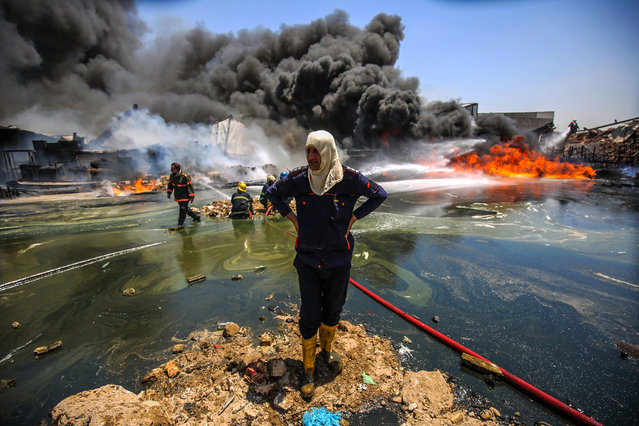 An Iraqi firefighter gazes during a blaze as comrades attempt to put out a fire that broke out due to extreme summer temperatures in a warehouses near Palestine Street in the capital Baghdad on July 10, 2018. The warehouses contained wood stocks, engine oils, pigments, and vehicle spare parts according to the civil defence. (Photo by Ahmad Al-Rubaye/AFP Photo) 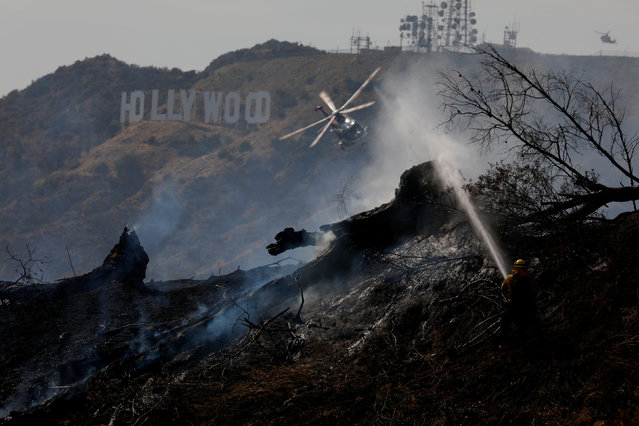 Firefighters work on a fire near the landmark Griffith Observatory in the hills overlooking the Hollywood sign in Los Angeles, California, U.S. July 10, 2018. (Photo by Patrick T. Fallon/Reuters) 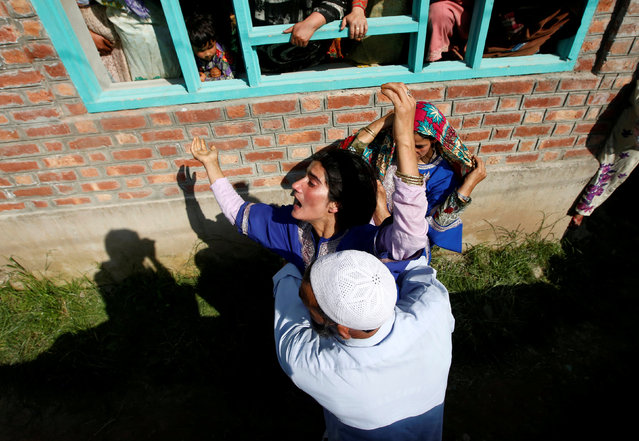 A man tries to console a woman as she watches the body of Tamsheel Ahmad Khan, a civilian who according to local media died during clashes between protesters and Indian security forces, during his funeral at Vehil village in Kashmir's Shopian district, July 10, 2018. (Photo by Danish Ismail/Reuters) 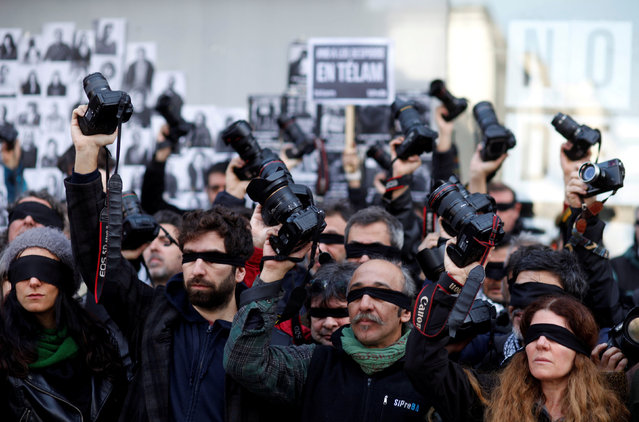 Photojournalists from Argentina' s national press photographers association ARGRA hold up their cameras and shout slogans outside Telam, a national news agency, to protest the layoffs of some 350 Telam journalists who are now occupying the agency' s headquarters, in Buenos Aires, Argentina, Wednesday, July 11, 2018. About 40 percent of the agency' s employees were let go in June. (Photo by Martin Acosta/Reuters) 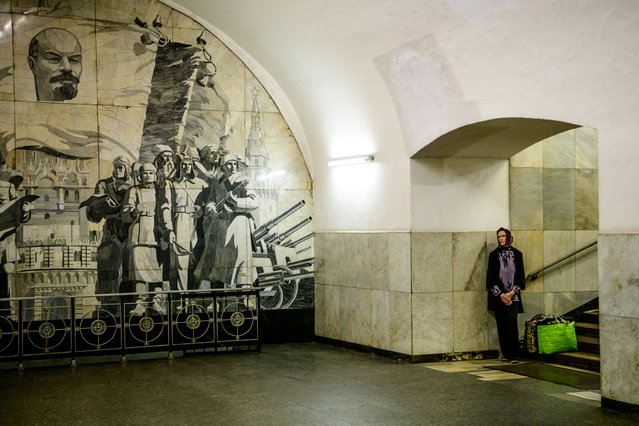 A commuter listens to a musician in the metro on July 9, 2018 in Moscow, Russia. (Photo by Mladen Antonov/AFP Photo) 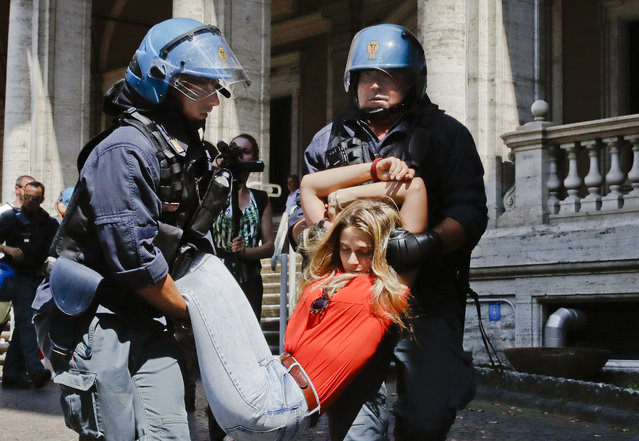 A protester is dragged away by Italian police outside the Ministry of Transport in Rome, Wednesday, July 11, 2018. Dozens of protesters chained themselves to the steps in a demonstration against the government's hard-line immigration policy. (Photo by Alessandra Tarantino/AP Photo) 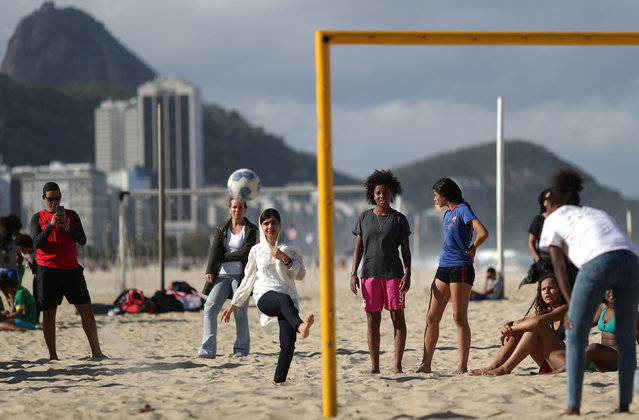 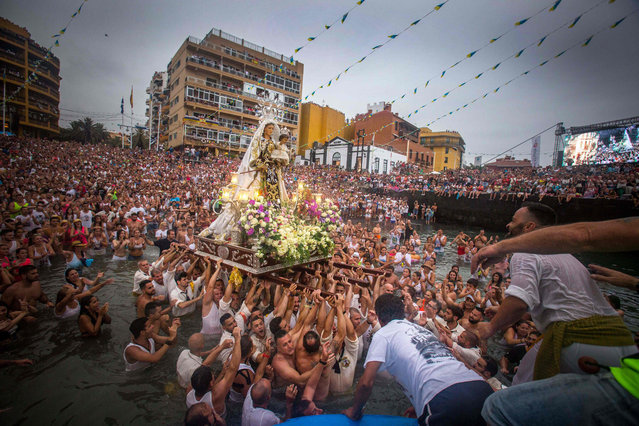 Carriers of the Great God Power brotherhood unload Virgin del Carmen statue after its journey at the Puerto de la Cruz on the Spanish Canary island of Tenerife on July 10, 2018. Every year, local residents of the resort carry the statue of the Virgin from its chapel to a small beach in the fishing habour. Once at the beach, the fishermen put the statue on board a decorated boat and the statue sails along the coast. (Photo by Desiree Martin/AFP Photo) 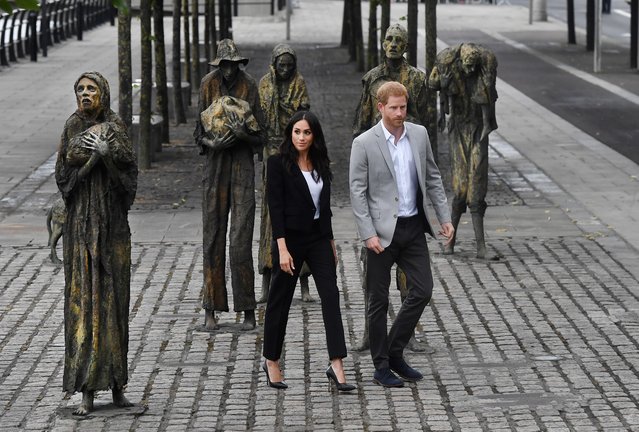 Prince Harry, Duke of Sussex and Meghan, Duchess of Sussex visit the Famine Memorial at Custom House Quay on the second day of their official two day royal visit to Ireland on July 11, 2018 in Dublin, Ireland. The statues commemorate the Great Famine of the mid 19th century, during which a million people died and a million more emigrated. It is the royal couple's first foreign trip together since they were married earlier this year. (Photo by Charles McQuillan/Getty Images) 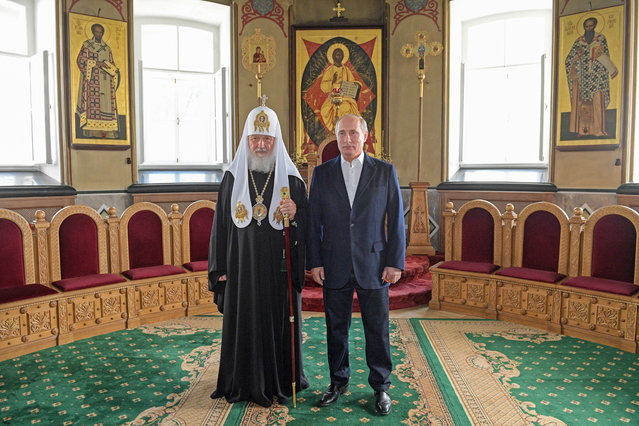 Patriarch Kirill (L) of Moscow and All Russia and Russia' s President Vladimir Putin at the Transfiguration of the Saviour Cathedral at the Valaam Monastery on the commemoration day of Saints Sergius and Herman, founders of the monastery in Karelia Republic, Russia on July 11, 2018. (Photo by Alexei Druzhinin/TASS) 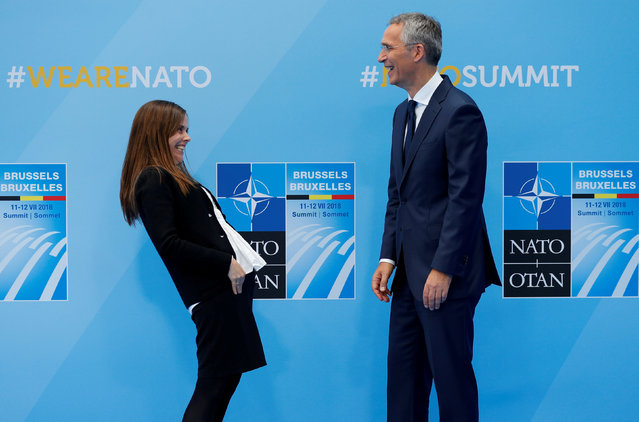 Iceland's Prime Minister Katrin Jakobsdottir is welcomed by NATO Secretary-General Jens Stoltenberg at the start of a NATO summit at the Alliance’s headquarters in Brussels, Belgium July 11, 2018. (Photo by Paul Hanna/Reuters) 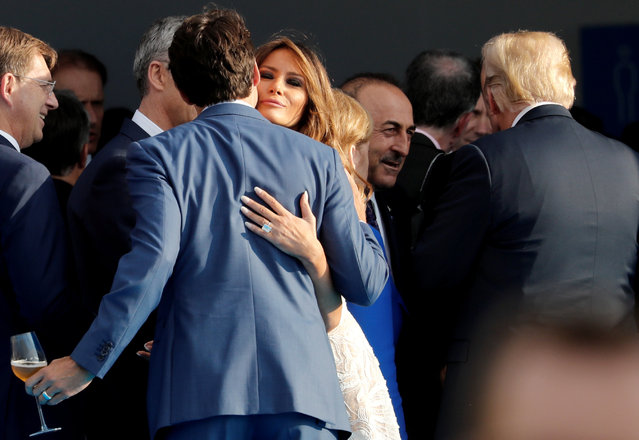 U.S. first lady Melania Trump kisses Canada's Prime Minister Justin Trudeau as they arrive at the park of the Cinquantenaire, during a NATO Summit, in central Brussels, Belgium July 11, 2018. (Photo by Yves Herman/Reuters) 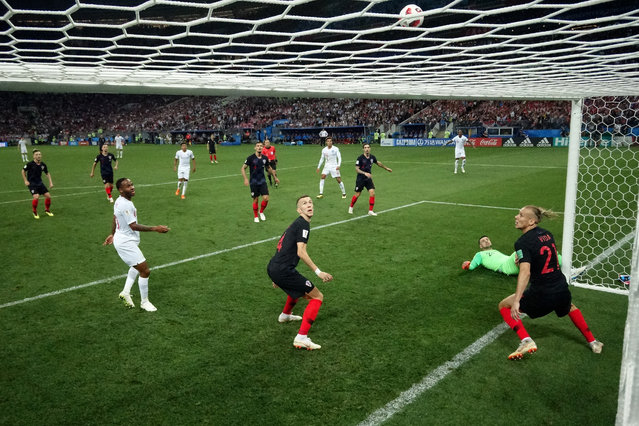 Croatia players watch as a Harry Kane of England shot goes over the cross bar during the 2018 FIFA World Cup Russia Semi Final match between England and Croatia at Luzhniki Stadium on July 11, 2018 in Moscow, Russia. (Photo by Michael Heiman – FIFA/FIFA via Getty Images) 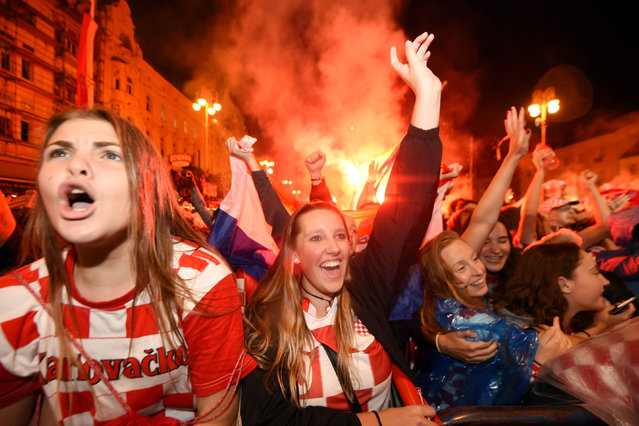 Croatia' s supporters celebrate after a goal as they watch on a giant screen the Russia 2018 World Cup semi- final football match between Croatia and England, at the main square in Zagreb on July 11, 2018. (Photo by Denis Lovrovic/AFP Photo) 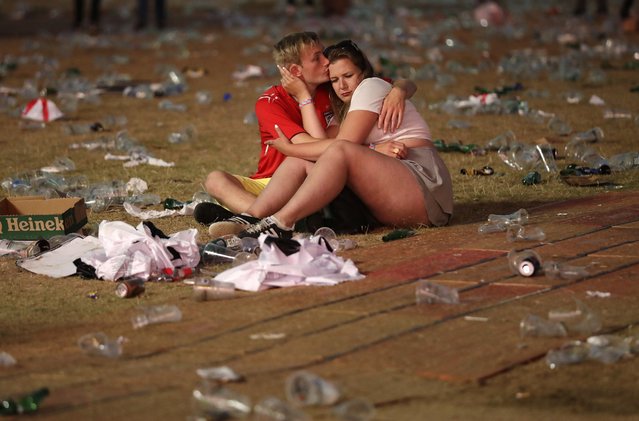 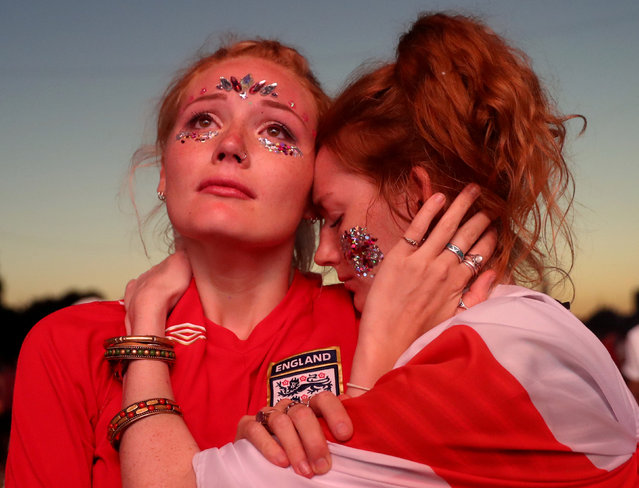 England supporters react at an outdoor screening in Hyde Park in central London as England lose the 2018 World Cup semi- final against Croatia in Moscow on July 11, 2018. (Photo by Simon Dawson/Reuters) 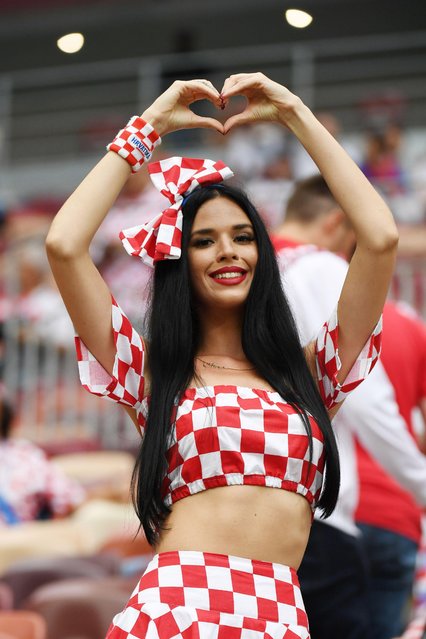 A Croatia fan poses before the Russia 2018 World Cup semi- final football match between Croatia and England at the Luzhniki Stadium in Moscow on July 11, 2018. (Photo by Yuri Cortez/AFP Photo) 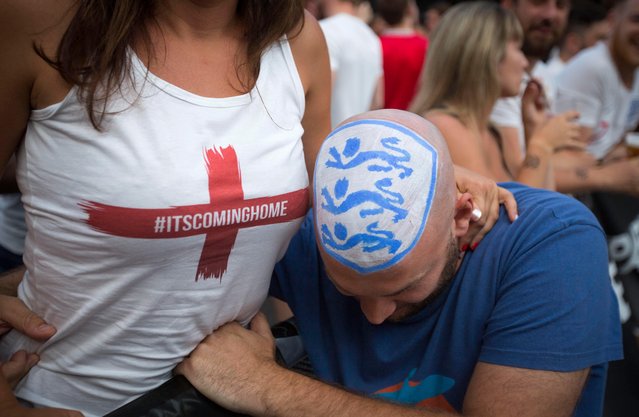 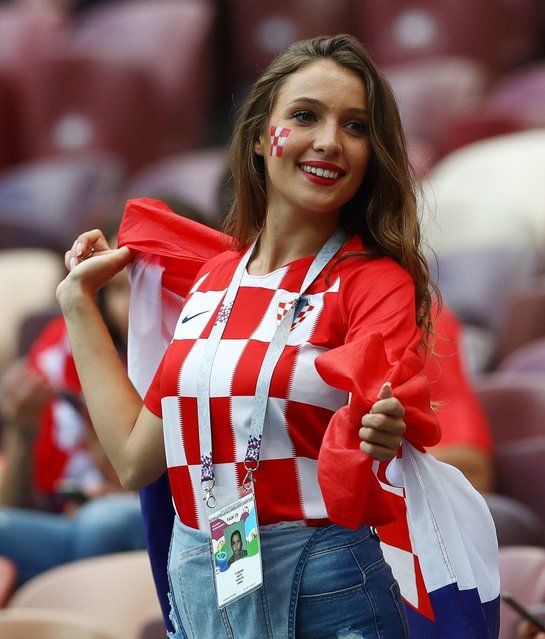 A Croatia fan poses before the Russia 2018 World Cup semi- final football match between Croatia and England at the Luzhniki Stadium in Moscow on July 11, 2018. (Photo by Kieran McManus/BPI/Rex Features/Shutterstock) 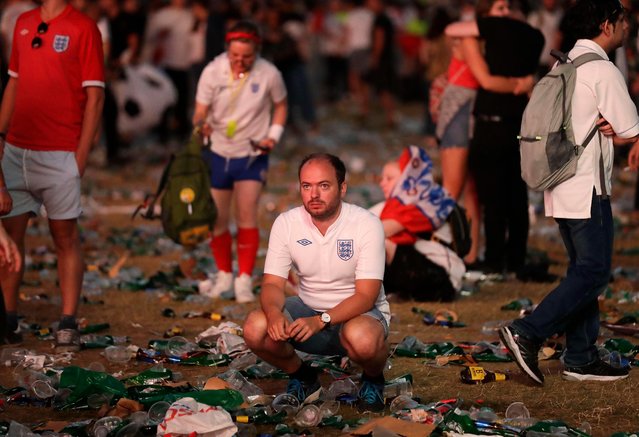