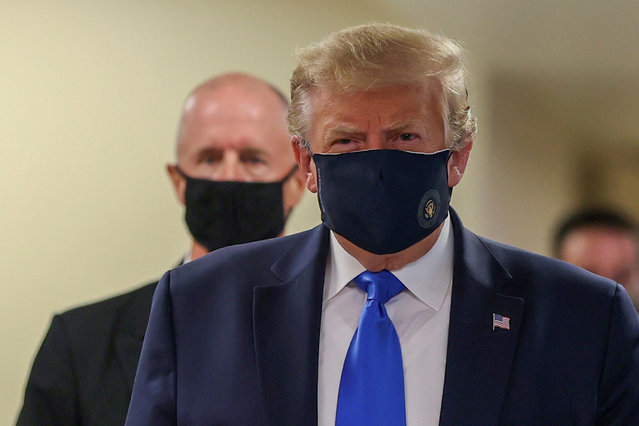 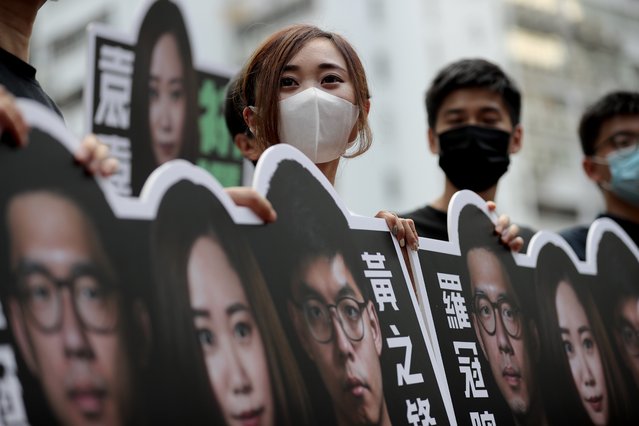 Tiffany Yuen, a candidate of Hong Kong Island Constituency, campaigns during a primary election in Hong Kong on July 11, 2020. Pro-democracy parties in Hong Kong held primary polls on July 11 to choose candidates for upcoming legislative elections despite warnings from government officials that it may be in breach of a new security law imposed by China. (Photo by May James/AFP Photo) 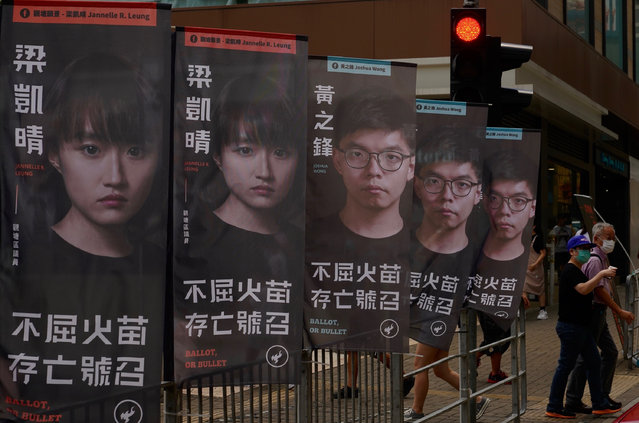 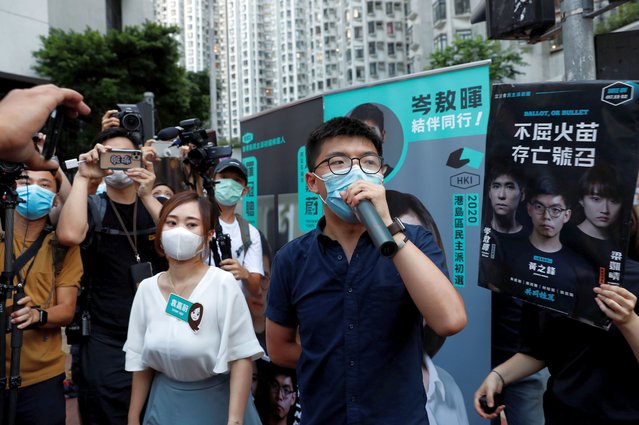 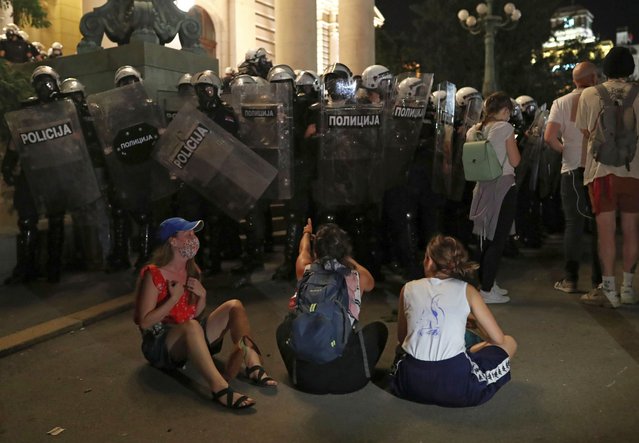 Riot police stand in formation as demonstrators gather during an anti-government protest amid the spread of the coronavirus disease (COVID-19), outside the parliament building in Belgrade, Serbia, July 10, 2020. (Photo by Marko Djurica/Reuters) 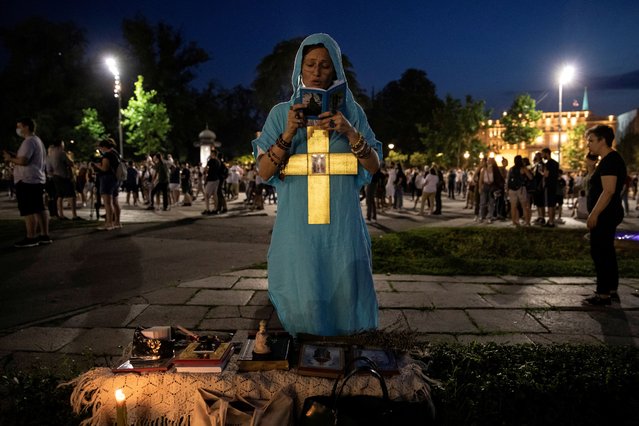 A woman reads a religious book during an anti-government rally, amid the spread of the coronavirus disease (COVID-19), in front of the parliament building in Belgrade, Serbia, July 11, 2020. (Photo by Marko Djurica/Reuters) 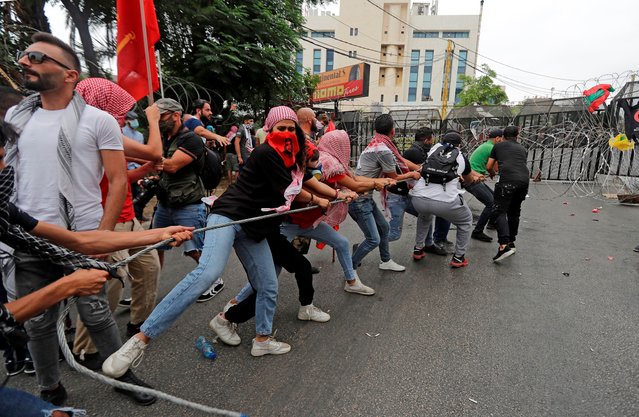 Protesters pull barbed-wire closing off a street during an anti-US demonstration near the United States' Embassy headquarters in Awkar, northeast of Lebanon's capital Beirut on July 10, 2020, with the flags of Lebanese Shiite movement Hezbollah, the Popular Nasserist Organisation, and portraits of late Egyptian president Gamal Abdel Nasser littering the barbed-wire. (Photo by Joseph Eid/AFP Photo) 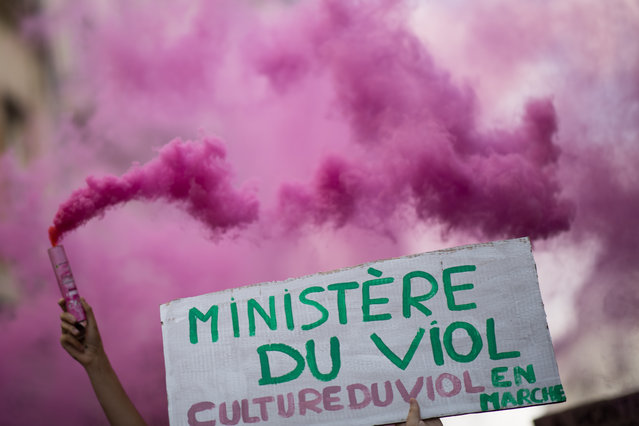 A protester holds a sign reading “Ministry of rape” as another lights a pink flare during a demonstration called by feminist movements in Nantes, western France, on July 10, 2020, to denounce the nomination of French Interior Minister, facing rape accusations and French Justice Minister who criticised the #MeToo movement against sexual harassment. (Photo by Loic Venance/AFP Photo) 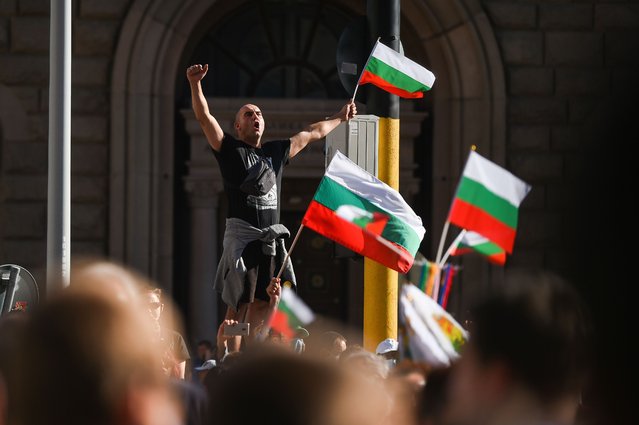 Protestors shout slogans and wave Bulgarian national flags during an anti-government protest in Sofia, on July 11, 2020. The Bulgarian President called on July 11, 2020 for the resignation of the government and the chief prosecutor after clashes between demonstrators and police left at least five injured and lead to around twenty arrests. (Photo by Nikolay Doychinov/AFP Photo) 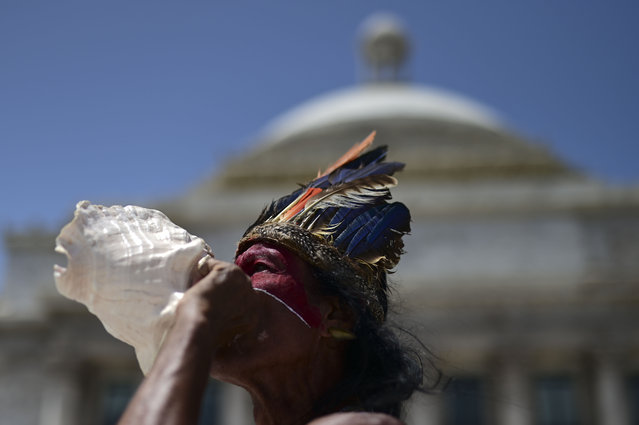 Baracutey blows on a conch shell outside the Capitol building while joining a group of activists demanding statues and street names commemorating symbols of colonial oppression be removed, in San Juan, Puerto Rico, Saturday, July 11, 2020. Dozens of activists marched through the historic part of Puerto Rico’s capital on Saturday to demand that the U.S. territory’s government start by removing statues, including those of explorer Christopher Columbus. (Photo by Carlos Giusti/AP Photo) 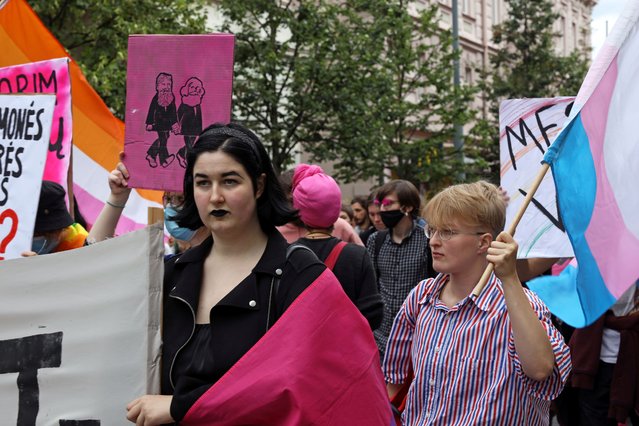 People march in a pared-down LGBT Pride parade protesting against lack of recognition for transgender people in Vilnius, Lithuania on July 11, 2020. (Photo by Andrius Sytas/Reuters) 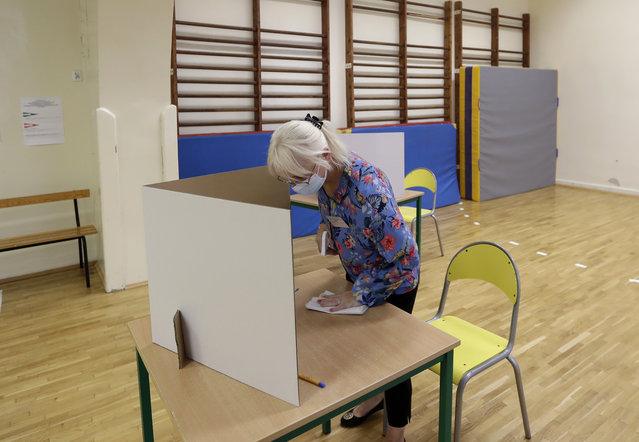 A member of the election committee cleans a table during the presidential runoff election in Krakow, Poland, Sunday, July 12, 2020. Polish President Andrzej Duda and Warsaw Mayor Rafal Trzaskowski are heading into a tight presidential runoff that is seen as an important test for populism in Europe. The Sunday, July 12 election comes after a bitter campaign that has exacerbated a conservative-liberal divide in the country. (Photo by Petr David Josek/AP Photo) 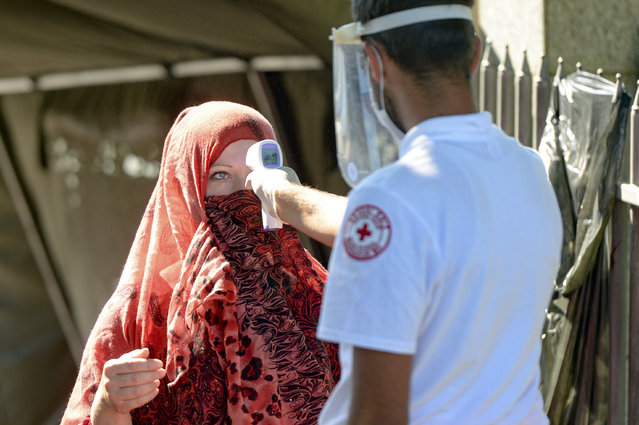 A health worker measures the temperature of a woman before granting her access to the memorial cemetery in Potocari, near Srebrenica, Bosnia, Saturday, July 11, 2020. Nine newly found and identified men and boys were laid to rest as Bosnians commemorate 25 years since more than 8,000 Bosnian Muslims perished in 10 days of slaughter, after Srebrenica was overrun by Bosnian Serb forces during the closing months of the country's 1992-95 fratricidal war, in Europe's worst post-WWII massacre. (Photo by Kemal Softic/AP Photo) 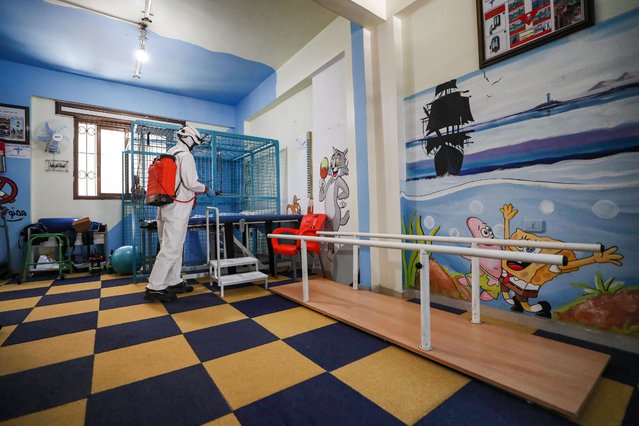 A member of the Syrian Civil Defence, also known as the “White Helmets” disinfects a room at a physiotherapy centre in Syria's rebel-held northwestern city of Idlib, on July 11, 2020. A first case of coronavirus was recorded in northwest Syria on July 9, an opposition official said, reviving fears of disaster if the pandemic reached the rebel bastion's displacement camps. (Photo by Omar Haj Kadour/AFP Photo) 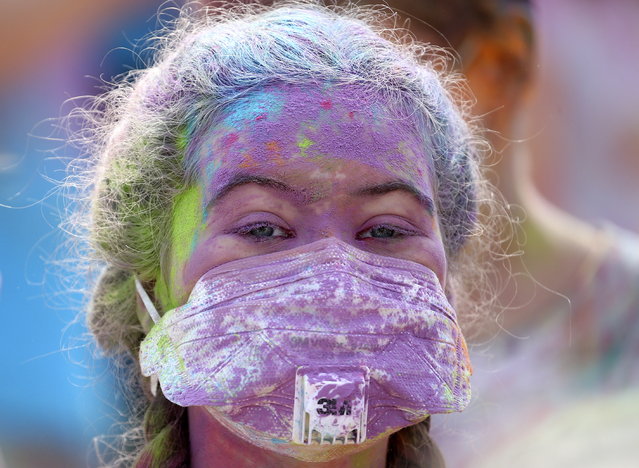 A wears a face mask during the ColorFest festival of colors held at the Dreamland amusement park in Minsk, Belarus on July 11, 2020. (Photo by Natalia Fedosenko/TASS) 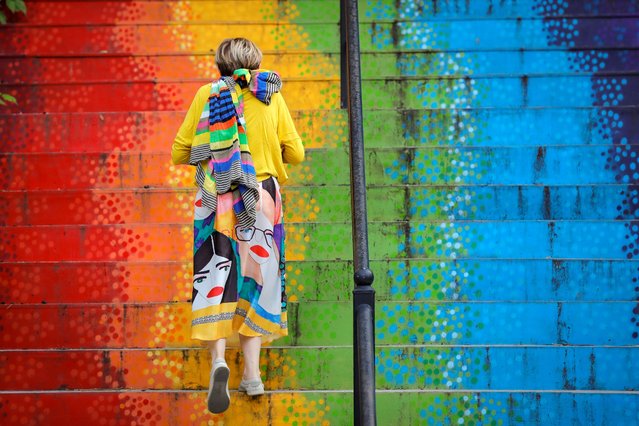