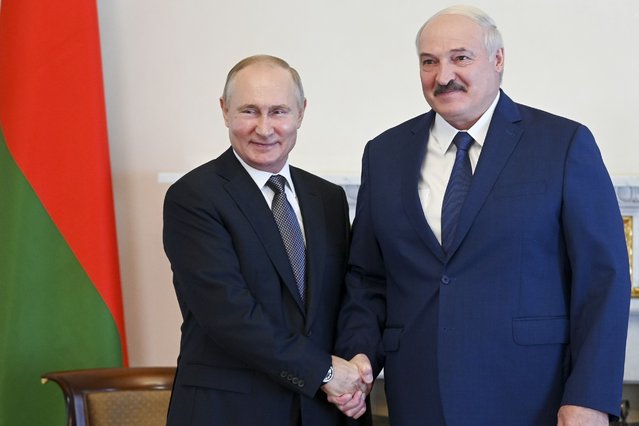 Russian President Vladimir Putin, left, and Belarusian President Alexander Lukashenko pose for a photo during their meeting in St. Petersburg, Russia, Tuesday, July 13, 2021. Putin has hosted the leader of Belarus, who has increasingly relied on Moscow's support amid increasing tensions with the West. Belarus' authoritarian President Alexander Lukashenko thanked Putin for a “very serious support from Russia” and pledged that his country will duly repay its loans. (Photo by Alexei Nikolsky, Sputnik, Kremlin Pool Photo via AP Photo) 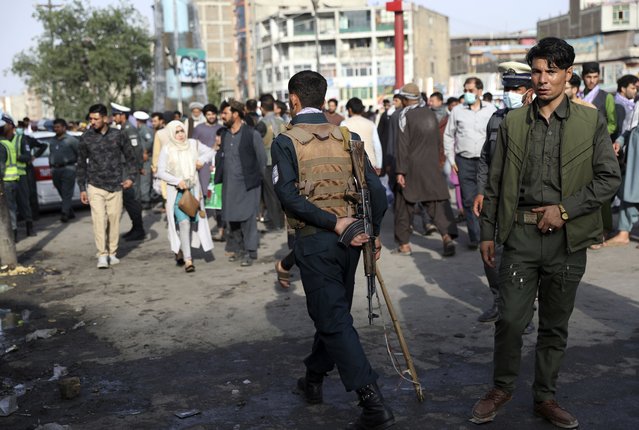 Afghan security personnel inspect the site of a deadly bomb explosion in Kabul, Afghanistan, Tuesday, July 13, 2021. The bomb killed several people and wounded over 10 others, Kabul police officials said on Tuesday. It comes as the U.S. all but winds up its 'forever war' in Afghanistan and a day after the outgoing commander Gen. Scott Miller warned increasing violence reduced the chances of finding a peaceful end to decades of war. (Photo by Rahmat Gul/AP Photo) 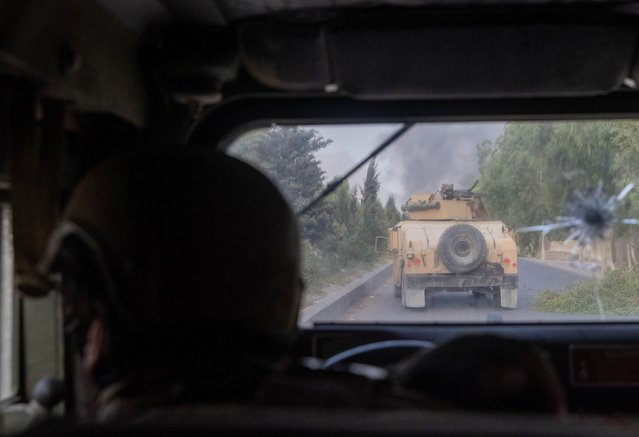 A member of Afghan Special Forces fires at Taliban after coming under heavy fire during the rescue mission of a police officer besieged at a check post, in Kandahar province, Afghanistan, July 13, 2021. (Photo by Danish Siddiqui/Reuters) 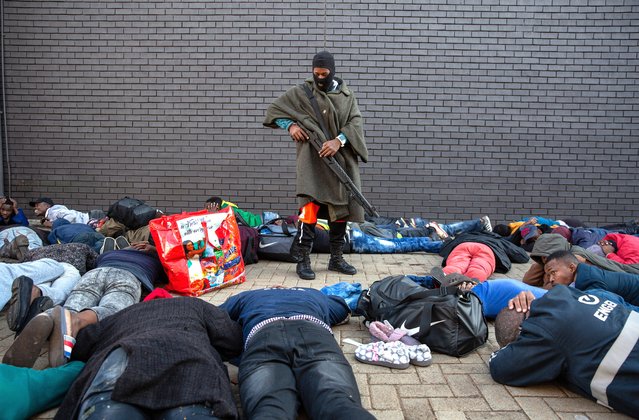 A policeman guards a group of suspected looters who were apprehended at a shopping centre on July 13, 2021 in Vosloorus, Johannesburg, South Africa. South Africa has deployed the military to quell spasms of civil unrest and looting sparked by last week's imprisonment of former president Jacob Zuma. The unrest is also fueled by high unemployment and social and economic fallout from the Covid-19 pandemic, which has hit the country hard. (Photo by James Oatway/Getty Images) 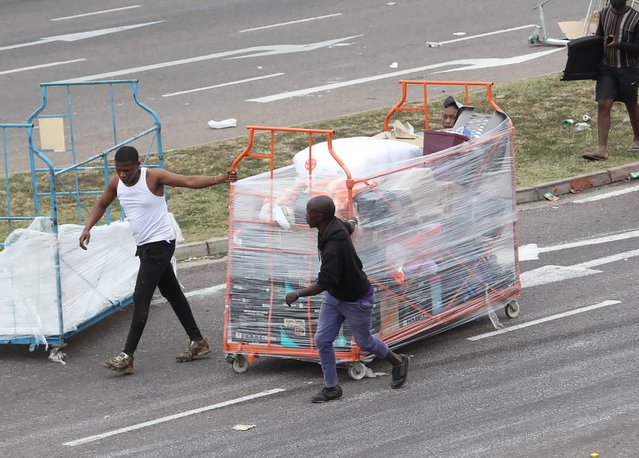 People make their way with good on a trolley from a store in Durban, South Africa, Tuesday July 13, 2021, as ongoing looting and violence continues. (Photo by AP Photo/Stringer) 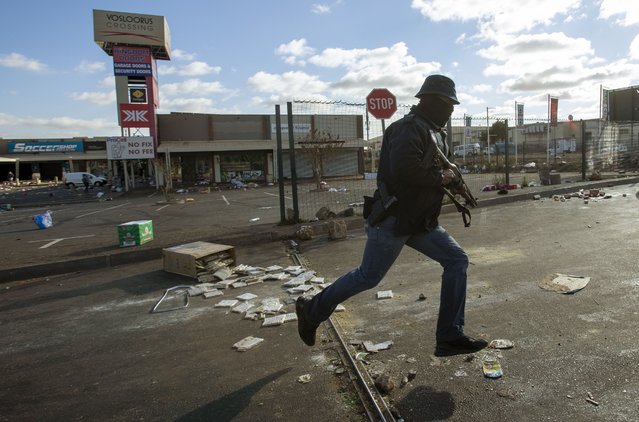 A metro officer dressed in plainclothes, pursues looters looters at a shopping centre in Soweto, Johannesburg, Tuesday July 13, 2021. South Africa's rioting continued Tuesday with the death toll rising to 32 as police and the military struggle to quell the violence in Gauteng and KwaZulu-Natal provinces. The violence started in various parts of KwaZulu-Natal last week when Zuma began serving a 15-month sentence for contempt of court. (Photo by Themba Hadebe/AP Photo) 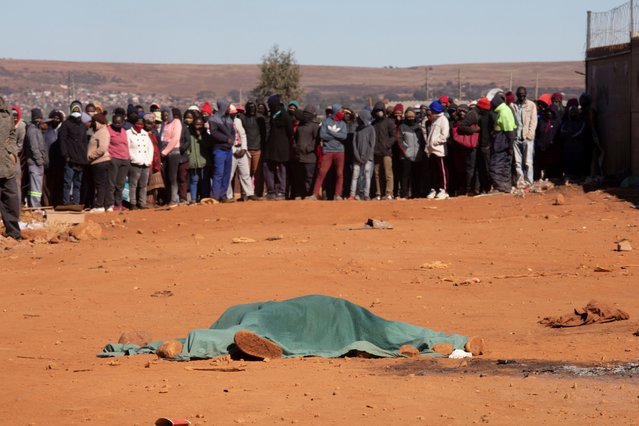 People look on a body of one of two looters, near a place where they died, in Johannesburg, South Africa, 13 July 2021. Former South Africa President Zuma was arrested on 07 July, and sentenced to 15 months in prison for contempt of court. Protests by his supporters included shops being looted, burned cars and the blocking of city streets in the country. (Photo by Kim Ludbrook/EPA/EFE) 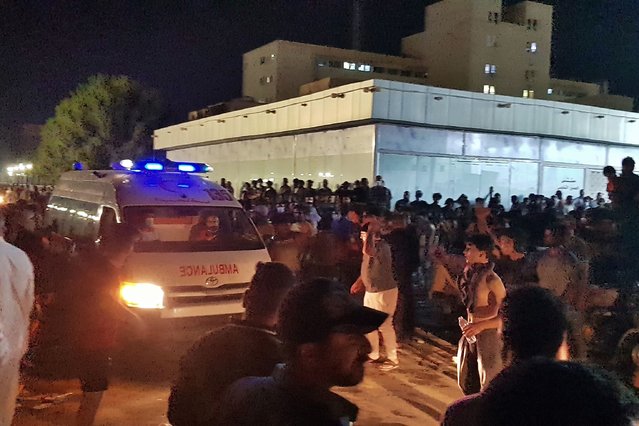 People gather outside a COVID-19 hospital in Nasiriyah, Iraq, early Tuesday, July 13, 2021. A catastrophic blaze erupted at the coronavirus hospital ward. It was the second time a large fire killed coronavirus patients in an Iraqi hospital this year. (Photo by AP Photo/Stringer) 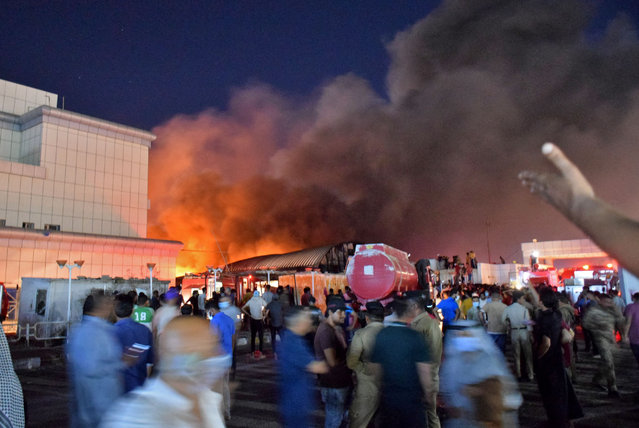 People gather as a massive fire engulfs the coronavirus isolation ward of Al-Hussein hospital in the southern Iraqi city of Nasiriyah, late on July 12, 2021. (Photo by Asaad Niazi/AFP Photo) 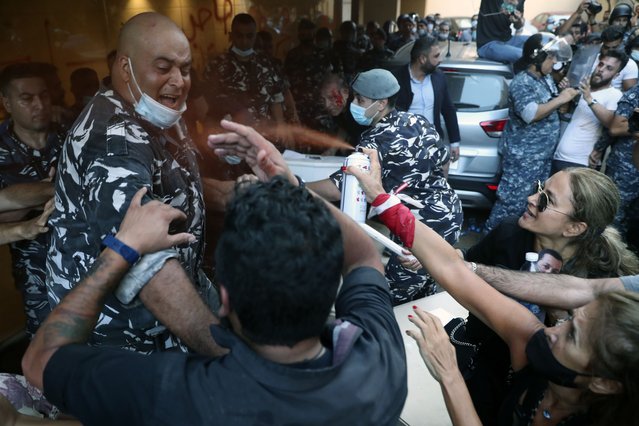 Relatives of people who were killed in last year's massive blast at Beirut's seaport, scuffle with riot police as they tried to storm the home of caretaker Interior Minister Mohamed Fehmi, in Beirut, Lebanon, Tuesday, July 13, 2021. Family members are angry with Fehmi because he rejected a request by the judge investigating the explosion to question Maj. Gen. Abbas Ibrahim, who is one of Lebanon's most prominent generals and heads of the General Security Directorate. (Photo by Bilal Hussein/AP Photo) 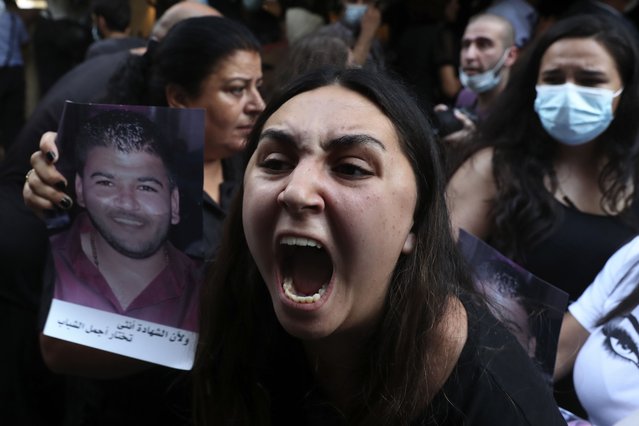 A woman whose brother was killed during last year's massive blast at Beirut's seaport, holds a portrait of him as she chants slogans during a protest outside the home of caretaker Interior Minister Mohamed Fehmi, in Beirut, Lebanon, Tuesday, July 13, 2021. (Photo by Bilal Hussein/AP Photo) 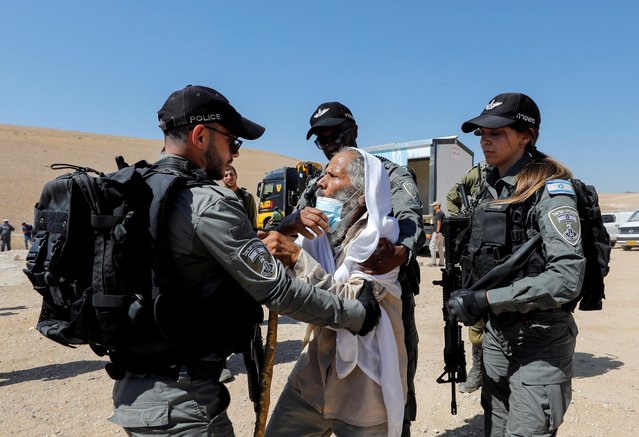 A Palestinian man scuffles with Israeli border police members as Israeli forces confiscate a healthcare clinic in Yatta, in the Israeli-occupied West Bank on July 12, 2021. (Photo by Mussa Qawasma/Reuters) 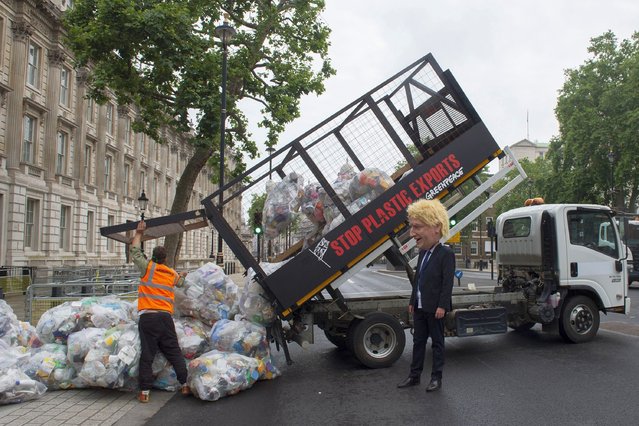 In this photo Greenpeace activists dump bags of plastic waste at the main entrance to Downing Street in a protest against the UK governments exporting of plastic waste on July 13, 2021 in London, England. 625 kilograms of plastic recycling has been dumped at Downing Street, the same volume that the UK exports every 30 seconds, and left by Greenpeace. A figure of the Prime Minister, Boris Johnson, in a Spitting Image-style mask was also at the scene. The intervention by Greenpeace comes as the Turkish government announced a U-turn on its decision to restrict imports of most types of plastic, raising the prospect of more UK recycling ending up illegally dumped or burned in Turkey. (Photo by David Mirzoeff/PA Wire Press Association) 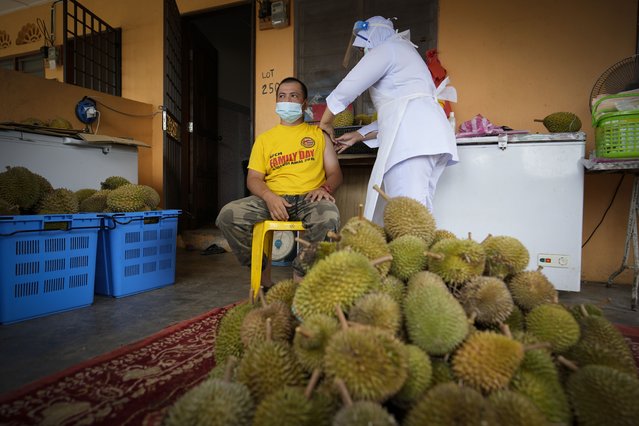 A nurse administers a Pfizer COVID-19 vaccine to an durian fruit vendor at his house in rural Sabab Bernam, central Selangor state, Malaysia, Tuesday, July 13, 2021. Medical teams are going house to house in rural villages to reach out to elderly citizens as the government seeks to ramp up its vaccination program. Despite a strict lockdown, the pandemic has worsened with more than 844,000 confirmed cases nationwide and over 6,200 deaths. (Photo by Vincent Thian/AP Photo) 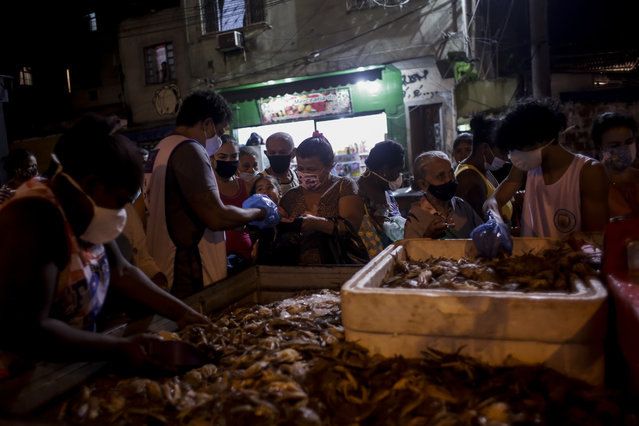 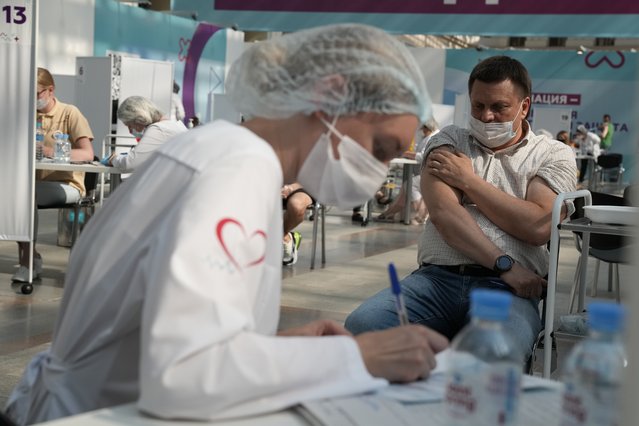 A man holds his arm after receiving a shot of Russia's Sputnik V coronavirus vaccine at a vaccination center in Gostinny Dvor, a huge exhibition place in Moscow, Russia, Monday, July 12, 2021. Russia has been facing a sharp rise of contagions in recent weeks, with daily new infections increasing from around 9,000 in early June to over 25,000 on Friday. (Photo by Pavel Golovkin/AP Photo) 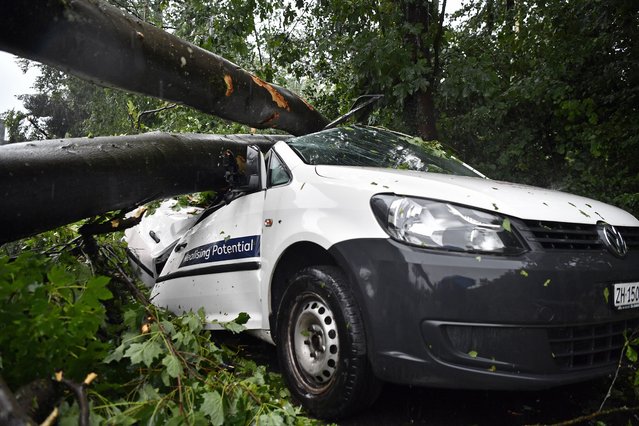 Fallen trees and broken branches hinder traffic and passage for pedestrians and cause numerous damages to buildings and cars after the heavy thunderstorm in Zurich, Switzerland, Tuesday, July 13, 2021. Violent thunderstorms with heavy rain, hailstorms and gale-force winds passed over Switzerland during the night on Tuesday. The Jura was affected first. Later, a thunderstorm over the canton of Zurich caused great damage. (Photo by Walter Bieri/Keystone via AP Photo) 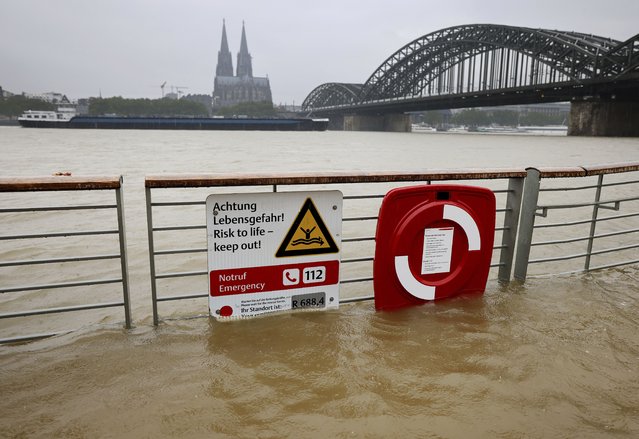 The river Rhine floods the promenade in Cologne, Germany, Tuesday, July 13, 2021. Thunderstorms and lots of rain are expected in North Rhine-Westphalia over the next few days. (Photo by Oliver Berg/dpa via AP Photo) 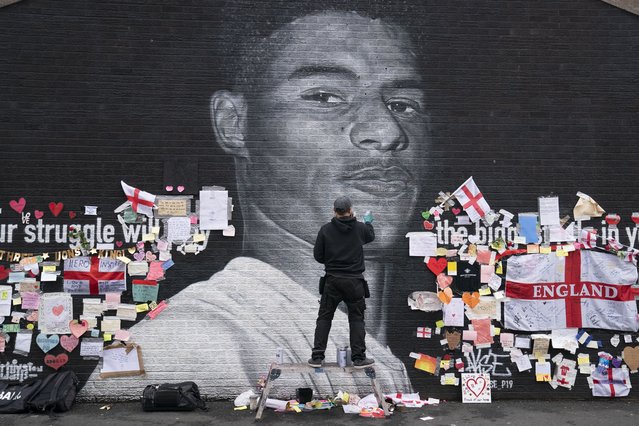 Street artist Akse P19 repairs the mural of Manchester United striker and England player Marcus Rashford on the wall of the Coffee House Cafe on Copson Street, in Withington, Manchester, England, Tuesday July 13, 2021. The mural was defaced with graffiti in the wake of England losing the Euro 2020 soccer championship final match to Italy, but subsequently covered with messages of support by well wishers. (Photo by Jon Super/AP Photo) 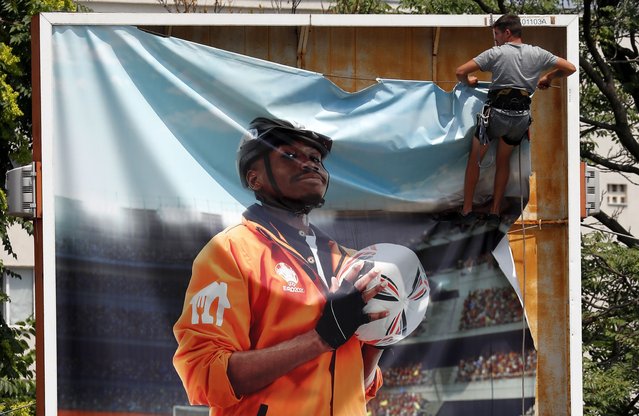 A Romanian utility climber (R) uninstalls a huge advertising billboard belonging to UEFA 2020 street marketing campaign, near the North Railway Station in Bucharest, Romania, 12 July 2021. Bucharest was one of the host cities of the UEFA EURO 2020 soccer tournament, which ended on 11 July 2021. (Photo by Robert Ghement/EPA/EFE) 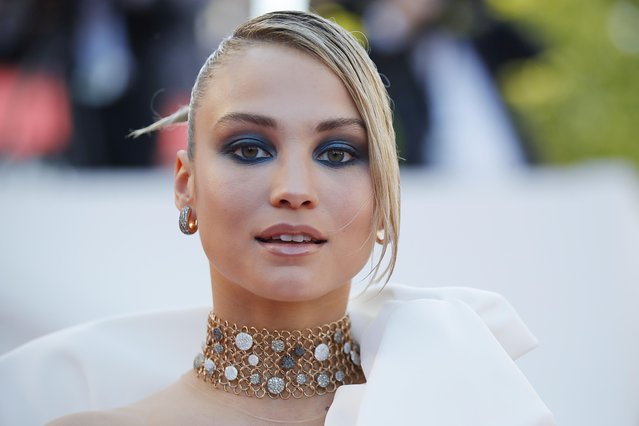 Belgian model Rose Bertram arrives for the screening of the film “Aline, The Voice Of Love” at the 74th edition of the Cannes Film Festival in Cannes, southern France, on July 13, 2021. (Photo by Sarah Meyssonnier/Reuters) 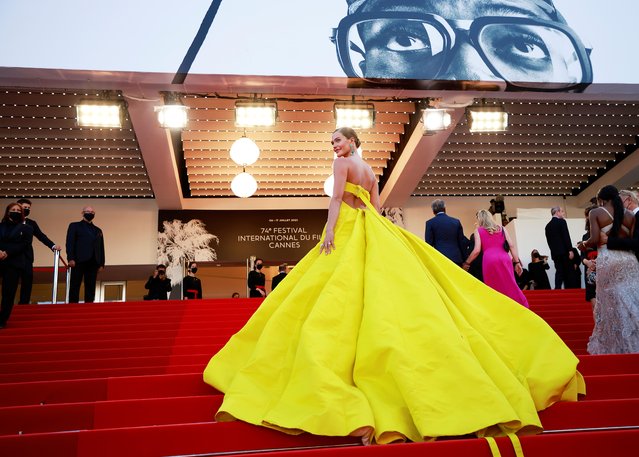 US model Noel Capri Berry arrives for the screening of the film “Aline, The Voice Of Love” at the 74th edition of the Cannes Film Festival in Cannes, southern France, on July 13, 2021. (Photo by Sarah Meyssonnier/Reuters) 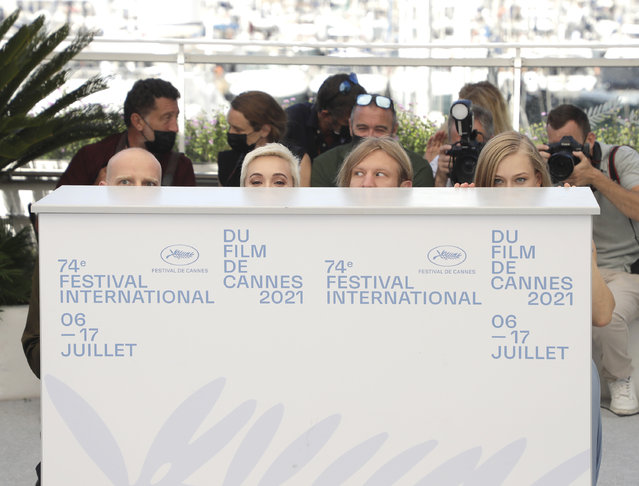 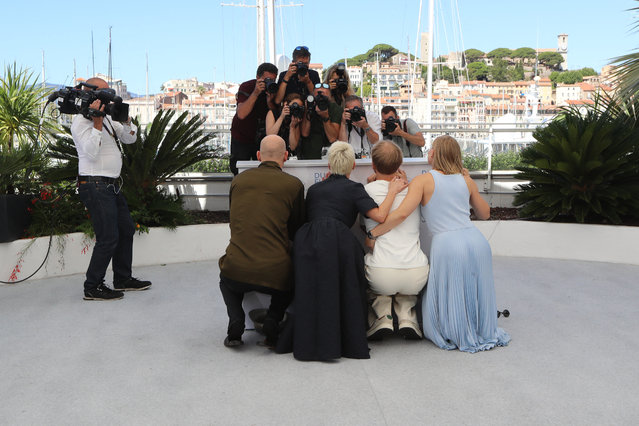 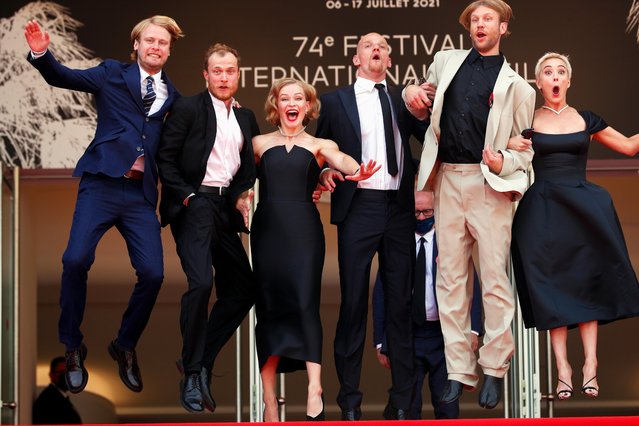