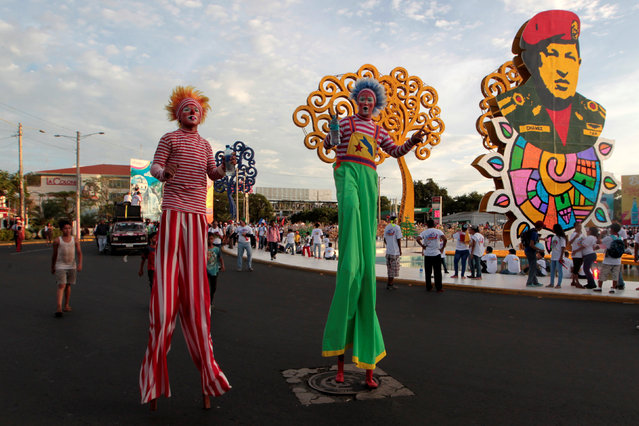 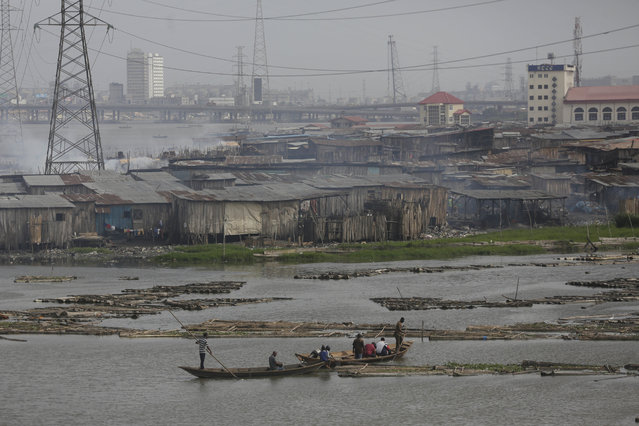 In this photo taken Tuesday July 5, 2016 people paddle their canoes at a slum in Lagos, Nigeria. Officials in Nigeria's biggest city are closing down dozens of churches, mosques and nightclubs in a bid to reduce noise in Lagos, the seaside commercial center where honking horns and thrumming generators compete with lusty hymn-singing and loudspeakers calling people to prayer. (Photo by Sunday Alamba/AP Photo) 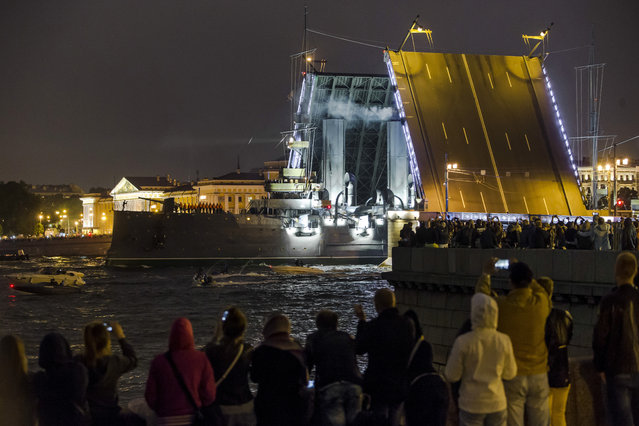 Tug boats tow the Aurora Cruiser through the Dvortsovy drawbridge along the Neva River in St. Petersburg, Russia, early Saturday, July 16, 2016. The cruiser Aurora, which fired the shot that announced the start of the Bolshevik Revolution, was pulled by tugboats up the Neva River early Saturday to return to its mooring in St. Petersburg after nearly two years of repair work. (Photo by Dmitri Lovetsky/AP Photo) 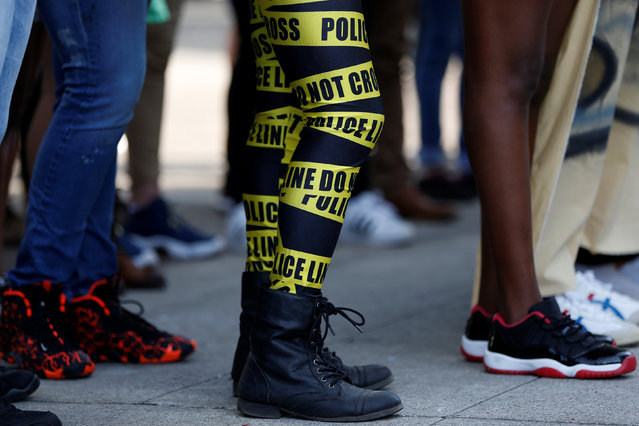 A protestor in police tape-themed clothing is seen during a protest against recent police-related shootings in Louisiana and Minnesota, in Oakland, California, U.S. July 15, 2016. (Photo by Stephen Lam/Reuters) 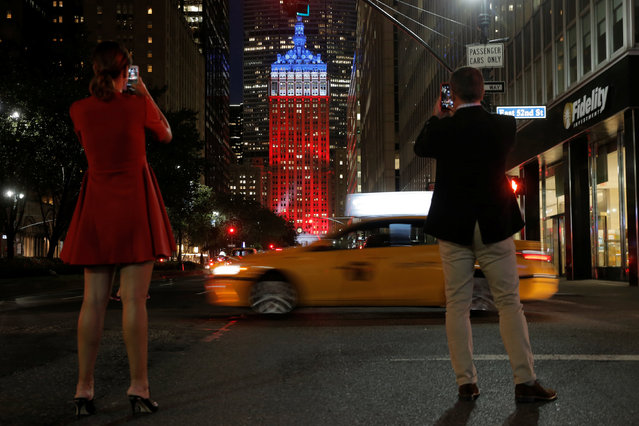 A couple photograph The Helmsley Building on Park Avenue, lit in honor of the victims of the Nice attacks, in Manhattan, New York, U.S., July 15, 2016. (Photo by Brendan McDermid/Reuters) 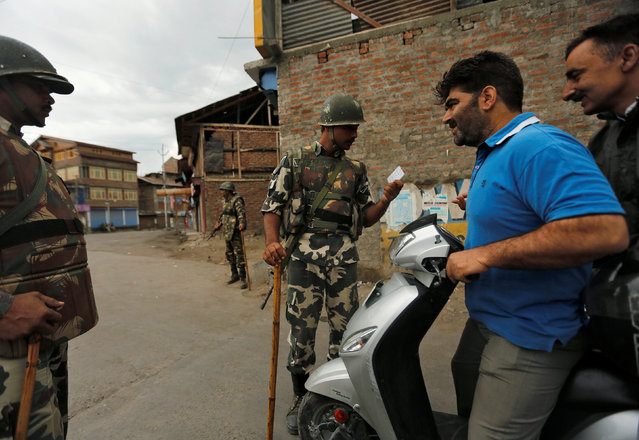 An Indian policeman checks an identity card of Kashmiri men as others stand guard during a curfew in Srinagar July 16, 2016. (Photo by Danish Ismail/Reuters) 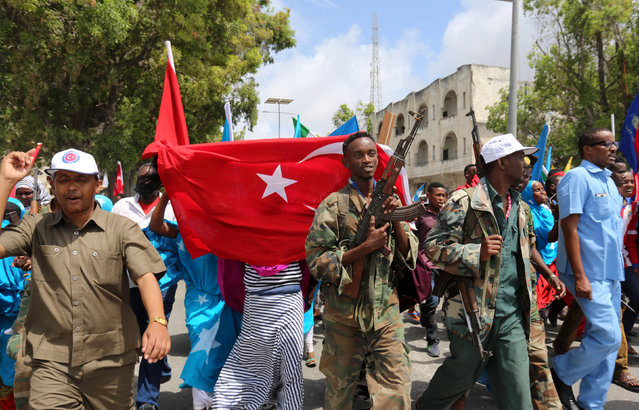 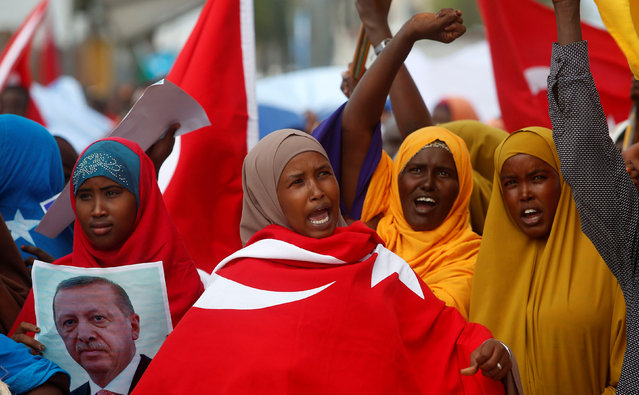 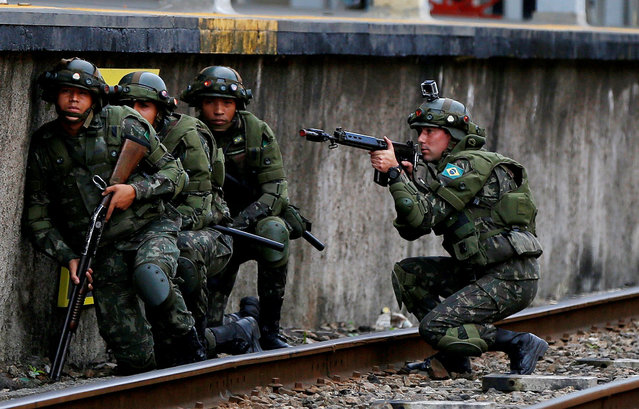 Brazilian army soldiers are pictured as they attend an exercise during terrorist attack simulation at a train station, ahead of the Rio 2016 Olympic Games in Rio de Janeiro, Brazil July 16, 2016. (Photo by Bruno Kelly/Reuters) 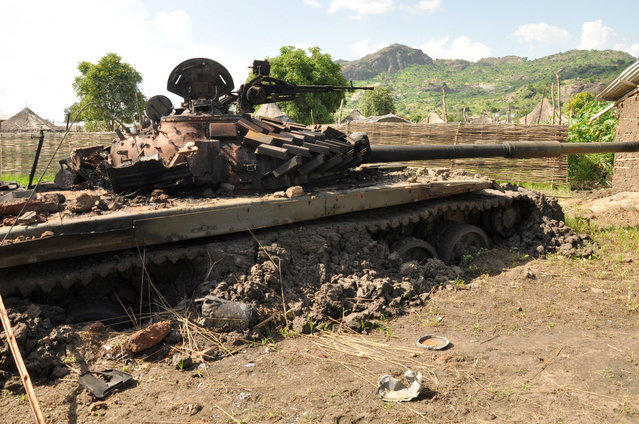 The wreckage of a military tank is seen abandoned after it was destroyed in the recent fighting in the Jabel area of Juba, South Sudan, July 16, 2016. (Photo by Jok Solomun/Reuters) 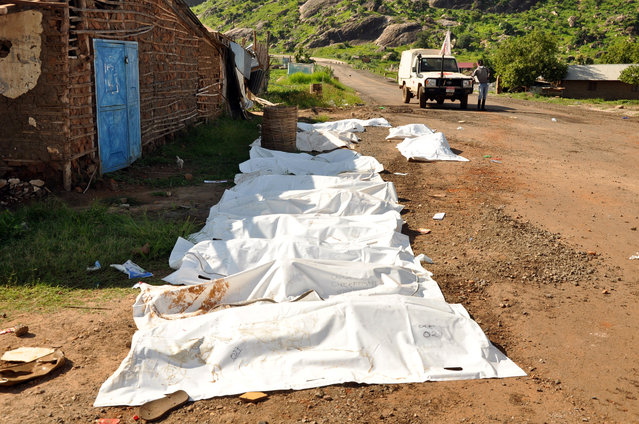 Bags containing bodies of unidentified people killed in the recent fighting are arranged before being transported by workers of the International Committee of the Red Cross (ICRC) in checkpoint area of Juba, South Sudan, July 16, 2016. (Photo by Jok Solomun/Reuters) 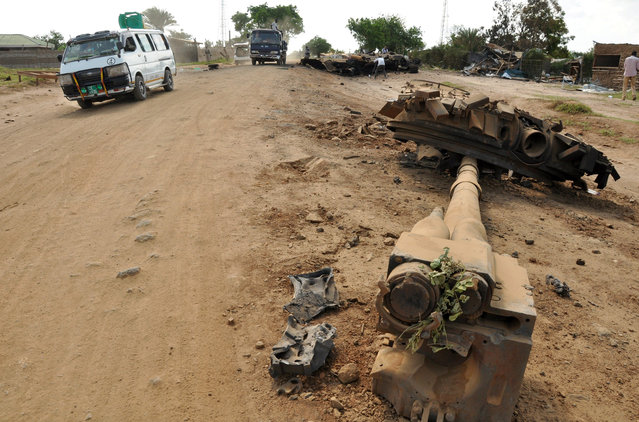 Motorists drive past military tanks that were destroyed and abandoned in the recent fighting in the Jabel area of Juba, South Sudan, July 16, 2016. (Photo by Jok Solomun/Reuters) 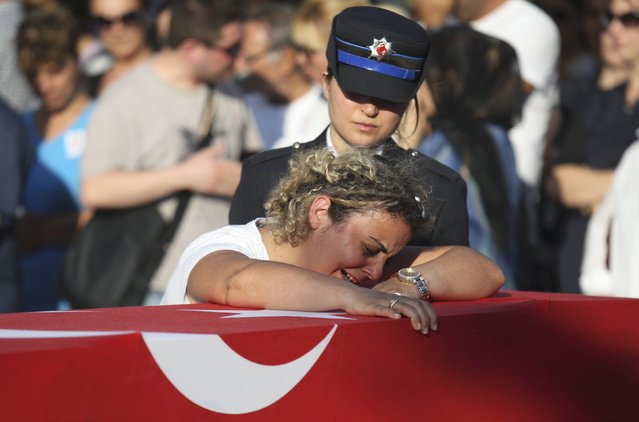 A relative mourns over the coffin holding body of police officer Nedip Cengiz Eker during a funeral ceremony in Marmaris, Turkey, July 16, 2016. (Photo by Kenan Gurbuz/Reuters) 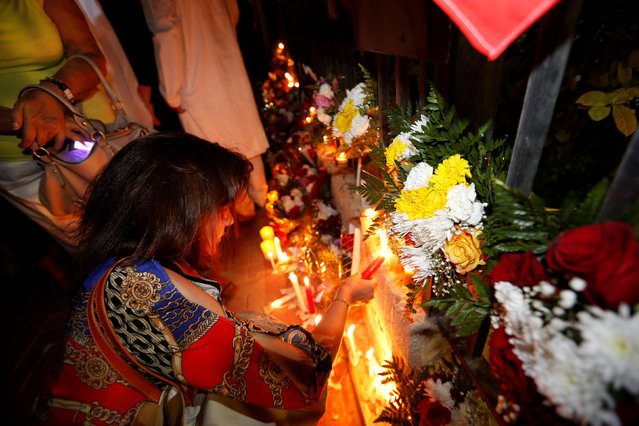 A Bahraini citizen places a candle during a candle vigil held at the French Embassy in Manama to condemn and mourn the attack in Nice, France, where a driver of a heavy truck ran into a crowd on Bastille Day killing at least 84 people, July 16, 2016. (Photo by Hamad I. Mohammed/Reuters) 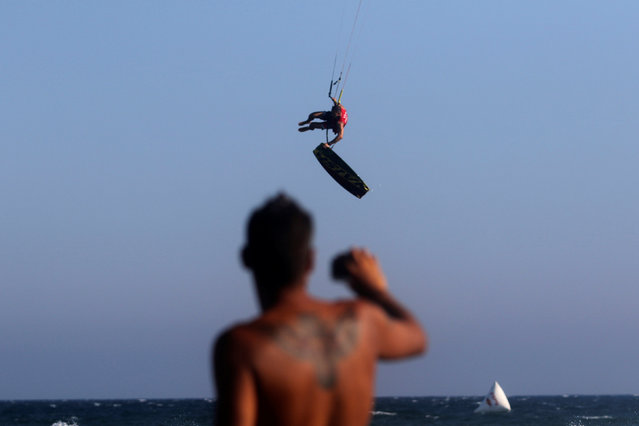 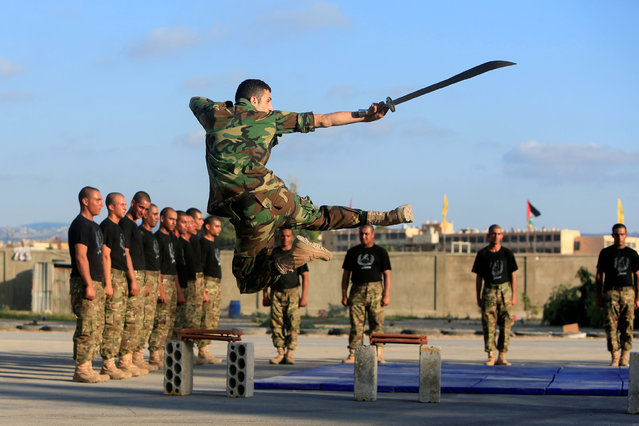 Palestinian Fatah members demonstrate their skills during a military display as part of a graduation ceremony in Rashidieh camp, in the port city of Tyre, southern Lebanon, July 16, 2016. (Photo by Ali Hashisho/Reuters) 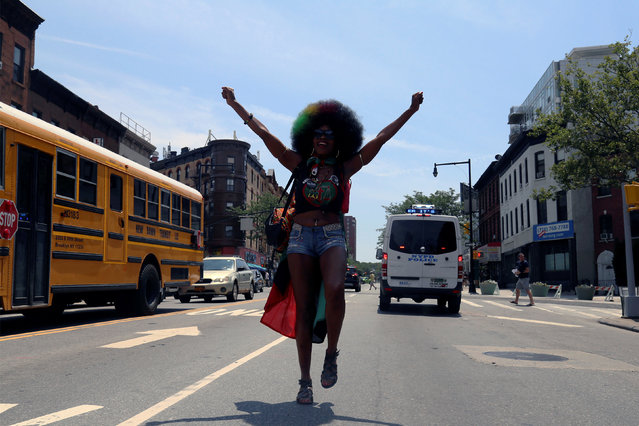 A woman takes part in a march in honour of police chokehold victim Eric Garner, two years after his death in the Brooklyn borough of New York, U.S., July 16, 2016. (Photo by Bria Webb/Reuters) 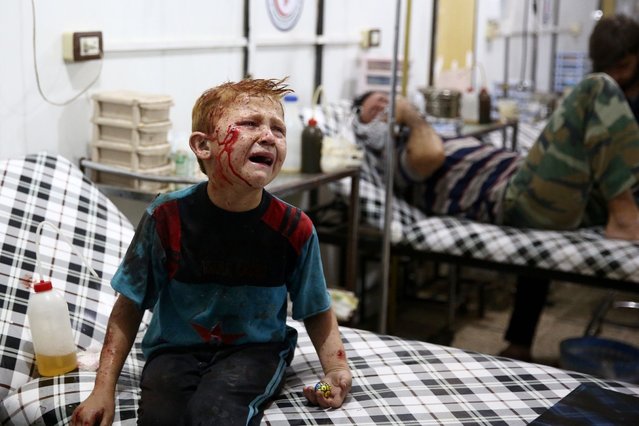 Salam, an injured eight-year-old Syrian boy, cries as he waits for medical care at a makeshift clinic after a reported air strike on July 16, 2016 in al-Rehan, near Douma, a rebel-held town east of the capital Damascus. (Photo by Abd Doumany/AFP Photo) 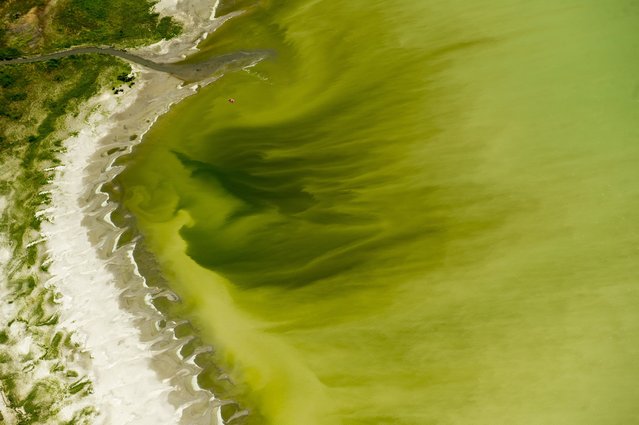 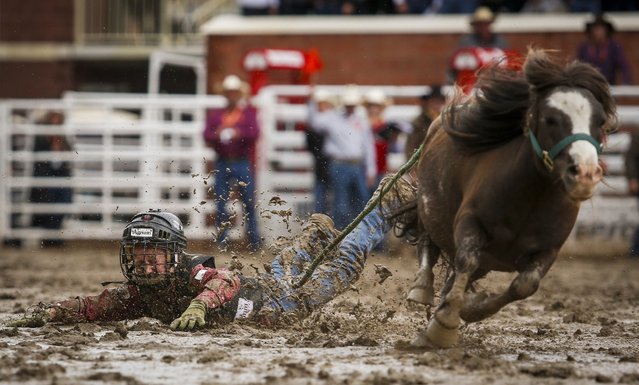 A competitor in the wild pony race is dragged through the mud at the Calgary Stampede in Calgary, Alberta, Friday, July 15, 2016. (Photo by Jeff McIntosh/The Canadian Press via AP Photo) 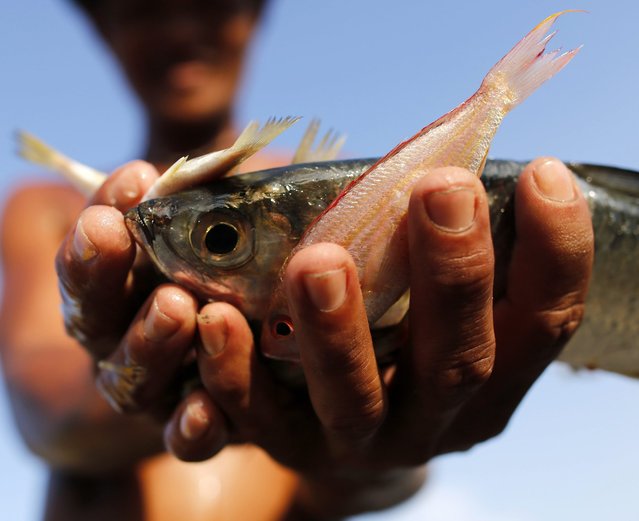 A Filipino fisherman displays fish at a fishing village in Cavite City, Philippines, 16 July 2016. According to media reports, Presidential Spokesperson Ernesto Abella stated that inspite of the awarding of a favorable decision on the South China Sea dispute, Filipino fishermen are cautioned to proceed with care amid news reports that China's coastguard has prevented Filipino boats from fishing around the hotly contested Scarborough Shoal. Beijing has ignored The Hague's Permanent Court of Arbitration ruling voiding its South China Sea claims. (Photo by Francis R. Malasig/EPA) 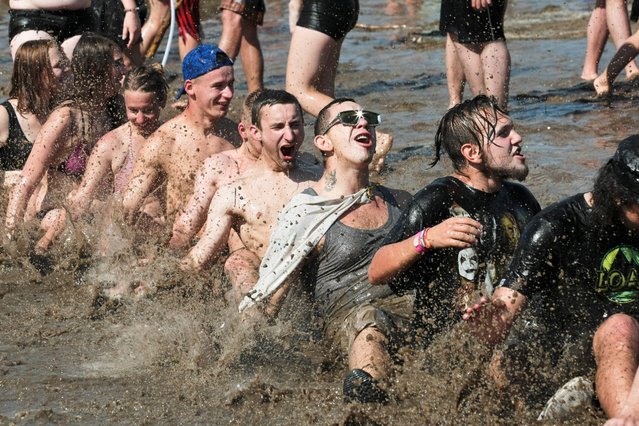 Festival-goers take part in the traditional mud bath on the last day of the 22nd Przystanek Woodstock (lit. Woodstock Bus Stop) Music Festival on the Odra River in Kostrzyn, Poland, 16 July 2016. The Woodstock Festival is one of the biggest open-air festivals in Europe. (Photo by Lech Muszynski/EPA) 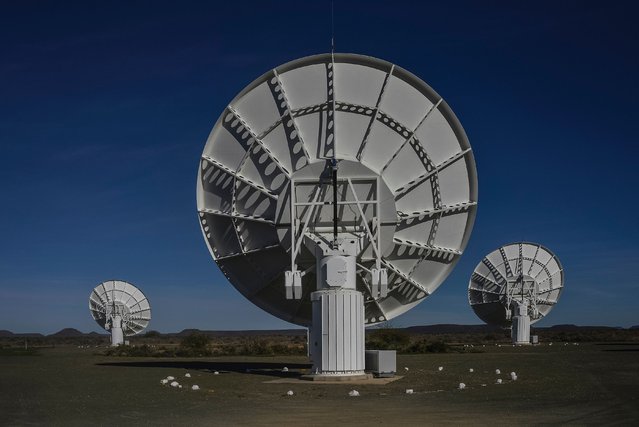 Part of the ensemble of dishes forming South Africa's MeerKAT radio telescope is seen in Carnarvon on July 16, 2016. Even operating at a quarter of its eventual capacity, South Africa's MeerKAT radio telescope showed off its phenomenal power on July 16, revealing 1,300 galaxies in a tiny corner of the universe where only 70 were known before. The image released Saturday was the first from MeerKAT, where 16 dishes were formally commissioned the same day. (Photo by Mujahid Safodien/AFP Photo) 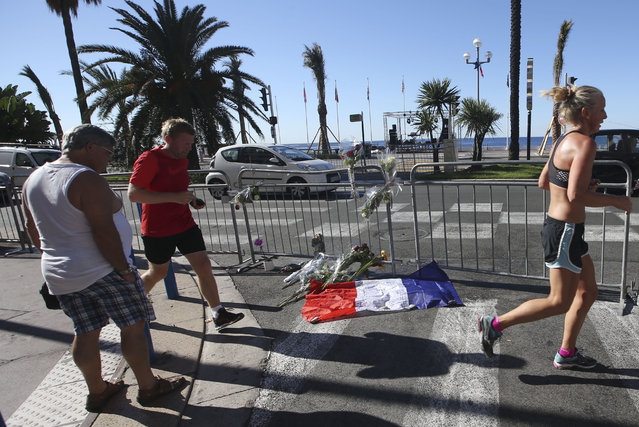 People jod by a French flag and flowers laid near the scene of a truck attack in Nice, southern France, Saturday, July 16, 2016. Nice's seaside boulevard reopens to traffic Saturday following a dramatic truck attack which killed more than 80 people and wounded more than 200 others at a fireworks display. (Photo by Luca Bruno/AP Photo) 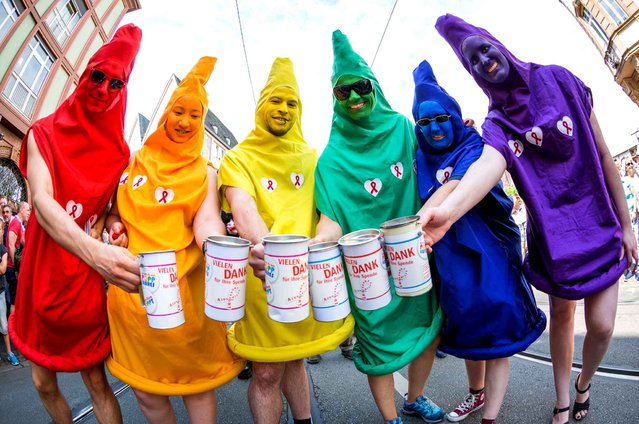 People dressed up as coloured condoms collect donations for the Frankfurt AIDS aid during a rally on the occasion of Christopher Street Day at the Roemerberg in Frankfurt on the Main, Germany, 16 July 2016. According to the police, around 1500 people marched through the centre of Frankfurt under the Motto “Love against the Rightwing”. (Photo by Frank Rumpenhorst/AP Images/DPA)
Edit Del
17 Jul 2016 12:10:00, post received 0 comments
Publication archive:
←   →
Popular tags:
All tags
Last searches: