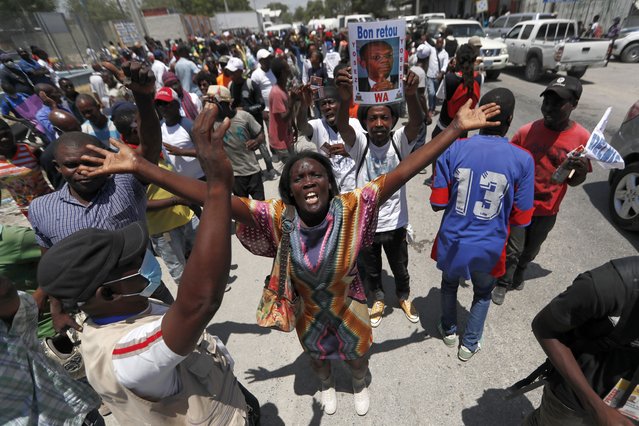 Supporters of former Haitian President Jean-Bertrand Aristide gather near the airport for his expected arrival from Cuba, where he underwent medical treatment, in Port-au-Prince, Haiti, Friday, July 16, 2021. Aristide's return adds a potentially volatile element to an already tense situation in a country facing a power vacuum following the July 7 assassination of President Jovenel Moïse. (Photo by Fernando Llano/AP Photo) 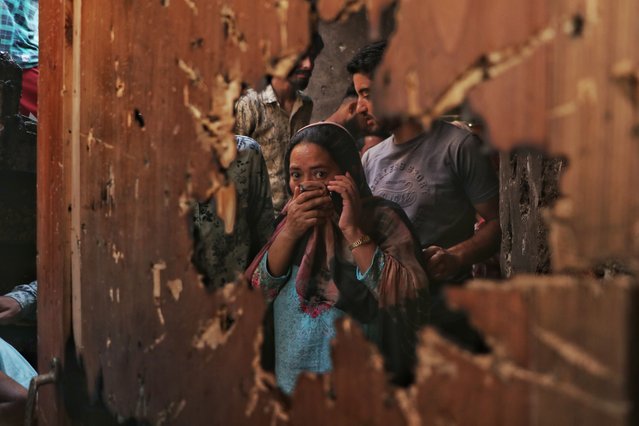 A kashmiri women reacts as she looks inside the house where suspected rebels had taken refuge is seen through a hole created by a mortar shell fired by government forces during a gunfight, in Srinagar, Indian-controlled Kashmir, on Friday, July 16, 2021. Two suspected rebels were killed in a gunfight in in the disputed region's main city on Friday, officials said, as violence increased in recent weeks. (Photo by Muhammad Manan/Pacific Press/Rex Features/Shutterstock) 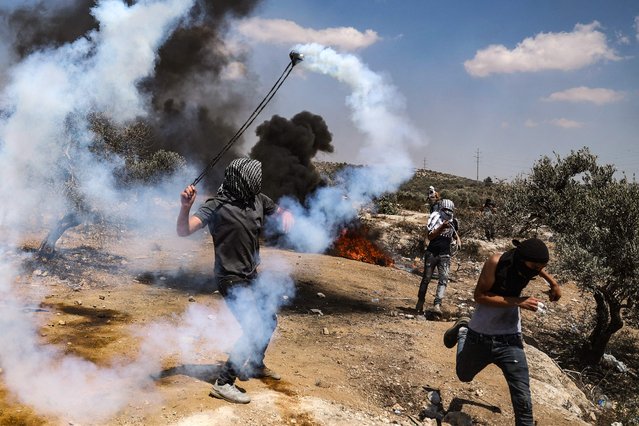 A Palestinian protester returns a tear gas canister toward Israeli forces during confrontaions with them in the town of Beita, near the occupied West Bank city of Nablus, opposite the newly-established Israeli wildcat settler outpost of Eviatar, on July 16 2021. (Photo by Jaafar Ashtiyeh/AFP Photo) 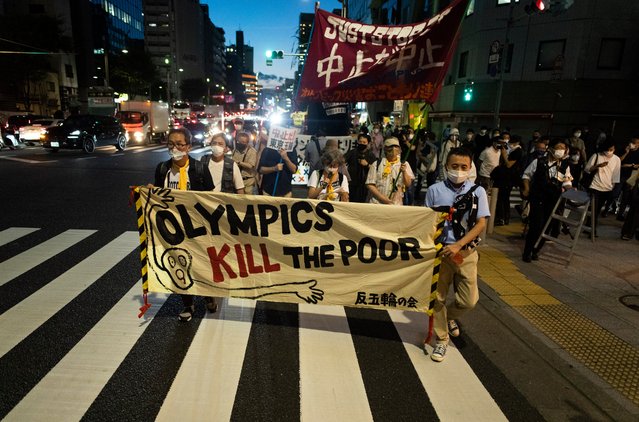 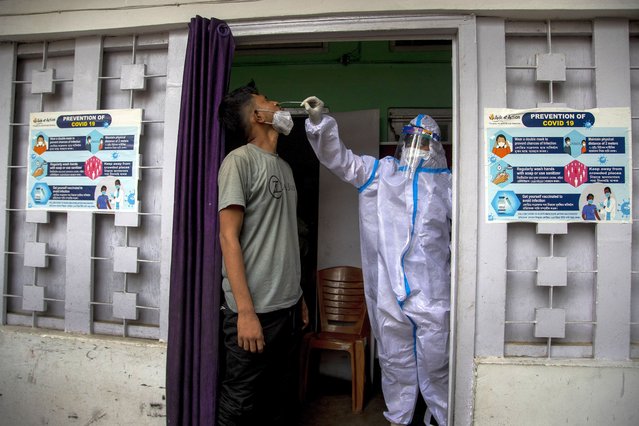 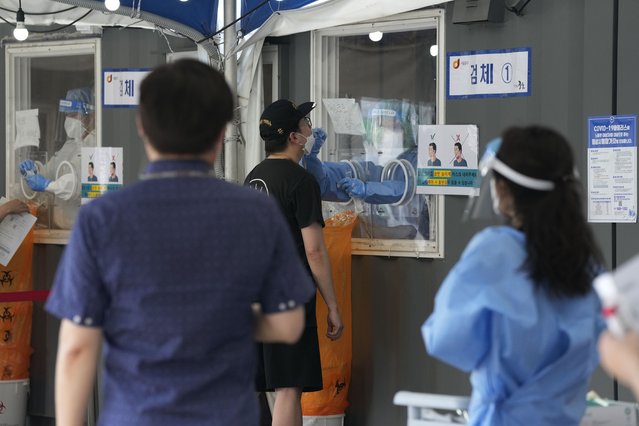 A medical worker in a booth takes a nasal sample from a man during a coronavirus testing at a makeshift testing site in Seoul, South Korea, Friday, July 16, 2021. South Korean officials are pushing for tightened pandemic restrictions beyond the hard-hit capital area as they wrestle with a record-breaking surge in coronavirus cases. (Photo by Ahn Young-joon/AP Photo) 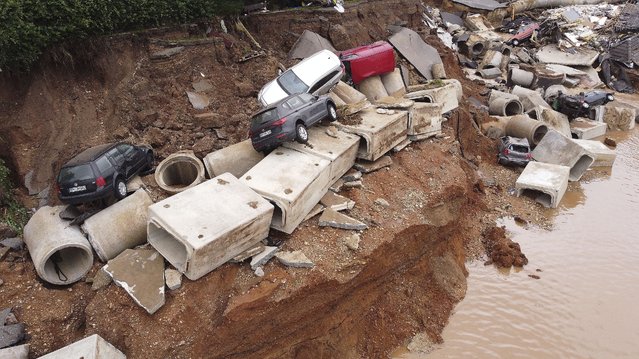 Debris of the sewage system and damaged cars are pictures in the Blessem district of Erftstadt, Germany, Friday, July 16, 2021. Heavy rains caused mudslides and flooding in the western part of Germany. Multiple have died and dozens are missing as severe flooding in Germany and Belgium turned streams and streets into raging, debris-filled torrents that swept away cars and toppled houses. (Photo by David Young/dpa via AP Photo) 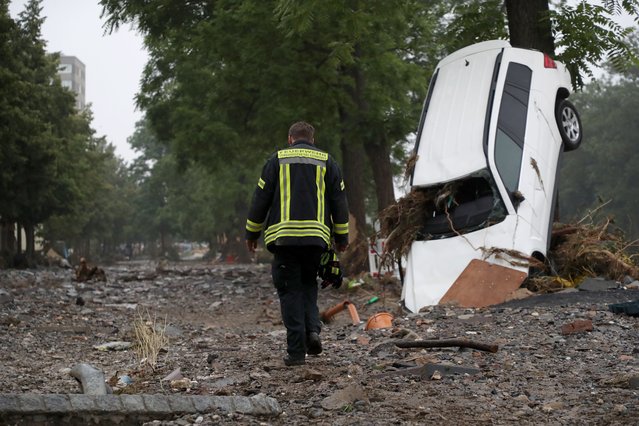 A member of the fire department (Feuerwehr) walks amid the debris near a damaged car after flooding in Bad Neuenahr-Ahrweiler, Germany, 16 July 2021. Large parts of Western Germany were hit by heavy, continuous rain in the night to 15 July resulting in local flash floods that destroyed buildings and swept away cars. (Photo by Friedemann Vogel/EPA/EFE) 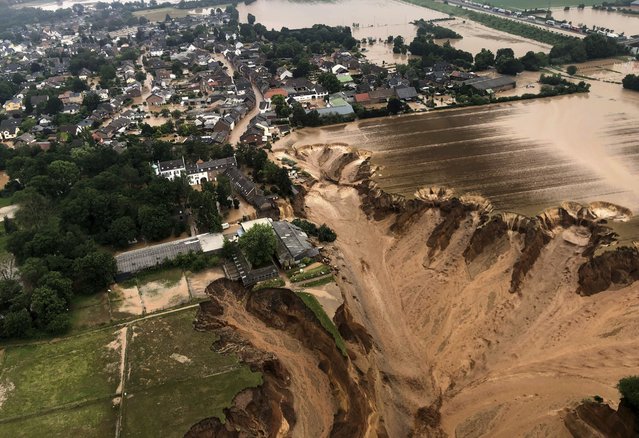 This image provided on Friday, July 16, 2021 by the Cologne district government shows the Blessem district of Erftstadt in Germany. Rescuers were rushing Friday to help people trapped in their homes in the town of Erftstadt, southwest of Cologne. Regional authorities said several people had died after their houses collapsed due to subsidence, and aerial pictures showed what appeared to be a massive sinkhole. (Photo by Rhein-Erft-Kreis via AP Photo) 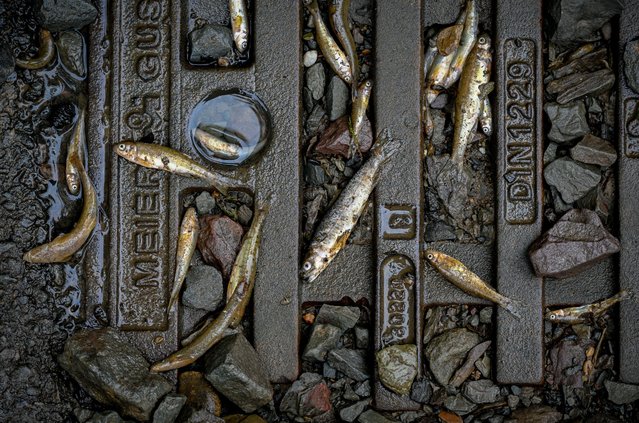 Dead fish lie on a blocked gully caused by flooding after the Volme River burst its banks on July 16, 2021 near by Hagen in Dahl, Germany. At least 81 people have been killed in devastating floods in western Germany with emergency services continuing to search for hundreds of people still missing in the worst hit states of North Rhine-Westphalia and Rhineland-Palatinate. (Photo by Sascha Schuermann/Getty Images) 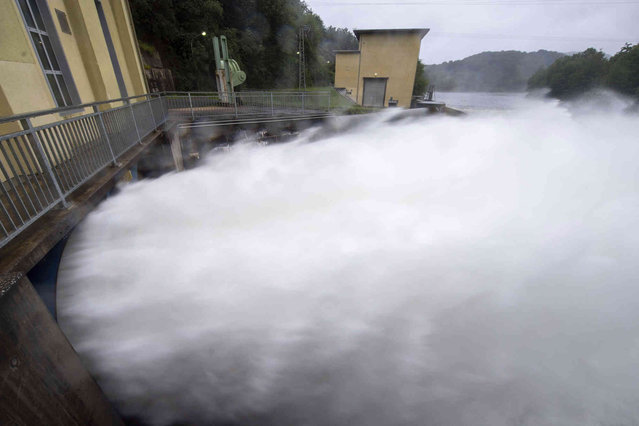 Water shoots out of the outlet of the hydroelectric power station below the Ruhr dam near Heimbach, Germany, Friday, July 16, 2021. (Photo by Lino Mirgeler/dpa via AP Photo) 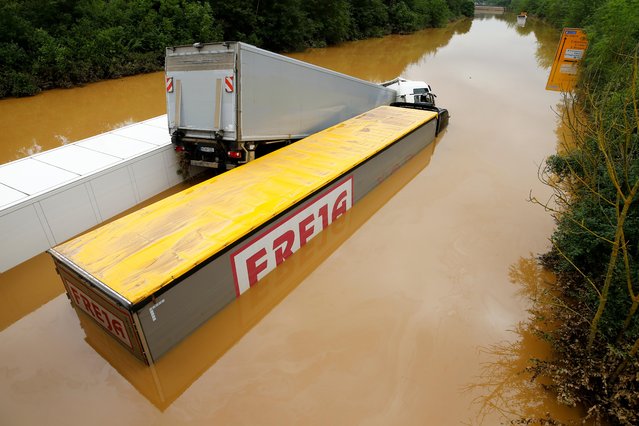 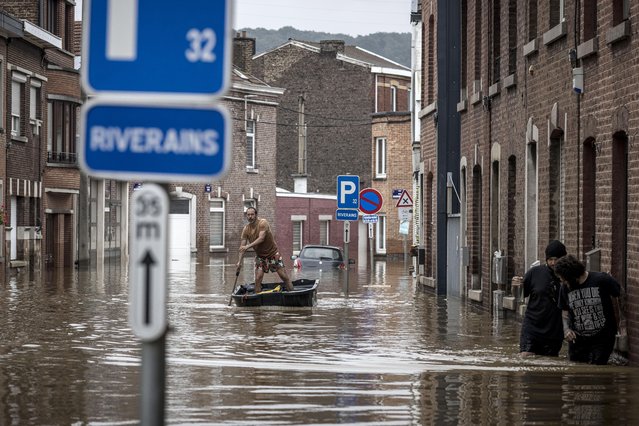 A man rows a boat down a residential street after flooding in Angleur, Province of Liege, Belgium, Friday July 16, 2021. (Photo by Valentin Bianchi/AP Photo) 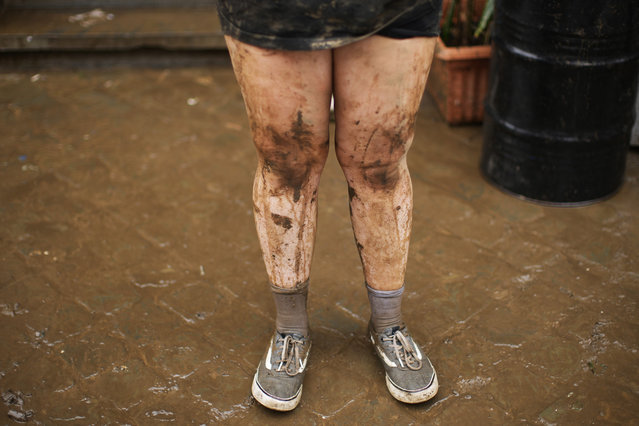 A woman stands outside while cleaning mud and water out of her house after flooding in Ensival, Verviers, Belgium, Friday July 16, 2021. Severe flooding in Germany and Belgium has turned streams and streets into raging torrents that have swept away cars and caused houses to collapse. (Photo by Francisco Seco/AP Photo) 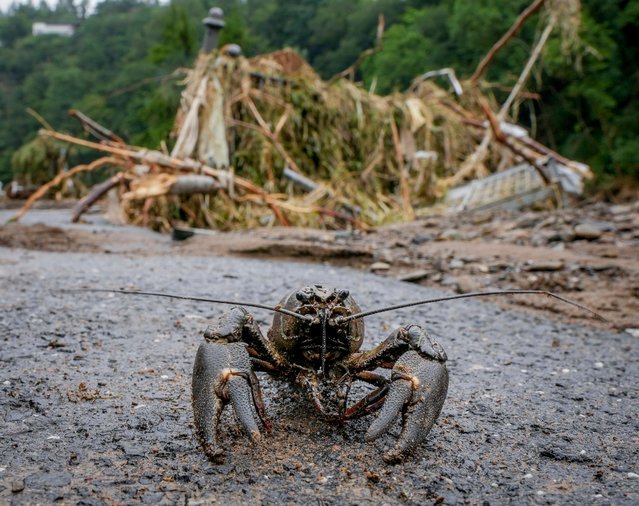 A crustacean walks on a road after flooding went back in Schuld, Germany, Friday, July 16, 2021. Two days before the Ahr river went over the banks after strong rain falls causing severals deaths and hundreds of people missing. (Photo by Michael Probst/AP Photo) 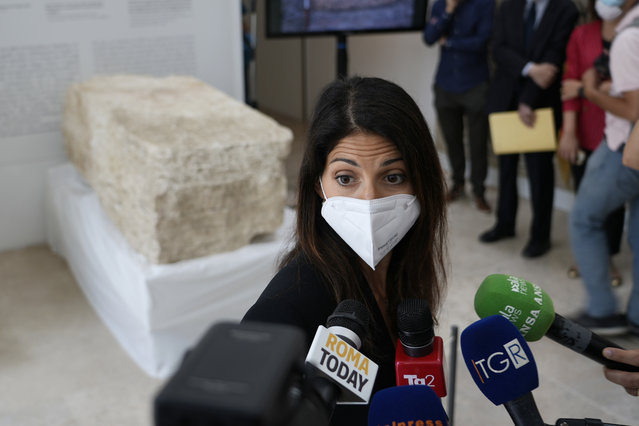 Rome's Mayor Virginia Raggi, answers to journalists' questions, during the presentation to the press of an archeological finding emerged during the excavations at a Mausoleum in Rome, Friday, July 16, 2021. The monumental pomerial stone is dating back to Roman Emperor Claudio and was used to mark the “pomerium” the sacred boundaries of the “Urbe”, the city of Rome, during the Roman empire. (Photo by Domenico Stinellis/AP Photo) 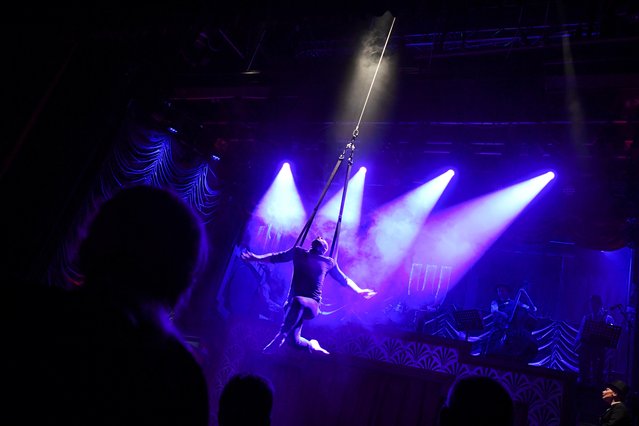 An artist performs during the variety show “20 20” at Wintergarten theatre after the COVID-19 lockdown measures were eased, in Berlin, Germany on July 15, 2021. (Photo by Annegret Hilse/Reuters) 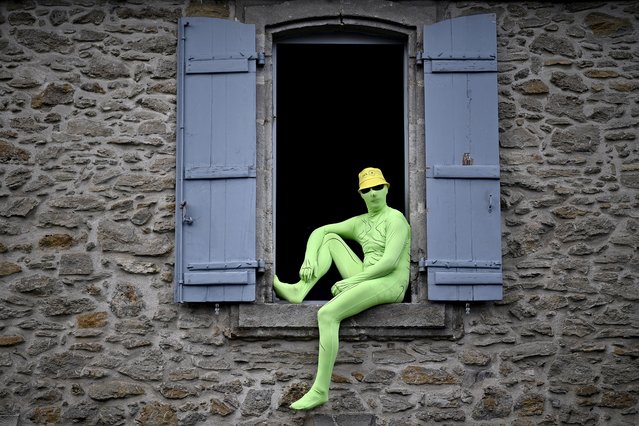