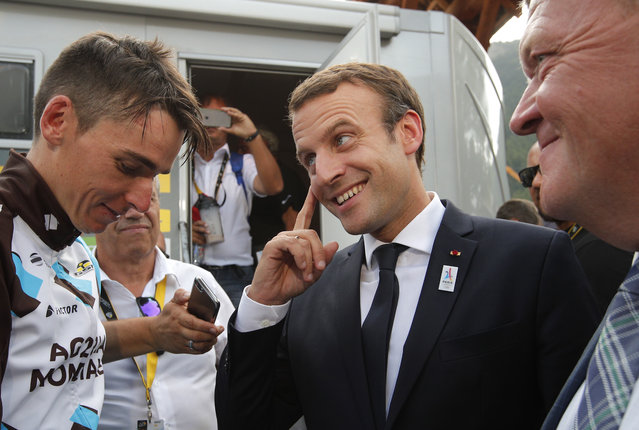 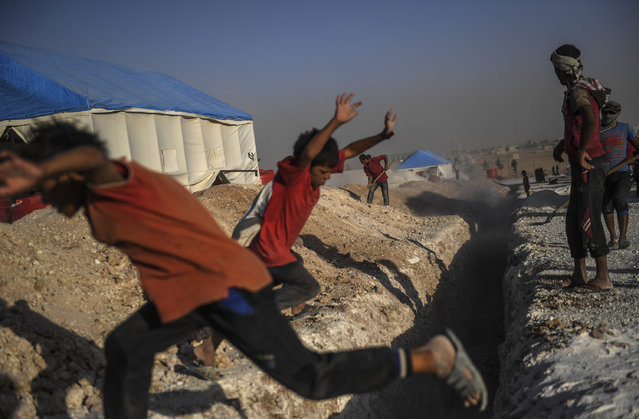 Boys play as workers dig a trench for the sewage system of a temporary camp for displaced people near the northern Syrian village of Ain Issa on July 19, 2017, during an offensive by Syrian Democratic Forces, a Kurdish-Arab alliance, to retake Raqa from Islamic State (IS) group fighters. The SDF have been pressing an operation to capture the jihadist stronghold since last year, and they penetrated the city in June. (Photo by Bulent Kilic/AFP Photo) 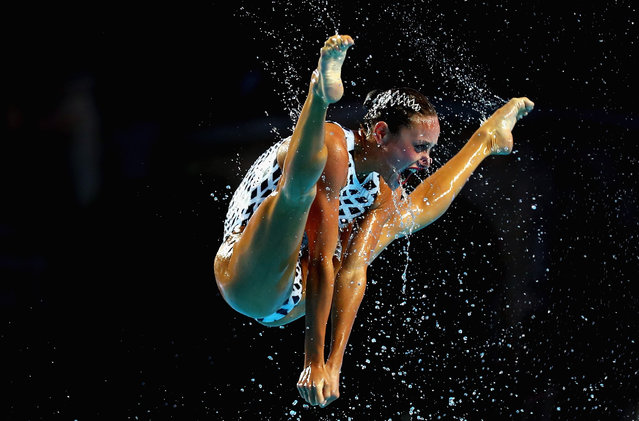 Ukraine compete during the Synchronised Swimming Team Free, preliminary round on day six of the Budapest 2017 FINA World Championships on July 19, 2017 in Budapest, Hungary. (Photo by Clive Rose/Getty Images) 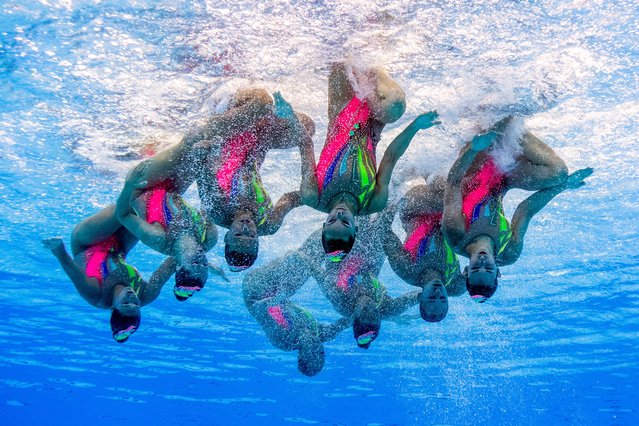 This picture taken with an underwater camera shows team France competing in the Women's Team Free Routine preliminary during the synchronised swimming competition at the 2017 FINA World Championships in Budapest, on July 19, 2017. (Photo by Francois-Xavier Marit/AFP Photo) 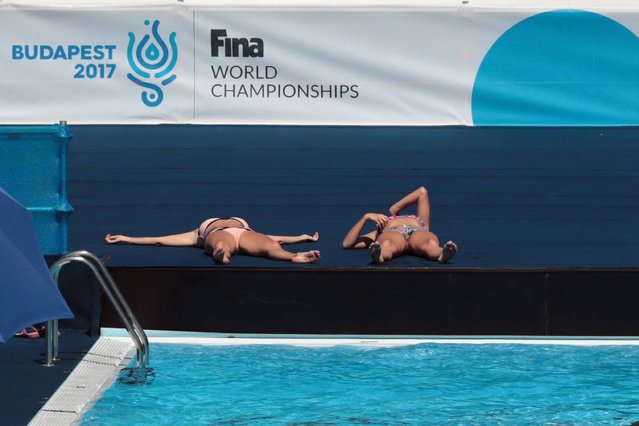 Athlete rest before the Women Solo free routine final during the synchronised swimming competition at the 2017 FINA World Championships in Budapest, on July 19, 2017. (Photo by Ferenc Isza/AFP Photo) 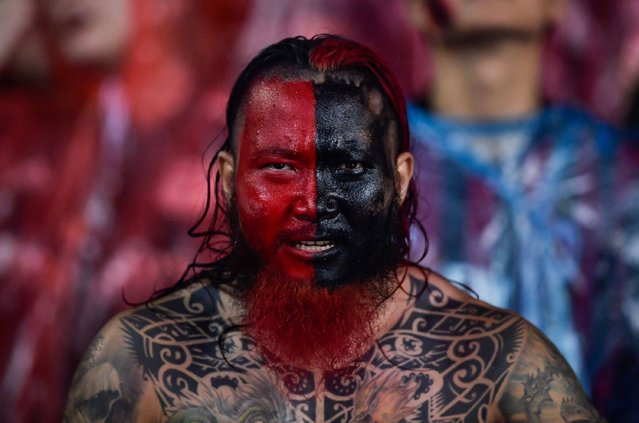 An AC Milan supporter watches from the stands as the team plays Barussia Dortmund during their International Champions Cup football match in Guangzhou, in China's southern Guangdong province on July 18, 2017. (Photo by AFP Photo/Stringer) 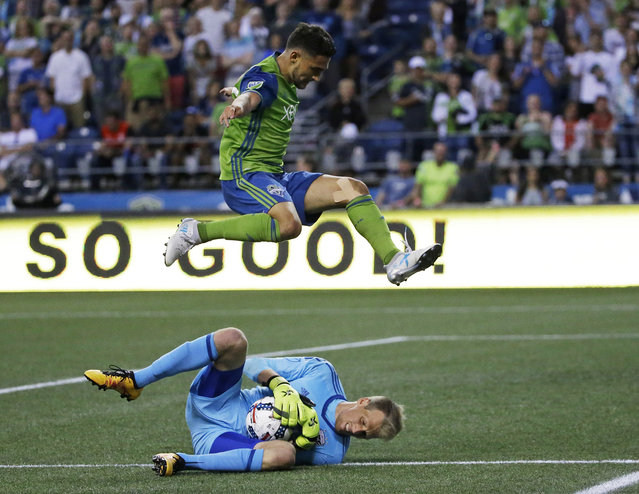 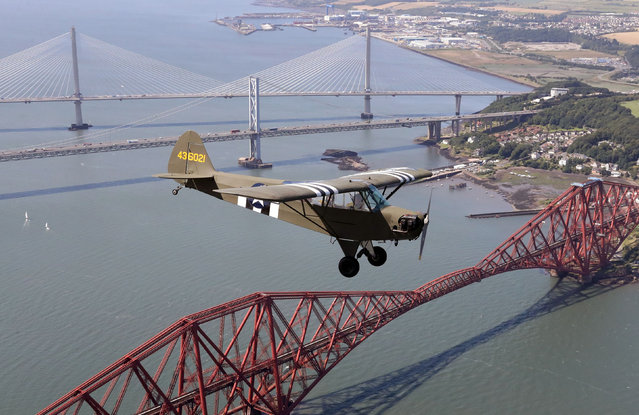 Jim McTaggart takes his 1940 Piper Cub for a practice flight over the Forth rail bridge, the Forth road bridge and the new Queensferry crossing ahead of the aircraft’s appearance at Scotland’s National Airshow in Queensferry, Scotland on July 19, 2017. (Photo by Andrew Milligan/PA Wire) 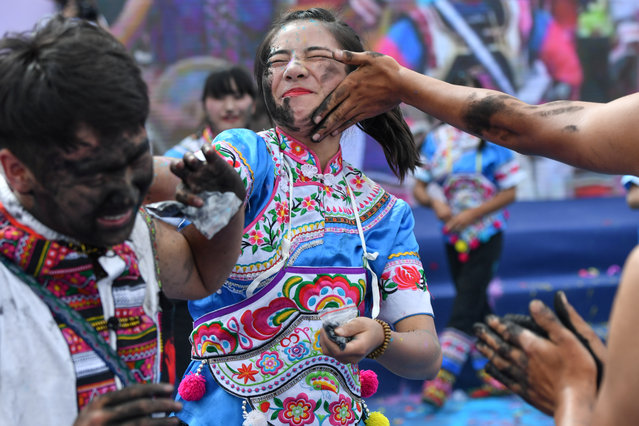 People smear black ash with hands onto each other to wish for good luck and fortune during a traditional festival of the Yi ethnic minority in Qiubei County, Yunnan province, China July 18, 2017. (Photo by Ren Dong/Reuters/CNS) 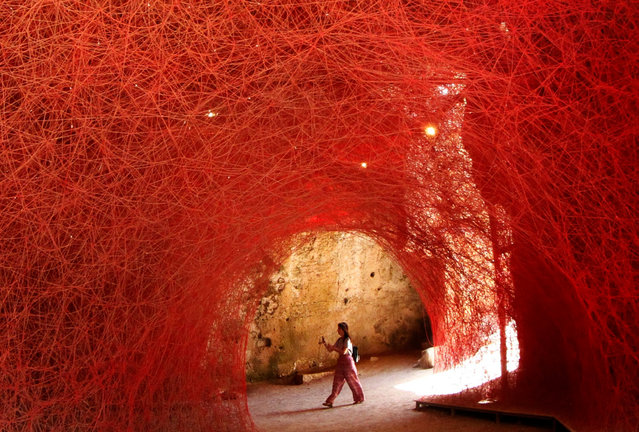 A visitor views the art installation “A Walk Through the Line” by Japanese artist Chiharu Shiota, that is on display as part of the European Capital of Culture 2017 exhibitions program, in Paphos, Cyprus, 19 July 2017. Since January 2017, the city of Pafos holds the title of the European Capital of Culture 2017, along with Aarhus in Denmark. (Photo by Katia Christodoulou/EPA) 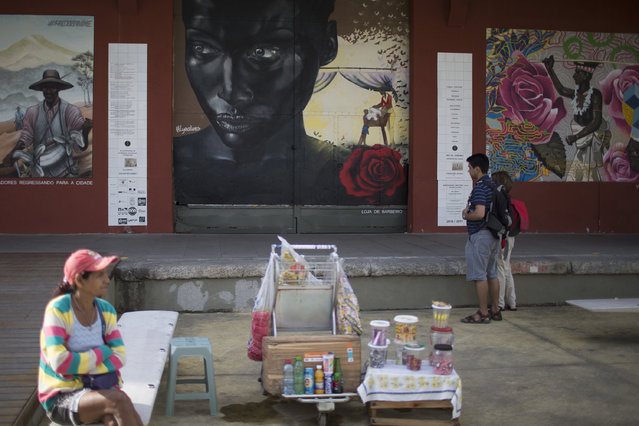 In this July 9, 2017 photo, tourists look at murals in the renovated port area in Rio de Janeiro, Brazil. A new app called “Museum of Yesterday” seeks to educate visitors about the history and role of Rio de Janeiro’s revitalized port in colonization, slavery and even recent corruption investigations. (Photo by Renata Brito/AP Photo) 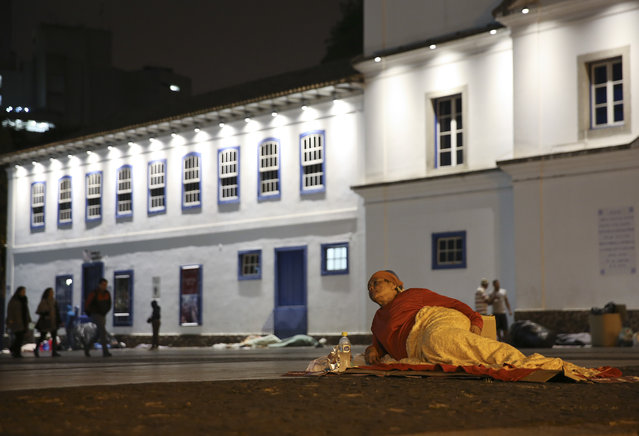 A homeless woman prepares to sleep on a sidewalk during a cold night in downtown Sao Paulo, Brazil, Wednesday, July 19, 2017. According to city hall figures, at least 16,000 homeless people live in the city of Sao Paulo. (Photo by Andre Penner/AP Photo) 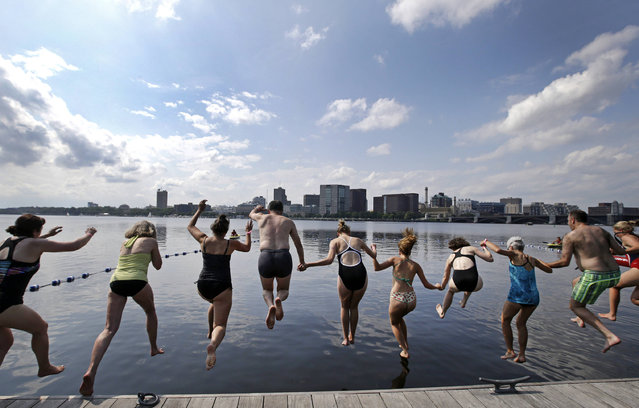 People dive into the Charles River during the “City Splash” event, Tuesday, July 18, 2017, in Boston. For the fifth year in a row, intrepid swimmers get a rare chance to beat the summer heat with a dip in the once notoriously filthy Charles River, where conservationists are working to build a permanent swim park. (Photo by Elise Amendola/AP Photo) 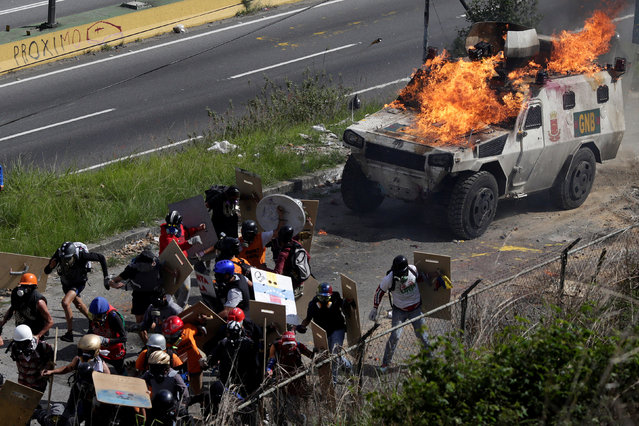 An armored vehicle is seen lit on fire during clashes with demonstrators at a rally against Venezuelan President Nicolas Maduro's government in Caracas, Venezuela, July 18, 2017. (Photo by Marco Bello/Reuters) 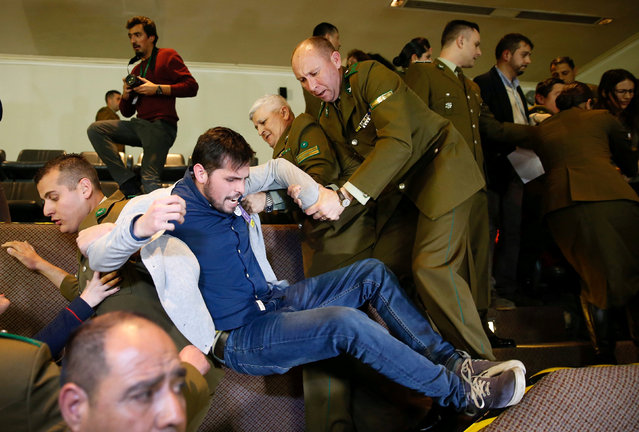 A demonstrator is detained by police officers after shouting slogans against abortion inside the Chilean congress during a session legislating a draft law which seeks to ease the country's strict abortion ban, in Valparaiso, Chile July 18, 2017. (Photo by Rodrigo Garrido/Reuters) 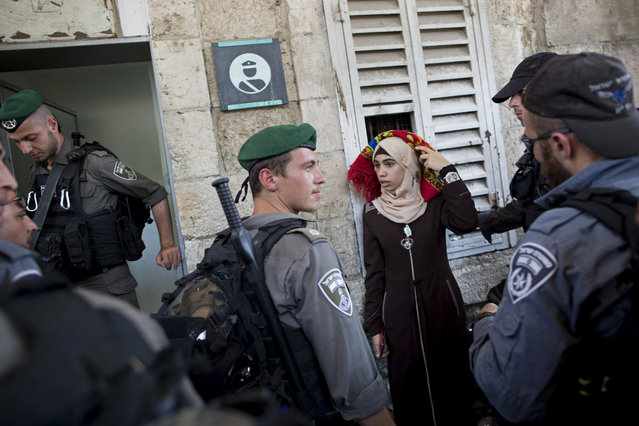 Israeli border police officers stop a Palestinian woman for a security check as Palestinians gather for prayer at the Lion's Gate, following an appeal from clerics for Muslims to pray in the streets instead of the Al-Aqsa Mosque compound, in Jerusalem's Old City, Wednesday, July 19, 2017. A dispute over metal detectors has escalated into a new showdown between Israel and the Muslim world over the contested Jerusalem shrine that has been at the center of violent confrontations in the past. (Photo by Oded Balilty/AP Photo) 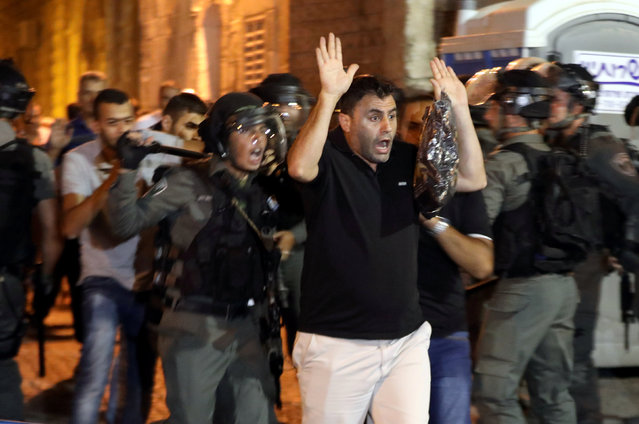 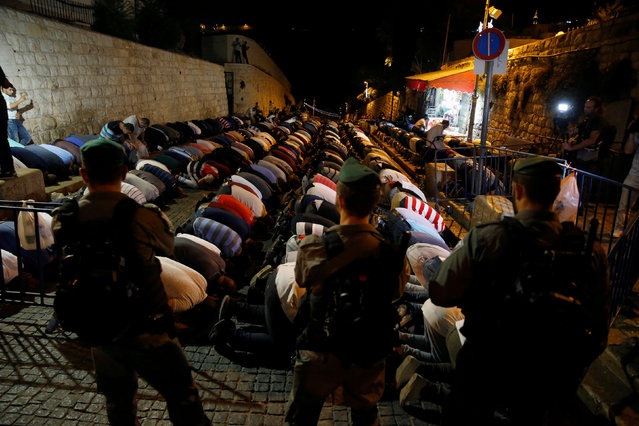 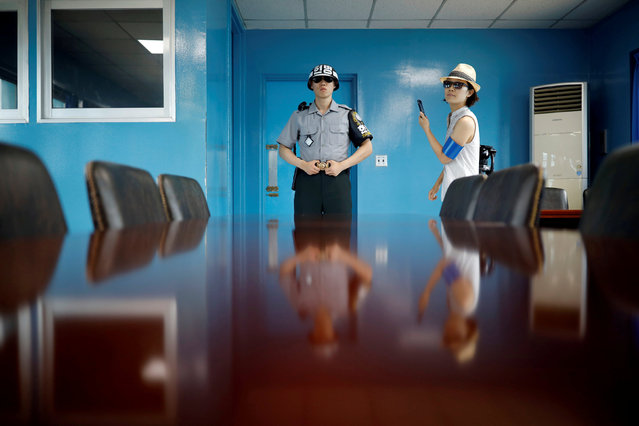 A journalist takes a photograph of a South Korean soldier standing guard at the truce village of Panmunjom, South Korea July 19, 2017. (Photo by Kim Hong-Ji/Reuters) 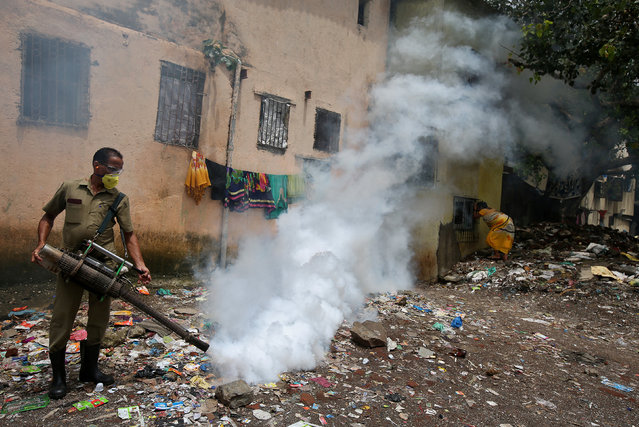 A municipal worker fumigates a slum area to prevent the spread of dengue fever and other mosquito-borne diseases in Mumbai, India, July 19, 2017. (Photo by Shailesh Andrade/Reuters) 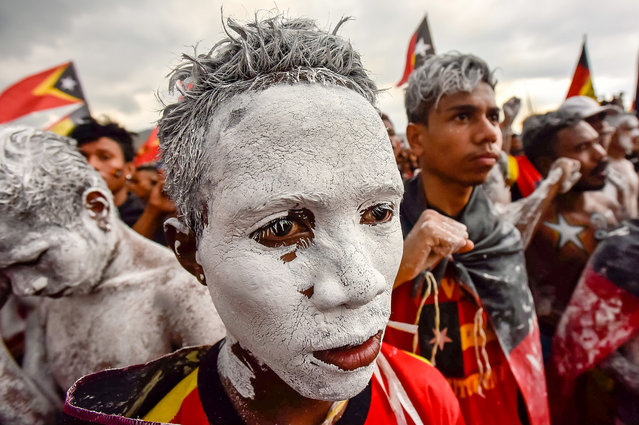 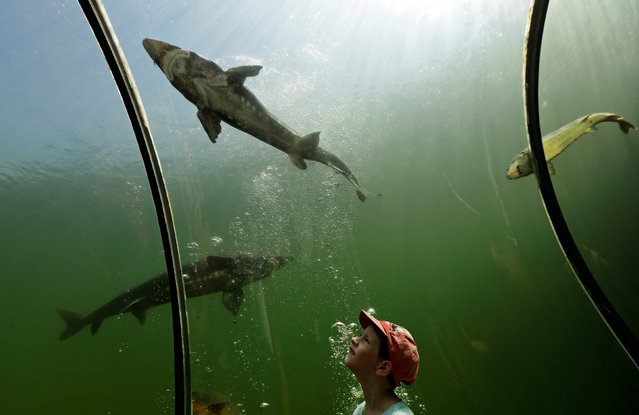 A child looks at fish as he stands inside an underwater tunnel at the botanical and freshwater exposition “Live Water” in the village of Modra, Czech Republic, July 18, 2017. (Photo by David W. Cerny/Reuters) 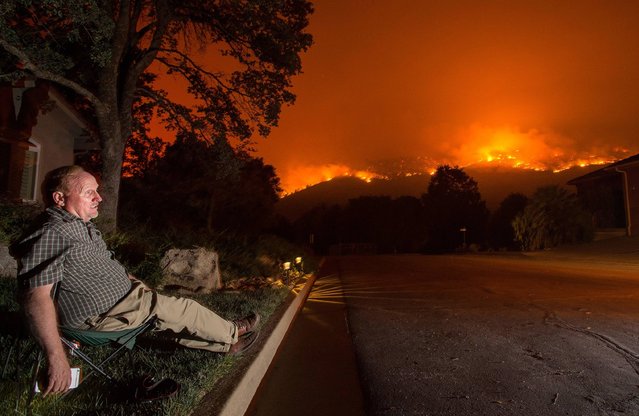 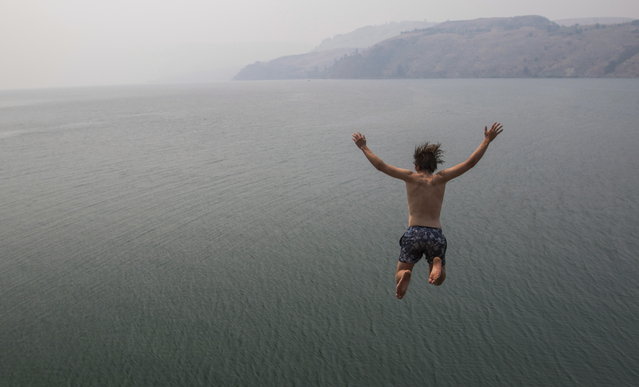