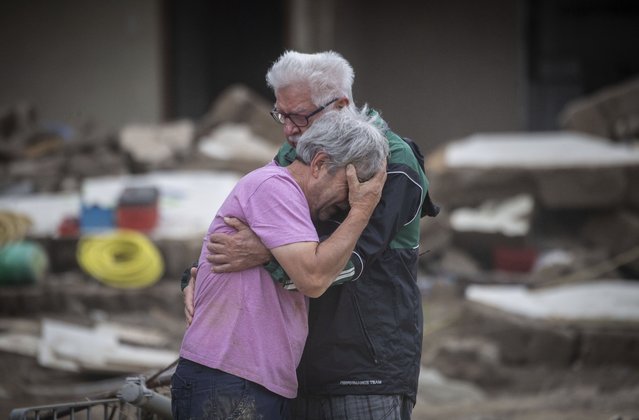 Two brothers weep in each other's arms in front of their parents' house, which was destroyed by the flood in Altenahr, Germany, Monday, July 19, 2021. Numerous houses in the town were completely destroyed or severely damaged, there are numerous fatalities. (Photo by Boris Roessler/dpa via AP Photo) 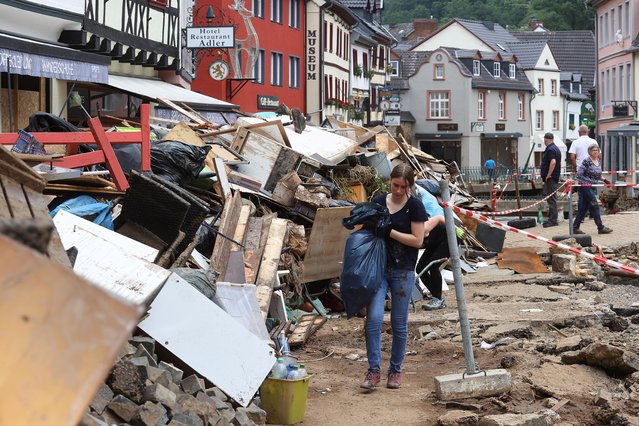 A woman carries a bag in an area affected by floods caused by heavy rainfalls in Bad Muenstereifel, Germany, July 19, 2021. (Photo by Wolfgang Rattay/Reuters) 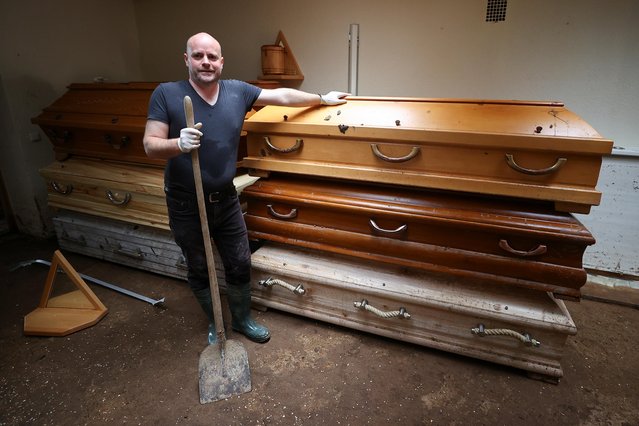 Undertaker Gerth Lethert poses at his workshop in an area affected by floods caused by heavy rainfalls in Bad Muenstereifel, Germany, July 19, 2021. (Photo by Wolfgang Rattay/Reuters) 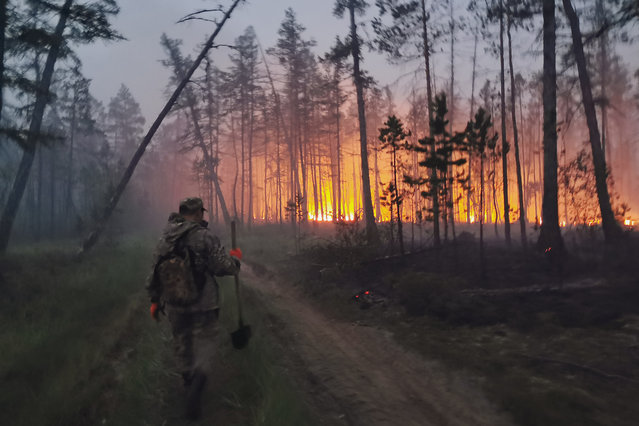 A volunteer heads to douse a forest fire in the republic of Sakha also known as Yakutia, Russia Far East, Saturday, July 17, 2021. Russia has been plagued by widespread forest fires, blamed on unusually high temperatures and the neglect of fire safety rules, with the Sakha-Yakutia region in northeastern Siberia being the worst affected. (Photo by Ivan Nikiforov/AP Photo) 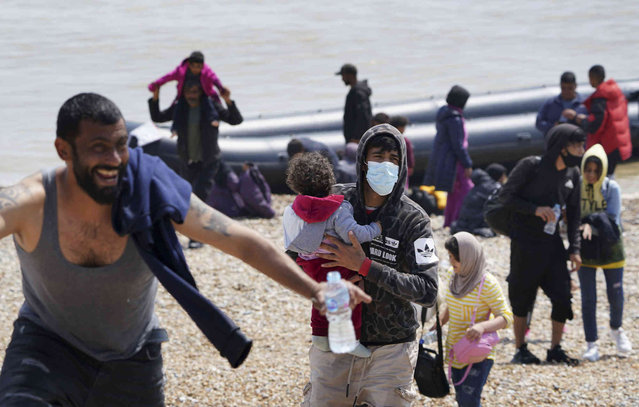 People thought to be migrants make their way up the beach after arriving on a small boat at Dungeness in Kent, England, Monday, July 19, 2021. They were later taken away by Border Force staff. (Photo by Gareth Fuller/PA Wire via AP Photo) 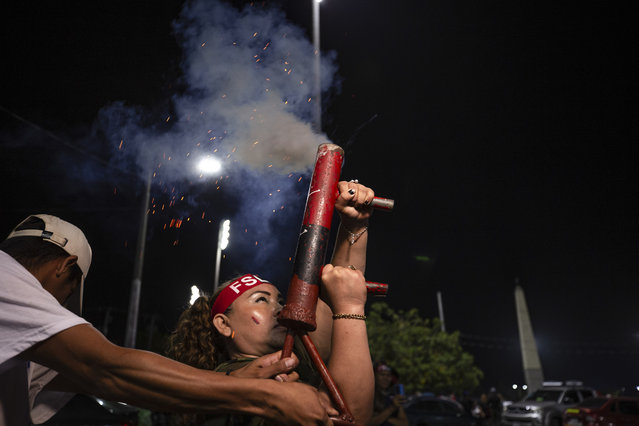 A woman fires a homemade mortar during commemorations for the 42nd anniversary of the triumph of the 1979 Sandinista Revolution that toppled dictator Anastasio Somoza in Managua, Nicaragua, late Sunday, July 18, 2021. (Photo by Miguel Andrés/AP Photo) 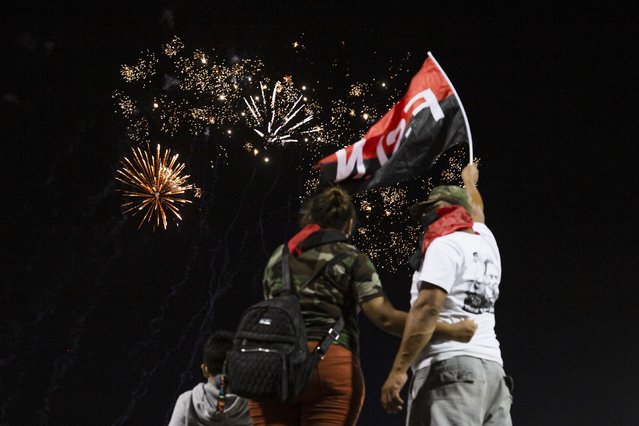 Supporters of the Sandinista National Liberation Front (FSLN) watch fireworks during commemorations for the 42nd anniversary of the triumph of the 1979 Sandinista Revolution that toppled dictator Anastasio Somoza in Managua, Nicaragua, early Monday, July 19, 2021. (Photo by Miguel Andrés/AP Photo) 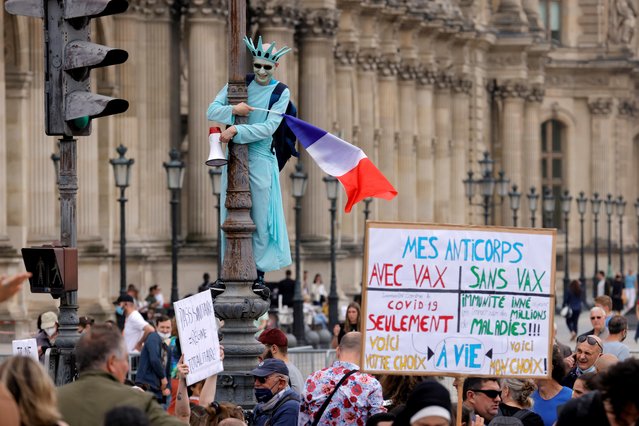 A demonstrator dressed as the statue of Liberty takes part in a protest against the new measures announced by French President Emmanuel Macron to fight the coronavirus disease (COVID-19) outbreak, in Paris, France, July 17, 2021. (Photo by Pascal Rossignol/Reuters) 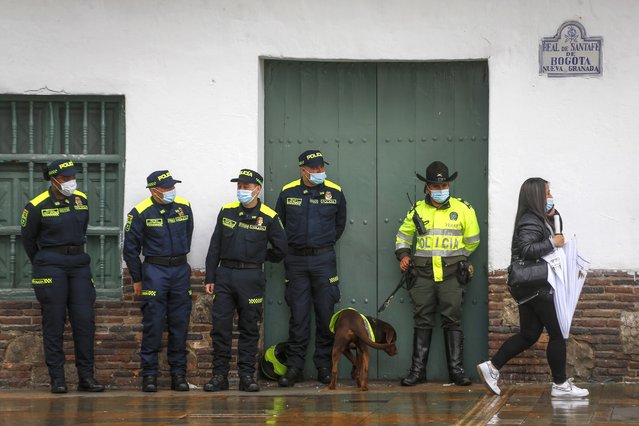 National Police wearing the force's new, blue uniforms stand by an officer wearing the old one, right with dog, as they stand guard on the sidelines of the ceremony presenting the new uniforms at Plaza de Bolivar in Bogota, Colombia, Monday, July 19, 2021. The uniforms changed from green to blue, and an arm patch features a QR code that allows anyone who scans it to see the officer's name, rank and badge number. (Photo by Ivan Valencia/AP Photo) 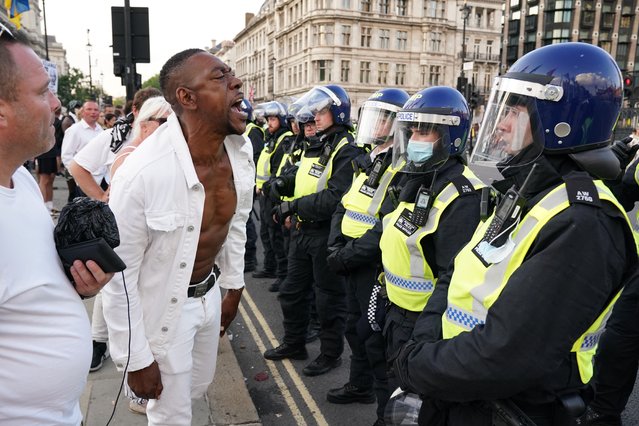 Police maintain a cordon as anti-vaccination protesters clash with officers during a demonstration in Parliament Square, London on Monday July 19, 2021, after the final legal restrictions were lifted in England. (Photo by Jonathan Brady/PA Images via Getty Images) 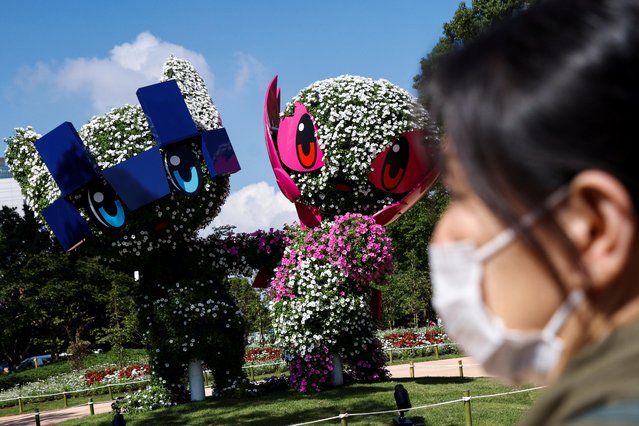 A woman stands in front of the Tokyo 2020 Olympic and Paralympic mascots Miraitowa and Someity as the coronavirus disease (COVID-19) pandemic continues in Tokyo, Japan, July 17, 2021. (Photo by Thomas Peter/Reuters) 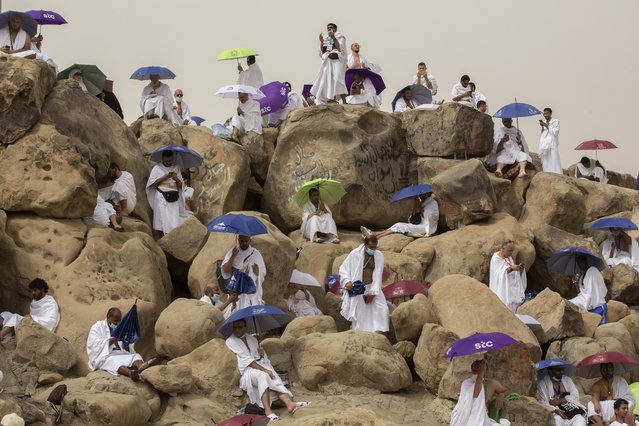 Muslim pilgrims pray on top of the rocky hill known as the Mountain of Mercy, on the Plain of Arafat, beside inscriptions which were left by pilgrims from previous years, during the annual hajj pilgrimage, near the holy city of Mecca, Saudi Arabia, Monday, July 19, 2021. The coronavirus has taken its toll on the hajj for a second year running. What once drew some 2.5 million Muslims from all walks of life from across the globe, the hajj pilgrimage is now almost unrecognizable in scale. (Photo by Amr Nabil/AP Photo) 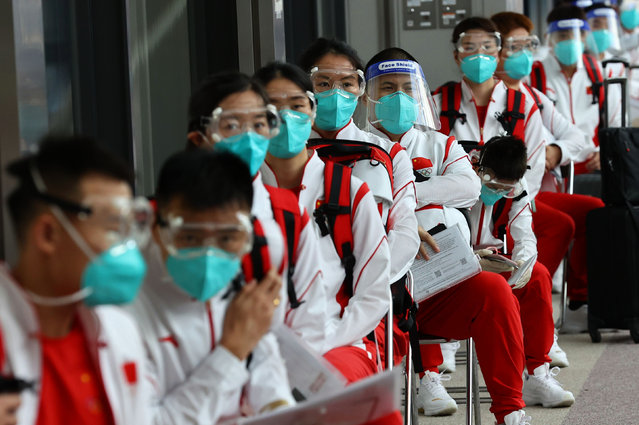 Members of China’s Olympic team wear face masks and face shields during the quarantine process after arriving at Narita International airport on July 19, 2021, ahead of the Tokyo 2020 Olympic Games. (Photo by Kim Kyung-Hoon/Reuters) 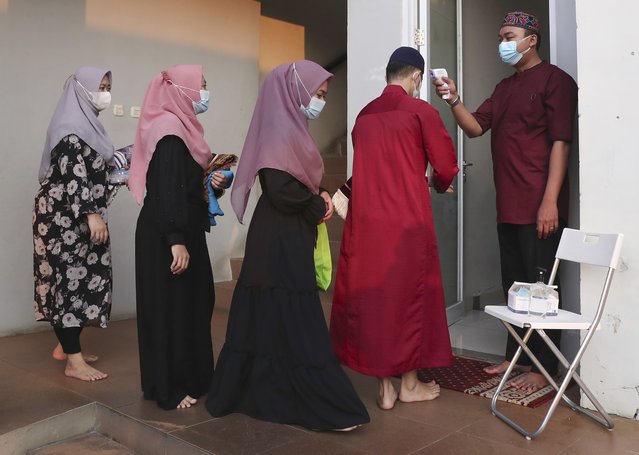 An official takes the body temperature reading of worshippers arriving for an Eid al-Adha prayer as to curb the spread of coronavirus during an Eid al-Adha prayer at Zona Madina mosque in Bogor, Indonesia,Tuesday, July 20, 2021. Muslims across Indonesia marked a grim Eid al-Adha festival for a second year Tuesday as the country struggles to cope with a devastating new wave of coronavirus cases and the government has banned large gatherings and toughened travel restrictions. (Photo by Tatan Syuflana/AP Photo) 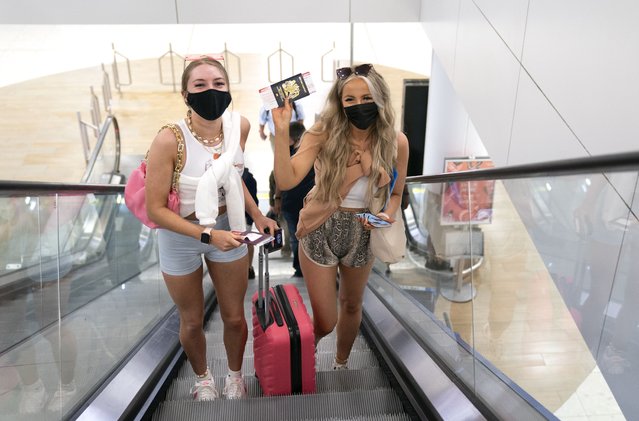 Friends Poppy (left) and Shannon, both aged 20 and from Glasgow, head towards the departure gate at Glasgow Airport after checking in for their flight to Ibiza on Monday, July 19, 2021. (Photo by Jane Barlow/PA Images via Getty Images) 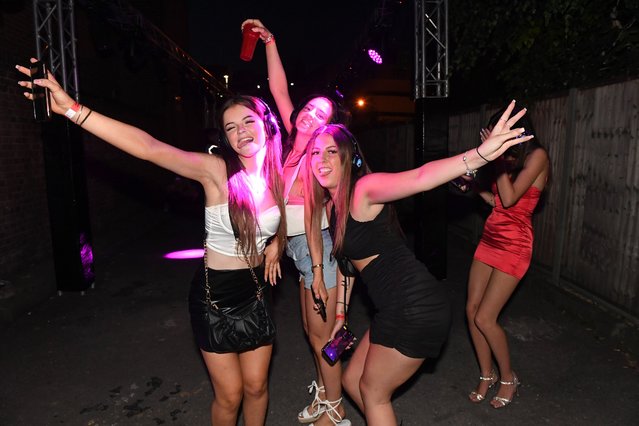 Partiers at a nightclub in Portsmouth, Hampshire, United Kingdom on July 19, 2021. (Photo by Paul Jacobs/Picture Exclusive) 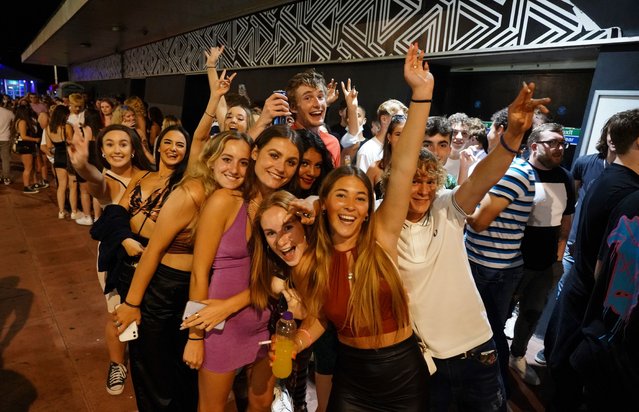 Clubbers queue around the block at a few minutes to midnight waiting for Covid-19 restrictions to be dropped and for Pryzm nightclub to open its doors once more on July 18, 2021 in Brighton, England. At a minute past midnight, England dropped most of its remaining Covid-19 social restrictions, such as those requiring indoor mask-wearing and limits on group gatherings. These changes come despite rising infections, pitting the country's vaccination programme against the virus's more contagious Delta variant. (Photo by Chris Eades/Getty Images) 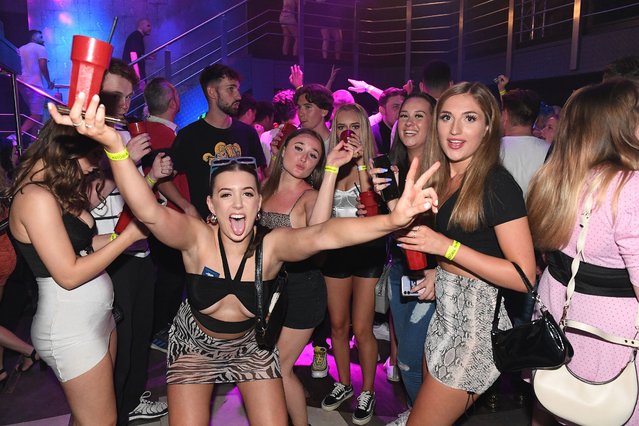 Partygoers dance the night away on July 19, 2021 at Astoria Nightclub in Portsmouth, Hampshire, United Kingdom which opened its doors at 12:01am on Monday. (Photo by Paul Jacobs/Picture Exclusive) 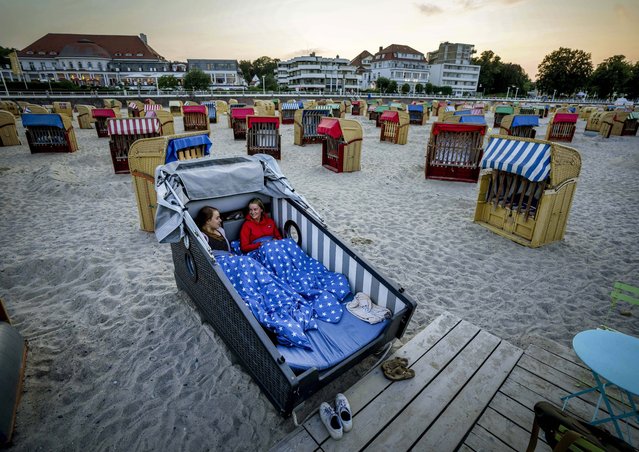