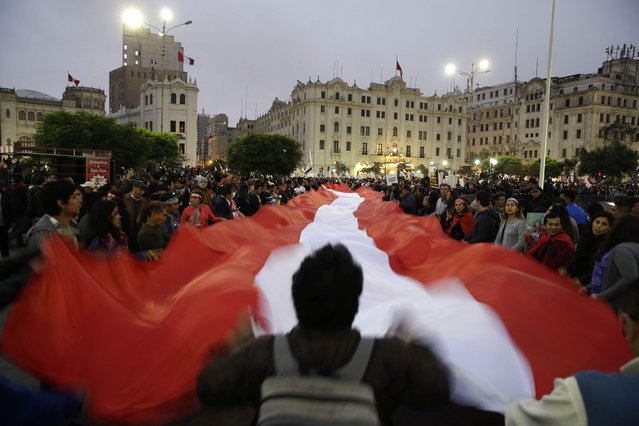 Demonstrators protest against corruption at San Martin plaza, in Lima, Peru, Thursday, July 19, 2018. The latest scandal to embroil this South American nation has ensnared some of the country's highest-ranking judges and political officials and comes just four months after then-President Pedro Pablo Kuczynski stepped down in a separate corruption probe. (Photo by Martin Mejia/AP Photo) 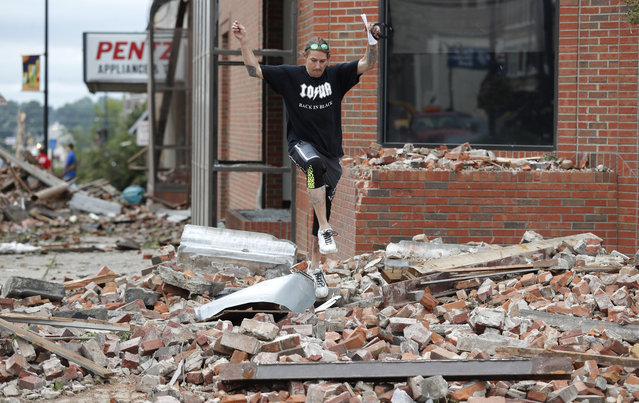 A local resident leaps over rubble from a tornado damaged building, Friday, July 20, 2018, in Marshalltown, Iowa. Several buildings were damaged Thursday evening by a tornado in the main business district in town including the historic courthouse. (Photo by Charlie Neibergall/AP Photo) 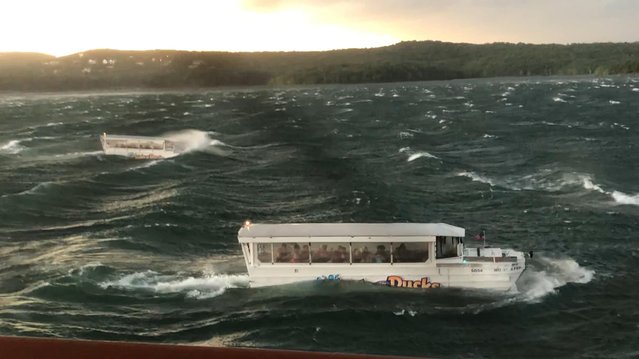 An image from video shows two duck boats on Table Rock Lake near Branson, Mo., during a thunderstorm Thursday, July 19, 2018. A duck boat with 29 passengers and a two-member crew sank during the storm, with 17 deaths confirmed by authorities. (Photo by Trent Behr/The Washington Post) 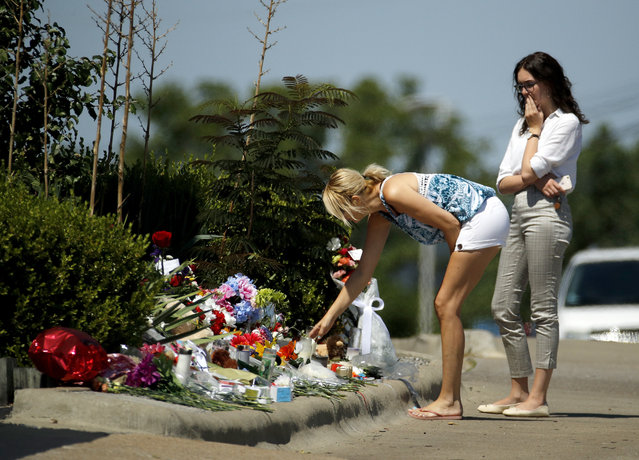 People look at a memorial in front of Ride the Ducks Saturday, July 21, 2018 in Branson, Mo. One of the company's duck boats capsized Thursday night resulting in several deaths on Table Rock Lake. (Photo by Charlie Riedel)/AP Photo 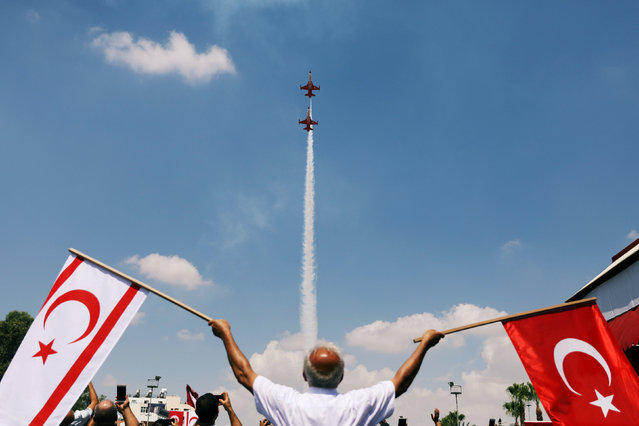 Turkey's acrobatic aircrafts fly over a parade to mark the 1974 Turkish invasion of Cyprus in response to a briefly lived Greek-inspired coup, in the Turkish Cypriot northern part of the divided city of Nicosia, Cyprus July 20, 2018. (Photo by Yiannis Kourtoglou/Reuters) 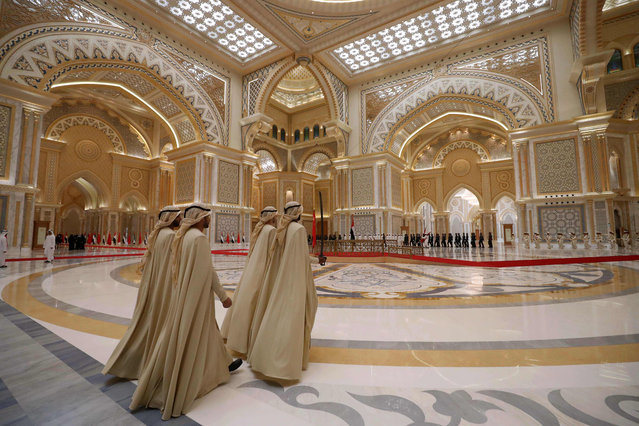 Emirati honorary guards walk through a reception hall at the presidential palace in Abu Dhabi during Chinese President Xi Jinping' s visit to the UAE capital on July 20, 2018. President Xi Jinping arrived in Abu Dhabi on July 19, 2018 for a three- day visit, after the announcement of oil and trade deals between China and the UAE. (Photo by Karim Sahib/AFP Photo) 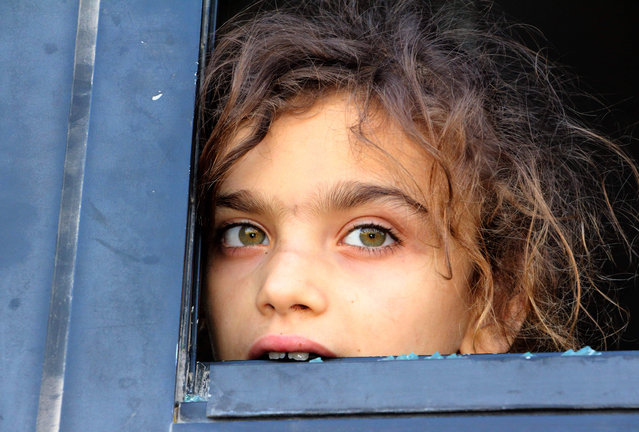 An evacuated Syrian girl from the area of Fuaa and Kafraya in the Idlib province, looks out of a broken bus window as it passes the al- Eis crossing south of Aleppo during the evacuation of several thousand residents from the two pro- regime towns in northern Syria on July 19, 2018. As the buses passed through rebel- held territory, people threw rocks at them, which shattered the windows during the evacuation which put an end to one of the longest sieges of the country' s seven- year civil war. Fuaa and Kafraya were the last remaining areas under blockade in Syria and a rare example of pro- government towns surrounded by rebel forces. (Photo by Ibrahim Yasouf/AFP Photo) 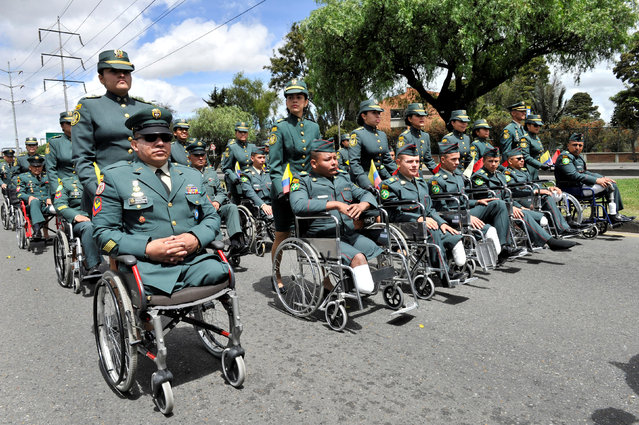 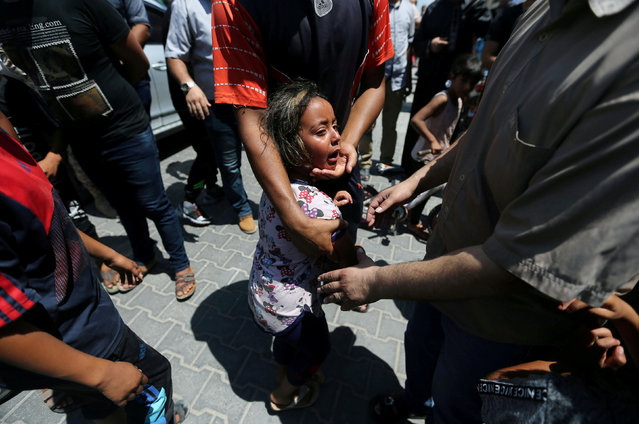 A relative of Palestinian Hamas member Abed Alkareem Redwan, who was killed in an Israeli air strike, mourns during his funeral in Rafah in the southern Gaza Strip July 20, 2018. (Photo by Ibraheem Abu Mustafa/Reuters) 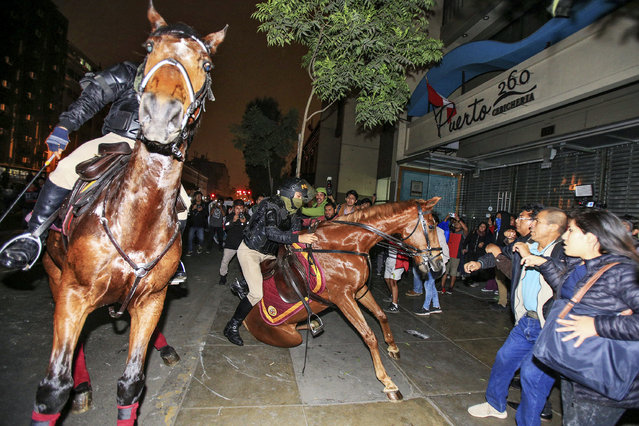 A police horse falls to the ground during the “Great March For a Total Reform of the Political and Judicial System”, in Lima, Peru, 19 July 2018. The march was organized in response to recently disclosed corruption cases allegedly involving judges and members of the National Magistracy Council. (Photo by German Falcon/EPA/EFE) 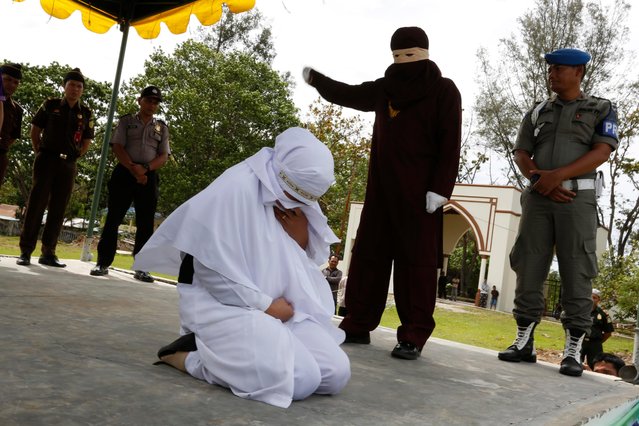 An Acehnese woman (L) faces a public caning punishment, for having a s*x relationship outside marriage, in Jantho, Aceh, Indonesia, 20 July 2018. Aceh is the only province in Indonesia that has implemented the Sharia law as a positive law and considers lesbian, gay, bisexual relationships and s*x outside of marriage as Sharia law violations. (Photo by Hotli Simanjuntak/EPA/EFE) 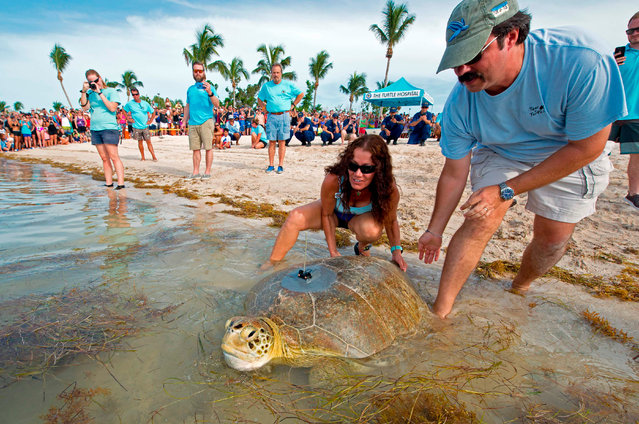 In this image released by the Florida Keys News Bureau, Dan Evans (R) of the Sea Turtle Conservancy, and Bette Zirkelbach (C), manager of the Turtle Hospital, give “Little Money” a push into the Atlantic Ocean on July 20, 2018, in Marathon, Florida. The female green sea turtle was one of two reptiles released Friday off the Florida Keys to become part of the “Tour de Turtles”, that features online tracking of 17 sea turtles that have been or will be released off Florida and in the Caribbean. (Photo by Andy Newman/AFP Photo) 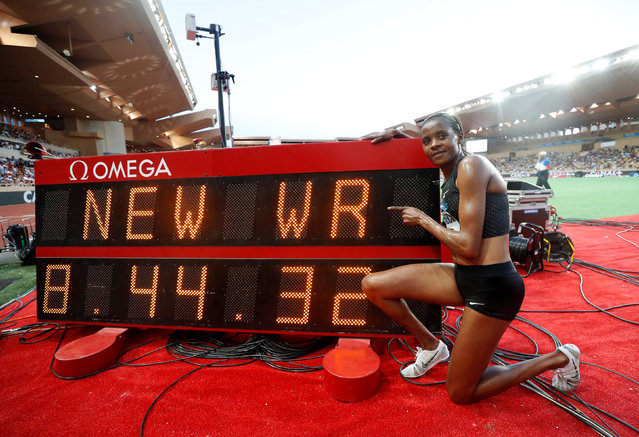 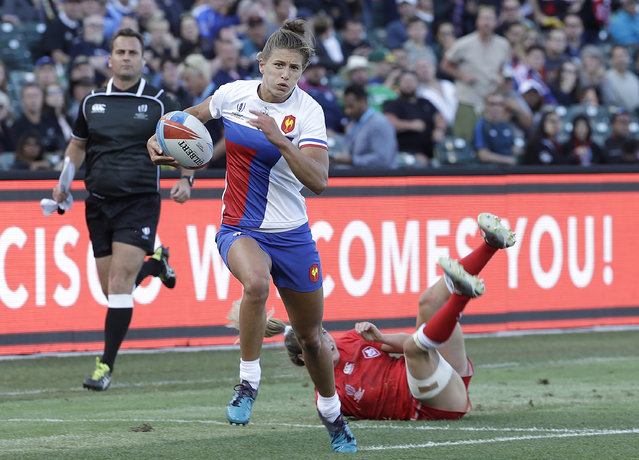 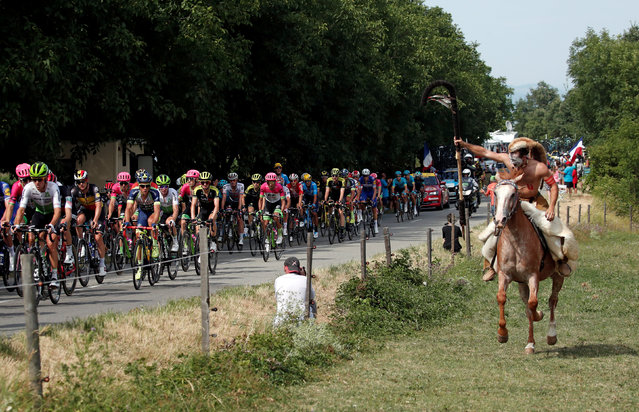 A man rides his horse alongside the pack during the thirteenth stage of the Tour de France cycling race over 169.5 kilometers (105.3 miles) with start in Bourg d' Oisans and finish in Valence, France, Friday July 20, 2018. (Photo by Benoit Tessier/Reuters) 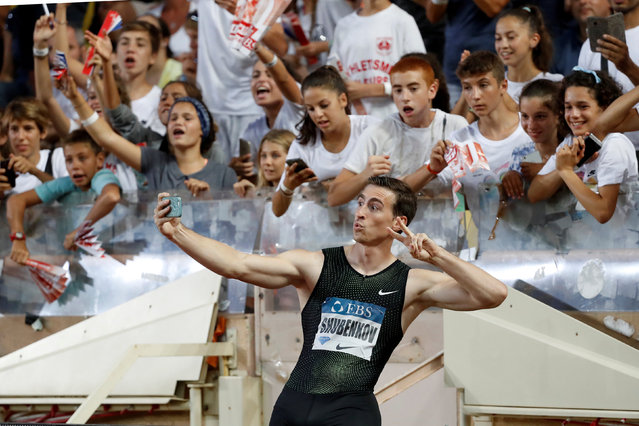 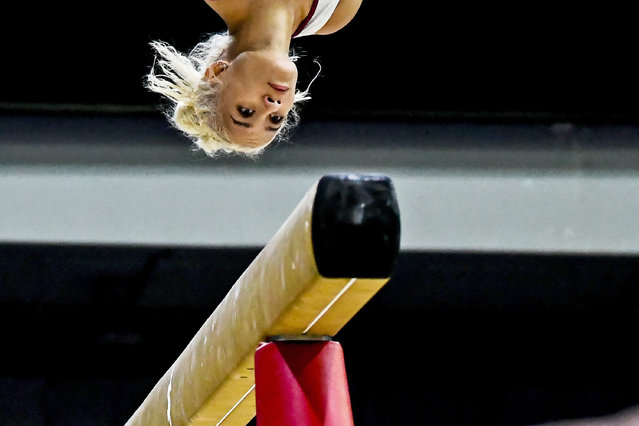 A Puerto Rican gymnast trains on the eve of the inauguration of the 2018 Central American and Caribbean Games (CAC) in Barranquilla, Colombia, on July 18, 2018. (Photo by Luis Acosta/AFP Photo) 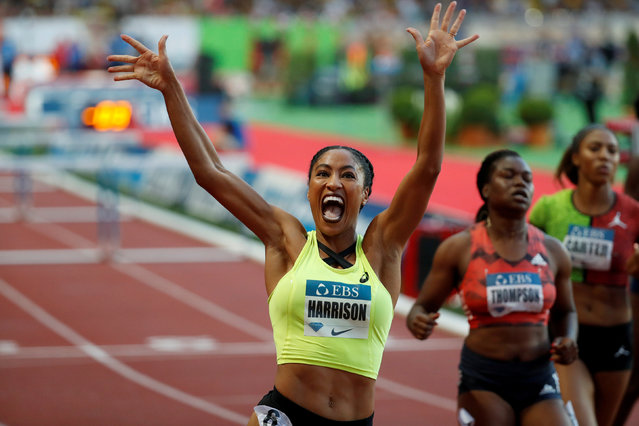 Queen Harrison of the US celebrates after victory in the women' s 100 metres hurdles during the IAAF Diamond League athletics “Herculis” meeting at The Stade Louis II Stadium in Monaco on July 20, 2018. (Photo by Eric Gaillard/Reuters) 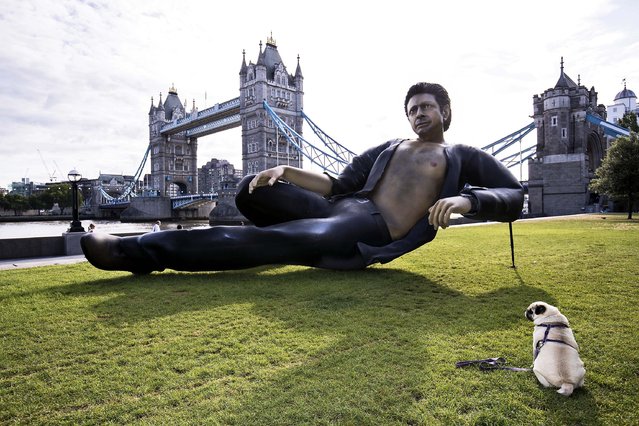 Tightrope walker Tatian-Mosio Bongonga advances on a tightrope as she scales the Monmartre hill towards the Sacre Coeur Basilica (not pictured) in Paris, France, July 20, 2018. (Photo by Philippe Wojazer/Reuters) 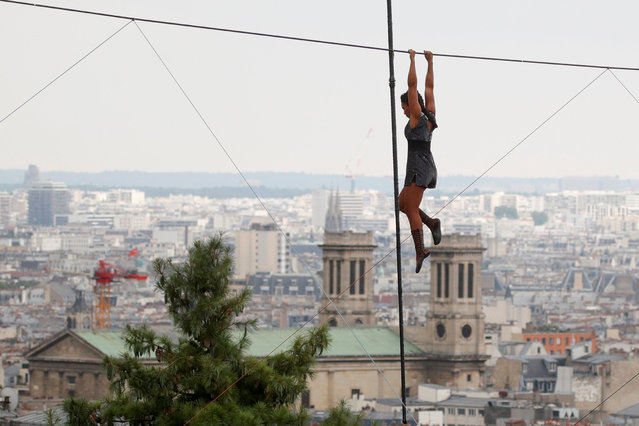 Tightrope walker Tatian-Mosio Bongonga hangs from a tightrope as she pauses while scaling the Monmartre hill towards the Sacre Coeur Basilica (not pictured) in Paris, France, July 20, 2018. (Photo by Philippe Wojazer/Reuters) 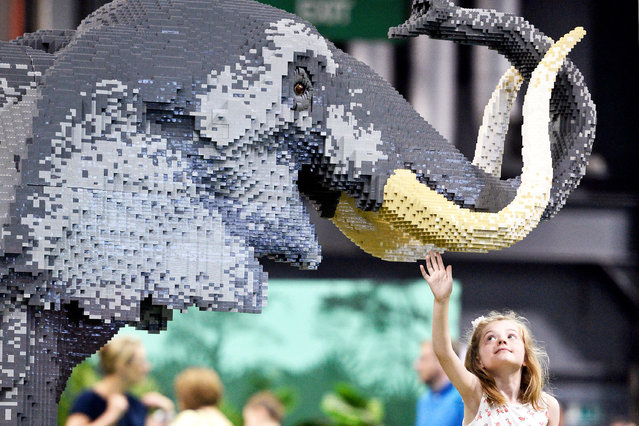 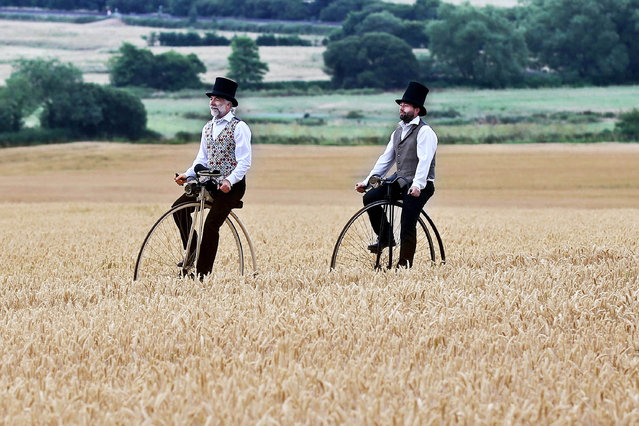 Alistair Cope and son Sebastian make the point that there are not many places you can't cycle your penny farthing including along the “tram lines” of a field of wheat. After gaining the farmers full permission to “Give it a go” the pair made for a very unusual sight as a pair of penny farthings emerged cautiously through the cerial crop, probably even historically the first time in a wheat field. All this at Kilmington in East Devon, UK on July 18, 2018. Alistair is the founder of the cycle organisation Velo Vintage and their moto is “Time to cycle, take tea, converse and dress with style”. (Photo by South West News Service) 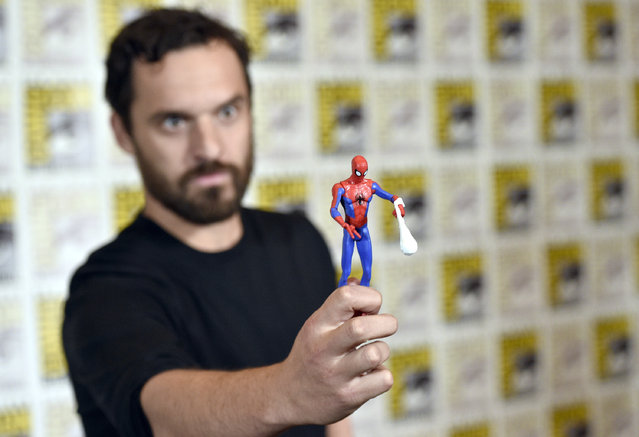