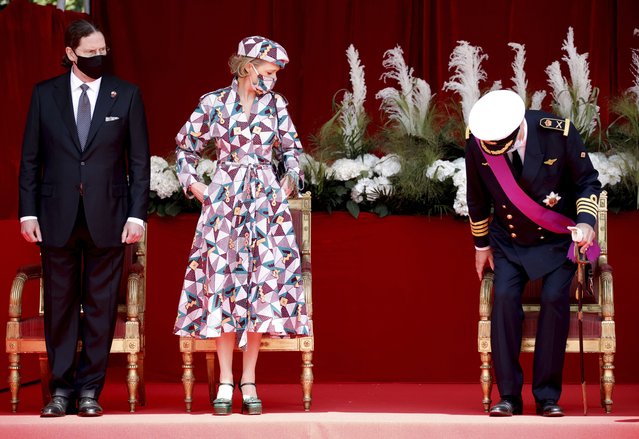 Belgium's Princess Delphine, center, her husband James O'Hare, left, and Belgium's Prince Laurent, right, take their places on the Royal tribune prior to the National Day parade in Brussels, Wednesday, July 21, 2021. Belgium celebrates its National Day on Wednesday in a scaled down version due to coronavirus, COVID-19 measures. (Photo by Olivier Matthys/AP Photo) 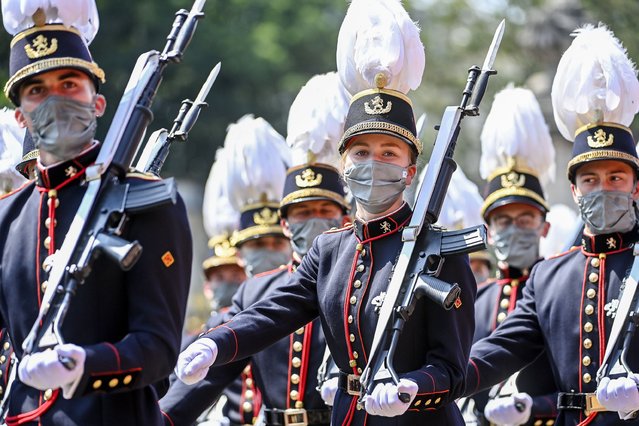 Belgium's Crown Princess Elisabeth, center, marches past the Royal tribune with cadets of the military school during the National Day parade in Brussels, Wednesday, July 21, 2021. (Photo by Laurie Dieffembacq/Pool Photo via AP Photo) 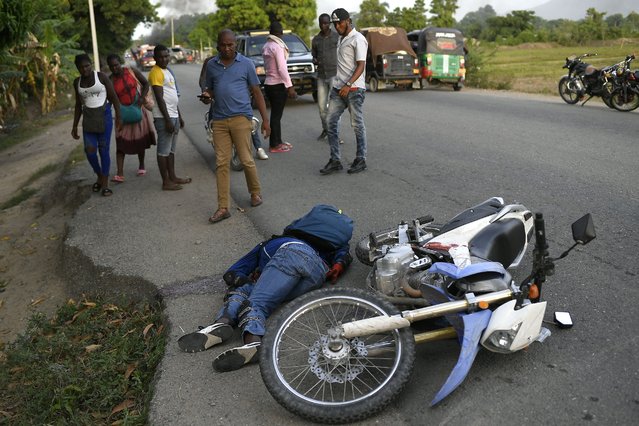 A man lies dead on the road after violence broke out and hundreds of workers fled the area when demonstration near the home town of late President Jovenel Moise grew violent, ahead of his funeral in Quartier Morin a district of Cap Haitien, in northern Haiti, Wednesday, July 21, 202. (Photo by Matias Delacroix/AP Photo) 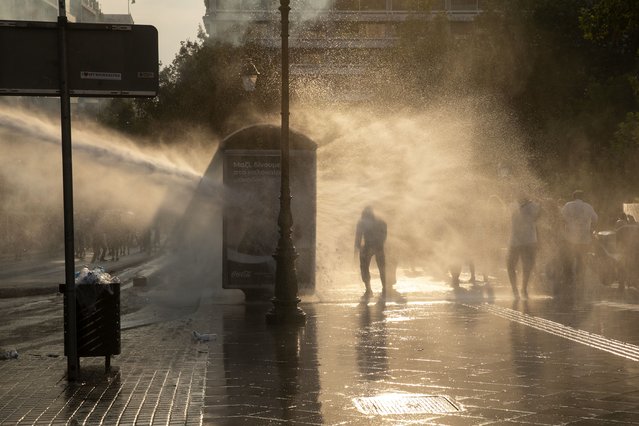 Greek police use tear gas and water cannons to disperse anti-vaccine protesters during a rally at Syntagma square, central Athens, on Wednesday, July 21, 2021. Thousands of people protested against Greek government's measures to curb rising COVID-19 infections and drive up vaccinations in the country where almost 50% of Greeks and country residents have received at least one dose of the vaccine. (Photo by Yorgos Karahalis/AP Photo) 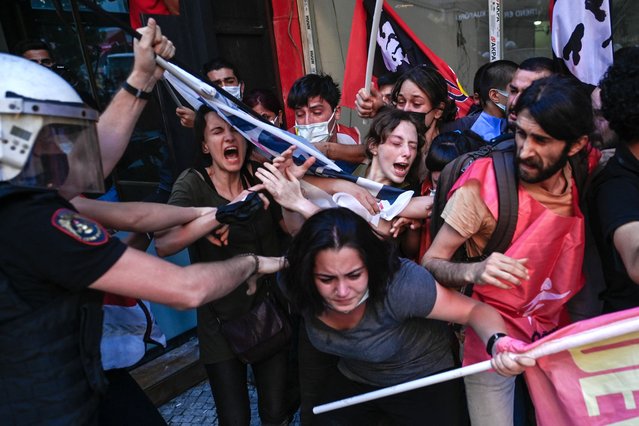 Protesters clash with police officers during a rally, in the Kadikoy district, in Istanbul, on July 20, 2021, called to mark on the anniversary of the 2015 suicide attack that took place in the southern Turkish town of Suruc. Leftist youth gathered to protest as they mark the anniversary of a suicide bomb attacks which killed 31 people in Suruc, where activists had gathered to prepare for an aid mission to the nearby Syrian town of Kobane. It was one of the deadliest attacks in Turkey in recent years, and, the first time the government has directly accused the Islamic State group of carrying out an act of terror on Turkish soil. (Photo by Bulent Kilic/AFP Photo) 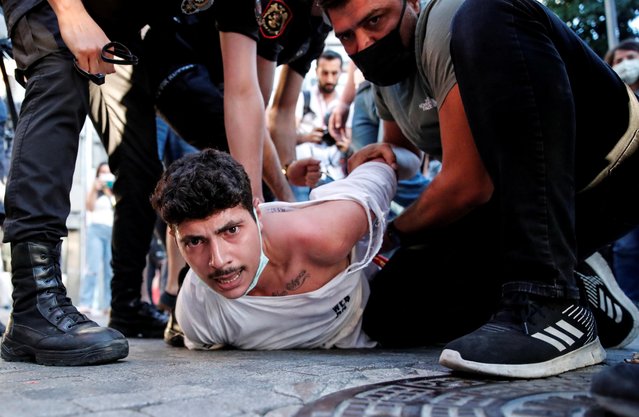 Police detain an activist during a protest, on the anniversary of a bomb attack that killed 34 people in 2015 in the south-eastern Turkish town of Suruc, in Istanbul, Turkey, July 20, 2021. (Photo by Kemal Aslan/Reuters) 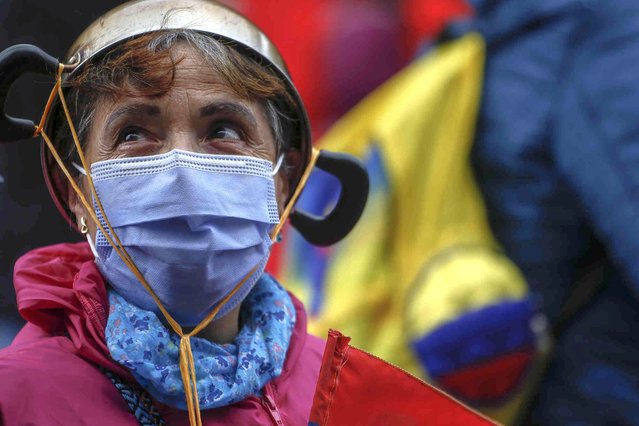 A woman takes part in an anti-government protest in Bogota, Colombia, Tuesday, July 20, 2021, as the county marks its Independence Day. (Photo by Ivan Valencia/AP Photo) 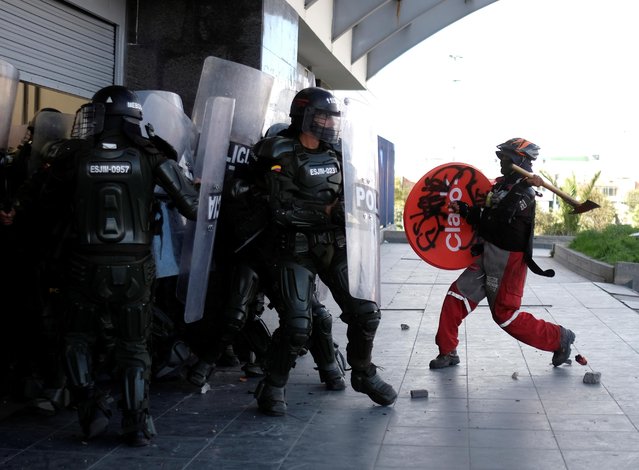 A demonstrator raises an axe towards riot police during anti-government protests, as Colombia commemorates Independence Day, in Bogota on July 20, 2021. (Photo by Santiago Mesa/Reuters) 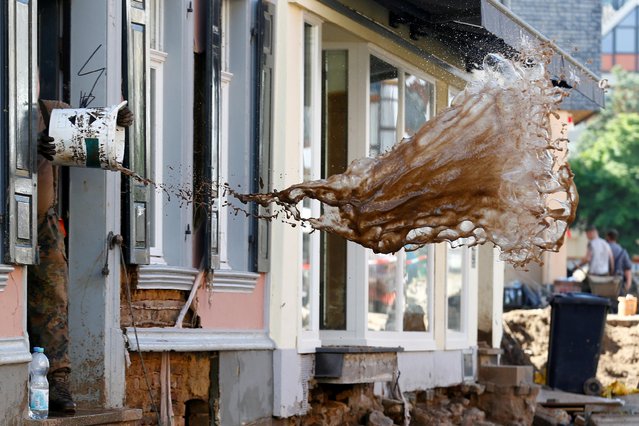 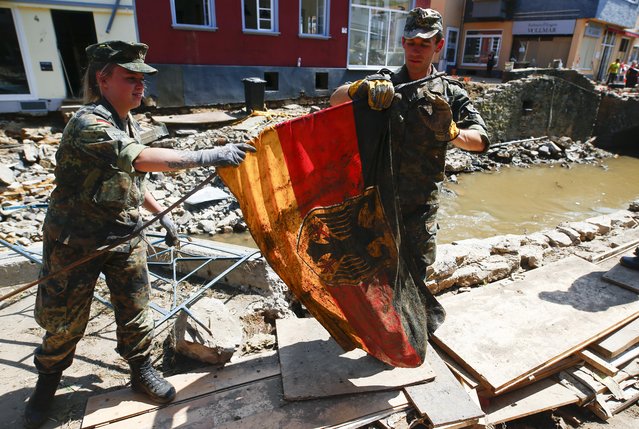 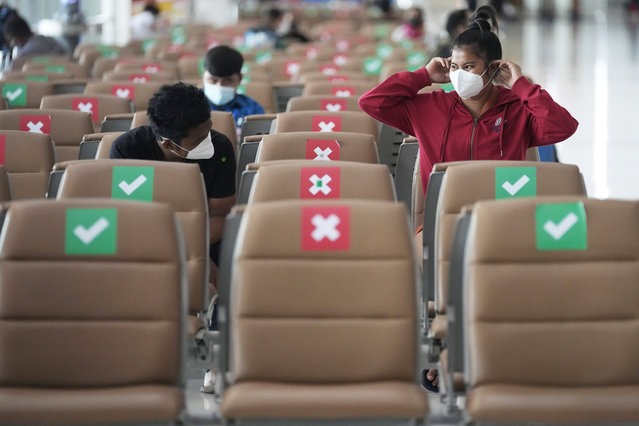 Passengers sit spaced apart while wearing face masks to help curb the spread of the coronavirus at Suvarnabhumi airport in Bangkok, Thailand, Wednesday, July 21, 2021. The Civil Aviation Authority of Thailand has ordered a halt to all domestic flights operating from the most severely affected provinces effective Wednesday. Exceptions are allowed for flights to destinations that are part of a plan that allows vaccinated travelers from abroad to stay for two weeks on popular islands such as Phuket and Samui without quarantine confinement. (Photo by Sakchai Lalit/AP Photo) 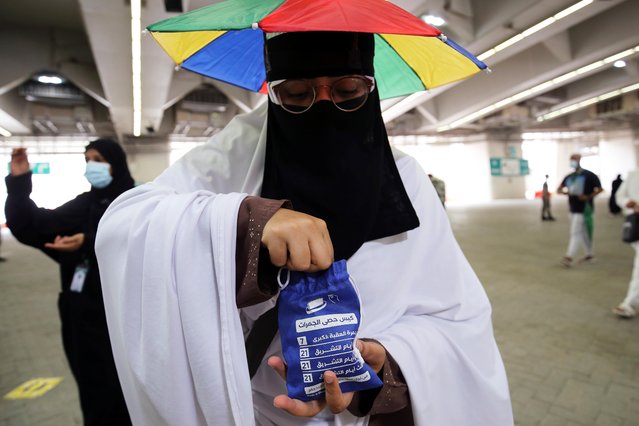 A Muslim pilgrim grabs stones to cast them at a pillar symbolizing Satan during the annual Haj pilgrimage, amid the coronavirus disease (COVID-19) pandemic, in Mina, near the holy city of Mecca, Saudi Arabia, July 21, 2021. (Photo by Ahmed Yosri/Reuters) 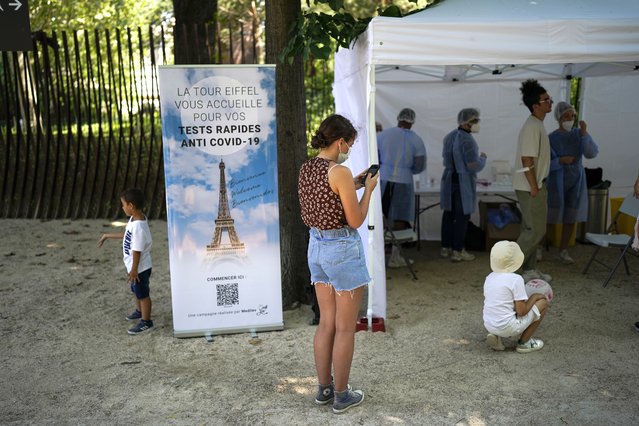 A visitor registers for a covid-19 test at the Eiffel Tower in Paris, Wednesday, July 21, 2021. Visitors now need a special COVID pass to ride up the Eiffel Tower or visit French museums or movie theaters, the first step in a new campaign against what the government calls a “stratospheric” rise in delta variant infections. (Photo by Daniel Cole/AP Photo) 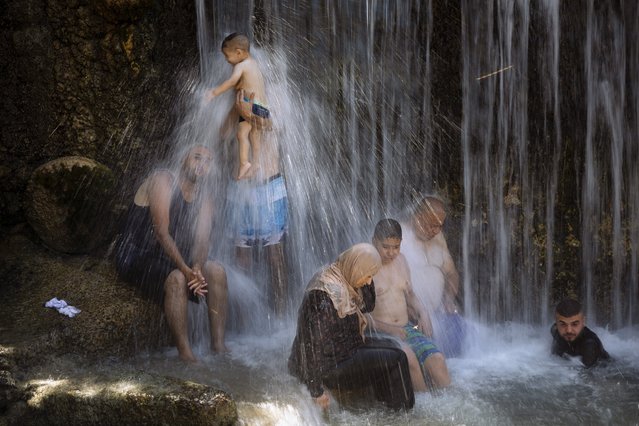 Israeli Arabs stand under a waterfall during the Muslim Eid al-Adha holiday at the Gan HaShlosha national park near the northern Israeli town of Beit Shean, Wednesday, July 21, 2021. Eid al-Adha meaning “Feast of Sacrifice”, this most important Islamic holiday marks the willingness of the Prophet Ibrahim (Abraham to Christians and Jews) to sacrifice his son. During the holiday, which in most places lasts four days, Muslims slaughter sheep or cattle, distribute part of the meat to the poor. (Photo by Oded Balilty/AP Photo) 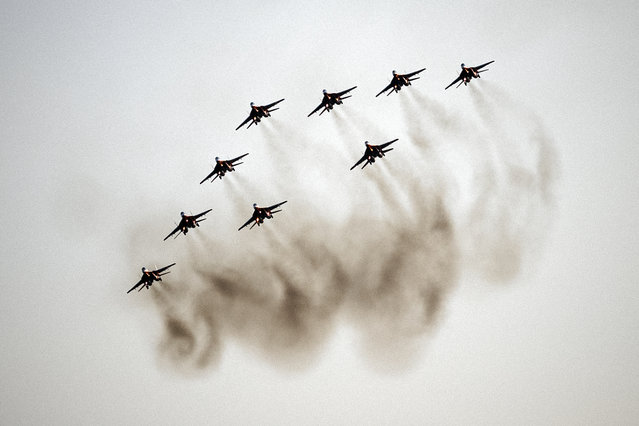 Russian Air Force aerobatic teams “Strizhi” (Swifts) on MiG-29 aircrafts and “Russian Knights” in Su-27 aircrafts perform during an air show at the MAKS 2021 International Aviation and Space Salon, in Zhukovsky, outside Moscow, on July 20, 2021. Russian President got a sneak peek of a next-generation stealth fighter jet dubbed “The Checkmate” ahead of the official unveiling later in the day. (Photo by Dimitar Dilkoff/AFP Photo) 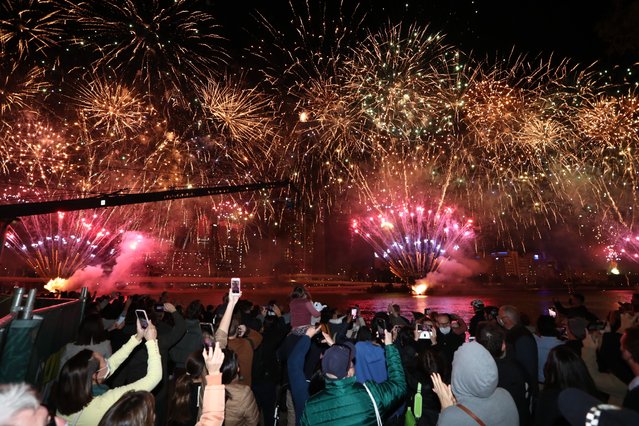 People celebrate in Brisbane, Australia, Wednesday, July 21, 2021, following an announcement by the International Olympic Committee that Brisbane was picked to host the 2032 Olympics. The Australian city was the inevitable winner of a one-candidate race steered by the IOC to avoid rival bids. (Photo by Jason O'Brien/AAP Image via AP Photo) 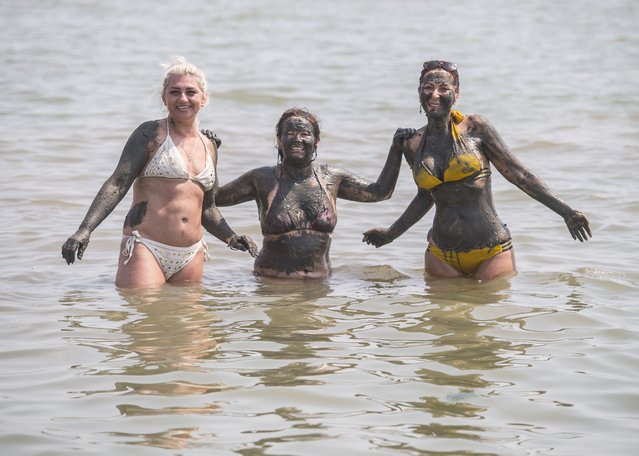 Three women cover themselves in mud while enjoying the hot weather at Southend beach, Essex in southeast England on Wednesday, July 21, 2021. (Photo by Ian West/PA Images via Getty Images) 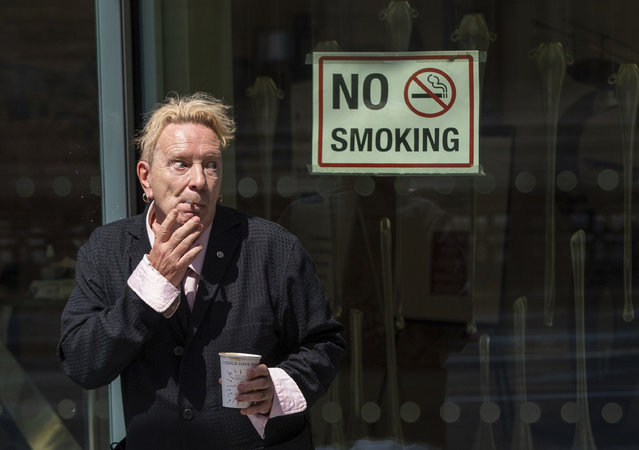 John Lydon, also known as Johnny Rotten (he is best known as the lead singer of the late-1970s British punk band the s*x Pistols), outside the Hight Court Rolls Building in London, where he is giving evidence in a hearing between two former s*x Pistols band members and the band frontman over the use of their songs in a television series, Wednesday July 21, 2021. Drummer Paul Cook and the band's former guitarist, Steve Jones, are suing the Pistols' former lead singer to allow their songs to be used in a TV series. (Photo by Dominic Lipinski/PA Wire via AP Photo)
Edit Del
22 Jul 2021 08:40:00, post received 0 comments
Publication archive:
←   →
Popular tags:
All tags
Last searches: