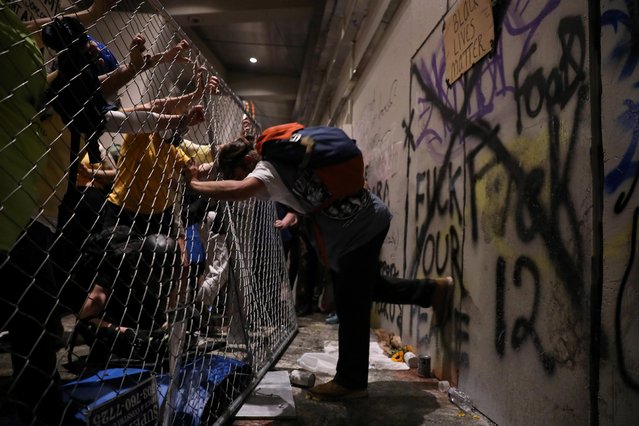 Demonstrators try to break into a federal building during a protest against racial inequality, police violence, and the presence of federal law enforcement officers, deployed under the Trump administration's new executive order to protect federal monuments and buildings in Portland, Oregon, U.S., July 21, 2020. (Photo by Caitlin Ochs/Reuters) 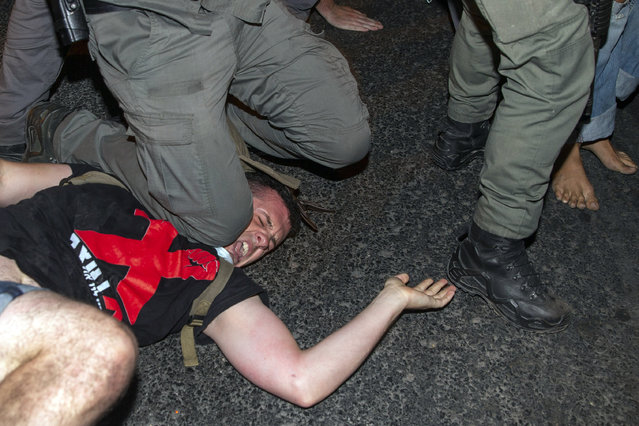 An Israeli police officer puts his knee on a demonstrator to make an arrest during a protest against Israel's Prime Minister Benjamin Netanyahu outside his residence in Jerusalem, early Wednesday, July 22, 2020. (Photo by Ariel Schalit/AP Photo) 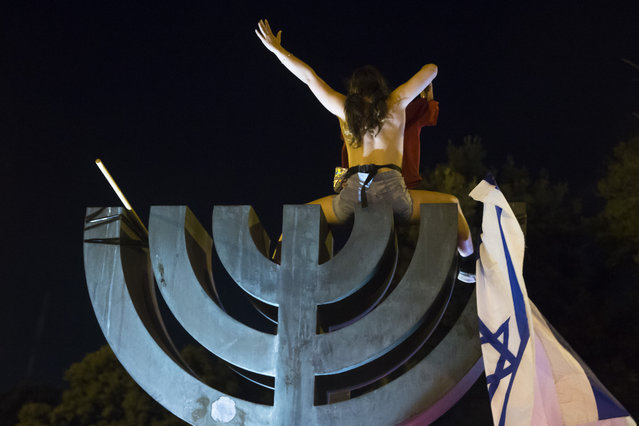 A woman sits on the Israeli national emblem during a demonstration on July 21, 2020 in Jerusalem, Israel. Demonstrations continue against Prime Minister Benjamin Netanyahu and the government's handling of the coronavirus (COVID-19) crisis. (Photo by Amir Levy/Getty Images) 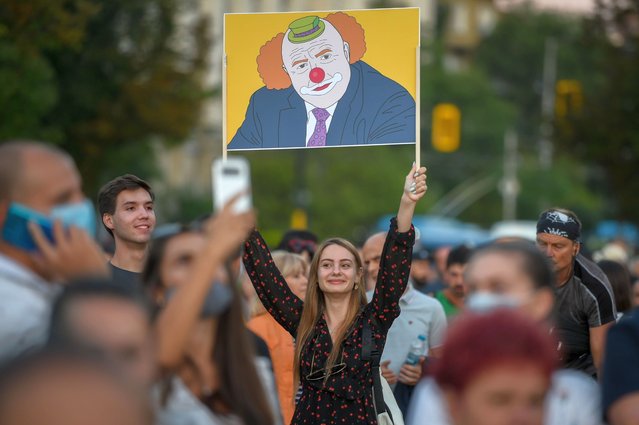 A woman holds a placard depicitng Bulgarian prime minister Boyko Borisov as a clown during an anti-government protest in Sofia, on July 20, 2020. Thousands of young people have been demanding for two weeks in Sofia for the resignation of the government which they accuse of protecting the oligarchy. Shaken by discontent that he did not see coming, Bulgarian leader Boyko Borissov is trying to save his skin at the head of the government after a decade of playing the balancing act between the interests of the great powers and the clans of oligarchs. (Photo by Nikolay Doychinov/AFP Photo) 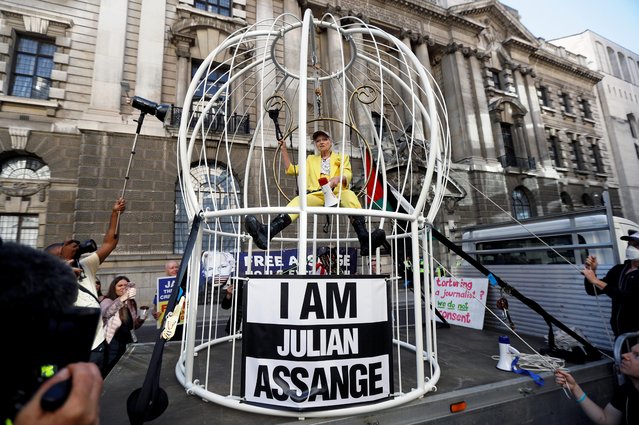 Vivienne Westwood demonstrates outside the Old Bailey in support of Julian Assange, in London, Britain, July 21, 2020. (Photo by Peter Nicholls/Reuters) 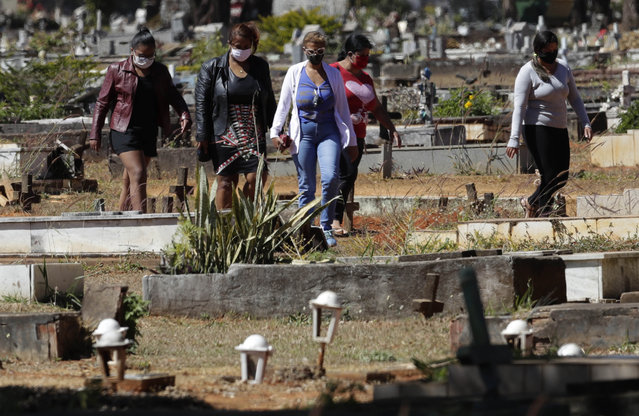 People arrive for the burial of Jose Mario de Souza Veiga, 83, whose family members said died of COVID-19, at the Campo da Esperanca cemetery on the border of the neighborhoods of Taguatinga and Ceilandia, in Brasilia, Brazil, Tuesday, July 21, 2020. (Photo by Eraldo Peres/AP Photo) 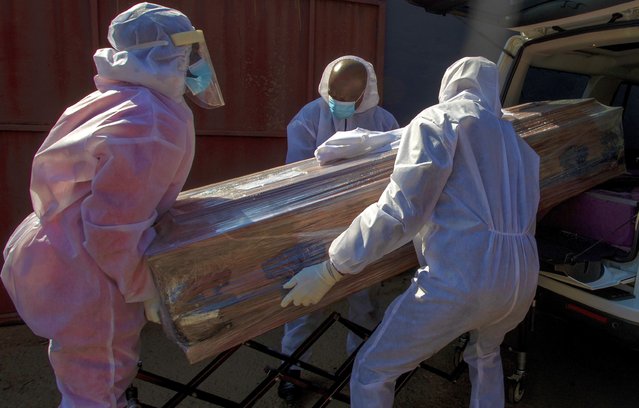 Funeral home workers in protective suits carry the coffin of a woman who died from COVID-19 into a hearse in Katlehong, near Johannesburg, South Africa, Tuesday, July 21, 2020. South Africa, last Saturday became one of the top five worst-hit countries in the coronavirus pandemic, as breathtaking new infection numbers around the world were a reminder that a return to normal life is still far from sight. (Photo by Themba Hadebe/AP Photo) 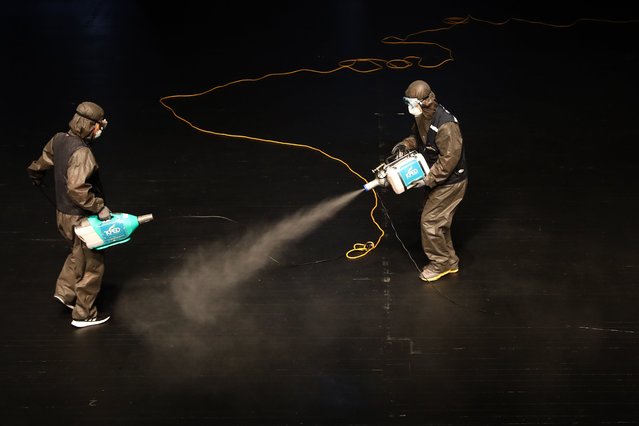 Disinfection workers wearing protective clothing spray anti-septic solution in an Sejong Culture Center, M-Theatre amid concerns over the spread of coronavirus on July 21, 2020 in Seoul, South Korea. With the number of daily local cases recently hovering around 20 or below, but imported cases continued to rise by double digit figures. South Korea resumed operations of some museums and libraries in the greater Seoul area starting yeaterday. Health authorities, however, are still vigilant over the spread of the virus in vacation spots over the summer, pointing out that the season will serve as a critical juncture for the nation's anti-virus fight. The country added 45 cases toddy, including 20 local infections, raising the total caseload to 13,816, according to the Korea Centers for Disease Control and Prevention (KCDC). (Photo by Chung Sung-Jun/Getty Images) 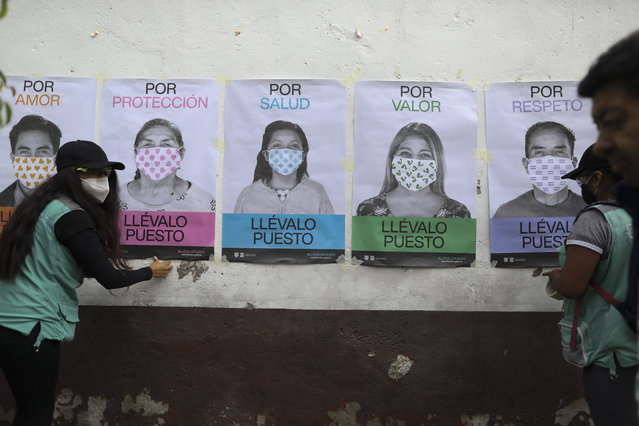 A man not wearing a face mask walks by as city health department workers affix a series of posters advocating mask use to a wall, in San Mateo Xalpa in the Xochimilco district of Mexico City, Tuesday, July 21, 2020. The posters say, in Spanish, “For love, for protection, for health, for self-worth, for respect, wear it”. To help battle the pandemic in hard-hit areas, the city health department has set up mobile testing units and sent teams of workers to hang posters and distribute informational pamphlets about how to prevent tCOVID-19. (Photo by Rebecca Blackwell/AP Photo) 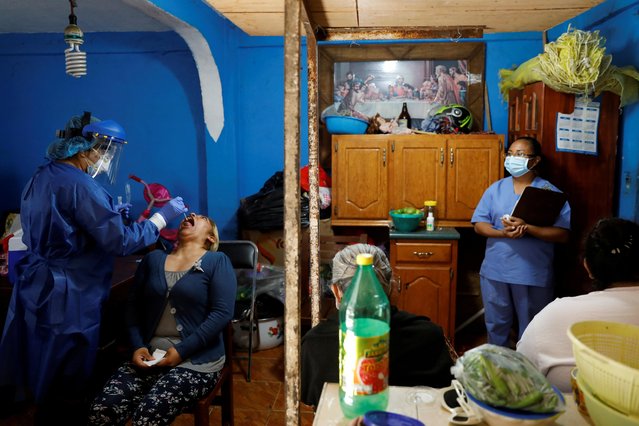 A healthcare worker wearing personal protective equipment (PPE) conducts a test to a patient while going house to house to test people for the coronavirus disease (COVID-19) in the municipality of Tlahuac, one of the highly contagious zone of Mexico City, as the coronavirus disease (COVID-19) outbreak continues in Mexico on July 20, 2020. (Photo by Carlos Jasso/Reuters) 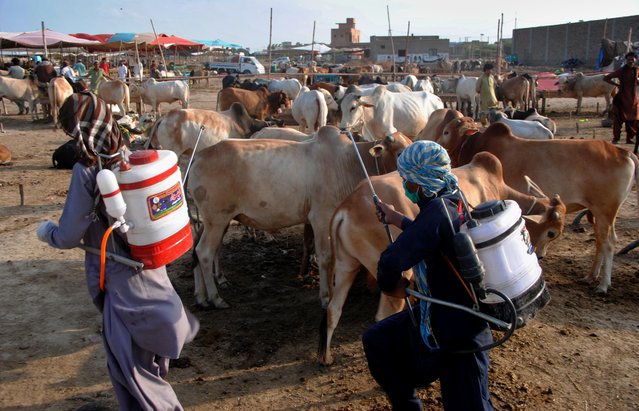 Health workers wearing face masks spray disinfectant liquid on sacrificial animals amid concerns over the spread of the SARS-CoV-2 coronavirus that causes the pandemic COVID-19 disease ahead of the Muslim festival of Eid al-Adha at an animal market in Hyderabad, southern Pakistan, 21 July 2020. Eid al-Adha, also known as the Festival of the Sacrifice, is the second and holiest of the two main Islamic holidays celebrated each year (the other one being Eid al-Fitr). Every year, on the 10th day of the Islamic lunar month of Dhu al-Hijjah, Muslims around the world ritually slaughter a sacrificial animal and split the meat into three parts: one is reserved for the family, another for friends and relatives, and the third is given to the poor and needy. The Saudi Supreme Court has declared that the first day of Eid al-Adha this year falls on 31 July. (Photo by Nadeem Khawar/EPA/EFE) 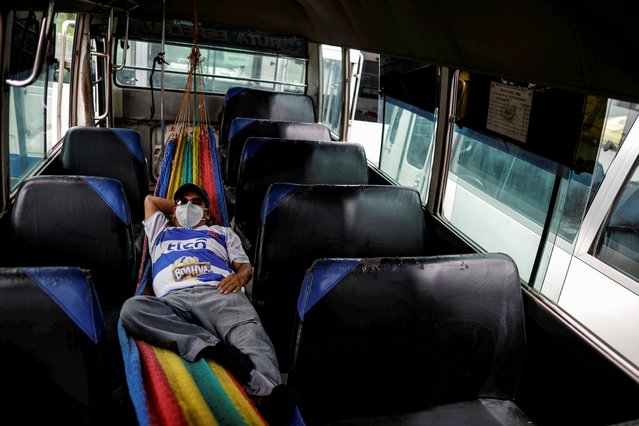 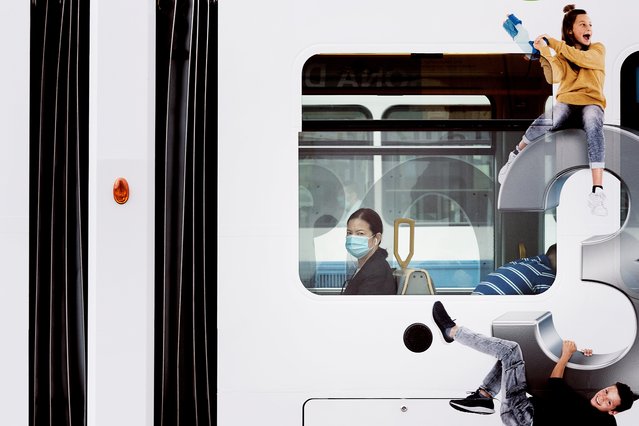 A woman is sitting in a tram in Zurich on July 21, 2020. A protective mask is also required on public transport throughout Switzerland. (Photo by Annick Ramp/NZZ) 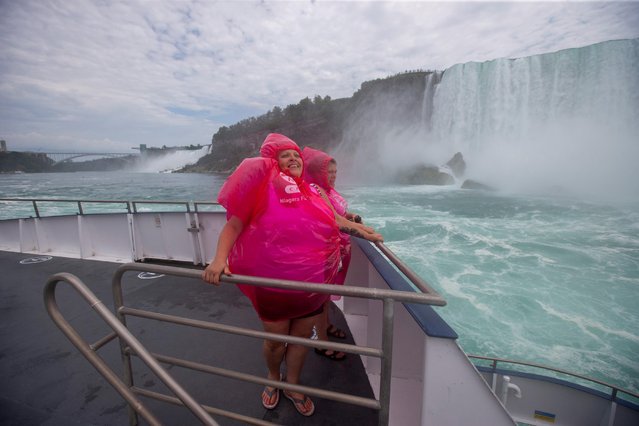 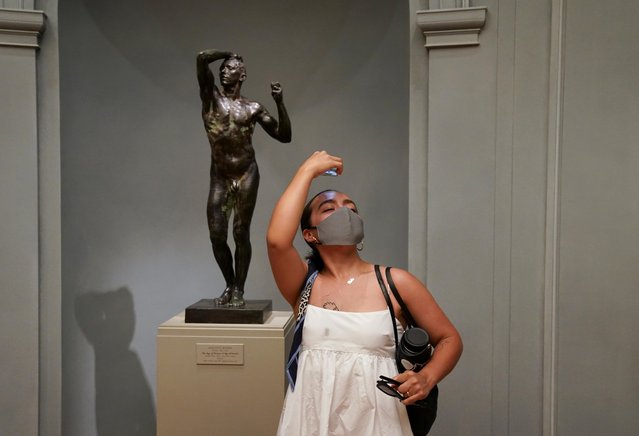 Mariana Martinez of Arlington, Virginia, imitates a statue while making a birthday visit to the West Building of the National Gallery of Art, which reopened after months of closure due to the outbreak, in Washington, July 20, 2020. (Photo by Kevin Lamarque/Reuters) 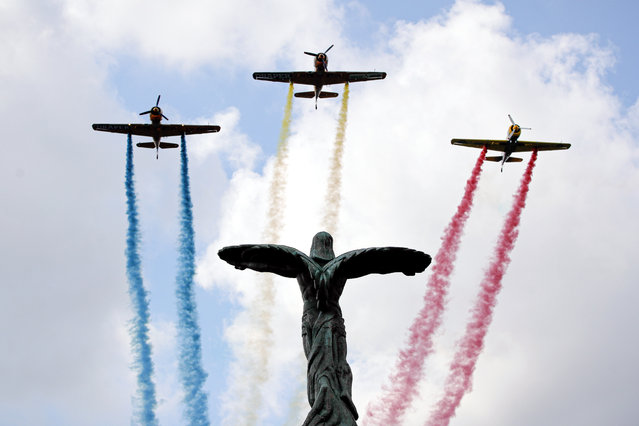 Planes fly above the Aviation Heroes' monument in Bucharest, Romania, Monday, July 20, 2020. A ceremony took place to mark Aviation Day next to the monument that celebrates aviators, both military and civilian, who lost their lives in the line of duty or contributed to the evolution of Romanian aviation. (Photo by Vadim Ghirda/AP Photo)
Edit Del
23 Jul 2020 00:07:00, post received 0 comments
Publication archive:
←   →
Popular tags:
All tags
Last searches: