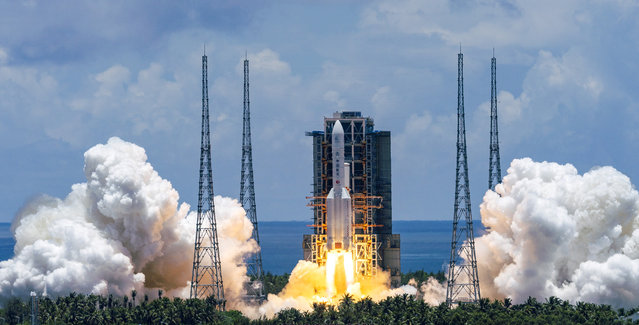 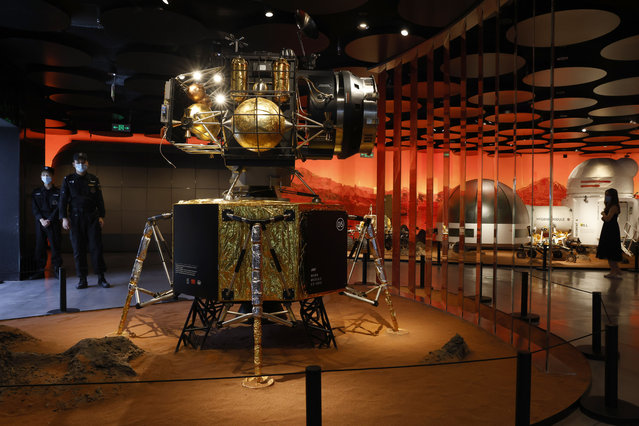 Security guards stand near a model of a landing capsule for Mars at an exhibition in Beijing Thursday, July 23, 2020. China launched its most ambitious Mars mission yet on Thursday in a bold attempt to join the United States in successfully landing a spacecraft on the red planet. The Tianwen-1 was launched on a Long March-5 carrier rocket from a launch site on Hainan Island. (Photo by Ng Han Guan/AP Photo) 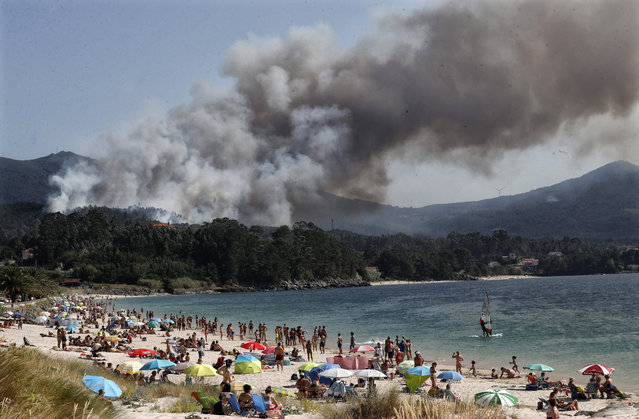 Smoke rises from the forest fire originated next to a touristic beach in Porto de Son, A Coruna, northern Spain, 21 July 2020. (Photo by Lavandeira Jr./EPA/EFE) 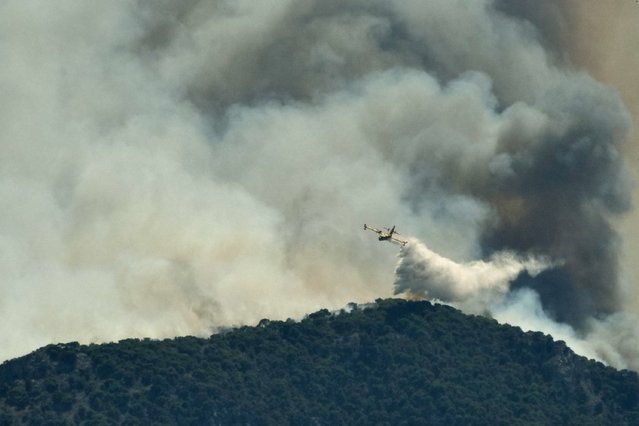 A firefighting plane makes a water drop as a wildfire burns near the village of Kechries, Greece, July 22, 2020. (Photo by Vassilis Triandafyllou/Reuters) 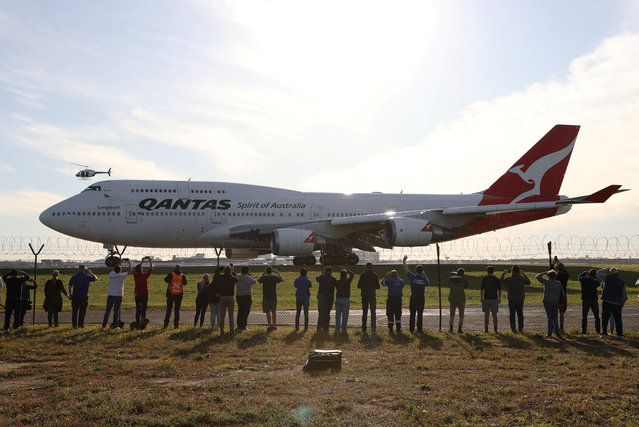 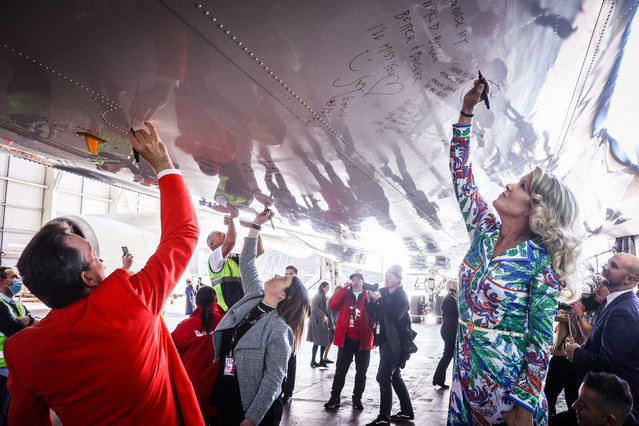 Qantas cabin crew and ground staff sign the underneath of the fuselage of the Boeing 747-400, registration VH-OEJ before it takes off at Sydney Airport for the last time as it retires from service on July 22, 2020 in Sydney, Australia. Flight QF7474 took off in the early afternoon to begin the fleet's early retirement from Qantas' services, which was originally scheduled in six months' time but was changed due to the devastating effects of COVID-19 on global travel. Thousands of spectators lined the airport perimeter to watch the “Queen of the Skies” take off for retirement as she left for Los Angeles. (Photo by David Gray/Getty Images) 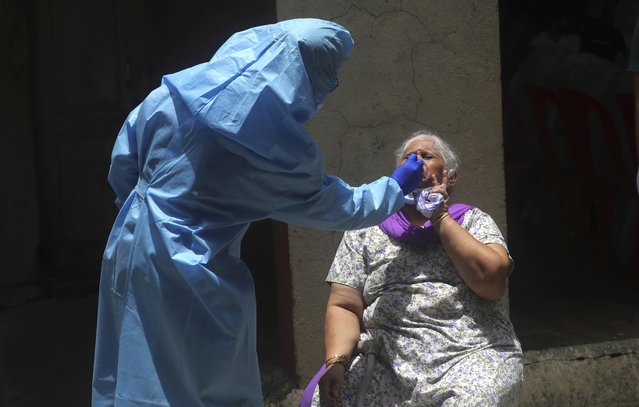 A health worker takes a swab test of a women at a residential building in Mumbai, India, Wednesday, July 22, 2020. With a surge in coronavirus cases in the past few weeks, state governments in India have been ordering focused lockdowns in high-risk areas to slow down the spread of infections. (Photo by Rafiq Maqbool/AP Photo) 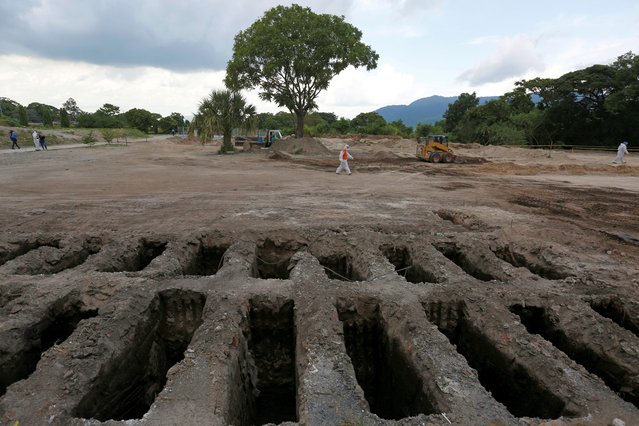 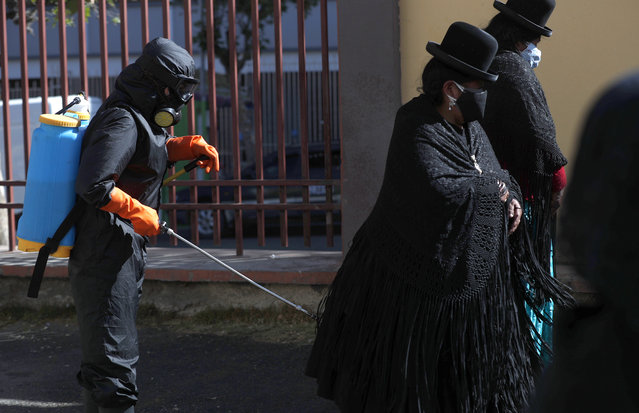 A funeral home worker wearing full protective gear as a precaution against the spread of the new coronavirus sprays disinfectant over the relatives the late Guillermo Carpio, outside the General Hospital in La Paz, Bolivia, Wednesday, July 22, 2020. Herminia Carpio said her 58-year-old brother died the previous afternoon, and according to the hospital he died from COVID-19 complications. (Photo by Juan Karita/AP Photo) 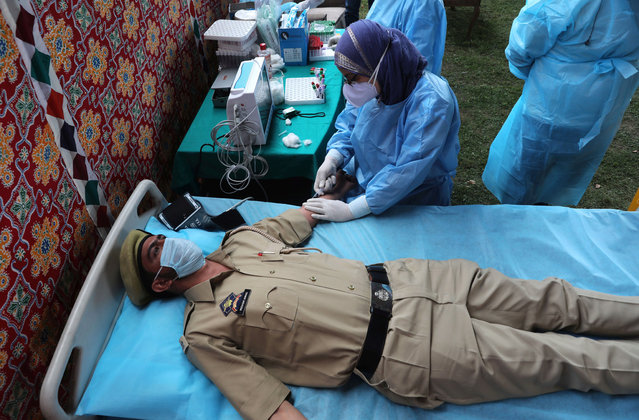 A health worker collects blood samples from a patient recently recovered from COVID-19 in Srinagar, India, 22 July 2020. Health workers set up a screening camp for people who have recovered and are willing to donate plasma. (Photo by Farooq Khan/EPA/EFE) 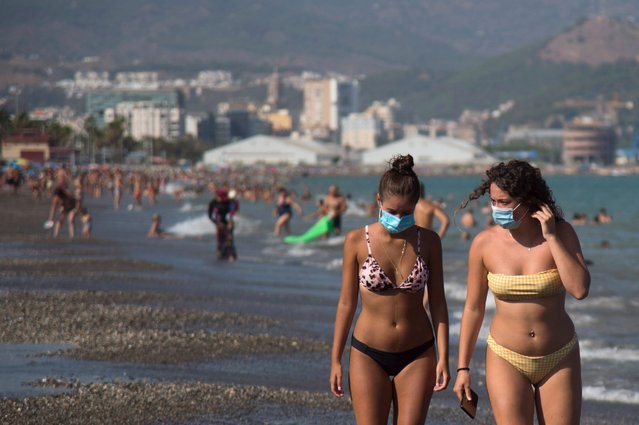 Women wearing face masks walk along La Misericordia Beach in Malaga on July 22, 2020. The world's second-most popular destination after France, Spain was badly hit by the coronavirus that has claimed more than 28,400 lives and dealt a major blow to its tourism industry, which accounts for 12 percent of GDP. (Photo by Jorge Guerrero/AFP Photo) 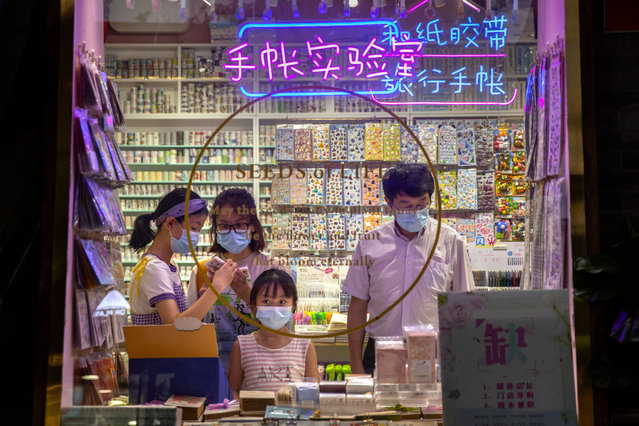 People wearing face masks to protect themselves against the coronavirus shop in a store along a pedestrian shopping street in Beijing, Wednesday, July 22, 2020. Numbers of cases in China's latest virus outbreak continued to fall Wednesday, with several new cases in the northwestern region of Xinjiang. (Photo by Mark Schiefelbein/AP Photo) 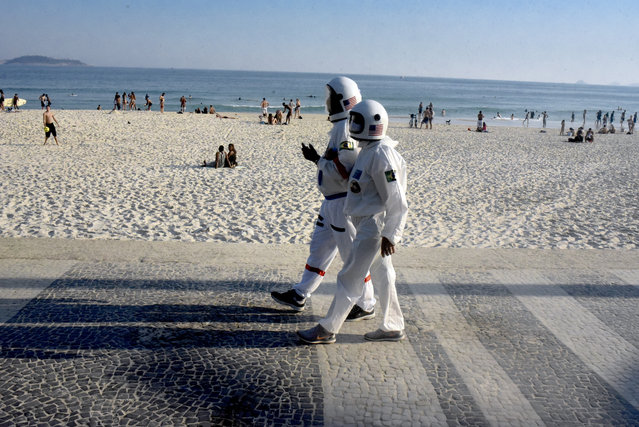 People dressed as astronauts are seen amid coronavirus (Covid-19) pandemic along Ipanema beach in the south zone of Rio de Janeiro, Brazil on July 21, 2020. The outfit even has the NASA symbol and was created for trips around the city and the beach. Elderly with a chronic lung problem, retired accountant Tercio Galdino Lima, 66, decided to make the overalls and helmet for himself and his wife Alicea Lima, 65, to be able to walk more safely on the streets of Rio and reduce the risk of contagion by the coronavirus. Brazil has an average of 1,048 deaths per day from coronavirus in the last week. (Photo by Fabio Teixeira/Anadolu Agency via Getty Images) 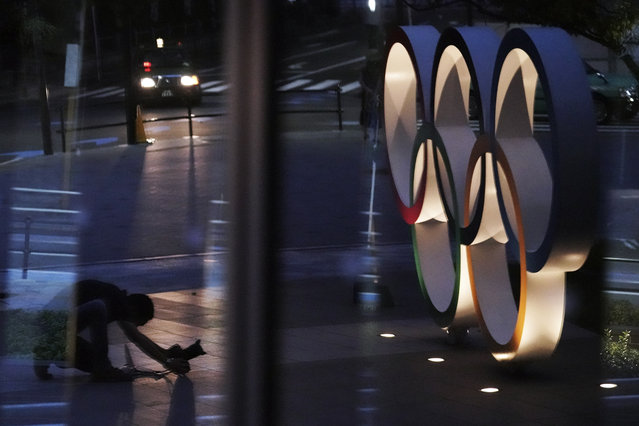 A photographer adjusting a camera to shoot the Olympic rings is reflected on a glass window near the New National Stadium Wednesday, July 22, 2020, in Tokyo. The postponed Tokyo Olympics have again reached the one-year-to-go mark. But the celebration is small this time with more questions than answers about how the Olympics can happen in the middle of a pandemic. That was before COVID-19 postponed the Olympics and pushed back the opening to July 23, 2021. (Photo by Eugene Hoshiko/AP Photo) 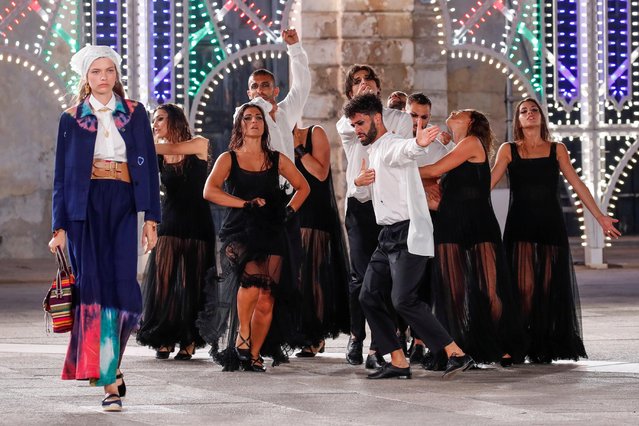 A model presents a creation from Dior's Cruise 2021 collection during a live-streamed runway show without an audience due to the coronavirus disease (COVID-19) outbreak, at the Piazza del Duomo, in Lecce, Italy on July 22, 2020. Christian Dior hosted a live but audience-free fashion show in the Italian city of Lecce, in a dazzling celebration of local crafts and traditions that included a dance spectacle in the middle of the baroque main square. (Photo by Alessandro Garofalo/Reuters)
Edit Del
24 Jul 2020 00:07:00, post received 0 comments
Publication archive:
←   →
Popular tags:
All tags
Last searches: