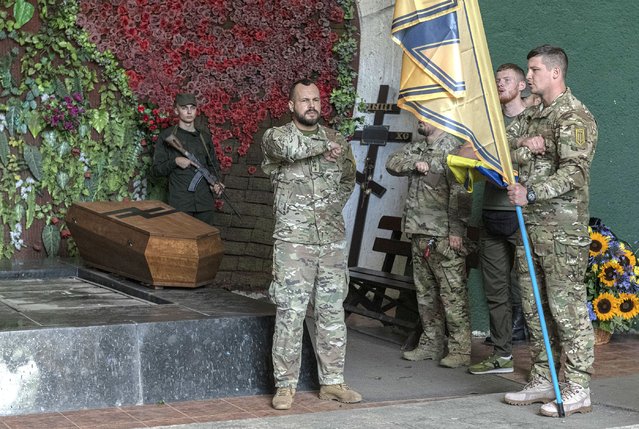 Solders of the Azov regiment pay their last tribute to a serviceman killed in a battle against Russian troops in a city crematorium in Kyiv, Ukraine, Thursday, July 21, 2022. (Photo by Andrew Kravchenko/AP Photo) 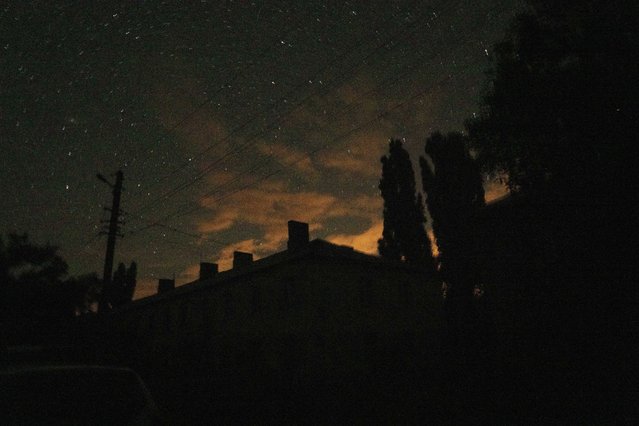 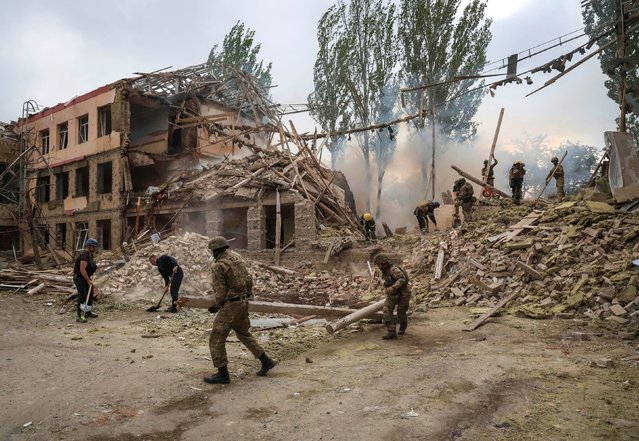 Rescuers and servicemen work at a school building damaged by a Russian military strike, amid Russia's invasion on Ukraine, in Kramatorsk, in Donetsk region, Ukraine on July 21, 2022. (Photo by Gleb Garanich/Reuters) 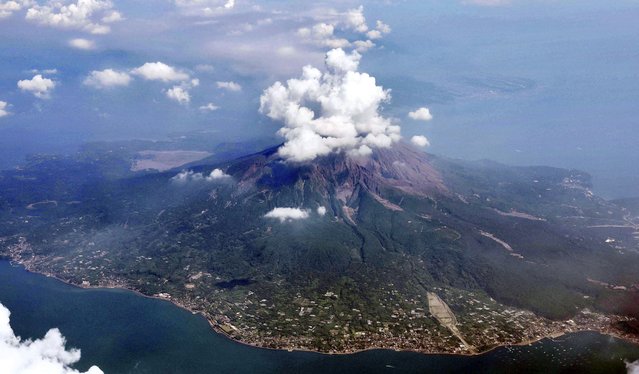 This aerial photo shows Sakurajima volcano in Kagoshima, southern island of Kyushu, Japan, one day after its eruption, Monday, July 25, 2022. The volcano spewed ash and large rocks into the nighttime sky on Sunday. (Photo by Kyodo News via AP Photo) 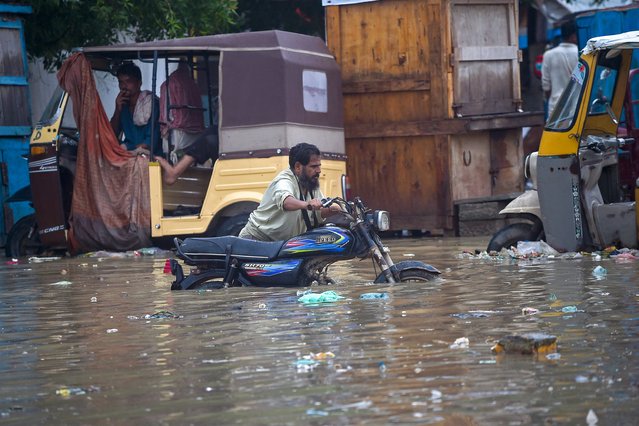 A man pushes his motorbike through a flooded street after heavy monsoon rainfall in Karachi on July 25, 2022. (Photo by Rizwan Tabassum/AFP Photo) 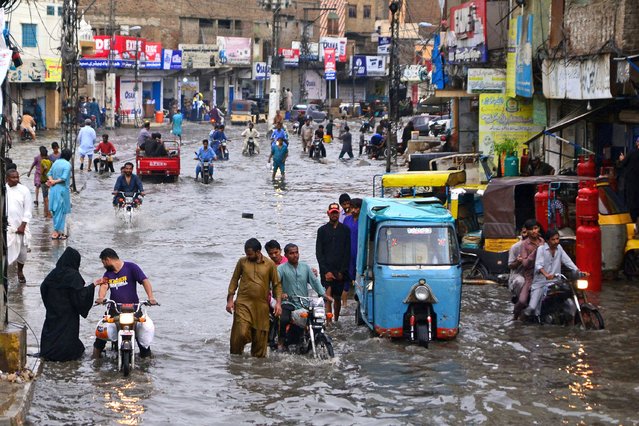 Commuters make their way through a flooded street during monsoon rainfall in Hyderabad, Pakistan on July 24, 2022. (Photo by Akram Shahid/AFP Photo) 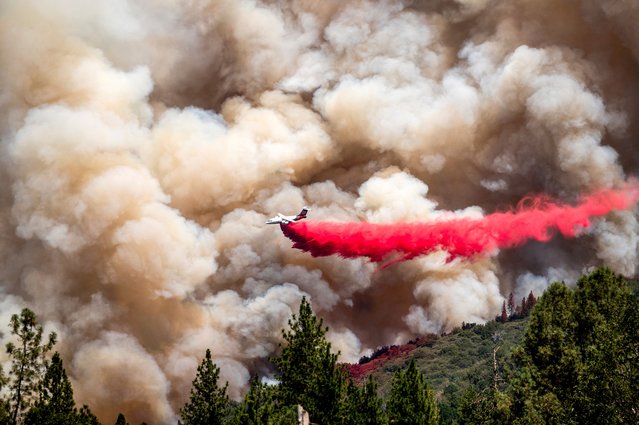 An air tanker drops retardant while trying to stop the Oak Fire from progressing in Mariposa County, Calif., on Sunday, July 24, 2022. (Photo by Noah Berger/AP Photo) 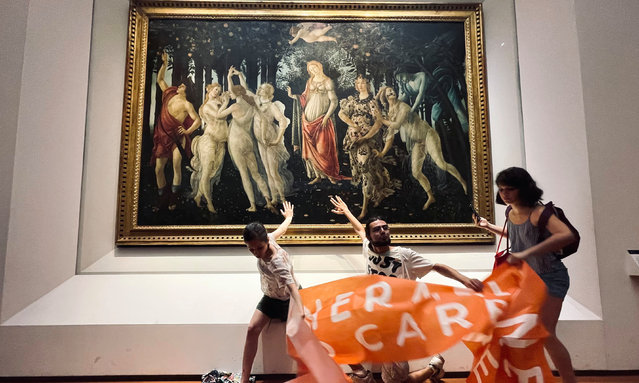 Protestors from the action group Ultima Generazione glue their hands to the glass covering Sandro Botticelli's La Primavera at Uffizi on July 22, 2022 in Florence, Italy. Ultima Generazione (Last Generation) are so named as they believe they are the last generation who can act to reverse the effects of cimate change. (Photo by Laura Lezza/Getty Images) 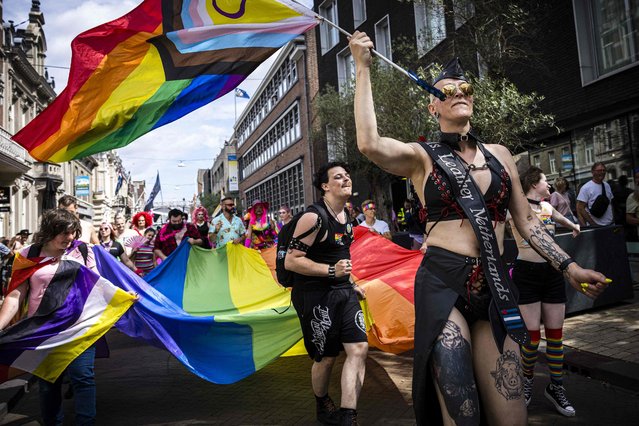 Colorfully dressed visitors in the center during Pink Monday at the annual fair in Tilburg, Dutch province North Brabant on July 25, 2022. (Photo by Rob Engelaar/AFP Photo) 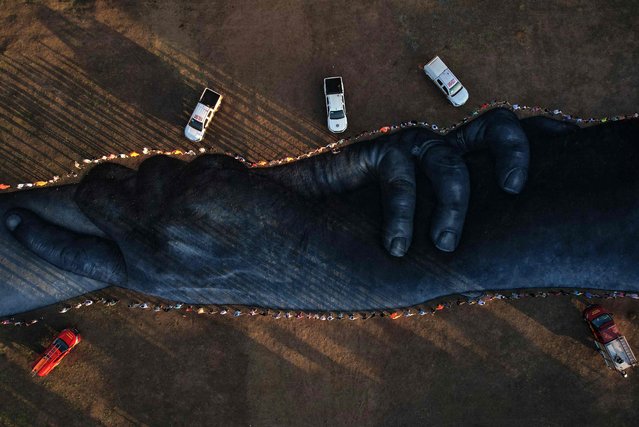 Aerial view of families and friends of the victims of the the collapse of the Corrego do Feijao dam of mining company Vale, giving a simbolic hug to the French artist Saype's work of art that pay tribute to the victims at Corrego do Feijao football field in Brumadinho, state of Minas Gerais, Brazil on July 24, 2022. (Photo by Douglas Magno/AFP Photo) 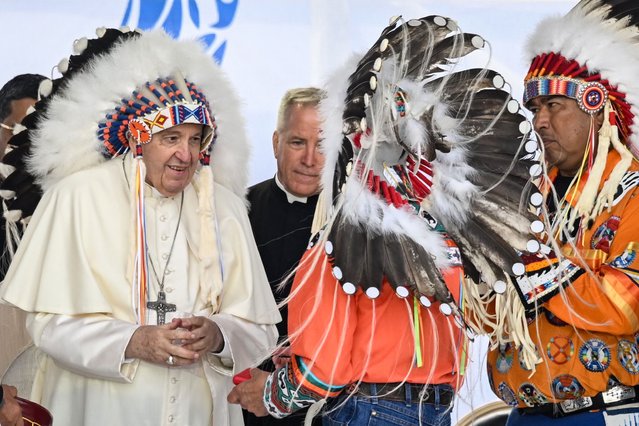 Pope Francis wears a headdress presented to him by Indigenous leaders during a meeting at Muskwa Park in Maskwacis, Alberta, Canada, on July 25, 2022. Pope Francis will make a historic personal apology Monday to Indigenous survivors of child abuse committed over decades at Catholic-run institutions in Canada, at the start of a week-long visit he has described as a “penitential journey”. (Photo by Patrick T. Fallon/AFP Photo) 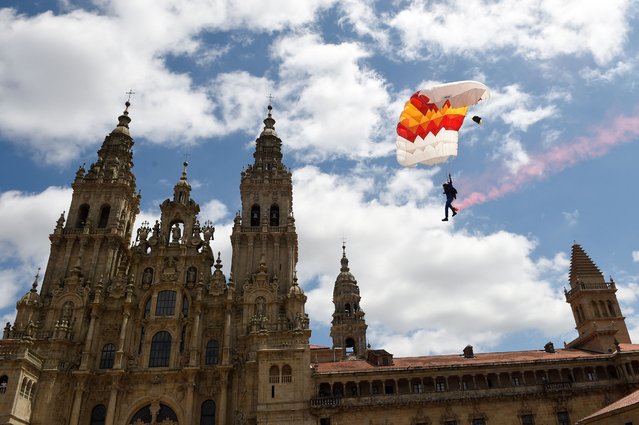 A parachutist flies over Obradoiro Square during the “National Offering to the Apostle Santiago” at the Cathedral of Santiago de Compostela, on July 25, 2022. (Photo by Miguel Riopa/AFP Photo) 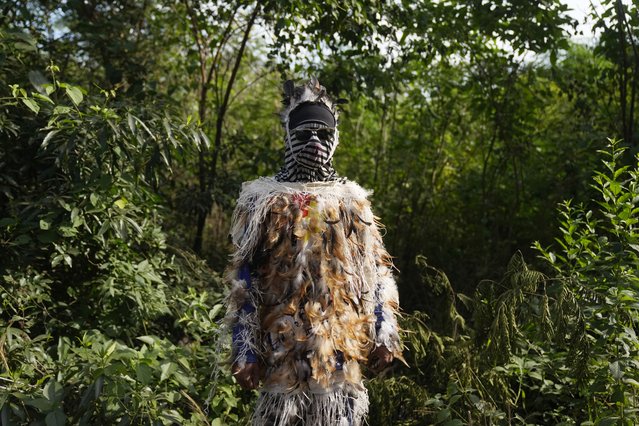 Ulises Aguero poses for a photo dressed in feathers to honor Saint Francisco Solano, known as “the Saint of the birds” in Emboscada, Paraguay, Sunday, July 24, 2022. (Photo by Jorge Saenz/AP Photo) 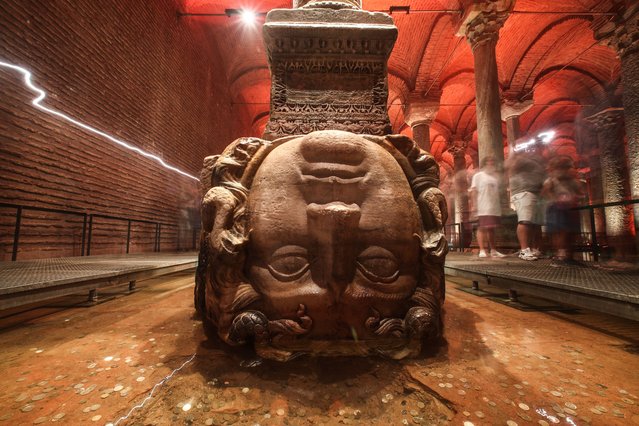 People walk behind the Medusa head in the Basilica Cistern in Istanbul, Turkey, 24 July 2022. The site has been restored by the Istanbul Metropolitan Municipality and is now open for visitors again. The Byzantine structure was commissioned by Emperor Justinian and built in 532. The underground Basilica, also called Underground Cistern, is the largest well preserved cistern in Istanbul, which rests on a total of 336 columns. According to historical texts, more than 7,000 slaves were involved in the construction of the cistern. (Photo by Sedat Suna/EPA/EFE) 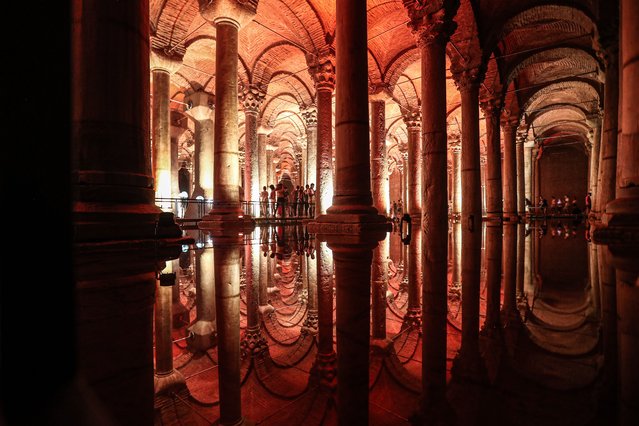 People are reflected in the waters of the Basilica Cistern while visiting the historic site in Istanbul, Turkey, 24 July 2022. (Photo by Sedat Suna/EPA/EFE) 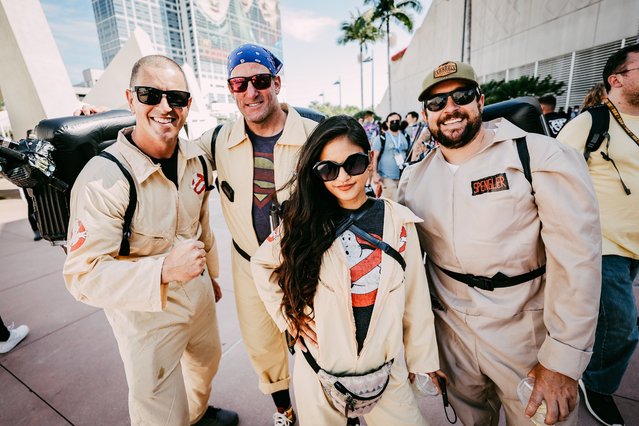 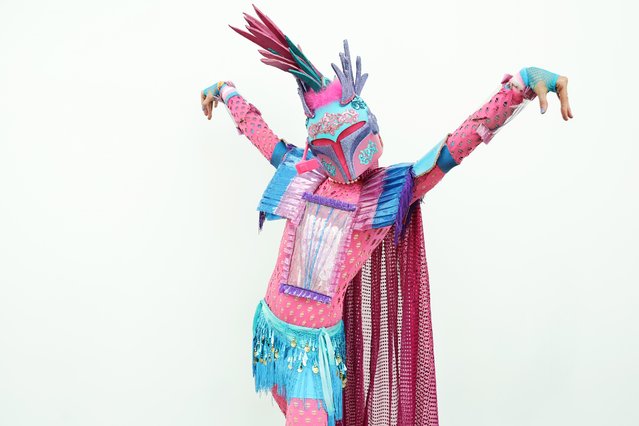 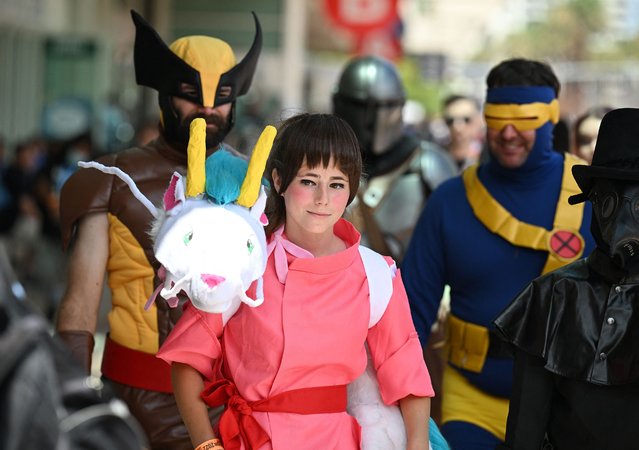 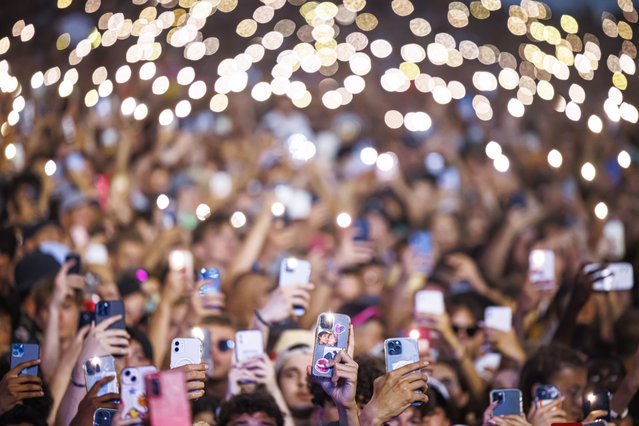 Festival goers cheer as French rapper Ninho performs on the main stage during the 45th edition of the Paleo Festival, in Nyon, Switzerland, 23 July 2022. The Paleo is the largest open-air music festival in the western part of Switzerland and runs from 19 to 24 July. (Photo by Valentin Flauraud/EPA/EFE) 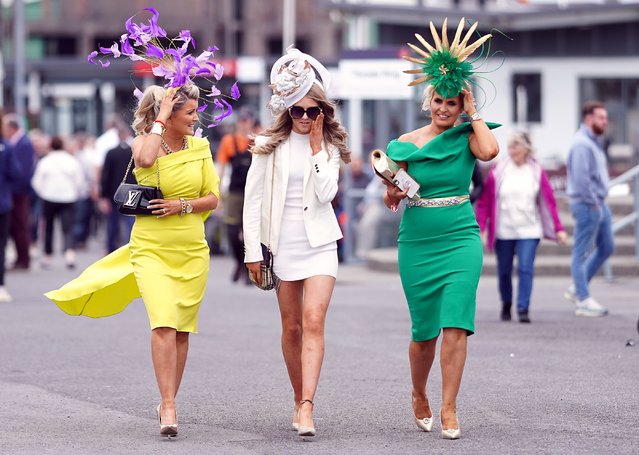 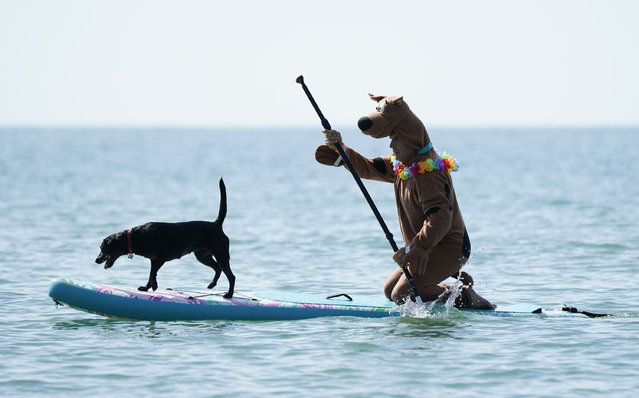 A competitor and their dog practice before the Dog Masters 2022 UK Dog Surfing Championships at Branksome Dene Chine beach in Poole, Dorset on Saturday, July 23, 2022. (Photo by Andrew Matthews/PA Images via Getty Images) 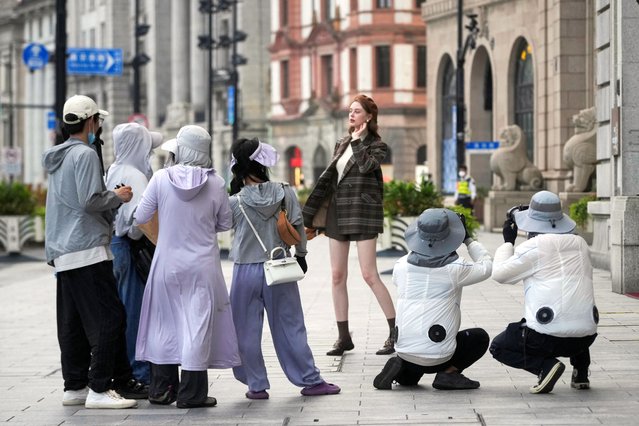 Photographers wear clothing with cooling fans and staff members wear cloths that protects them from the sun as they prepare for fashion photo session on a street, amid a heatwave warning in Shanghai, China on July 25, 2022. (Photo by Aly Song/Reuters)
Edit Del
26 Jul 2022 05:45:00, post received 0 comments
Publication archive:
←   →
Popular tags:
All tags
Last searches: