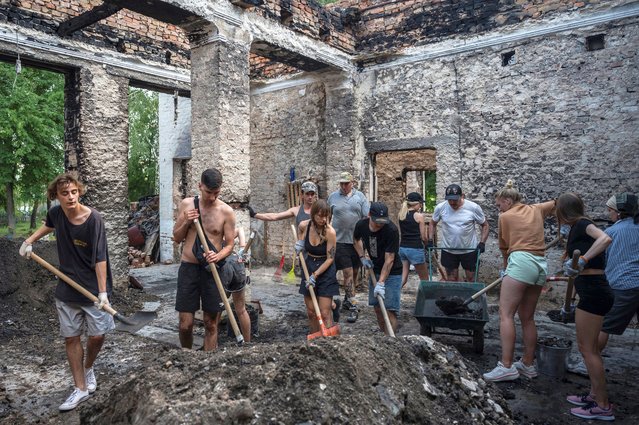 Volunteers clean up the House of a Culture in the village of Yahidne, which was heavily damaged during Russia's attack on Ukraine, in Chernihiv region, Ukraine on July 23, 2022. Members of the volunteers' movement Repair Together travel over regions, which were under Russian occupation and help local residents to clean up damaged buildings under accompaniment of electronic music. (Photo by Viacheslav Ratynskyi/Reuters) 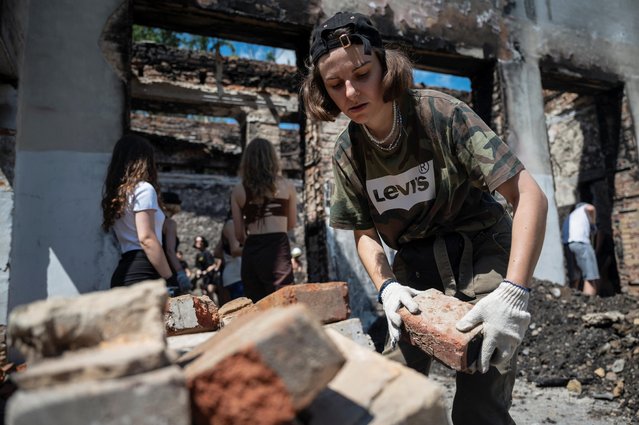 Volunteers remove debris from the House of a Culture in the village of Yahidne, which was heavily damaged during Russia's attack on Ukraine, in Chernihiv region, Ukraine on July 23, 2022. (Photo by Viacheslav Ratynskyi/Reuters) 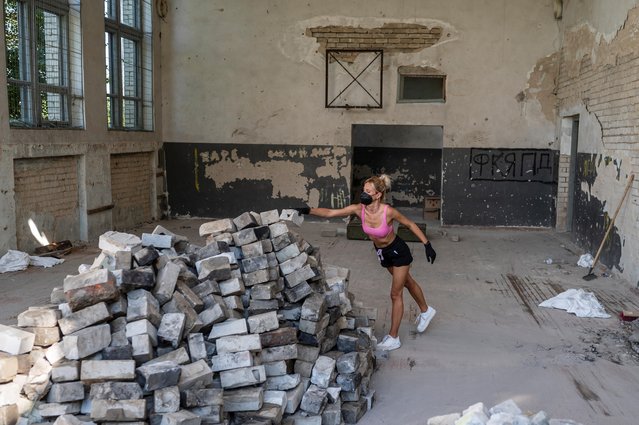 A volunteer cleans up the House of a Culture in the village of Yahidne, which was heavily damaged during Russia's attack on Ukraine, in Chernihiv region, Ukraine on July 23, 2022. (Photo by Viacheslav Ratynskyi/Reuters)

An artist performs while volunteers remove debris from the House of a Culture in the village of Yahidne, which was heavily damaged during Russia's attack on Ukraine, in Chernihiv region, Ukraine on July 23, 2022. (Photo by Viacheslav Ratynskyi/Reuters) 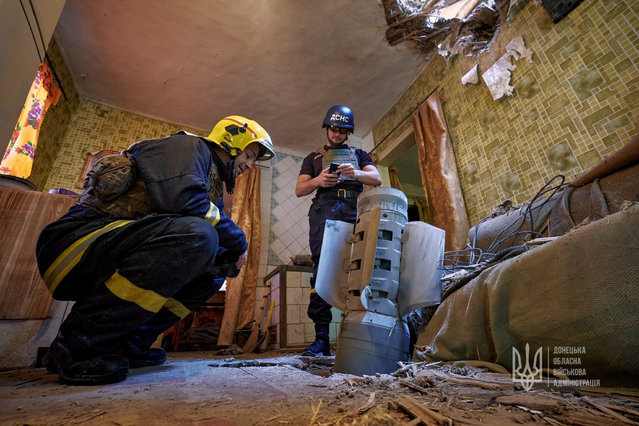 Ukraine's State Emergency Service members inspect an unexploded shell from a Smerch multiple launch rocket system inside a residential apartment, as Russia's attack on Ukraine continues, in Kramatorsk, Ukraine on July 25, 2022. (Photo by Press service of the Donetsk Regional Military Administration/Handout via Reuters) 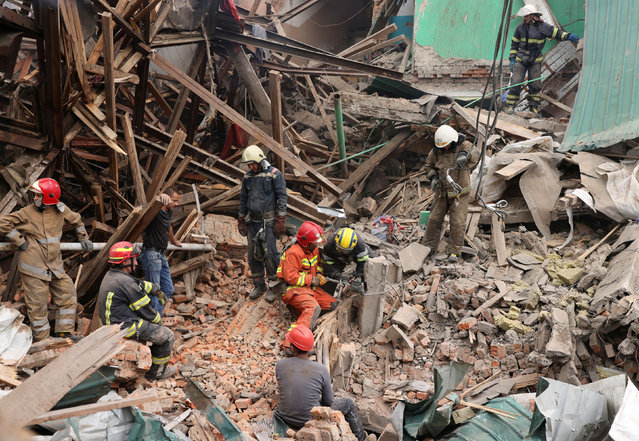 Firefighters remove debris to find bodies of people at the Central House of Culture, after a military strike hit a building, as Russia's invasion of Ukraine continues, in Chuhuiv, in Kharkiv region Ukraine on July 25, 2022. (Photo by Nacho Doce/Reuters) 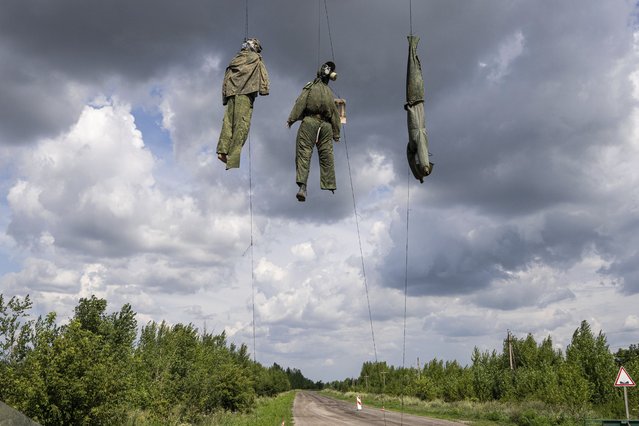 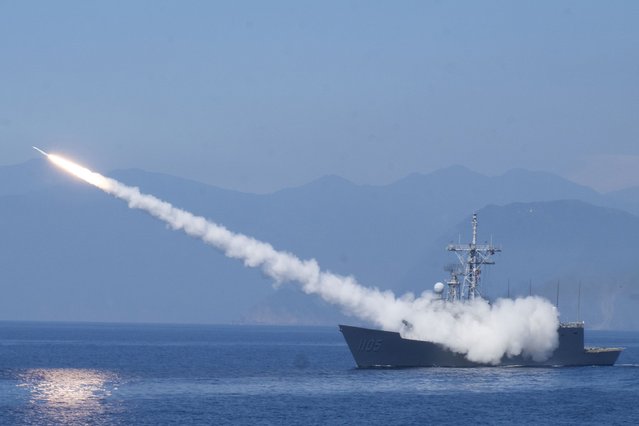 A Cheng Kung class frigate fires an anti air missile as part of a navy demonstration in Taiwan's annual Han Kuang exercises off the island's eastern coast near the city of Yilan, Taiwan on Tuesday, July 26, 2022. The Taiwanese capital Taipei staged a civil defense drill Monday and President Tsai Ing-wen on Tuesday attended the annual Han Kuang military exercises, although there was no direct connection with tensions over a possible visit by U.S. House Speaker Nancy Pelosi. (Photo by Huizhong Wu/AP Photo) 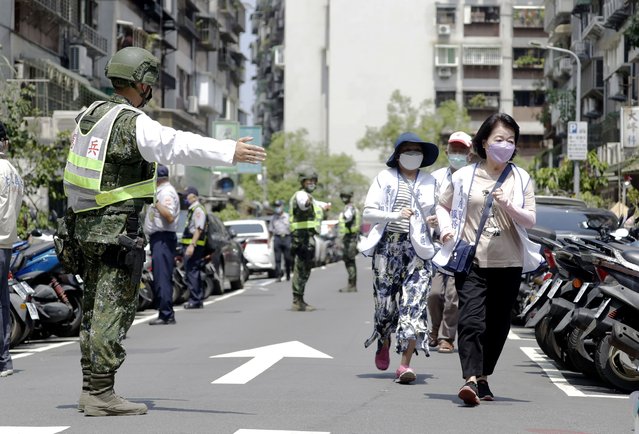 People are guided by Taiwan's soldiers to a basement shelter during the Wanan air raid drill in Taipei, Taiwan, Monday, July 25, 2022. Taiwan’s capital staged air raid drills Monday and its military mobilized for routine defense exercises, coinciding with concerns over a forceful Chinese response to a possible visit to the island by U.S. Speaker of the House Nancy Pelosi. (Photo by Chiang Ying-ying/AP Photo) 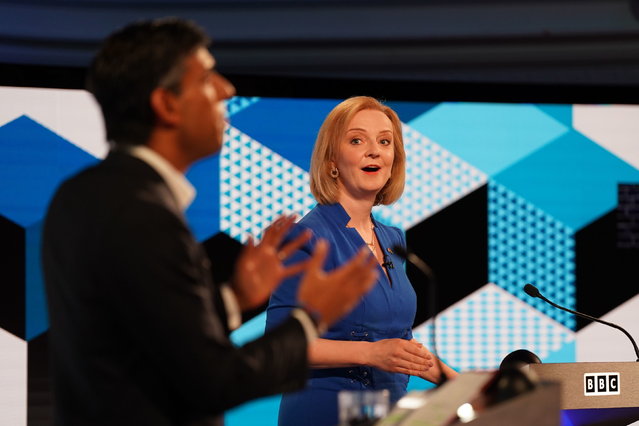 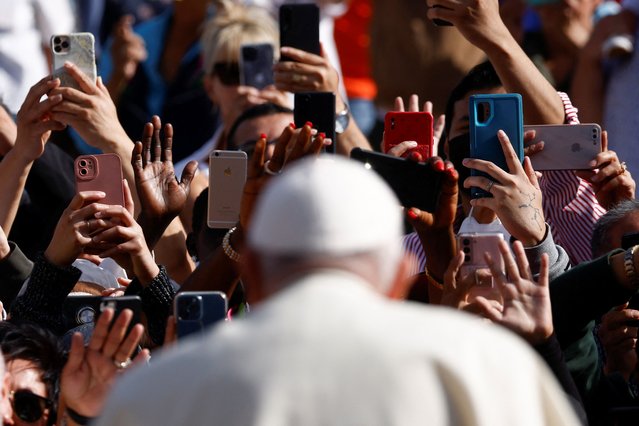 People watch as Pope Francis arrives to preside a mass at Commonwealth Stadium in Edmonton, Alberta, Canada on July 26, 2022. (Photo by Guglielmo Mangiapane/Reuters) 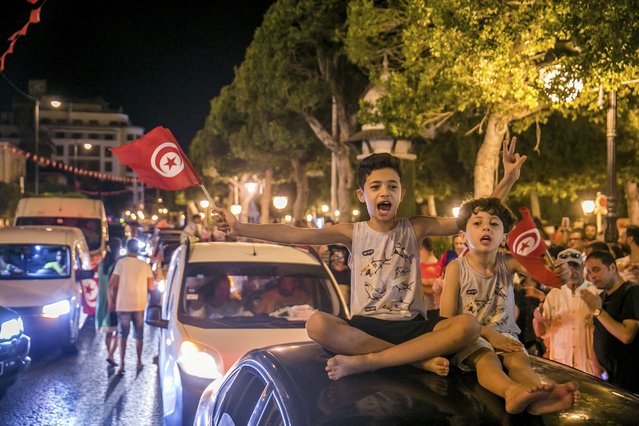 Tunisians celebrate the exit polls indicating a vote in favor of the new Constitution, in Tunis, late Monday, July 25, 2022. Hundreds of supporters of Tunisian President Kais Saied took to the streets to celebrate after the end of voting on a controversial new constitution that critics say could reverse hard-won democratic gains and entrench a presidential power grab. (Photo by Riadh Dridi/AP Photo) 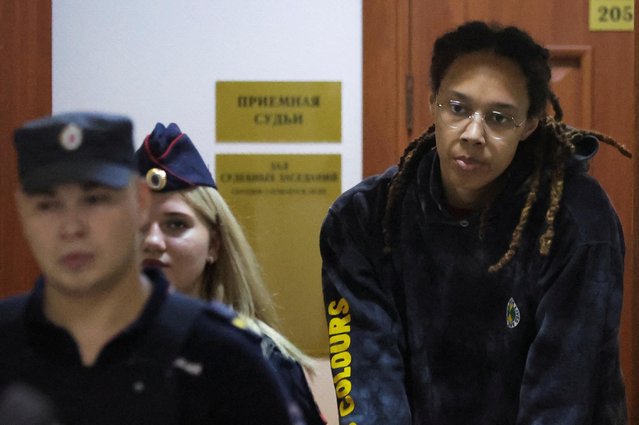 U.S. basketball player Brittney Griner, who was detained at Moscow's Sheremetyevo airport and later charged with illegal possession of cannabis, is escorted before a court hearing in Khimki outside Moscow, Russia on July 26, 2022. (Photo by Evgenia Novozhenina/Pool via Reuters) 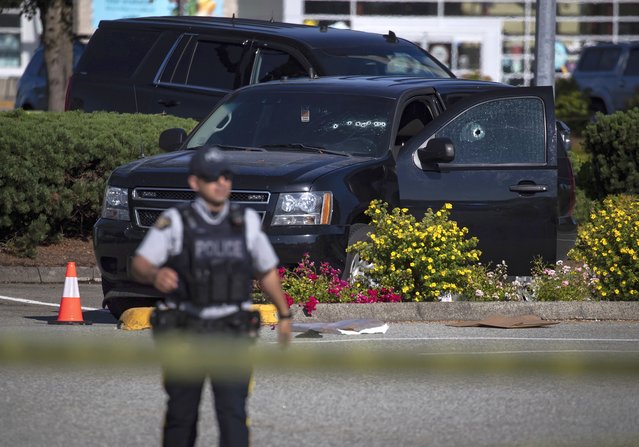 A police officer standing near a windshield and passenger window of an RCMP vehicle with bullet holes at the scene of a shooting in Langley, British Columbia, Monday, July 25, 2022. Canadian police reported multiple shootings of homeless people Monday in a Vancouver suburb and said a suspect was in custody. (Photo by Darryl Dyck/The Canadian Press via AP Photo) 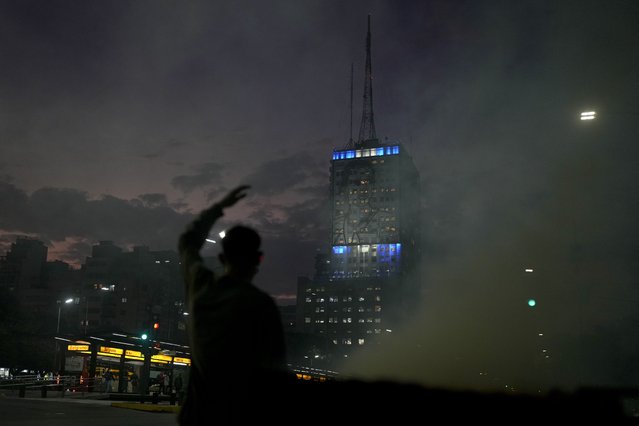 A man cooks sausages near the Ministry of Social Development building that has an image of Argentina's late former first lady Maria Eva Duarte de Peron, better known as “Evita” in Buenos Aires, Argentina, Tuesday, July 26, 2022. Argentines commemorate the 70th anniversary of the death of their most famous first lady Evita who died of cancer on July 26, 1952, at the age of 33. (Photo by Natacha Pisarenko/AP Photo) 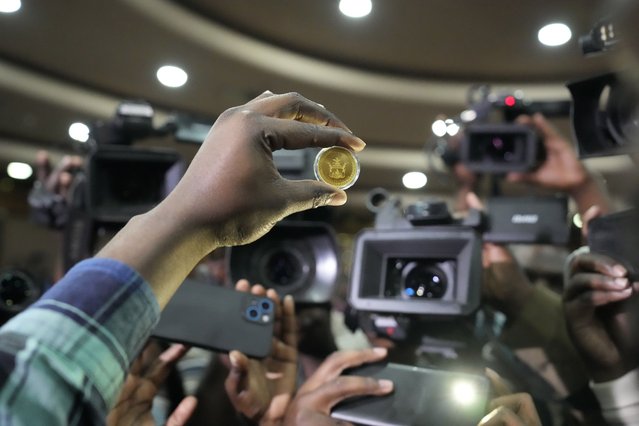 A reserve bank of Zimbabwe offical holds a sample of a gold coin at the launch in Harare, Monday, July, 25, 2022. Zimbabwe has launched gold coins to be sold to the public in a bid to to tame runaway inflation that has further eroded the country's unstable currency. (Photo by Tsvangirayi Mukwazhi/AP Photo) 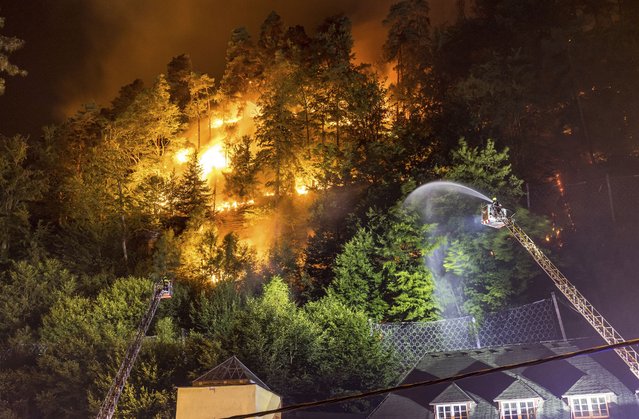 Firefighters throw water on fire in the Ceske Svycarsko (Czech Switzerland) National Park, above the village Hrensko, Czech Republic, Monday July 25, 2022. The fire broke out on Sunday and started spreading on Monday as the wind rose. (Photo by Hajek Vojtech/CTK via AP Photo) 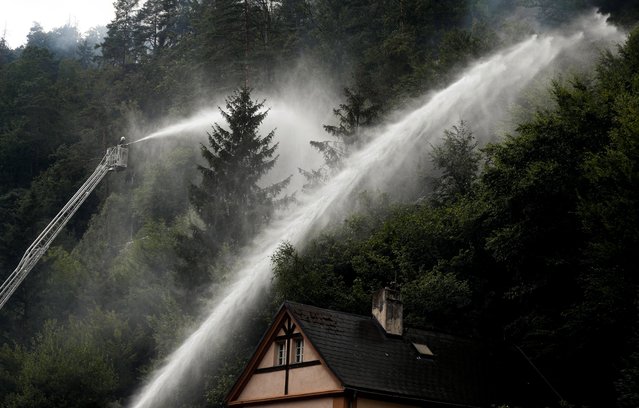 Firefighters work to contain a wildfire as it continues to burn near the town of Hrensko, Czech Republic, July 26, 2022. (Photo by David W. Cerny/Reuters) 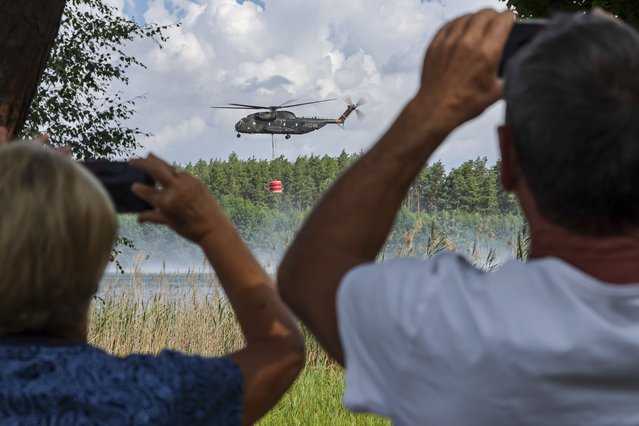 A Bell CH-53 German Bundeswehr army firefighter helicopter loads water from a sea in Falkenberg, Germany, Tuesday, July 26, 2022. Firefighters in Brandenburg continue to fight a large forest fire in the Elbe-Elster district. Since yesterday, it has been burning on an area of 800 hectares. First residents had to leave their homes. (Photo by Jan Woitas/dpa via AP Photo) 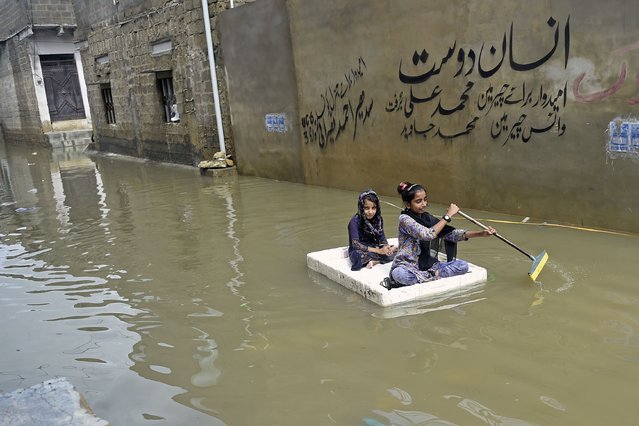 Girls use a temporary raft across a flooded street in a residential area after heavy monsoon rains in Karachi on July 26, 2022. A weather emergency was declared in Karachi as heavier-than-usual monsoon rains continue to lash Pakistan's biggest city, flooding homes and making streets impassable. (Photo by Rizwan Tabassum/AFP Photo) 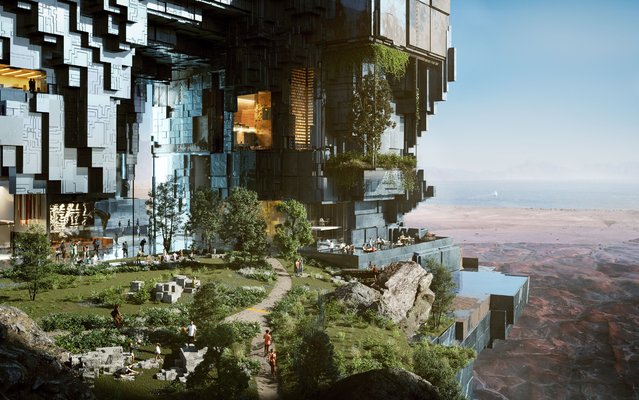 A handout picture provided by Saudi's NEOM on July 26, 2022 shows the design plan for the 500-metre tall parallel structures, known collectively as The Line, in the heart of the Red Sea megacity NEOM. A futuristic megacity in Saudi Arabia will feature two massive, mirror-encased skyscrapers that extend over 170 kilometres of desert and mountain terrain, ultimately housing nine million people, the kingdom's de facto ruler Mohammed bin Salman has announced. (Photo by NEOM/AFP Photo) 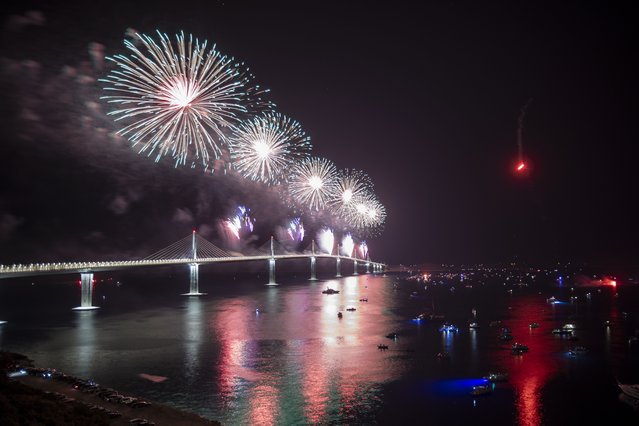 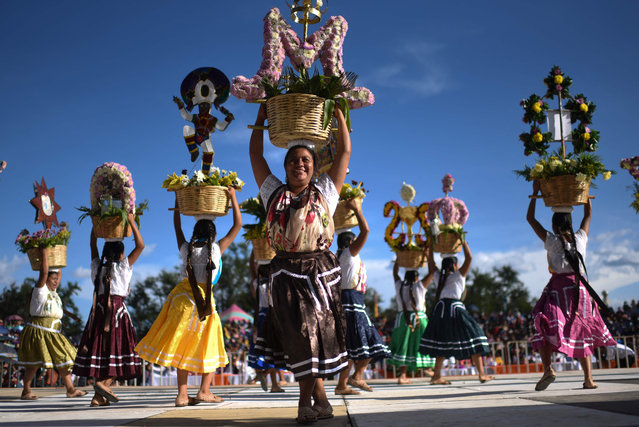 Regional dancers perform at the Guelaguetza Festival in Cuilapam de Guerrero, Oaxaca State, Mexico, on July 25, 2022. The annual Guelaguetza Festival brings together music, dance, gastronomy and crafts from different ethnic groups and tribes from the state of Oaxaca. (Photo by Pedro Pardo/AFP Photo) 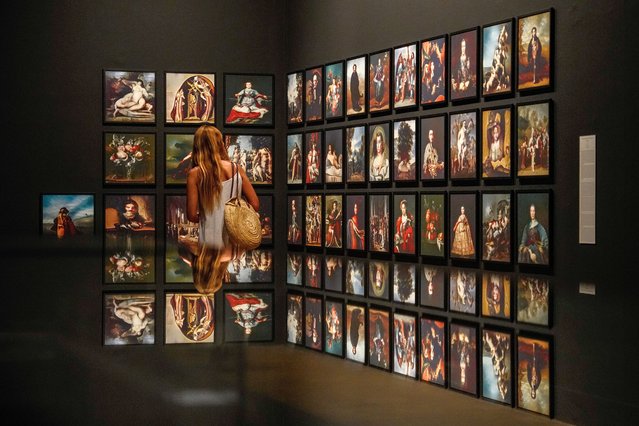 A woman visits the exhibition “Brain(s)” at the Centro de Cultura Contemporanea de Barcelona (CCCB) cultural center in Barcelona, Spain, 26 July 2022. The exhibition is focused on the human brain, conscience and creativity and runs from 27 July to 11 December 2022. (Photo by Enric Fontcuberta/EPA/EFE) 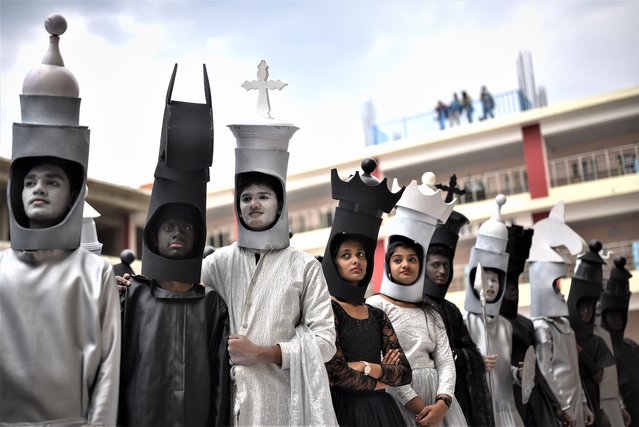 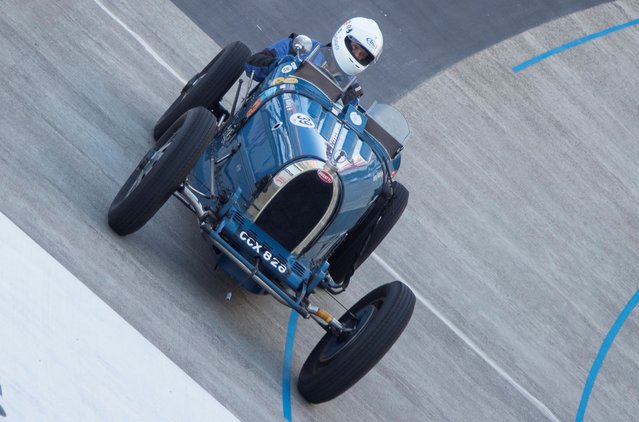 Juerg Koenig drives a 1926 Bugatti 37 A race car during the Indianapolis in Oerlikon race demonstration at the Offene Rennbahn cycling track in Zurich's Oerlikon suburb, Switzerland on July 26, 2022. (Photo by Arnd Wiegmann/Reuters) 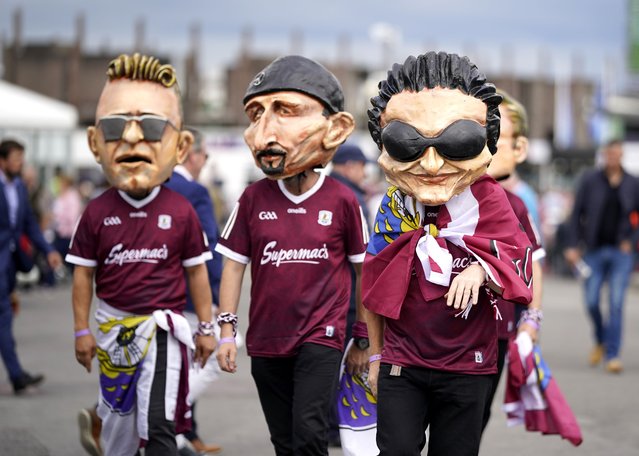 Racegoers in U2 masks during day two of the Galway Races Summer Festival 2022 at Galway Racecourse in County Galway, Ireland on Tuesday, July 26, 2022. (Photo by Niall Carson/PA Images via Getty Images) 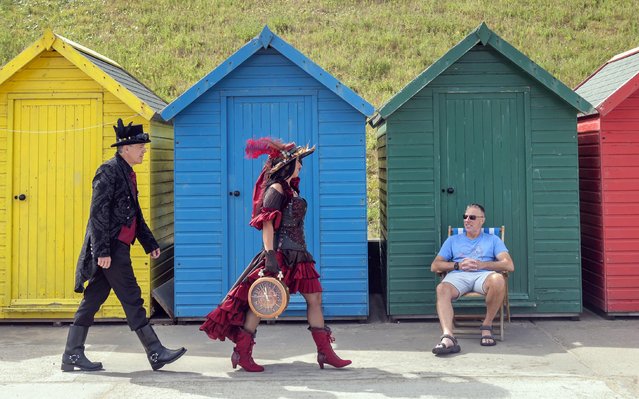 Karen and John Austin interact walk past a sunbather as they attend the Whitby Steampunk Weekend, in Whitby, Yorkshire on Sunday, July 24, 2022. (Photo by Danny Lawson/PA Images via Getty Images) 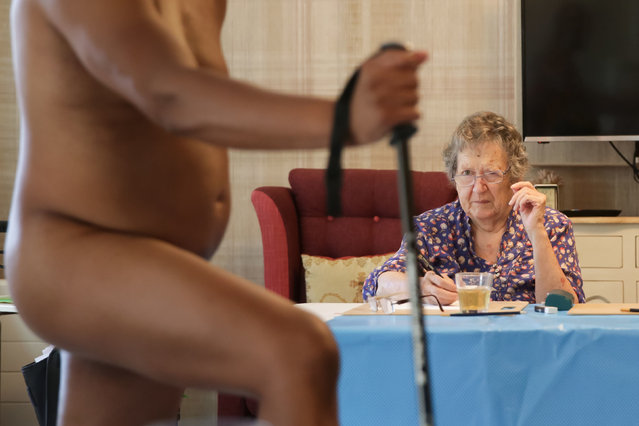 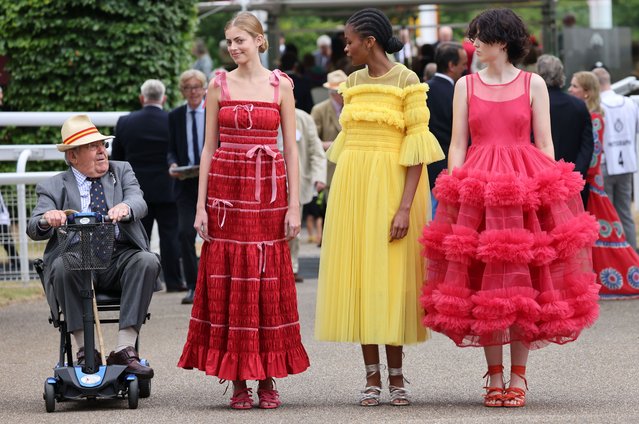 A man riding a mobility scooter gate crashes a fashion shoot with models wearing designer dresses as he rides past them unaware of the photographers they are posing for on the first day of the Goodwood Festival of Speed on June 26, 2022 in London, England. (Photo by Richard Pohle/The Times) 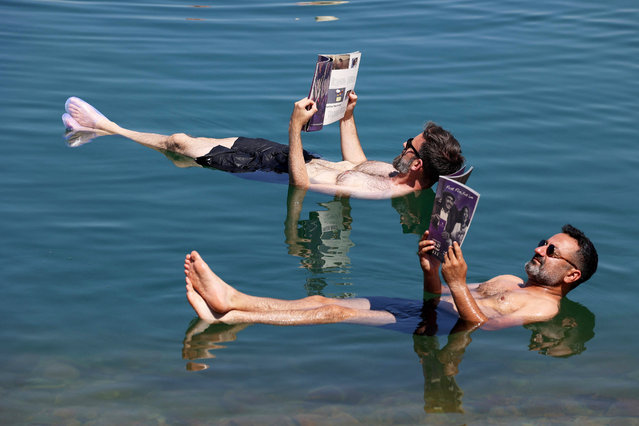