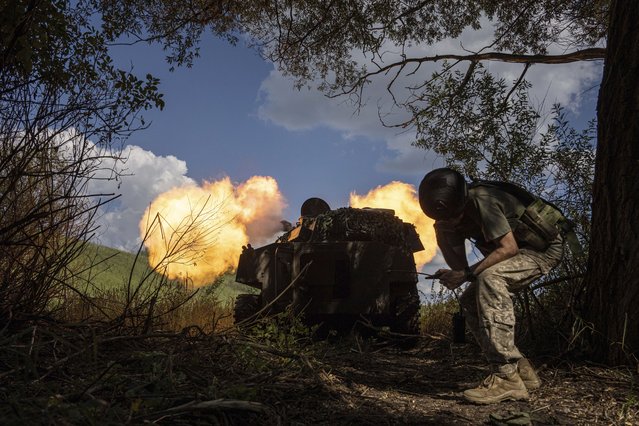 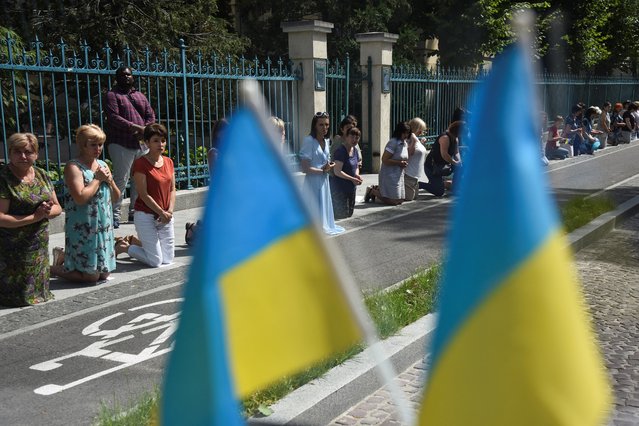 People knee during a funeral ceremony for Ukrainian servicemen Volodymyr Hirniak, Serhii Kovalov and Mykola Zabavchuk, who were recently killed in a battle against Russian troops, as Russia's attack on Ukraine continues, in Lviv, Ukraine on July 26, 2022. (Photo by Pavlo Palamarchuk/Reuters) 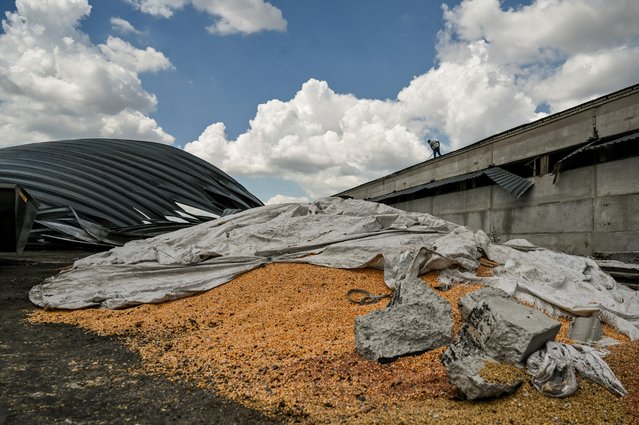 Wheat grains are seen at a place of a storage destroyed by a Russian military strike, as Russia's attack on Ukraine continues, in the village of Yulivka, Zaporizhzhia region, Ukraine on July 27, 2022. (Photo by Dmytro Smolienko/Reuters) 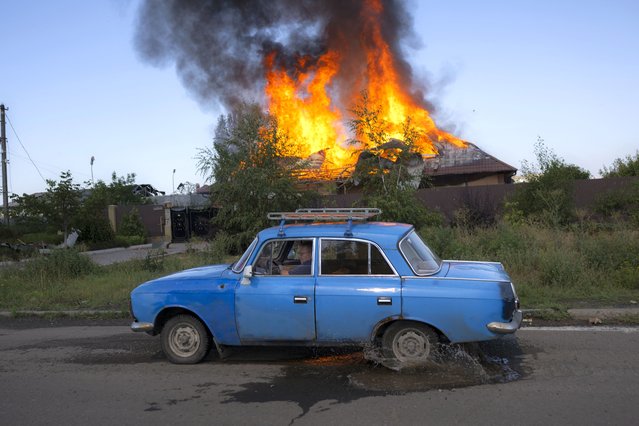 A Ukrainien man drives past a burning house hit by a shell in the outskirts of Bakhmut, Eastern Ukraine, on July 27, 2022, amid the Russian invasion of Ukraine. (Photo by Bulent Kilic/AFP Photo) 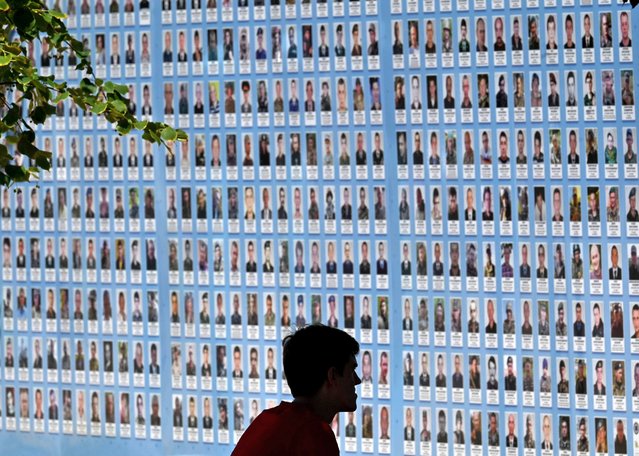 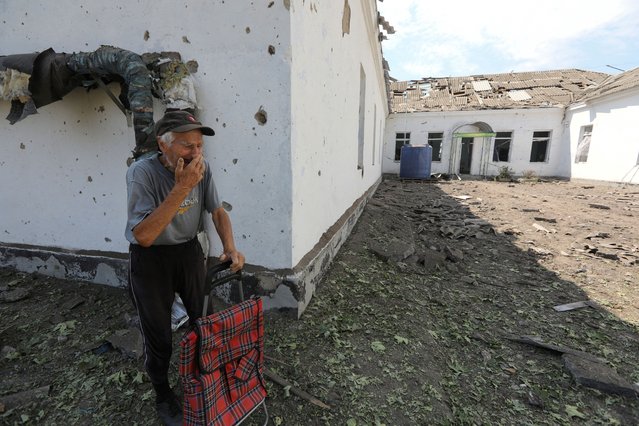 A local resident reacts near a school building damaged by a Russian missile strike, as Russia's attack on Ukraine continues, in Mykolaiv, Ukraine on July 28, 2022. (Photo by Mykola Tymchenko/Reuters) 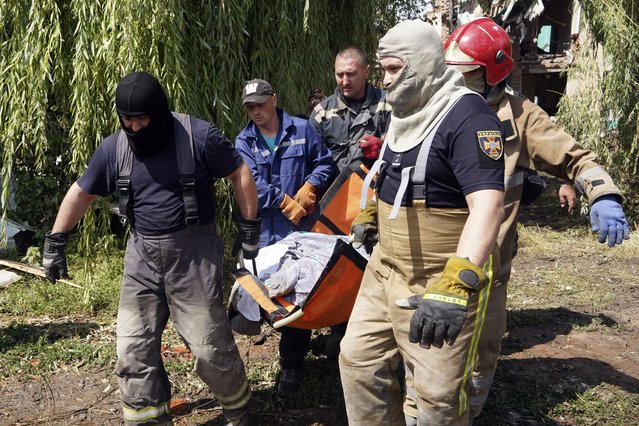 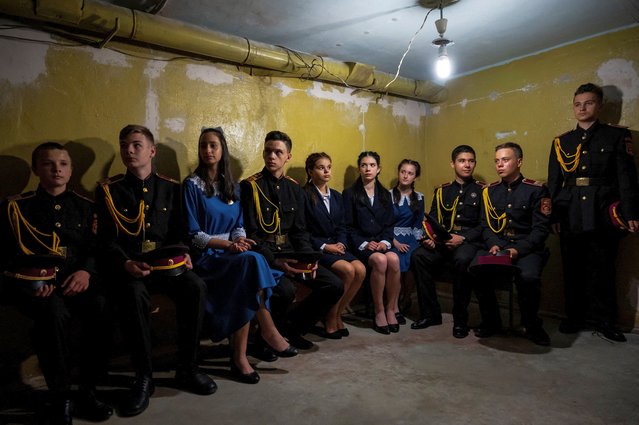 Students sit inside a bomb shelter of a cadet lyceum as they conduct an air-raid alarm actions training amid Russia's attack on Ukraine continues, in Kyiv, Ukraine on July 27, 2022. (Photo by Viacheslav Ratynskyi/Reuters) 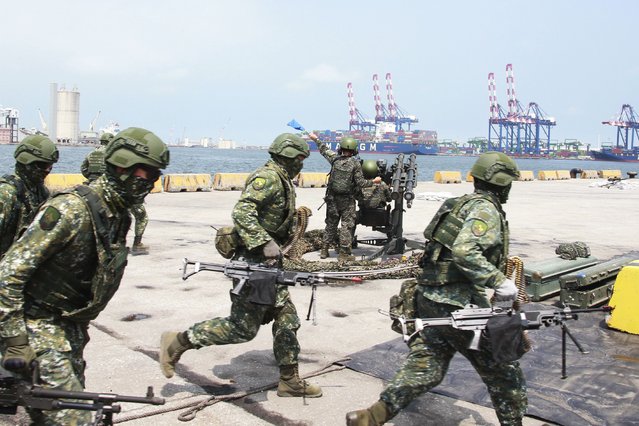 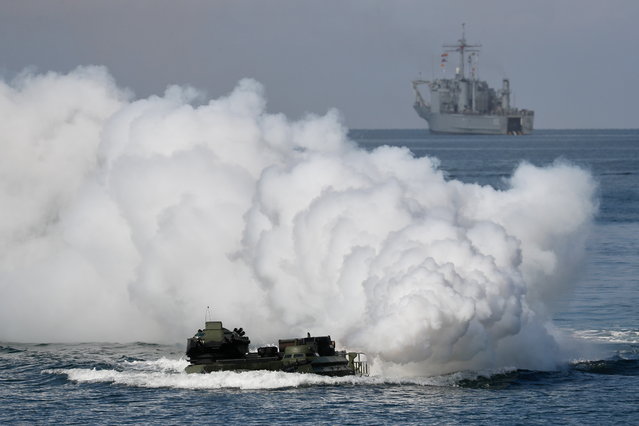 Taiwan's AAV7 amphibious assault vehicle maneuvers across the sea in front of a Newport-class tank landing ship during Amphibious landing drill as part of the Han Kuang military exercise in Pingtung, Taiwan, 28 July 2022. The drill is part of the Taiwan's annual Han Kuang military exercise that simulates response to enemies attack on major targets in Taiwan. (Photo by Ritchie B. Tongo/EPA/EFE) 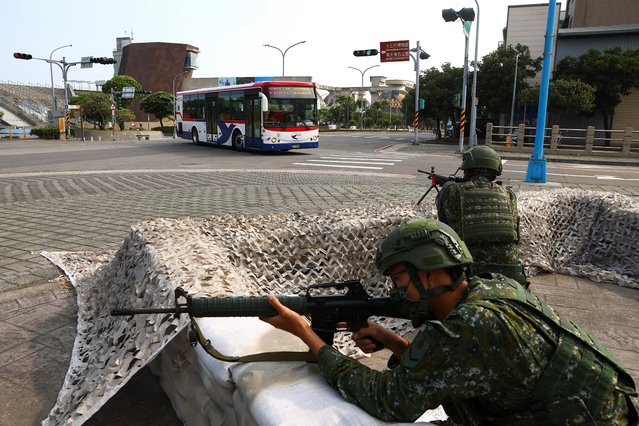 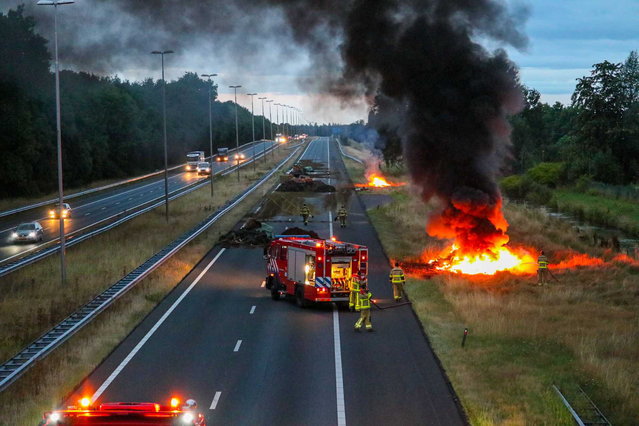 Firefighters at the scene as farmers set fire to manure and hay bales during a protest along the A50 in Apeldoorn, the Netherlands, 27 July 2022. Dutch Farmers' activists are demonstrating in several places in the country against the government's nitrogen policy. (Photo by News United/EPA/EFE) 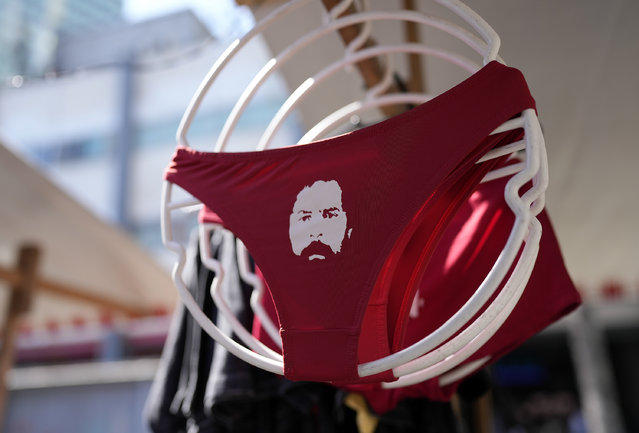 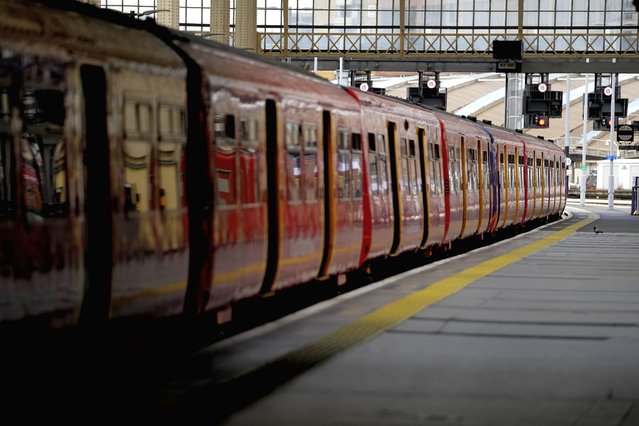 A train parks at an abandoned platform at Waterloo Station as members of the Rail, Maritime and Transport union (RMT) began fresh nationwide strikes in a bitter dispute over pay, jobs and conditions, in London, Wednesday, July 27, 2022. Train companies said only about a fifth of services across the country were due to run on Wednesday. (Photo by Frank Augstein/AP Photo) 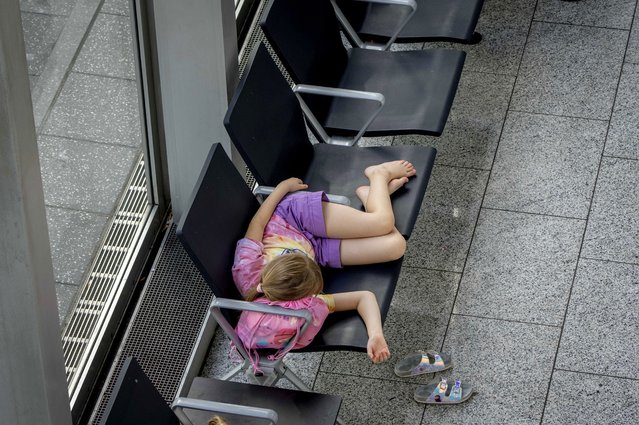 A girl sleeps on chairs at the international airport in Frankfurt, Germany, Wednesday, July 27, 2022. Lufthansa went for a 24-hours-strike on Wednesday, most of the Lufthansa flights had to be cancelled. (Photo by Michael Probst/AP Photo) 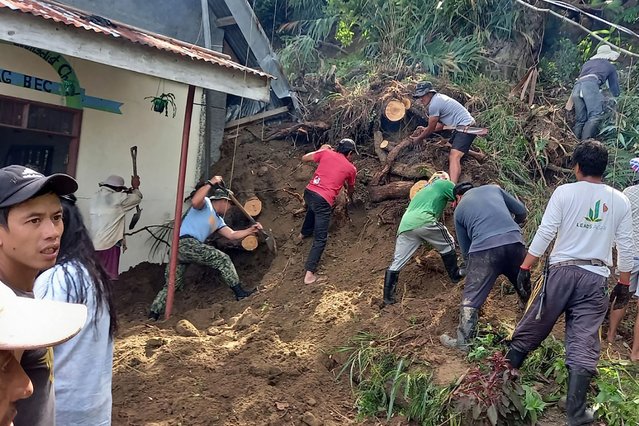 This handout photo released by the Police Regional Office-Cordillera (PROCOR) on July 27, 2022 shows villagers and rescue workers digging next to a chapel following a landslide caused by a 7.0-magnitude earthquake in the northern Philippines, in the village of Mayag in Bauko. (Photo by Police Regional Office-Cordillera (PROCOR)/Handout via AFP Photo) 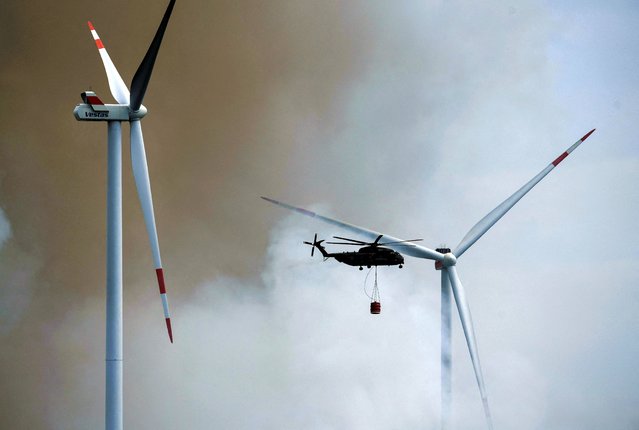 A firefighting helicopter filled with water flies, as firefighters work to extinguish a forest fire, during a heatwave, in Falkenberg, in the district of Koelsa, Germany on July 26, 2022. (Photo by Annegret Hilse/Reuters) 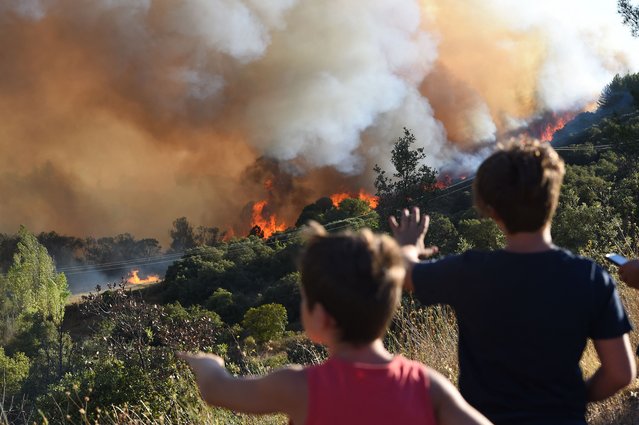 Pedestrians look at a forest fire near Gignac, southern France, on July 26, 2022, as the country endures a dry summer with wildfires destroying numerous forests across France. (Photo by Sylvain Thomas/AFP Photo) 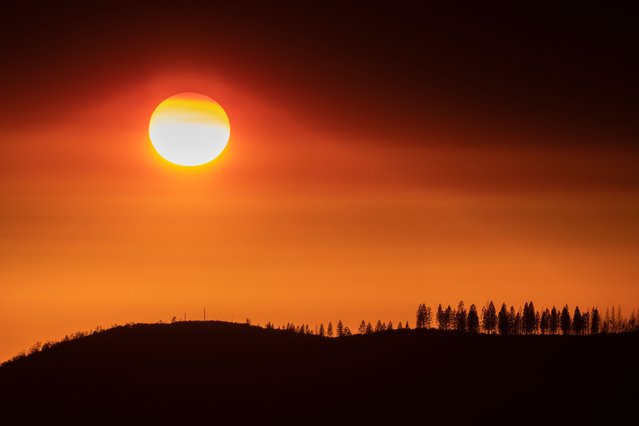 This photograph taken on July 25, 2022, shows parts of a forest destroyed by the Oak Fire with a sunset in the background near Mariposa, California, burning west of Yosemite National Park where the Washburn Fire has threatened the giant sequoia trees of the Mariposa Grove. - Firefighters were battling California's largest wildfire of the summer on July 25, 2022, a blaze near famed Yosemite National Park that has forced thousands of people to evacuate, officials said, as the Oak Fire in Mariposa County has engulfed 16,791 acres (6.795 hectares) and is 10 percent contained, Cal Fire, the state fire department, said. (Photo by David McNew/AFP Photo) 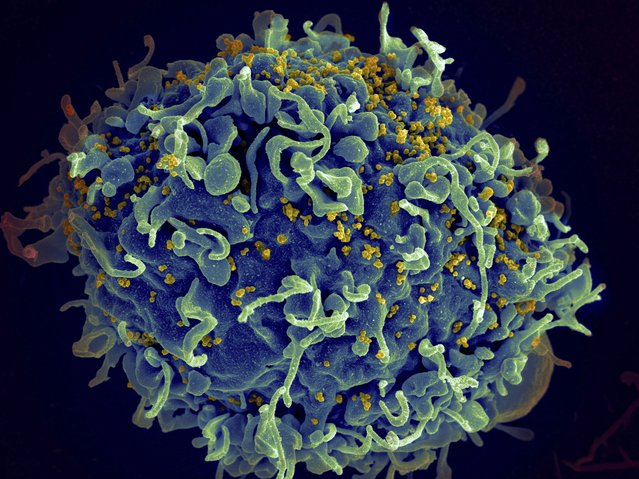 This electron microscope image made available by the U.S. National Institutes of Health shows a human T cell, in blue, under attack by HIV, in yellow, the virus that causes AIDS. Hard-won progress against HIV has stalled, putting millions of lives at risk, according to an alarming report Wednesday, July 27, 2022 on how the collision with the COVID-19 pandemic and other global crises is jeopardizing efforts to end AIDS. The report from UNAIDS is being released ahead of the start of the International AIDS Conference later this week. (Photo by Seth Pincus, Elizabeth Fischer, Austin Athman/National Institute of Allergy and Infectious Diseases/NIH via AP Photo) 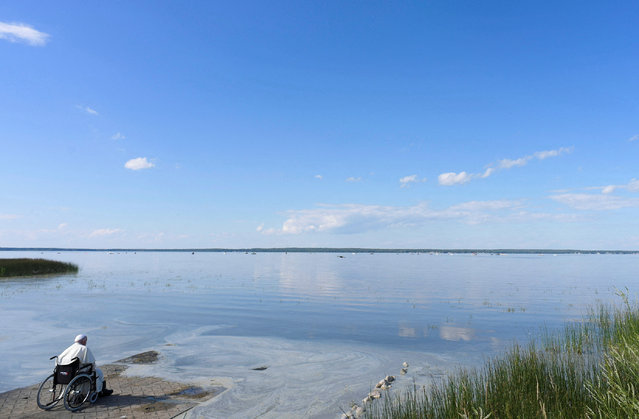 Pope Francis attends the Lac Ste. Anne Pilgrimage, an annual pilgrimage that welcomes tens of thousands of Indigenous participants from throughout Canada and the United States each year, at Lac Ste. Anne, Alberta, Canada on July 26, 2022. (Photo by Vatican Media/Handout via Reuters) 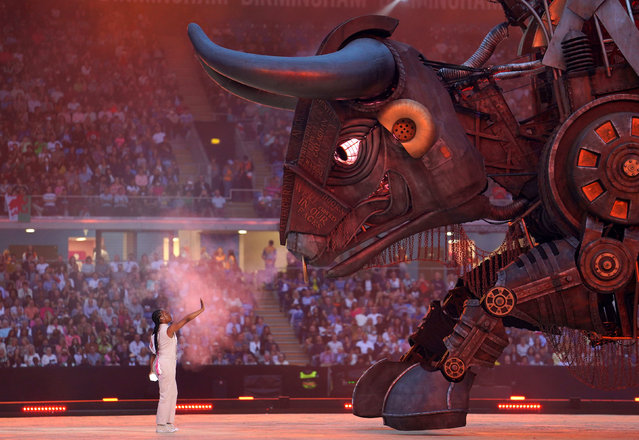 The Women standing up to The Raging Bull during the opening ceremony of the Birmingham 2022 Commonwealth Games at the Alexander Stadium, Birmingham on Thursday, July 28, 2022. (Photo by Davies Davies/PA Wire) 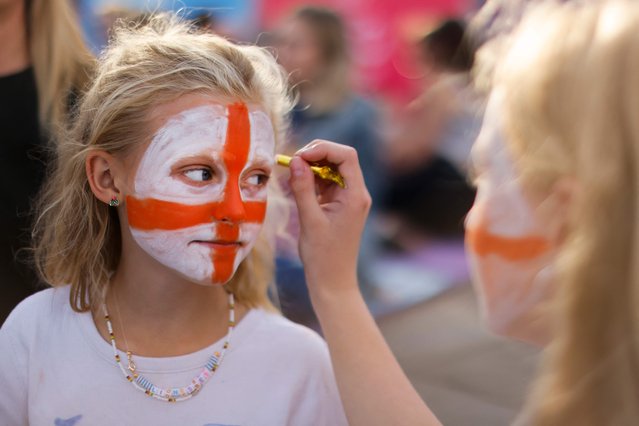 Two England's supporters paint their face with the England's flag as they arrive on the fan zone in Trafalgar Square in front of the National Gallery in London, to attend the UEFA Women's Euro 2022 semi-final football match between England and Sweden at the Bramall Lane stadium, in Sheffield, on July 26, 2022. (Photo by Carlos Jasso/AFP Photo) 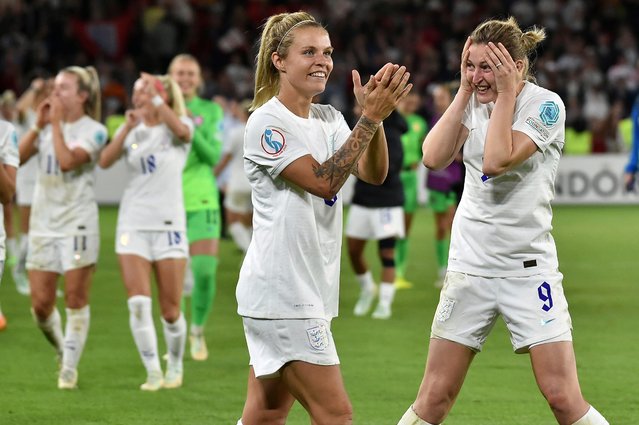 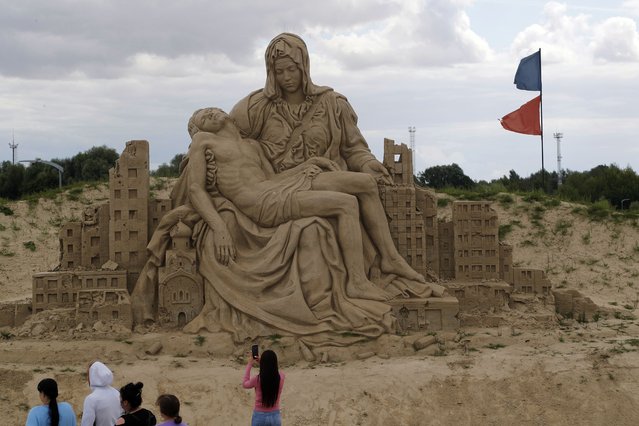 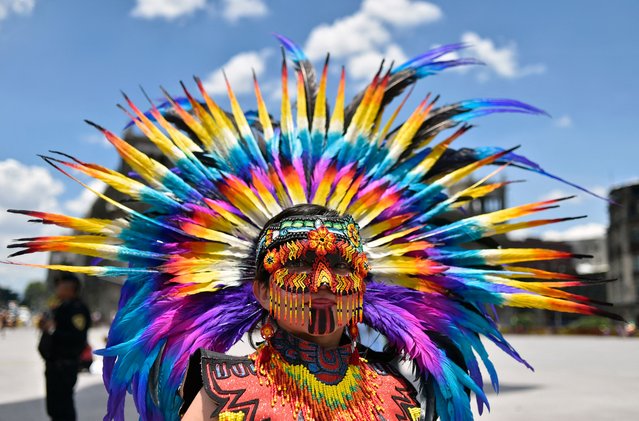 A member of a cultural group of pre-Hispanic identity participates in the celebration of the 697th anniversary of the founding of Tenochtitlan, capital of the Aztec Empire or Mexicas, at Zocalo square in Mexico City on July 26, 2022. (Photo by Alfredo Estrella/AFP Photo) 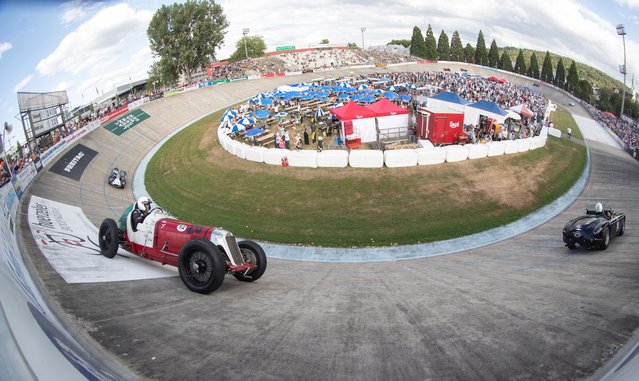 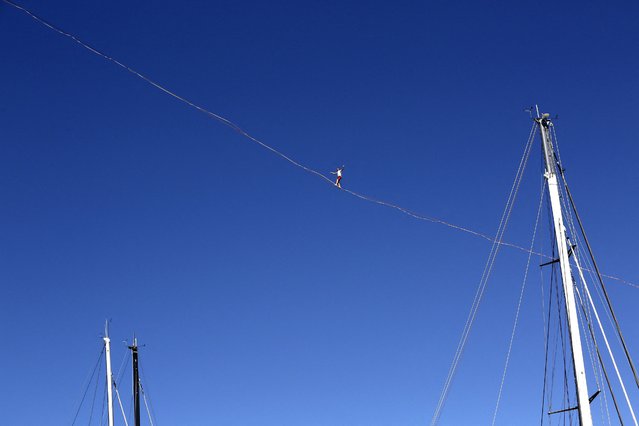 French tightrope walker Nathan Paulin walks on a slackline over the harbour of Bonifacio, in the French Mediterranean island of Corsica, on July 28, 2022. (Photo by Pascal Pochard-Casabianca/AFP Photo) 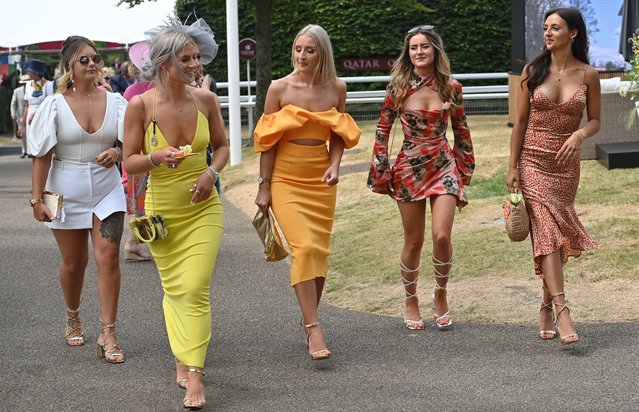 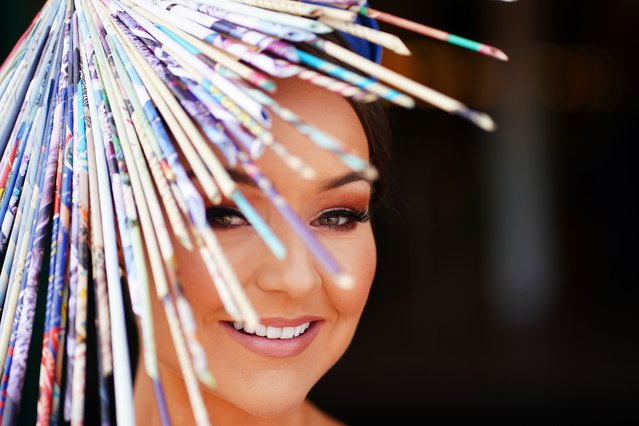