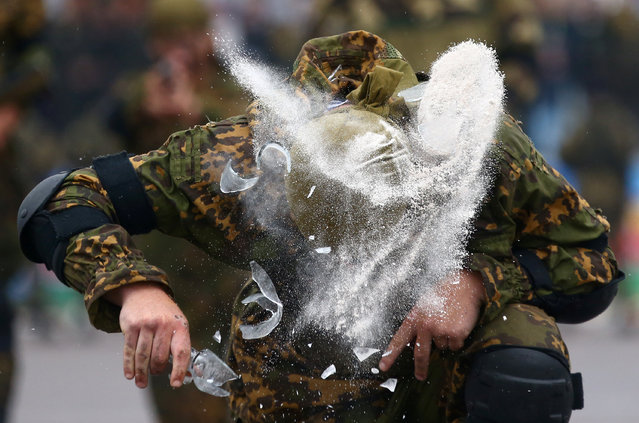 Belarusian paratroopers perform during the celebration of the Day of the Paratrooper, which is celebrated in Belarus on August 2, in Minsk, Belarus July 29, 2017. (Photo by Vasily Fedosenko/Reuters) 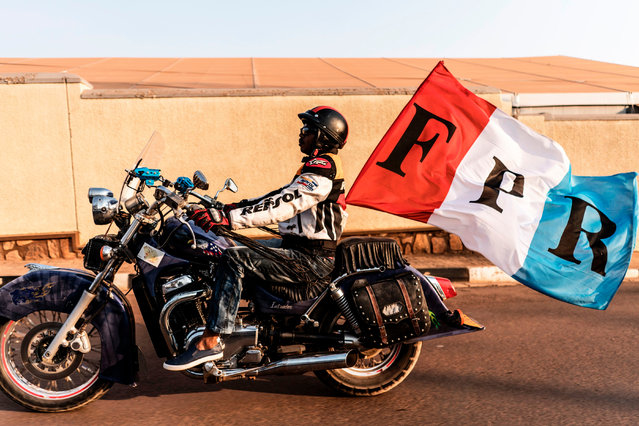 A supporter of the governing Rwandan Patriotic Front party ride his motorbike during the last days of the presidential election campaigning in Kigali, on July 29, 2017. The presidential elections will be held in Rwanda on 4 August 2017, pitting opposition presidential aspirants Frank Habineza of the the Democratic Green Party (DGP) and independent Philippe Mpayimana against incumbent President Paul Kagame who has been in charge of the country since 2000 after taking over from the then President Pasteur Bizimungu, who resigned paving the way for vice- president Kagame to take charge of the country ravaged by the 1994 genocide. (Photo by Marco Longari/AFP Photo) 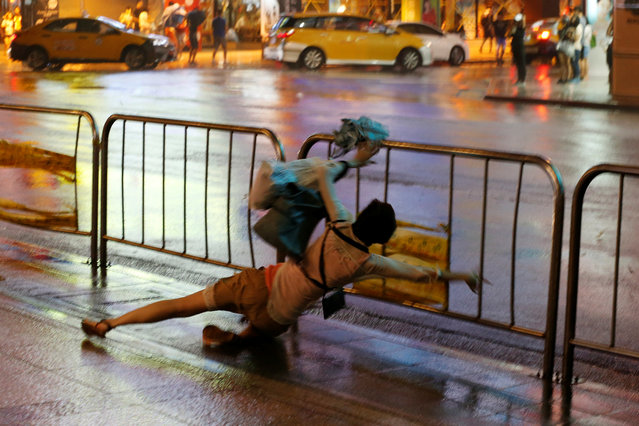 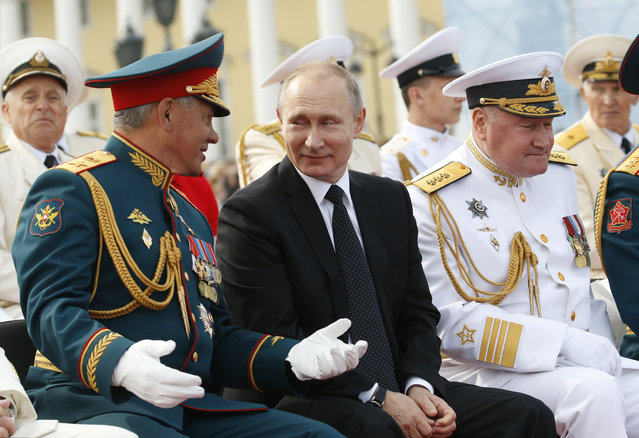 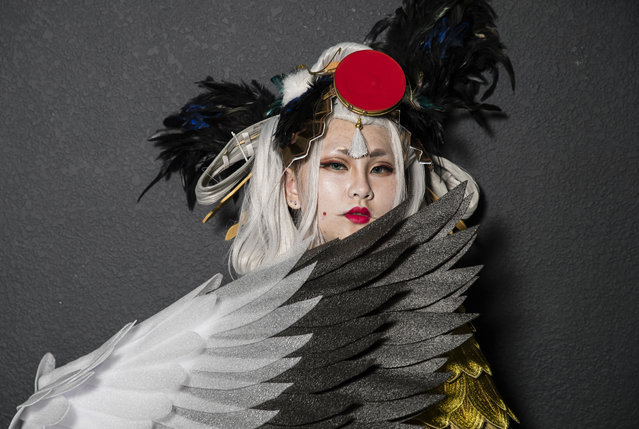 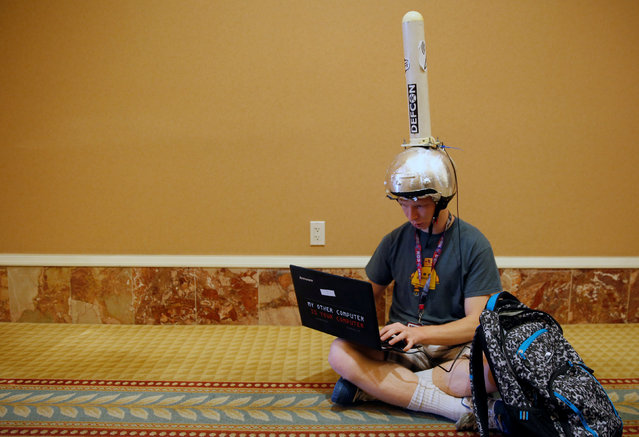 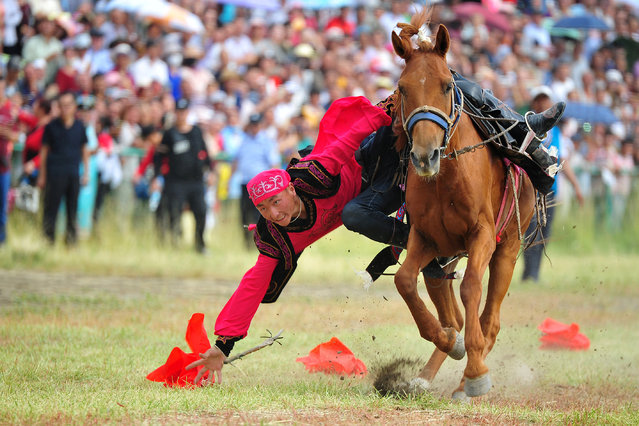 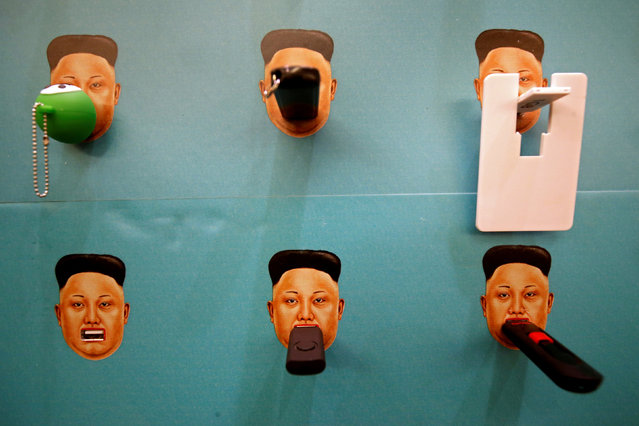 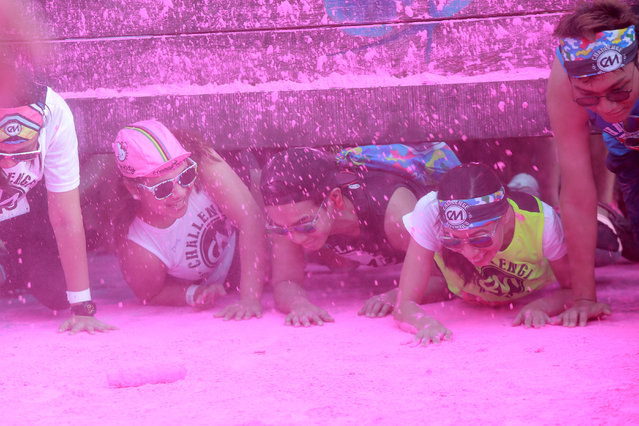 Runners crawl under a wooden wall as part of an obstacle course during the 2017 Color Manila Challenge Fun Run in Taguig City, the Philippines, July 31, 2017. Thousands of people participated in the fun run which involves running through various obstacles which aims to promote a healthier lifestyle. (Photo by Rouelle Umali/Xinhua/Barcroft Images) 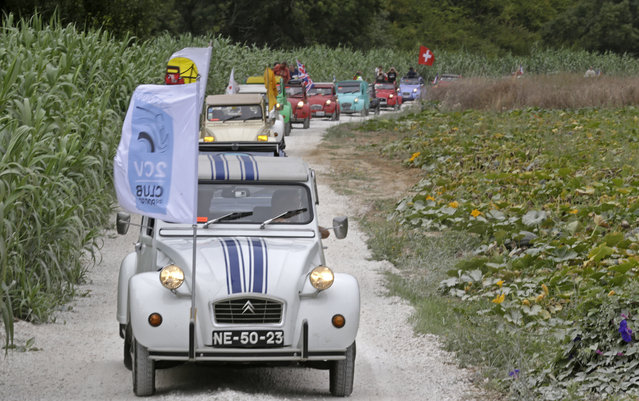 Cars parade through the country side between Ericeira and Mafra during the World 2017 2CV Meeting July 30, 2017. The event is held between the 26th and the 31st of July 2017, 30 years after Portugal hosted the seventh 2CV World Meeting in 1987, and will include activities ranging from an open air fair, a competition to disassemble and reassemble, an “elegance” contest for original and modofied 2CV's, a chimes concert, to a short term 2CV museum hosted by the Marfa national palace featuring vehicles from the Citroen Heritage collection purposely brought from Paris. (Photo by Jose Manuel Ribeiro/AFP Photo) 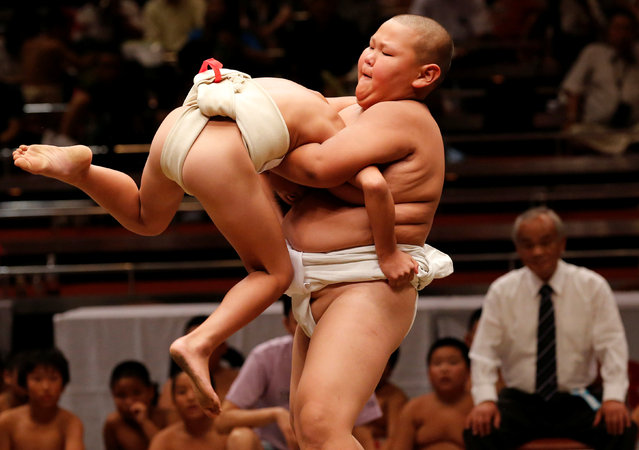 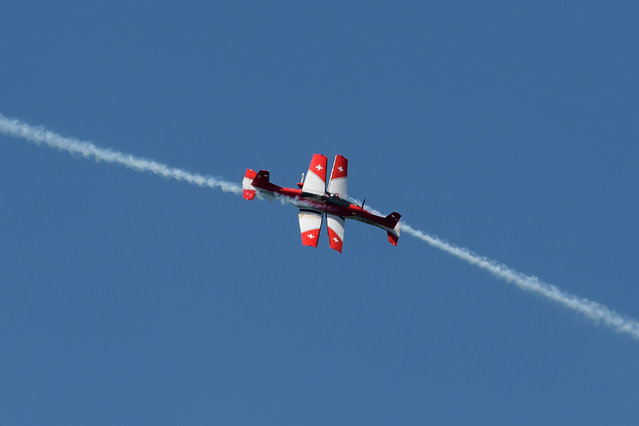 PC-7 Pilatus planes of the Swiss Air Force Aerobatics Team cross during a flight display prior to the final of the Swiss Open ATP 250 tennis tournament on July 30, 2017 in Gstaad. (Photo by Fabrice Coffrini/AFP Photo) 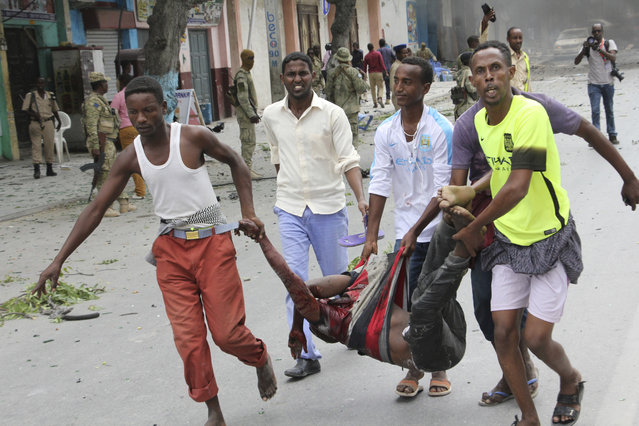 Somalis carry away a wounded civilian who was injured in a suicide car bomb attack on a popular mall in Mogadishu, Somalia, Sunday, July 30, 2017. A police officer says a car bomb blast near a police station in Somalia's capital has killed at least five people and wounded at least 13 others. Most of the victims are civilians. The Somalia-based extremist group al-Shabab often carries out deadly bombings in Mogadishu. (Photo by Farah Abdi Warsameh/AP Photo) 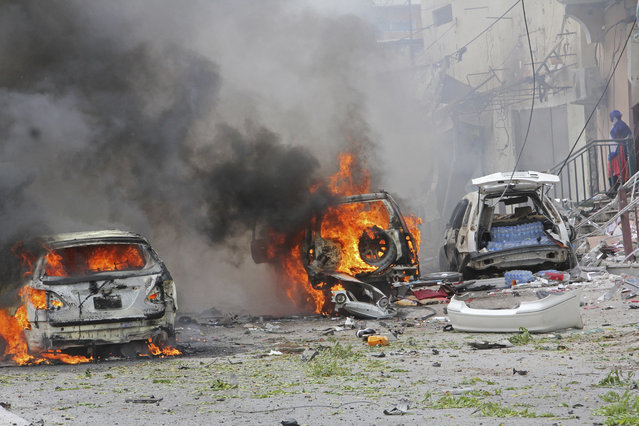 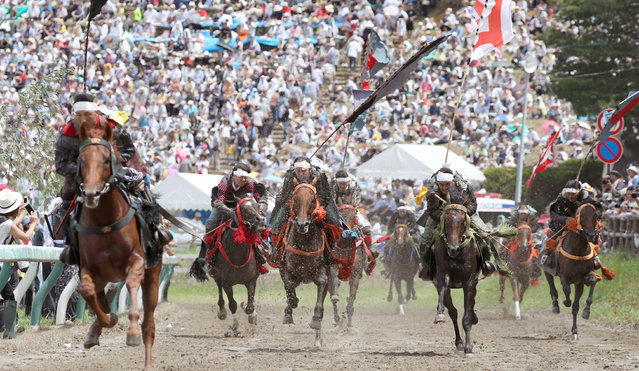 Participants clad in Japan's traditional samurai armor race in the Kacchu Keiba or the Armor Horse Racing during the annual Soma Nomaoi festival in Hibarigahara field in Minamisoma in Fukushima Prefecture, northeastern Japan, Sunday, July 30, 2017. The racing, competed by 12 horsemen over the distance of 1,000-meter (1,100-yard), is the main event of the 1,000-year-old festival jointly organized by three shrines in Soma, a famous horse-breeding district in Fukushima. (Photo by Jun Hirata/Kyodo News via AP Photo) 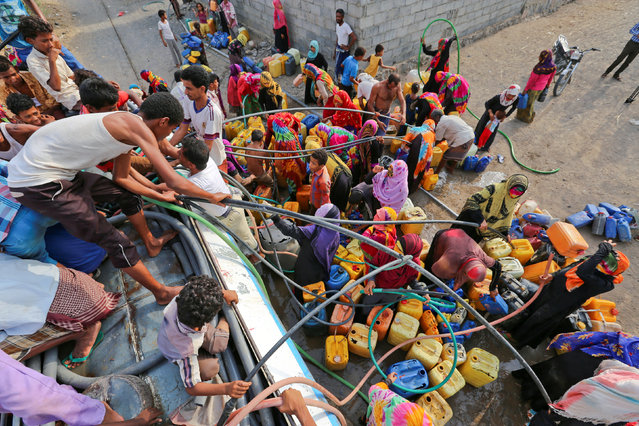 People gather around a charity tanker truck to fill up their jerrycans with drinking water in Bajil of the Red Sea province of Hodeidah, Yemen July 29, 2017. (Photo by Abduljabbar Zeyad/Reuters) 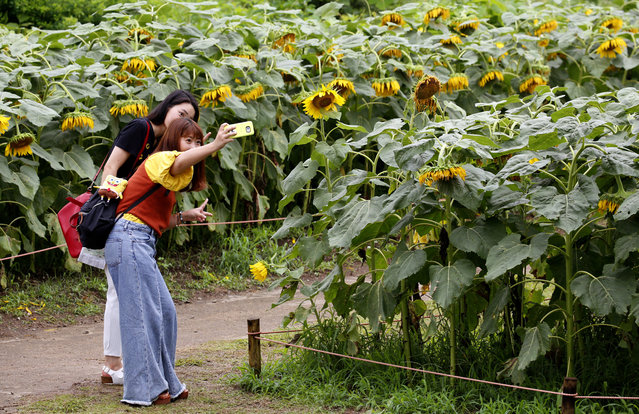 Visitors pose for a selfie in a field of blooming sunflowers at a park in Tachikawa in the western suburbs of Tokyo, Sunday, July 30, 2017. About 10,000 sunflowers at the park attract visitors every summer. (Photo by Shizuo Kambayashi/AP Photo) 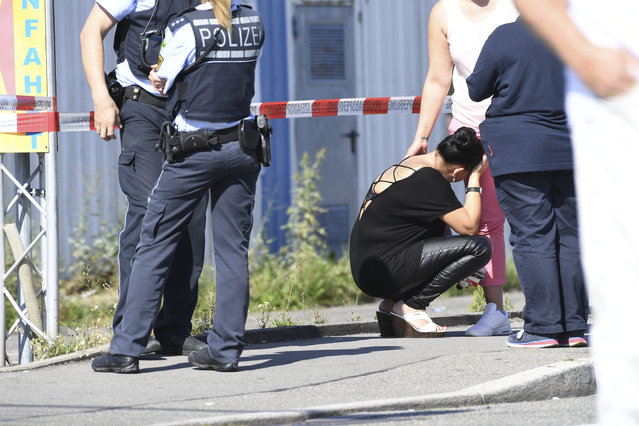 A visitor, center, waits to be questioned by police near a discotheque in Constance, at Lake Constance, Germany, Sunday, July 30, 2017. Police say a shooting in Germany’s Baden-Wurttemberg state has claimed two lives, including that of the gunman. They say the early-morning shooting Sunday at a discotheque in the town of Constance also left three guests seriously wounded. A tweet by Constance police says one person was killed by the shooter when he opened fire, also wounding the other victims. He then fled, was shot by police and died later in hospital. (Photo by Felix Kaestle/DPA via AP Photo) 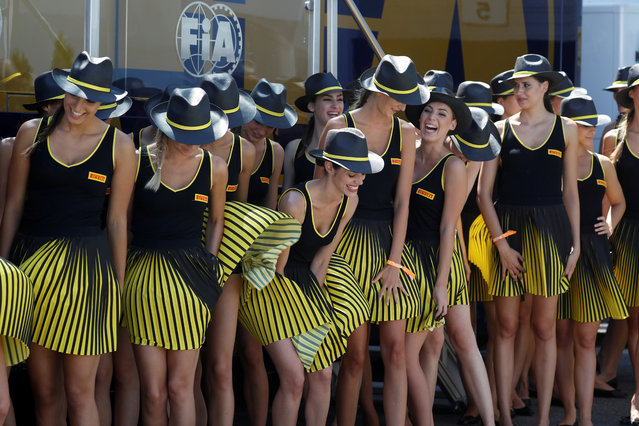 Grid girls are seen at the Hungaroring racing circuit in Budapest prior to the Formula One Hungarian Grand Prix on July 30, 2017. (Photo by Laszlo Balogh/Reuters) 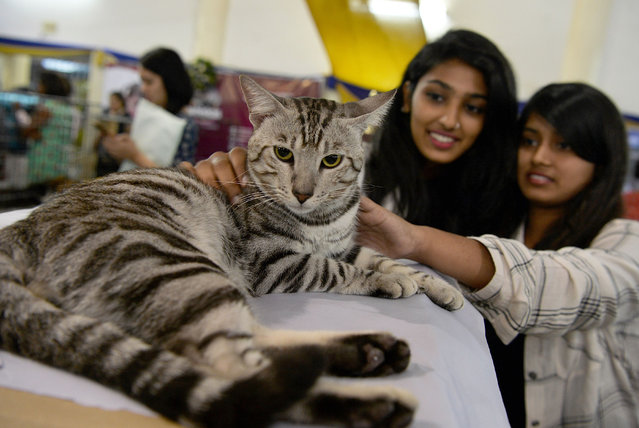 A visitor pat a cat during the 8th International Cat Show organised by the World Cat Federation in Bangalore on July 30, 2017. (Photo by Manjunath Kiran/AFP Photo) 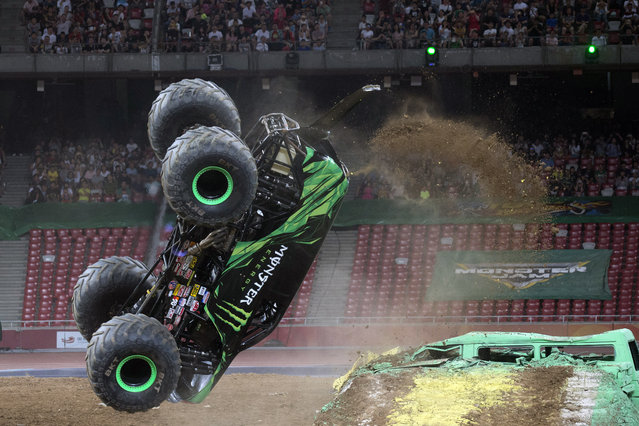