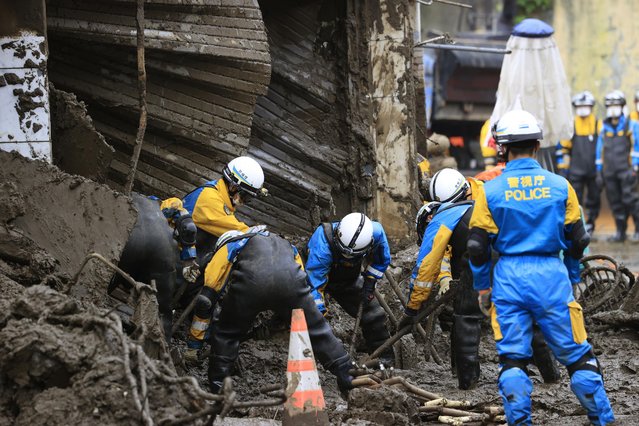 Police officers continue a search operation for missing people at the site of a mudslide in Atami, southwest of Tokyo Tuesday, July 6, 2021. Rescue workers struggled with sticky mud and risks of more mudslides Tuesday as they searched for people may have been trapped after a torrent of mud that ripped through a seaside hot springs resort. (Photo by Kyodo News via AP Photo) 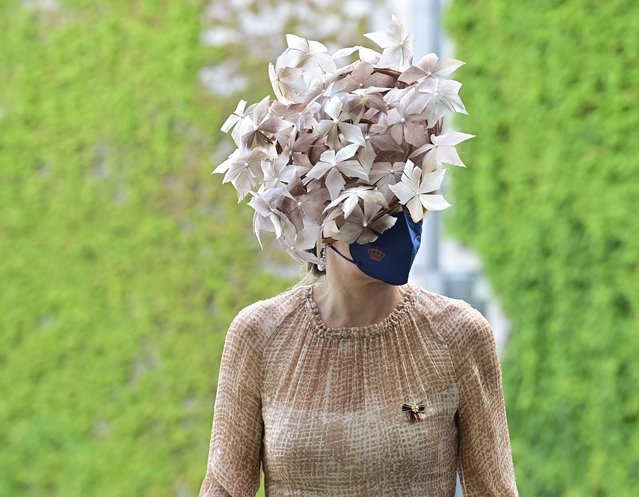 Queen Maxima of the Netherlands arrives to be greeted by German Chancellor (unseen) at the Chancellery in Berlin on July 6, 2021. The Dutch royal couple is on a state visit to Germany until July 7. (Photo by Tobias Schwarz/AFP Photo) 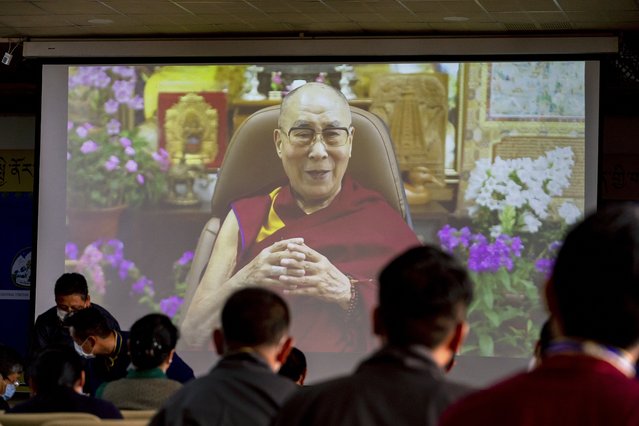 Exile Tibetan government officials watch a message from their spiritual leader the Dalai Lama on a screen during a ceremony to mark the 86th birthday of the Tibetan leader in Dharmsala, India, Tuesday, July 6, 2021. This year, due to the coronavirus pandemic, the celebrations were muted and behind closed doors. (Photo by Ashwini Bhatia/AP Photo) 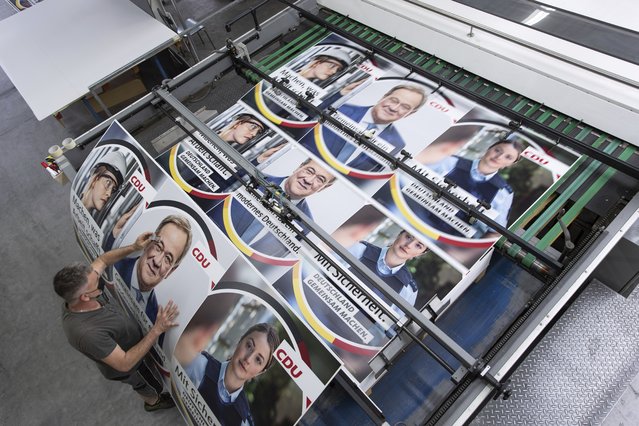 Police officers look on as they stand guard to secure the area where Dutch celebrity crime reporter Peter R. de Vries, known for his reporting on some of the most renowned criminals in the Netherlands, was reportedly shot and seriously injured, in Amsterdam, Netherlands, July 6, 2021. (Photo by Eva Plevier/Reuters) 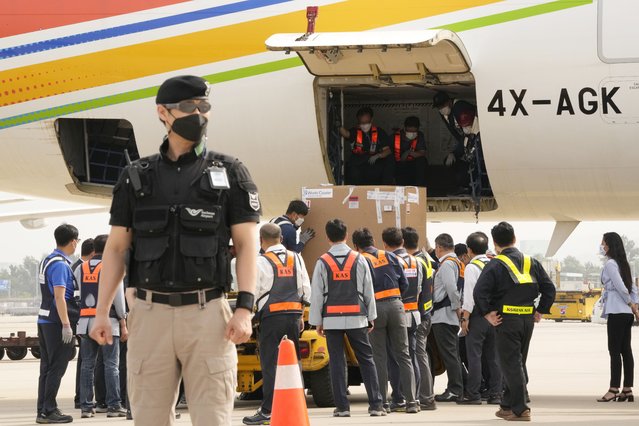 A batch of the Pfizer COVID-19 vaccines sent by Israel is unloaded at the Incheon International Airport in Incheon, South Korea, Wednesday, July 7, 2021. South Korea on Wednesday received 700,000 Pfizer shots from Israel in exchange for a future shipment of vaccines to Israel from September to November, when officials hope South Korea's shortage will have eased. (Photo by Ahn Young-joon/AP Photo) 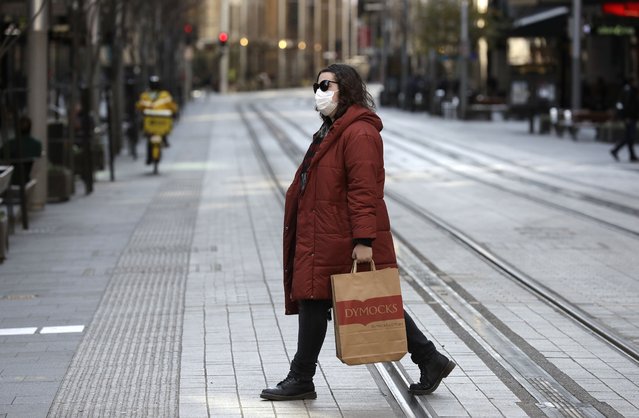 A woman crosses a normally busy street in Sydney, Wednesday, July 7, 2021. Sydney's two-week lockdown has been extended for another week due to the vulnerability of an Australia population largely unvaccinated against COVID-19, officials said. (Photo by Rick Rycroft/AP Photo) 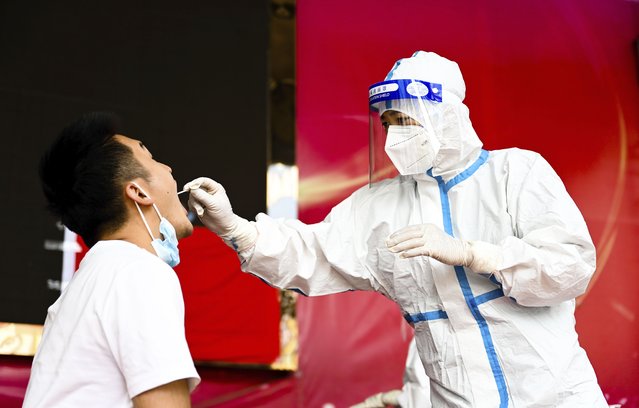 In this photo released by Xinhua News Agency, a medical worker collects a swab sample for nucleic acid test in Ruili City of southwest China's Yunnan Province, on July 5, 2021. Authorities in the Chinese city bordering Myanmar locked down the city Wednesday, July 7, shutting most businesses and requiring residents to stay at home, as a fresh outbreak of COVID-19 expanded. (Photo by Wang Guansen/Xinhua via AP Photo) 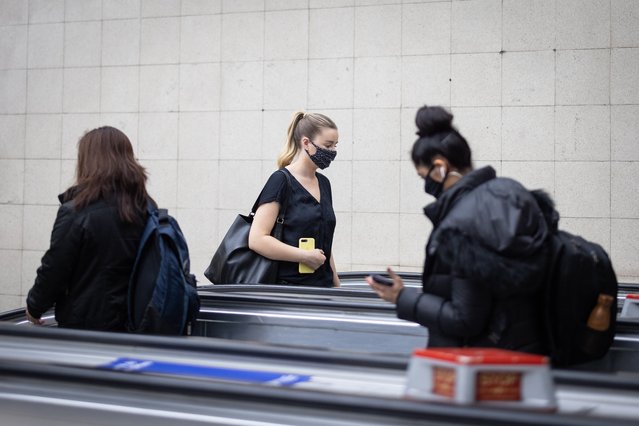 Commuters travel on the underground network during rush hour on July 06, 2021 in London, England. The UK government will no longer compel mask-wearing in enclosed spaces after Covid-19 rules end in England on July 19, but it has left the door open for individual transport providers to require them. London Mayor Sadiq Khan has said he supports retaining the mask requirement for riders in the Transport for London network. (Photo by Leon Neal/Getty Images) 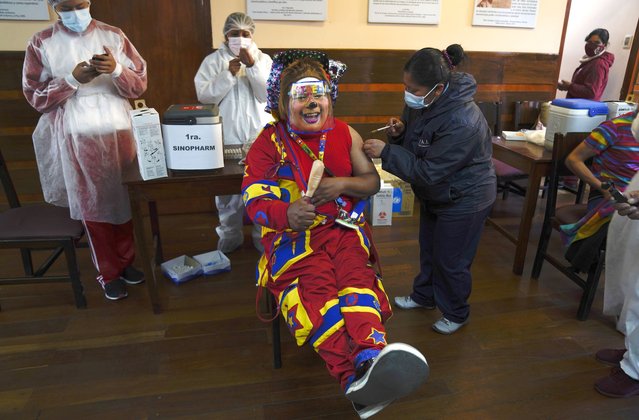 A health worker is injected with the Sinopharm COVID-19 vaccine to a clown during a vaccination campaign for people over 18 at the public University San Andres, in La Paz, Bolivia, Monday, July 5, 2021. (Photo by Juan Karita/AP Photo) 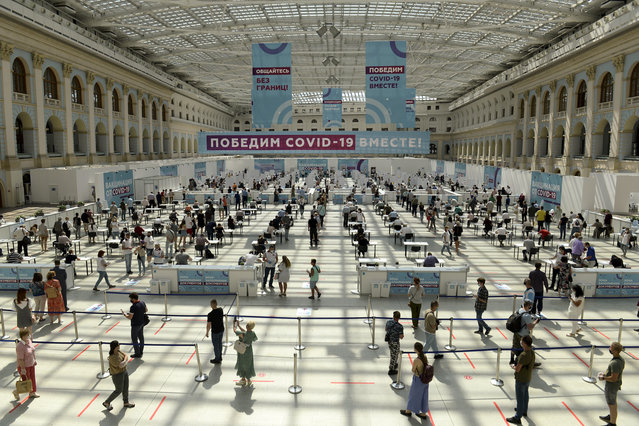 People wait in line for a COVID-19 vaccine at a vaccination center in Gostinny Dvora huge exhibition place in Moscow, Russia, Tuesday, July 6, 2021. Russia on Sunday reported about 23,387 new cases of coronavirus infection, the largest numbers since January, as the country faces a sharp surge over the past month. (Photo by Denis Kaminev/AP Photo) 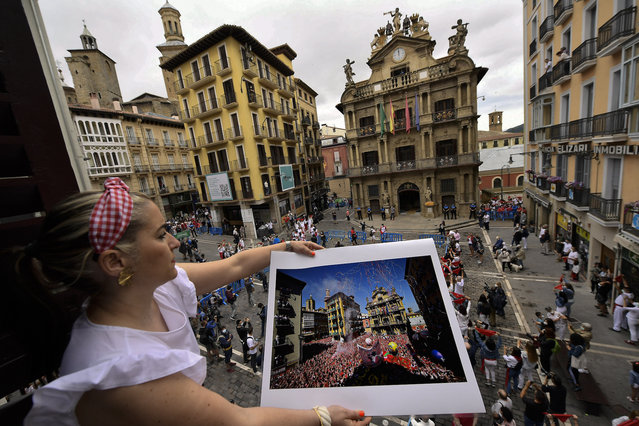 Cristina Esparza holds a San Fermin July 2019 photograph, in Pamplona, northern Spain, Tuesday July 6, 2021, on the day the “txupinazo” would usually take place to start the famous San Fermin festival, which was canceled once more year due to COVID-19 pandemic. (Photo by Alvaro Barrientos/AP Photo) 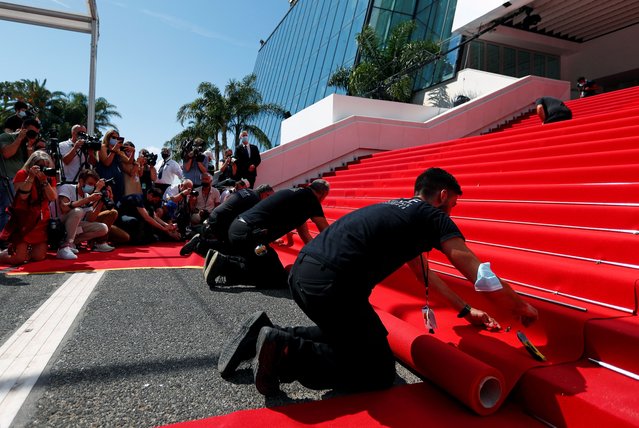 Photographers and cameramen watch as workers install the red carpet in front of the main entrance of the Festival Palace before the opening ceremony of the 74th Cannes Film Festival in Cannes, France on July 6, 2021. (Photo by Johanna Geron/Reuters) 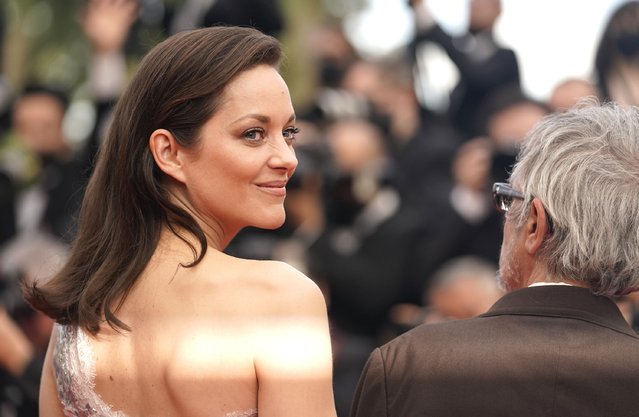 French actress and musician Marion Cotillard poses for photographers upon arrival at the premiere of the film 'Annette' and the opening ceremony of the 74th international film festival, Cannes, southern France, Tuesday, July 6, 2021. (Photo by Brynn Anderson/AP Photo) 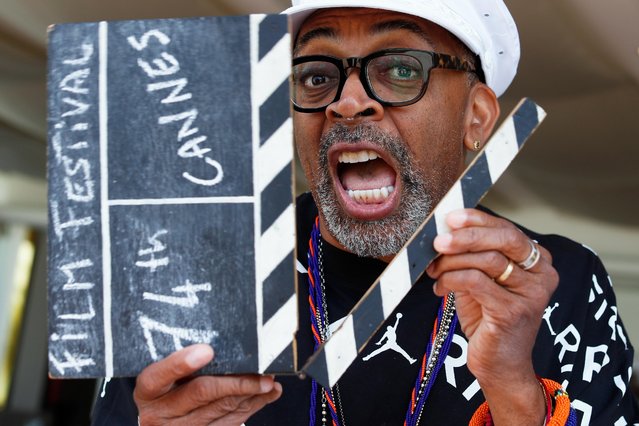 Spike Lee, Jury President of the 74th Cannes Film Festival, holds a film clapper before the opening of the Cannes film festival on July 06, 2021 in Cannes, France. (Photo by Eric Gaillard/Reuters) 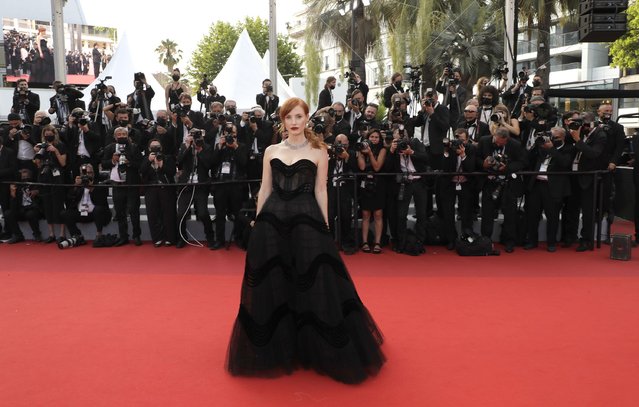 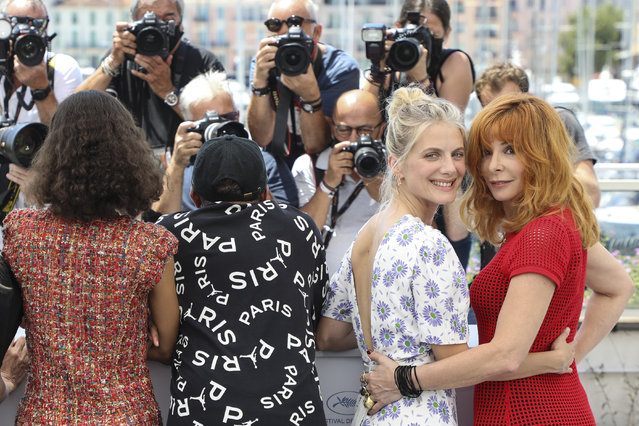