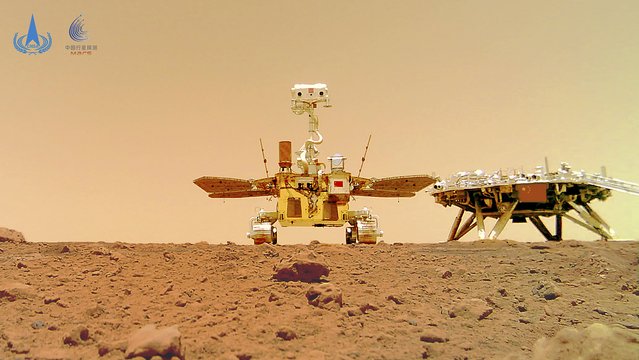 In this image released by the China National Space Administration (CNSA) on Friday, June 11, 2021, the Chinese Mars rover Zhurong is seen near its landing platform taken by a remote camera that was dropped into position by the rover. China on Friday released a series of photos taken by its Zhurong rover on the surface of Mars, including one of the rover itself taken by a remote camera. (Photo by CNSA via AP Photo) 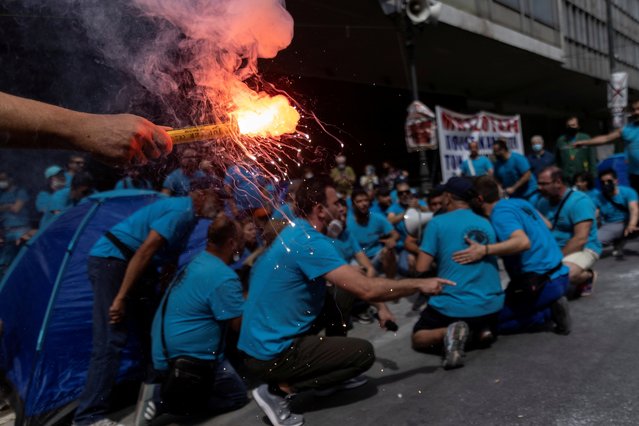 A man holds a flare as workers of a fertiliser company shout slogans during a demonstration against a planned labour bill, during a 24-hour strike in Athens, Greece, June 10, 2021. Widespread strikes in Greece brought public transport and other services to a halt Thursday, as the country's largest labor unions protested against employment reforms they argue will make flexible workplace changes introduced during the pandemic more permanent. (Photo by Alkis Konstantinidis/Reuters) 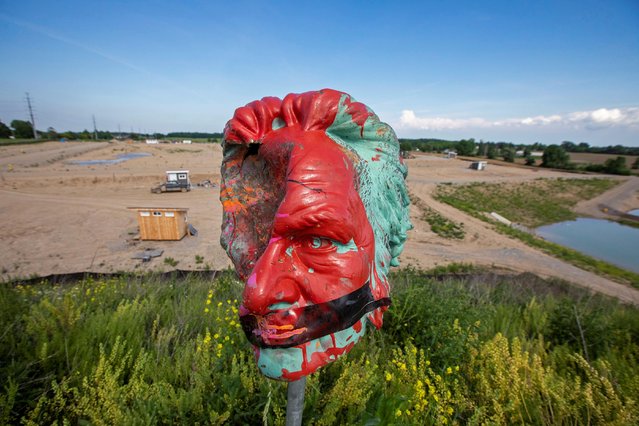 The head from a statue of Egerton Ryerson, considered one of the architects of Canada's residential school system, is seen after its removal, at 1492 Land Back Lane reclamation camp set up by Six Nations of the Grand River in Caledonia, Ontario, Canada on June 9, 2021. Protesters in Toronto tore down the statue of Ryerson, an educator and Methodist minister who was one of the architects of a system that had aimed to assimilate indigenous children so that they would lose their ties to their families and cultures. (Photo by Carlos Osorio/Reuters) A supporter of presidential candidate Pedro Castillo carries a puppet in Castillo's likeness during a march in Lima, Peru, Wednesday, June 9, 2021. Peruvians are still waiting to learn who will become their president next month as votes from Sunday's runoff election continued to be counted and the tiny difference between the two polarizing populist candidates narrowed. (Photo by Martin Mejia/AP Photo) 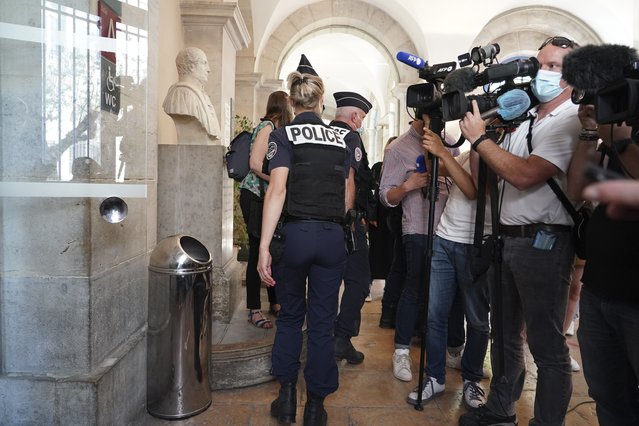 Police officers leave the courtroom as the man who slapped French President Emmanuel Macron is tried, Thursday, June 10, 2021 in Valence, central France. The 28-year-old Frenchman who described himself as a right-wing or extreme-right “patriot” was sentenced to four months in prison Thursday for slapping President Emmanuel Macron in the face. (Photo by Laurent Cirpriani/AP Photo) 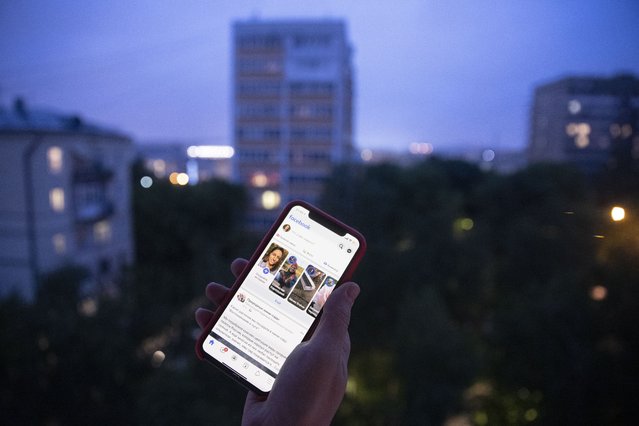 A user holds a smartphone with an opened Facebook page in Moscow, Russia, Thursday, June 10, 2021. Russian authorities have ordered Facebook and messaging app Telegram to pay steep fines for failing to remove banned content. The move could be part of growing Russian efforts to tighten control over social media platforms. A Moscow court fined Facebook a total of 17 million rubles (roughly $236,000) and Telegram 10 million rubles ($139,000). (Photo by Pavel Golovkin/AP Photo) 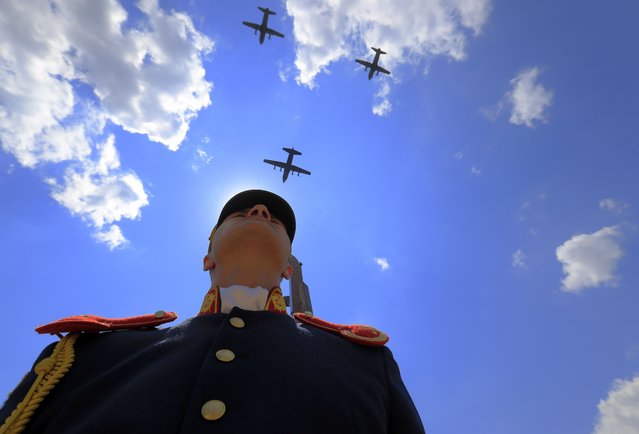 A Romanian honor guard soldier stands still as three military aircraft carriers are crossing the sky during a ceremony held at the Unknown Soldier Memorial, in Carol I Park, on the occasion of the Heroes' Day commemoration, in Bucharest, Romania, 10 June 2021. (Photo by Robert Ghement/EPA/EFE) 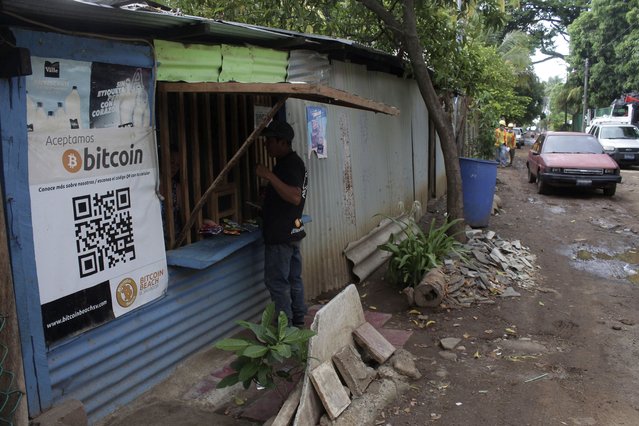 Santos Hilario Galvez, a Salvadoran who works as a builder at the Hope House, an organization that sponsors the use of cryptocurrencies in El Zonte beach, makes a purchase at a small store that accepts Bitcoin, in Tamanique, El Salvador, Wednesday, June 9, 2021. El Salvador's Legislative Assembly has approved legislation making the cryptocurrency Bitcoin legal tender in the country, the first nation to do so, just days after President Nayib Bukele made the proposal at a Bitcoin conference. (Photo by Salvador Melendez/AP Photo) 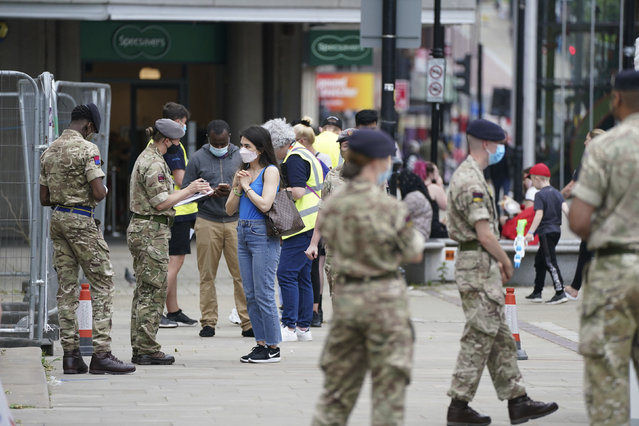 Members of the Armed Forces speak to people, outside a mobile COVID-19 vaccination centre outside Bolton Town Hall, in Bolton, England, Wednesday, June 9, 2021, where case numbers of the Delta variant first identified in India have been relatively high. (Photo by Peter Byrne/PA Wire via AP Photo) 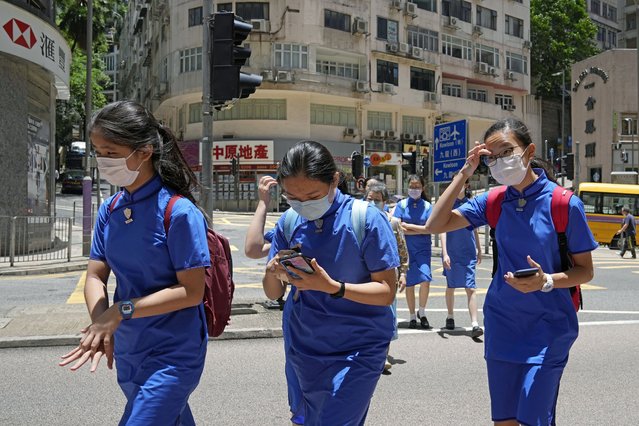 Students wearing face masks to prevent the spread of coronavirus, walk across a street in Hong Kong, Thursday, June 10, 2021. Government officials said Thursday that they will expand the vaccination drive to about 240,000 children from 12 to 15 years old starting Friday, joining other countries such as Singapore and the U.S. that have started vaccinating children. (Photo by Kin Cheung/AP Photo) Residents sit in observation after getting shots of the AstraZeneca vaccine for COVID-19 at Mega Mall on the outskirts of Panama City, Wednesday, June 9, 2021. (Photo by Arnulfo Franco/AP Photo) 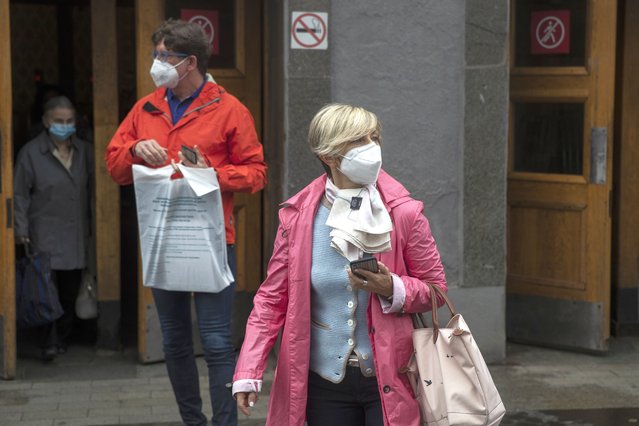 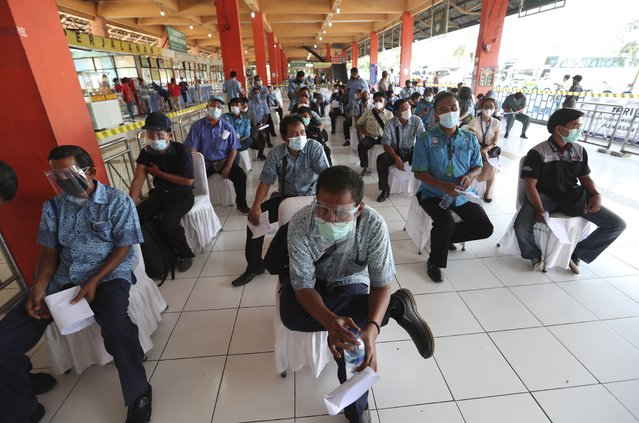 Transportation workers wear face masks and shields to help curb the spread of the coronavirus while waiting for the AstraZeneca vaccine during a mass vaccination campaign for public transport workers at the Kampung Rambutan Bus Terminal in Jakarta, Indonesia, Thursday, June 10, 2021. (Photo by Achmad Ibrahim/AP Photo) 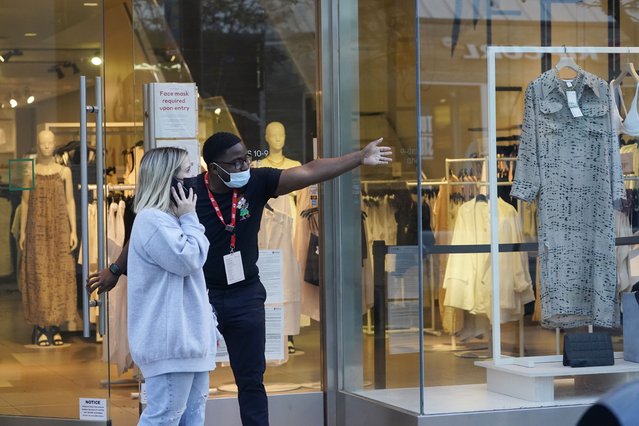 A salesperson gives directions to a shopper amid the COVID-19 pandemic on The Promenade Wednesday, June 9, 2021, in Santa Monica, Calif. (Photo by Marcio Jose Sanchez/AP Photo) 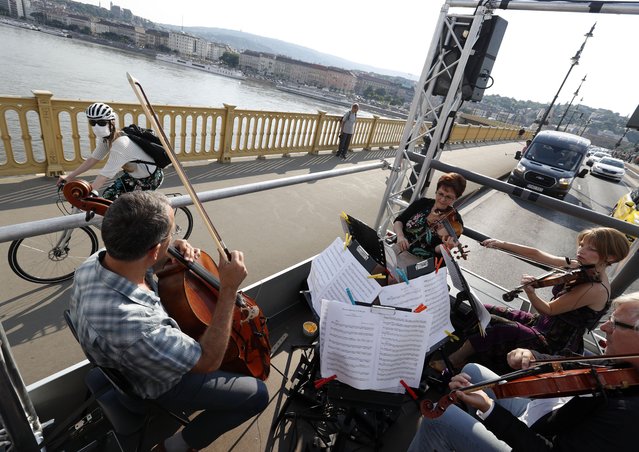 Members of the Budapest Festival Orchestra play music on the back of a truck while driving through downtown Budapest, Hungary, Wednesday June 9, 2021. The prestigious orchestra, founded and led by renowned composer Ivan Fischer, took to the streets as five members of the orchestra performed classical music to motorists and passers-by. The musical parade was aimed at encouraging Hungarians to start returning to live performances in concert halls as the pandemic wanes, after more than a year in which people were homebound and forced to take in their culture online. (Photo by Laszlo Balogh/AP Photo) 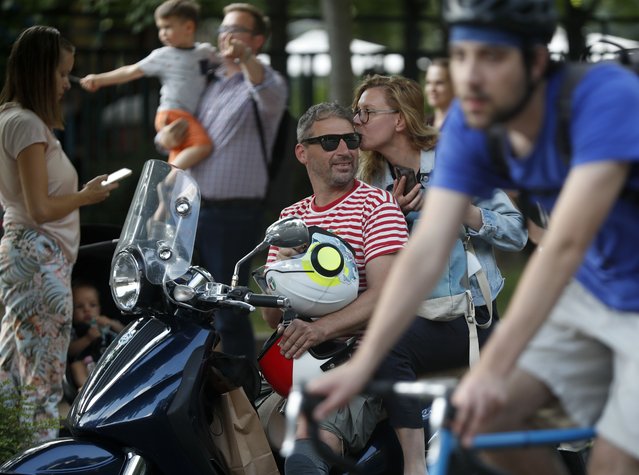 People listen as members of the Budapest Festival Orchestra play music on the back of a truck while driving through downtown Budapest, Hungary, Wednesday June 9, 2021. (Photo by Laszlo Balogh/AP Photo) 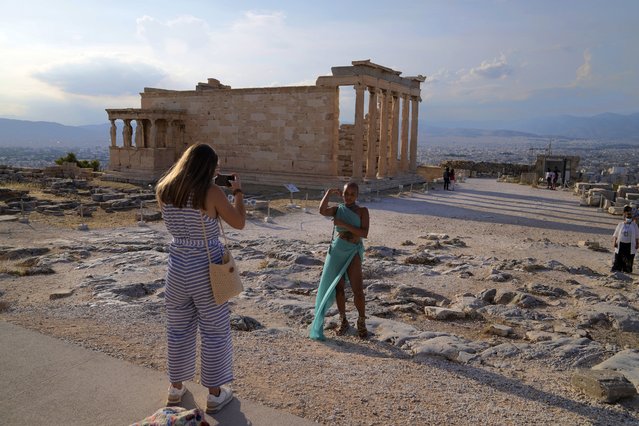 In this Tuesday, June 8, 2021 file photo, a tourist take photos at the Parthenon temple during a media tour for the Foreign Correspondents organised by the Greek Cultural Ministry at the Acropolis hill in Athens. Europe is opening up to Americans and other visitors after more than a year of COVID-induced restrictions. European governments hope to lure back tourists – and their dollars – back to the continent’s trattorias, vistas and cultural treasures. (Photo by Thanassis Stavrakis/AP Photo/File) 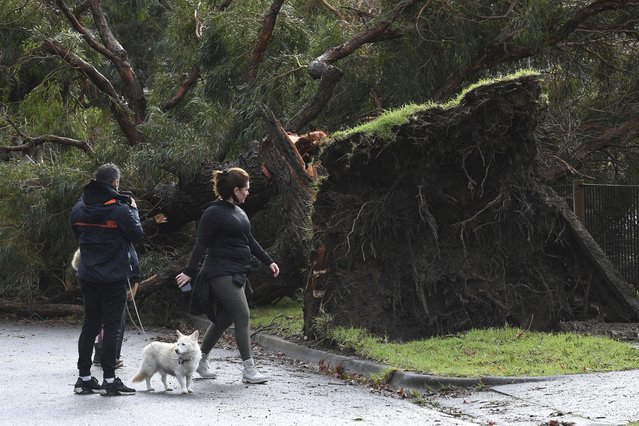 Residents look at a downed tree following storm damage in Lilydale, Melbourne, Australia, Thursday, June 10, 2021. Wild weather has toppled trees which have trapped people in cars and homes in Australia's southeast. More than 200,000 homes have been left without power as many brace for flooding (Photo by James Ross/AAP Image via AP Photo) 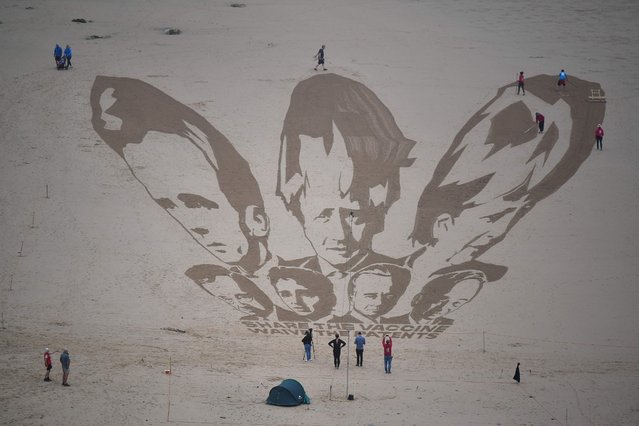 Activists put the finishing touches to a sand drawing of the G7 leaders and calling on them to 'share the vaccine and waive the patents' on Watergate Bay beach near Newquay, Cornwall on June 10, 2021, ahead of the three-day G7 summit being held from 11-13 June. G7 leaders from Canada, France, Germany, Italy, Japan, the UK and the United States meet this weekend for the first time in nearly two years, for the three-day talks in Carbis Bay, Cornwall. (Photo by Ben Stansall/AFP Photo) 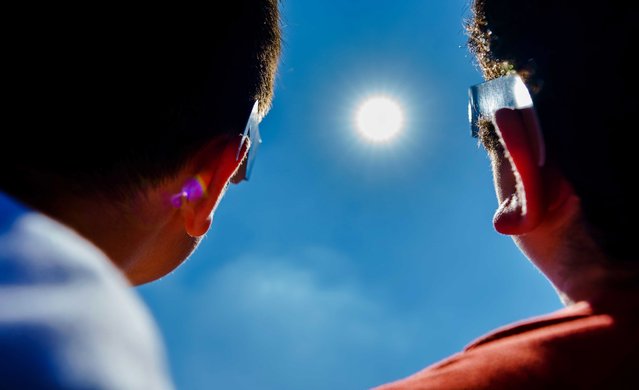 Pupils of primary school IBS Ababil, look at the solar eclipse with special glasses, in Schiedam, The Netherlands, 10 June 2021. For the first time since 2015, a partial solar eclipse can be seen again, with the sun partly obscured by the moon. (Photo by Marco de Swart/EPA/EFE) 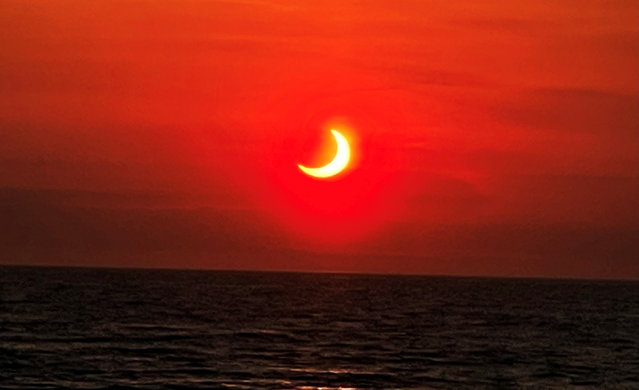 Partial solar eclipse is seen above the horizon in Avon-by-the-Sea, New Jersey, U.S., June 10, 2021 in this picture obtained from a social media. (Photo by Collin Gross via RReuters) 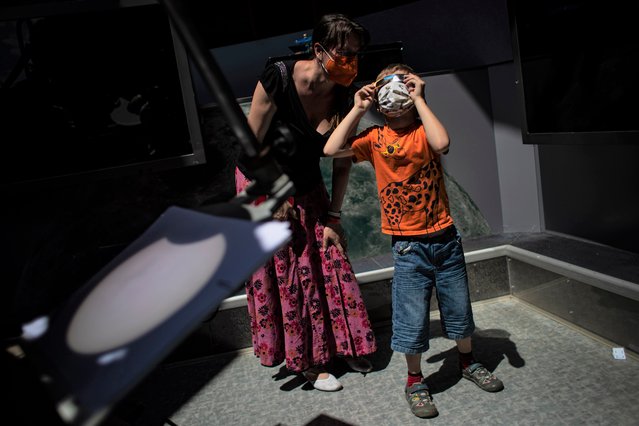 A woman with child observes the partial solar eclipse with special glasses as projection of eclipse from telescope is seen in front, at observatory in Prague, Czech Republic, 10 June 2021. A partial solar eclipse occurs when a portion of the Earth is engulfed by the shadow (penumbera) cast by the Moon as it passes between our planet and the Sun in an imperfect alignment. (Photo by Martin Divísek/EPA/EFE) 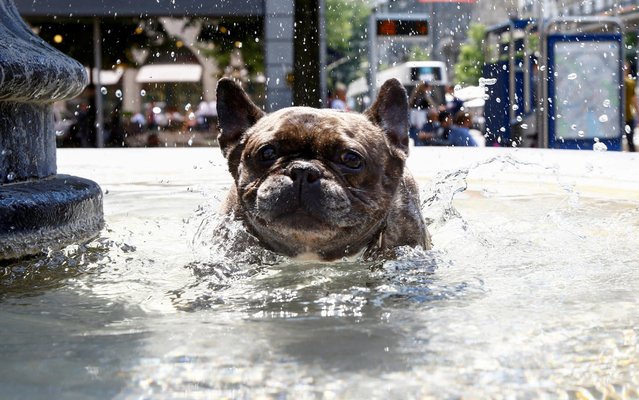