A man rides his bicycle between two destroyed military trucks in the city of Lysychansk, eastern Ukrainian region of Donbas, on June 11, 2022. (Photo by Aris Messinis/AFP Photo) 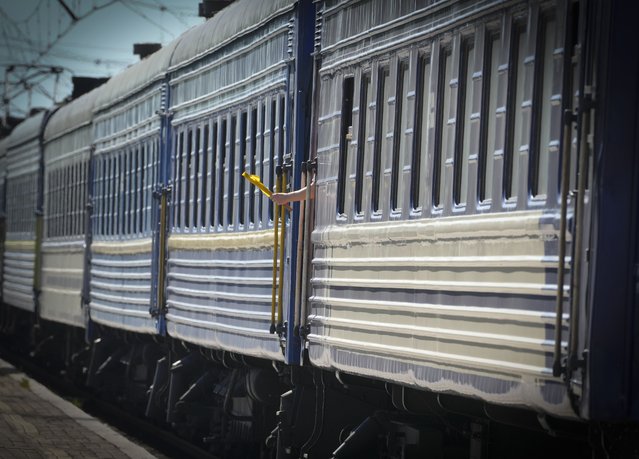 A railway worker gives a sign for departure of an evacuation train, whose passengers were evacuated from the war-hit area, in Pokrovsk, eastern Ukraine, Saturday , June 11, 2022. (Photo by Efrem Lukatsky/AP Photo) 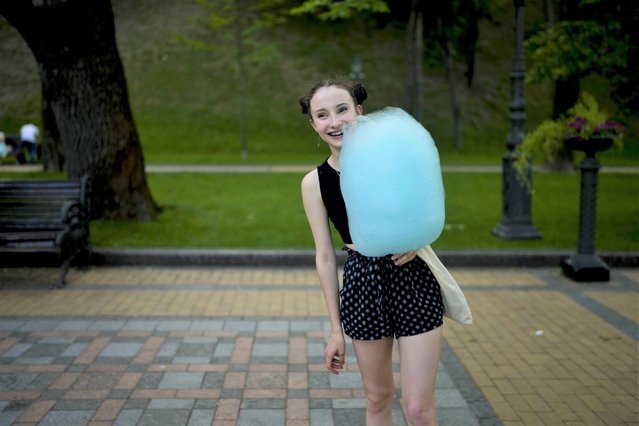 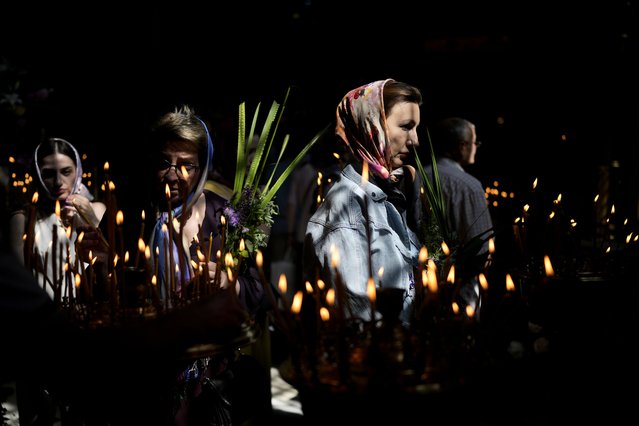 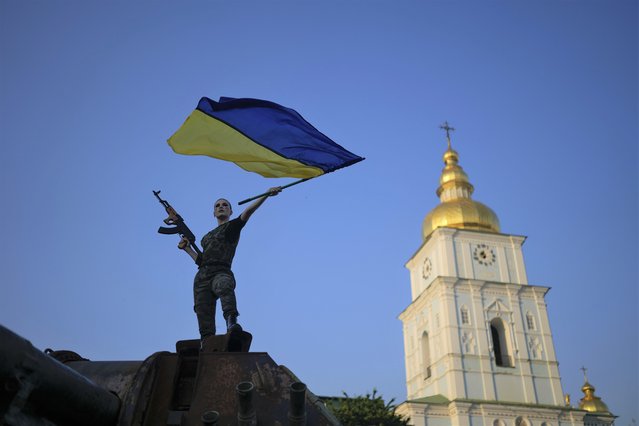 A woman brandishes the Ukrainian flag on top of a destroyed Russian tank in Kyiv, Ukraine, Friday, June 10, 2022. With war raging on fronts to the east and south, the summer of 2022 is proving bitter for the Ukrainian capital, Kyiv. The sun shines but sadness and grim determination reign. (Photo by Natacha Pisarenko/AP Photo) 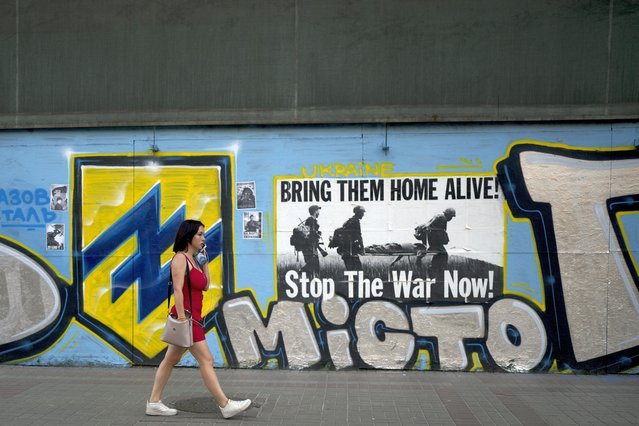 A woman walks in front of an anti-war poster in Kyiv, Ukraine, Friday, June 10, 2022. (Photo by Natacha Pisarenko/AP Photo) An unexploded shell of a multiple rocket launch system is seen stuck in the ground, as Russia's attack on Ukraine continues, in the town of Lysychansk, Luhansk region, Ukraine on June 10, 2022. (Photo by Oleksandr Ratushniak/Reuters) 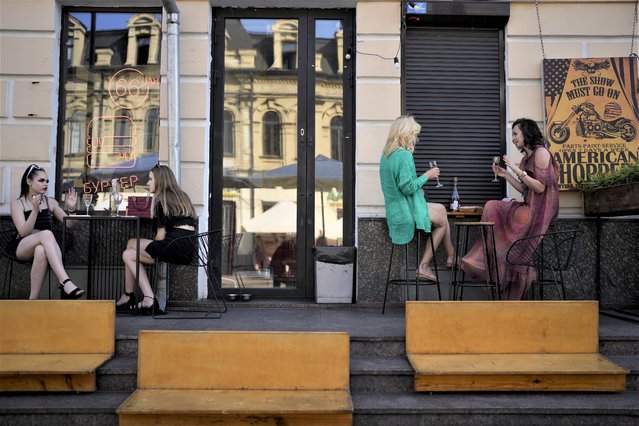 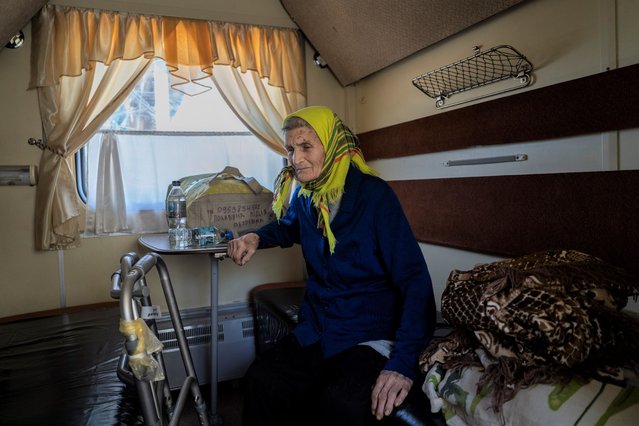 An elderly woman who has been evacuated from the Lysychansk area sit in an evacuation train in Pokrovsk in eastern Ukraine, Friday, June 10, 2022. (Photo by Bernat Armangue/AP Photo) 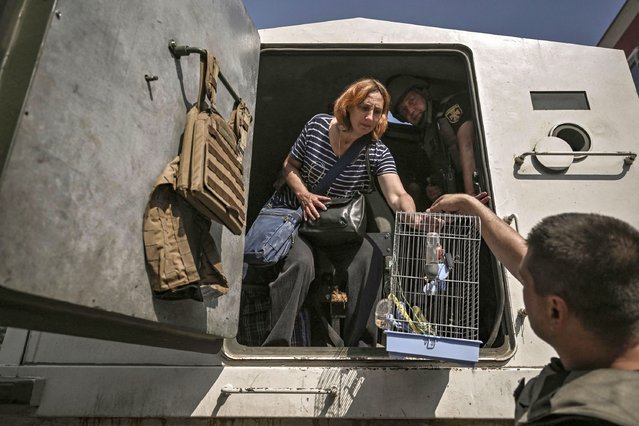 Civilians are evacuated from the city of Lysychansk, eastern Ukrainian region of Donbas, on June 11, 2022. (Photo by Aris Messinis/AFP Photo) 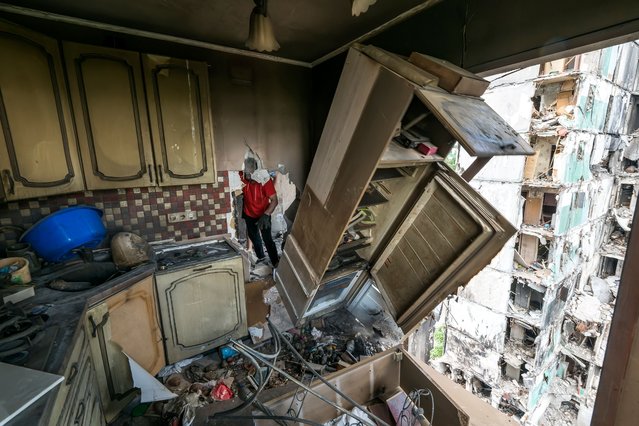 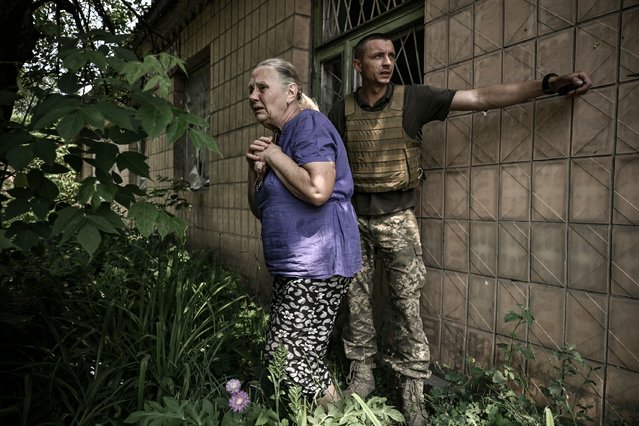 An elderly woman reacts as Ukrainian servicemen help her to take cover during an artillery duel between Ukrainian and Russian troops in the city of Lysychansk, eastern Ukrainian region of Donbas, on June 11, 2022. (Photo by Aris Messinis/AFP Photo) Ukrainian servicemen run for cover during an artillery duel between Ukrainian and Russian troops in the city of Lysychansk, eastern Ukrainian region of Donbas, on June 11, 2022. (Photo by Aris Messinis/AFP Photo) A tramway deport damaged by shellings in Kharkiv, Ukraine, 10 June 2022, amid the Russian invasion. Russian troops were recently pushed back by the Ukrainian army from the outskirts of the city and local residents try to organize a normal life after permanent shelling by Russian forces for the last three months. Russian troops entered Ukrainian territory on 24 February causing fighting and destruction and a humanitarian crisis. According to the UNHCR, more than 6.9 million refugees have fled Ukraine, and a further 7.7 million people have been displaced internally within Ukraine since. (Photo by Sergey Kozlov/EPA/EFE) 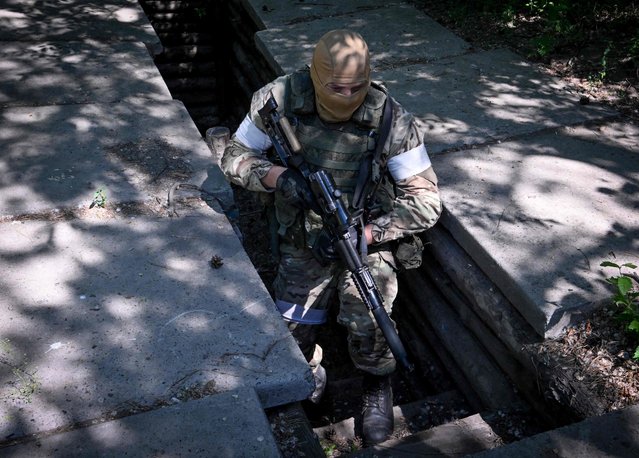 A Russian serviceman patrols the captured piont of defence of the Ukrainian army outside the town of Schast'ye on June 11, 2022, amid the ongoing Russian military action in Ukraine. (Photo by Yuri Kadobnov/AFP Photo) 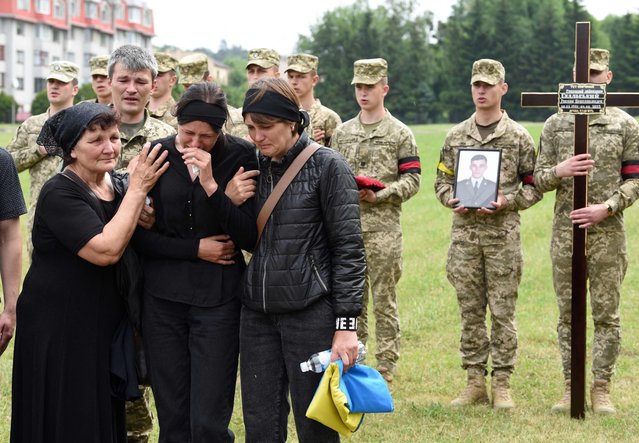 Mourners including relatives gather during the funeral ceremony of slain Ukrainian serviceman Ruslan Skalskyi at Lychakiv cemetery in the western Ukrainian city of Lviv, on June 11, 2022, amid the Russian invasion of Ukraine. (Photo by Yuriy Dyachyshyn/AFP Photo) 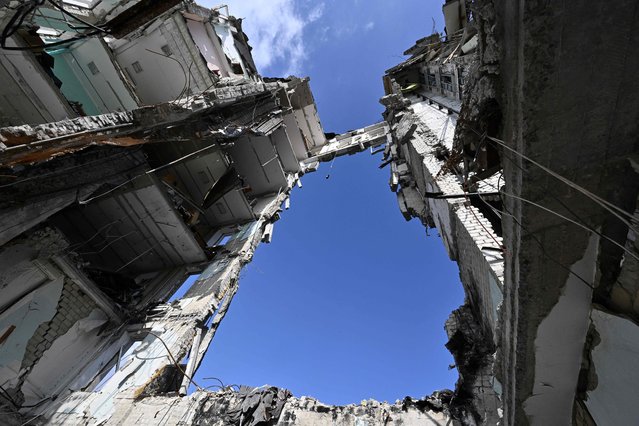 This photograph taken on June 10, 2022, shows the regional government building destroyed by a Russian missile strike in March 2022, in the southern Ukrainian city of Mykolaiv, amid the Russian invasion of Ukraine. (Photo by Genya Savilov/AFP Photo) 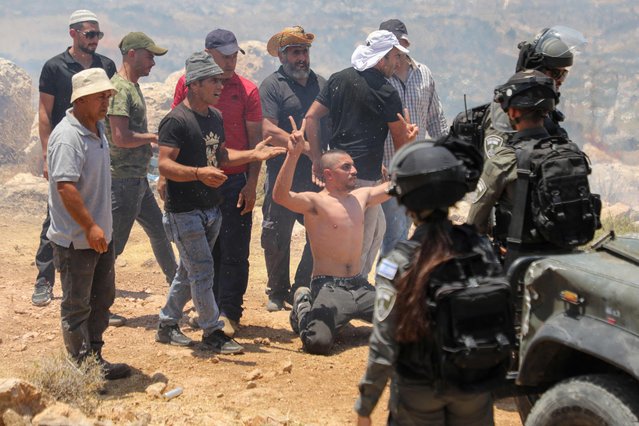 Palestinian demonstrators block the road in front of Israeli security forces during a demonstration against Israeli settlements in the village of Tarqumiya, northwest of Hebron in the occupied West Bank on June 11, 2022. (Photo by Mosab Shawer/AFP Photo) 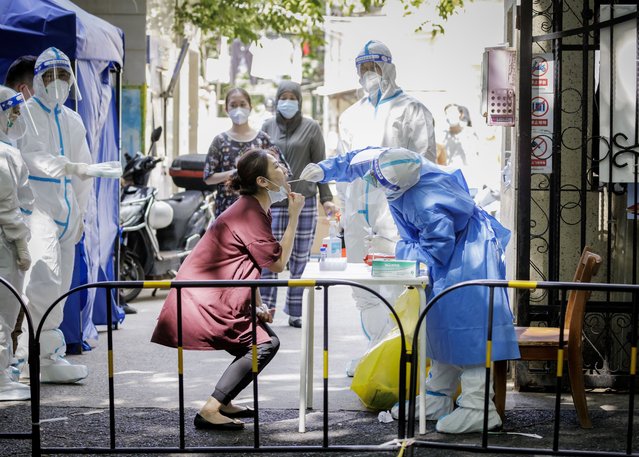 A woman in quarantine takes PCR Coronavirus test, amid new round of COVID-19 lockdowns and cases, in Shanghai, China, 11 June 2022. Shanghai starts weekend PCR screening to curb rising community COVID-19 cases. Only 10 days after the city lifted the 2-month lockdown in order to eliminate the community spread of COVID-19, residents of 15 out of 16 districts will need to participate in mandatory PCR testing this weekend. Shanghai city reported 7 locally transmitted COVID-19 cases and 9 local asymptomatic infections, according to the Shanghai Health Commission on 11 June 2022. (Photo by Alex Plavevski/EPA/EFE) People lineup to visit a newly opened fast food restaurant in a former McDonald's outlet in Bolshaya Bronnaya Street in Moscow, Russia, Sunday, June 12, 2022. The sign reads “The Name Changes, Love Remains”. The first of former McDonald's restaurants is reopened with new branding in Moscow. The corporation sold its branches in Russia to one of its local licensees after Russia sent tens of thousands of troops into Ukraine. (Photo by Dmitry Serebryakov/AP Photo) 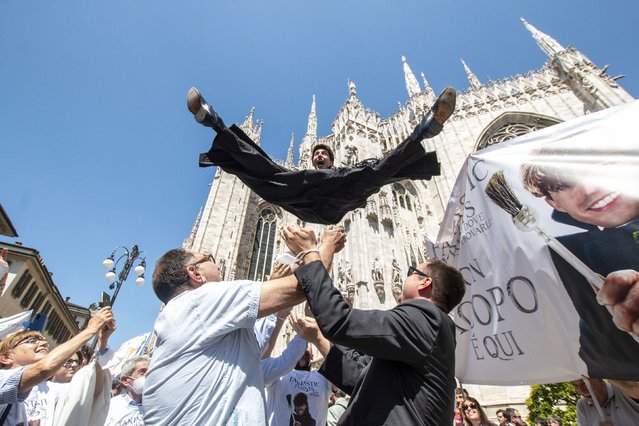 A newly ordained priest is thrown in the air in celebration in front of Milan's gothic cathedral, Italy, Saturday, June 11, 2022. (Photo by Ermes Beltrami/LaPresse via AP Photo) 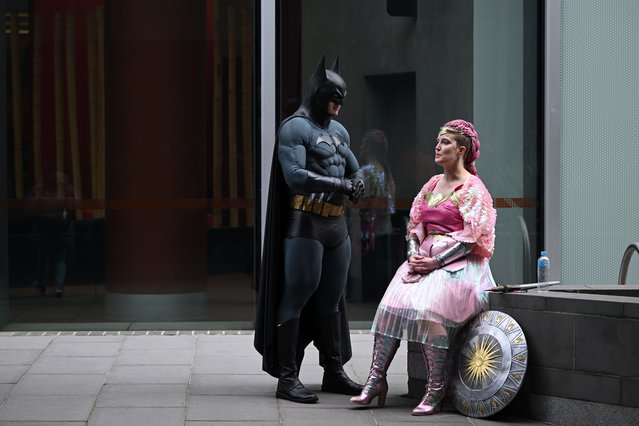 Cosplayers chat during the opening day of the OZ Comic-Con 2022 in Melbourne, Australia, 11 June 2022. The event runs through 12 June. (Photo by Joel Carrett/EPA/EFE) 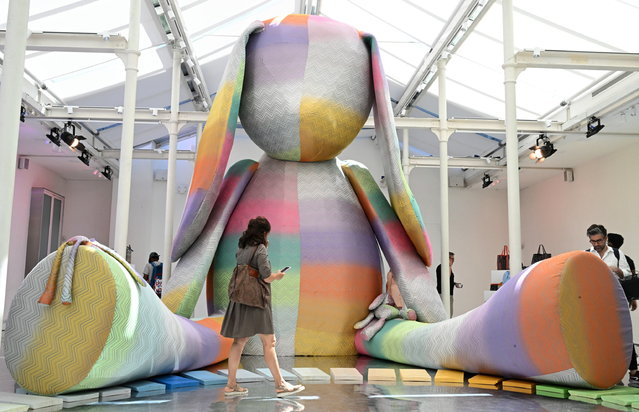 People look at exhibits as they visit the Missoni installation presented at the Fuori Salone Milan Design Week, in Milan, Italy, 10 June 2022. The Fuori Salone runs from 06 to 13 June. (Photo by Daniel Dal Zennaro/EPA/EFE) 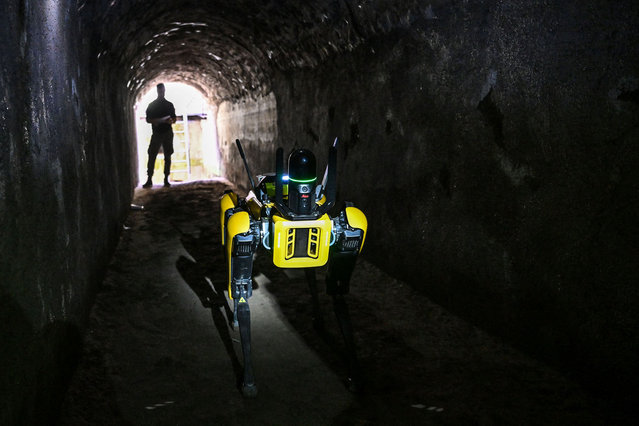 A technician (Rear) drives “Spot”, a quadruped robot developped by Boston Robotics, on June 9, 2022 as it is displayed inspecting a tunnel during a presentation to the media at the Archaeological Park of Pompeii, near Naples, southern Italy. Spot is one the latest monitoring operations of the archaeological structures, capable of inspecting the smallest of spaces in complete safety, gathering and recording data useful for the study and planning of interventions, to improve both the quality of monitoring of the existing areas, and to further our knowledge of the state of progress of the works in those areas undergoing recovery or restoration, and thereby to manage the safety of the site, as well as that of workers. (Photo by Andreas Solaro/AFP Photo) 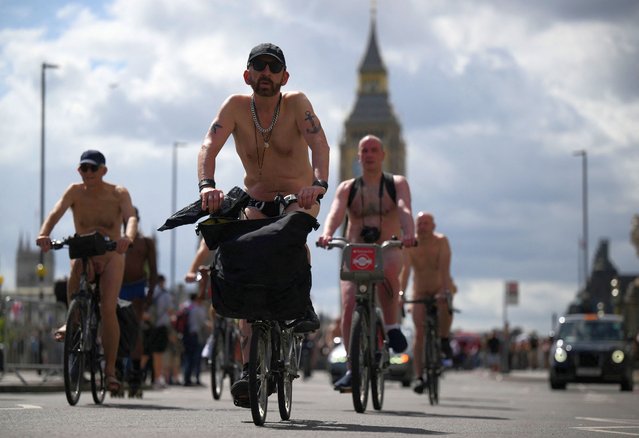 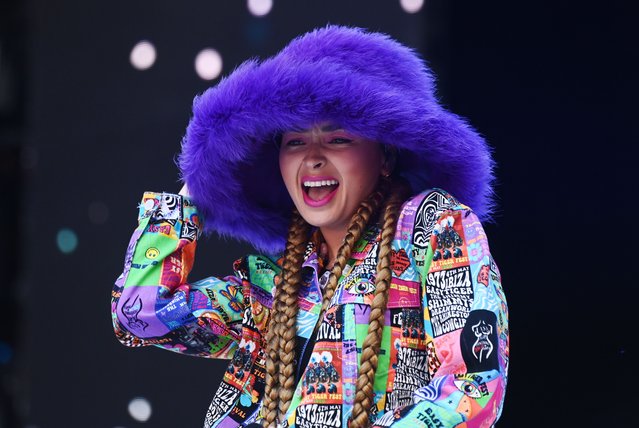