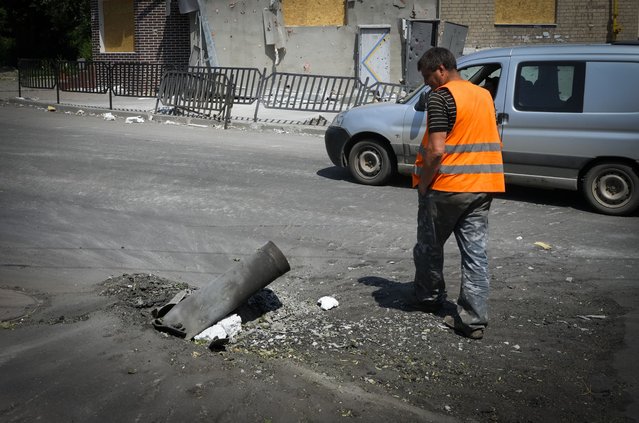 A municipal worker passes by a fragment of a Russian rocket following night shelling in the town of Bakhmut, Donetsk region, Ukraine, Monday, June 13, 2022. (Photo by Efrem Lukatsky/AP Photo) 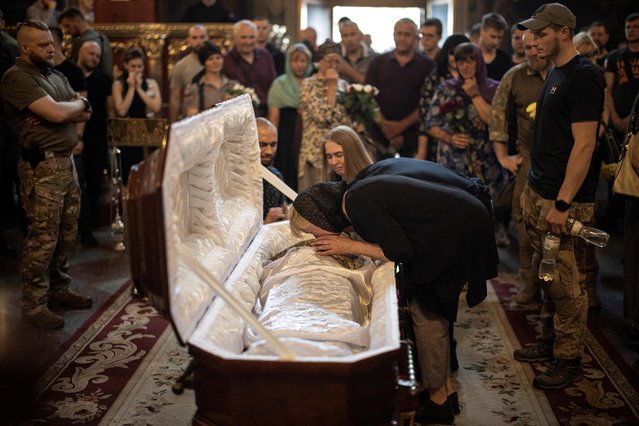 Family and friends attend a memorial service for Ukrainian serviceman Ivan Chekaniuk, who died during a combat mission in Sievierodonetsk, at St. Michael's Golden-Domed Cathedral in central Kyiv, Ukraine on June 11, 2022. (Photo by Marko Djurica/Reuters) 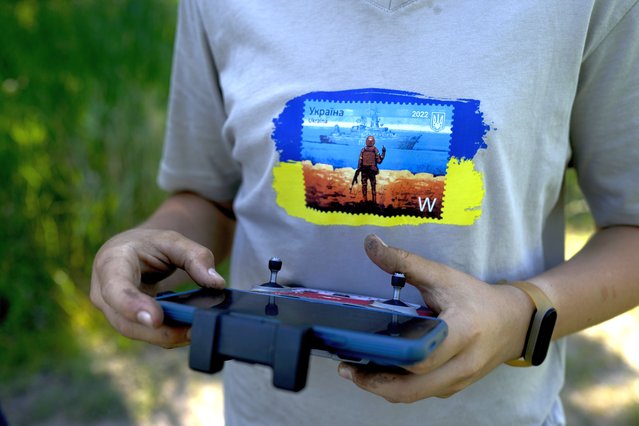 Andriy Pokrasa, 15, flies his drone during an interview with The Associated Press in Kyiv, Ukraine, Saturday, June 11, 2022. Andriy is being hailed in Ukraine for stealthy aerial reconnaissance work he has done with his dad in the ongoing war with Russia. They used their drone to help the country's military spot, locate and destroy Russian targets in the early days of the Russian invasion. (Photo by Natacha Pisarenko/AP Photo) 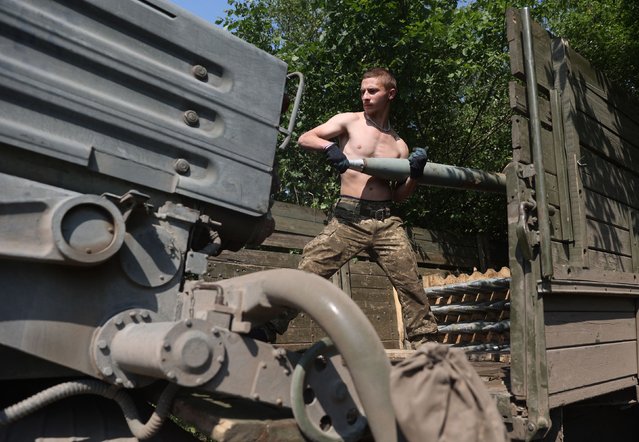 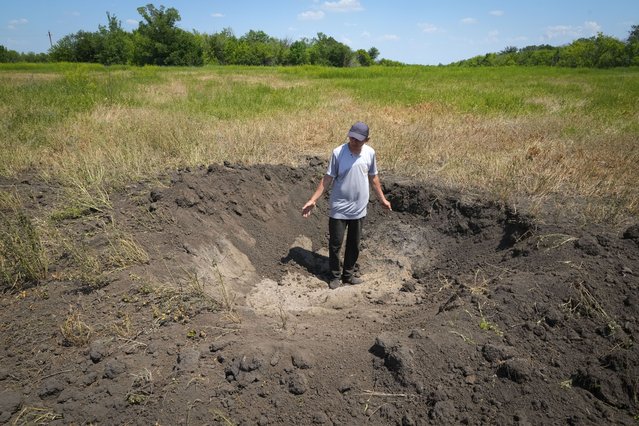 Farmer Serhiy, a local grain producer, shows a crater left by a Russian shell on his field in the village of Ptyche in eastern Donetsk region, Ukraine, Sunday, June 12, 2022. Serhiy claims he cannot sell his grains because nobody wants to come to the area which has been under Russian shelling. Ukraine is one of the world’s largest exporters of wheat and corn but Russia's invasion and a blockade of its ports have halted much of that flow. (Photo by Efrem Lukatsky/AP Photo) 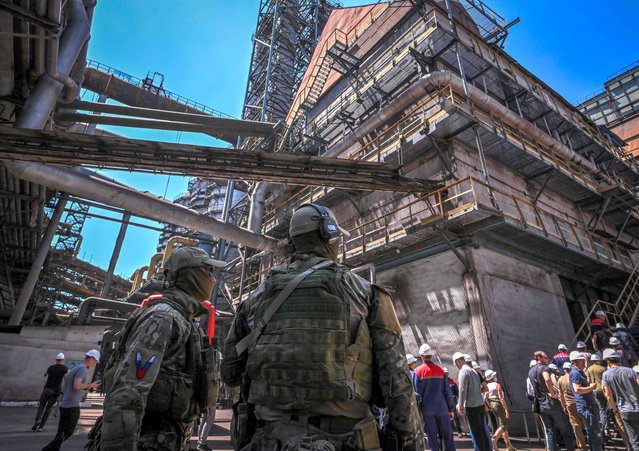 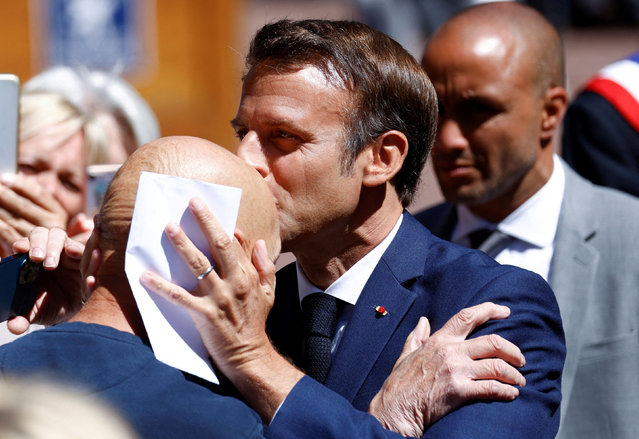 French President Emmanuel Macron kisses a person as he arrives to vote in the first round of French parliamentary elections, at a polling station in Le Touquet-Paris-Plage, France on June 12, 2022. (Photo by Yves Herman/Reuters) 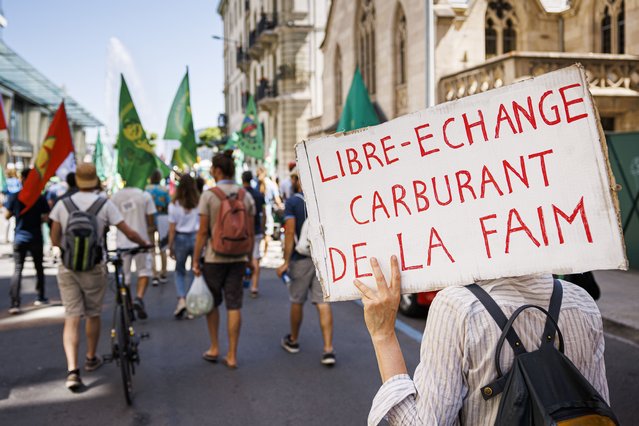 Protestors hold up banners during a demonstration against the World Trade Organization (WTO) in Geneva, Switzerland, Saturday, June 11, 2022. For the first time in 4 1/2 years, after a pandemic pause, government ministers from WTO countries will gather for four days starting Sunday. (Photo by Valentin Flauraud/Keystone via AP Photo) 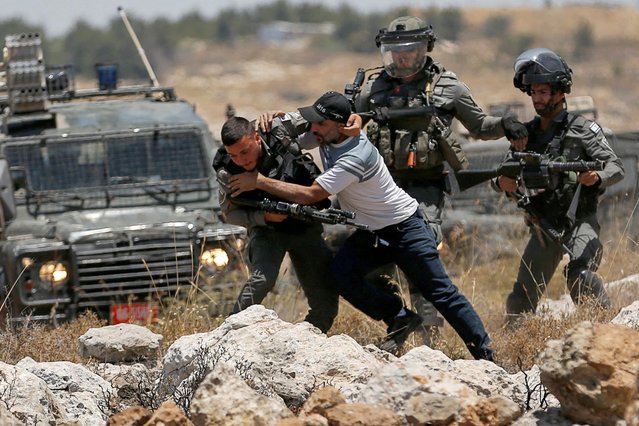 A Palestinian man scuffles with Israeli forces during a protest against Israeli settlement activity near Hebron in the Israeli-occupied West Bank on June 11, 2022. (Photo by Mussa Qawasma/Reuters) 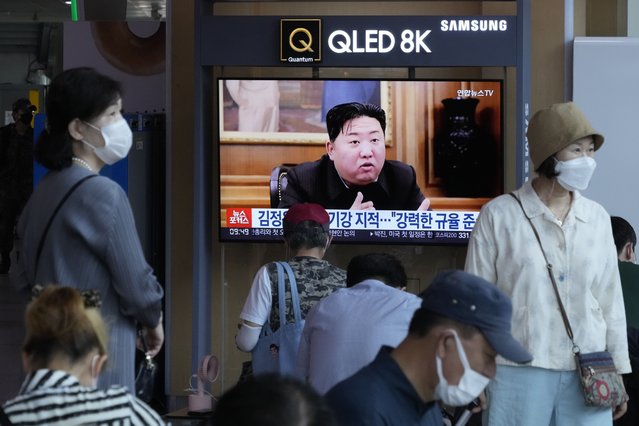 People watch a TV showing an image of North Korea leader Kim Jong Un during a news program at the Seoul Railway Station in Seoul, South Korea, Monday, June 13, 2022. Kim and his top deputies have pushed for a crackdown on officials who abuse their power and commit other “unsound and non-revolutionary acts”, state media reported Monday, as Kim seeks greater internal unity to overcome a COVID-19 outbreak and economic difficulties. (Photo by Ahn Young-joon/AP Photo) 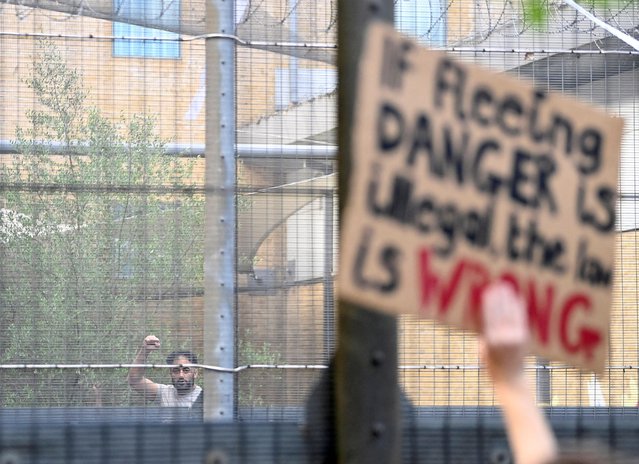 A detainee inside Brook House Immigration Removal Centre gestures as demonstrators protest outside of it against a planned deportation of asylum seekers from Britain to Rwanda, at Gatwick Airport near Crawley, Britain, June 12, 2022. (Photo by Toby Melville/Reuters) 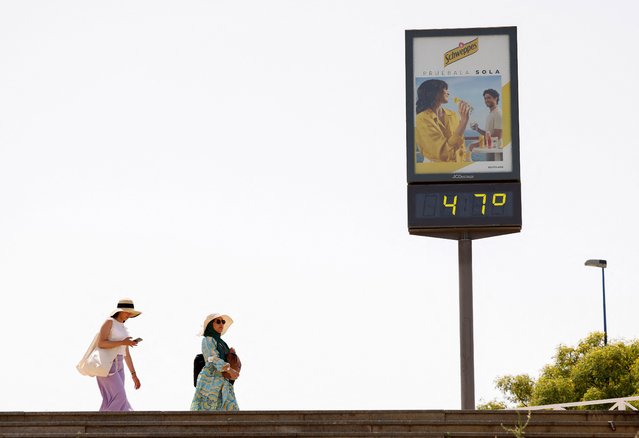 Women walk next to a thermometer displaying 47 Celsius degrees (116.6 Fahrenheit degrees) during the first heatwave of the year in Seville, Spain on June 11, 2022. (Photo by Marcelo del Pozo/Reuters) 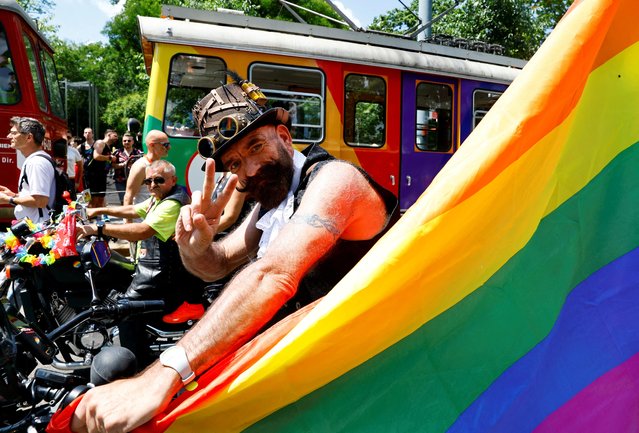 A man gestures during the annual Rainbow Parade, a Pride parade to support the rights of lesbian, gay, bisexual, transgender, intersex and queer (LGBTIQ) people in Vienna, Austria on June 11, 2022. (Photo by Lisa Leutner/Reuters) 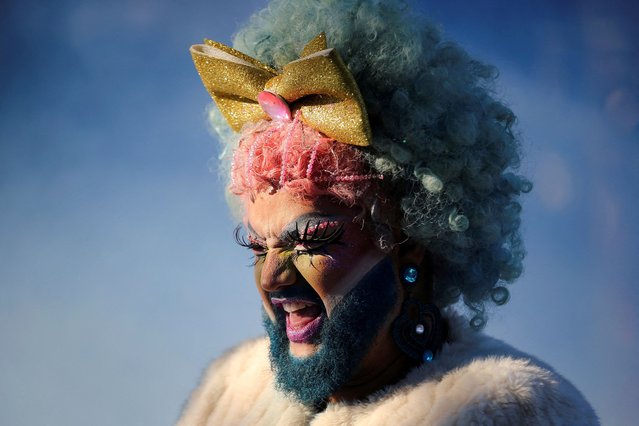 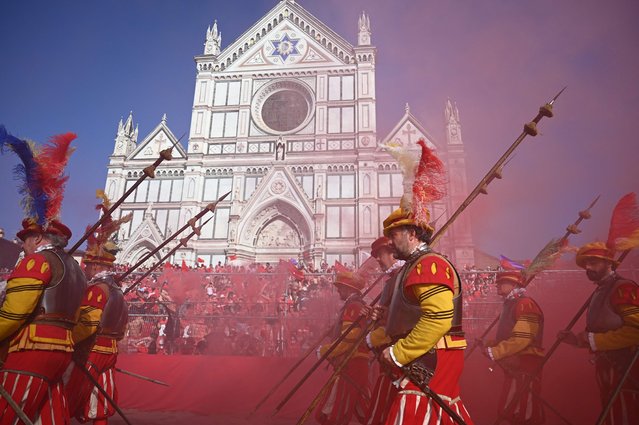 This photograph taken shows Florence's parade with traditional costumes prior to the Calcio Storico Fiorentino, a traditional 16th Century Renaissance ball game, at Piazza Santa Croce, in Florence on June 11, 2021. Calcio Fiorentino, an early form of football from the 16th century that originated from the ancient roman “harpastum”, is played in teams of 27, using both feet and hands and allows tactics such as head-butting, punching, elbowing, and choking, but forbids sucker-punching and kicks to the head. Goals can be scored by throwing the ball over a goal running the width of each end of the giant sand pit. (Photo by Vincenzo Pinto/AFP Photo) 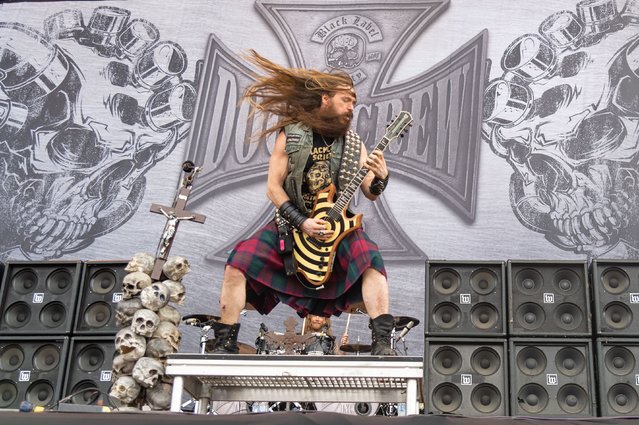 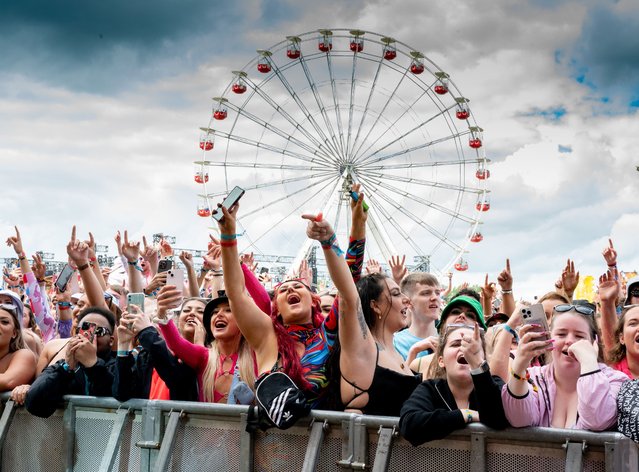 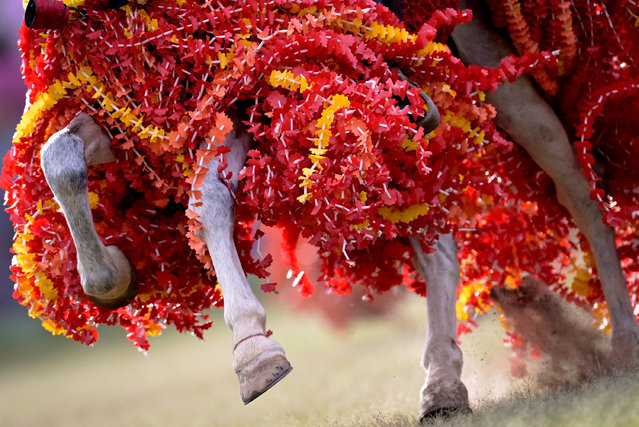 Horses are seen during Cavalhada, a traditional festival held in Mateus Leme city, southeastern of Minas Gerais state, Brazil on June 11, 2022. The Cavalhada by Mateus Leme is the reenactment of the struggle between Moors and Christians. (Photo by Douglas Magno/AFP Photo) 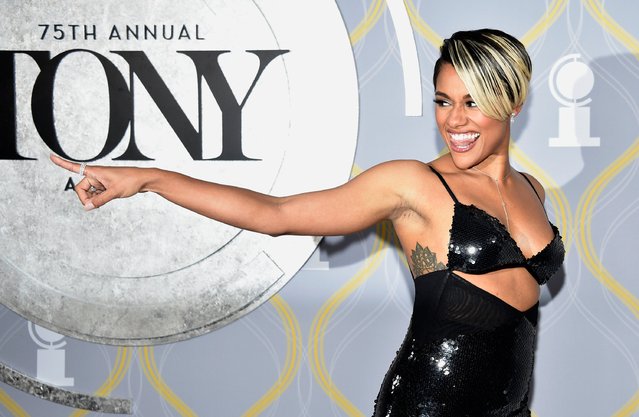 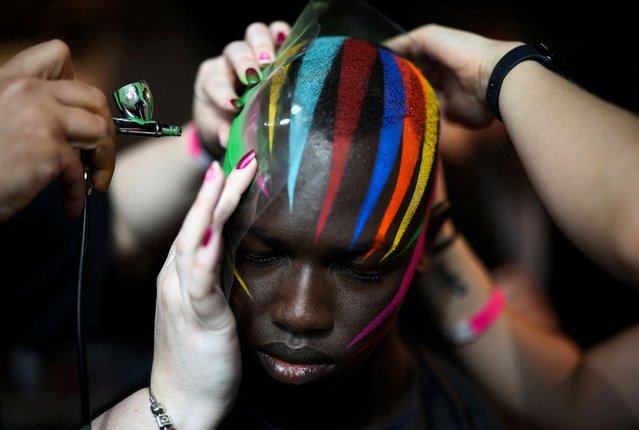