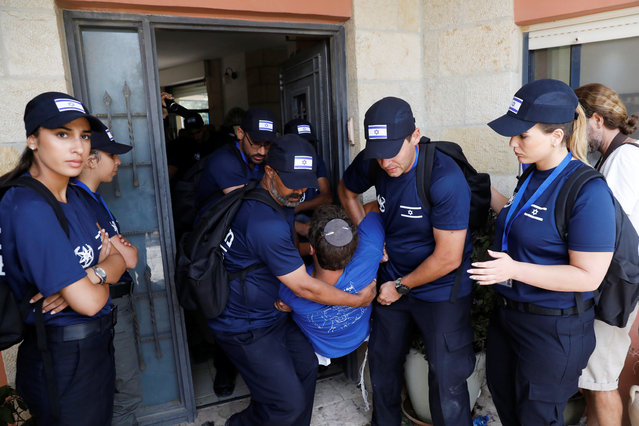 Israeli security forces carry a man out of a house during the evacuation of Jewish settler families from the illegal outpost of Netiv Ha'avot in the occupied West Bank on June 12, 2018. (Photo by Ronen Zvulun/Reuters) 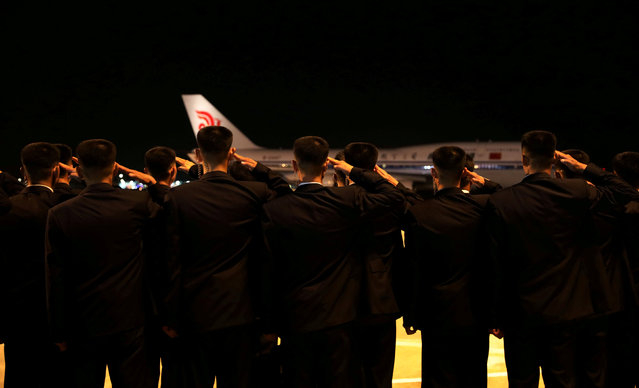 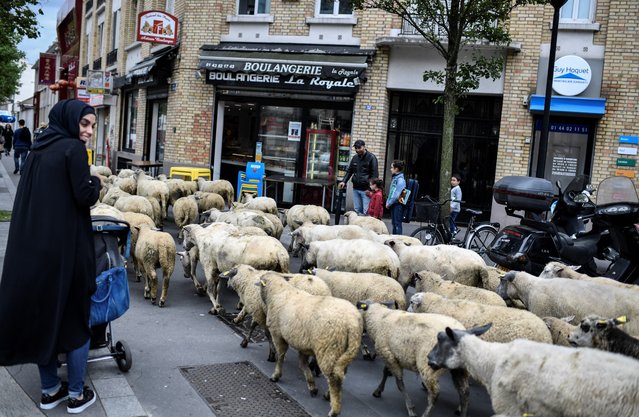 A herd of sheep walks past residents and shops in Aubervilliers, north of Paris, on June 13, 2018 as part of a cattle drive. (Photo by Stephane De Sakutin/AFP Photo) 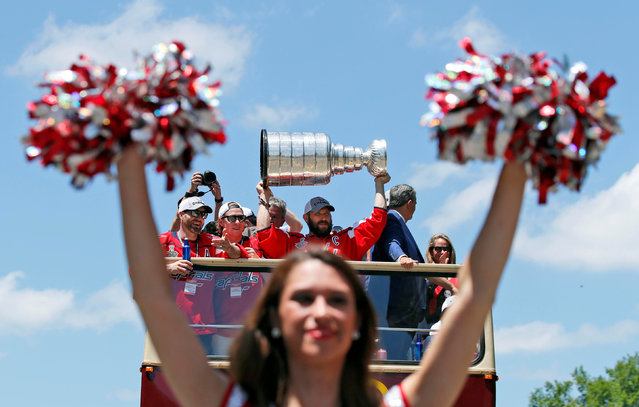 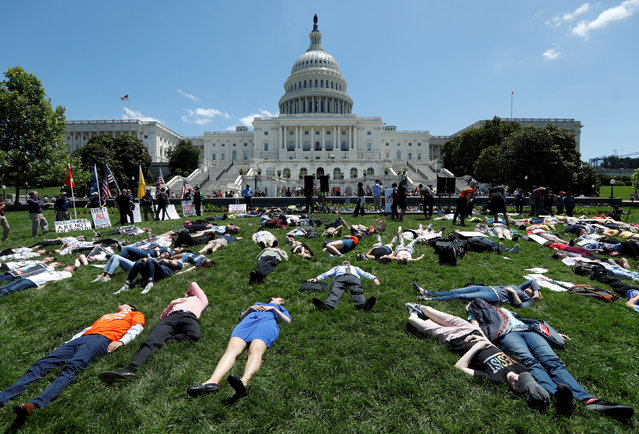 Activists mark the second anniversary of the Pulse Nightclub shooting where a gunman killed 49 people in Orlando with a die-in at the U.S. Capitol in Washington, U.S., June 12, 2018. (Photo by Kevin Lamarque/Reuters) 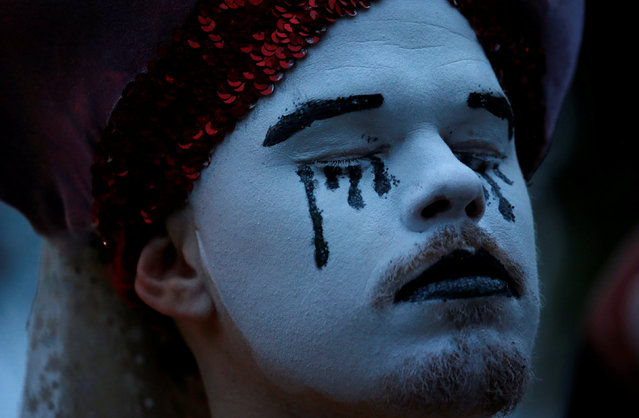 Sister Ray Dee O'Active of the D.C. chapter of the Sisters of Perpetual Indulgence closes her eyes as she takes part in a candlelight vigil to commemorate the two year anniversary of the Pulse nightclub shooting in Orlando at Dupont Circle in Washington, D.C., U.S., June 12, 2018. (Photo by Leah Millis/Reuters) 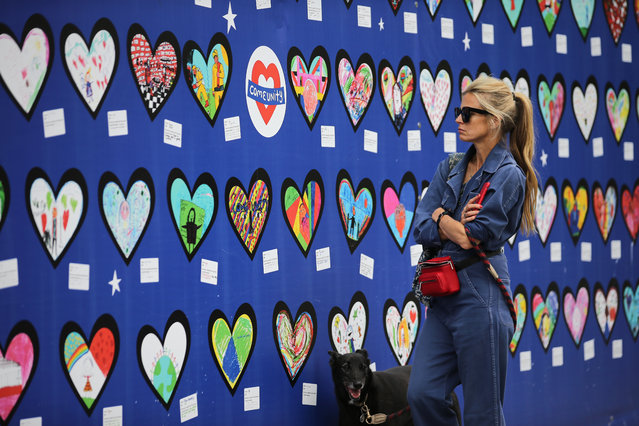 A woman looks at a wall of hearts with drawings and messages of support for the 71 people who died in the Grenfell fire, outside the Notting Hill Methodist Church in West London, on June 13, 2018. Commemorations begin on June 13, 2018, to honour the 71 people who died when a fire ripped through the Grenfell tower block in London one year ago. (Photo by Daniel Leal-Olivas/AFP Photo) 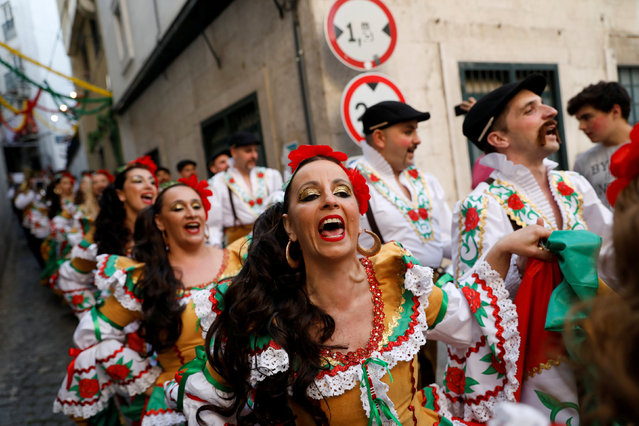 Members of Alfama's group walk down a street on their way to the Saint Anthony's Parade in Lisbon, Portugal June 12, 2018. (Photo by Rafael Marchante/Reuters) 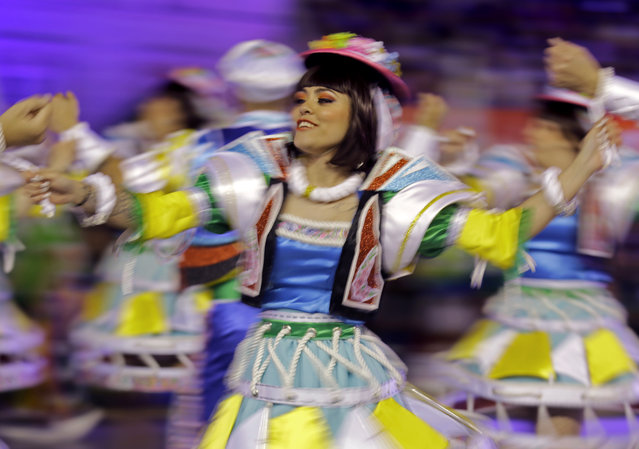 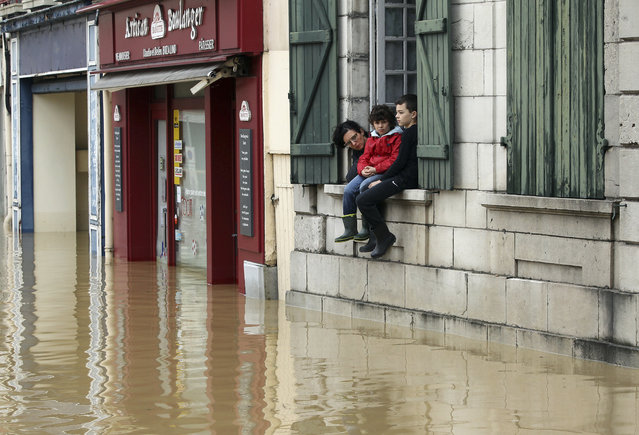 A mother and her children watch from their house the level of flooded water caused by heavy rain and thunder storms, in Salies-de-Bearn, southwestern France, Wednesday, June 13, 2018. (Photo by Bob Edme/AP Photo) 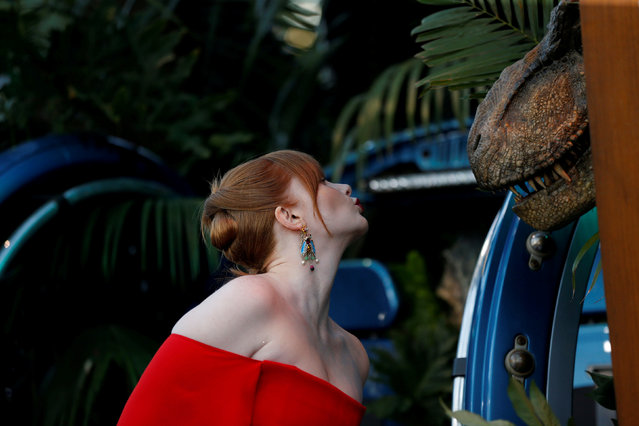 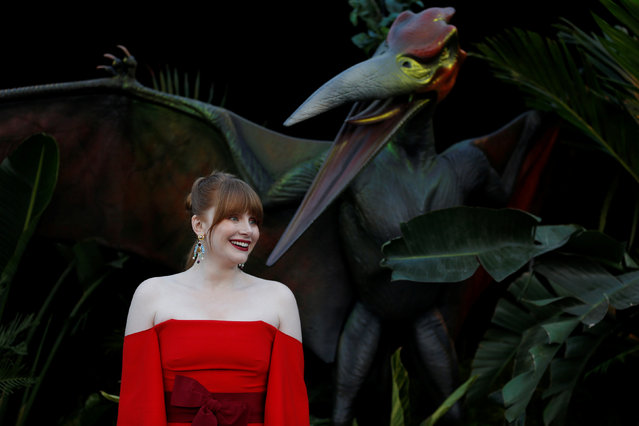 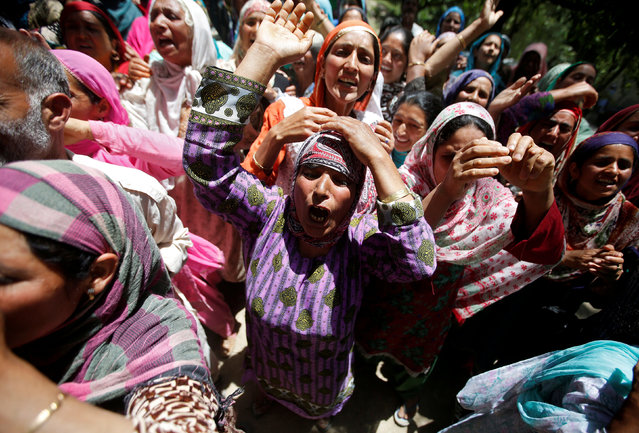 Relatives mourn as they watch the body of Ghulam Hassan Wagay, a policeman who according to local media was killed in a militant attack in south Kashmir’s Pulwama district on Monday night, during his funeral at Wohlutra village in north Kashmir's Baramulla district, June 12, 2018. (Photo by Danish Ismail/Reuters) 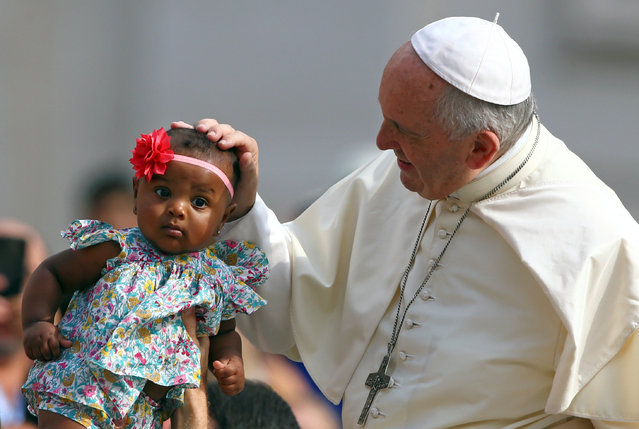 Pope Francis blesses a child as he arrives to lead the Wednesday general audience in Saint Peter's square at the Vatican, June 13, 2018. (Photo by Tony Gentile/Reuters) 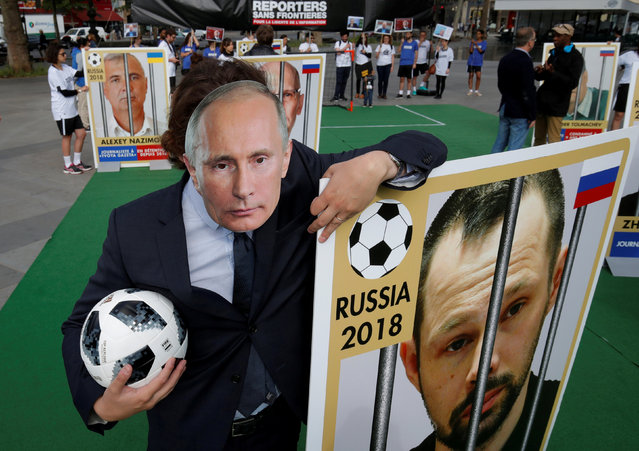 A Reporter Without Borders (RSF) activist, wearing a mask depicting Russian President Vladimir Putin, stands next to a giant portrait of journalist Alexei Kungurov on Place de la Republique, transformed into a soccer field to denounce abuse of press freedom in Russia before the start of the 2018 FIFA World Cup Russia, in Paris, France, June 13, 2018. (Photo by Philippe Wojazer/Reuters) 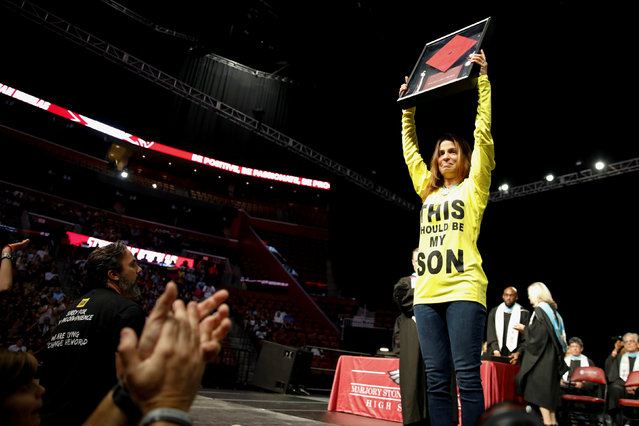 Patricia Padauy, the mother of Joaquin Oliver, one of the victims of the mass shooting at Marjory Stoneman Douglas High School, holds up her son's diploma during his graduation ceremony in Sunrise, Florida, U.S., June 3, 2018. (Photo by Carlos Garcia Rawlins/Reuters) 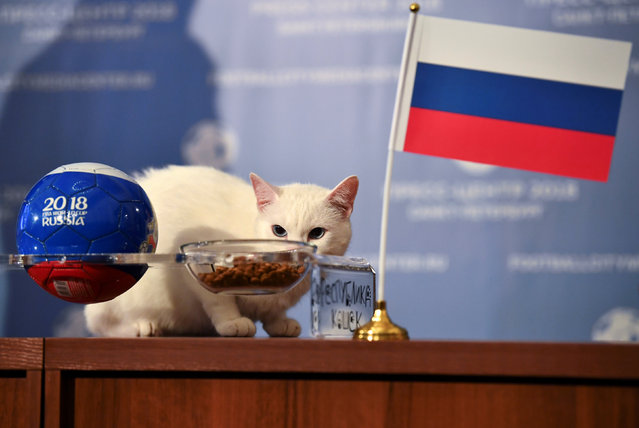 Achilles the cat, one of the State Hermitage Museum mice hunters, attempts to predict the result of the opening match of the 2018 FIFA World Cup between Russia and Saudi Arabia during an event in Saint Petersburg, Russia June 13, 2018. (Photo by Dylan Martinez/Reuters) 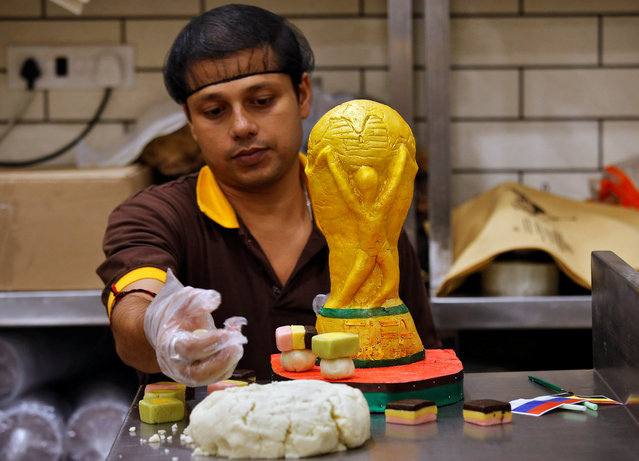 A worker makes a replica of FIFA World Cup 2018 trophy made from sweets at a confectionery workshop in Kolkata, ahead of the FIFA World Cup, in Kolkata, India June 12, 2018. (Photo by Rupak De Chowdhuri/Reuters) 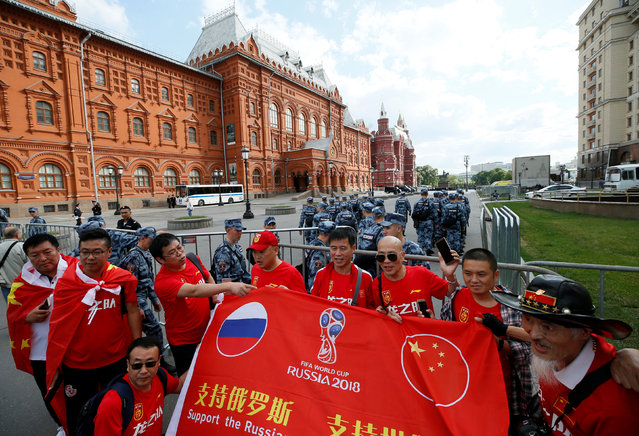 Chinese tourists pose for a picture near barriers, erected by officers of the Russian National Guard, on the eve of the 2018 FIFA World Cup in central Moscow, Russia June 13, 2018. (Photo by Gleb Garanich/Reuters) 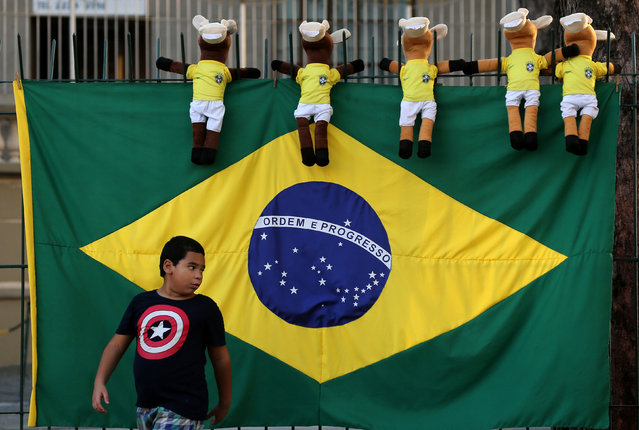 A Brazilian flag and dolls for sale are seen as a boy walks ahead of the 2018 World Cup, in Rio de Janeiro, Brazil June 13, 2018. (Photo by Sergio Moraes/Reuters) 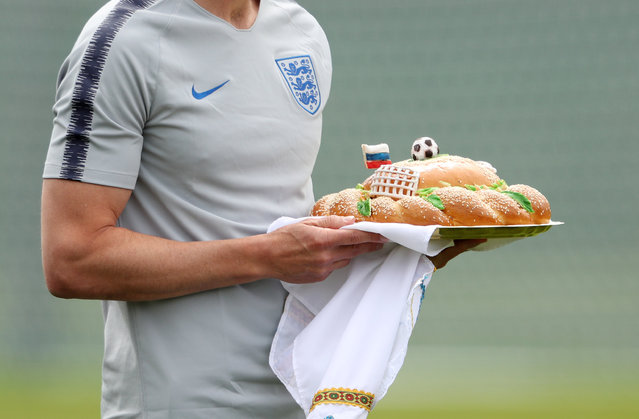 The England manager, Gareth Southgate, carries a welcome gift before a pre-World Cup training session at the Spartak stadium in Zelenogorsk near Saint Petersburg, Russia on June 13, 2018. (Photo by Lee Smith/Reuters) 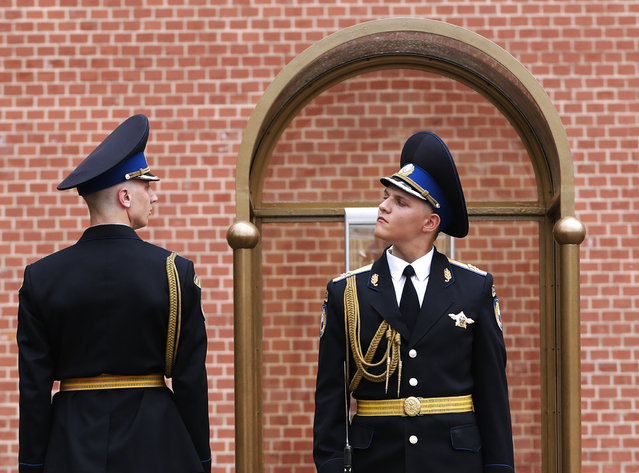 Russian Kremlin honor guards during a change of guards outside the Kremlin walls, Moscow, Russia, 12 June 2018. The FIFA World Cup 2018 will take place in Russia from 14 June to 15 July 2018. (Photo by Rungroj Yongrit/EPA/EFE) 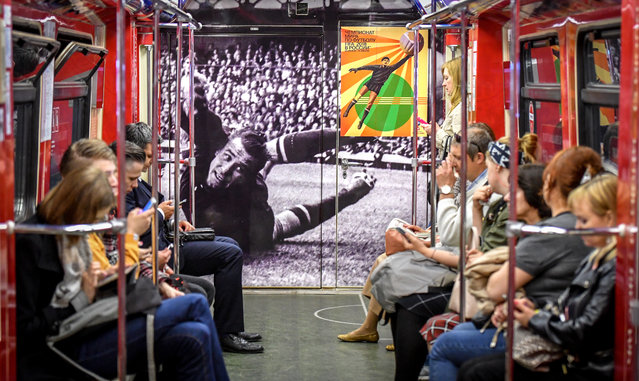 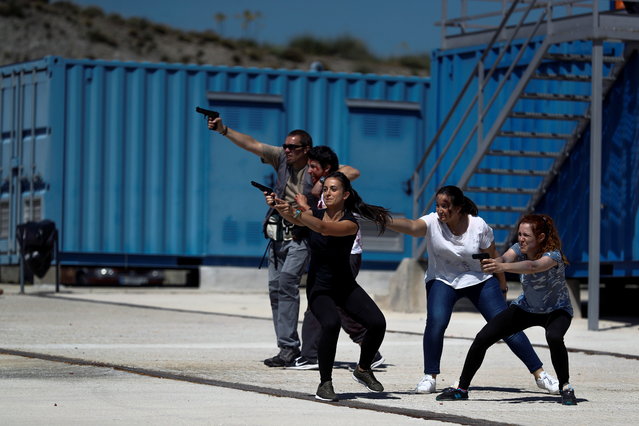 Several people take part in an anti-terrorist and emergency drill in Rivas-Vaciamadrid, outside Madrid, Spain, 13 June 2018. More than 300 people participated in the drill. (Photo by Emilio Naranjo/EPA/EFE) 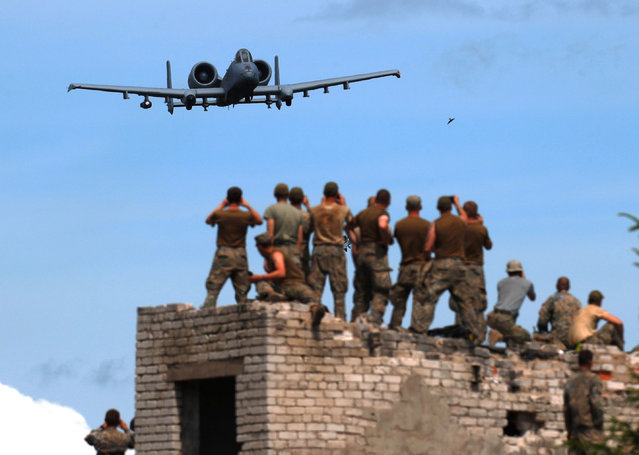