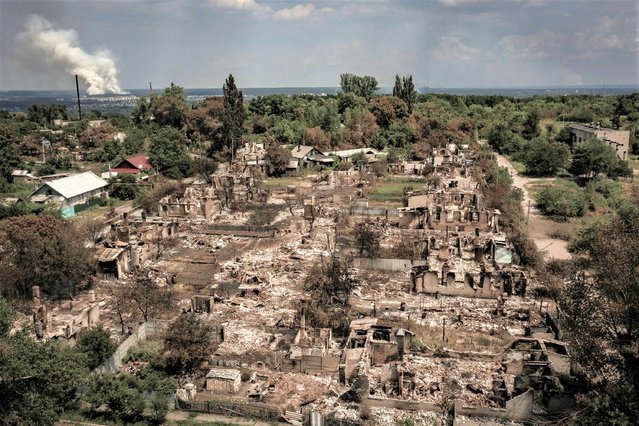 An aerial view shows destroyed houses after strike in the town of Pryvillya at the eastern Ukrainian region of Donbas on June 14, 2022, amid Russian invasion of Ukraine. The cities of Severodonetsk and Lysychansk, which are separated by a river, have been targeted for weeks as the last areas still under Ukrainian control in the eastern Lugansk region. (Photo by Aris Messinis/AFP Photo) 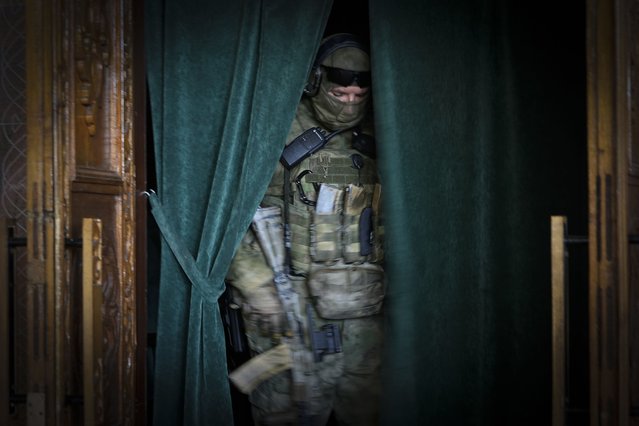 A Russian soldier in the hall of the Philharmonic, on Sunday, June 12, 2022, in Mariupol, in territory controlled by the government of the Donetsk People's Republic, in eastern Ukraine. (Photo by AP Photo/Stringer) 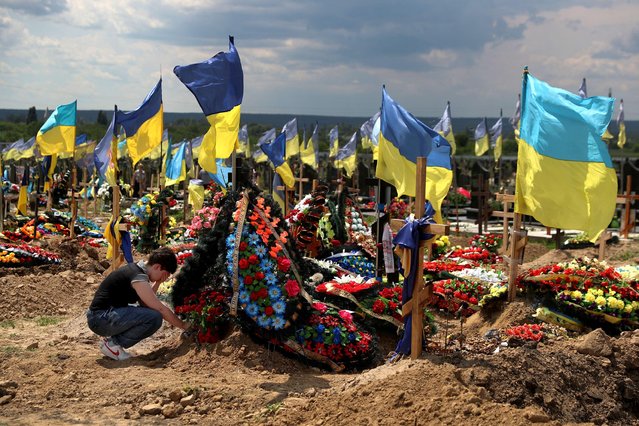 A woman reacts next to a grave of Evgeny Khrapko, a combat medic and instructor of tactical medicine who was killed in a mission, amid Russia's attack on Ukraine, after his farewell ceremony in Kharkiv, Ukraine June 14, 2022. (Photo by Ivan Alvarado/Reuters) 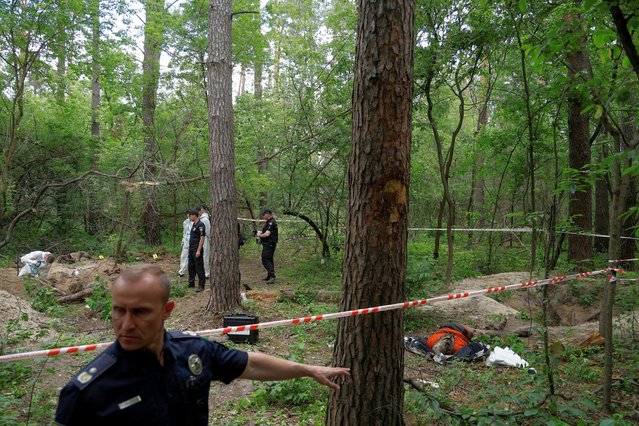 A police officer points at a site of a mass grave of people who, Ukrainian police say, were killed and buried at a position of Russian troops during Russia's invasion near the village of Vorzel, in Bucha district, Kyiv region, Ukraine on June 13, 2022. (Photo by Valentyn Ogirenko/Reuters) 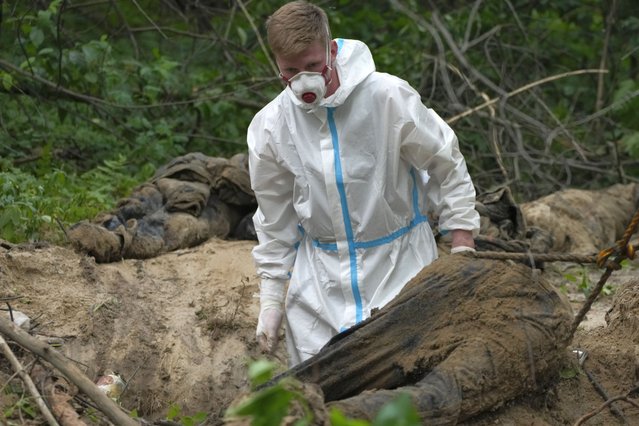 A member of an extraction crew works during an exhumation at a mass grave near Bucha, on the outskirts of Kyiv, Ukraine, Monday, June 13, 2022. (Photo by Natacha Pisarenko/AP Photo) 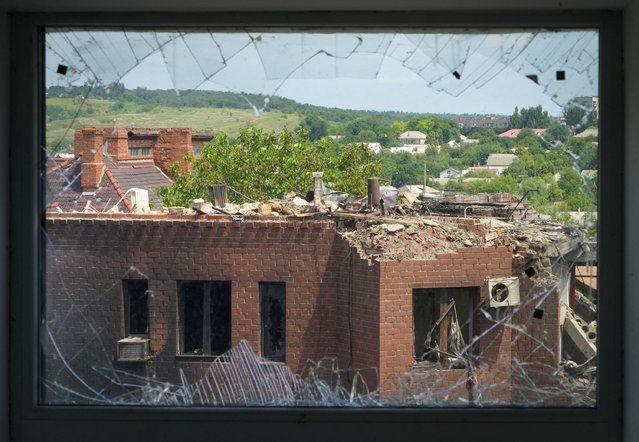 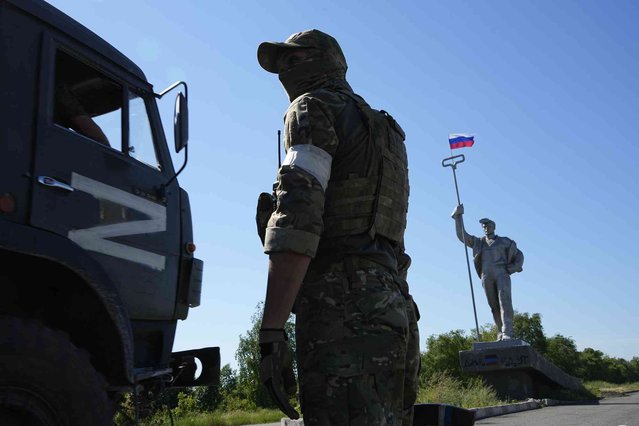 A military truck with the letter Z, which has become a symbol of the Russian military, drives past a Russian soldier standing in the road at the entrance of Mariupol with a Soviet style symbolic monument of a metallurgist, on the territory which is under the Government of the Donetsk People's Republic control, eastern Ukraine, Sunday, June 12, 2022. This photo was taken during a trip organized by the Russian Ministry of Defense. (Photo by AP Photo/Stringer) 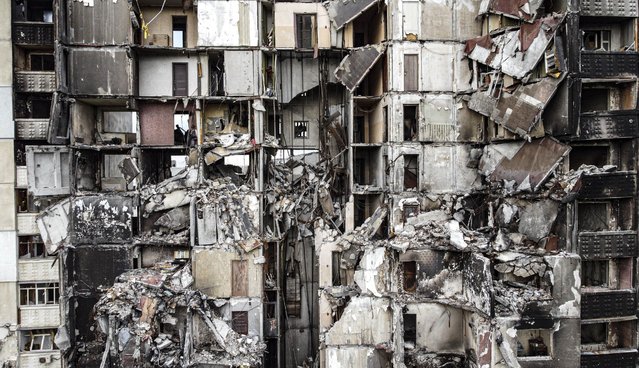 An aerial view of completely destroyed settlements after shellings as Russia – Ukraine war continues, in northern Saltivka-3 neighbourhood, about 40 km from the Russian border in Kharkiv in eastern Ukraine on June 12, 2022. Saltivka is a large residential neighbourhood, located in the northeastern region of Kharkiv. (Photo by Metin Aktas/Anadolu Agency via Getty Images) 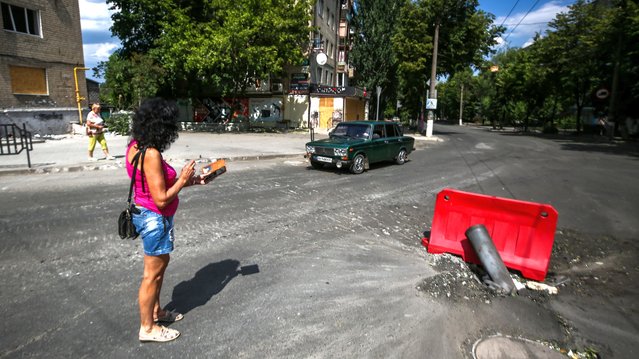 A woman photographs the remains of a shell from a multiple rocket launch system that struck a road, amid Russia's invasion of Ukraine, in Bakhmut, Ukraine June 13, 2022. (Photo by Serhii Nuzhnenko/Radio Free Europe/Radio Liberty) 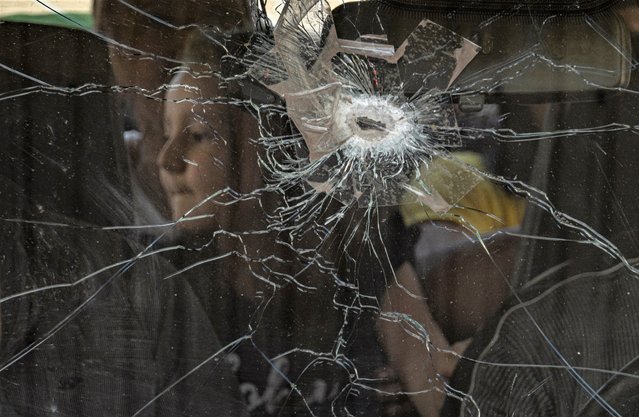 A picture taken during a visit to Mariupol organized by the Russian military shows a local girl drives on a car with a broken windshield in Mariupol, Ukraine, 12 June 2022. Russian Defense Minister Sergei Shoigu said “In Mariupol, water and electricity supply to residential areas is gradually being restored, streets are being cleared, the first social facilities have begun to function”. On 24 February Russian troops entered Ukrainian territory starting a conflict that has provoked destruction and a humanitarian crisis. According to the UNHCR, more than six million refugees have fled Ukraine, and a further 7.7 million people have been displaced internally within Ukraine since. (Photo by Sergei Ilnitsky/EPA/EFE) 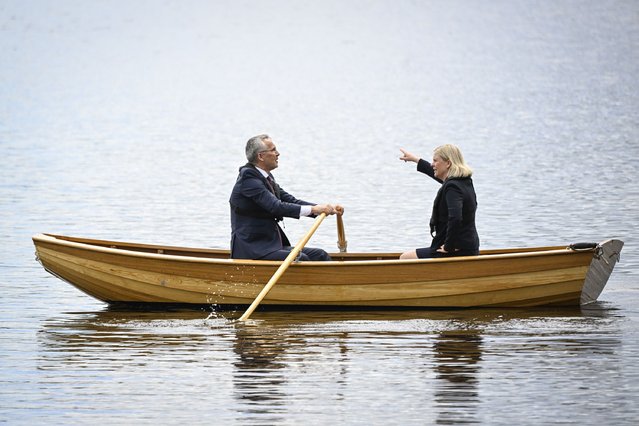 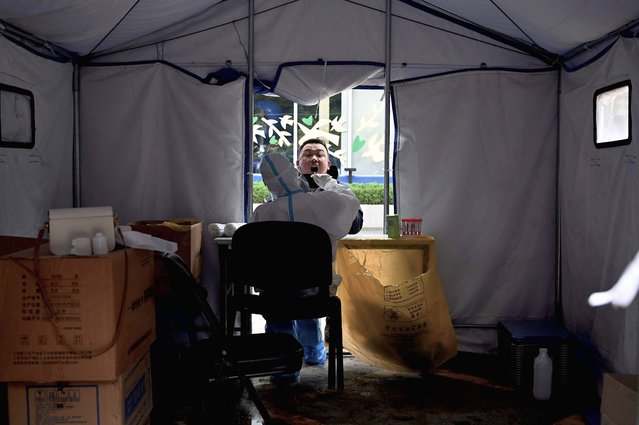 A health worker takes a swab sample from a man to be tested for the Covid-19 coronavirus at a swab collection site in Beijing on June 13, 2022. (Photo by Noel Celis/AFP Photo) 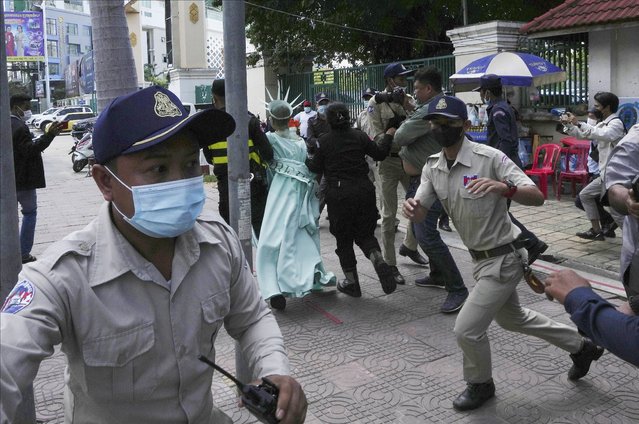 Cambodian-American lawyer Theary Seng, rear center, dressed in the Lady Liberty, is escorted by local police officers outside Phnom Penh Municipal Court in Phnom Penh, Cambodia, Tuesday, June 14, 2022. The Cambodian American lawyer and dozens of other members of a now-dissolved opposition party awaited a verdict Tuesday in their trial for treason that marked the latest move to tame all opposition to the long-running rule of Prime Minister Hun Sen. (Photo by Heng Sinith/AP Photo) 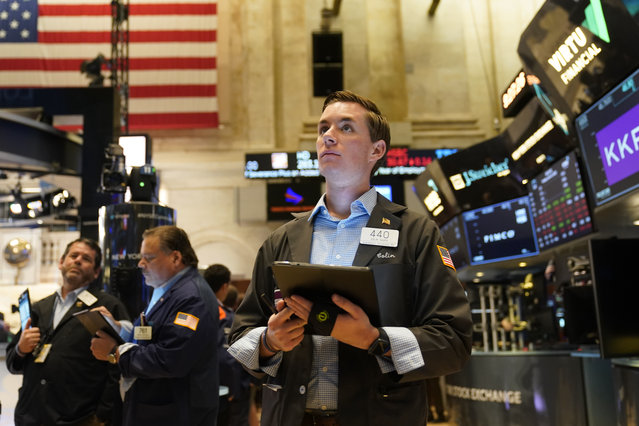 Traders work on the floor at the New York Stock Exchange in New York, Tuesday, June 14, 2022. Wall Street is wobbling between gains and losses Tuesday in its first trading after tumbling into a bear market on worries about a fragile economy and rising rates. (Photo by Seth Wenig/AP Photo) 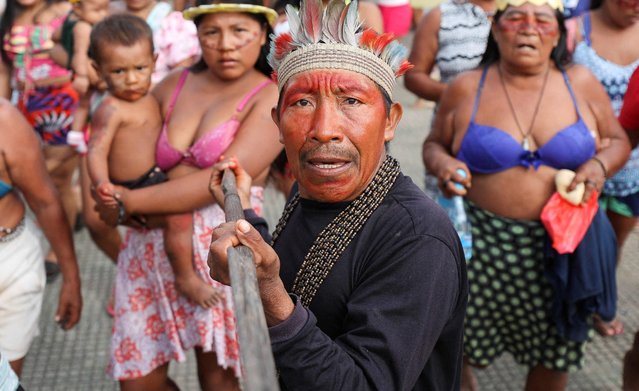 Indigenous people protest demanding for security in the region, following the disappearance of British journalist Dom Phillips and indigenous expert Bruno Araujo Pereira, who went missing while reporting in a remote and lawless part of the Amazon rainforest, near the border with Peru, in Atalaia do Norte, Amazonas state, Brazil on June 13, 2022. (Photo by Bruno Kelly/Reuters) 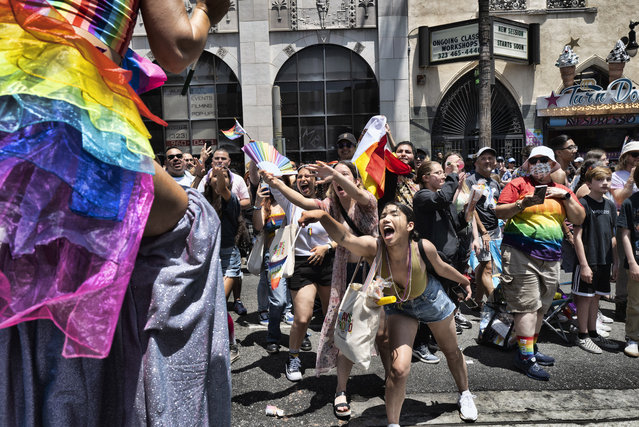 Spectators respond to a dancer along Hollywood Blvd. during the LA Pride Parade on Sunday, June 12, 2022 in the Hollywood section of Los Angeles. (Photo by Richard Vogel/AP Photo) 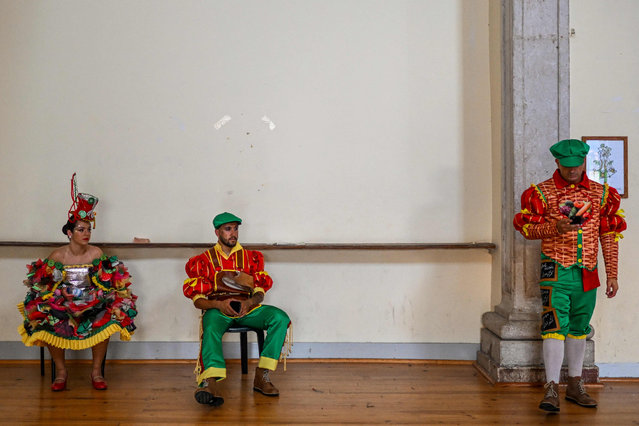 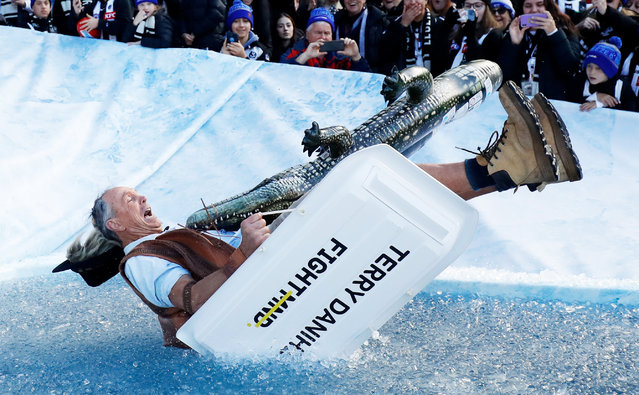 Terry Daniher goes down the slide during the 2022 AFL Round 13 match between the Collingwood Magpies and the Melbourne Demons at the Melbourne Cricket Ground on June 13, 2022 in Melbourne, Australia. (Photo by Dylan Burns/AFL Photos via Getty Images) 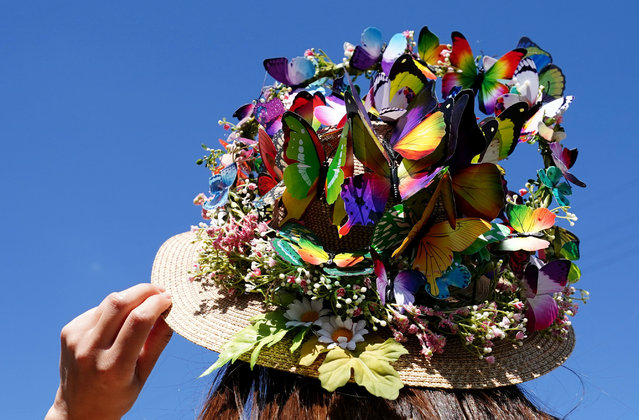 A racegoer in a hat decorated with butterflies ahead of day one of Royal Ascot at Ascot Racecourse in Ascot, Berkshire, England on Tuesday, June 14, 2022. (Photo by David Davies/PA Images via Getty Images) 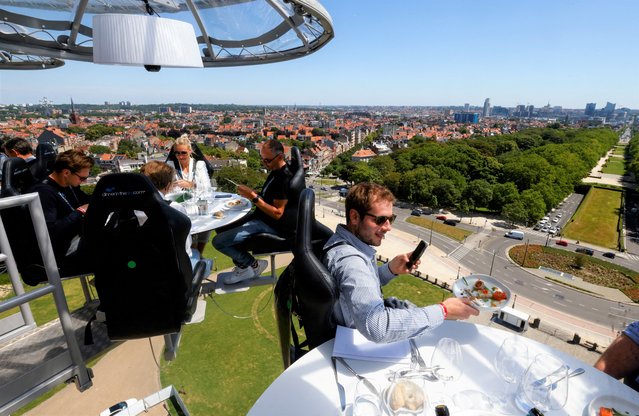 People sit at one of the eight tables on a nine ton structure, suspended from a crane at a height of fifty metres, that can accommodate a total of thirty two guests for a meal during an event known as “Dinner in the Sky” outside Koekelberg Basilica in Brussels, Belgium on June 14, 2022. (Photo by Yves Herman/Reuters) 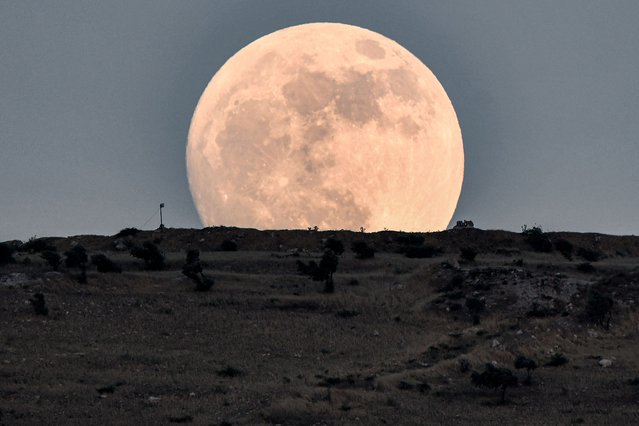 The waxing gibbous moon rises in the countryside of the village of Tal Sallur in the rebel-held Afrin region of Syria's northern Aleppo province on June 13, 2022, a day ahead of the June “strawberry supermoon”. (Photo by Rami al Sayed/AFP Photo) 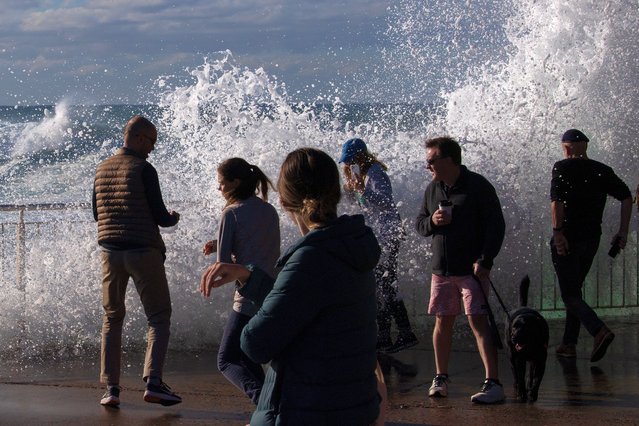 Members of the public watch the large swells at Bronte Beach in Sydney, Australia, 13 June 2022. (Photo by Bianca de Marchi/EPA/EFE) 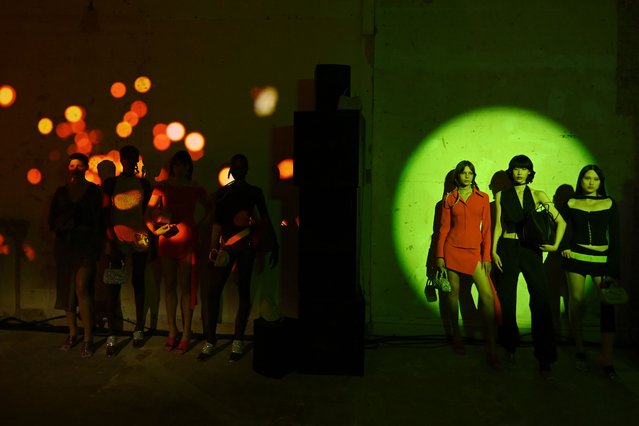 Models pose at the Yuzefi presentation during London Fashion Week June 2022 on June 12, 2022 in London, England. (Photo by Kate Green/BFC/Getty Images for BFC) 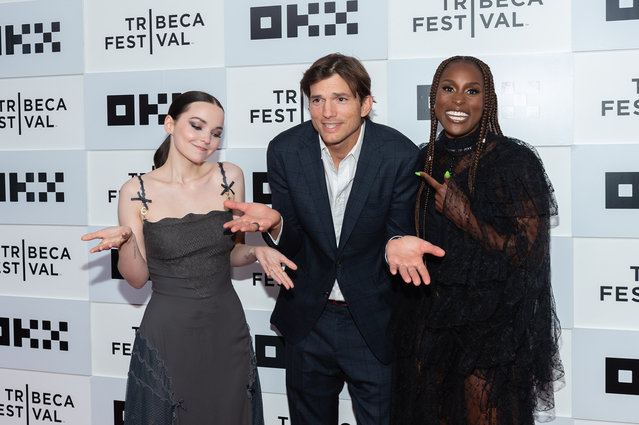