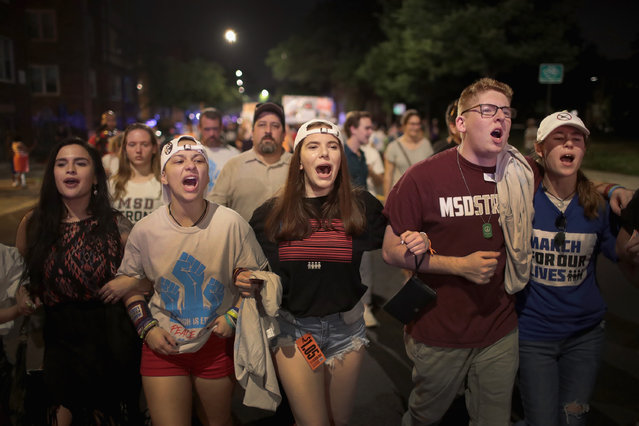 Students from Marjory Stoneman Douglas High School participate in an end of school year peace march and rally on June 15, 2018 in Chicago, Illinois. Chicago natives Jennifer Hudson and Chance the Rapper along with former Rep. Gabrielle Giffords were guests at the rally. (Photo by Scott Olson/Getty Images) 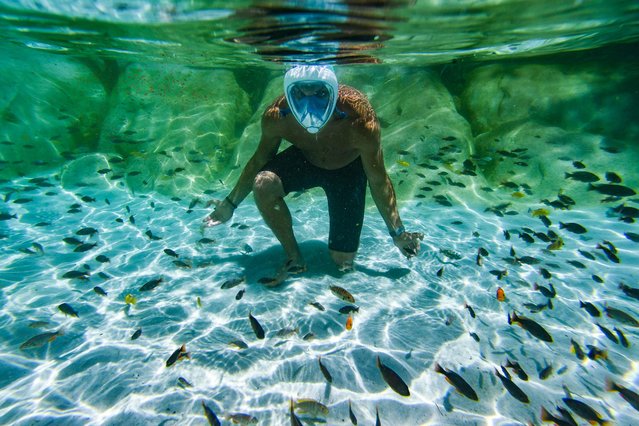 A tourist snorkels with tropical fishes in a swimming pool on June 14, 2018 at the “Zoom Torino” zoo in Cumiana, near Turin, Italy. This zoo is the first in Europe where is possible to practise snorkeling with typical tropical fishes of the Malawi Lake. (Photo by Marco Bertorello/AFP Photo) 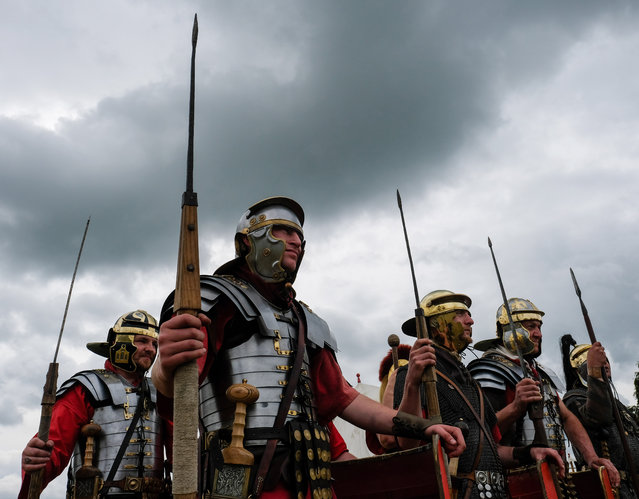 Roman Army re-enactors practice their drill during the Frontline Sedgefield living history event on June 17, 2018 in Durham, England. Depicting soldiers throughout history the weekend long event brings together living history groups representing Anglo Saxons, Vikings, Romans and the Civil War right through to the First and Second World Wars and to the present day. (Photo by Ian Forsyth/Getty Images) 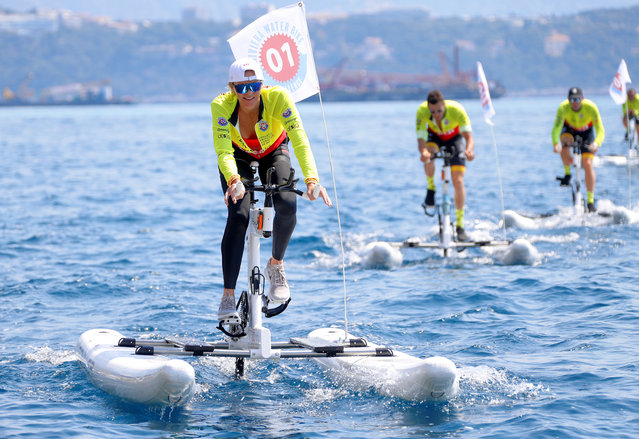 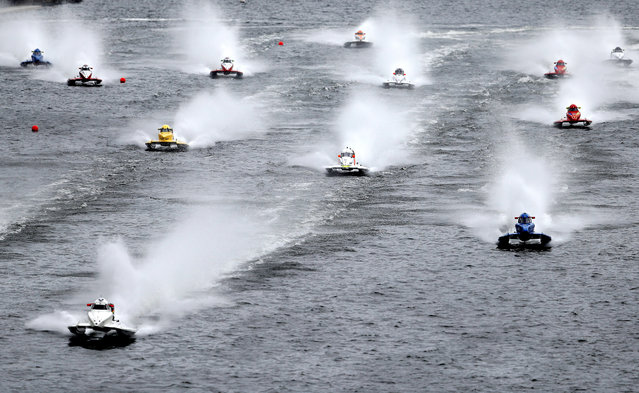 F1 powerboats race across the water in the F1H20 London Grand Prix in the Royal Victoria Dock in London, Britain, June 17, 2018. (Photo by Peter Nicholls/Reuters) 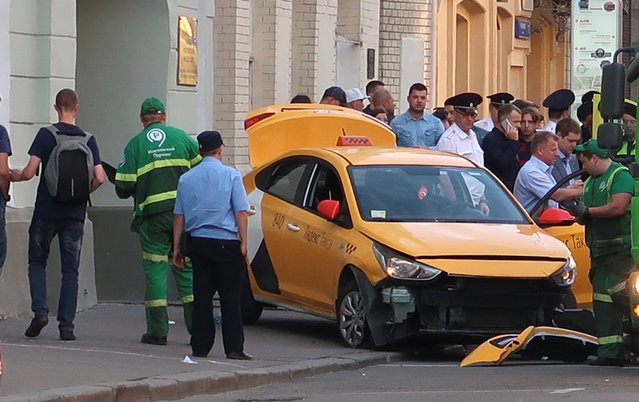 A view shows a damaged taxi, which ran into a crowd of people, in central Moscow, Russia June 16, 2018. The driver, identified by Moscow city authorities as a national of the central Asian republic of Kyrgyzstan, was taken into custody for questioning. The incident occurred on the third day of the Russia World Cup, with Moscow packed with foreign tourists who snap pictures of the Kremlin and Red Square. (Photo by Reuters/Staff) In this image taken from video provided by Viktoria Geranovich, a taxi driver, right, runs away from the scene after he crashed his taxi into pedestrians on a sidewalk near Red Square in Moscow, Russia, Saturday, June 16, 2018. Eight people, including two from Mexico, were injured in the crash. Video circulated on Russian social media and some news websites showed the taxi approaching a stopped line of cars, then veering onto the sidewalk and striking pedestrians. It then hit a traffic sign and bystanders tried to wrestle the driver out of the taxi, but he broke their grip and ran away; it was not clear how he was finally detained. (Photo by Viktoria Geranovich via AP Photo) 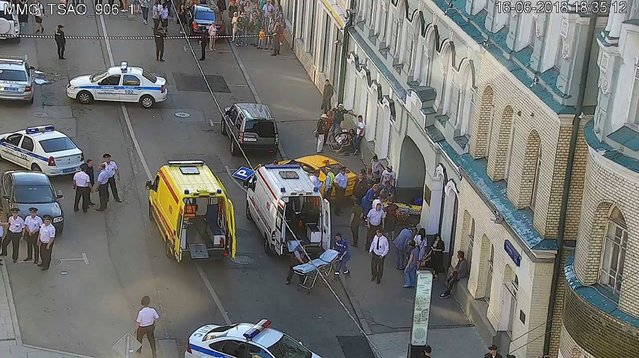 Police officers, investigators and members of emergency services work at the site of an accident after a taxi ran into a crowd of people in central Moscow, Russia June 16, 2018. (Photo by Moscow Traffic Management Centre Press Service/Handout via Reuters) 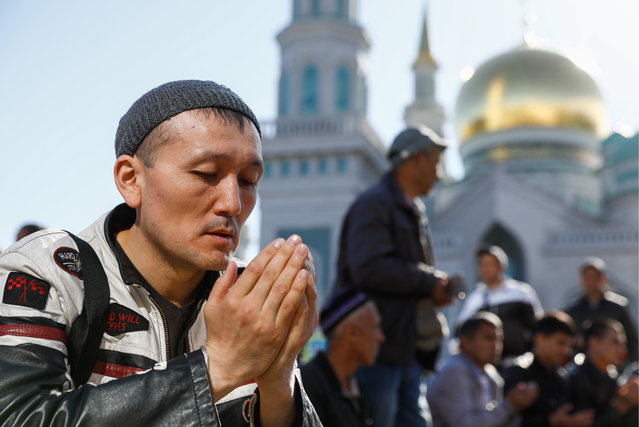 Muslims during celebrations of Eid al-Fitr, a holiday that marks the end of Ramadan, outside the Moscow Cathedral Mosque in Moscow, Russia on June 15, 2018. (Photo by Artyom Geodakyan/TASS) 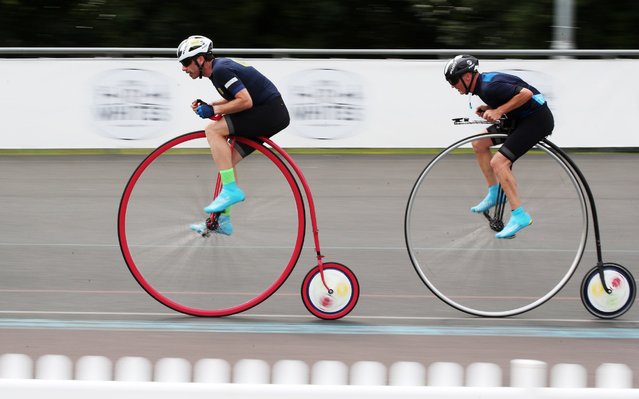 Record-breaking long-distance cyclist Mark Beaumont has broken a 127-year British Record on a Penny Farthing bike. The R.White’s Lemonade Penny Farthing One Hour British Record took place on June 15, 2018 at the “World Cycling Revival” festival in Herne Hill, London, UK. Beaumont beat the 21 miles and 180 yards British Record, which was set in 1891 at the same Herne Hill location, and Beaumont cycled 21 miles1616 yards in the hour. British lemonade brand R.White’s is behind all penny farthing activities at the World Cycling Revival three day festival in celebration of its Victorian heritage, which dates back to 1845. The brand supported the headline event, as well as offering penny farthing rides to festival-goers. (Photo by Joe Pepler/PinPepWENN.com) 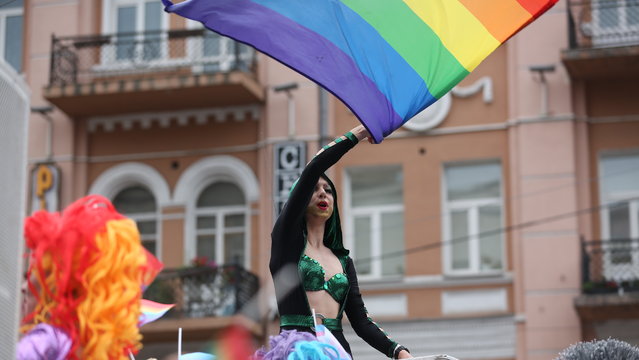 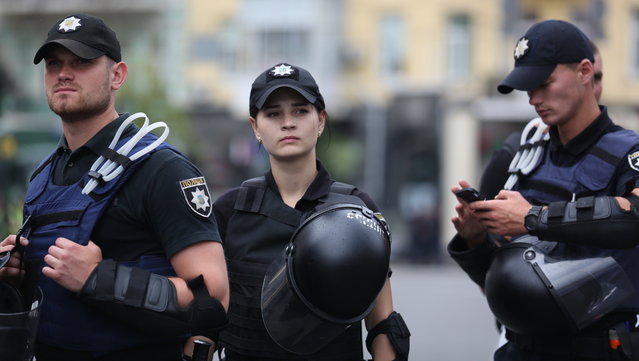 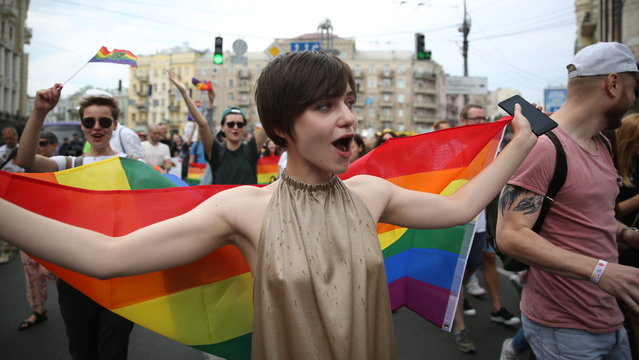 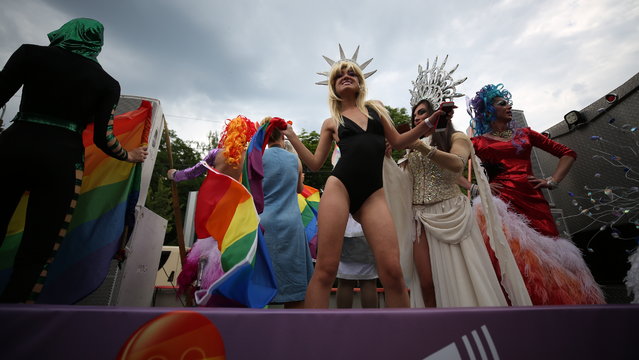 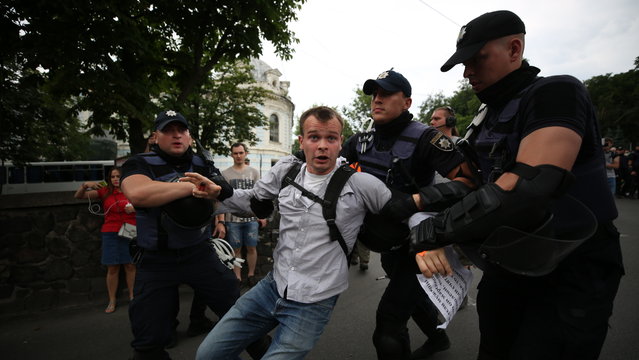 Policemen detain an activist during a protest against a gay pride march in central Kiev, Ukraine on June 17, 2018. (Photo by Serhii Nuzhnenko/Radio Free Europe/Radio Liberty) 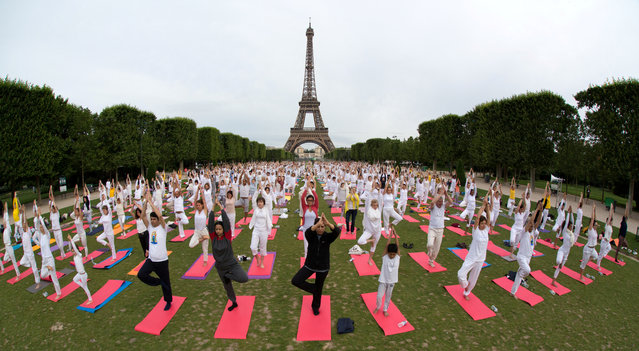 People gather for an open-air yoga session near the Eiffel tower in Paris, France on June 17, 2018. (Photo by Philippe Wojazer/Reuters) 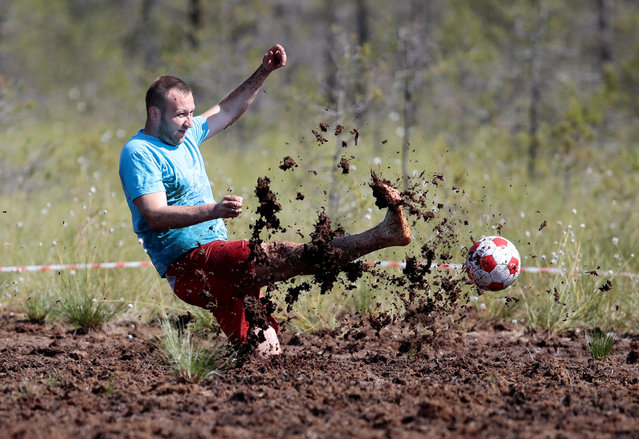 A soccer enthusiast kicks a ball while competing in the Swamp Football Cup of Russia in the village of Pogi in Leningrad Region, Russia June 16, 2018. (Photo by Anton Vaganov/Reuters) 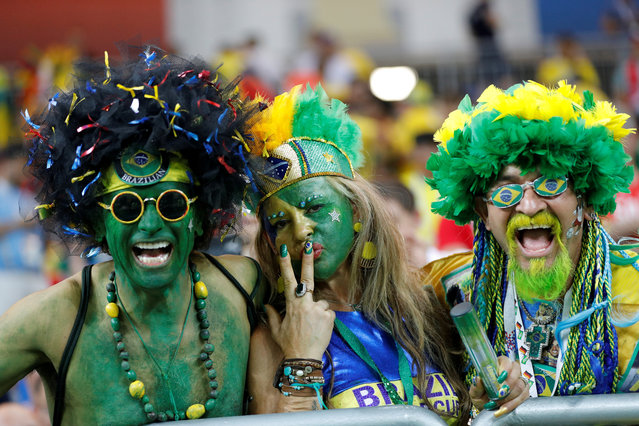 Brazil fans react before the Russia 2018 World Cup Group E football match between Brazil and Switzerland at the Rostov Arena in Rostov- On- Don on June 17, 2018. (Photo by Darren Staples/Reuters) 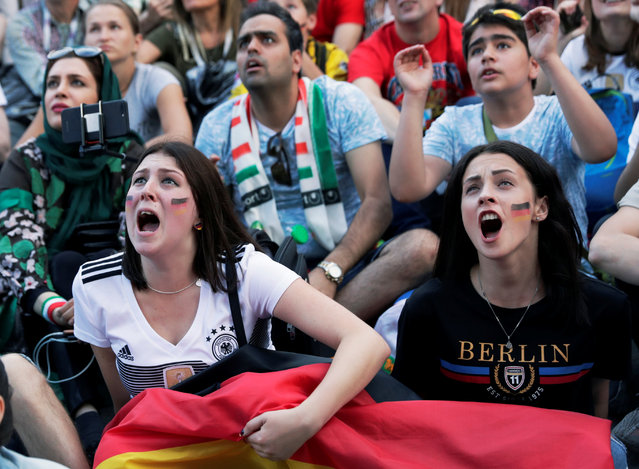 Germany fans react as they follow the game between Germany and Mexico on a giant screen at the Fifa Fans Fest in Saint Petersburg on June 17, 2018 during the Russia 2018 football World Cup tournament. (Photo by Henry Romero/Reuters) 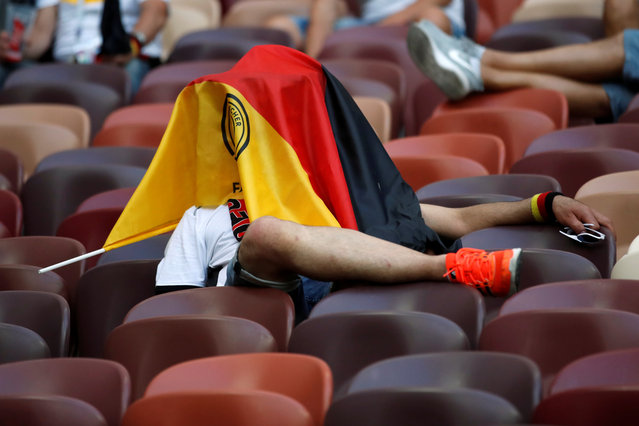 Germany fan covers their face with a flag in after the match between Germany and Mexico in Saint Petersburg on June 17, 2018 during the Russia 2018 football World Cup tournament. (Photo by Carl Recine/Reuters) 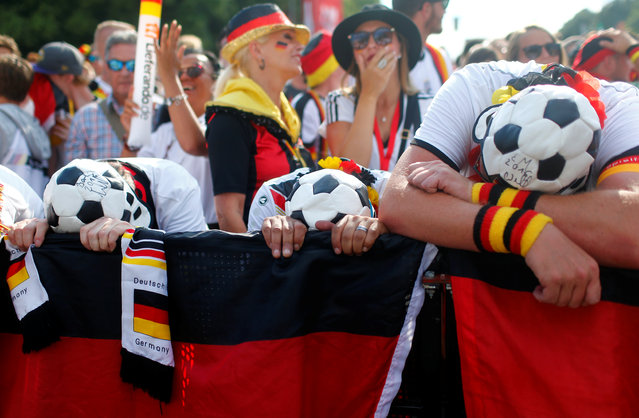 Germany fans at Brandenburg Gate in Berlin, Germany after the match between Germany and Mexico on June 17, 2018 during the Russia 2018 football World Cup tournament. (Photo by annibal Hanschke/Reuters) 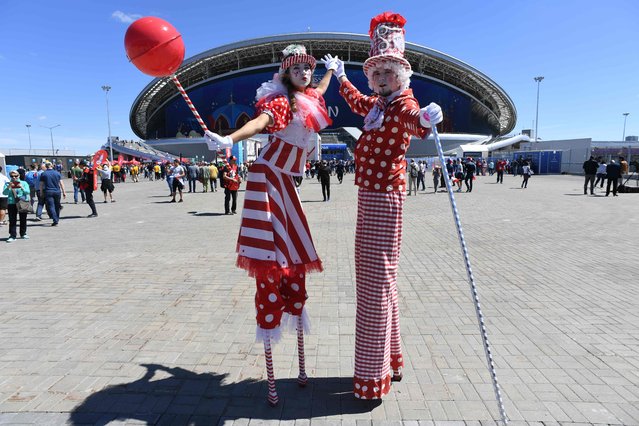 Fans arrive ahead of the Russia 2018 World Cup Group C football match between France and Australia at the Kazan Arena in Kazan on June 16, 2018. (Photo by Kirill Kudryavtsev/AFP Photo) 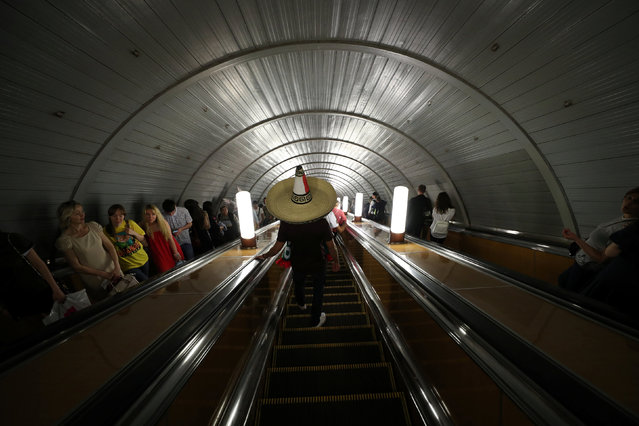 A Mexico's fan travels on the escalator at a metro station before the match between Germany and Mexico at the Luzhniki Stadium in Moscow, Russia on June 17, 2018. (Photo by Albert Gea/Reuters) 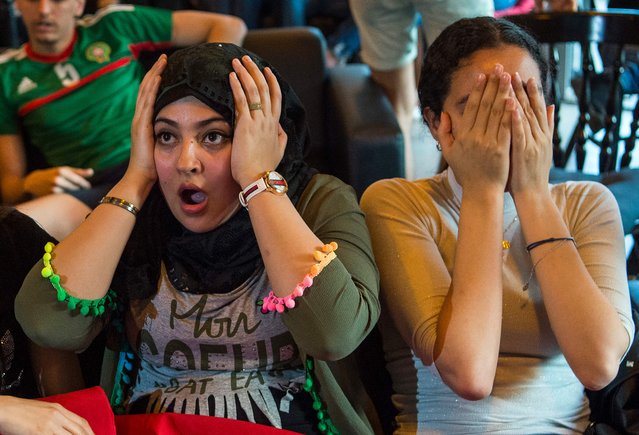 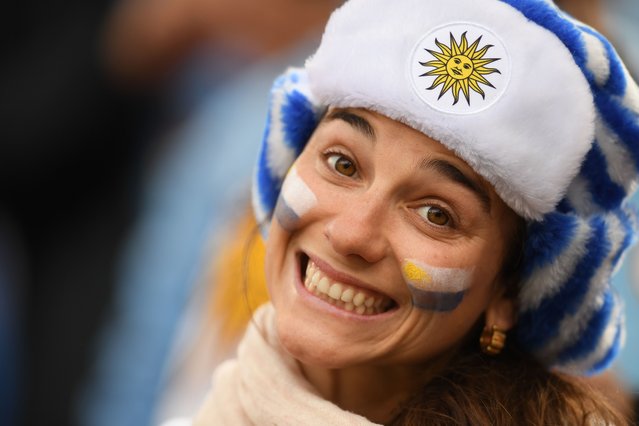 A Uruguay fan with a painted face is seen before kick off of the Russia 2018 World Cup Group A football match between Egypt and Uruguay at the Ekaterinburg Arena in Ekaterinburg, Russia on June 15, 2018. (Photo by Jorge Guerrero/AFP Photo) 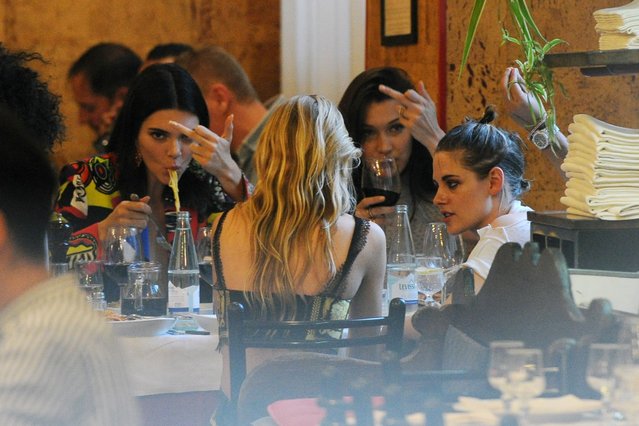