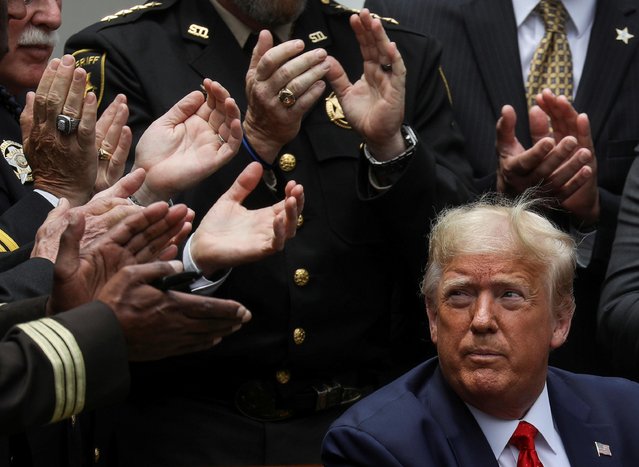 U.S. President Donald Trump listens to applause after signing an executive order on police reform during a ceremony in the Rose Garden at the White House in Washington, U.S., June 16, 2020. (Photo by Leah Millis/Reuters) 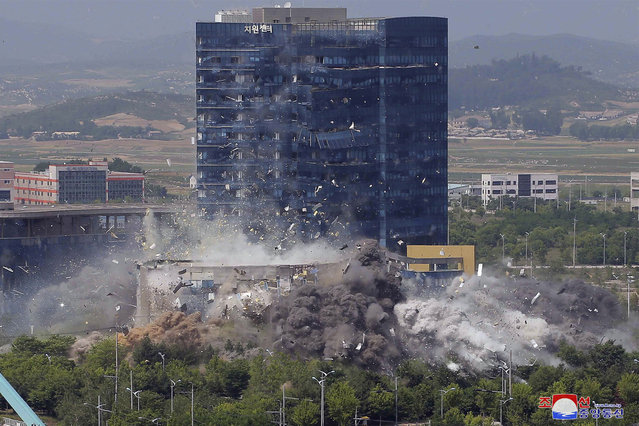 This photo provided by the North Korean government shows the explosion of an inter-Korean liaison office building in Kaesong, North Korea, Tuesday, June 16, 2020. South Korea says that North Korea has exploded the inter-Korean liaison office building just north of the tense Korean border. Independent journalists were not given access to cover the event depicted in this image distributed by the North Korean government. The content of this image is as provided and cannot be independently verified. (Photo by Korean Central News Agency/Korea News Service via AP Photo) 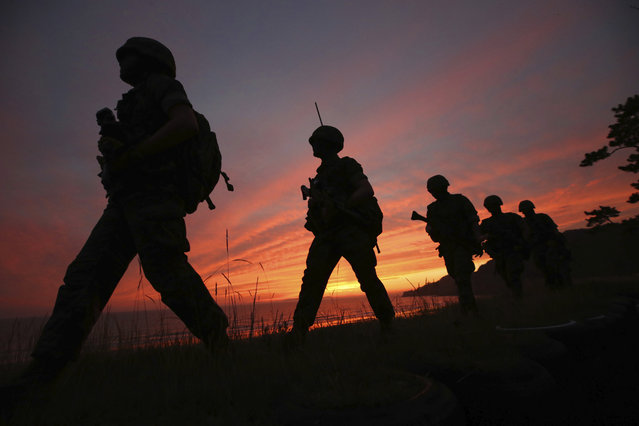 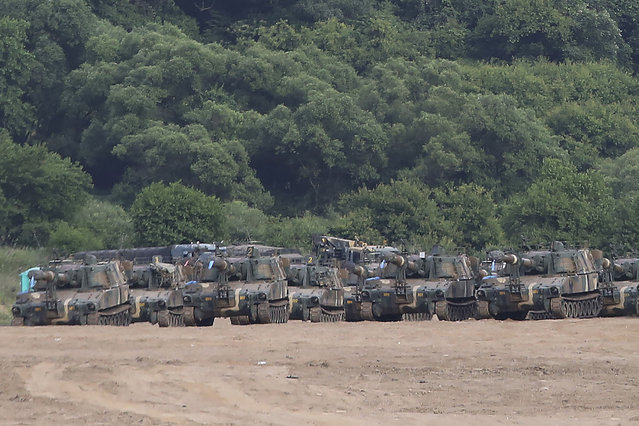 South Korean army's K-55 self-propelled howitzers are seen at the border with North Korea, South Korea, Tuesday, June 16, 2020. North Korea blew up an inter-Korean liaison office building just inside its border in an act Tuesday that sharply raises tensions on the Korean Peninsula amid deadlocked nuclear diplomacy with the United States. (Photo by Ahn Young-joon/AP Photo) 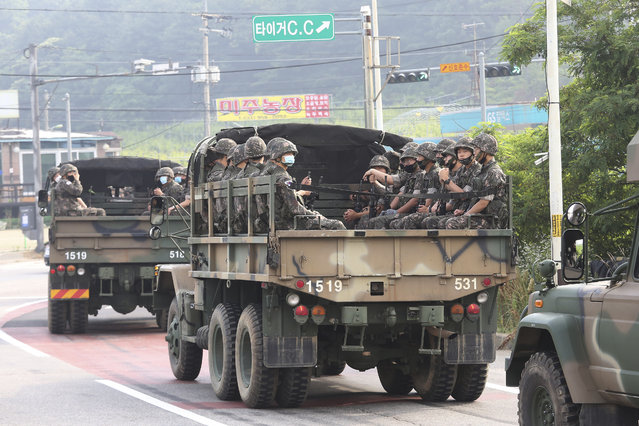 South Korean army soldiers ride on the back of trucks in Paju, near the border with North Korea, South Korea, Wednesday, June 17, 2020. (Photo by Ahn Young-joon/AP Photo) 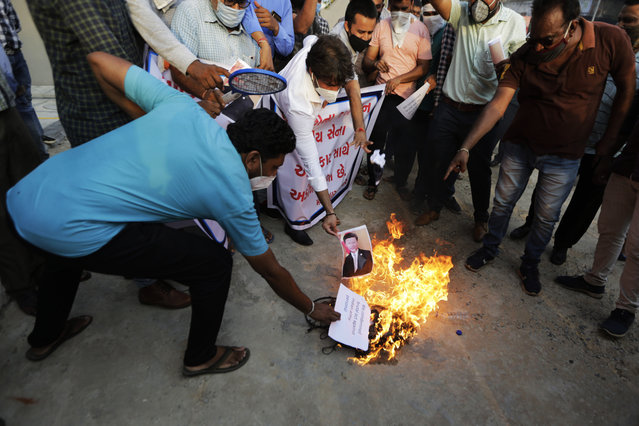 An Indian man burns a photograph of Chinese president Xi Jinping during a protest against China in Ahmedabad, India, Tuesday, June 16, 2020. At least three Indian soldiers, including a senior army officer, were killed in a confrontation with Chinese troops along their disputed border high in the Himalayas where thousands of soldiers on both sides have been facing off for over a month, the Indian army said Tuesday. (Photo by Ajit Solanki/AP Photo) 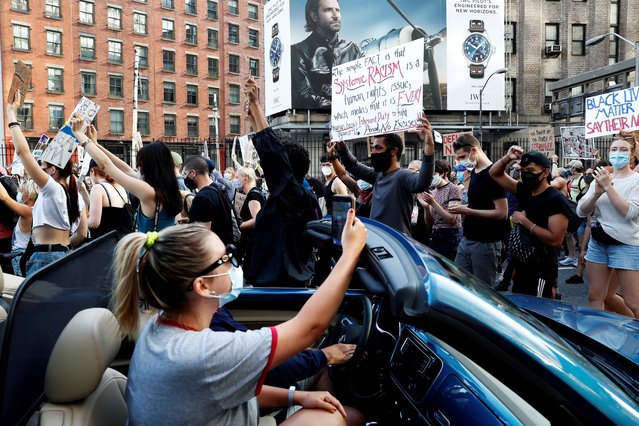 Demonstrators march as cars are stopped during a protest against racial inequality in the aftermath of the death in Minneapolis police custody of George Floyd, in New York, U.S., June 15, 2020. (Photo by Shannon Stapleton/Reuters) 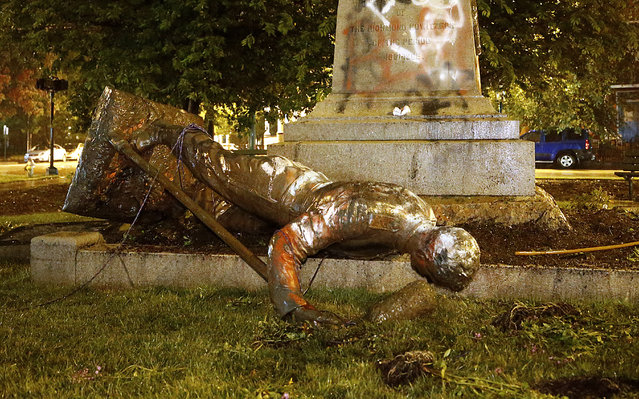 A statue from the Richmond Howitzers Monument in Richmond, Va., lies after being toppled Tuesday night, June 16, 2020, in Richmond, Va. The monument was erected in 1892 to commemorate a Richmond Civil War artillery unit. (Photo by Alexa Welch Edlund/Richmond Times-Dispatch via AP Photo) 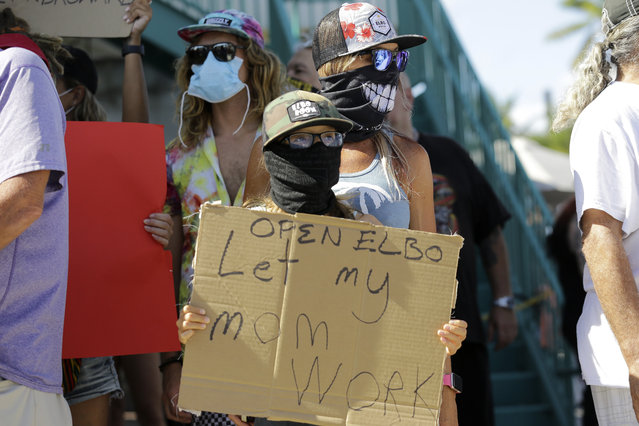 Bartender Kat DeLaTorre stands with her son Nico, 12, during a “Right to Work” rally outside of the Elbo Room bar, which remains closed, during the new coronavirus pandemic, Tuesday, June 16, 2020, in Fort Lauderdale, Fla. Across Florida, bars were part of the Phase 2 reopenings that occurred earlier in June, except in three counties in South Florida. (Photo by Lynne Sladky/AP Photo) 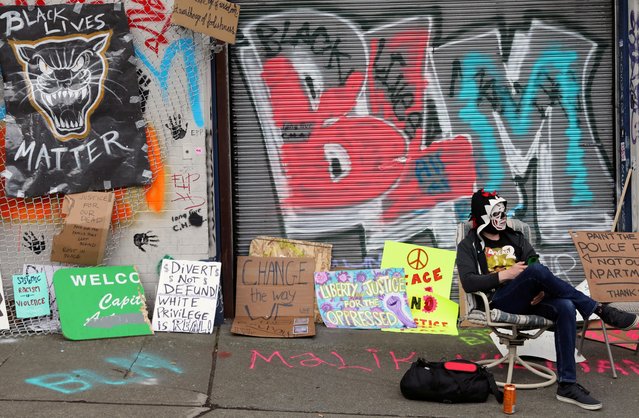 A demonstrator sits at the self-proclaimed Capitol Hill Autonomous Zone (CHAZ) during a protest against racial inequality and call for defunding of Seattle police, in Seattle, Washington, U.S. June 15, 2020. (Photo by Goran Tomasevic/Reuters) Security forces are seen during a protest against the death of a teenager who disappeared after intervention by military police at Vila Clara neighborhood, in Sao Paulo, Brazil, June 15, 2020. (Photo by Amanda Perobelli/Reuters) 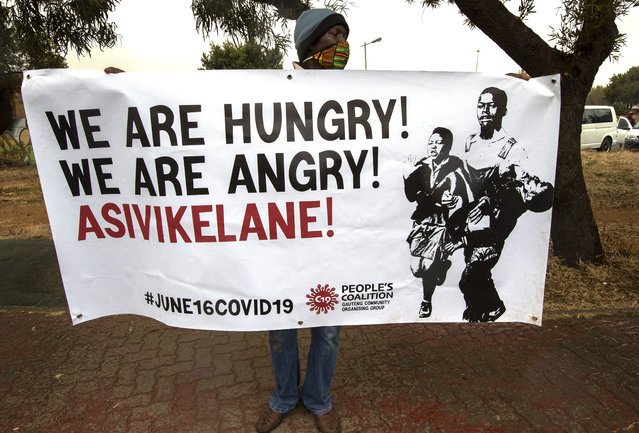 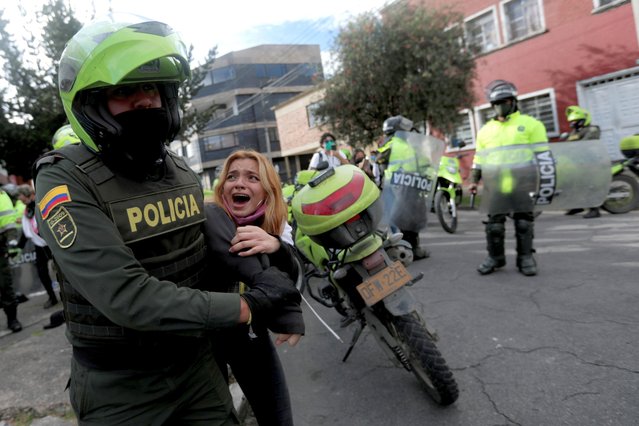 A demonstrator is detained by police officers, during a protest among a series of ongoing demonstrations calling for dignified life, amidst an outbreak of the coronavirus disease (COVID19), in Bogota, Colombia on June 15, 2020. (Photo by Luisa Gonzalez/Reuters) 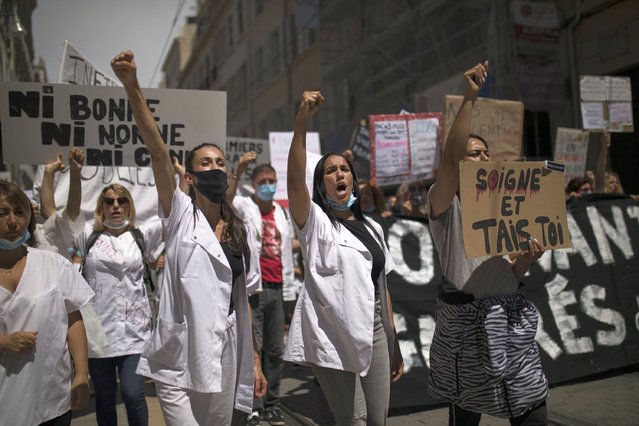 Medical workers chant slogans during a demonstration in Marseille, southern France, Tuesday, June 16, 2020. French hospital workers and others are protesting in cities around the country to demand better pay and more investment in France's public hospital system, which is considered among the world's best but struggled to handle a flux of virus patients after years of cost cuts. France has seen nearly 30,000 virus deaths. (Photo by Daniel Cole/AP Photo) 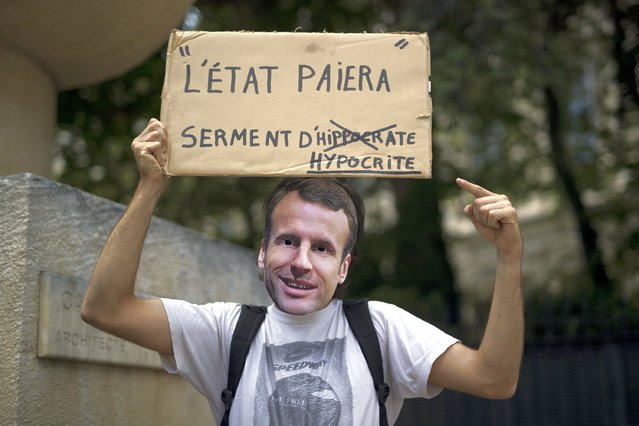 A protester wearing a mask depicting French President Emmanuel Macron gestures towards a sign that reads “the state will pay, oath of hypocrisy” during a demonstration in Marseille, southern France, Tuesday, June 16, 2020. (Photo by Daniel Cole/AP Photo) 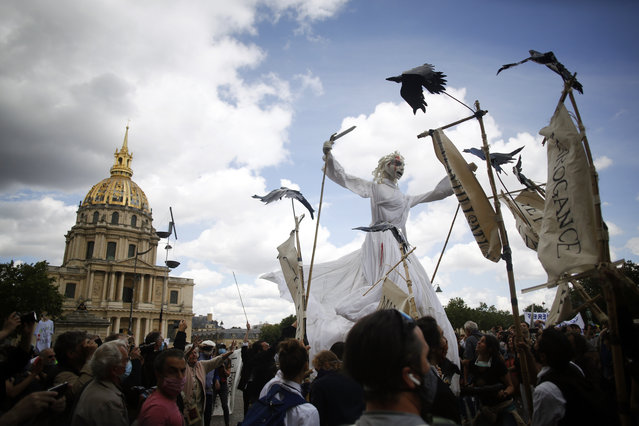 A giant puppet is paraded during a demonstration of hospitals workers, Tuesday, June 16, 2020 in Paris. French hospital workers and others are protesting in cities around the country to demand better pay and more investment in France's public hospital system, which is considered among the world's best but struggled to handle a flux of virus patients after years of cost cuts. France has seen nearly 30,000 virus deaths. (Photo by Thibault Camus/AP Photo) 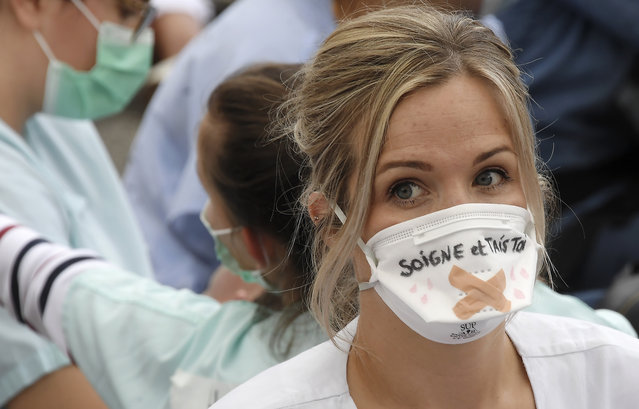 A health worker wearing a protective face mask with a handwritten message reading “Take care and shut up” as she takes part in a demonstration near the Regional Health Agency (ARS – Agence Regionale de la Sante) as part of a nationwide day of protests to demand better working conditions in Strasbourg, eastern France on June 16, 2020. (Photo by Frederick Florin/AFP Photo) 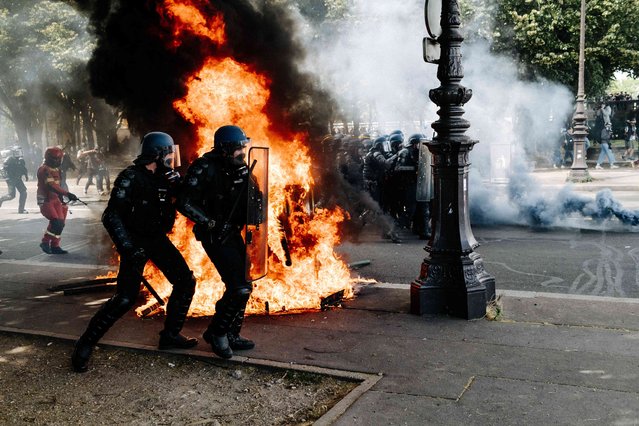 In Paris, doctors, orderlies and nurses demonstrated as well as all over France to remind the government of its promises on the hospital, in the middle of the “Segur de la sante” on June 16, 2020. The demonstration brought together several thousand people, with a few clashes on the esplanade des Invalides at the end of the day. (Photo by Jan Schmidt-Whitley/Le Pictorium Agency via ZUMA/Rex Features/Shutterstock)
Edit Del
18 Jun 2020 00:03:00, post received 0 comments
Publication archive:
←   →
Popular tags:
All tags
Last searches: