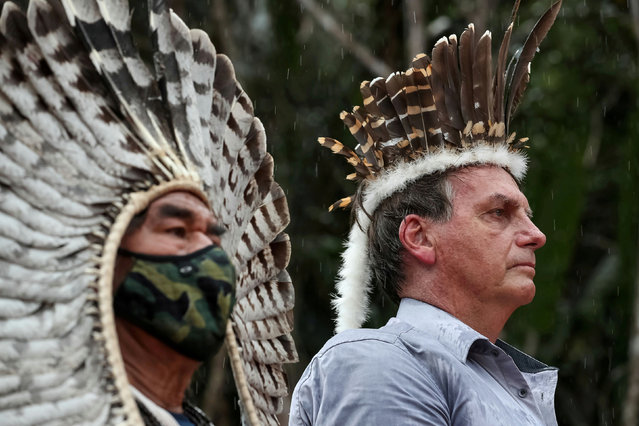 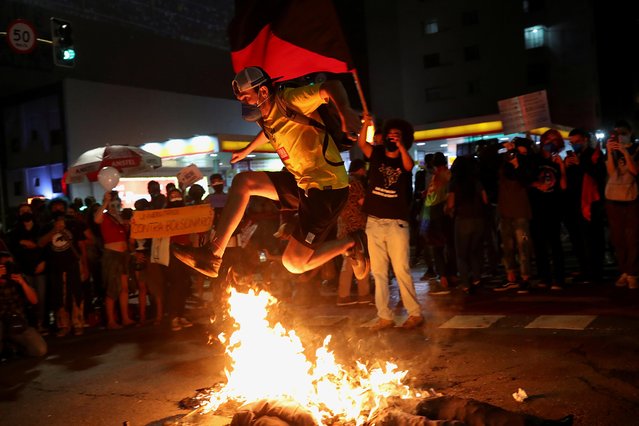 A man jumps over a burning doll depicting Brazilian President Jair Bolsonaro during a protest against him, in front of the Museum of Modern Art in Sao Paulo, Brazil, May 29, 2021. (Photo by Amanda Perobelli/Reuters) 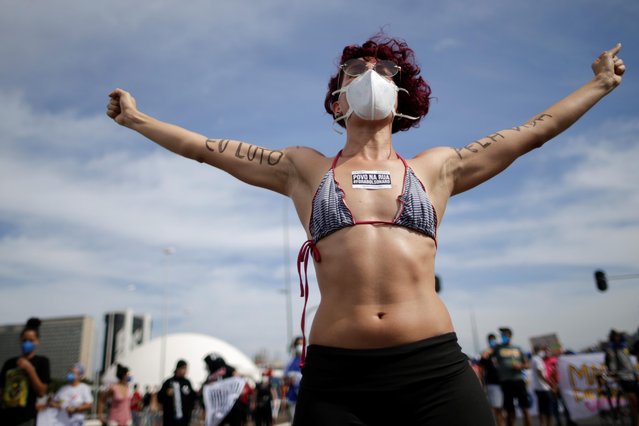 A demonstrator gestures during a protest against Brazil's President Jair Bolsonaro in Brasilia, Brazil, May 29, 2021. (Photo by Ueslei Marcelino/Reuters) 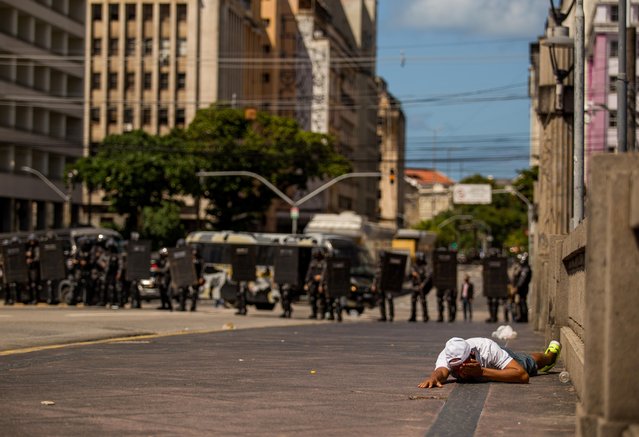 A man lies down as riot police and anti-Bolsonaro protesters clash in Recife, Brazil, May 29, 2021. (Photo by Instagram @hugomunizzz via Reuters) 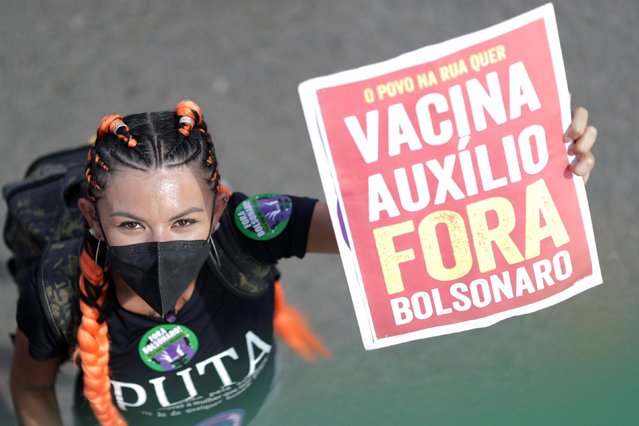 A demonstrator holds a banner reading, “The people on the street want vaccine emergency aid. Bolsonaro out”, during a protest against Brazil's President Jair Bolsonaro in Brasilia, Brazil, May 29, 2021. (Photo by Ueslei Marcelino/Reuters) 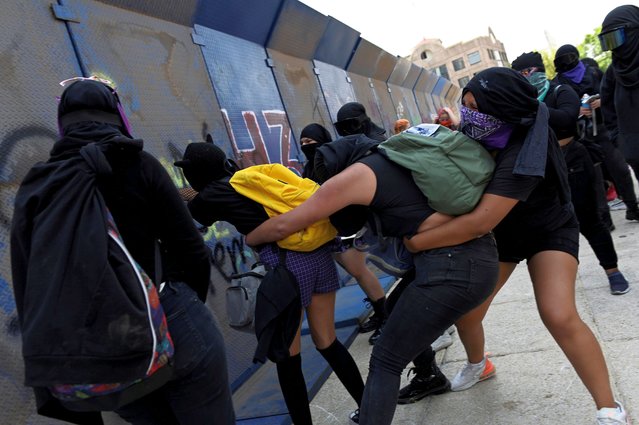 Demonstrators try to remove a fence protecting a monument during a protest of feminist collectives against the police and the excess of public force used to disperse peaceful protests, in downtown Mexico City, Mexico, May 29, 2021. (Photo by Mahe Elipe/Reuters) 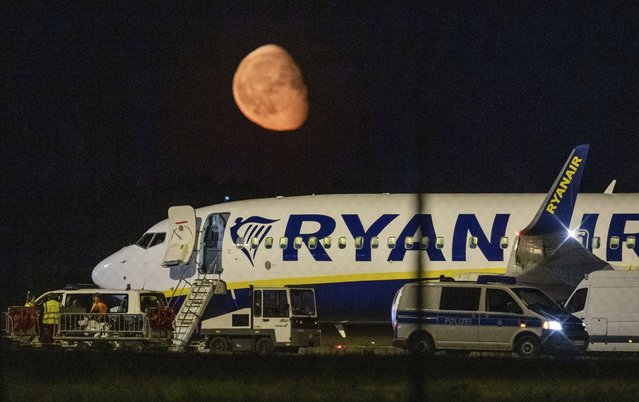 Federal police inspect a Ryanair aircraft after the unscheduled landing of the plane at the Berlin International Airport in Schoenefeld near Berlin, Germany, Monday, Mai 31, 2021. (Photo by Christophe Gateau/dpa via AP Photo) 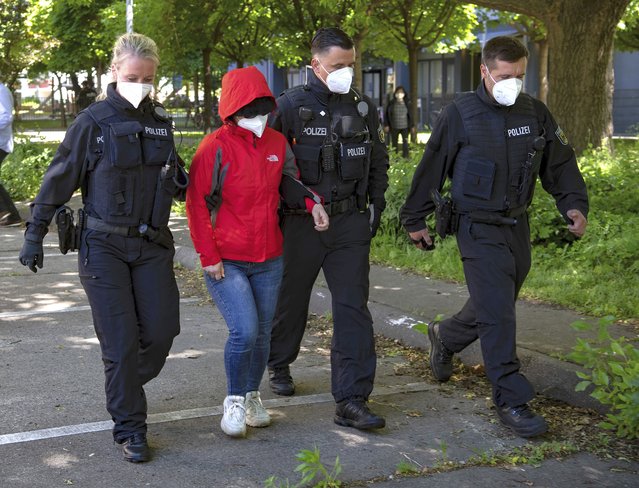 Police officers lead a woman to a vehicle during a raid against a group of people suspect to brought Vietnamese people to Europe on fraudulently obtained visas, in Berlin, Germany, May 31, 2021. Authorities say suspects have been arrested in Germany and Slovakia in raids on a group accused of smuggling Vietnamese people into Germany and other European countries for large fees that they had to work off in massage parlors and brothels among other places. (Photo by Paul Zinken/dpa via AP Photo) 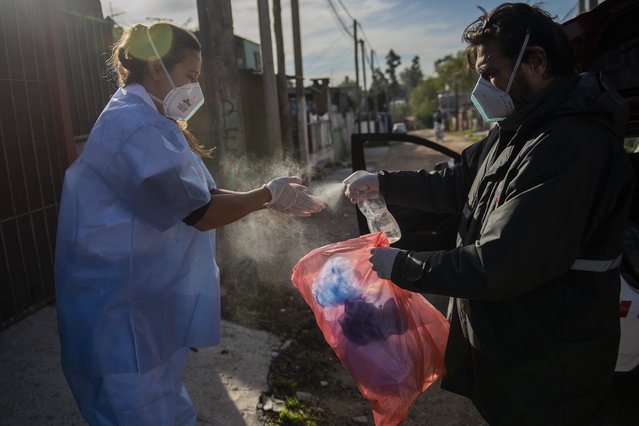 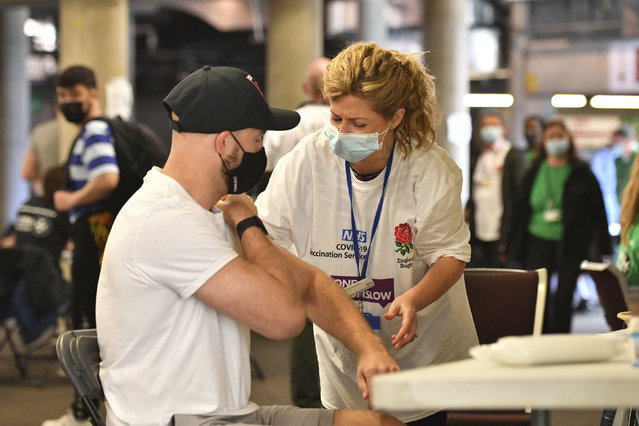 A member of the public prepares to receive a coronavirus vaccination at a surge vaccine operation set up at Twickenham rugby stadium, south-west London, Monday May 31, 2021. Up to 15,000 doses of vaccine are ready to be administered at the walk-in centre which has been set up for residents of north-west London in response to an increase in the number of coronavirus cases in the area. (Photo by Dominic Lipinski/PA Wire via AP Photo) 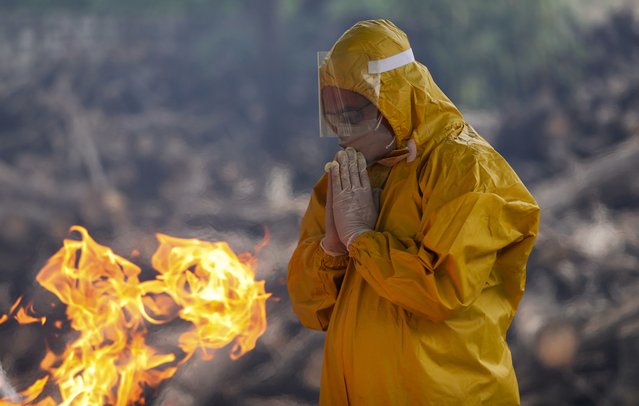 A family member prays as he performs the last rites of a person who died due to COVID-19 at a crematorium in Jammu, India, Monday, May 31, 2021. (Photo by Channi Anand/AP Photo) 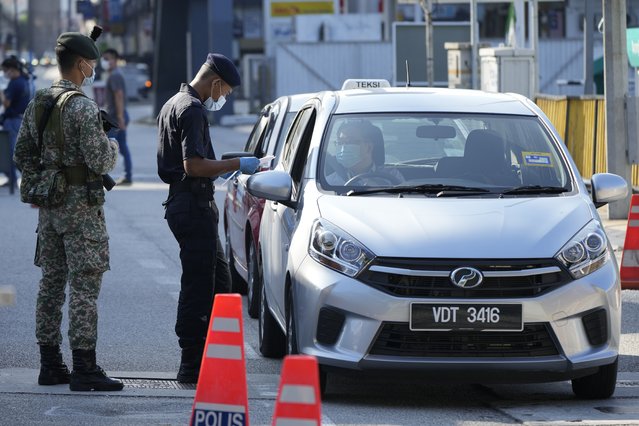 Police check passengers in vehicles at a roadblock during the first day of Full Movement Control Order (MCO) in Kuala Lumpur, Malaysia, Tuesday, June 1, 2021. Malls and most businesses in Malaysia shuttered Tuesday as the country began its second near total coronavirus lockdown to tackle a worsening pandemic that has put its healthcare system on the verge of collapse. (Photo by Vincent Thian/AP Photo) 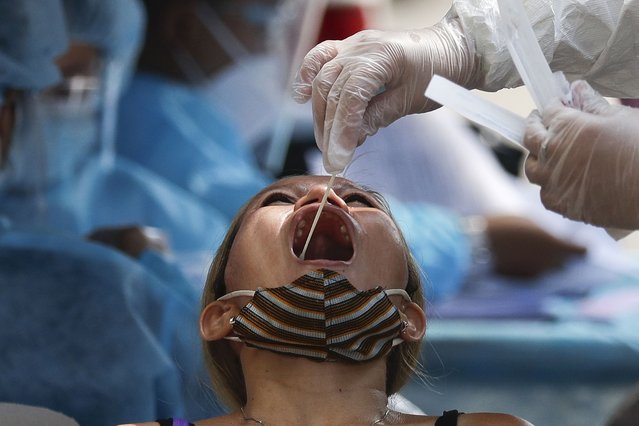 A health worker conducts a COVID-19 swab test on a resident as they monitor cases at a village in Quezon City, Philippines on Monday, May 31, 2021. The president of the Philippines recently warned he will jail village leaders and police officers who don't enforce pandemic lockdown restrictions to prevent the spread of the coronavirus. (Photo by Aaron Favila/AP Photo) 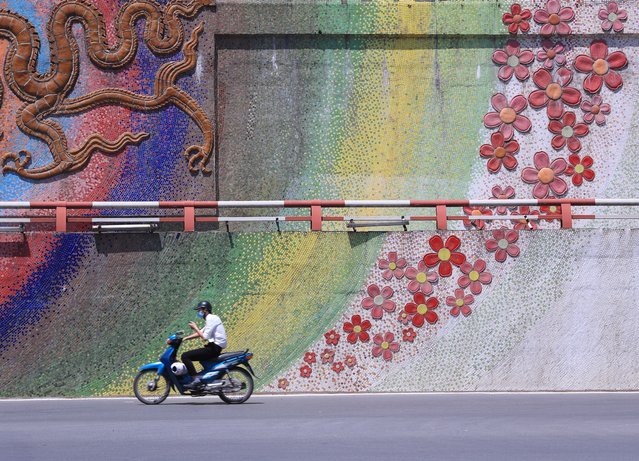 A man rides motorcycle in Hanoi, Vietnam Monday, May 31, 2021. Vietnam plans to test all 9 million people in its largest city for the coronavirus and imposed more restrictions Monday to deal with a growing COVID-19 outbreak. (Photo by Hau Dinh/AP Photo) 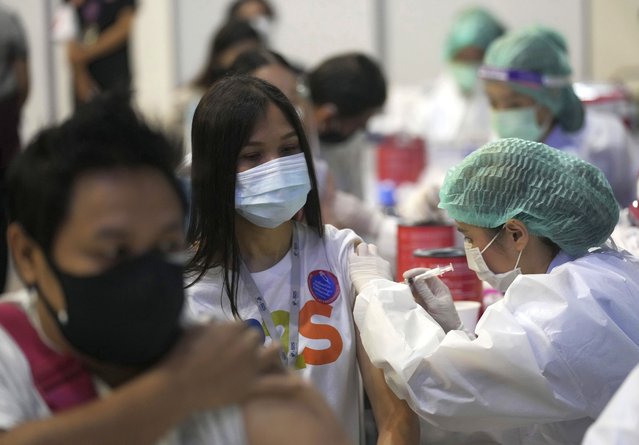 A health worker administers a dose of the Sinovac COVID-19 vaccine to a woman in Bangkok, Thailand, Monday, May 31, 2021. (Photo by Sakchai Lalit/AP Photo) 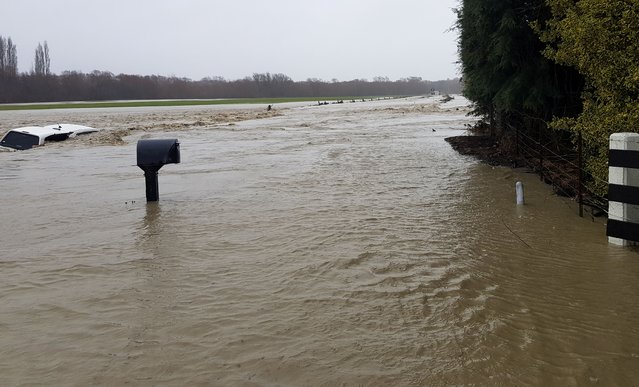 In this photo released by Chris Allen, a car is abandoned in flooded waters in Ashburton Forks near Christchurch, New Zealand Sunday, May 30, 2021. Several hundred people in New Zealand were evacuated from their homes while others recounted dramatic helicopter rescues as heavy rain caused widespread flooding in the Canterbury region. (Photo by Chris Allen via AP Photo) 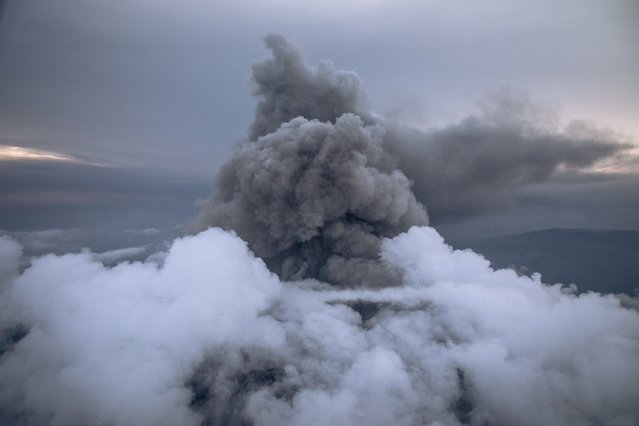 This aerial photo taken on May 30, 2021 shows the column of ash expelled from the crater of Nyiragongo volcano, north of Goma, the provincial capital of North Kivu. The Nyiragongo, Africa's most active volcano, located in the Virunga National Park, erupted on May 22, 2021, killing 32 people and sweeping away the electricity facilities. The possibility of a second eruption in the coming days is not ruled out by scientists on the ground. (Photo by Alexis Huguet/AFP Photo) 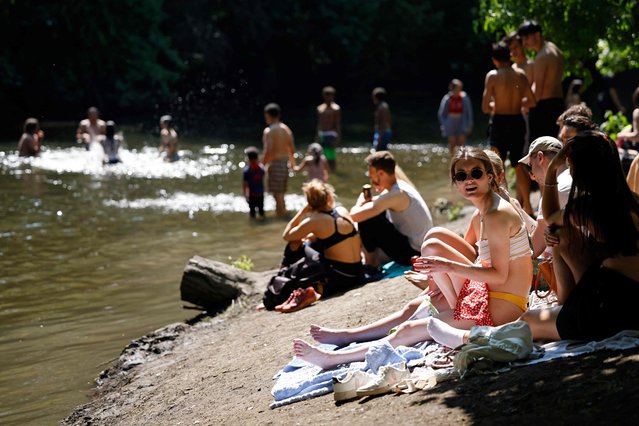 Sun-seekers cool off in the water and sunbathe on the riverbank at Hackney Marshes in east London on May 31, 2021, as fine and dry conditions continue in the UK on what could be the hottest day of the year so far. (Photo by Tolga Akmen/AFP Photo) 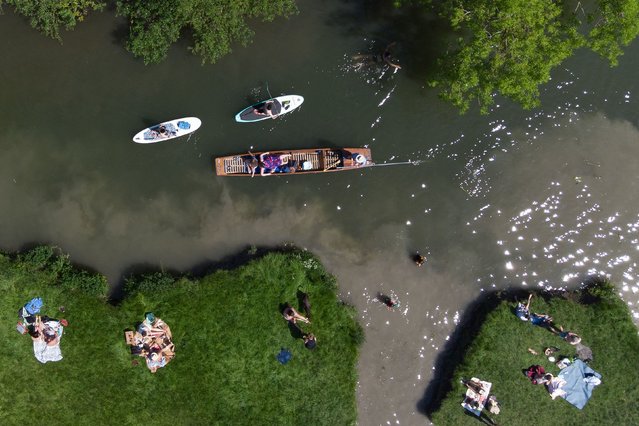 People punt and kayak on the River Cam at Grantchester Meadows near Cambridge on Monday, May 31, 2021, as Bank Holiday Monday could be the hottest day of the year so far – with temperatures predicted to hit 25°C in parts of the United Kingdom. (Photo by Joe Giddens/PA Images via Getty Images) 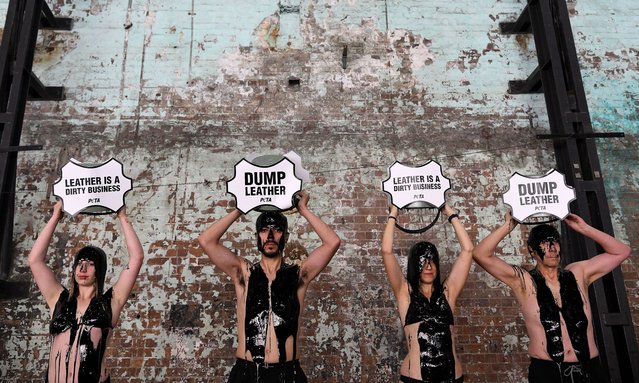 Supporters of the People for the Ethical Treatment of Animals (PETA) take part in a “Toxic Slime” protest during the 2021 Afterpay Australian Fashion Week, in Sydney, New South Wales, Australia, 31 May 2021. Activists protested the use of leather by covering themselves in a black oily substance. (Photo by Bianca de Marchi/EPA/EFE) 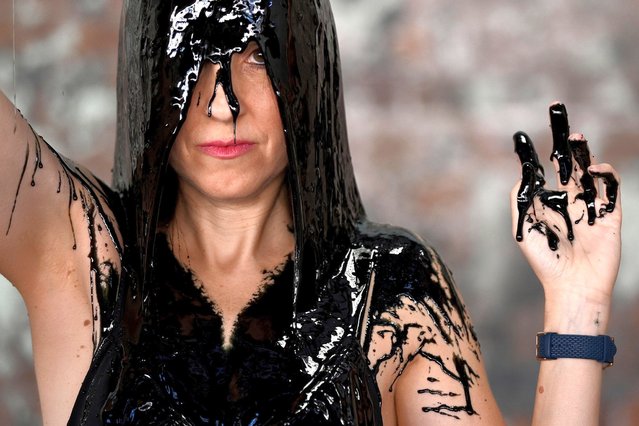 Supporters of the People for the Ethical Treatment of Animals (PETA) take part in a “Toxic Slime” protest during the 2021 Afterpay Australian Fashion Week, in Sydney, New South Wales, Australia, 31 May 2021. (Photo by Bianca de Marchi/EPA/EFE) 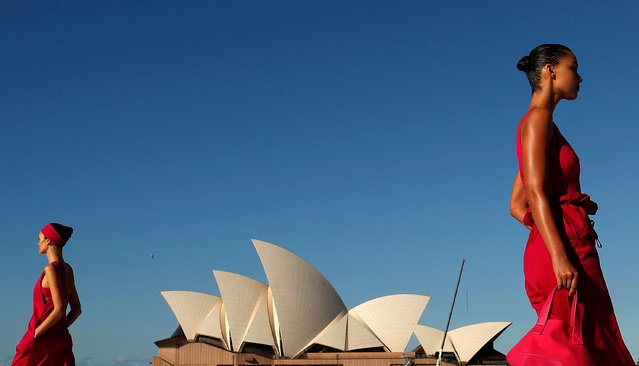 Models walk the runway during the “BONDI BORN” show during Afterpay Australian Fashion Week 2021 Resort '22 Collections at the Northern Wharf Boardwalk, Circular Quay, on May 31, 2021 in Sydney, Australia. (Photo by Mark Metcalfe/Getty Images) 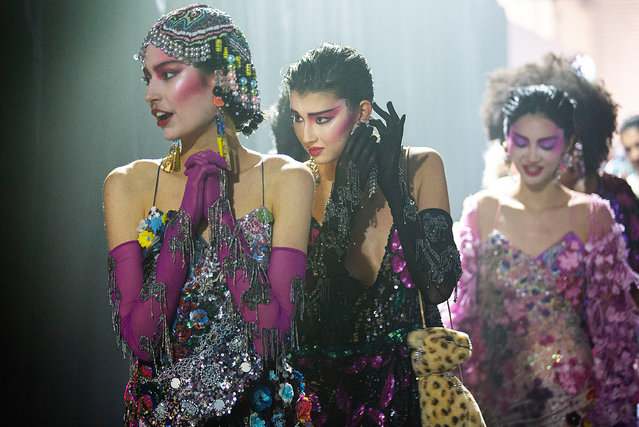