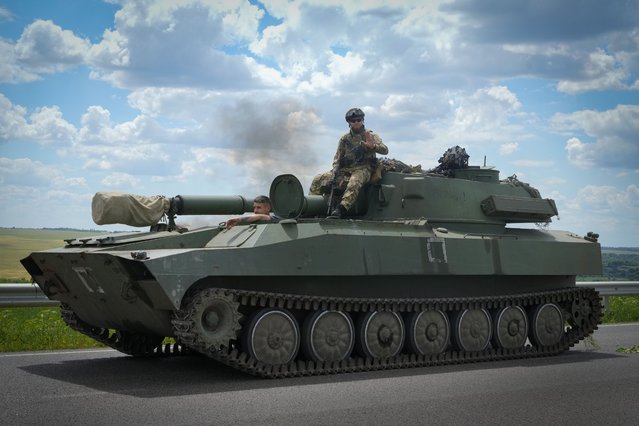 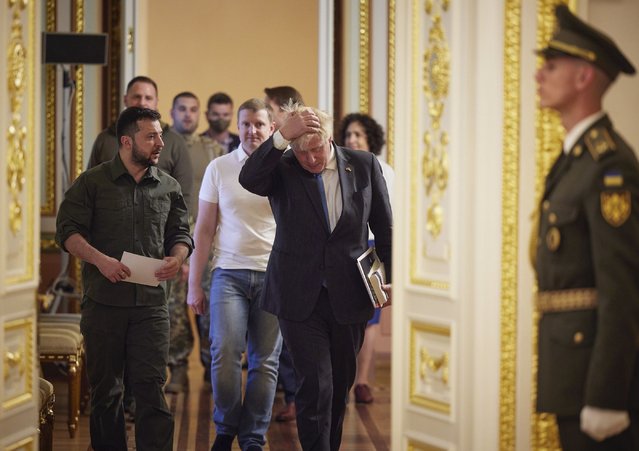 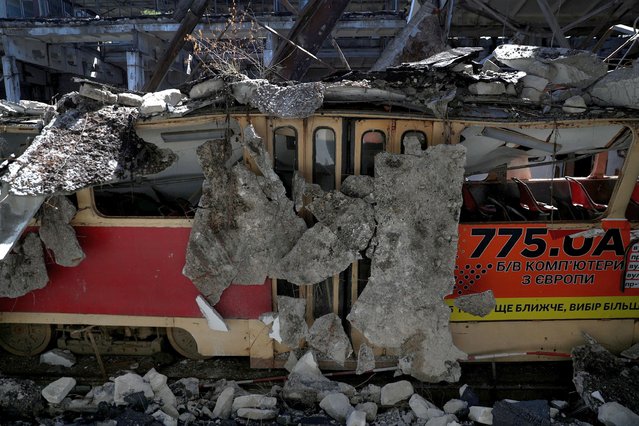 A damaged tram is pictured at a shelled tram depot in Kharkiv, amid Russia's attack on Ukraine on June 15, 2022. (Photo by Ivan Alvarado/Reuters) 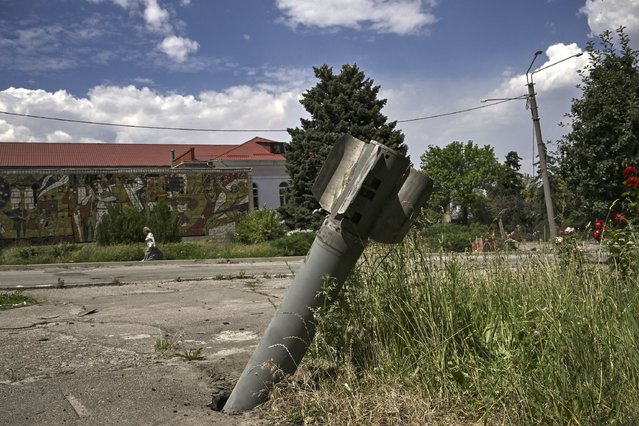 The tail of a rocket is nailed into a pavement in the city of Lysychansk at the eastern Ukrainian region of Donbas on June 17, 2022, as the Russian-Ukraine war enters its 114th day. (Photo by Aris Messinis/AFP Photo) 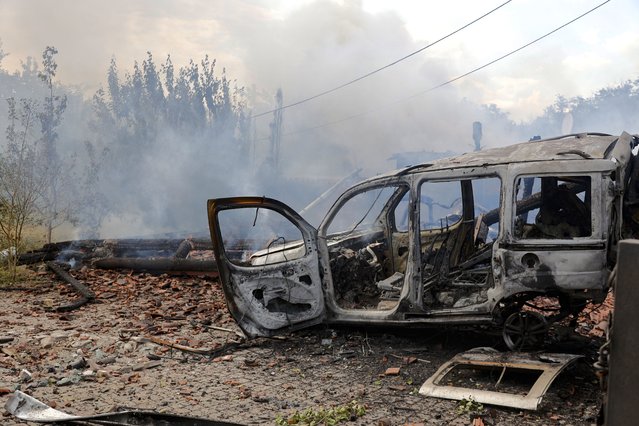 Smoke rises from the gutted remains of a vehicle and a house, background, following shelling in Donetsk, on the territory which is under the Government of the Donetsk People's Republic control, eastern Ukraine, Friday, June 17, 2022. (Photo by Alexei Alexandrov/AP Photo) 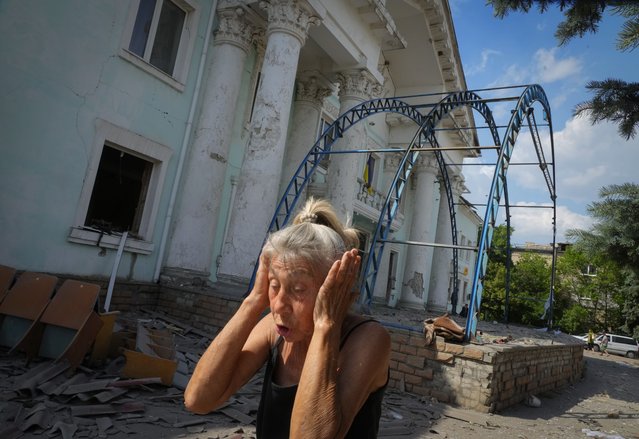 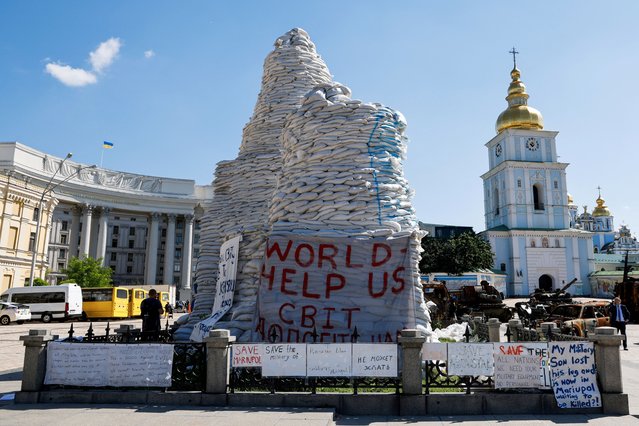 Pedestrians walk past banners reading “World – Help us” on sand bags which are covering and protecting the Monument to Princess Olga, St. Andrew the Apostle and the educators Cyril and Methodius during a trip of French President, German Chancellor and Italian Prime Minister in Kyiv, Ukraine, June 16, 2022. (Photo by Ludovic Marin/Pool via Reuters) 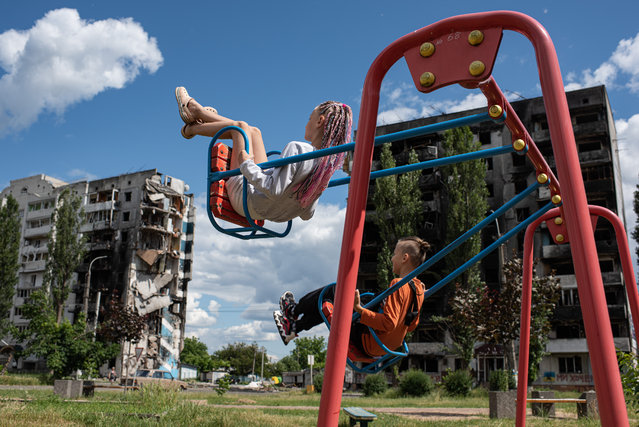 A girl and a boy swing on a swing next to a shelled apartment building on June 15, 2022 in Borodianka, Ukraine. The region around Ukraine's capital continues to recover from Russia's aborted assault on Kyiv, which turned many communities into battlefields. (Photo by Alexey Furman/Getty Images) 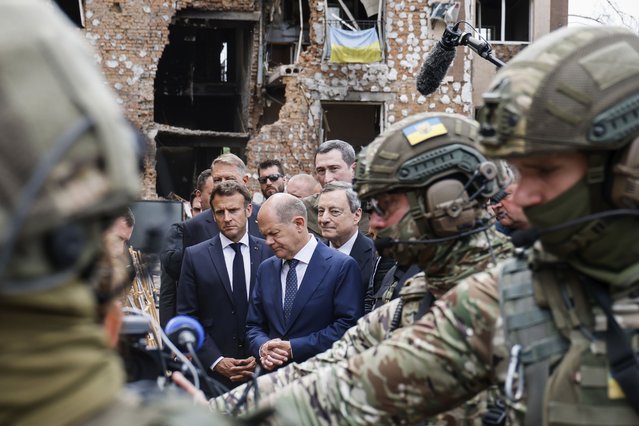 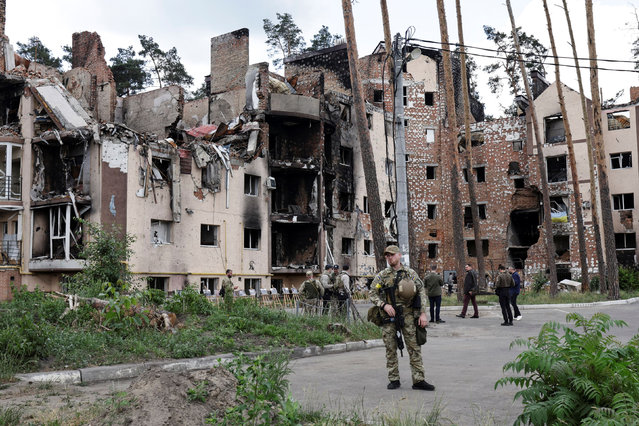 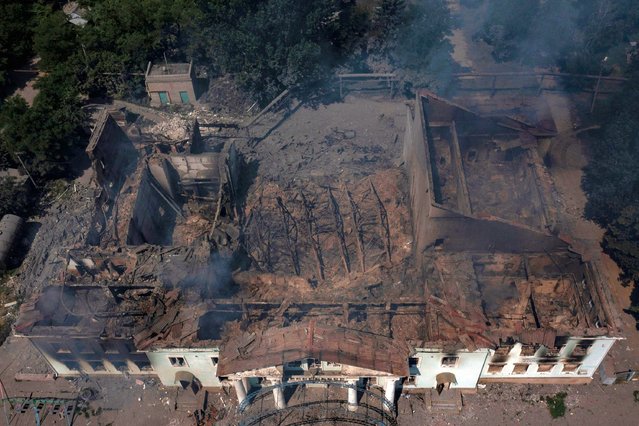 An aerial view shows the destroyed Community Art Center following a strike in the city of Lysychansk, in the eastern Ukrainian region of Donbas on June 17, 2022, as the Russian-Ukraine war enters its 114th day. (Photo by Aris Messinis/AFP Photo) 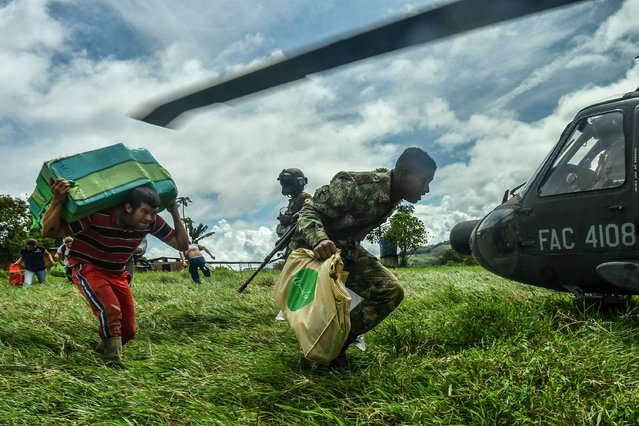 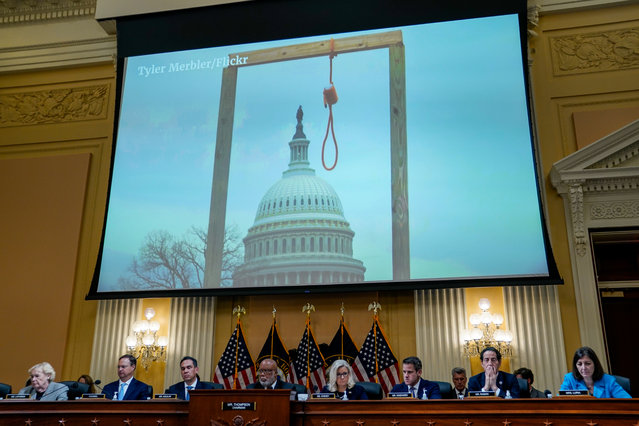 A photo of a gallows and noose is displayed on the screen, as the House Jan. 6 select committee holds its third public hearing on Capitol Hill on Thursday, June 16, 2022. (Photo by Jabin Botsford/The Washington Post) 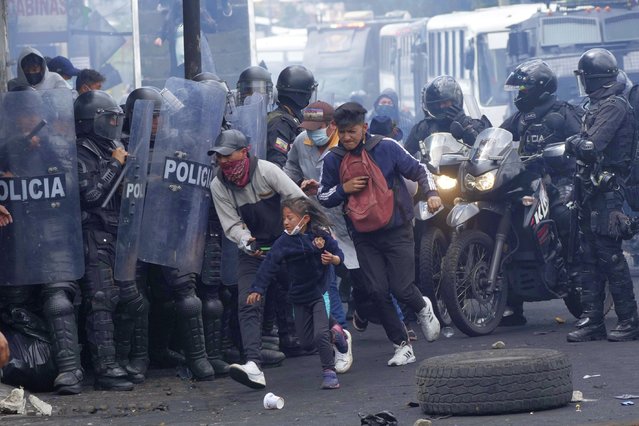 People run from tear gas fired by the police during protests against the economic policies of the government of Guillermo Lasso, in Quito, Ecuador, Thursday, June 16, 2022. (Photo by Dolores Ochoa/AP Photo) 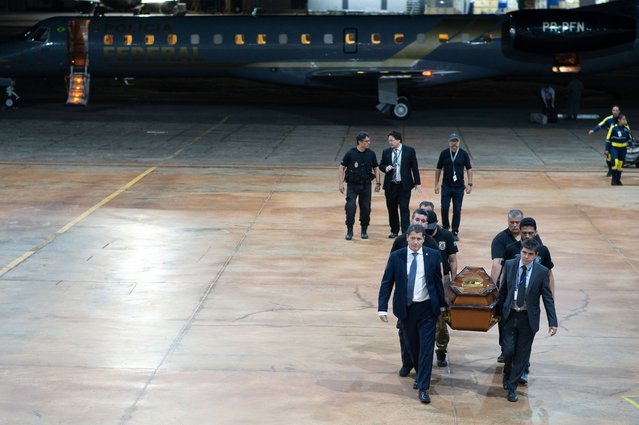 Members of the Brazilian police transport the casket carrying the recovered human remains from believed to be assassinated Indigenous affairs expert Bruno Pereira of Brazil and freelance reporter Dom Phillips of Great Britain as they arrive to Federal Police hangar at Juscelino Kubitschek International Airport on June 16, 2022 in Brasilia, Brazil. Phillips and Pereira, who were conducting research for a book on conservation efforts, both went missing on June 5 during a trip in the Javari Valley, in the far western part of the Amazonas state. On Wednesday 15, one of the suspects detained by the police admitted killing the pair. (Photo by Andressa Anholete/Getty Images) 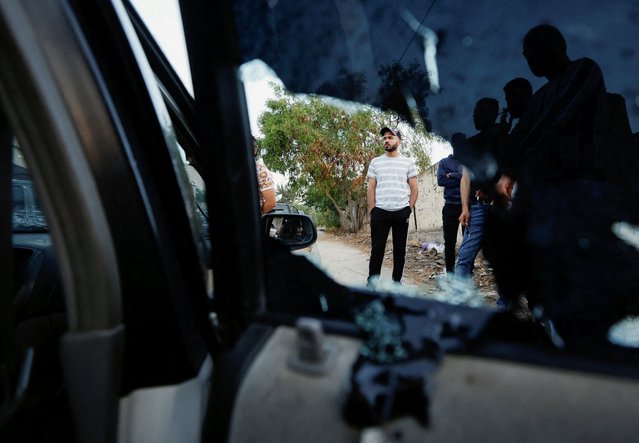 People stand next to a damaged vehicle following an Israeli raid in Jenin, in the Israeli-occupied West Bank on June 17, 2022. (Photo by Mohamad Torokman/Reuters) 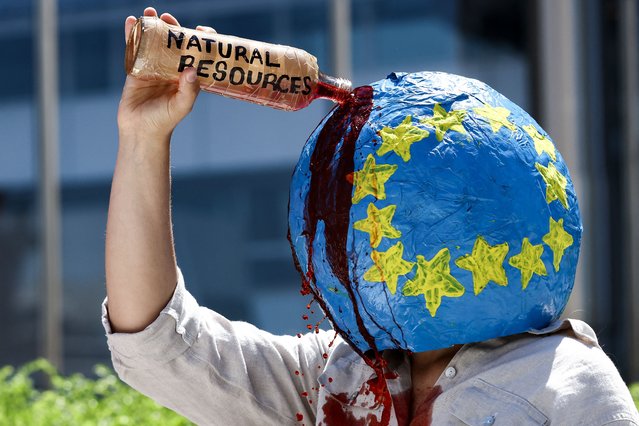 An activist from the climate change protest group Extinction Rebellion (XR) takes part in a protest to draw attention on missing UK journalist Dom Phillips and Brazilian Indigenous affairs specialist Bruno Pereira near the European Commission building in Brussel on June 16, 2022. Activists protest against the apparent killings of a British journalist and a Brazilian Indigenous expert in the Amazon, and urge stronger rules of deforestation-free products in the EU. (Photo by Kenzo Tribouillard/AFP Photo) 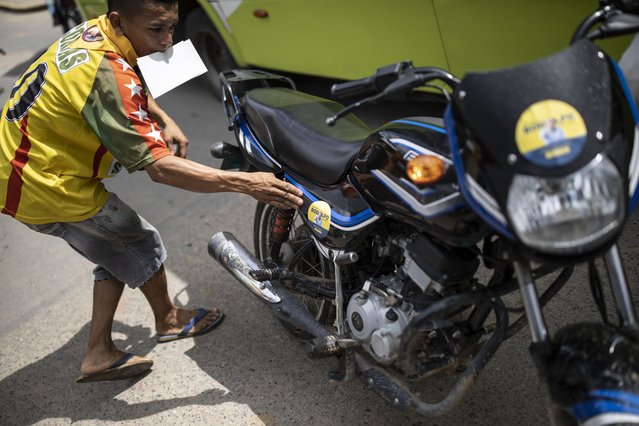 A supporter places on his motorbike stickers featuring presidential candidate Rodolfo Hernandez a day ahead of the country's presidential run-off, in Bucaramanga, Colombia, Saturday, June 18, 2022. Polls show rival Gustavo Petro and Hernandez, both former mayors, practically tied since advancing to the June 19th runoff following the first-round election in which they beat four other candidates. (Photo by Ivan Valencia/AP Photo) 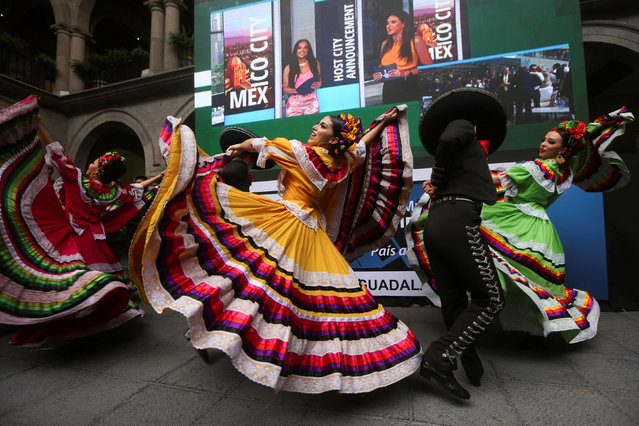 Traditional dancers perform during an event after the FIFA announced Guadalajara as one of the host cities for the 2026 World Cup which will be staged in the United States, Mexico and Canada, in Guadalajara, Mexico on June 16, 2022. (Photo by Fernando Carranza/Reuters) 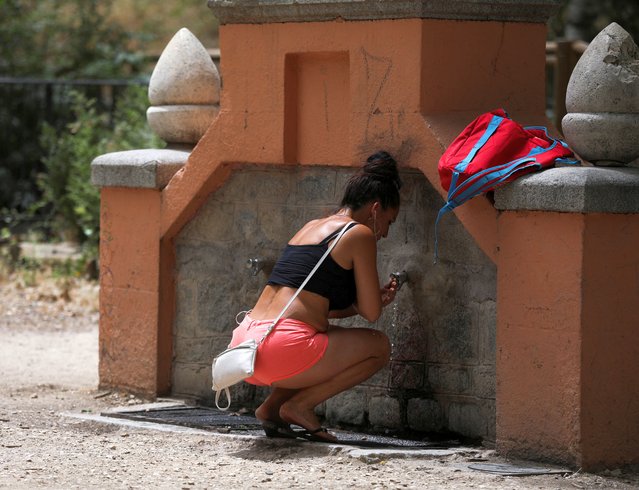