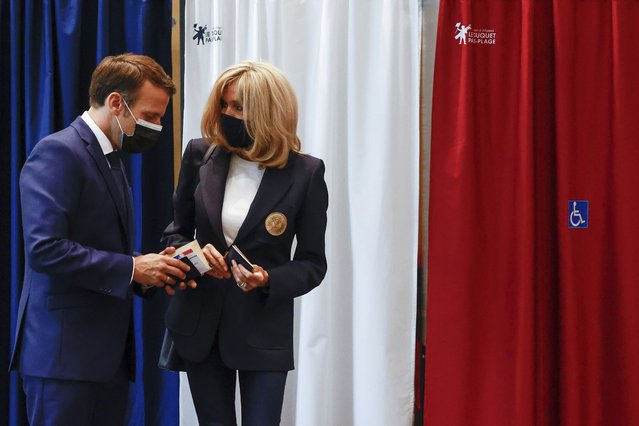 French President Emmanuel Macron chats with his wife Brigitte during the first round of French regional and departmental elections, in Le Touquet-Paris-Plage, northern France, Sunday, June 20, 2021. The elections for leadership councils of France's 13 regions, from Brittany to Burgundy to the French Riviera, are primarily about local issues like transportation, schools and infrastructure. But leading politicians are using them as a platform to test ideas and win followers ahead of the April presidential election. (Photo by Christian Hartmann/Pool via AP Photo) 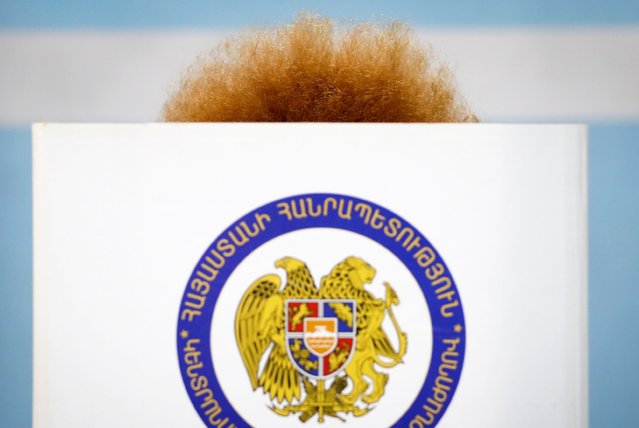 An Armenian woman reads her ballot papers at a polling station during a parliamentary election in Yerevan, Armenia, Sunday, June 20, 2021. Armenians are voting in a national election after months of tensions over last year's defeat in fighting against Azerbaijan over the separatist region of Nagorno-Karabakh. (Photo by Sergei Grits/AP Photo) 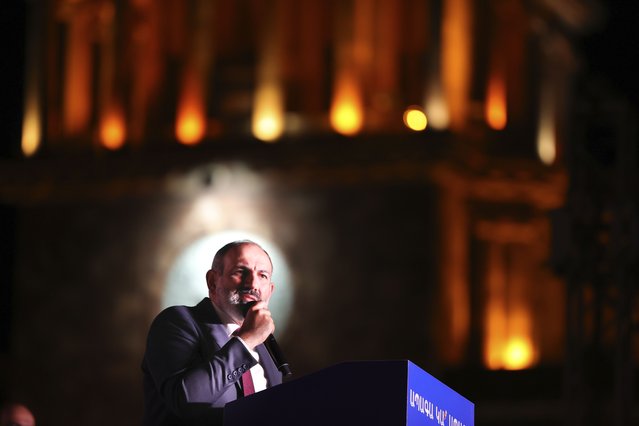 Armenian acting Prime Minister Nikol Pashinyan speaks during a rally in his support after winning snap parliamentary elections in Yerevan, Armenia, Monday, June 21, 2021. Voting results show that the party of Armenia's acting Prime Minister Nikol Pashinyan has won snap parliamentary elections which he called to ease anger over a peace deal he signed with Azerbaijan. The election commission said Pashinyan's Civil Contract party won 53.9% of the vote. Former President Robert Kocharyan's bloc was a distant second with about 21%. (Photo by Tigran Mehrabyan/PAN Photo via AP Photo) 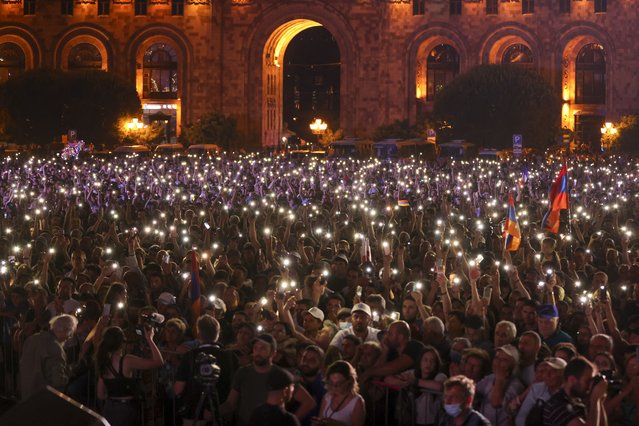 Supporters of Armenian acting Prime Minister Nikol Pashinyan hold up their phones during a rally in his support after winning snap parliamentary elections in Yerevan, Armenia, Monday, June 21, 2021. (Photo by Tigran Mehrabyan/PAN Photo via AP Photo) 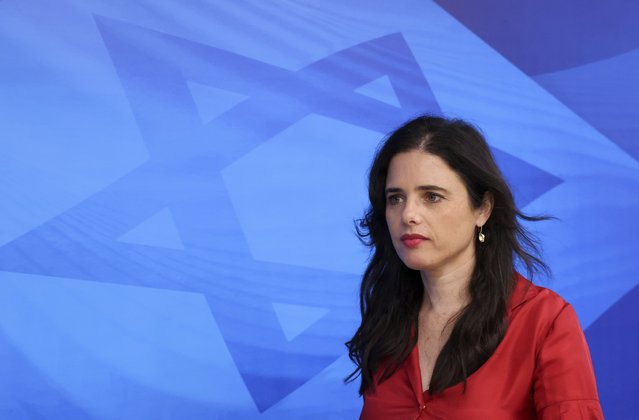 Israeli Minister of Interior Ayelet Shaked arrives for the first weekly cabinet meeting of the new government in Jerusalem, Sunday, June 20, 2021. Prime Minister Naftali Bennett opened his first Cabinet meeting on Sunday since swearing in his new coalition government with a condemnation of the newly elected Iranian president, whom he called “the hangman of Tehran”. (Photo byu Emmanuel Dunand/Pool Photo via AP Photo) 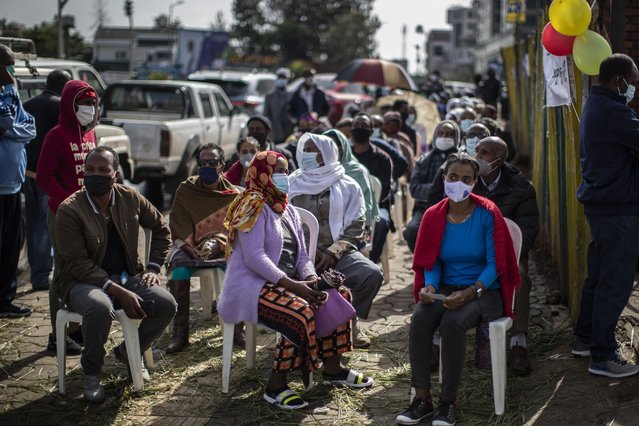 Ethiopians queue on chairs in the street as they wait to cast their votes in the general election at a polling center in the capital Addis Ababa, Ethiopia, Monday, June 21, 2021. Ethiopia was voting Monday in the greatest electoral test yet for Prime Minister Abiy Ahmed as insecurity and logistical issues meant ballots wouldn't be cast in more than 100 constituencies of the 547 across the country. (Photo by Ben Curtis/AP Photo) 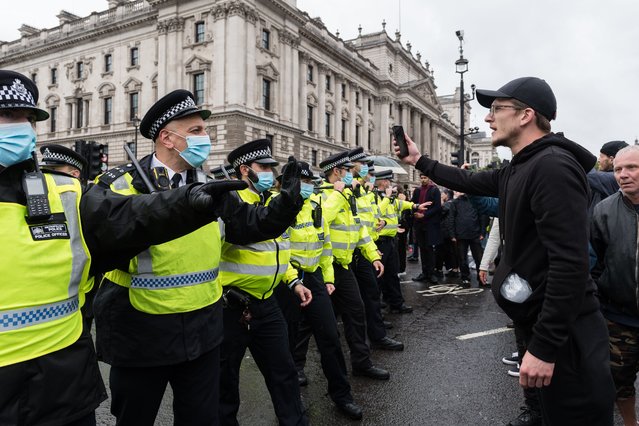 Police officers secure the area outside Houses of Parliament during a protest against lockdown restrictions and Covid-19 vaccines in London, United Kingdom on June 21, 2021. Today was meant to mark final lifting of coronavirus restrictions on social contact dubbed “freedom day” in England, however this has been delayed by four weeks in an effort to tackle the rise of infections caused by the Delta variant and accelerate the vaccination drive. (Photo by Wiktor Szymanowicz/Anadolu Agency via Getty Images) 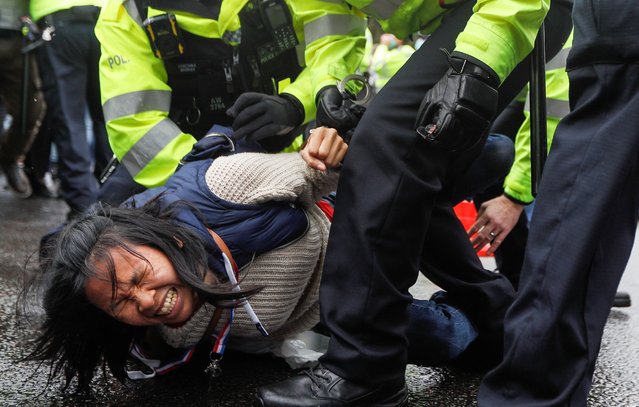 An anti-vaccine demonstrator is detained by police officers during a protest in Westminster, amid the coronavirus disease (COVID-19) pandemic, London, Britain, June 21, 2021. (Photo by Peter Nicholls/Reuters) 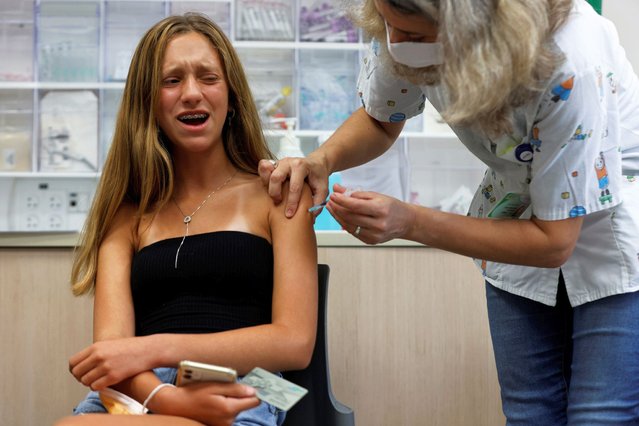 A teenager reacts while receiving a dose of a vaccine against the coronavirus disease (COVID-19) as Israel urged more 12- to 15-year-olds to be vaccinated, citing new outbreaks attributed to the more infectious Delta variant, at a Clalit healthcare maintenance organisation in Tel Aviv, Israel on June 21, 2021. (Photo by Amir Cohen/Reuters) 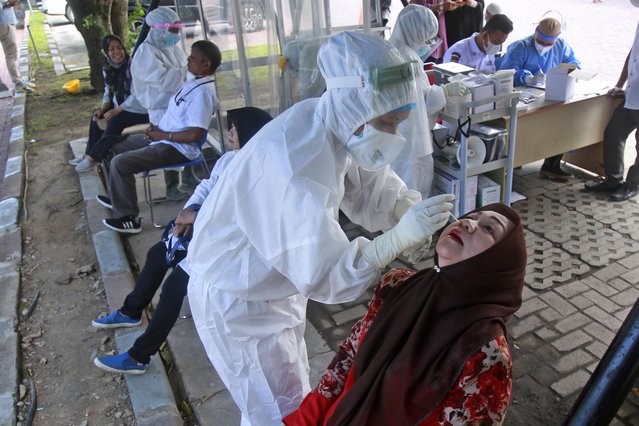 A medical workers collect nasal swab samples from a woman to be tested for coronavirus during a COVID-19 screening at University of North Sumatra in Medan, Indonesia, Monday, June 21, 2021. Indonesia has reported more coronavirus cases than any other country in Southeast Asia. (Photo by Binsar Bakkara/AP Photo) 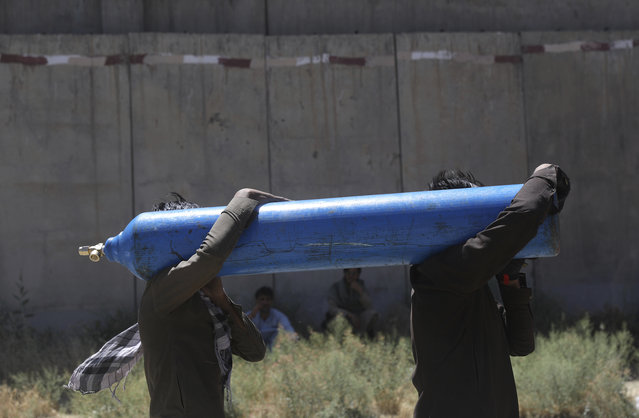 Men carry a cylinder to be refilled from a privately-owned oxygen factory, in Kabul, Afghanistan, Saturday, June 19, 2021. Health officials say Afghanistan is fast running out of oxygen as a deadly third surge of COVID worsens. (Photo by Rahmat Gul/AP Photo) 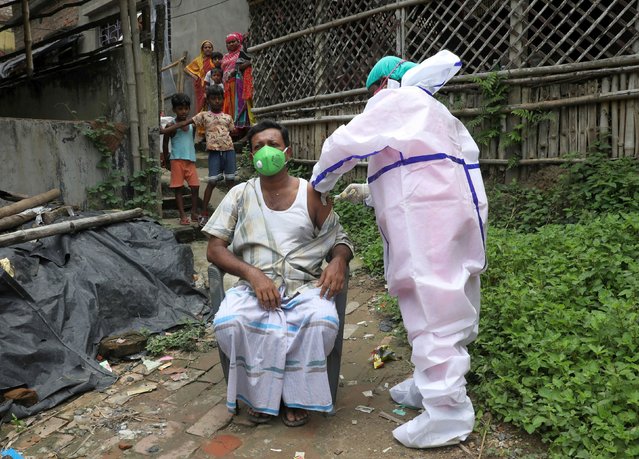 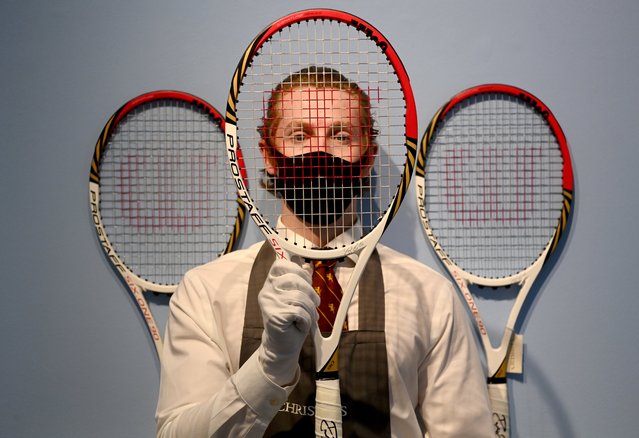 A Christie's employee poses with Swiss tennis Roger Federer's racket used at the London Olympics 2012 at the Christie's auction house, in London, Britain, 21 June 2021. An online auction of parts of the Swiss tennis player's equipment from various international tennis tournaments will take place from 23 June until 14 July to raise funds for the “Roger Federer Foundation”. (Photo by Facundo Arrizabalaga/EPA/EFE) 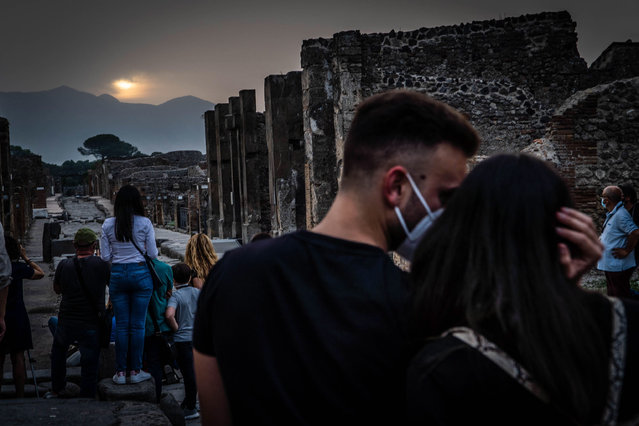 People observe the sunrise on the day of the summer solstice, in Pompei, near Naples, southern Italy, 21 June 2021. The archeological site's extraordinary opening at 4:45 am on the day allowed visitors to see the sunrise aligned with a network of streets in Pompeii. (Photo by Cesare Abbate/EPA/EFE) 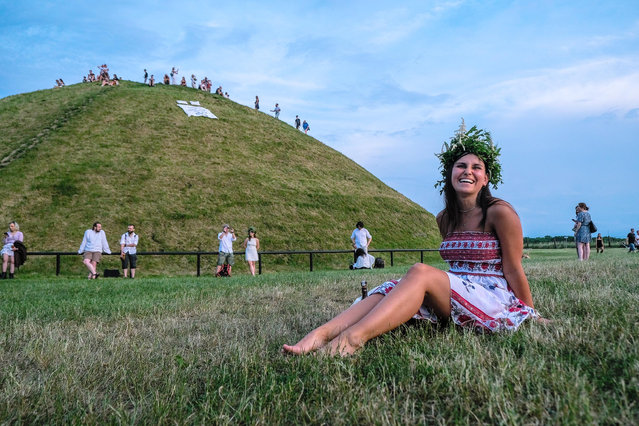 A woman wears a flower crown during a Summer Solstice celebration on June 21, 2021 in Krakow, Poland. The summer solstice represents the longest day of the year, with the most hours of sunlight, and is celebrated by various cultures worldwide. (Photo by Omar Marques/Getty Images) 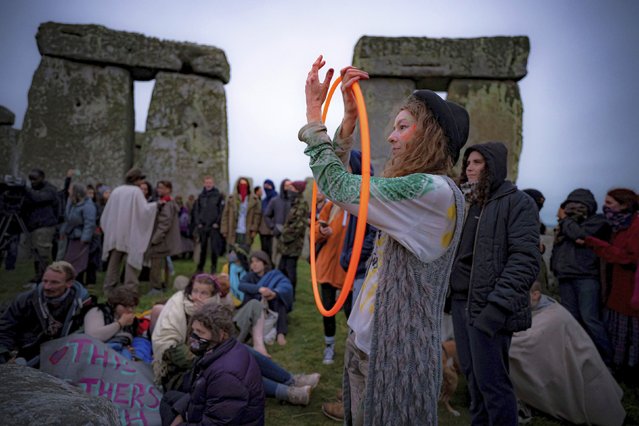 People inside the stone circle during Summer Solstice at Stonehenge, where some people jumped over the fence to enter the stone-circle to watch the sun rise at dawn of the longest day of the year in the UK, in Amesbury, England, Monday June 21, 2021. The prehistoric monument of ancient stones have been officially closed for the celebrations due to the coronavirus lockdown, but groups of people ignored the lockdown to mark the Solstice, watched by low key security. (Photo by Ben Birchall/PA Wire via AP Photo) 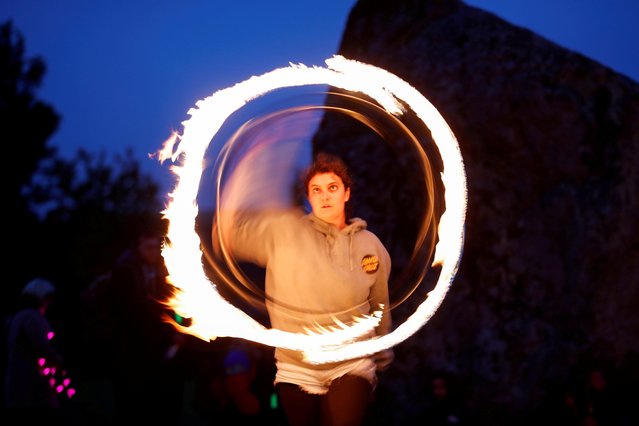 A person performs with fire during the celebration of the Summer Solstice, despite official events being cancelled amid the spread of the coronavirus disease (COVID-19), in Avebury, Britain, June 21, 2021. Picture taken with long exposure. (Photo by Andrew Boyers/Reuters) 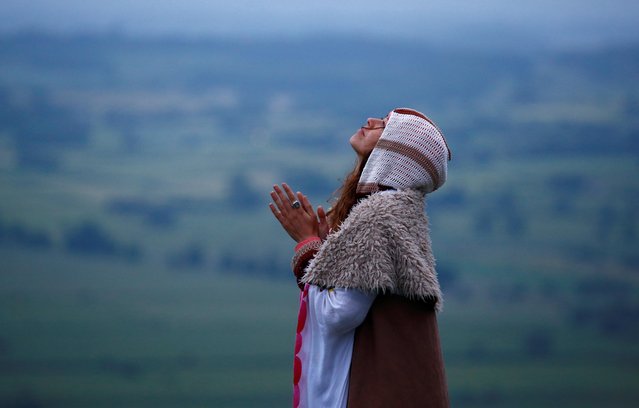 A woman observes the summer solstice, the day where the northern hemisphere receives the most daylight of the year, on Glastonbury Tor, Glastonbury, Britain, June 21, 2021. (Photo by Peter Cziborra/Reuters) 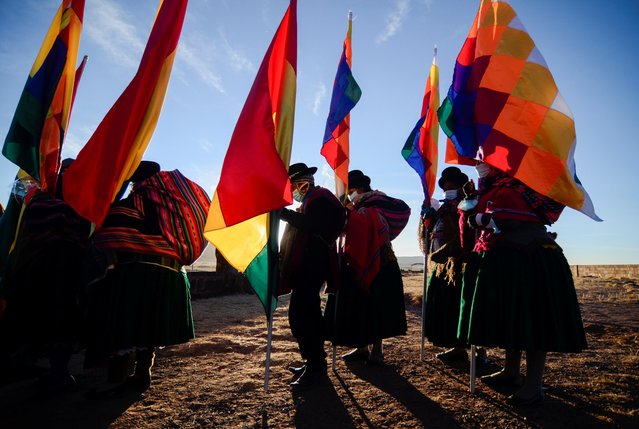 People attend an ancestral ceremony to ring in the Aymara New Year, in Tiwanaku, Bolivia on June 21, 2021. (Photo by Claudia Morales/Reuters) 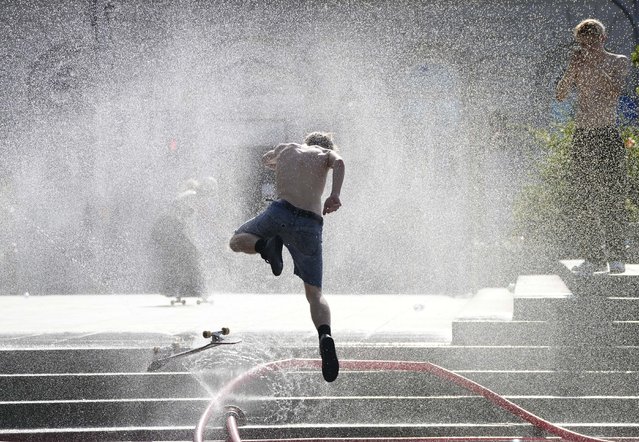 Youngsters play in water fountains that have been put up to help people fight the extreme heat of up to 35 degrees Celsius (95 F) that has been gripping Poland for five days, in Warsaw, Poland, Monday, June 21, 2021. (Photo by Czarek Sokolowski/AP Photo)
Edit Del
22 Jun 2021 08:05:00, post received 0 comments
Publication archive:
←   →
Popular tags:
All tags
Last searches: