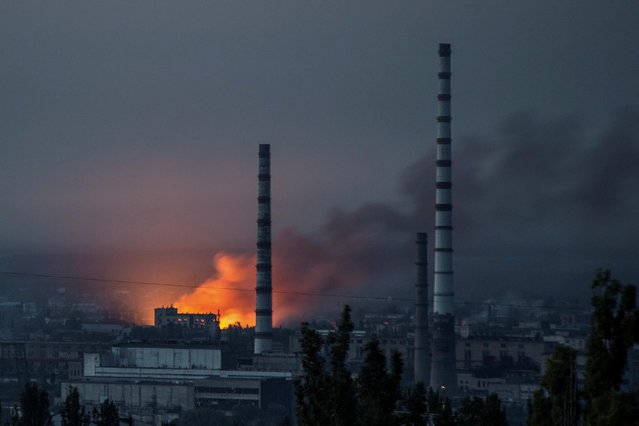 Smoke and flame rise after a military strike on a compound of Sievierodonetsk's Azot Chemical Plant, as Russia's attack on Ukraine continues, in Lysychansk, Luhansk region, Ukraine on June 18, 2022. (Photo by Oleksandr Ratushniak/Reuters) 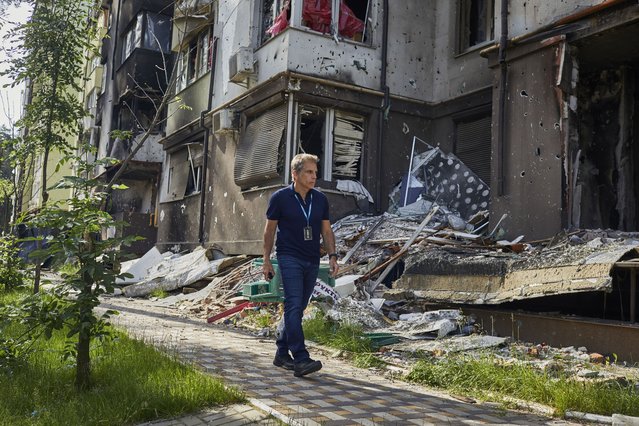 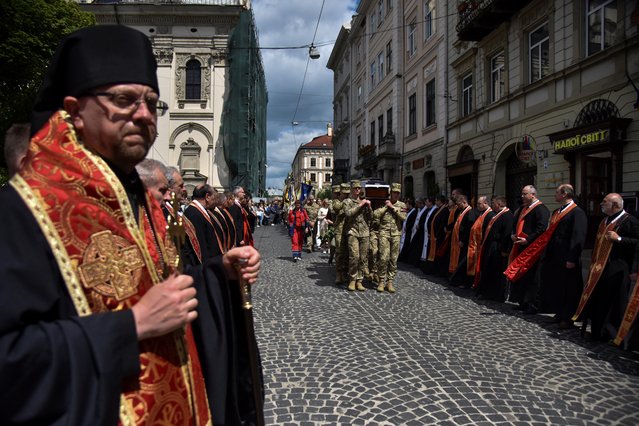 Ukrainian servicemen carry a coffin with the body of their comrade Artem Dymyd, who was recently killed in a battle against Russian troops, as Russia's attack on Ukraine continues, during a funeral ceremony in Lviv, Ukraine on June 21, 2022. (Photo by Pavlo Palamarchuk/Reuters) 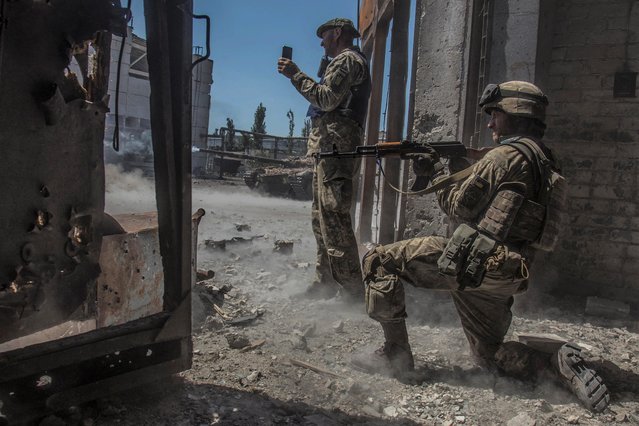 Ukrainian service members watch while a tank fires toward Russian troops in the industrial area of the city of Sievierodonetsk, as Russia's attack on Ukraine continues, Ukraine on June 20, 2022. (Photo by Oleksandr Ratushniak/Reuters) 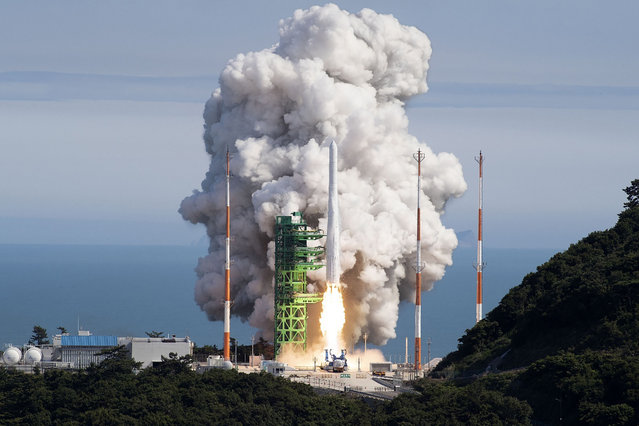 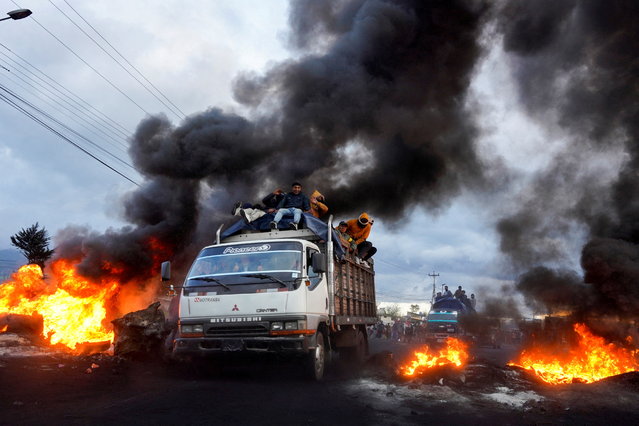 Indigenous demonstrators drive past burning road blockades while heading towards the capital Quito after a week of protests against the economic and social policies of President Guillermo Lasso, in Machachi, Ecuador on June 20, 2022. (Photo by Johanna Alarcon/Reuters) 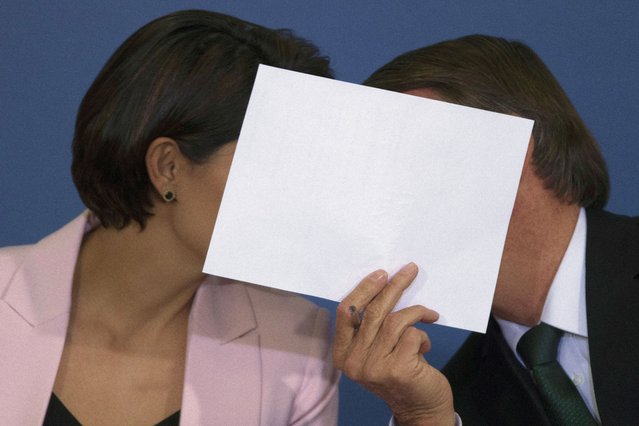 The President of Brazil Jair Bolsonaro (R), and the First Lady Michelle Bolsonaro (L), speak to each other, while participating in an act of National Policy for the Recovery of Learning in Basic Education and the MECPlace – Innovation Ecosystem and Digital Educational Solutions, at the Palacio do Planalto in Brasilia, Brazil, 20 June 2022. (Photo by Joedson Alves/EPA/EFE) 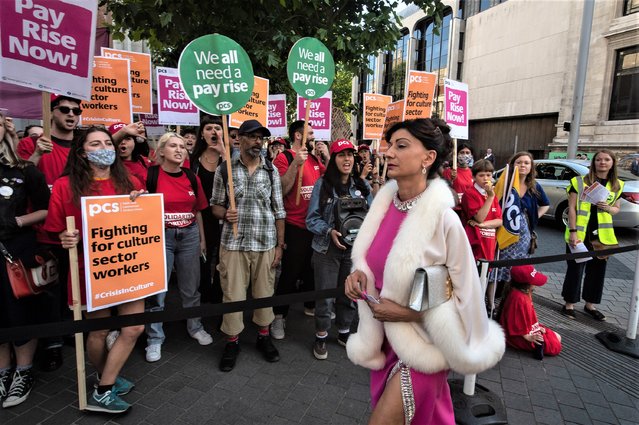 Conservative party donors run the gauntlet of booing protestors as members of the PCS Trade Union whom work in the culture sector protest at The V&A against the building being used for a Conservative Party fundraiser on June 20, 2022 in London, England. The Public and Commercial Services Union (PCS) is made up of Government workers including civil servants. Earlier in the Spring, Boris Johnson announced 91,000 job cuts across the civil service with Secretaries of state asked to prepare plans for redundancies across their departments by 30 June. (Photo by Guy Smallman/Getty images) 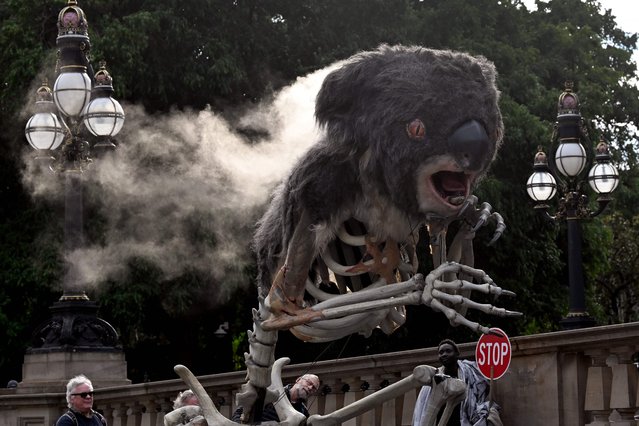 “Blinky”, a giant burning part-skeleton, part-koala creation, is wheeled down a street outside the Victoria state parliament during a protest in Melbourne on June 21, 2022. Members of environmental groups gathered to call on MPs to reject proposed new laws that include harsh penalties for citizens who enter logging sites to protest. (Photo by William West/AFP Photo) 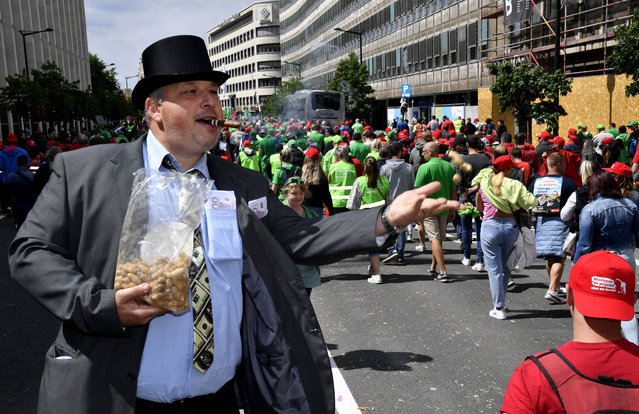 A man wearing a top hat throws peanuts as he marches with trade unions during a demonstration to protest against the rising cost of living in Brussels, Monday, June 20, 2022. (Photo by Geert Vanden Wijngaert/AP Photo) 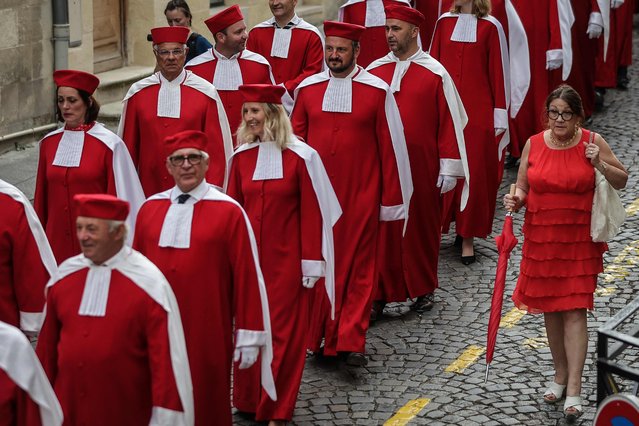 Members of the “Jurade of Saint-Emilion”, wearing red caps and robes decorated with white ermine, walk through the streets of Saint-Emilion, before an induction ceremony of the brotherhood ahead of Bordeaux' Wine Week on June 19, 2022. Founded 800 years ago and revived in 1948, the Jurade preserves the memory of Saint-Émilion wines and promotes them all over the world. (Photo by Thibaud Moritz/AFP Photo) 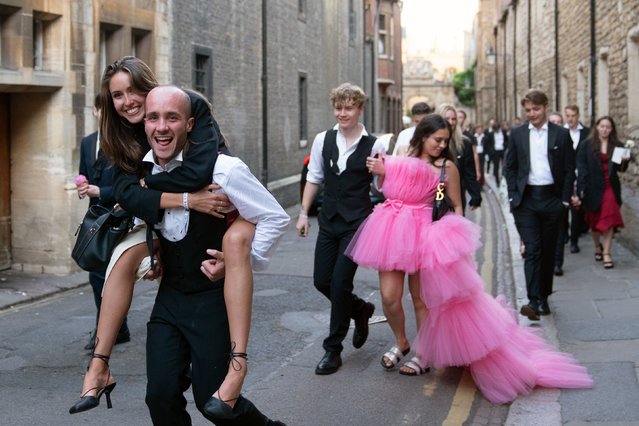 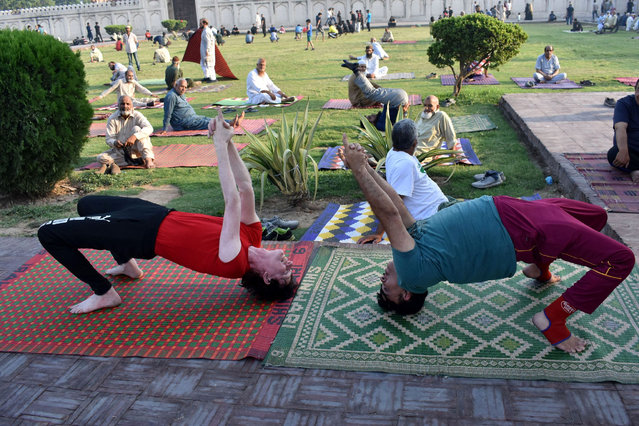 Participants take part in a yoga performance in Lahore, Pakistan, on June 20, 2022. The International Day of Yoga is celebrated annually on June 21. (Photo by Xinhua News Agency/Rex Features/Shutterstock) 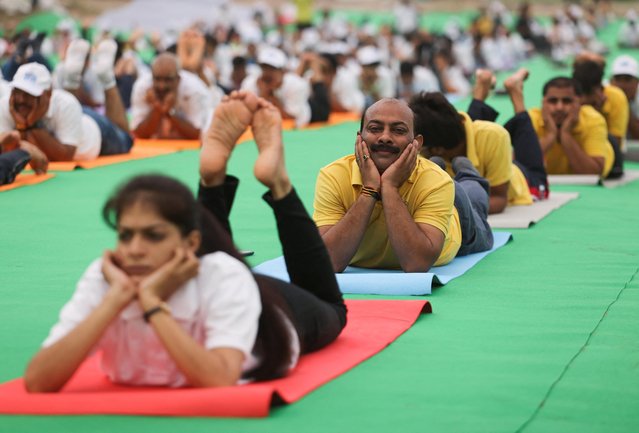 People perform yoga on the banks of the river Yamuna, during International Yoga Day in New Delhi, India, June 21, 2022. (Photo by Anushree Fadnavis/Reuters) 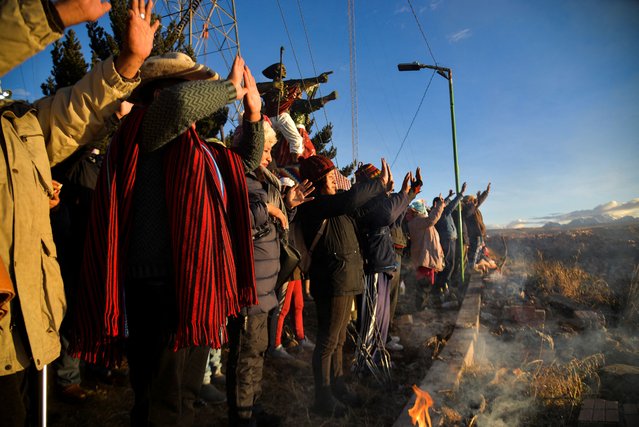 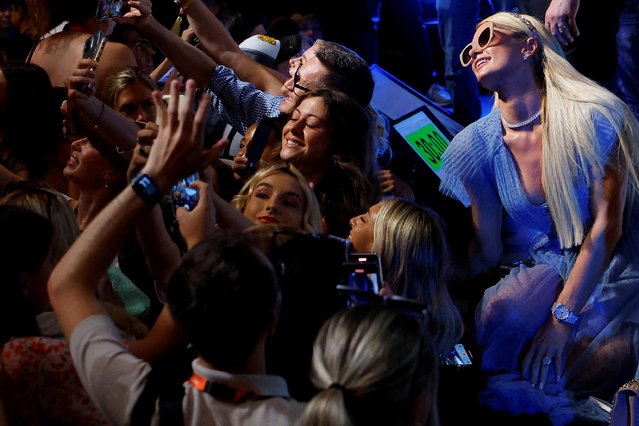 Paris Hilton, Chairwoman and CEO of global media content company and platform 11:11 Media, poses with fans during a conference at the Cannes Lions International Festival of Creativity in Cannes, France, June 21, 2022. (Photo by Eric Gaillard/Reuters) 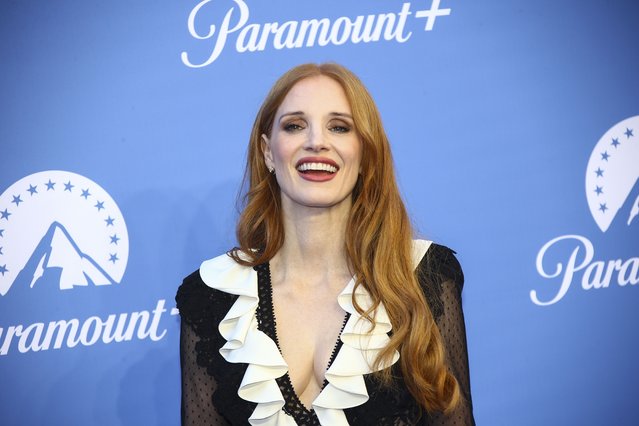 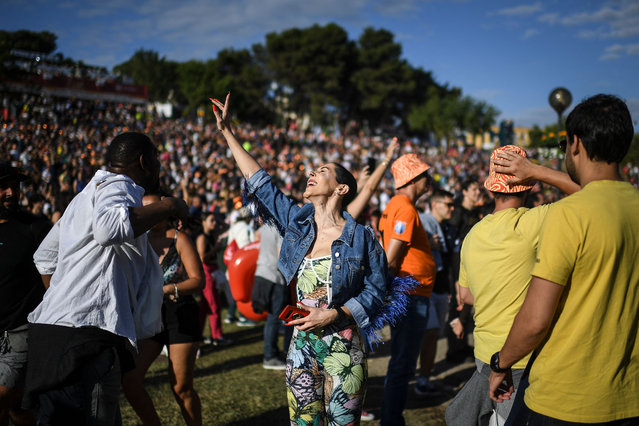 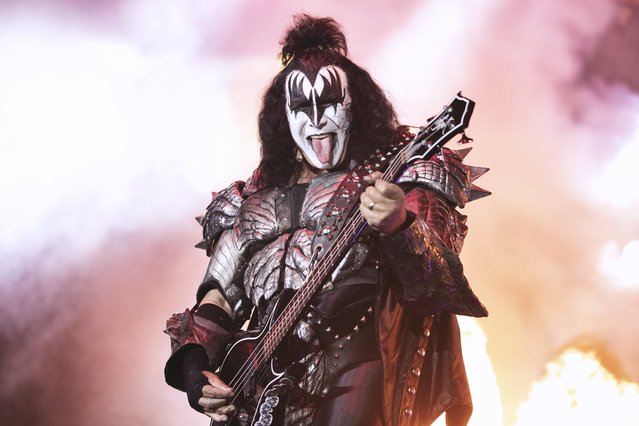 Gene Simmons of rock band KISS performs during the End Of The Road -tour in Helsinki, Finland on June 20, 2022. (Photo by Roni Rekomaa/Rex Features/Shutterstock) 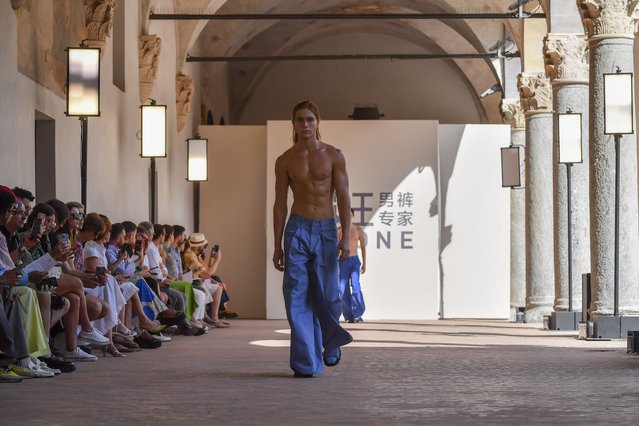 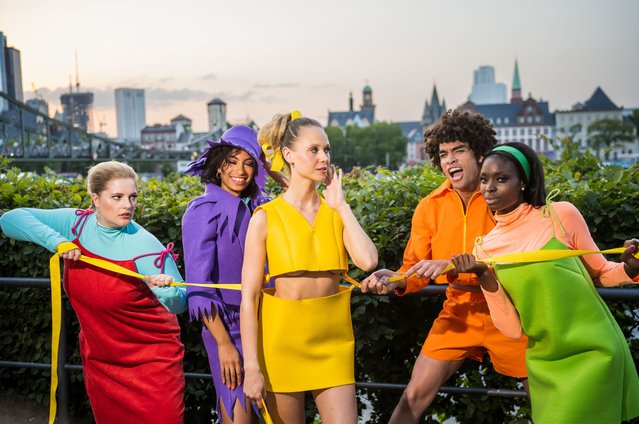 Models pose for a photo while they wait for the catwalk on the bridge “Eiserner Steg” at the Samuel Gärtner Fashion Show during the Frankfurt Fashion Week June 2022 on June 19, 2022 in Frankfurt am Main, Germany. (Photo by Thomas Lohnes/Getty Images)
Edit Del
22 Jun 2022 04:42:00, post received 0 comments
Publication archive:
←   →
Popular tags:
All tags
Last searches: