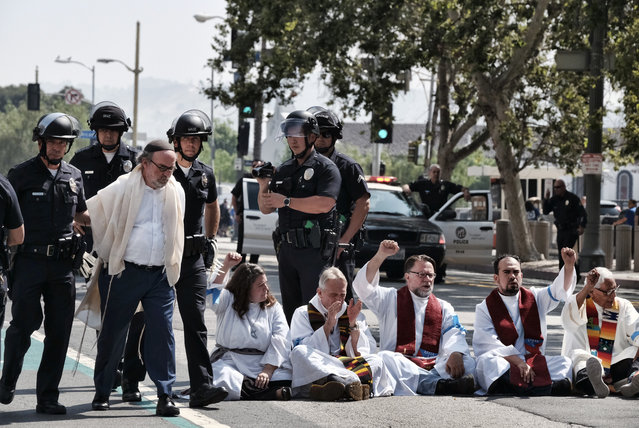 A member of clergy group, left, is arrested during a protest in front of Federal Courthouse in Los Angeles on Tuesday, June 26, 2018. Immigrant-rights advocates asked a federal judge to order the release of parents separated from their children at the border, as demonstrators decrying the Trump administration's immigration crackdown were arrested Tuesday at a rally ahead of a Los Angeles appearance by Attorney General Jeff Sessions. (Photo by Richard Vogel/AP Photo) 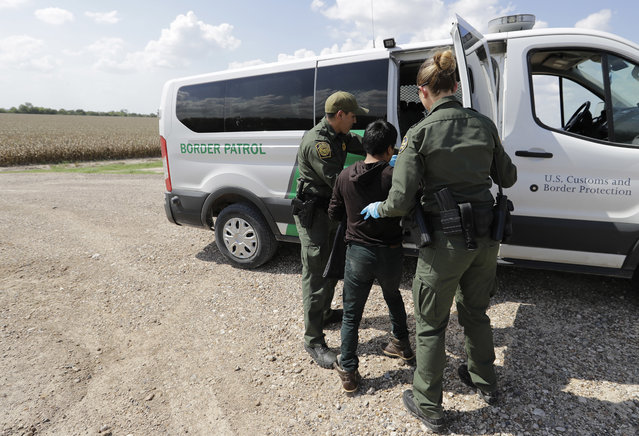 U.S. Border Patrol agents load a migrant from Guatemala into a van after he was caught trying to enter the United States illegally, Monday, June 25, 2018, in Hidalgo, Texas. (Photo by David J. Phillip/AP Photo) 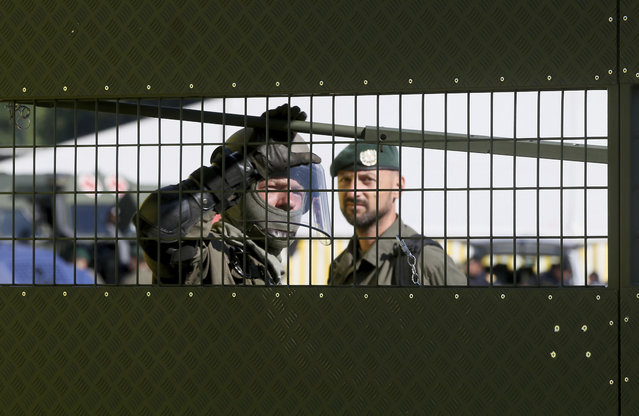 Austrian army practice the protection of the border between Slovenia and Austria in Spielfeld, Austria, Tuesday, June 26, 2018. (Photo by Ronald Zak/AP Photo) 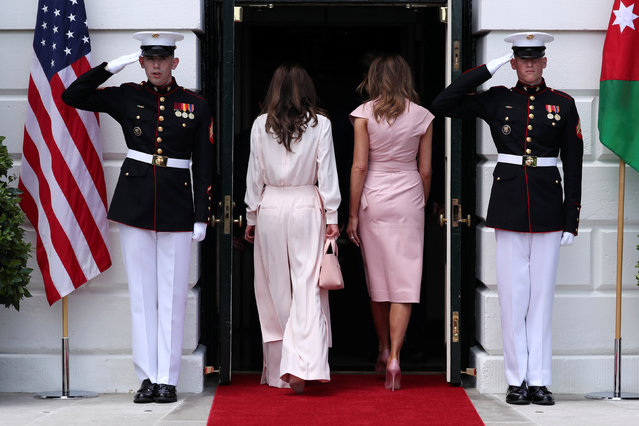 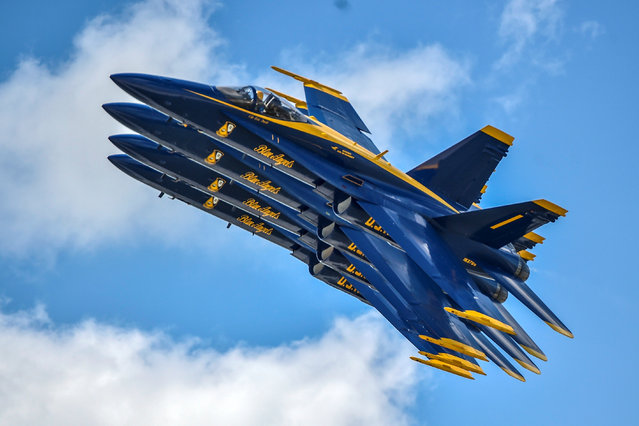 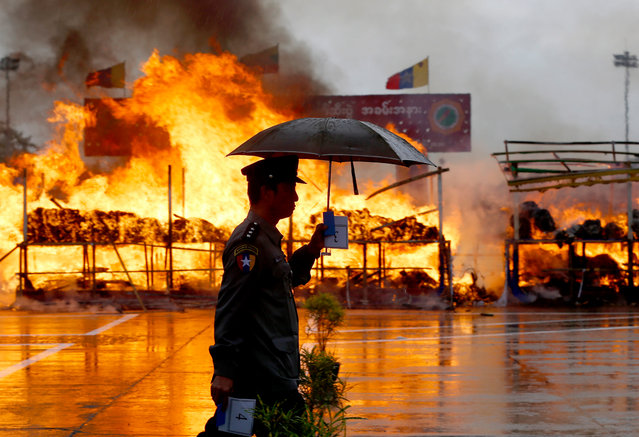 Myanmar police officer walks past near a pile of illegal drugs burning during a “Destruction Ceremony of Seized Narcotic Drugs”, held to mark the International Day against Drug Abuse in Yangon, Myanmar, 26 June 2018. Myanmar authorities destroyed an assortment of drugs worth some 184.98 million US dollar in Yangon, Mandalay and Taunggyi. (Photo by Nyein Chan Naing/EPA/EFE) 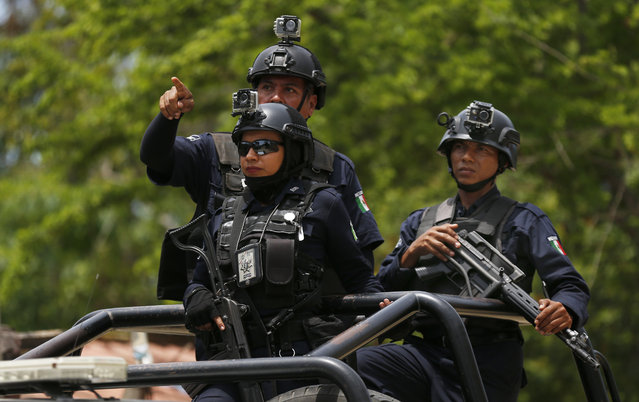 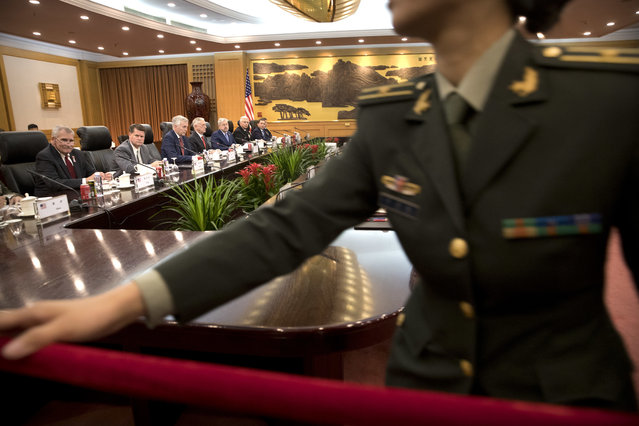 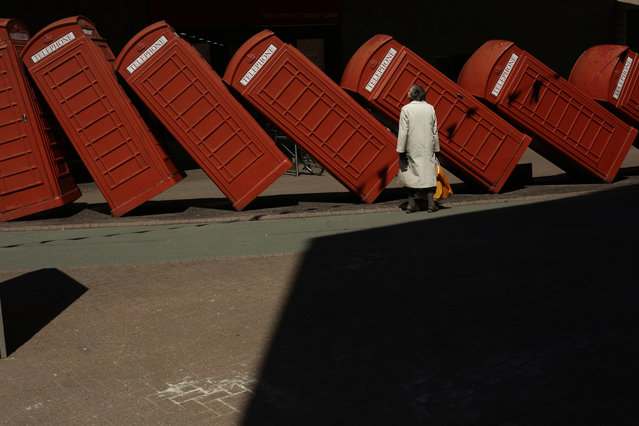 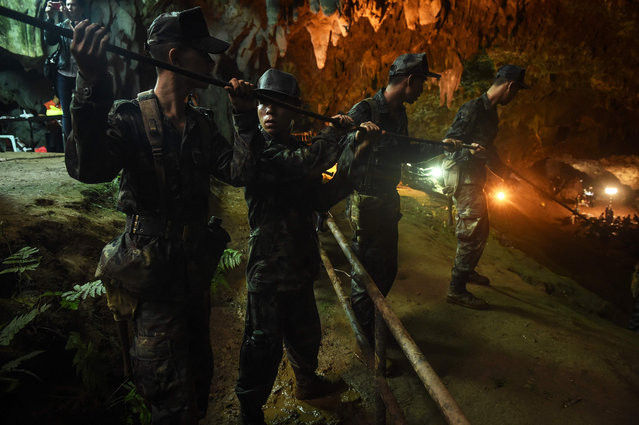 Thai soldiers relay electric cable deep into the Tham Luang cave at the Khun Nam Nang Non Forest Park in Chiang Rai on June 26, 2018 during a rescue operation for a missing children' s football team and their coach. Desperate parents led a prayer ceremony outside a flooded cave in northern Thailand where 12 children and their football coach have been trapped for days, as military rescue divers packing food rations resumed their search on June 26. (Photo by Lillian Suwanrumpha/AFP Photo) 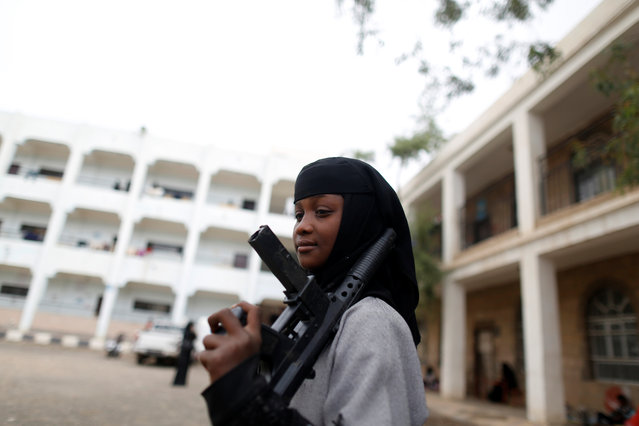 A girl displaced by the fighting in the Red Sea port city of Hodeidah holds a toy rifle at a school where IDPs live in Sanaa, Yemen on June 26, 2018. (Photo by Khaled Abdullah/Reuters) 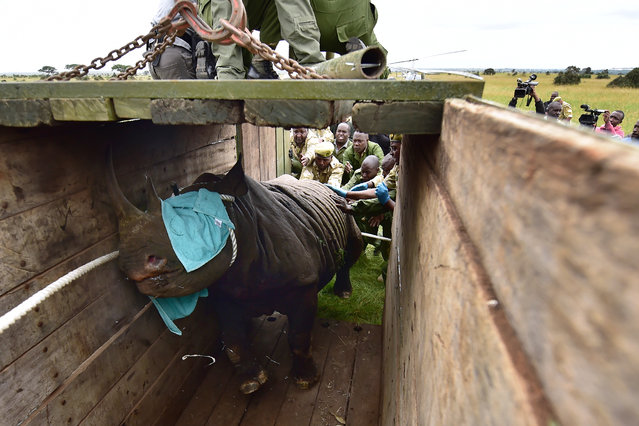 Kenya Wildlife Services (KWS) translocation team members assist to load a black male rhinoceros into a transport crate as one of three individuals about to be translocated, in Nairobi National Park, on June 26, 2018. Kenya Wildlife Services proceeded to relocate some rhinoceroses on June 26, 2018 from Nairobi National Park to Tsavo-East National Park in an effort to repopulate habitat around the country which rhinoceros population had been decimated by poaching and harsh climatic changes. (Photo by Tony Karumba/AFP Photo) 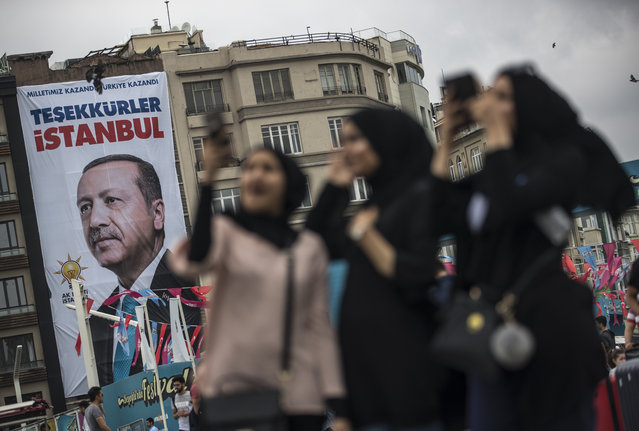 Muslim tourists pose in front of the poster of Turkish President Recep Tayyip Erdogan which reads, “Thank you Istanbul” at Taksim Square in Istanbul, Turkey, 26 June 2018. Turkish Electoral Commission on 26 June announced Recep Tayyip Erdogan has won the presidential elections. In the parliamentary elections, which were held at the same time as the presidential elections, although the Justice and Development Party (AKP) won with 42.5 percent of the votes, it lost the absolute majority which the party had secured in the parliament since 2002. (Photo by Sedat Suna/EPA/EFE) 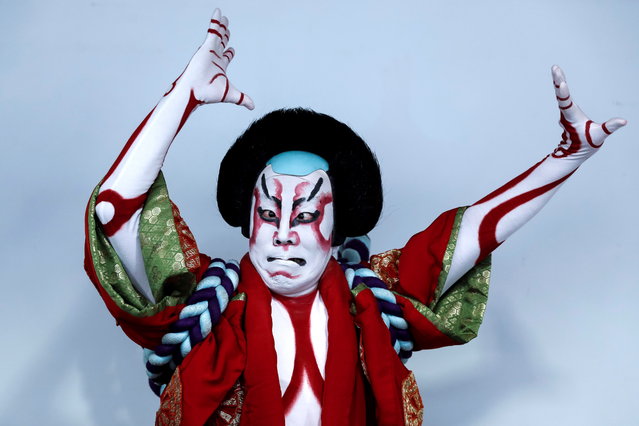 One of the actors of the “Heisei Nakamuraza” Japanese kabuki theater company poses for a picture at the Canal Theater in Madrid, Spain, 25 June 2018. The company will perform in Spain for the first time on occasion of the 150 anniversary of Spain's bilateral ties with Japan. (Photo by Emilio Naranjo/EPA/EFE) 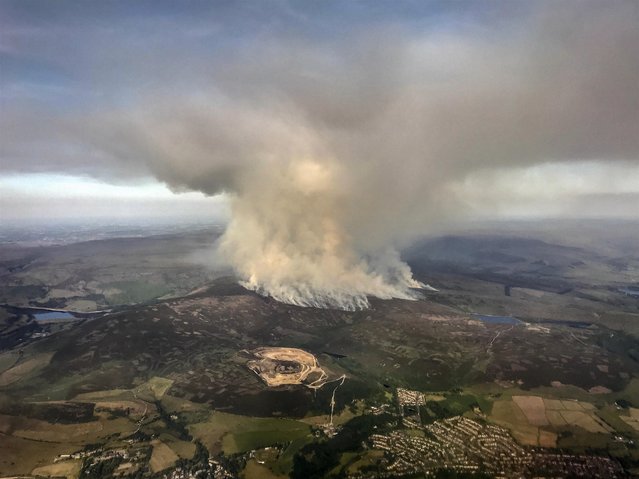 These dramatic pictures taken on Monday evening show the fire on Saddleworth Moor in Stalybridge, England taking hold and sending huge plumes into the sky on June 27, 2018. A major incident has been declared after a huge moorland fire forced dozens of residents to flee their homes in Greater Manchester. The army is on standby to help tackle the blaze which has been raging for several days on Saddleworth Moor. Some 34 properties have been evacuated in Carrbrook, Stalybridge, while police have confirmed some nearby schools will be closed. Public Health England has urged residents to keep windows and doors shut as smoke and flames could be seen for miles. (Photo by Kate MacRae/South West News Service) 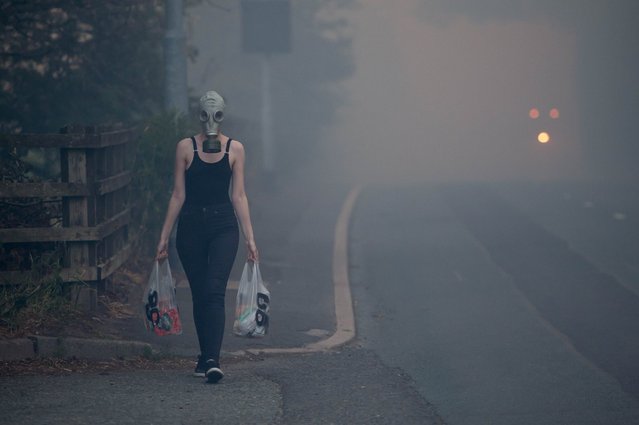 A lady wearing a Gas mask on the way back from the shops. A large cloud of smoke covers the village of Mossley as a large wildfire sweeps across the moors between Dovestones and Buckton Vale in Stalybridge, Greater Manchester on June 26, 2018 in Stalybridge, England. (Photo by Allan Bentley/Cavendish Press) 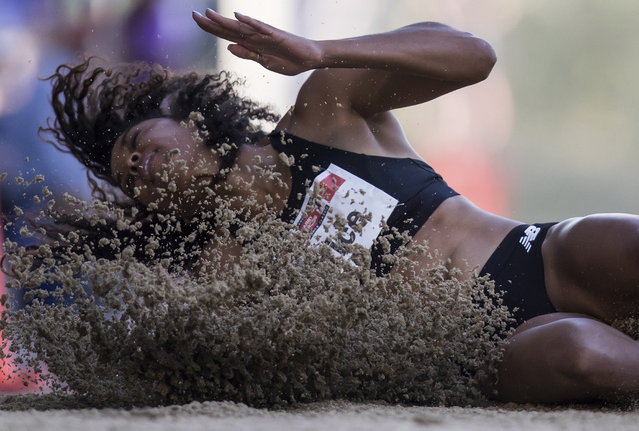 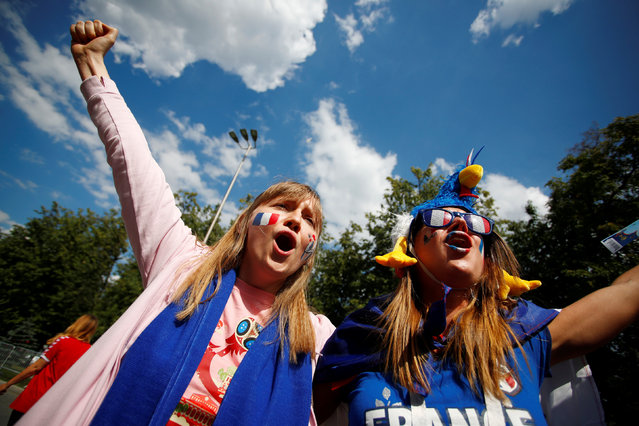 France fans before the Russia 2018 World Cup Group C football match between Denmark and France at the Luzhniki Stadium in Moscow on June 26, 2018. (Photo by Axel Schmidt/Reuters) 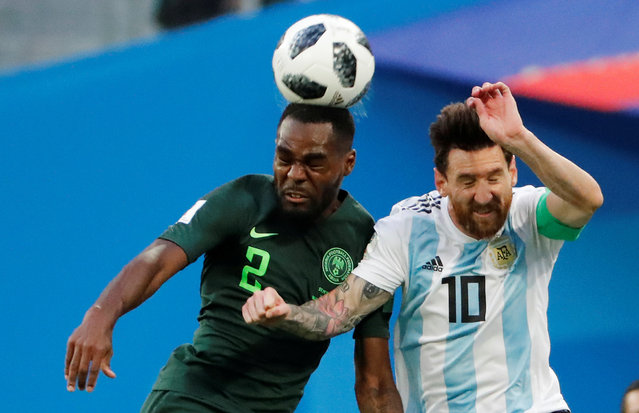 Brian Idowu of Nigeria (left) and Argentina's Lionel Messi fight for the ball during the group D match between Argentina and Nigeria, during the 2018 soccer World Cup at the St. Petersburg Stadium on June 26, 2018. (Photo by Jorge Silva/Reuters) 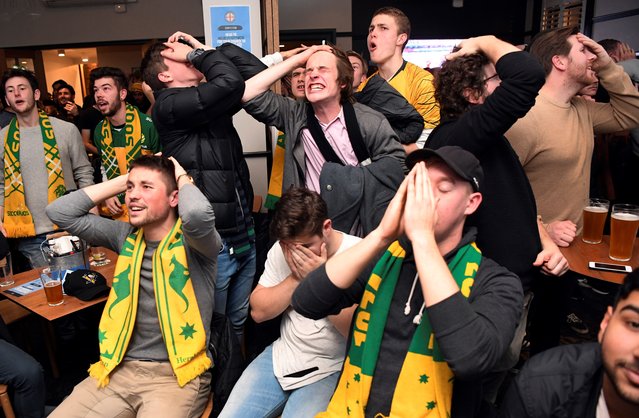 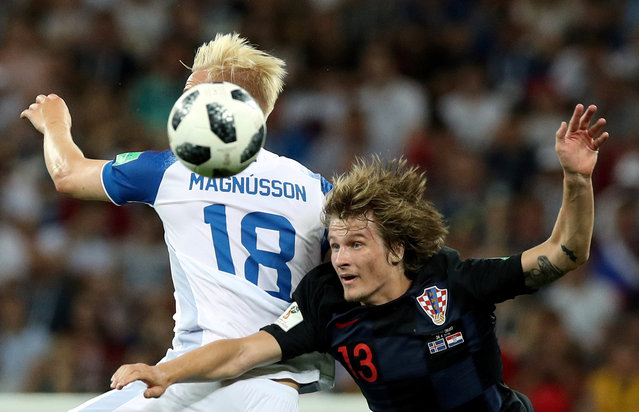 Croatia's Tin Jedvaj in action with Iceland's Hordur Magnusson during the group D match between Iceland and Croatia, at the 2018 soccer World Cup in the Rostov Arena in Rostov- on- Don, Russia, Wednesday, June 27, 2018. (Photo by Albert Gea/Reuters) 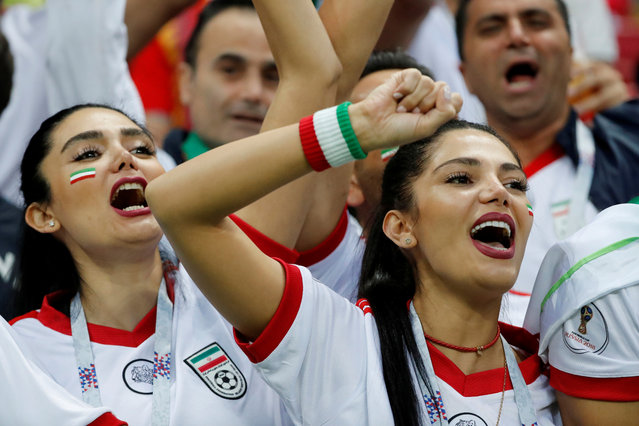 Iranian fans react before the Russia 2018 World Cup Group B football match between Iran and Spain at the Kazan Arena in Kazan on June 20, 2018. (Photo by Jorge Silva/Reuters) 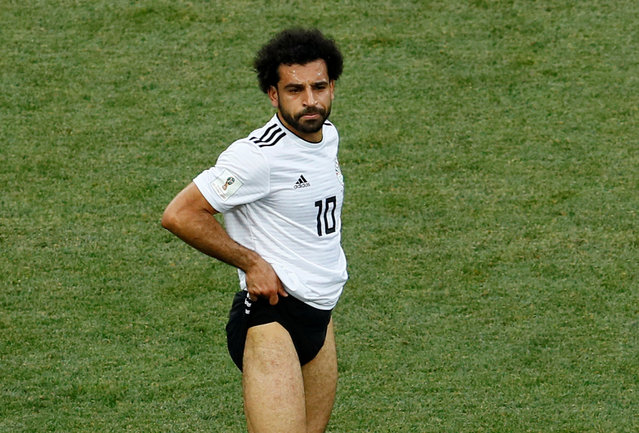 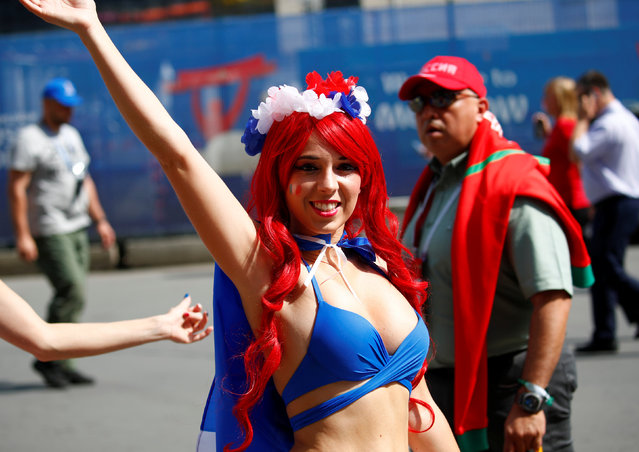