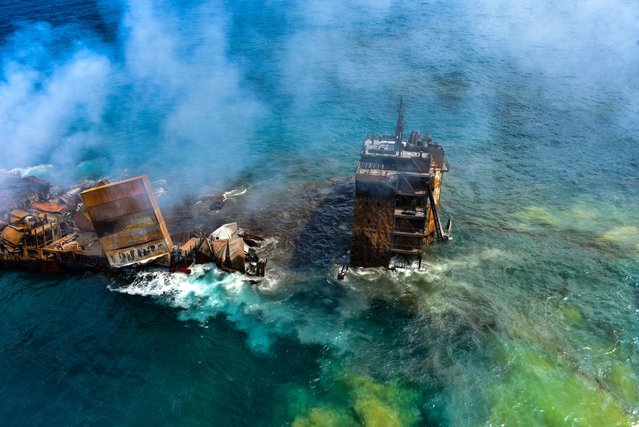 Smoke rises from a fire onboard the MV X-Press Pearl vessel as it sinks while being towed into deep sea off the Colombo Harbour, in Sri Lanka on June 2, 2021. The cargo ship, carrying tonnes of chemicals, sank off Sri Lanka's west coast after a fire raged on deck for two weeks, in one of the country's worst-ever marine disasters. (Photo by Sri Lanka Airforce Media/Handout via Reuters) 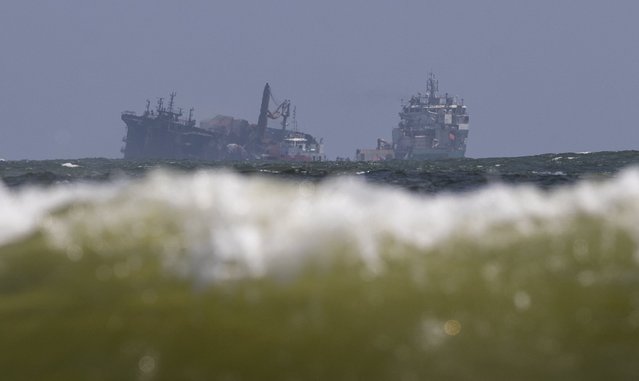 The MV X-Press Pearl, left, is pulled by a navel vessel at Kapungoda, where it is anchored off Colombo port on the outskirts of Colombo, Sri Lanka, Wednesday, June 2, 2021. Salvage experts were attempting to tow the fire-stricken container ship that had been loaded with chemicals into the deep sea as the vessel started to sink Wednesday off Sri Lanka's main port, officials said. Water submerged the MV X-Press Pearl's quarterdeck a day after firefighters extinguished a blaze that had been burning for 12 days. (Photo by Eranga Jayawardena/AP Photo) 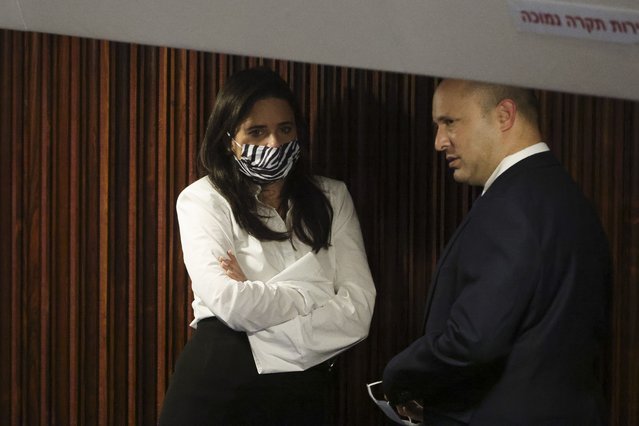 Ayelet Shaked, left, and Naftali Bennett, parliament members from Yamina party, chat during a special session of the Knesset, whereby Israeli lawmakers elect a new president, at the plenum in the Knesset, Israel's parliament, in Jerusalem on Wednesday, June 2, 2021. (Photo by Ronen Zvulun/Pool Photo via AP Photo) 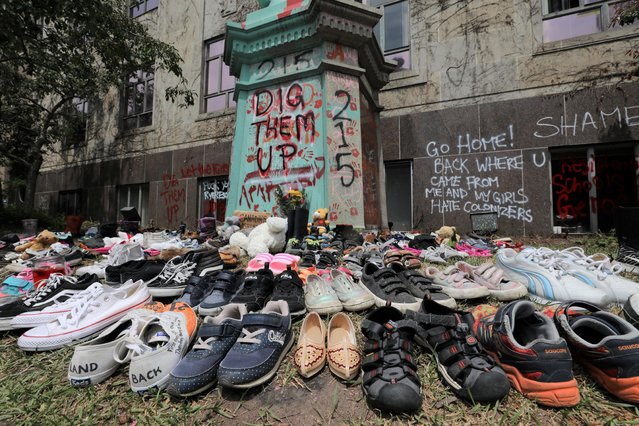 Children's shoes line the base of the defaced Ryerson University statue of Egerton Ryerson, considered an architect of Canada's residential indigenous school system, following the discovery of the remains of 215 children on the site of British Columbia's former Kamloops Indian Residential School, in Toronto, Ontario, Canada on June 2, 2021. (Photo by Chris Helgren/Reuters) Protesters block a main road by burning tires, after a top court suspended a Central Bank decree that allowed the Lebanese to withdraw from dollar deposits at a rate two and a half times better than the fixed exchange rate, in downtown Beirut, Lebanon, early Thursday, June 3, 2021. In a late night burst of anger, dozens of protesters blocked main roads in Beirut and north of the capital to protest against the constant humiliation of Lebanese who line up to fill their cars with fuel, increasing power cuts, search for medicine and deal with confused banking decisions that are robbing thousands of their savings. (Photo by Hussein Malla/AP Photo) 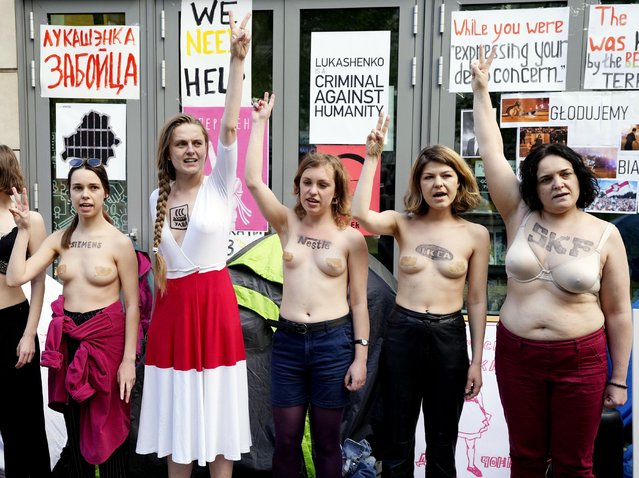 Women take part in a demonstration against Belarusian President Alexander Lukashenko in Warsaw, Poland, Wednesday, June 2, 2021. Three members of the ethnic Polish minority in Belarus who had been under arrest for their political opposition to the country's regime are now free and in Poland. The Polish Foreign Ministry announced on Wednesday that the three arrived in Poland on May 25. (Photo by Czarek Sokolowski/AP Photo) 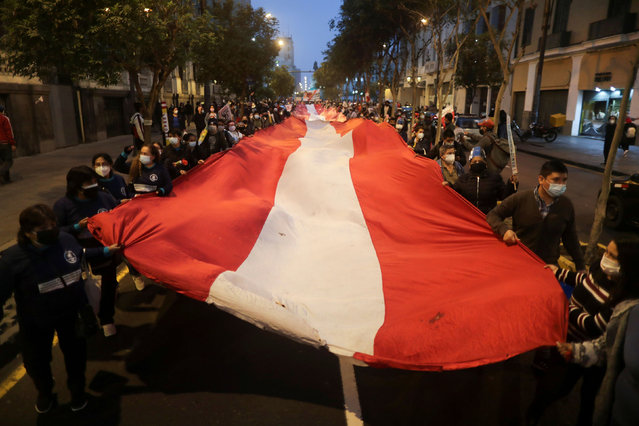 Protestors march with an oversized Peruvian flag against Peru's presidential candidate Keiko Fujimori during a demonstration ahead of the June 6 run-off election between Fujimori and Pedro Castillo, in Lima, Peru on June 1, 2021. (Photo by Sebastian Castaneda/Reuters) 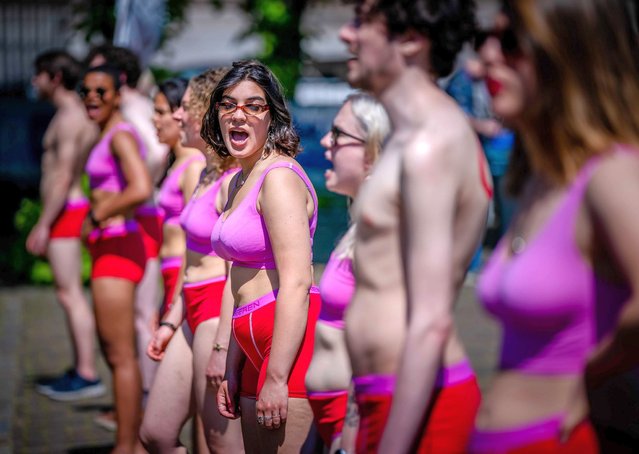 Students protest in red underwear on the Plein in The Hague, The Netherlands, 02 June 2021. The action is part of the #NietMijnSchuld campaign by Dutch union FNV Young & United and the National Student Union LSVb, which are campaigning for a debt-free basic grant. (Photo by Bart Maat/EPA/EFE) 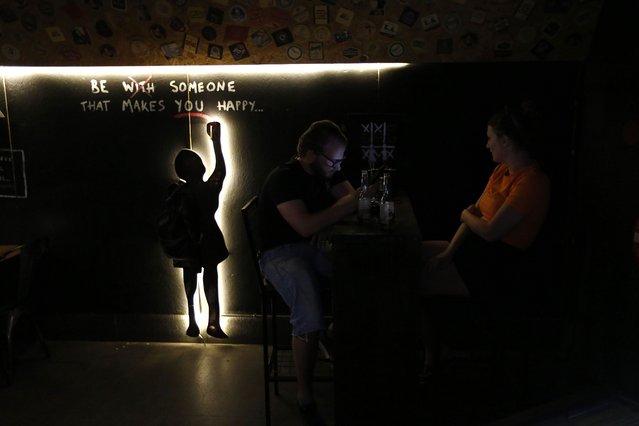 A man and a woman enjoy their drinks inside a bar in the Aglantzi suburb of capital Nicosia, Tuesday, June 1, 2021. Restaurants and bars filled up again in Cyprus as people took full advantage of Tuesday's lifting of a ban on indoor seating after weeks of tough COVID-19 restrictions. (Photo by Petros Karadjias/AP Photo) 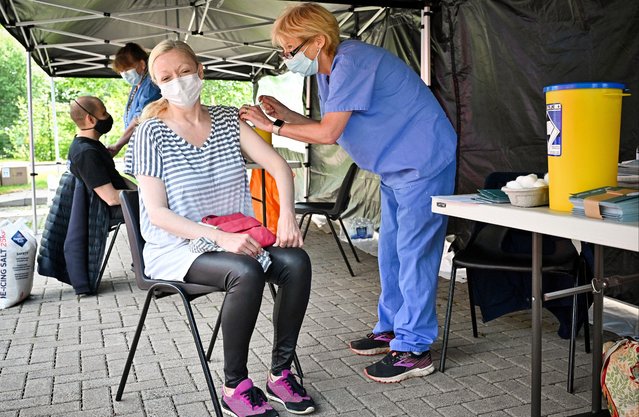 Members of the public on the South Side of the city who are over forty receive their covid vaccination at a car park on June 02, 2021 in Glasgow, Scotland. Scotland's national clinical director, Prof Jason Leitch, said the country was entering a third wave of Covid-19 cases as lockdown restrictions eased, but added, “The question is how big that third wave is”. Yesterday, Scottish First Minister Nicola Sturgeon announced that 13 council would remain in level two of its five-tier pandemic risk system, rather than drop to level one as scheduled. (Photo by Jeff J. Mitchell/Getty Images) 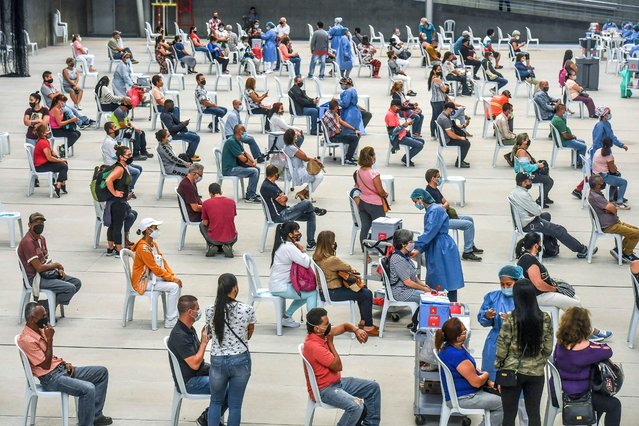 People over 50 years of age are inoculated against COVID-19 at a vaccination centre mounted at a volleyball arena in Medellin, Colombia, on June 1, 2021, amid the ongoing novel coronavirus pandemic. (Photo by Joaquin Sarmiento/AFP Photo) 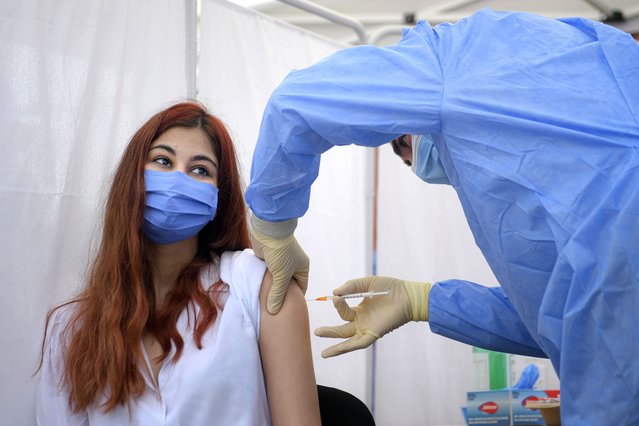 A girl gets a Pfizer BioNTech COVID-19 vaccine in Bucharest, Romania, Wednesday, June 2, 2021. Romania has started the vaccination campaign for children between the ages of 12 and 15. (Photo by Andreea Alexandru/AP Photo) 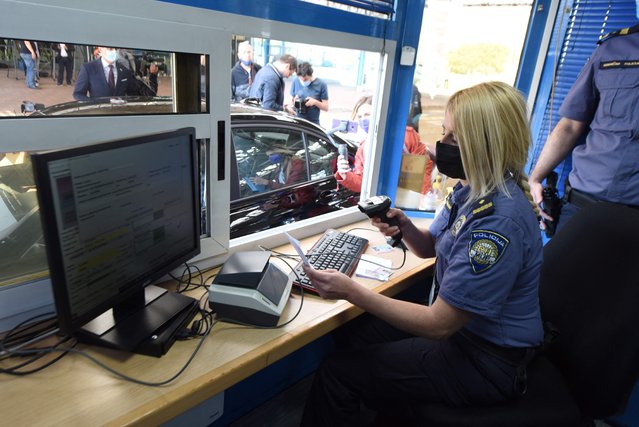 A man receives the Pfizer COVID-19 vaccine at the Noevir Stadium Kobe in Kobe, western Japan, Monday, May 31, 2021. The stadium is being used as an inoculation venue for local residents over 65 years old. Japan, seriously behind in coronavirus vaccination efforts, is scrambling to boost daily shots as the start of the Olympics in July closes in. (Photo by Yu Nakajima/Kyodo News via AP Photo) 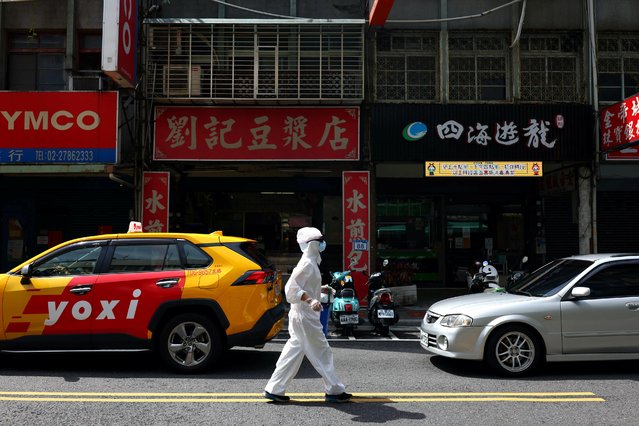 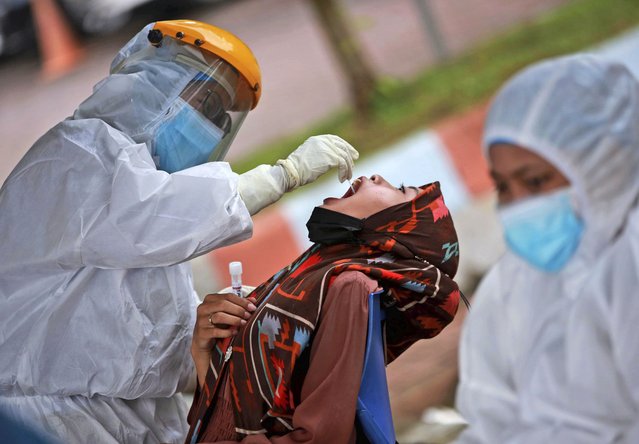 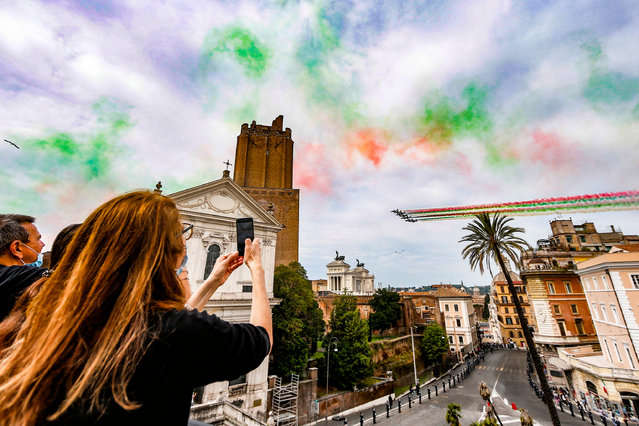 Frecce Tricolori acrobatic team flies over the celebrations of Republic Day, in Rome, Italy, 02 June 2021. The anniversary marks the procl​amation of the Italian Republic in 1946. (Photo by Fabio Frustaci/EPA/EFE) 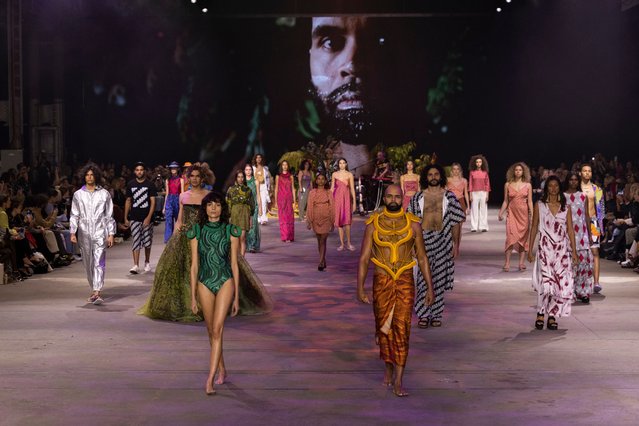 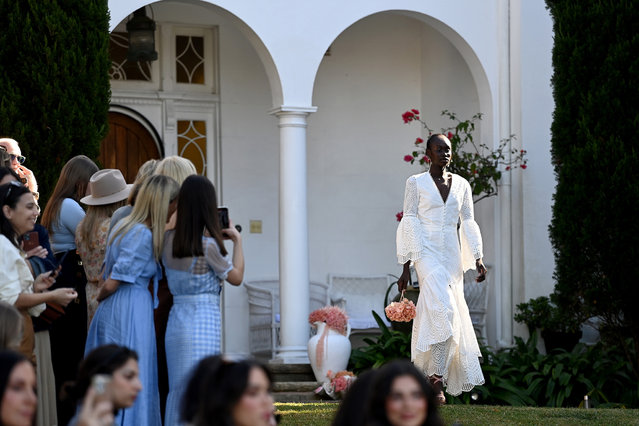 A model presents a creation during the We Are Kindred show within the Afterpay Australian Fashion Week (AAFW) 2021, in Sydney, New South Wales, Australia, 02 June 2021. The AAFW2021 shows are presented from 31 May until 04 June 2021. (Photo by Bianca De Marchi/EPA/EFE) 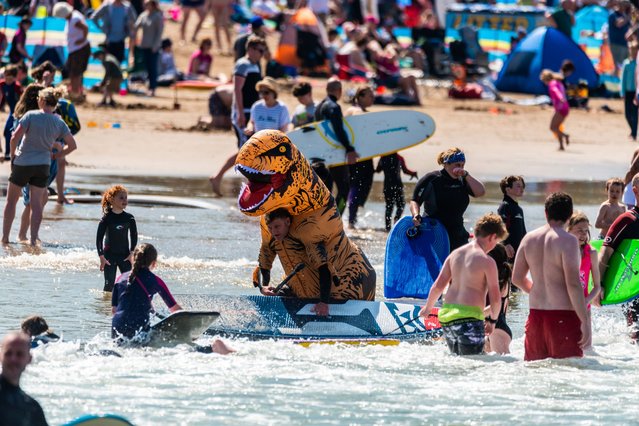