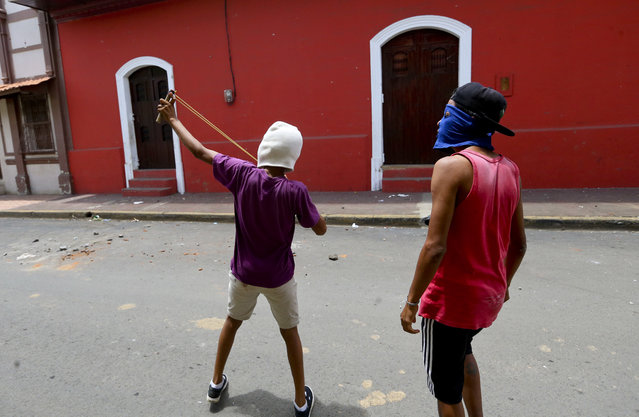 A masked protester aims his slingshot at riot police in the Monimbo neighborhood during clashes, in Masaya, Nicaragua, Saturday, June 2, 2018. More than 110 people have been killed in Nicaragua during clashes between forces loyal to President Daniel Ortega and opposition groups. (Photo by Esteban Felix/AP Photo) 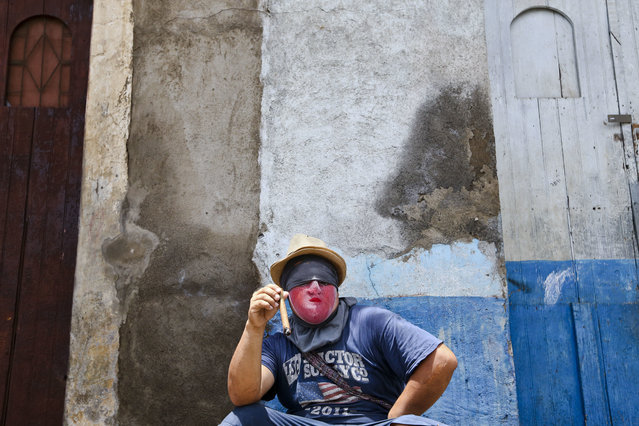 A protester wearing a mask to protect his identity smokes a cigar in the Monimbo neighborhood, in Masaya, Nicaragua, Saturday, June 2, 2018. (Photo by Esteban Felix/AP Photo) 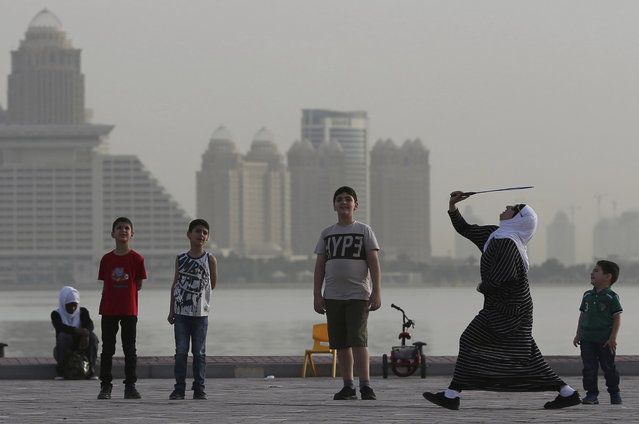 In this Friday, May 4, 2018, photo, a woman plays badminton by the sea with the skyline of Doha, Qatar in the background. The diplomatic crisis gripping the energy-rich country of Qatar, the worst to grip the Gulf region since Iraq's 1990 invasion of Kuwait, will turn a year-old on June 5. (Photo by Kamran Jebreili/AP Photo) 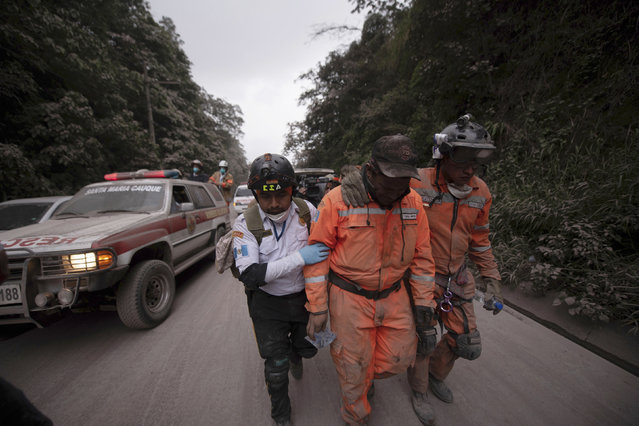 Firefighters leave the evacuation area near Volcan de Fuego, or Volcano of Fire, in El Rodeo, Guatemala, Sunday, June 3, 2018. One of Central America's most active volcanos erupted in fiery explosions of ash and molten rock Sunday, killing people and injuring many others while a towering cloud of smoke blanketed nearby villages in heavy ash. (Photo by Santiago Billy/AP Photo) 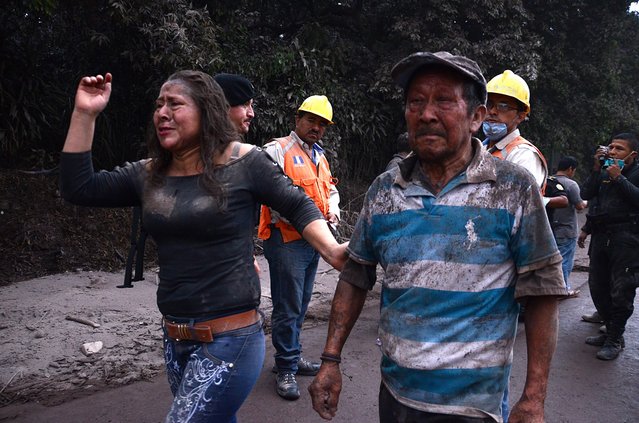 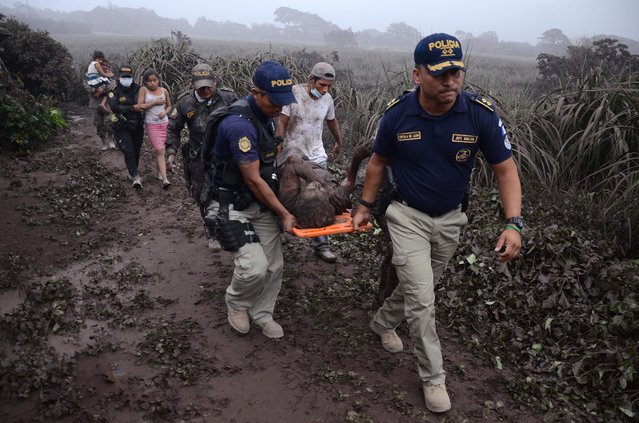 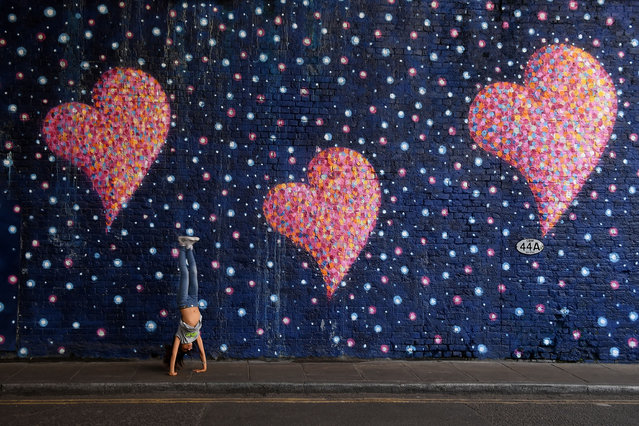 A young girl plays in front of a mural in a tunnel near Borough Market which was painted by graffiti artist James Cochran, also known as Jimmy C, and which commemorates the victims of the London Bridge terror attack on the first anniversary on June 3, 2018 in London, England. The anniversary will be marked by a service at Southwark Cathedral to honour the emergency services' response to last year's attack on 3 June, followed by a short procession from the cathedral to Southwark Needle, at the corner of London Bridge, ending with a minute's silence at 4.30pm. (Photo by Chris J. Ratcliffe/Getty Images) 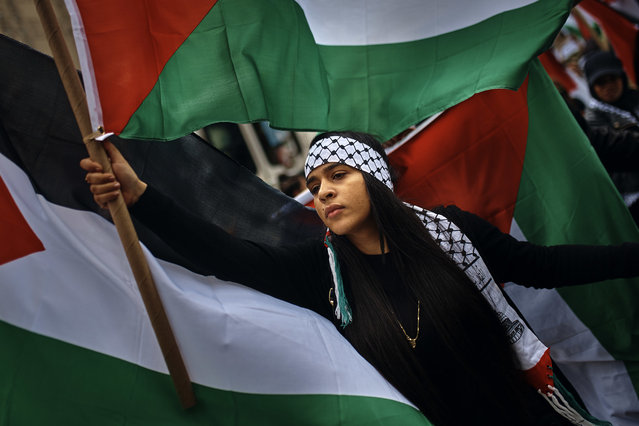 A Palestinian protester holds a tear gas canister in his mouth during a demonstration along the border with Israel east of Khan Yunis in the southern Gaza strip on June 1, 2018. (Photo by Said Khatib/AFP Photo) 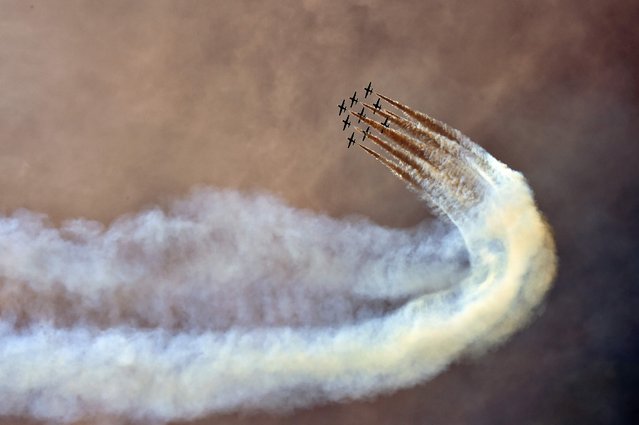 The Italian Air Force aerobatic unit Frecce Tricolori (Tricolor Arrows) prepare to spread smoke with the colors of the Italian flag prior the Moto GP Grand Prix at the Mugello race track on June 3, 2018. (Photo by Filippo Monteforte/AFP Photo) 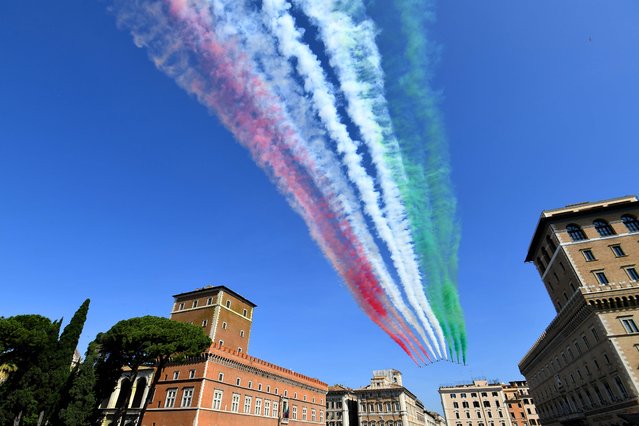 The Italian Air Force aerobatic unit Frecce Tricolori (Tricolor Arrows) spreads smoke with the colors of the Italian flag over Piazza Venezia during the ceremony to mark the anniversary of the Italian Republic (Republic Day) on June 2, 2018 in Rome. (Photo by Vincenzo Pinto/AFP Photo) 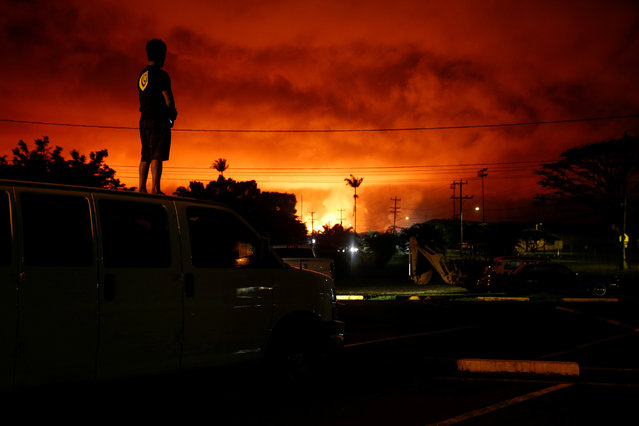 Darryl Sumiki, 52, of Hilo, watches as lava lights up the sky above Pahoa during ongoing eruptions of the Kilauea Volcano in Hawaii, U.S., June 2, 2018. (Photo by Terray Sylvester/Reuters) 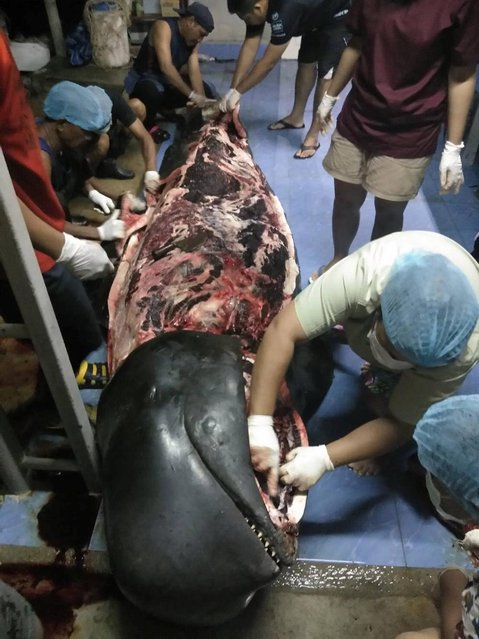 A handout photo made available by ThaiWhales.org on 03 June 2018 shows the total 80 pieces of plastic bags were found in a stomach of Short-Finned Pilot Whale after an autopsy in Songkhla province, southern Thailand, 01 June 2018. The short-finned pilot whale reportedly died after swallowing 80 plastic bags weighing eight kilograms that were found in its stomach after an autopsy. (Photo by Reuters/Thaiwhales) 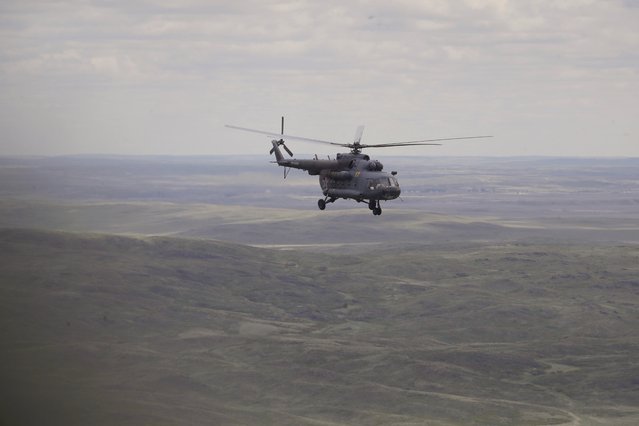 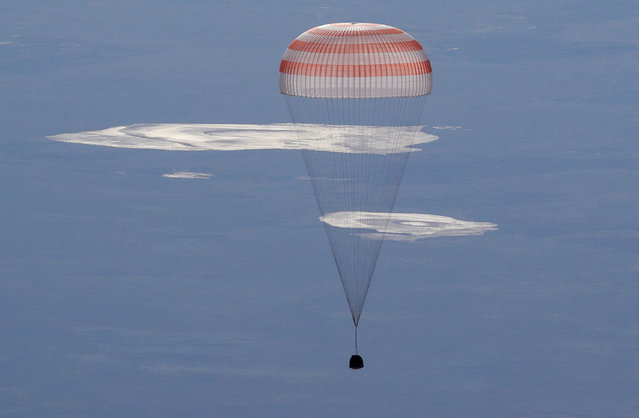 The Soyuz MS-07 capsule carrying the crew of Norishige Kanai of Japan, Anton Shkaplerov of Russia, and Scott Tingle of the U.S. descends beneath a parachute just before landing in a remote area outside the town of Dzhezkazgan (Zhezkazgan), Kazakhstan June 3, 2018. (Photo by Dmitri Lovetsky/Pool via Reuters) 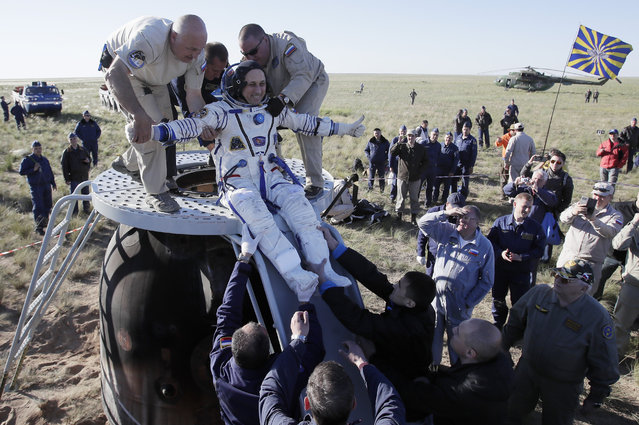 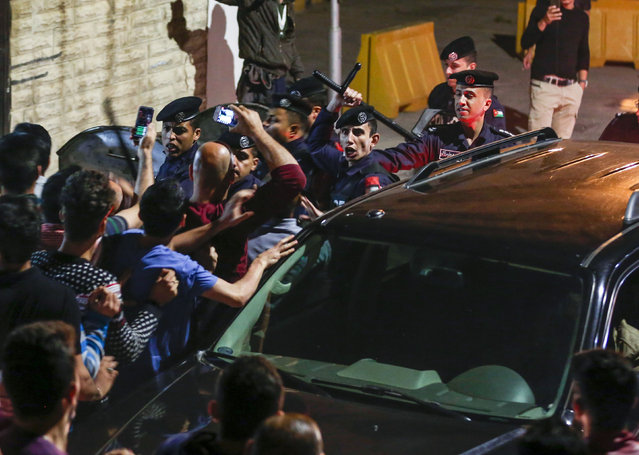 Jordanian riot police and security forces scuffle with protesters attempting to breach the area as they stand guard during a demonstration outside the Prime Minister' s office in the capital Amman late on June 2, 2018. Hundreds of Jordanians demonstrated in the capital Amman for a third consecutive day on June 2 against price hikes and an income tax draft law driven by IMF recommendations to slash its public debt. (Photo by Khalil Mazraawi/AFP Photo) 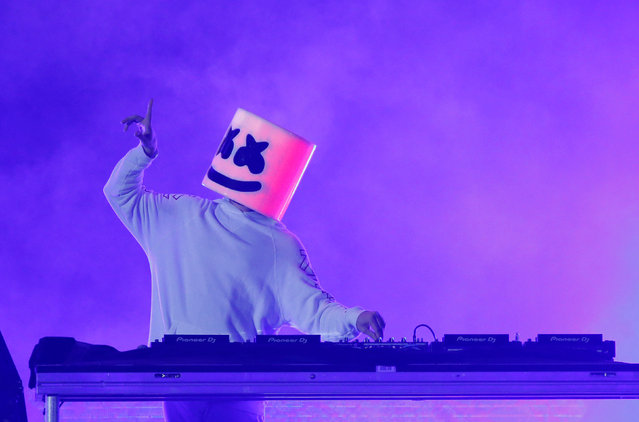 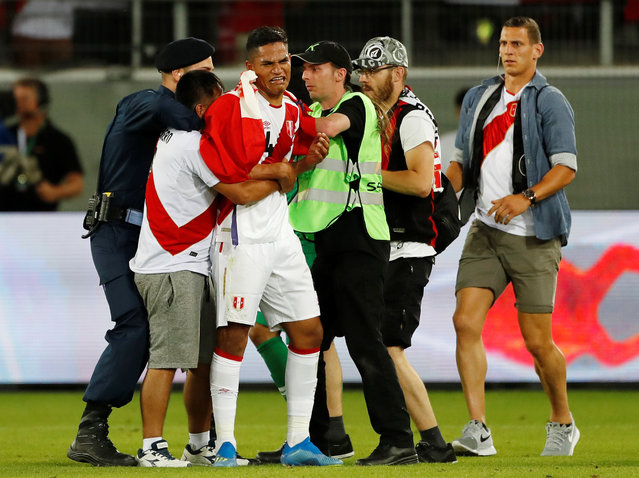 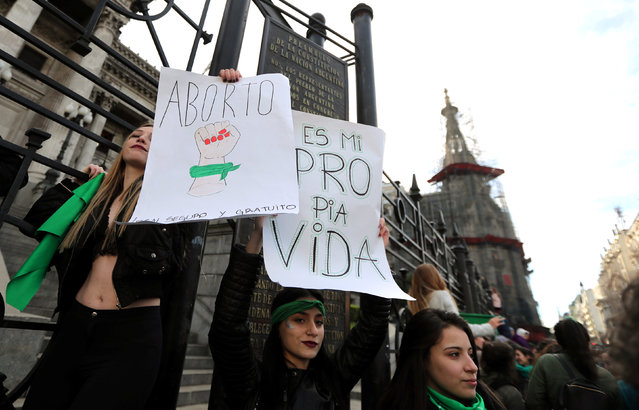 Demonstrators hold up signs reading “abortion – legal, safe, and free” and “it's my own life” during a demonstration in favour of legalising abortion outside the Congress in Buenos Aires, Argentina, June 3, 2018. (Photo by Marcos Brindicci/Reuters) 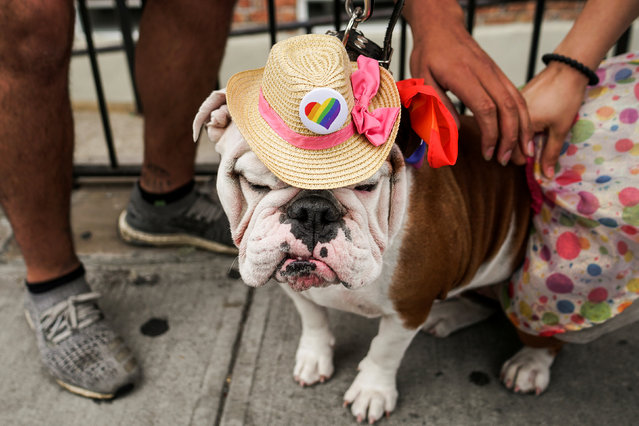 A dog is seen during the Pride day parade in the Queens borough of New York City, New York, U.S., June 3, 2018. (Photo by Go Nakamura/Reuters) 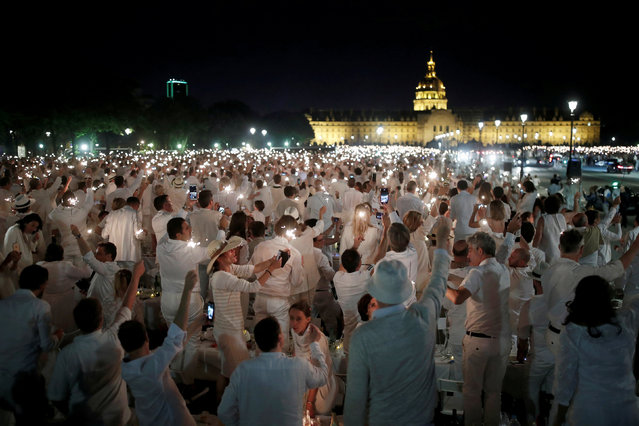 People react at their tables near Les Invalides during the Diner en Blanc (Dinner in White) in Paris, France, June 3, 2018. Diners dressed head to toe in white and bringing with them white tablecloths, glassware and other finery, gather for an impromptu open-air dinner, which takes place at a different place in Paris every year. (Photo by Benoit Tessier/Reuters) 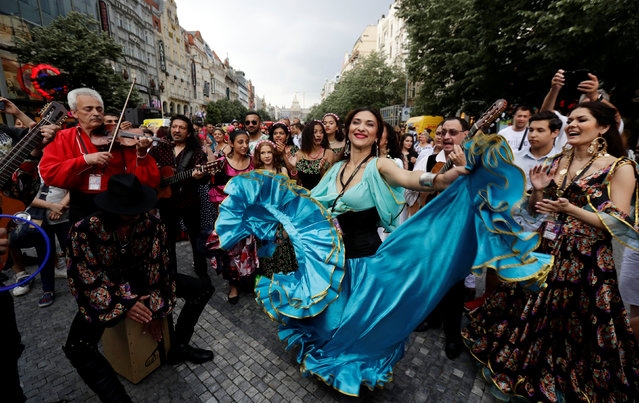 Participants of the Khamoro World Roma Festival dance through the historical centre of Prague, Czech Republic, on June 1, 2018. (Photo by David W. Cerny/Reuters) 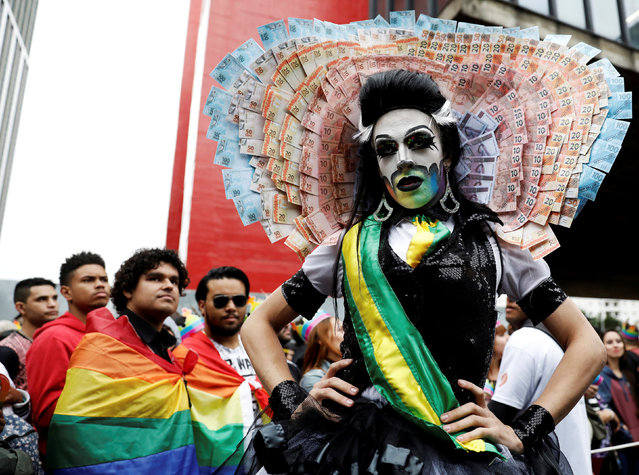 A reveller takes part in the Gay Pride parade along Paulista Avenue in Sao Paulo, Brazil on June 3, 2018. (Photo by Nacho Doce/Reuters) 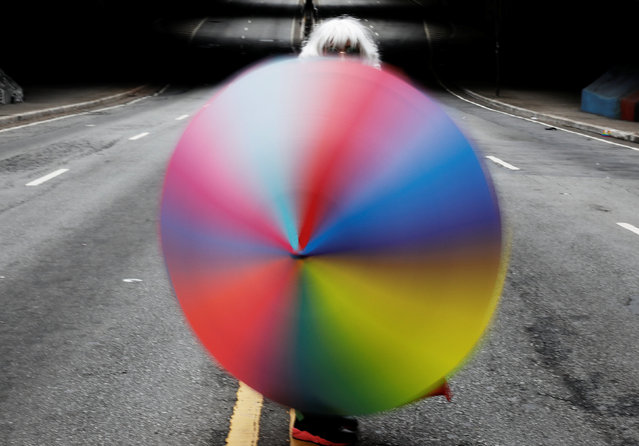 A reveller takes part in the Gay Pride parade along Paulista Avenue in Sao Paulo, Brazil on June 3, 2018. (Photo by Nacho Doce/Reuters)

Revellers dance as they take part in the Gay Pride parade along Paulista Avenue in Sao Paulo, Brazil on June 3, 2018. (Photo by Nacho Doce/Reuters) 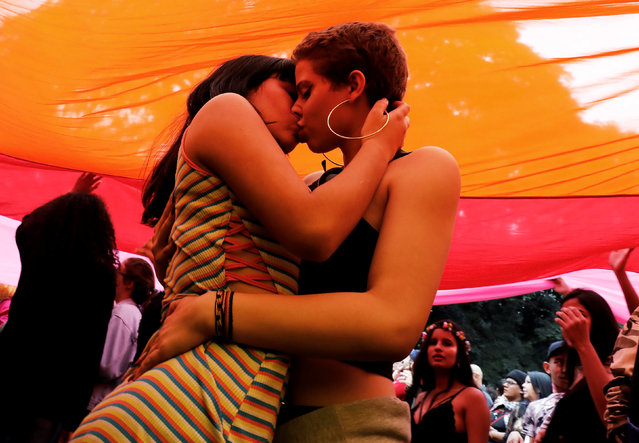