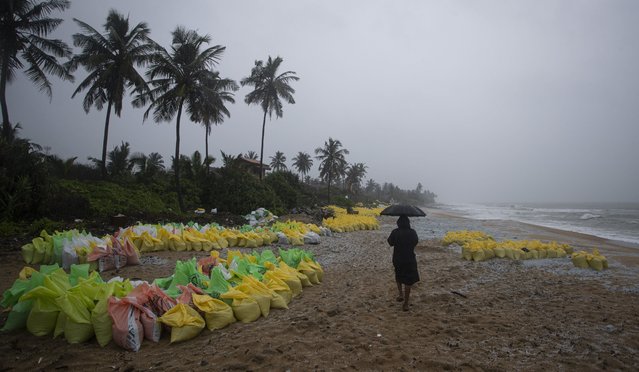 Plastic pellets that got washed ashore from fire-damaged container ship MV X-Press Pearl is collected by the naval officers and kept in sacks on the beach at Kapungoda, outskirts of Colombo, Sri Lanka, Thursday, June 3, 2021. Authorities were trying to head off a potential environmental disaster Thursday as the Singapore-flagged ship that had been carrying chemicals was sinking off of the country's main port. (Photo by Eranga Jayawardena/AP Photo) People play drums as they demonstrate against the government of Colombian President Ivan Duque outside the Congress building in Bogota, on June 2, 2021. Colombian protesters made cautious overtures towards the government Tuesday in talks seeking to end weeks of violent social unrest that has left dozens of people dead and hundreds injured. The National Strike Committee, which represents labour unions, students and indigenous peoples, among others, said there were “approaches for lifting” road blockades that have hamstrung transport for weeks on end, particularly in the country's south. (Photo by Juan Barreto/AFP Photo) 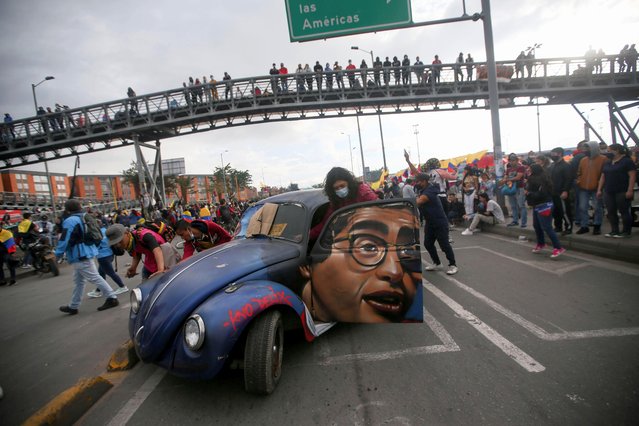 People push a car with the image of late Colombian humorist and journalist Jaime Garzon painted on it during a protest demanding government action to tackle poverty, police violence and inequalities in healthcare and education systems, in Bogota, Colombia, June 2, 2021. (Photo by Luisa Gonzalez/Reuters) 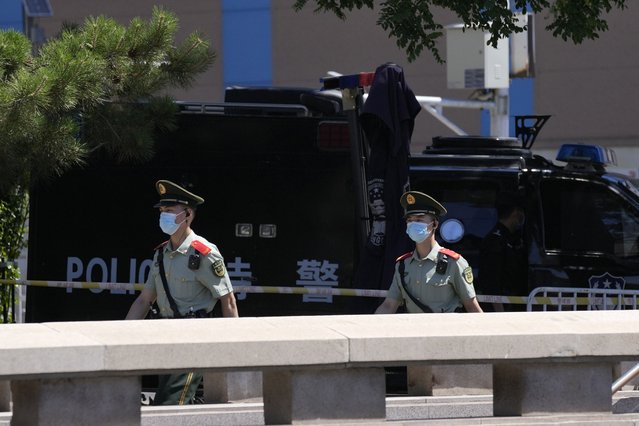 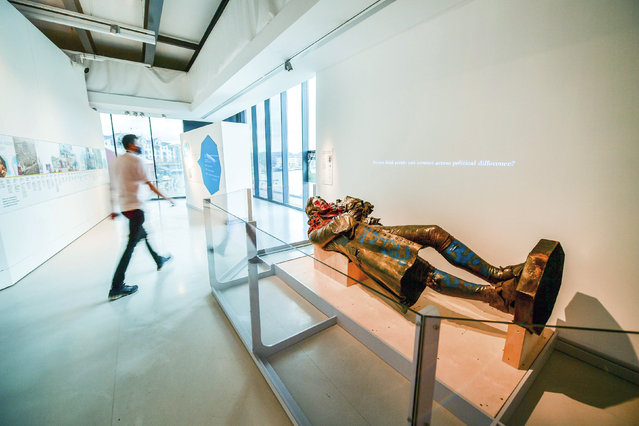 A view of the statue of slave trader Edward Colston, which was toppled during a protest on June 7, 2020 on display at the M Shed as part of the preview of “The Colston statue: What next?”, in Bristol, England, Thursday June 3, 2021. A statue of a 17th-century slave trader that was toppled during anti-racism protests in the English city of Bristol is being displayed in a museum, with visitors being asked to help decide its fate. The bronze likeness of Edward Colston was pulled from its pedestal and dumped in Bristol harbor a year ago, sparking a nationwide debate about commemoration and Britain’s slave-trading history. City workers hauled the statue out of the water and have kept it in storage ever since. (Photo by Ben Birchall/PA Wire via AP Photo) 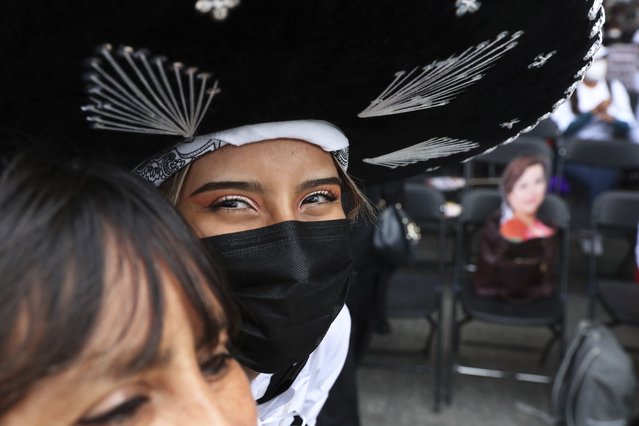 Wearing a mariachi hat, candidate Clara Brugada, who is running as a delegation leader under the ruling party Morena, smiles as she greets supporters on the last day of campaigning ahead of the June 6 mid-term elections, in the Iztapalapa borough of Mexico City, Wednesday, June 2, 2021. (Photo by Marco Ugarte/AP Photo) 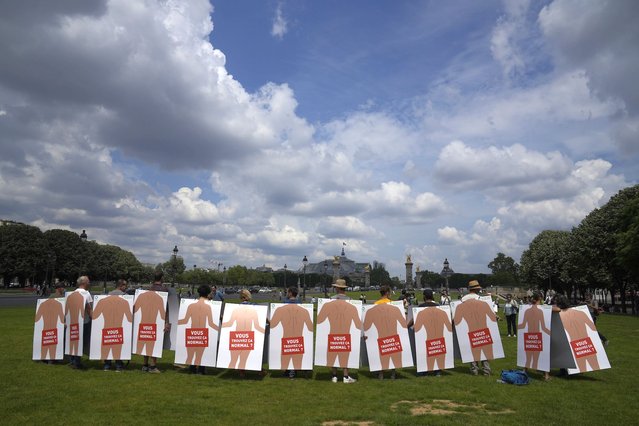 Organic farmers protest with posters reading “Do you find it normal?” on the Invalides plaza in Paris, Wednesday, June 2, 2021 to denounce a planned decrease in subsidies as part of changes to the European Union's agricultural support policies for 2023-2027. Organic farmers are also criticizing what they perceive as the French government's lack of support that branch of agriculture. (Photo by Francois Mori/AP Photo) 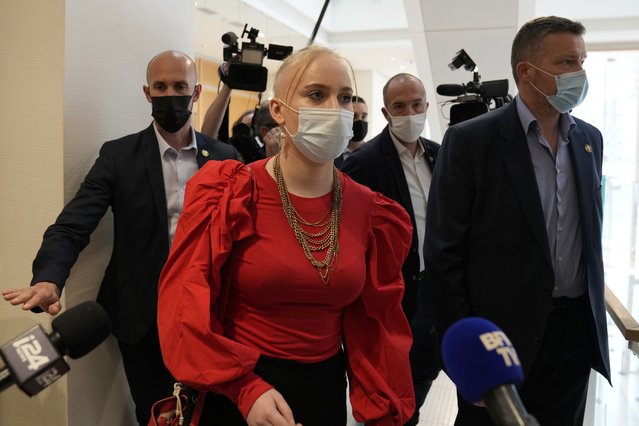 The teenager identifying herself online as Mila leaves at the courtroom Thursday, June 3, 2021 in Paris. Thirteen people went on trial Thursday in Paris accused of cyberbullying or death threats against the teenage girl who posted comments online critical of Islam. The case is the first such trial under new jurisdiction France created this year to prosecute crimes online, including harassment and discrimination. (Photo by Francois Mori/AP Photo) 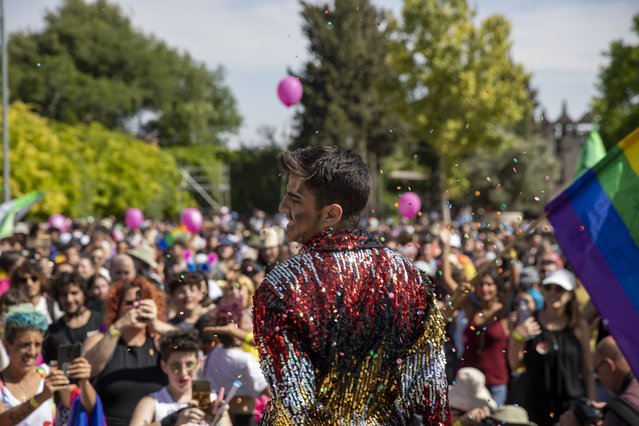 Participants dance in the annual Gay Pride parade in Jerusalem, Thursday, June 3, 2021. Thousands of people marched through the streets of Jerusalem on Thursday in the city's annual gay pride parade. (Photo by Ariel Schalit/AP Photo) 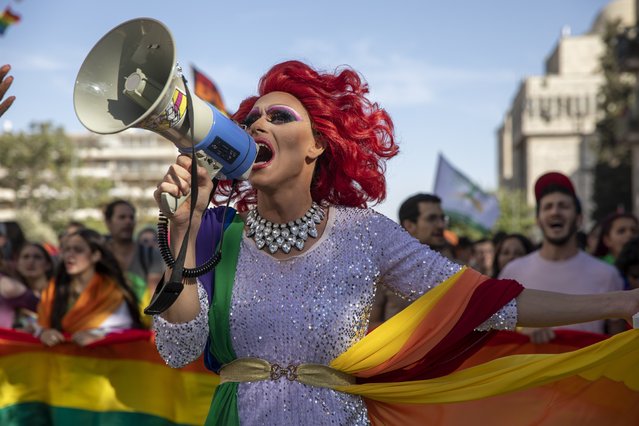 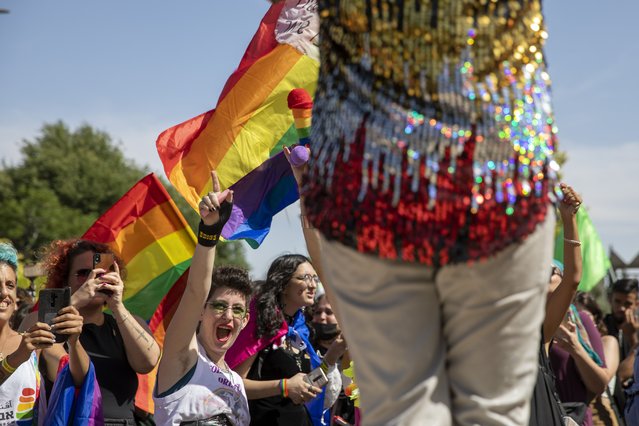 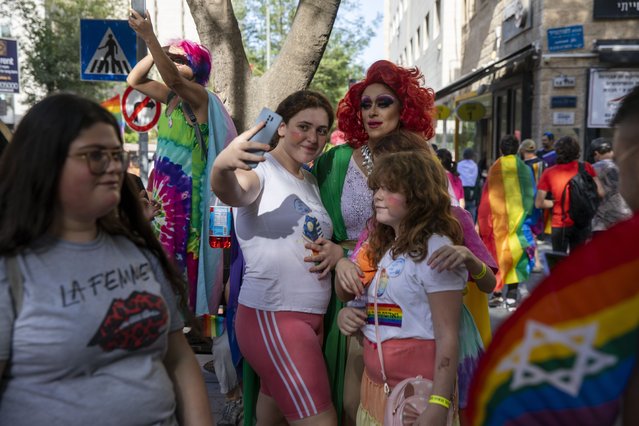 Participants stop for a photo in the annual Gay Pride parade in Jerusalem, Thursday, June 3, 2021. (Photo by Ariel Schalit/AP Photo) 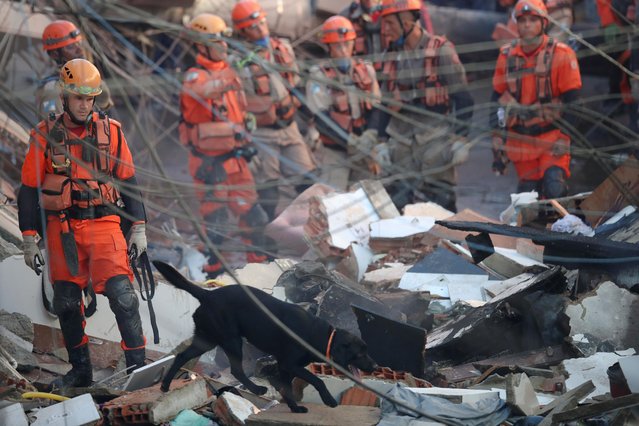 Firefighters and a rescue dog search for victims between the debris of a collapsed building in Rio das Pedras slum, Rio de Janeiro, Brazil, June 3, 2021. (Photo by Ricardo Moraes/Reuters) 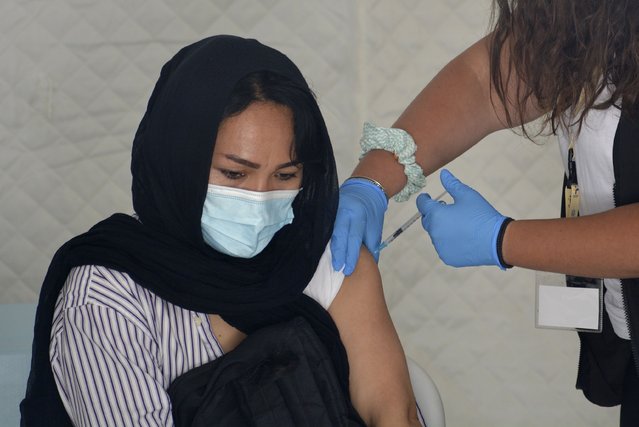 A migrant receives the Johnson and Johnson vaccine against COVID-19 by a medical staff of the National Health Organisation (EODY), at Karatepe refugee camp, on the northeastern Aegean island of Lesbos, Greece, Thursday, June 3, 2021. Vaccinations started Thursday for people over 18 years old in migrant camps on the Greek islands. (Photo by Panagiotis Balaskas/AP Photo) 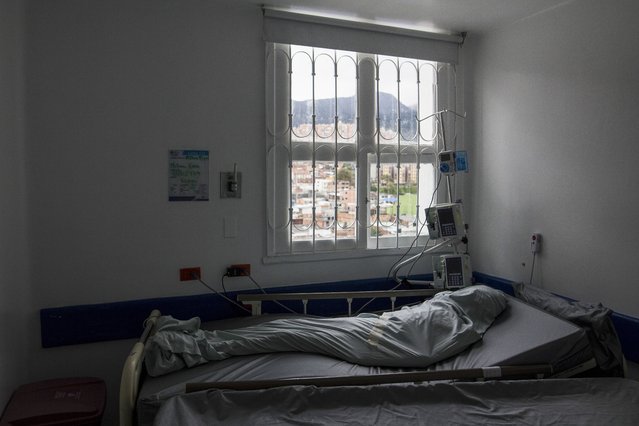 The body of a patient who died from COVID-19 lies wrapped in a body bag at the Samaritana Hospital in Bogota, Colombia, Thursday, June 3, 2021. Colombia has become a pandemic hotspot as it experiences a third wave of COVID-19 infections and a surge in deaths. (Photo by Ivan Valencia/AP Photo) 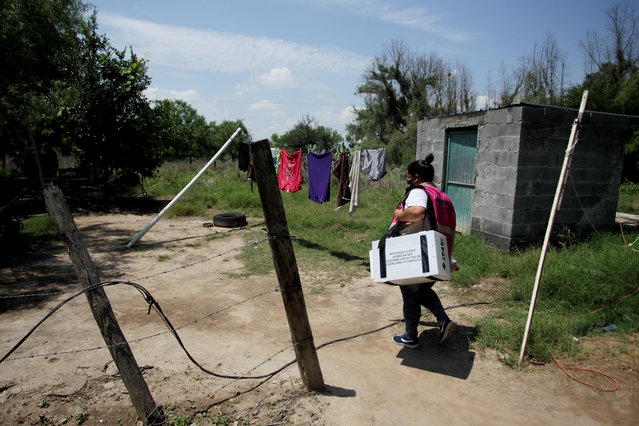 A worker of the National Electoral Institute (INE) carries voting materials while delivering to a polling station ahead of the mid-term elections on June 6, in Mamulique, on the outskirts of Monterrey, Mexico on June 2, 2021. (Photo by Daniel Becerril/Reuters) 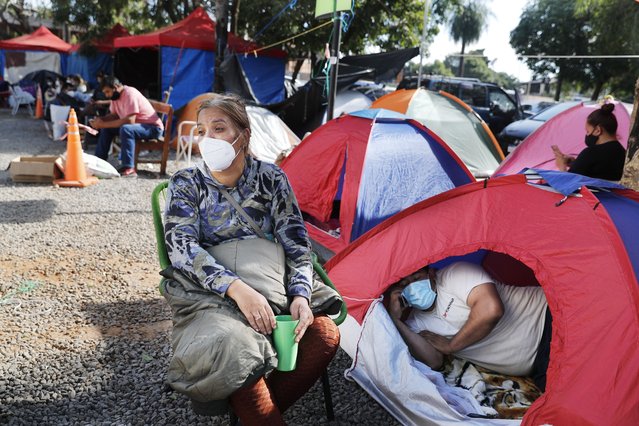 Relatives of COVID-19 patients camp outside the Ingavi Hospital in San Lorenzo, Paraguay, Wednesday, June 2, 2021. The relatives maintain a round-the-clock vigil to provide the food and medicines for their hospitalized family members. (Photo by Jorge Saenz/AP Photo) 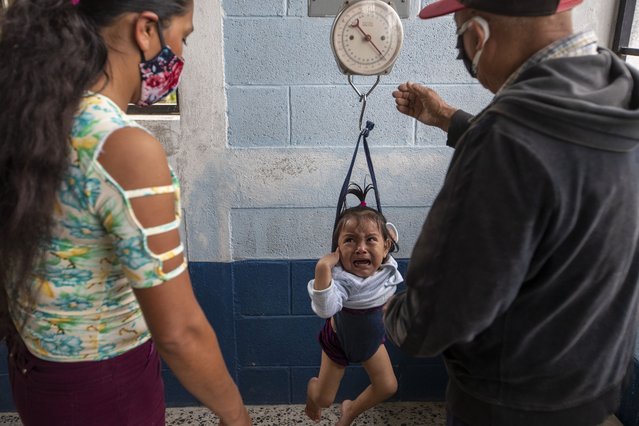 In this photo published on June 3, 202, volunteer Santiago Sanchez, right, measures a baby's weight alongside the girl's mother at a health center in Cachoche village near Tizamarte, Guatemala, Dec. 10, 2020. A nurse vaccinates and measures babies and spots the effects of malnutrition at this community center where there is no running water. (Photo by Moises Castillo/AP Photo) 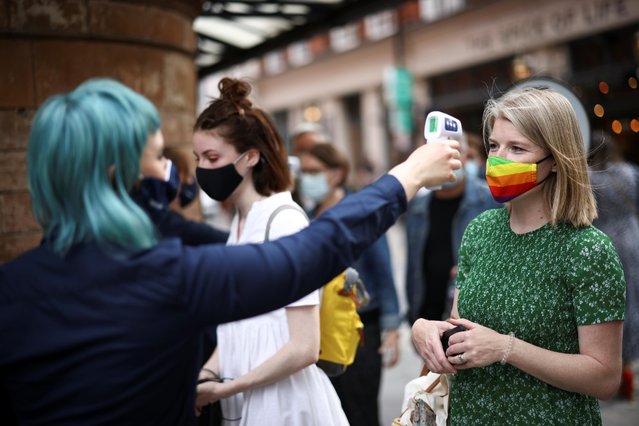 People have their temperature checked while queuing for the West End show “The Show Must Go On” at the Palace Theatre, amid the spread of coronavirus disease (COVID-19) in London, Britain, June 2, 2021. (Photo by Henry Nicholls/Reuters) 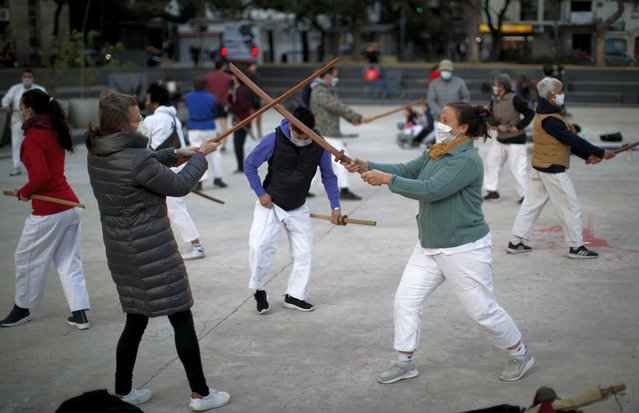 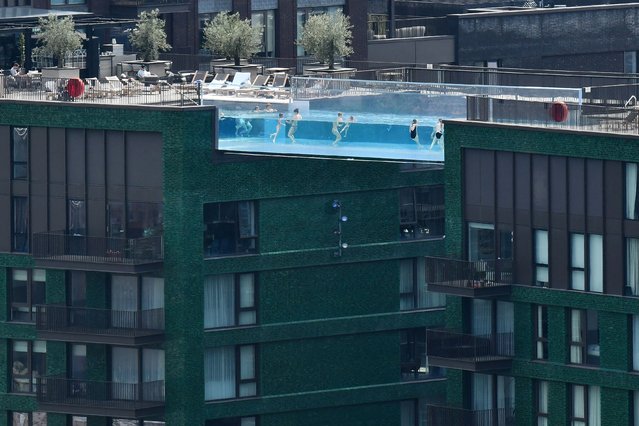 People swim in the Sky Pool – a transparent acrylic swimming pool bridge that is fixed between two apartment blocks – at Embassy Gardens in south-west London on June 3, 2021, as the city enjoys another sunny day. Much of Britain has enjoyed several days of fine weather with top temperatures reaching above 25 degrees Celsius. (Photo by Justin Tallis/AFP Photo) 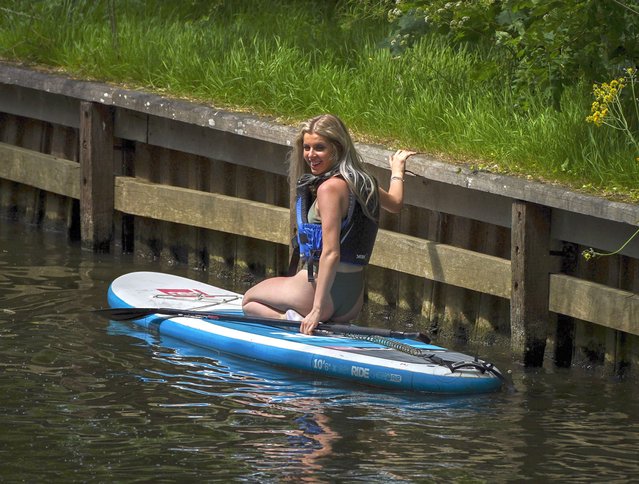