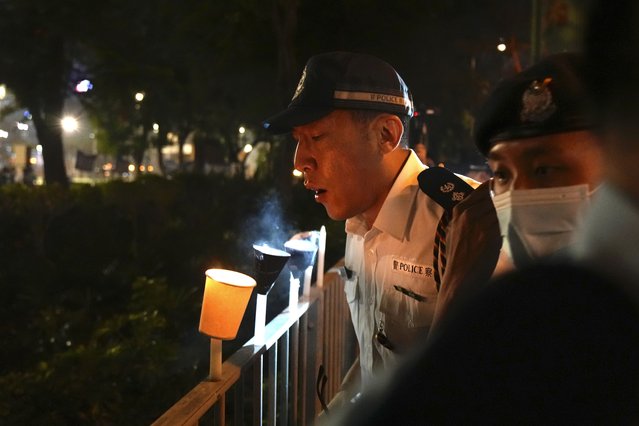 Police officers blow out candles lit by people marking the anniversary of the military crackdown on a pro-democracy student movement in Beijing, outside Victoria Park in Hong Kong, Friday, June 4, 2021. A member of the committee that organizes Hong Kong's annual candlelight vigil for the victims of the Tiananmen Square crackdown was arrested early Friday on the 32nd anniversary. (Photo by Kin Cheung/AP Photo) 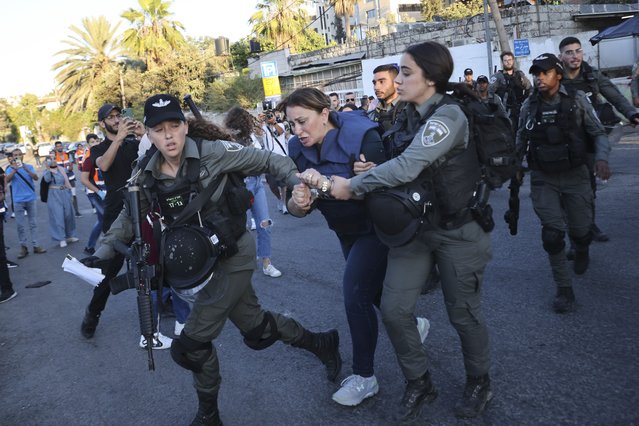 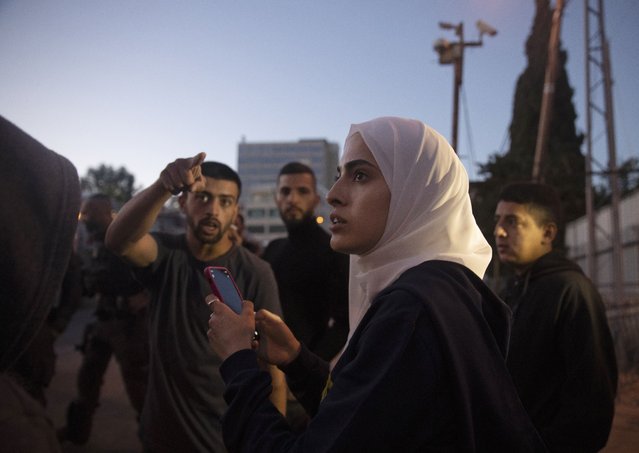 Palestinian activist Muna al-Kurd, center, stands with other activists as Israeli police approach their friends repairing a mural that was defaced by a Jewish settler, in the Sheikh Jarrah neighborhood of east Jerusalem, where Palestinian families face imminent eviction from their homes by Israeli settlers, Monday, May 24, 2021. On Sunday, June 6, 2021, Israel arrested and later released al-Kurd in the contested Sheikh Jarrah neighborhood of Jerusalem, a day after forcefully detaining a prominent journalist there. (Photo by Maya Alleruzzo/AP Photo) 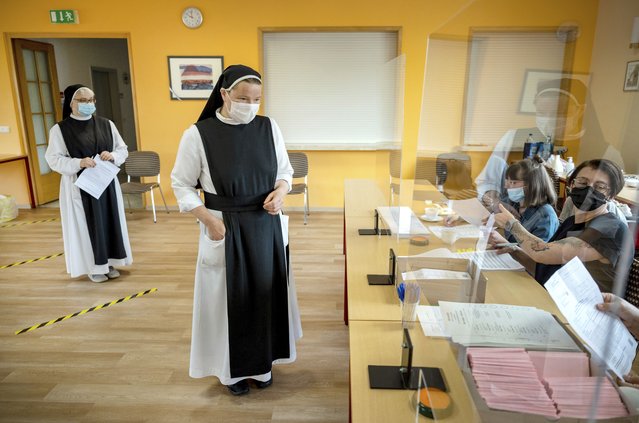 Sisters Pauline, left, and Gertrud from the Cistercian convent of Helfta arrive at the polling station during the state elections of German federal state Saxony-Anhalt, in the Helfta district of Eisleben, Germany, Sunday, June 6, 2021. The election for the new state parliament in Saxony-Anhalt is the last state election before the federal election in September 2021. (Photo by Hendrik Schmidt/dpa via AP Photo) 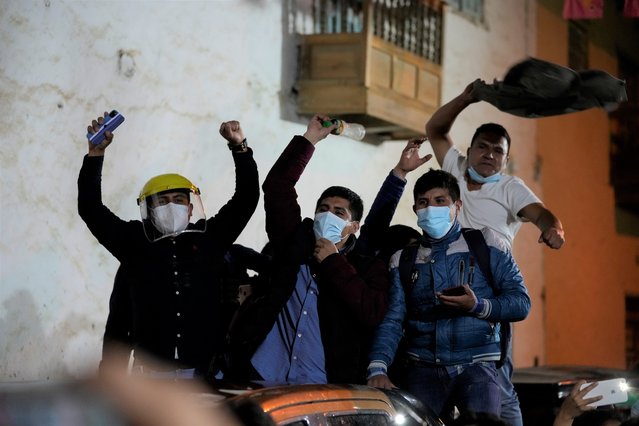 Supporters of presidential candidate Pedro Castillo cheer in the street during a runoff election, in Tacabamba, Peru, Sunday, June 6, 2021. Peruvians voted in a presidential run-off election to choose between Fujimori, the daughter of jailed ex-President Alberto Fujimori, and Pedro Castillo, a political novice that until recent was a rural schoolteacher. (Photo by Martin Mejia/AP Photo) 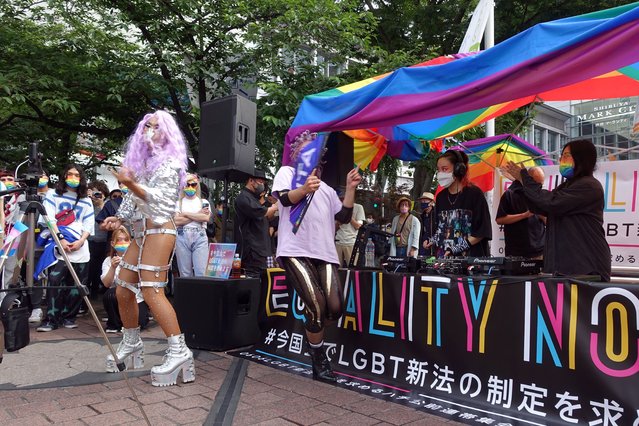 Dozens of LGBTQ activists and supporters of equal rights laws gather at the Shibuya district Sunday June 6, 2021, in Tokyo. Dozens of sexual minority activists and supporters rallied for equal rights outside a main Tokyo station Sunday in an effort to gain public support to get their long-sought equality law enacted before the Olympics amid thinning hope because of the conservative governing party's resistance. (Photo by Mari Yamaguchi/AP Photo) 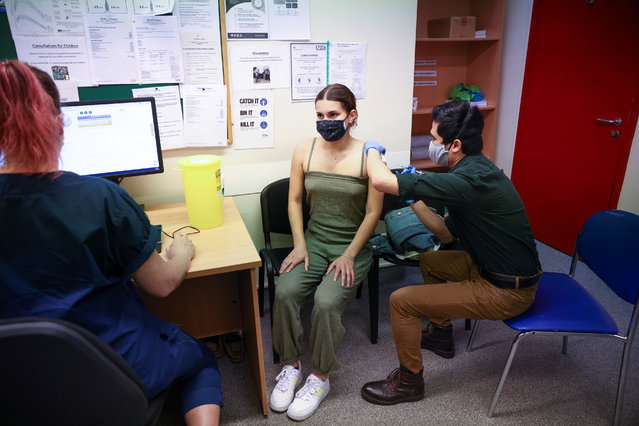 A person receives a dose of the Pfizer BioNTech vaccine, at vaccination centre for young people and students at the Hunter Street Health Centre, amid the coronavirus disease (COVID-19) outbreak, in London, Britain, June 5, 2021. (Photo by Henry Nicholls/Reuters) 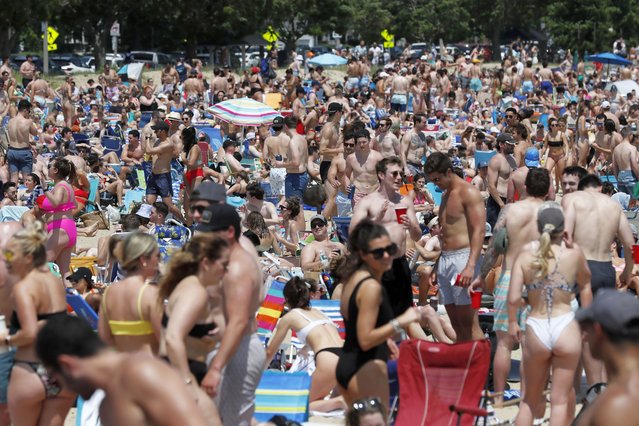 Crowds gather on L Street Beach, Saturday, June 5, 2021, in the South Boston neighborhood of Boston. New England is giving the rest of the country a possible glimpse into the future if more Americans get vaccinated. The six-state region has among the highest vaccination rates in the U.S. and is seeing sustained drops in COVID-19 cases, hospitalizations and deaths. (Photo by Michael Dwyer/AP Photo) 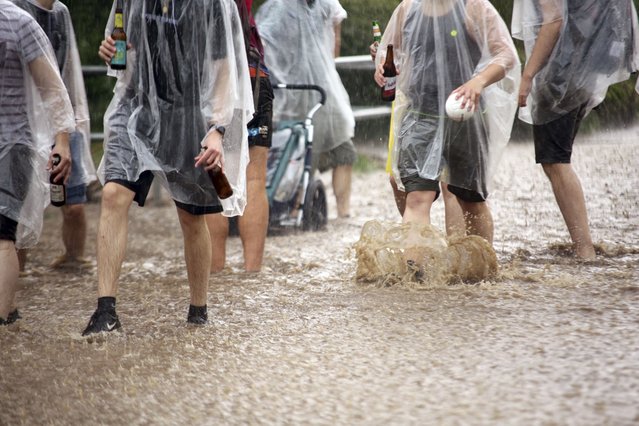 A group of young men walk in the rain on a flooded street in Wernigerode, Germany, Saturday, June 5, 2021. German authorities have issued severe weather warnings for parts of western Germany, a day after a man was killed and a 12-year-old girl was seriously injured in separate storm-related incidents. (Photo by Matthias Bein/dpa via AP Photo) 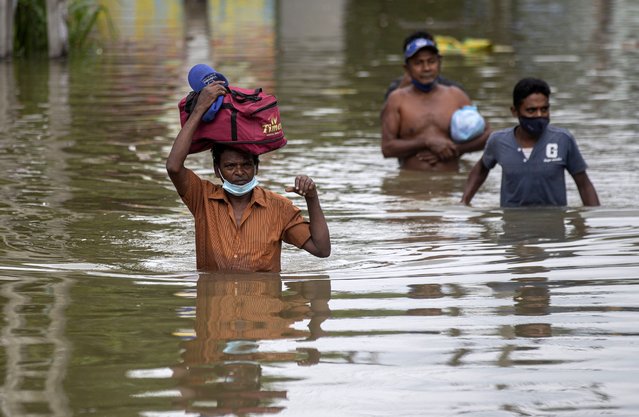 Sri Lankans wade through an inundated street following heavy rainfall at Malwana, on the outskirts of Colombo, Sri Lanka, Saturday, June 5, 2021. Flash floods and mudslides triggered by heavy rains in Sri Lanka have killed at least four people and left seven missing, while more than 5,000 are displaced, officials said Saturday. Rains have been pounding six districts of the Indian Ocean island nation since Thursday night, and many houses, paddy fields and roads have been inundated, blocking traffic. (Photo by Eranga Jayawardena/AP Photo) 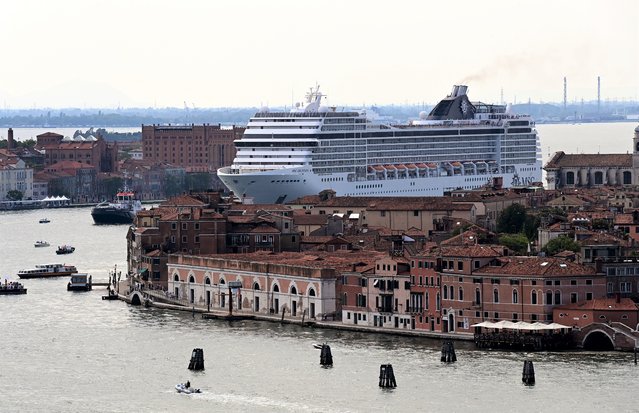 The MSC Orchestra cruise ship sails across the basin as it leaves Venice on June 05, 2021. The cruise ship, which arrived in Venice on June 03, 2021 for the first time in 17 months, signalling the return of tourists after the coronavirus pandemic but enraging those who decry the impact of the giant floating hotels on the world heritage site, picked up about 650 passengers on June 05, before heading south to sample the delights of Bari, Corfu, Mykonos and Dubrovnik. (Photo by Miguel Medina/AFP Photo) 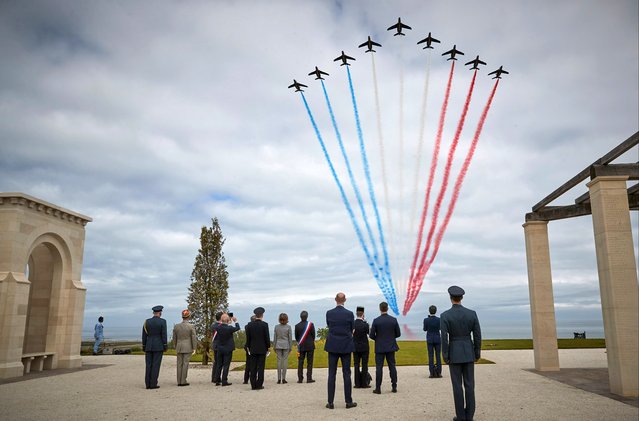 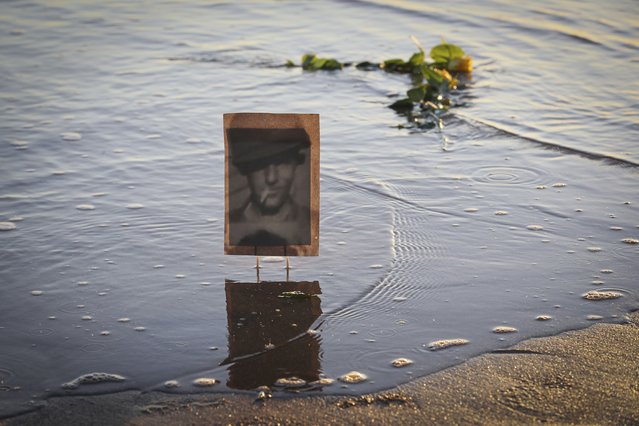 A picture of an unknown soldier is seen on the shore of Omaha Beach in Saint Laurent sur mer, Normandy, Sunday, June 6, 2021 on the eve of 77th anniversary of the assault that helped bring an end to World War II. (Photo by David Vincent/AP Photo) 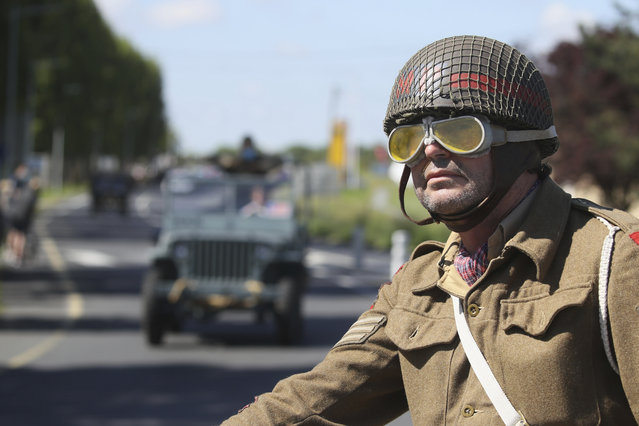 World War II history enthusiasts parade in WWII vehicles in Ouistreham, Normandy, Saturday June, 5 2021 on the eve of 77th anniversary of the assault that helped bring an end to World War II. While France is planning to open up to vaccinated visitors starting next week, that comes too late for the D-Day anniversary. So for the second year in a row, most public commemoration events have been cancelled. A few solemn ceremonies have been maintained, in the presence of dignitaries and a few guests only. (Photo by David Vincent/AP Photo) 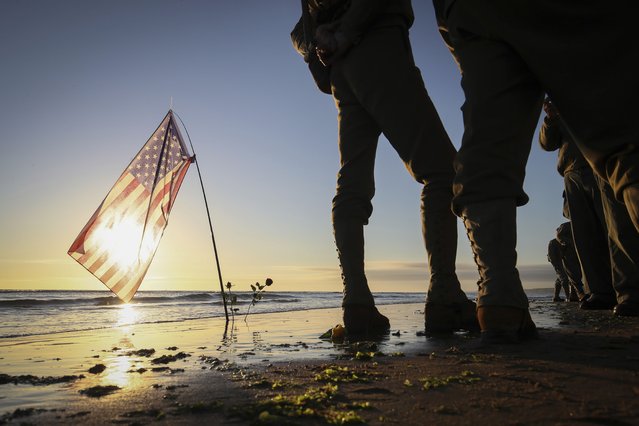 World War II reenactors gather on Omaha Beach in Saint-Laurent-sur-Mer, Normandy, Sunday, June 6, 2021, the day of 77th anniversary of the assault that helped bring an end to World War II. While France is planning to open up to vaccinated visitors starting next week, that comes too late for the D-Day anniversary. So for the second year in a row, most public commemoration events have been cancelled. (Photo by David Vincent/AP Photo) 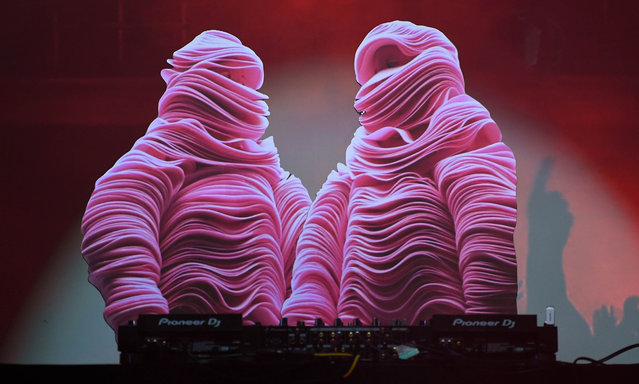 Cardboard cut-outs of Chemical Brothers dancers are seen during the “The Chemical Brothers: Don't Think” Screening at Clapham Grand on June 05, 2021 in London, England. (Photo by Stuart C. Wilson/Getty Images) 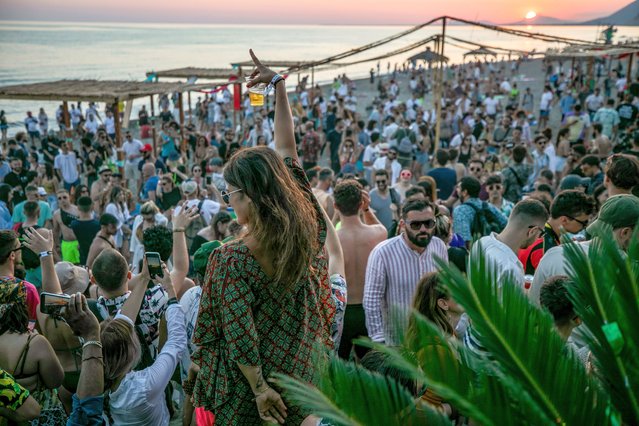 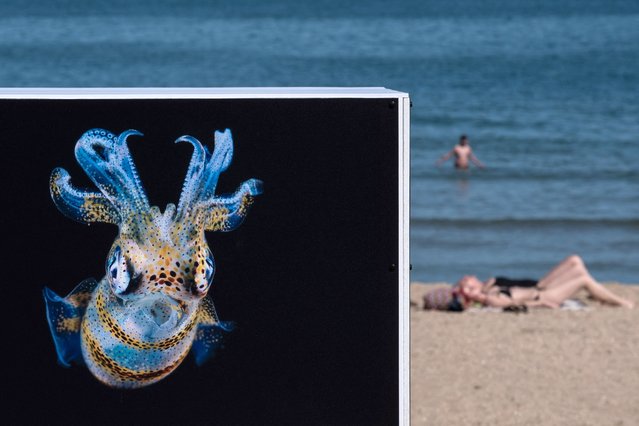