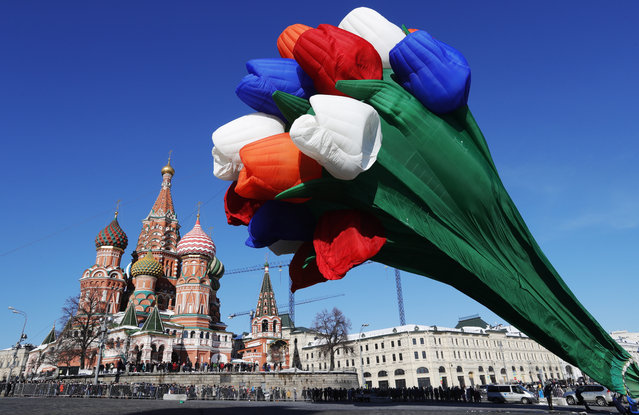 A hot air balloon in the shape of a tulip bouquet is being launched in Vasilyevsky Spusk Square near Moscow' s Kremlin to mark International Women' s Day on March 8, 2018. (Photo by Mikhail Japaridze/TASS) 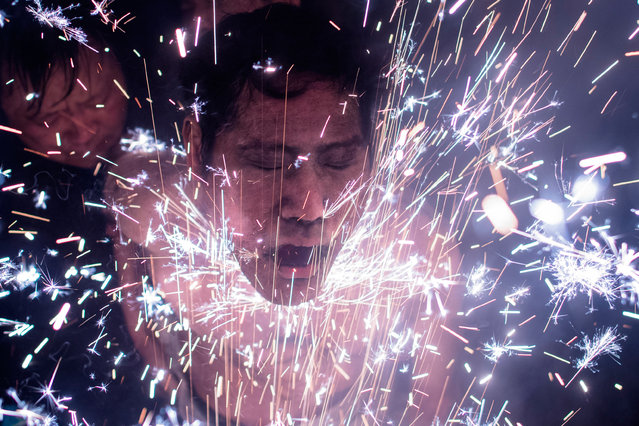 Lin Xiwei, a 36-years-old shoemaker from Putian, dressed as a local deity performs the “eating flowers” ritual in Xiaohu, Baitang, in Fujian province on March 8, 2018. Working themselves into a trance, bare-chested men in eastern China lean into incandescent fountains of sparks to cleanse themselves of evil spirits and ensure a fortuitous new year. The spectacular scene takes place annually in villages such as Xiaohu in coastal Fujian province, which is home to an array of colourful centuries-old Lunar New Year rites linked to ancient customs and local gods. (Photo by Johannes Eisele/AFP Photo) 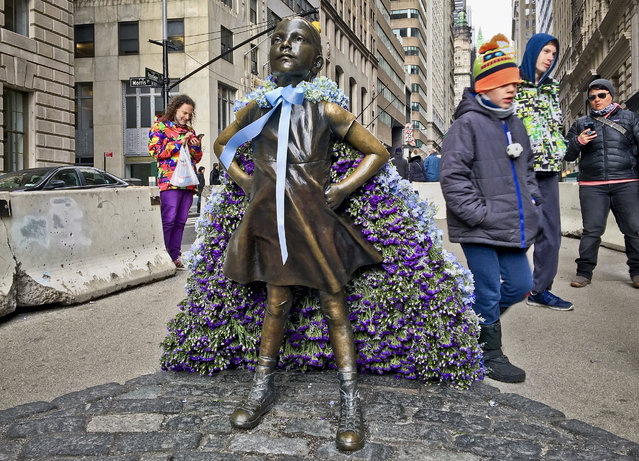 Wall Street's “Fearless Girl” statue is draped with a bouquet of flowers to mark International Women's Day, Thursday March 8, 2018, in New York. The statue, which has been a New York City tourist attraction since it was installed to mark International Women's Day one year ago, is staying put for now while city officials figure out where it's going next to spread its message of female empowerment. (Photo by Karen Matthews/AP Photo) 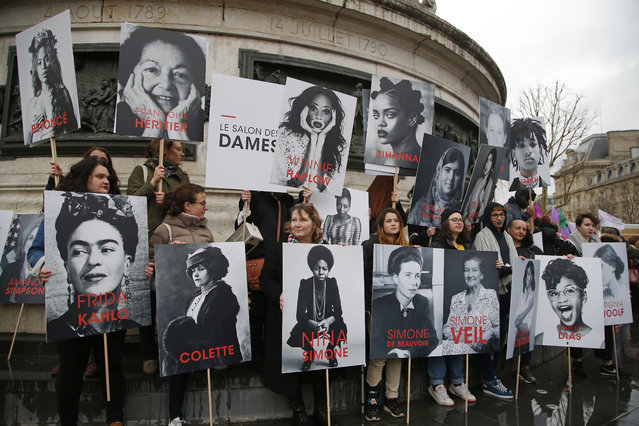 Women hold posters of famous feminists during a gathering to mark International Women's Day in Paris, Thursday, March 8, 2018. Statistics show at the same age and equivalent job, there is a 9 percent gap between the wages of men and women in France. (Photo by Michel Euler/AP Photo) 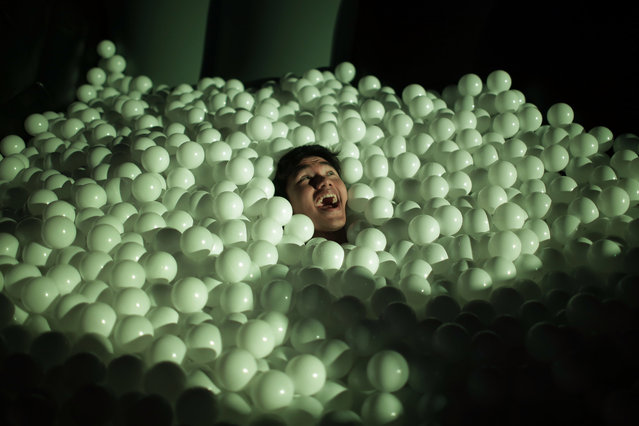 A man is partially submerged in an inflatable play station filled with plastic balls on Thursday, March 8, 2018, in Singapore. The Art-Zoo Inflatable Park is part of the i Light Marina Bay festival which showcases large scale creative installations within the urban city space. (Photo by Wong Maye-E/AP Photo) 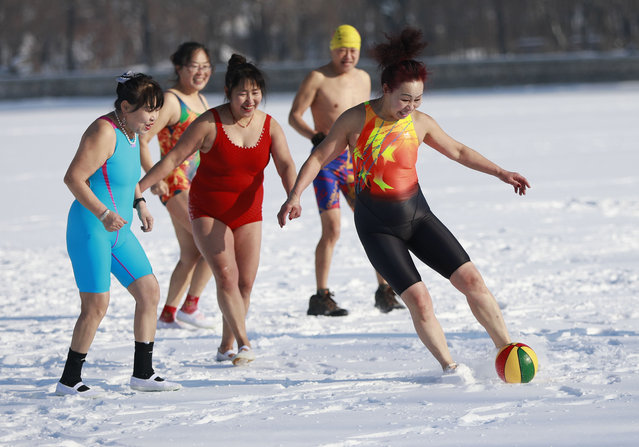 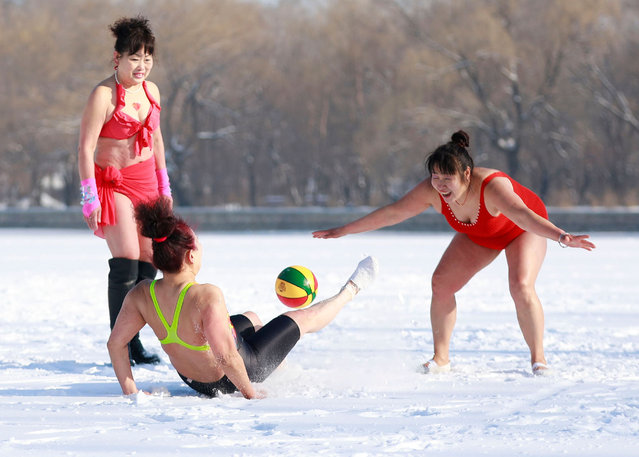 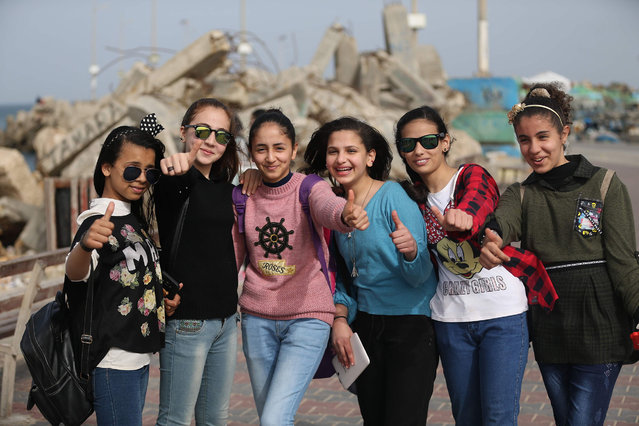 Palestinian school girls pose for a group picture during a school trip in Gaza City on March 8, 2018 to mark Women's Day. (Photo by Mohammed Abed/AFP Photo) 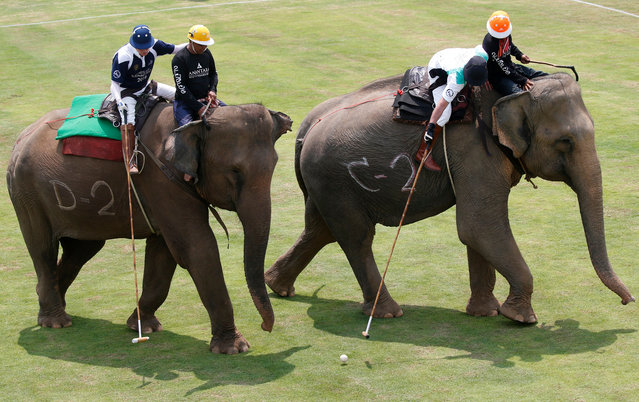 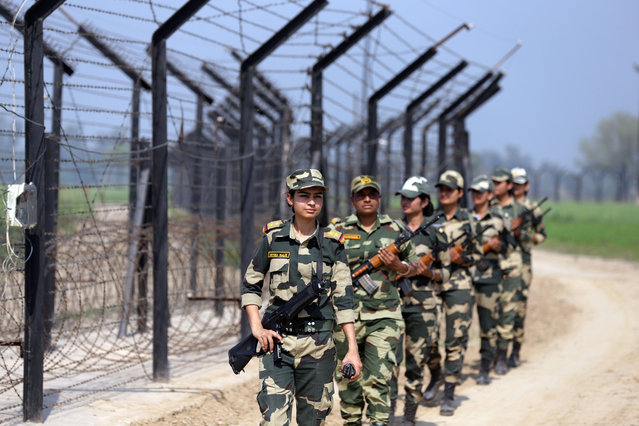 Female Indian Border Security Force's (BSF) soldiers patrol along the India-Pakistan border during International Women's Day near Border Outpost Pul Moran, some 37 km from Amritsar, India, 08 March 2018. International Women's Day is globally observed on 08 March, to highlight the struggles of women around the globe. March 08 was proclaimed by the United Nations General Assembly as the day for women's rights in 1977. (Photo by Raminder Pal Singh/EPA/EFE) 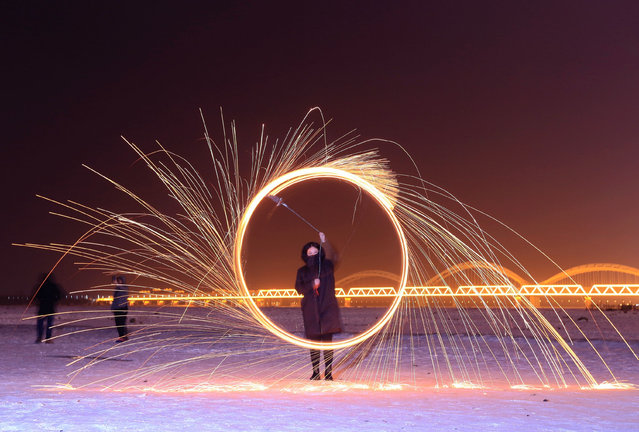 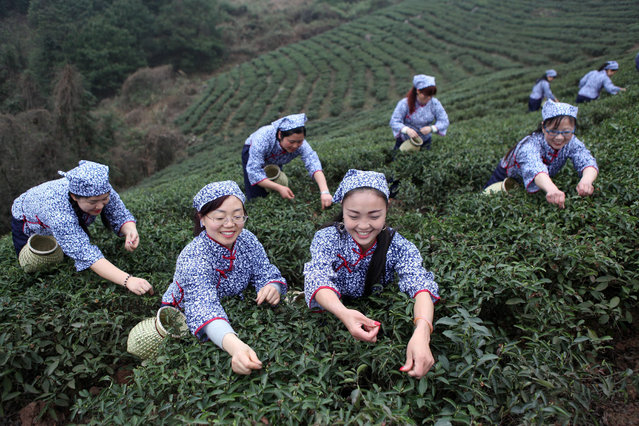 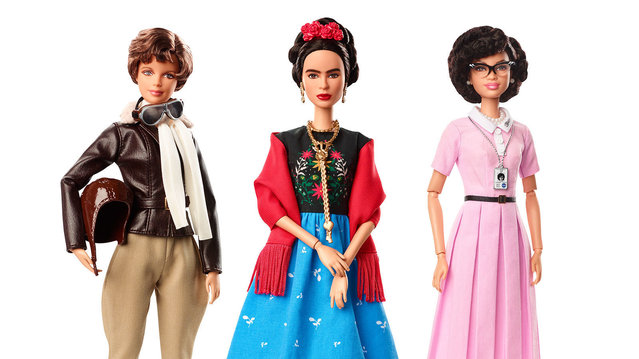 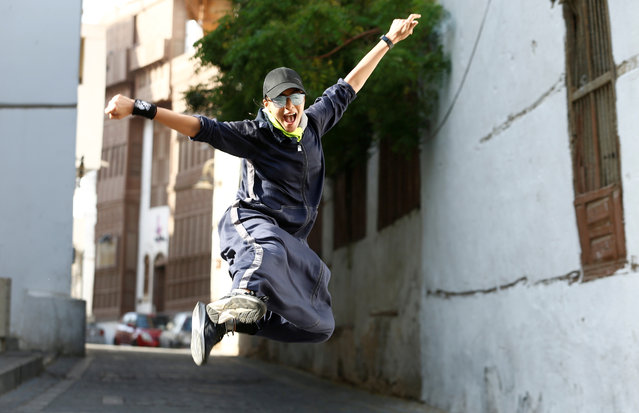 Saudi woman Nouf Khayat, a Zumba instructor, jumps during a running event marking International Women's Day in Old Jeddah, Saudi Arabia March 8, 2018. “I am a mother and a woman in this society. Finally we are capable of speaking up and of expressing our passions. The time has come to speak about the things that we can do”, she said. (Photo by Faisal Al Nasser/Reuters) 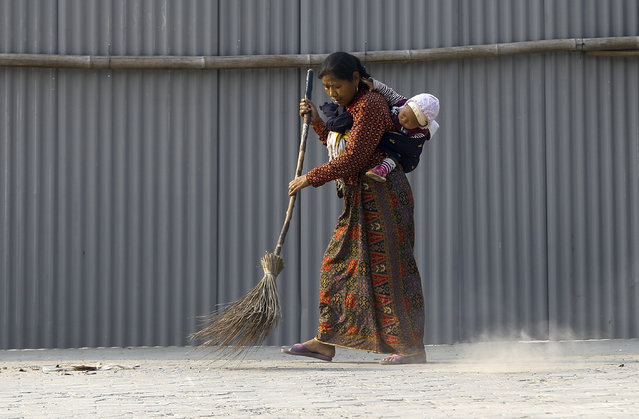 A Nepalese women looks after a grandchild as a rally takes place to mark International Women's Day in Kathmandu, Nepal, 08 March 2018. According to reports, thousands of women affiliated with various political parties and non-government organizations participated in the rally, calling for equal social, economic and politics rights for women. (Photo by Narendra Shrestha/EPA/EFE) 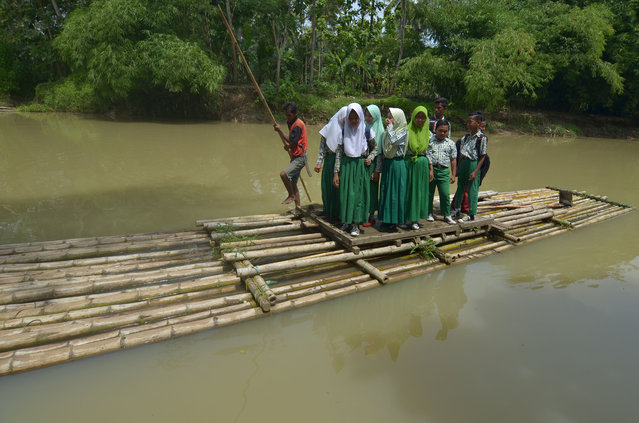 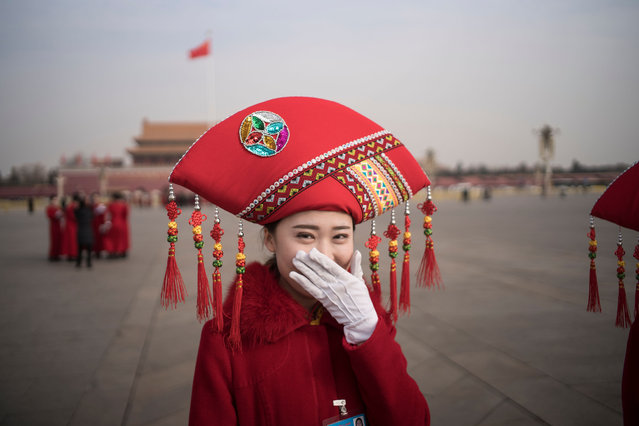 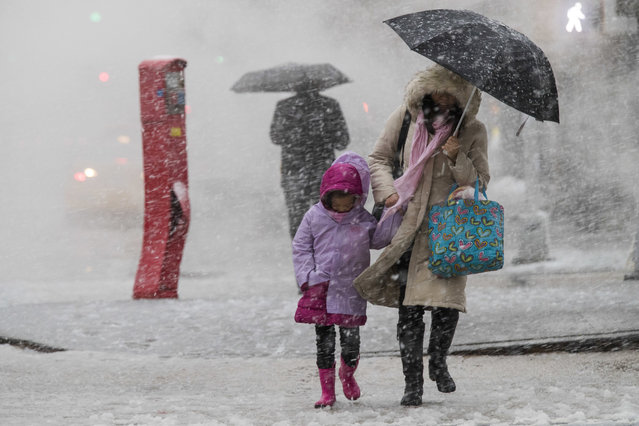 Pedestrians walk along Delancey St. during a snowstorm, Wednesday, March 7, 2018, in New York. The New York metro area was hit with another winter storm Wednesday just days after another nor'easter hammered the region with high winds. (Photo by Mary Altaffer/AP Photo) 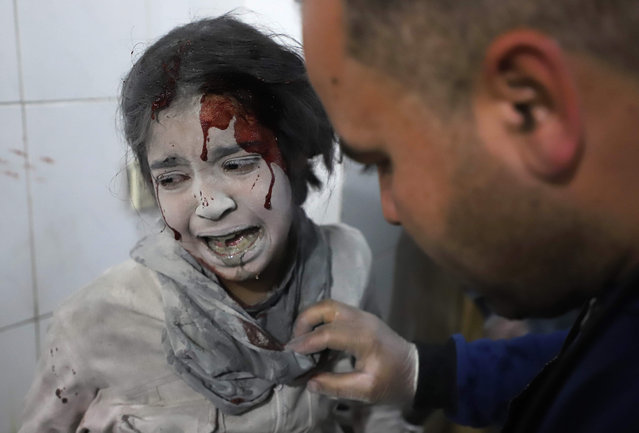 A Syrian girl receives treatment as victims of reported regime air strikes on Hamouria, Saqba and Kafr Batna are brought to a make-shift hospital in the rebel-held enclave of Eastern Ghouta on March 7, 2018. (Photo by Amer Almohibany/AFP Photo) 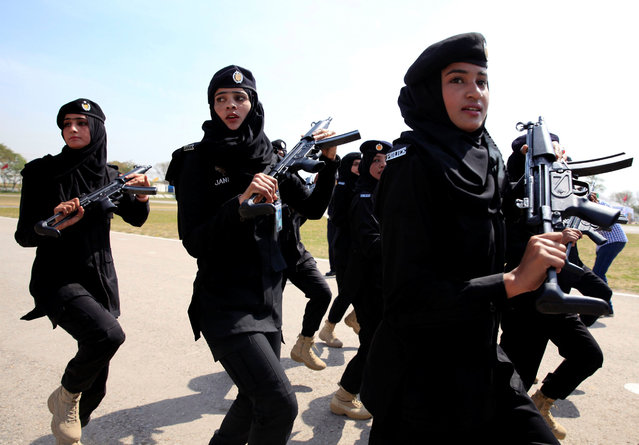 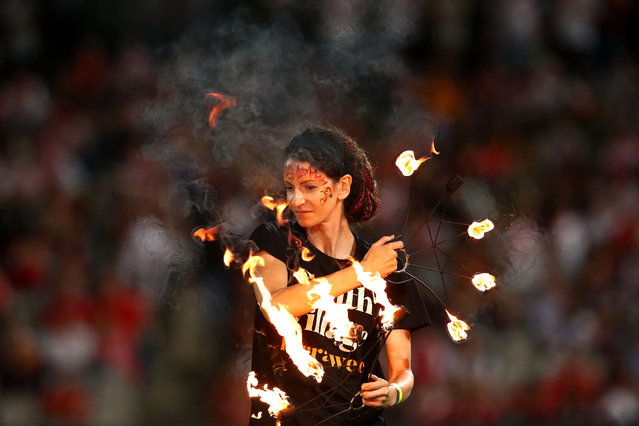 Fire dancers perform ahead of the round one NRL match between the St George Illawarra Dragons and the Brisbane Broncos at UOW Jubilee Oval on March 8, 2018 in Sydney, Australia. (Photo by Mark Kolbe/Getty Images) 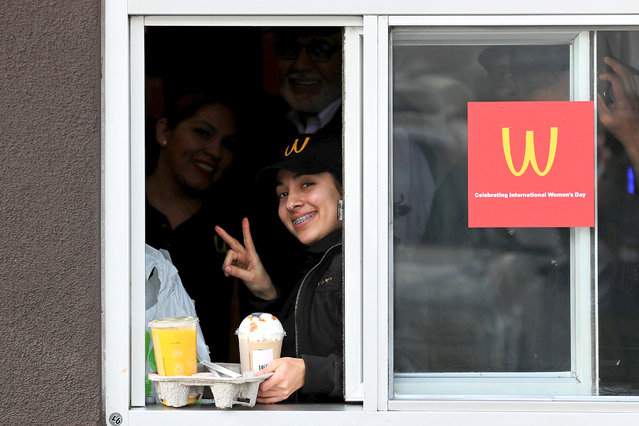 A worker works at drive through window as McDonald's iconic «M» logo is turned upside down in honour of International Women's Day in Lynwood, California, U.S., March 8, 2018. (Photo by Mike Blake/Reuters) 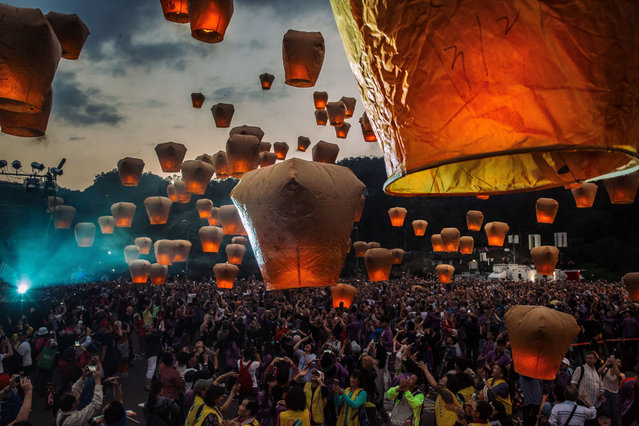 Tourists release sky lantern during the Pingxi lantern festival on March 2, 2018 in Pingxi, Taiwan. Pingxi, a Taiwanese district known for its old train tracks and lantern launchings, hosts the Pingxi Sky Lantern Festival annually to celebrate the last day of the Lunar New Year by releasing thousands of lanterns which each carrying its flame into the night. The former coal-mining town is lined with workshops which helps visitors build lanterns with paper and glue but critics have said the event is has become unsustainable and angered the locals as up to 600,000 half-burnt lanterns crashes back to earth into surrounding mountains. Sky lanterns were invented in ancient China between AD 220-265 by military strategist Zhuge Liang to transmit information and first introduced in Taiwan in the 19th century. They were originally released as prayers for the coming year at the beginning of the spring planting season but due to xxx, Taiwanese government has only allowed the release of sky lanterns in the rural district. (Photo by Billy H.C. Kwok/Getty Images)
Edit Del
10 Mar 2018 08:12:00, post received 0 comments
Publication archive:
←   →
Popular tags:
All tags
Last searches: