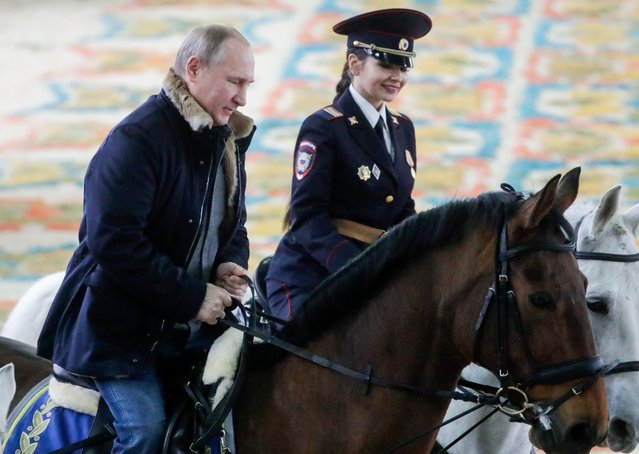 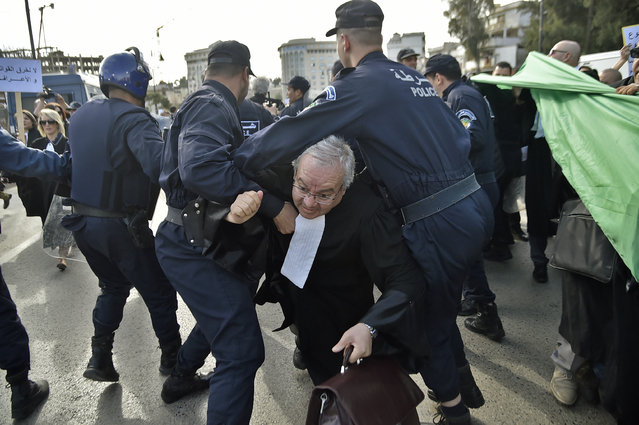 Algerian police disperse a protest by lawyers and journalists against their ailing president's bid for a fifth term in power, in Algiers on March 7, 2019. One thousand Algerian lawyers staged a demonstration today in front of the Constitutional Council against President Abdelaziz Bouteflika's re-election bid, saying his ill health should disqualify him from the race. The 82-year-old Bouteflika uses a wheelchair and has rarely been seen in public since suffering a stroke in 2013, and his bid to secure a fifth term at the April 18 election has sparked waves of protests. (Photo by Ryad Kramdi/AFP Photo) 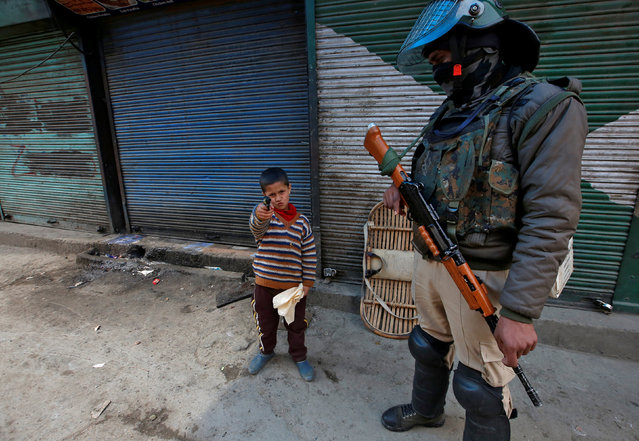 A boy plays with his toy pistol next to an Indian policeman standing guard in front of closed shops during a strike called by Kashmiri separatists against the arrest of Yasin Malik, Chairman of Jammu Kashmir Liberation Front (JKLF), a separatist party, in Srinagar March 8, 2019. (Photo by Danish Ismail/Reuters) 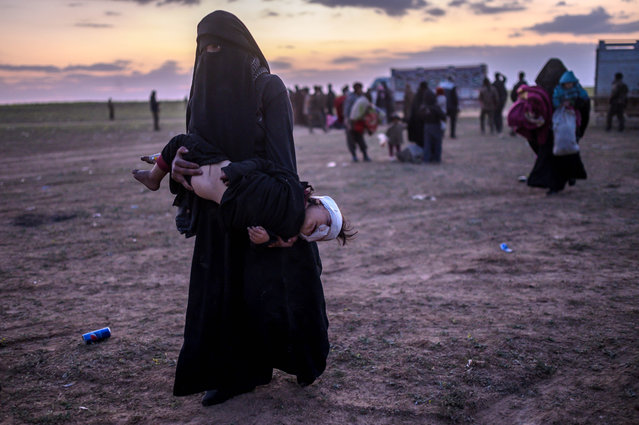 A fully veiled woman carries her injured child as she walks to members of the Kurdish-led Syrian Democratic Forces (SDF) just after leaving the Islamic State group's last holdout of Baghouz, in the eastern Syrian Deir Ezzor province on March 4, 2019. The capture of Baghouz would mark the end of IS territorial control in the region and deal a death blow to the “caliphate”, which once covered huge swathes of Syria and Iraq. (Photo by Bulent Kilic/AFP Photo) 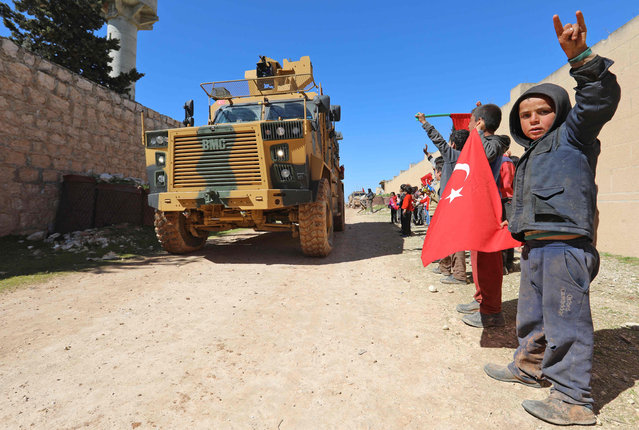 An armoured Turkish military vehicle drives on a patrol along a road in the de-militarised zone in the western countryside of Syria's Aleppo province near the town of Al-Eis on March 8, 2019. In September 2018, Syrian rebel backer Turkey and regime ally Russia inked a deal to set up a buffer zone in northern Syria. Russia halted an imminent regime offensive many feared could lead to the Syrian conflict's worst bloodbath yet, in exchange for which Turkey was to remove jihadists from the edges of the region. (Photo by Omar Haj Kadour/AFP Photo) 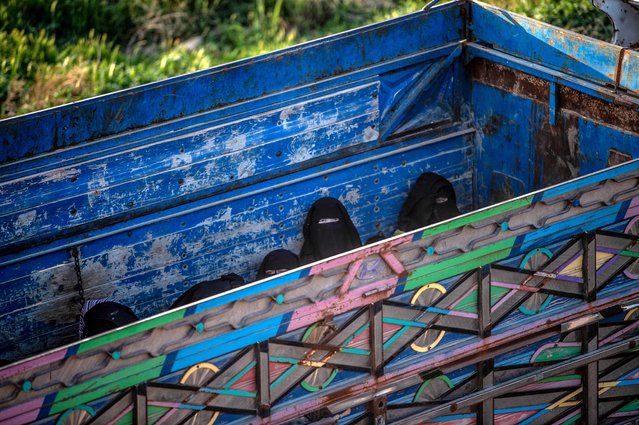 Women and children who fled the Islamic State group's last holdout of Baghouz, in Syria's northern Deir Ezzor province, ride in the back of a truck in an area controlled by the Kurdish-led Syrian Democratic Foces (SDF) on March 4, 2019. Kurdish-led forces backed by US warplanes rained artillery fire and air strikes besieged and outgunned jihadists making a desperate last stand in a Syrian village. (Photo by Bulent Kilic/AFP Photo) 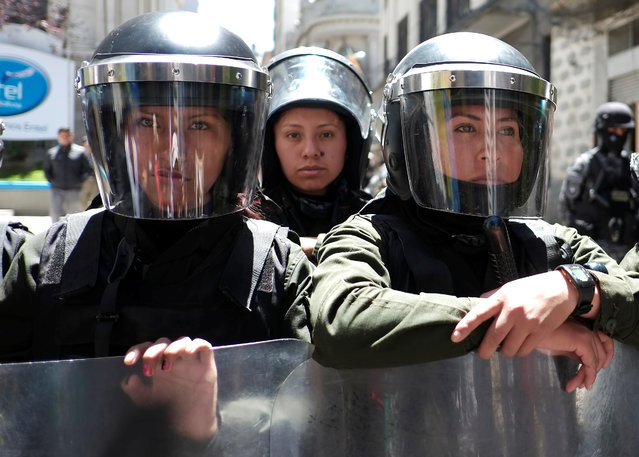 Riot policewomen stand guard next to vice presidency building during a rally on the Women's Day, in La Paz, Bolivia, March 8, 2019. (Photo by David Mercado/Reuters) 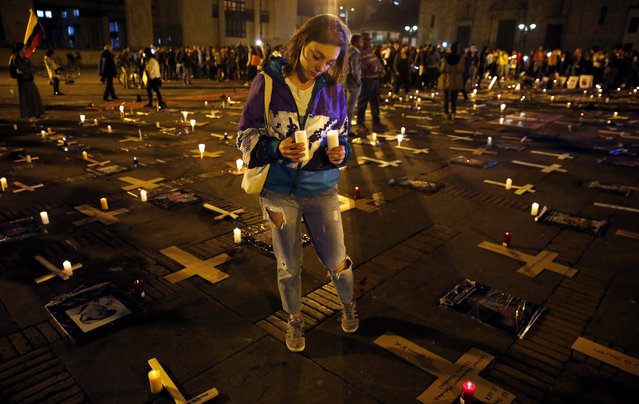 People participate in a rally for the Day of Dignity for the Victims of State Crimes at the Plaza de Bolivar in Bogota, Colombia, 06 March 2019. (Photo by Leonardo Muñoz/EPA/EFE) 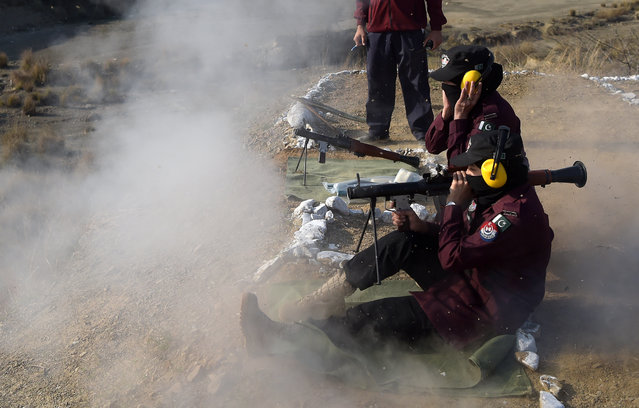 Female Pakistani police commandos use rocket launcher during a exercise at a police training centre in Nowshera, a district in the Khyber Pakhtunkhwa Province on March 7, 2019. (Photo by Abdul Majeed/AFP Photo) 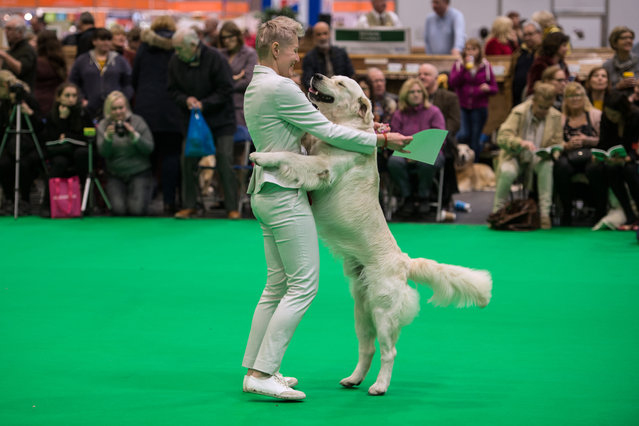 A woman embraces her golden retriever dog after it was awarded a prize on the first day of the Crufts dog show at the National Exhibition Centre in Birmingham, central England, on March 7, 2019. (Photo by Oli Scarff/AFP Photo) 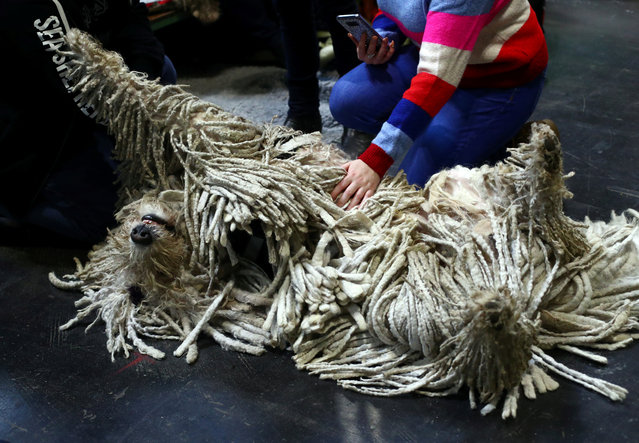 A Komondor relaxes during the second day of the Crufts Dog Show in Birmingham, Britain, March 8, 2019. (Photo by Hannah McKay/Reuters) 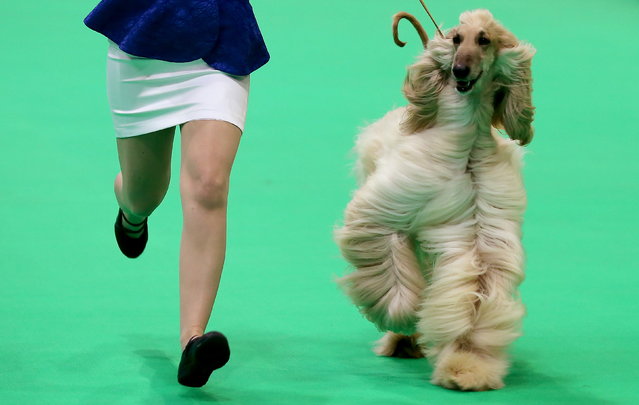 An Afghan Hound on show during the annual Crufts Dog Show at the NEC Arena in Birmingham, Britain, 7 March 2019. The world's largest dog show will be held from 7 to 10 March with 22,000 dogs competing for the world class title of Crufts Best In Show. (Photo by Nigel Roddis/EPA/EFE) 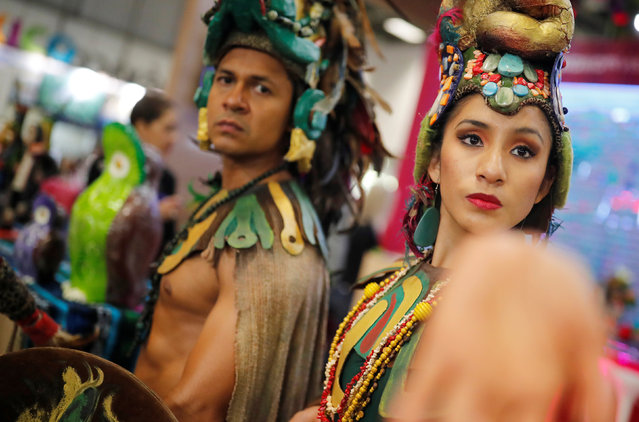 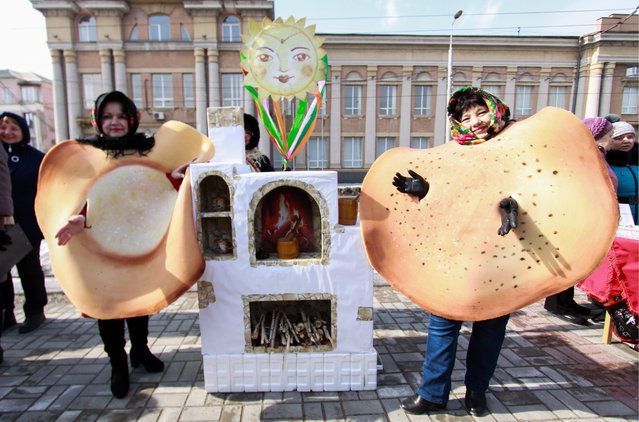 Citizens gather for the Maslenitsa festival (Pancake Week) that celebrates the end of winter and marks the arrival of spring, in the city of Makeyevka, Donetsk Regionm Ukraine on March 7, 2019. (Photo by Valentin Sprinchak/TASS) 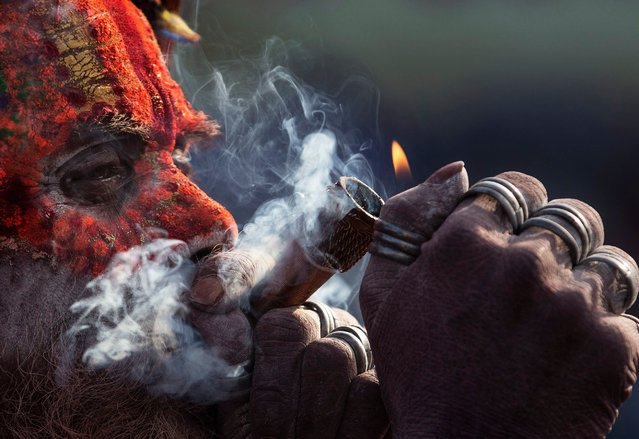 A sadhu, or holy man, smokes marijuana from a clay pipe at the Pashupati Temple in Kathmandu, Nepal, March 4, 2019, during celebrations marking the Hindu festival of Maha Shivaratri. (Photo by Narendra Shrestha/EPA/EFE/Rex Features/Shutterstock) 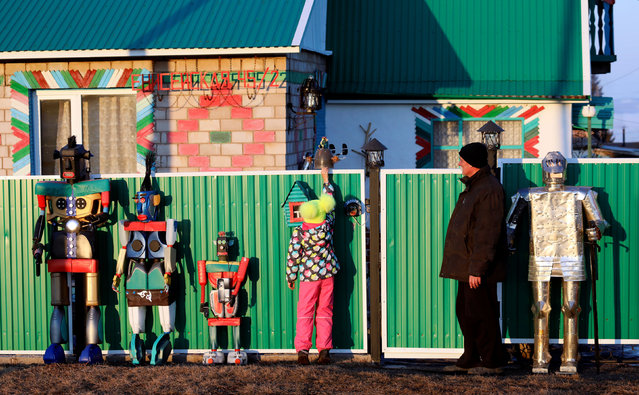 Local resident Gennady Chereshkevich speaks with his granddaughter Vlada while showing fancy sculptures, which he made of plastic, metal canisters and other materials for the decoration of his house, in the settlement of Novosyolovo south of Krasnoyarsk, Russia March 7, 2019. (Photo by Ilya Naymushin/Reuters) 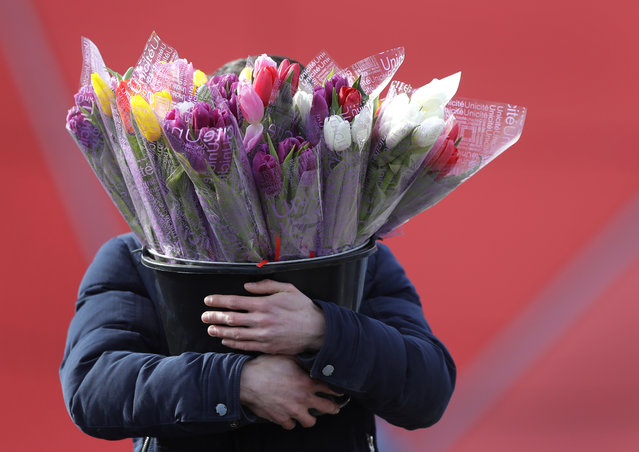 A man carries a bucket with bouquets of tulips at a street market on the eve of the International Women's Day in Minsk, Belarus, Thursday, March 7, 2019. International Women's Day on March 8 is an official holiday in Belarus, where men traditionally give flowers and gifts to female relatives, friends and colleagues. (Photo by Sergei Grits/AP Photo) 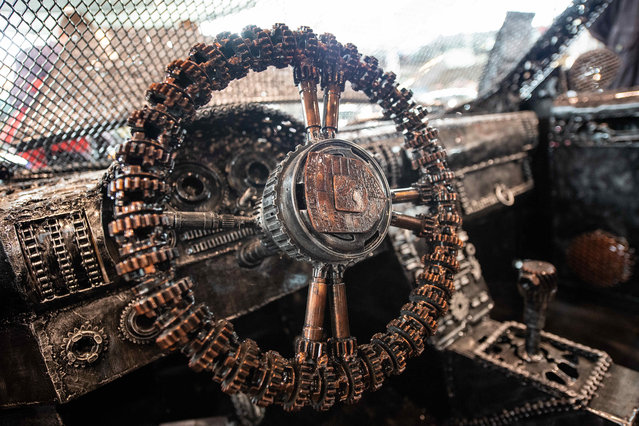 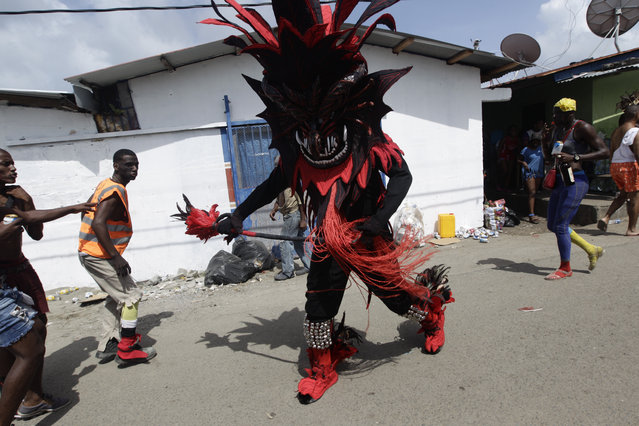 A man dressed in a devil costume approaches pedestrians during the “Diablos y Congos”, an Ash Wednesday ritual that marks the end of Carnival and the start of the Lenten season in Nombre de Dios, Panama, Wednesday, March 6, 2019. The ritual involves dancers in devil costumes who go about scaring the “sinners” who have been partying for days during carnival. (Photo by Arnulfo Franco/AP Photo) 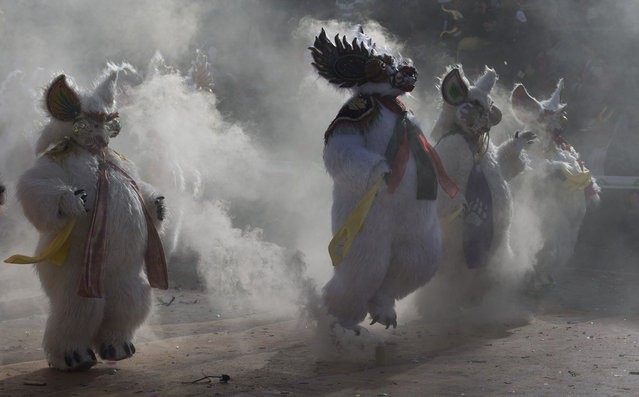 Dancers perform the traditional “Diablada”, or Dance of the Devils, during carnival celebrations in Oruro, Bolivia, Saturday, March 2, 2019. The festival features folk dances, costumes, crafts, music and up to 20 hours of continuous partying. (Photo by Juan Karita/AP Photo) 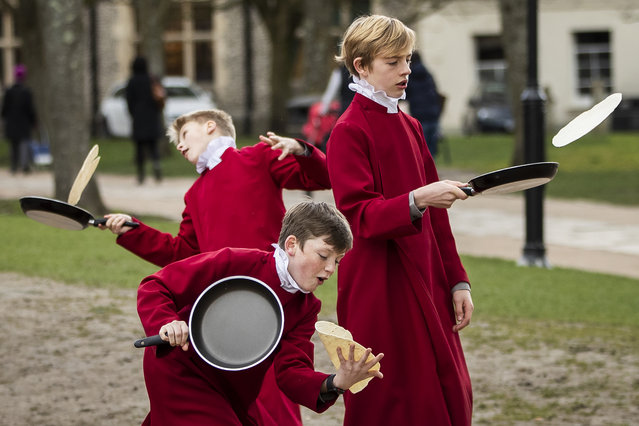 Choristers from Winchester Cathedral joke around in between being posed up for pictures by photographers on March 5, 2019 in Winchester, England. Winchester Cathedral held it's inaugural Shrove Tuesday Pancake day race in the Cathedral grounds today with money raised going to local charities. (Photo by Dan Kitwood/Getty Images) 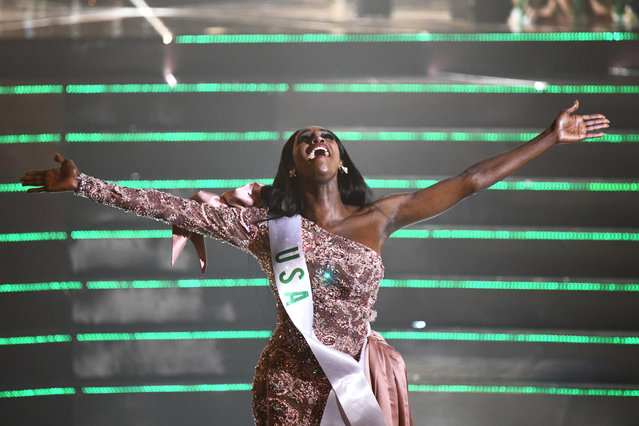 Contestant Jazell Barbie Royale of the US reacts after winning the Miss International Queen 2019 transgender beauty pageant in Pattaya on March 8, 2019. (Photo by Jewel Samad/AFP Photo) 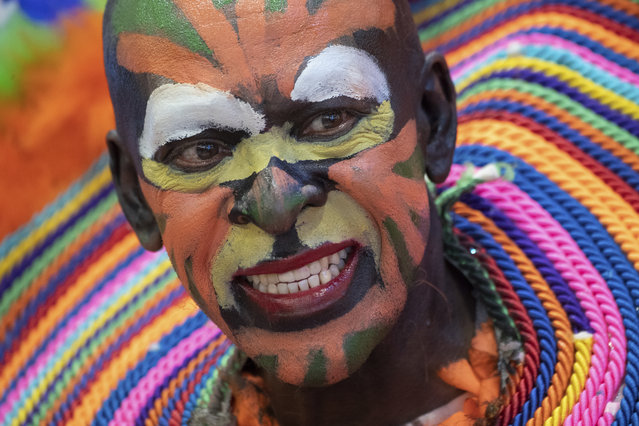 A man with a colorful painted face promotes traveling to the Dominican Republic at the ITB tourism fair in Berlin, Germany, Friday, March 8, 2019. (Photo by Ralf Hirschberger/dpa via AP Photo) 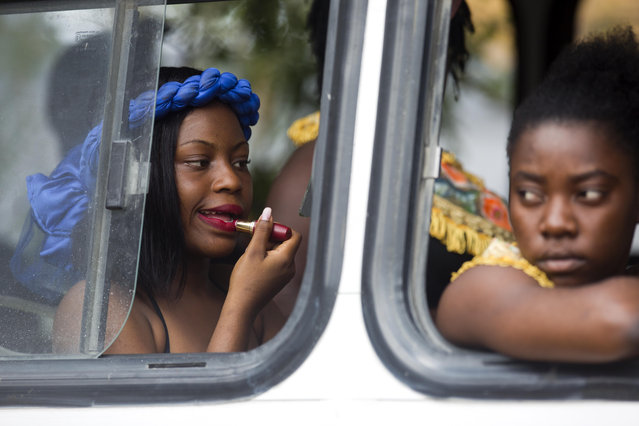 A dancer applies lipstick onboard a bus before the start of the Carnival parade in the Carrefour district of Port-au-Prince, Haiti, Tuesday, March 5, 2019. (Photo by Dieu Nalio Chery/AP Photo) 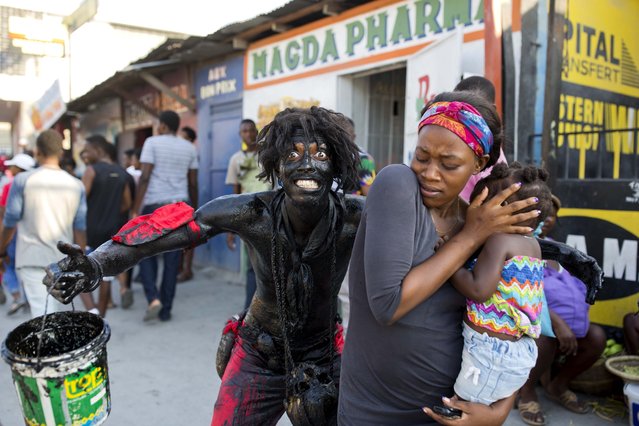 A reveler dressed as a devil with his body smothered with mud and oil, scares a woman and her daughter during the Carnival parade in the Carrefour district of Port-au-Prince, Haiti, Tuesday, March 5, 2019. (Photo by Dieu Nalio Chery/AP Photo) 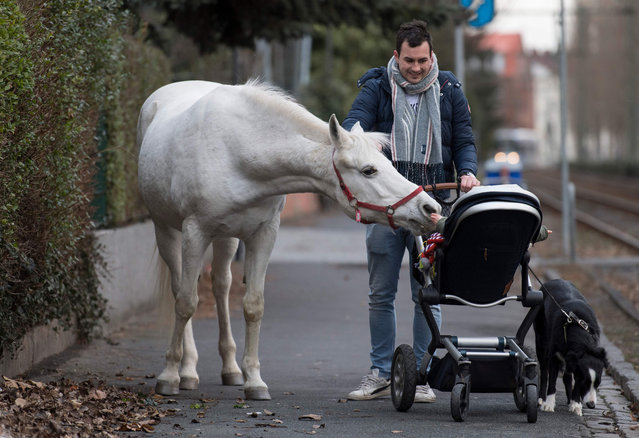 The Arabian mare “Jenny” curiously sniffs at the child of Raphael Wöllstein, who is on his way to the train, on her daily walk through the Fechenheim district of Frankfurt, Germany on March 8, 2019. Her owner opens the stable door for the 22-year-old horse every morning. Then the animal can decide for itself where it wants to spend the day. So that nobody thinks she's escaped, a sign with the inscription “My name is Jenny, didn't run away, just go for a walk” is on the halter. (Photo by Boris Roessler/dpa)
Edit Del
10 Mar 2019 00:07:00, post received 0 comments
Publication archive:
←   →
Popular tags:
All tags
Last searches: