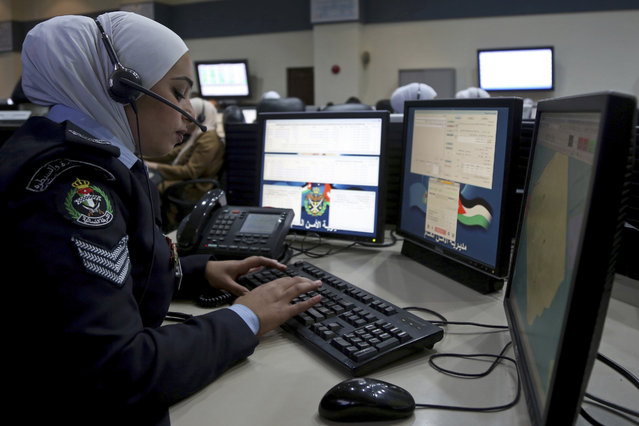 In this Tuesday, March 20, 2018 photo, a dispatcher takes down information from a caller at Jordan's 911 emergency call center in Amman, Jordan. The U.S.-funded operation is part of a broader program of upgrading Jordan's domestic law enforcement efforts by the State Departments Anti-Terrorism Assistance. (Photo by Raad Adayleh/AP Photo) 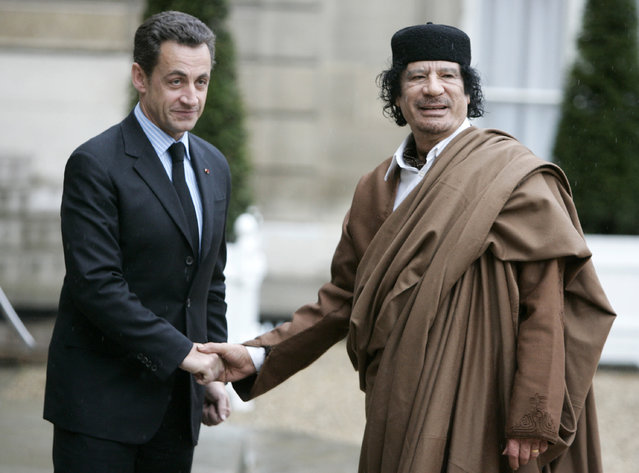 In this December 10 2007 file photo, French President Nicolas Sarkozy, left, greets Libyan leader Col. Moammar Gadhafi upon his arrival at the Elysee Palace, in Paris. Former French President Nicolas Sarkozy was placed in custody on Tuesday March 20, 2018 as part of an investigation that he received millions of euros in illegal financing from the regime of the late Libyan leader Moammar Gadhafi. (Photo by Francois Mori/AP Photo) 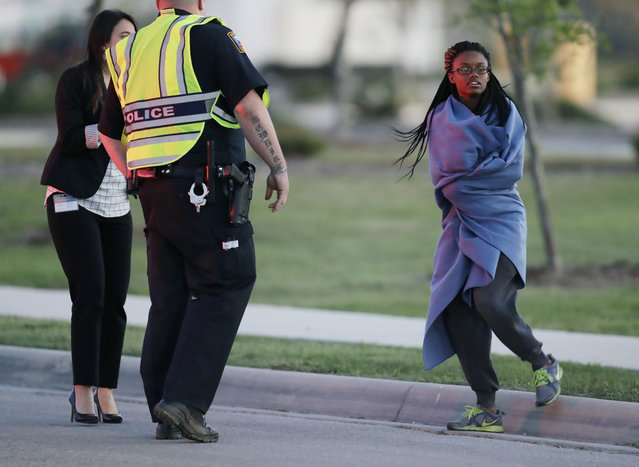 An employee wrapped in a blanket talks to a police officer after she was evacuated at a FedEx distribution center where a package exploded, Tuesday, March 20, 2018, in Schertz, Texas. Authorities believe the package bomb is linked to the recent string of Austin bombings. (Photo by Eric Gay/AP Photo) 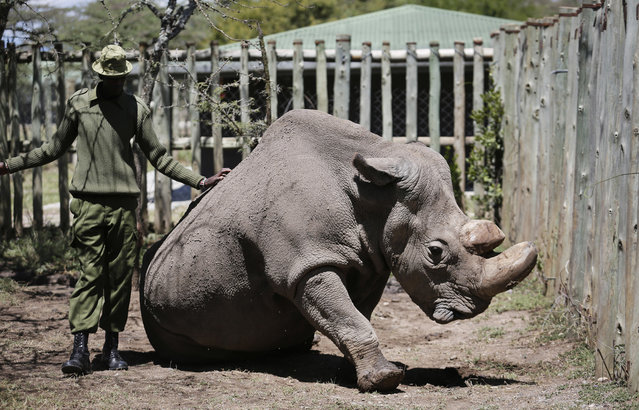 In this photo taken Wednesday, May 3, 2017, a ranger takes care of Sudan, the world's last male northern white rhino, at the Ol Pejeta Conservancy in Laikipia county in Kenya. Sudan has died after “age-related complications” researchers announced Tuesday, saying he “stole the heart of many with his dignity and strength”. The world's last male northern white rhino has died, leaving only two females of its subspecies alive in the world. (Photo by AP Photo) 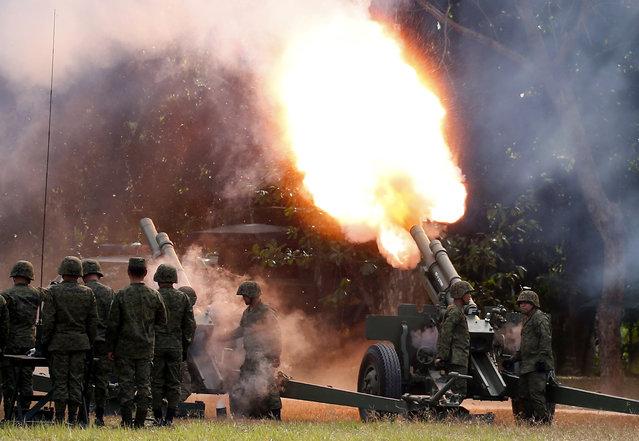 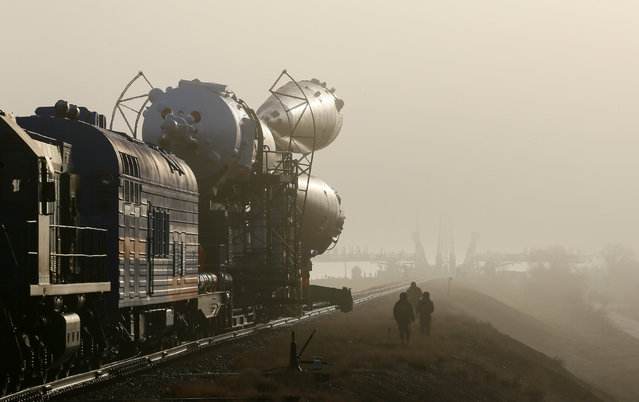 Security personnel escort the Soyuz MS-08 spacecraft for the next International Space Station (ISS) crew, consisting of astronauts Drew Feustel and Ricky Arnold of the U.S and crewmate Oleg Artemyev of Russia, as it is transported from an assembling hangar to the launchpad ahead of its upcoming launch, at the Baikonur Cosmodrome, Kazakhstan March 19, 2018. (Photo by Shamil Zhumatov/Reuters) 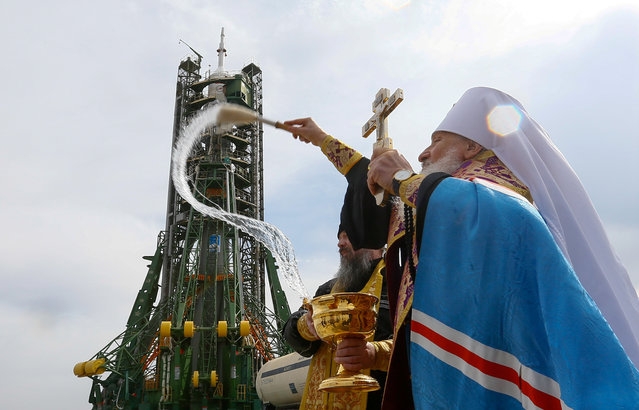 An Orthodox priest conducts a blessing in front of the Soyuz MS-08 spacecraft set on the launchpad ahead of its upcoming launch with International Space Station (ISS) crew, at the Baikonur Cosmodrome in Kazakhstan March 20, 2018. (Photo by Shamil Zhumatov/Reuters) 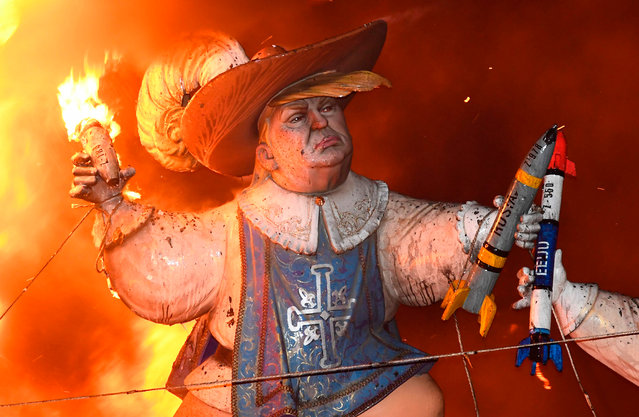 Ninot depicting US President Donald Trump burns on the last night of the Fallas Festival in Valencia on March 19, 2018. Fallas are gigantic structures made of cardboard portraying current events and personalities in which individual figures or Ninots are placed. The Fallas are burnt in the streets of Valencia as a tribute to St Joseph, patron saint of the carpenters' guild. (Photo by Jose Jordan/AFP Photo) 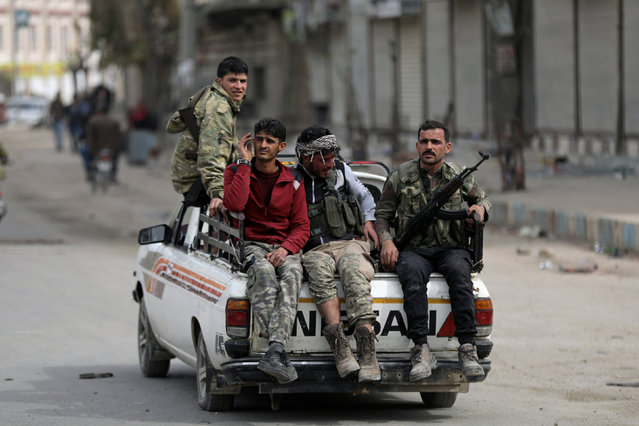 Turkish-backed Free Syrian army fighters ride on a back of a truck in Afrin, Syria March 19, 2018. (Photo by Khalil Ashawi/Reuters) 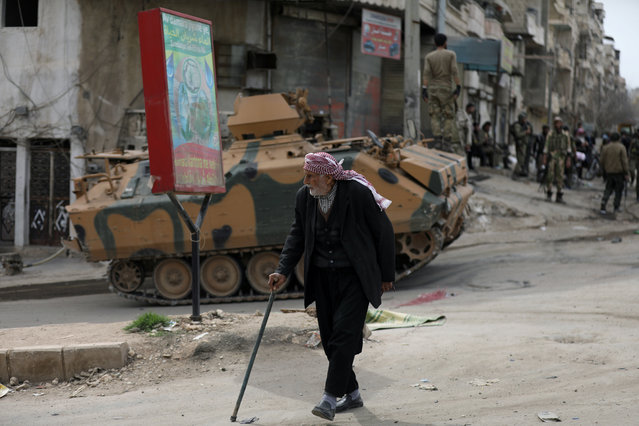 A Kurdish elderly man walks with a cane in Afrin, Syria on March 19, 2018. (Photo by Khalil Ashawi/Reuters) 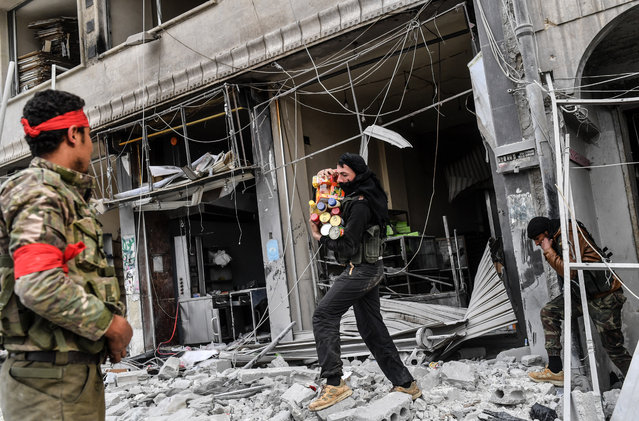 Turkish-backed Syrian rebels loot shops after seizing control of the northwestern Syrian city of Afrin from the Kurdish People's Protection Units (YPG) on March 18, 2018. In a major victory for Ankara's two-month operation against the Kurdish People's Protection Units (YPG) in northern Syria, Turkish-led forces pushed into Afrin apparently unopposed, taking up positions across the city. (Photo by Bulent Kilic/AFP Photo) 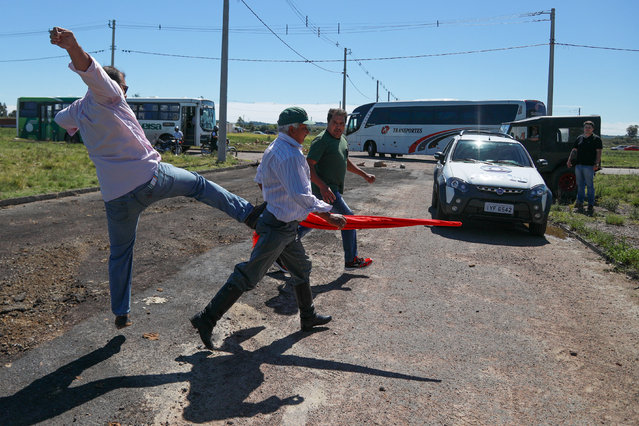 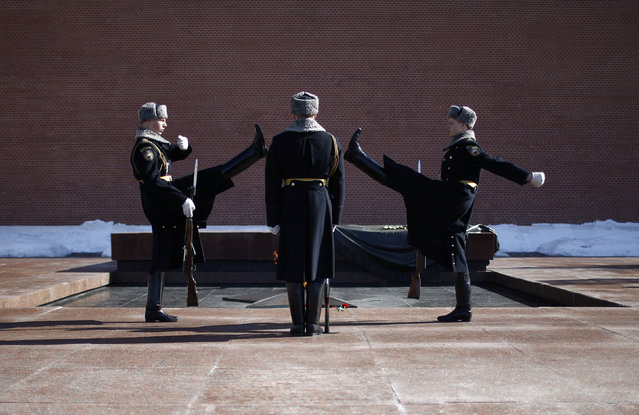 Members of the honour guard march during the changing of guards ceremony at the Tomb of the Unknown Soldier by the Kremlin wall in central Moscow, Russia March 20, 2018. (Photo by David Mdzinarishvili/Reuters) 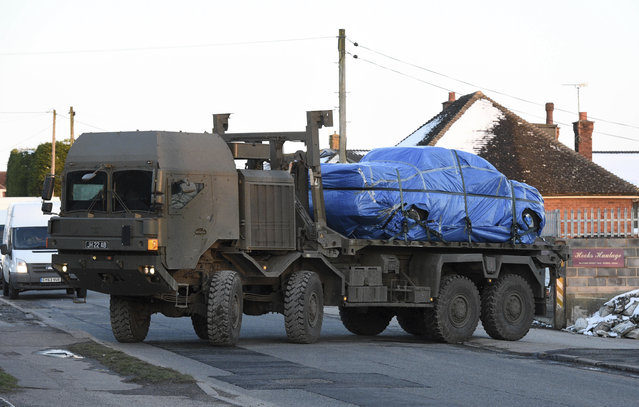 A vehicle wrapped in blue tarpaulin is removed from Larkhill Road in Durrington, 10 miles (16 kilometers) north of Salisbury, England, on the back of an Army lorry, Monday March 19, 2018, as the investigation into the suspected nerve agent attack on Russian double agent Sergei Skripal and his daughter Yulia continues. A road in the village of Durrington was closed off and tents were erected as the military and police searched for clues Monday. (Photo by Ben Birchall/PA Wire via AP Photo) 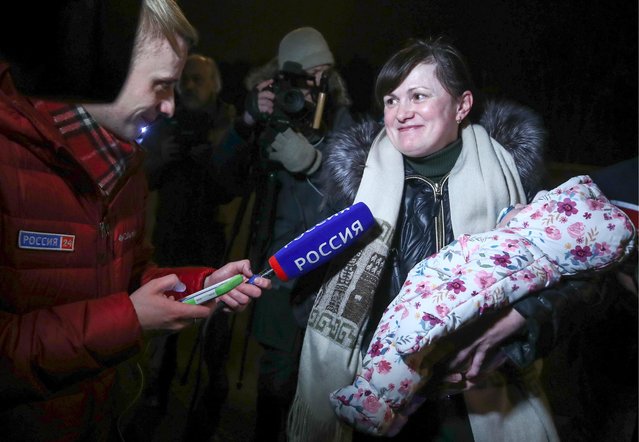 Journalists talk to the Russian diplomats and their families who have arrived at Moscow's Vnukovo Airport from London. The UK has expelled 23 Russian diplomats over the poisoning of former Russian military intelligence officer Sergei Skripal and his daughter Yulia in Salisbury on March 4, 2018. (Photo by Valery Sharifulin/TASS via Getty Images) 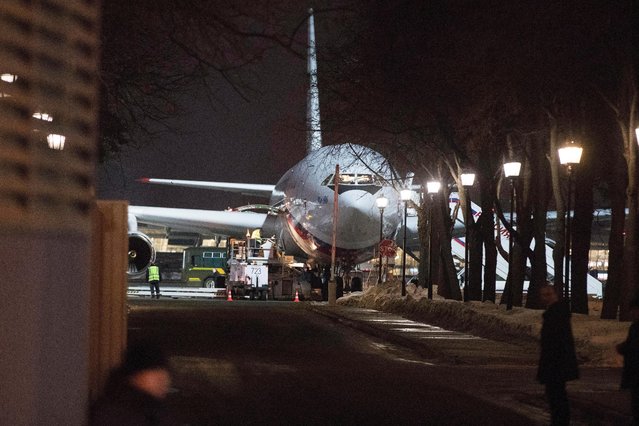 A plane which carried Russian diplomats and their family members ordered to leave Britain as part of a standoff over a nerve agent attack on British soil, at Vnukovo 2 government airport outside Moscow, Russia, Tuesday, March 20, 2018. Nearly two dozen Russian diplomats expelled by Britain over the poisoning of an ex-spy arrived home Tuesday, while a scientist involved in the creation of the nerve agent said it could be manufactured by other countries. (Photo by Pavel Golovkin/AP Photo) 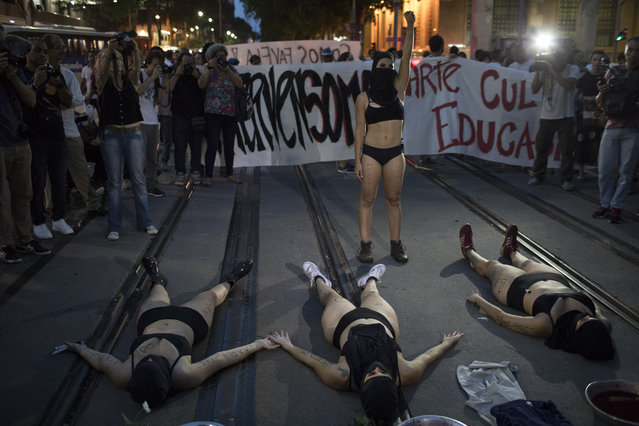 Demonstrators perform during a protest against the murder of councilwoman Marielle Franco in Rio de Janeiro, Brazil, Tuesday, March 20, 2018. Franco's murder came just a month after the government put the military in charge of security in Rio, which is experiencing a sharp spike in violence less than two years after hosting the 2016 Summer Olympics. (Photo by Leo Correa/AP Photo) 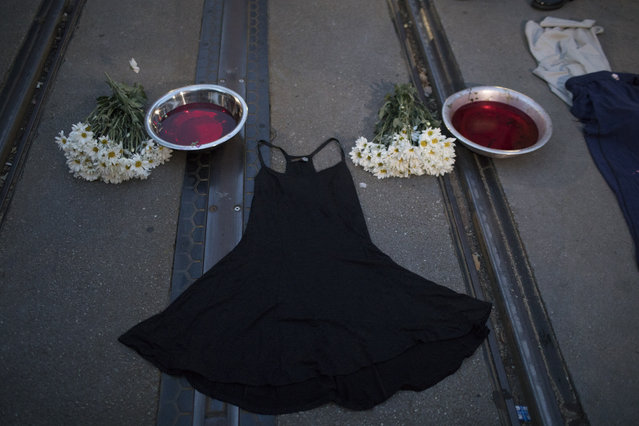 A dress is displayed on the street between flowers and bowls with a red liquid during a protest against the murder of councilwoman Marielle Franco in Rio de Janeiro, Brazil, Tuesday, March 20, 2018. (Photo by Leo Correa/AP Photo) 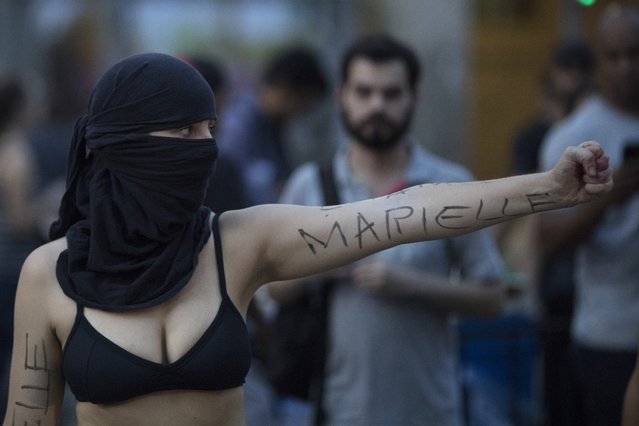 A demonstrator shows her arm with the name “Marielle” written on it, as she performs during a protest against the murder of councilwoman Marielle Franco in Rio de Janeiro, Brazil, Tuesday, March 20, 2018. (Photo by Leo Correa/AP Photo) 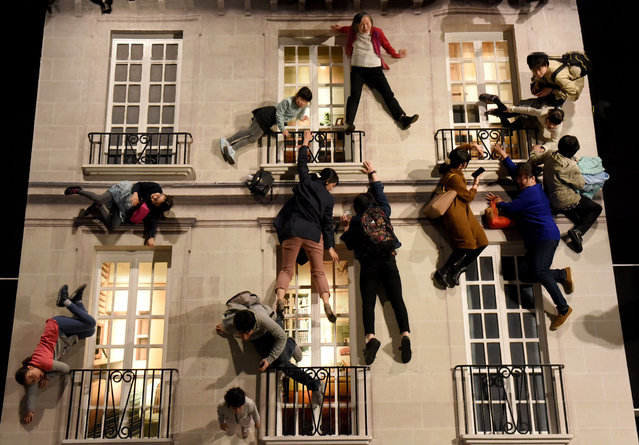