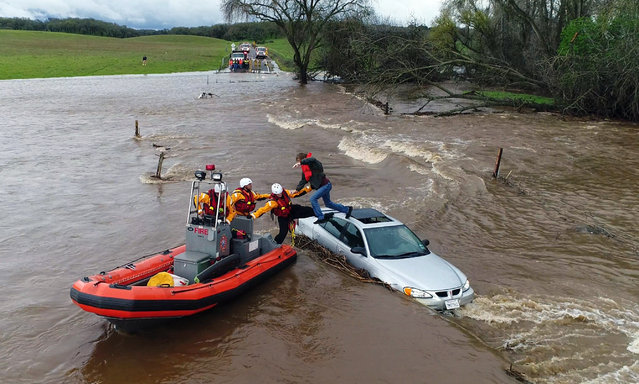 The Fire Department rescues a motorist who became stranded as a flash flood washed over a road near Folsom, USA on March 22, 2018. Powerful storms spread more rain across California on Thursday, swelling rivers. (Photo by Kelly B. Huston/AP Photo/California Governor's Office of Emergency Services) 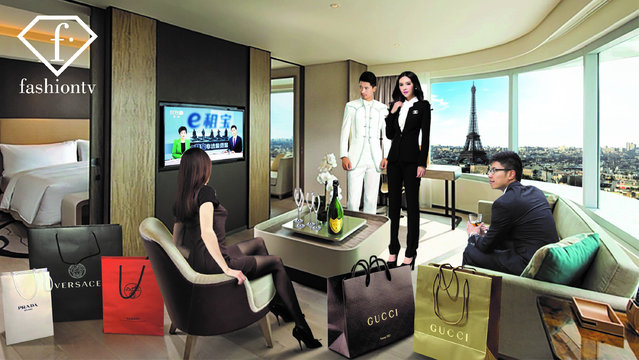 In this image released on Friday, March 21, 2018, it is announced that Fashion TV has been appointed to distribute 25 Chinese TV channels to 230 million Chinese tourists in hotels around the world. FashionTV cooperates with APT Satellite Company Limited to distribute the Great Wall TV Platform, a TV channel bouquet including some highly-rated TV channels, namely CCTV-Entertainment, Hunan TV, Zhejiang TV, Oriental TV, to hotels around the world, using a combination of OTT and satellite distribution technology to maximize the coverage. (Photo by FashionTV via AP Images Photo) 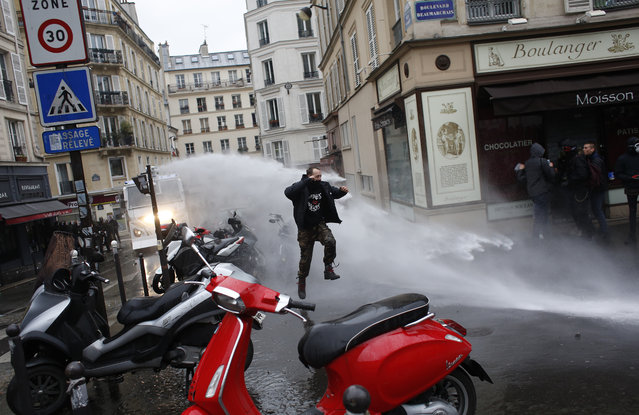 A man jumps to avoid a police water canon during a demonstration, Thursday, March 22, 2018 in Paris. Nationwide strikes are causing major disruptions to trains, planes, schools and other public services in France Thursday as unions set up dozens of street protests across the country. Paris protest was mostly peaceful, but some localized scuffles broke out between some violent protesters wearing black hoods and riot police. (Photo by Thibault Camus/AP Photo) A Somali girl drags a jerrycan filled with water from a well at the Tawakal IDP camp on the outskirts of Mogadishu, Somalia, on March, 21, 2018. World Water Day, on March 22, 2018, calls attention on the importance of water, with this year's theme “Nature for Water” – exploring nature-based solutions to the water challenges we face in the 21st century. (Photo by Mohamed Abdiwahab/AFP Photo) 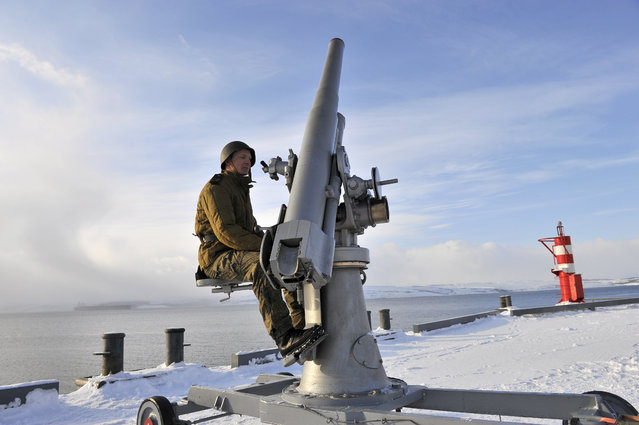 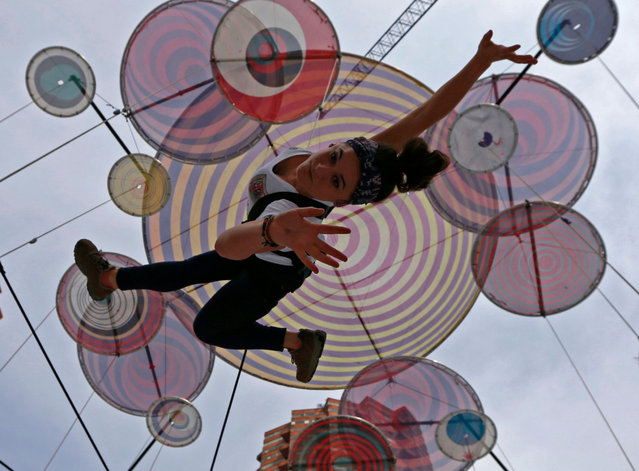 Artists of the Spanish theatre company Voala Project perform the “Muare Experience” show, in the framework of the XVI Ibero American Theater Festival in Bogota on March 22, 2018. The biennial festival' s first edition took place in 1988 and is considered the largest theatre festival in the world. (Photo by John Vizcaino/AFP Photo) 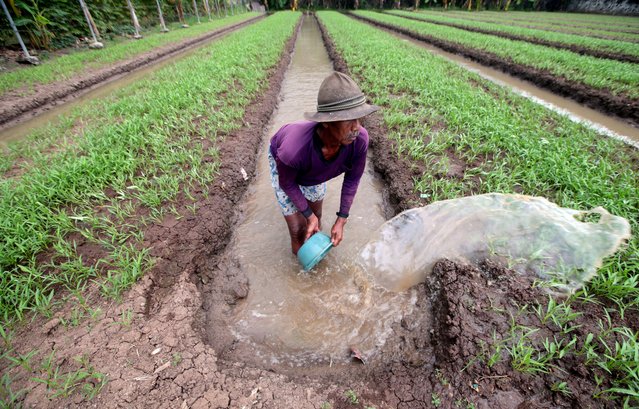 An Indonesian farmer sprays water to his kale plants in his field in Teluk Naga, Tanggerang, Banten, Indonesia, 22 March 2018. World Water Day is held annually on 22 March as a means of focusing attention on the importance of freshwater and advocating for the sustainable management of freshwater resources. The theme for World Water Day 2018 is “Nature for Water”, exploring nature-based solutions to the water challenges we face in the 21st century. (Photo by Bagus Indahono/EPA/EFE/Rex Features/Shutterstock) Turkish President Recep Tayyip Erdogan playing football with Huseyin Dinc during his meeting with athletes with Down Syndrome and Turkey national futsal team at the Presidential Complex in Ankara, Turkey on March 22, 2018. (Photo by Murat Cetinmuhurdar/Presidency of Turkey/Anadolu Agency/Getty Images) 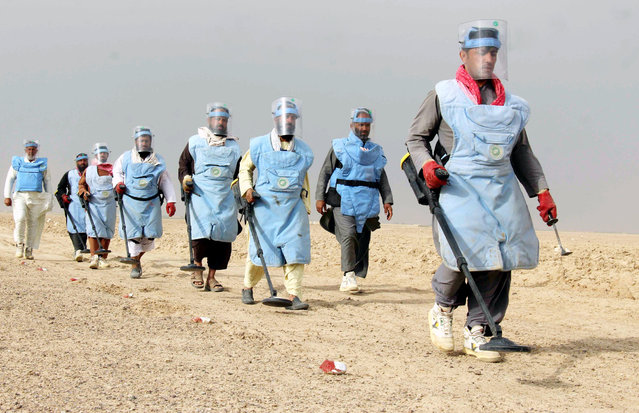 Afghan workers preapre to search for landmines in Kandahar, Afghanistan, 19 March 2018. Several workers belonging to different Government and Non-Government organizations have been cleaning the volatile southern part of the country from landmines that have been planted during the Soviet War. (Photo by Muhammad Sadiq/AFP Photo) 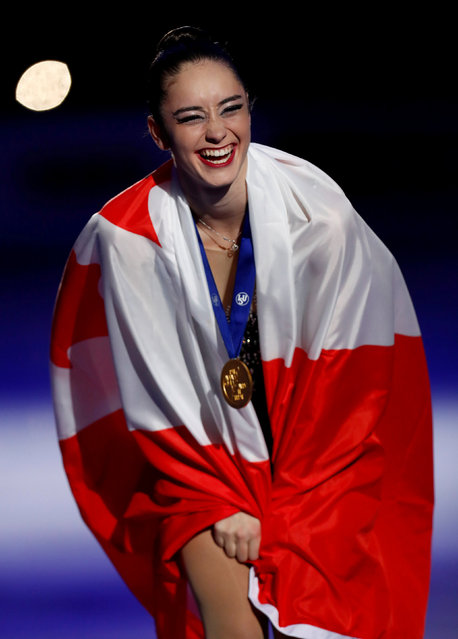 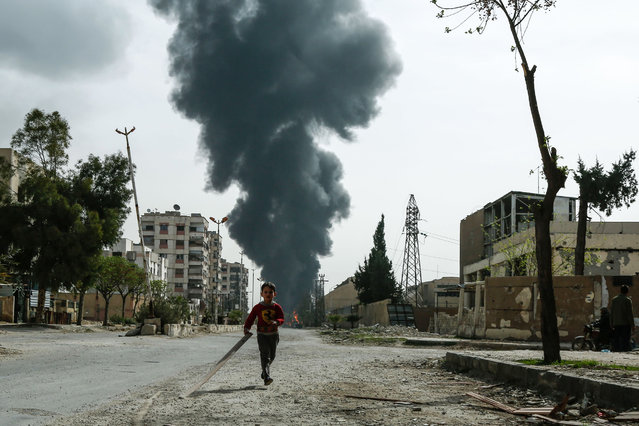 A child runs along a street in front of clouds of smoke billowing following a reported air strike on Douma, the main town of Syria's rebel enclave of Eastern Ghouta on March 20, 2018. (Photo by Muhammad Sadiq/AFP Photo) 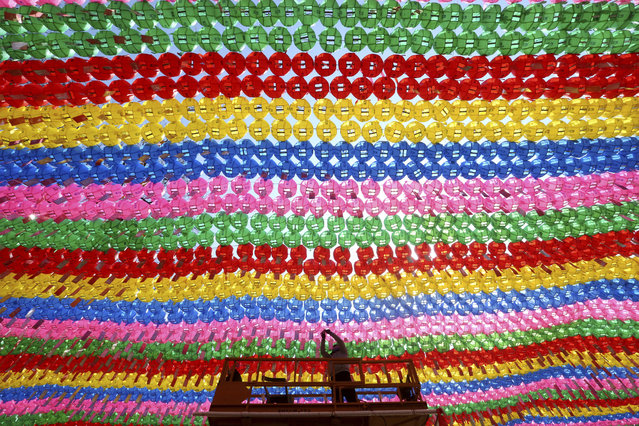 A worker attaches the name tag of a Buddhist who made donation to a lantern for the upcoming celebration of Buddha's birthday on May 22 at the Jogye temple in Seoul, South Korea, Thursday, March 22, 2018. Similar lanterns will be displayed in all Buddhist temples around South Korea for the public viewing. (Photo by Ahn Young-joon/AP Photo) 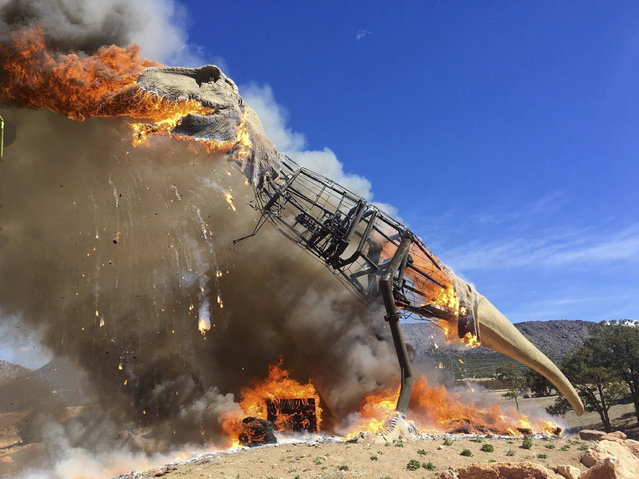 A life-sized animatronic T-Rex at the Royal Gorge Dinosaur Experience in Canon City, Colorado, USA goes up in flames after an electrical issue on March 21, 2018. (Photo by AP Photo/Stringer) 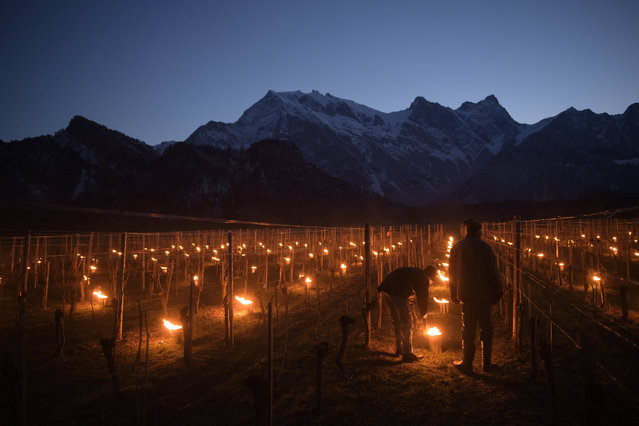 So-called frost candles are lit in a vineyard in Flaesch, Graubuenden, Switzerland, 22 March 2018. After the frost nights of 2016 and 2017 caused damage to crops, the “Plantahof” local agricultural school is conducting trials to determine the value of measures like frost-candles. (Photo by Gian Ehrenzeller/EPA/EFE) 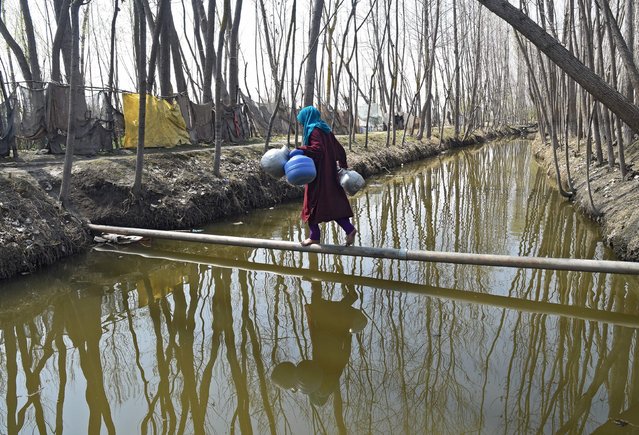 A Kashmiri Muslim woman balances on a water pipe before collecting water at Dasilpora village on March 22, 2018. World Water Day is held annually on 22 March as a means of focusing attention on the importance of freshwater and advocating for the sustainable management of freshwater resources. (Photo by Tauseef Mustafa/AFP Photo)
Edit Del
24 Mar 2018 06:20:00, post received 0 comments
Publication archive:
←   →
Popular tags:
All tags
Last searches: