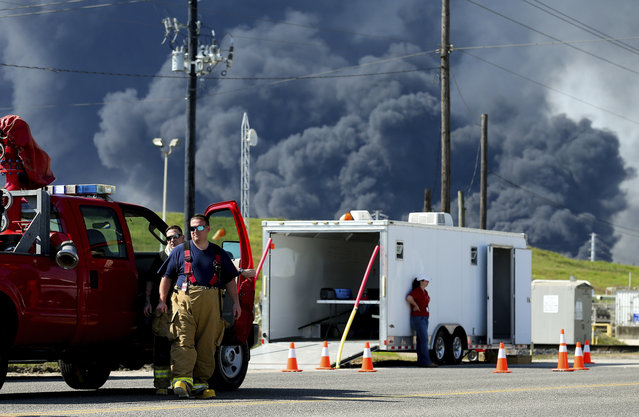 Firefighters arrive at the site where the Intercontinental Terminals Company petrochemical fire reignited, Friday, March 22, 2019, in Deer Park, Texas. The efforts to clean up a Texas industrial plant that burned for several days this week were hamstrung Friday by a briefly reignited fire and a breach that led to chemicals spilling into the nearby Houston Ship Channel. (Photo by Godofredo A. Vasquez/Houston Chronicle via AP Photo) 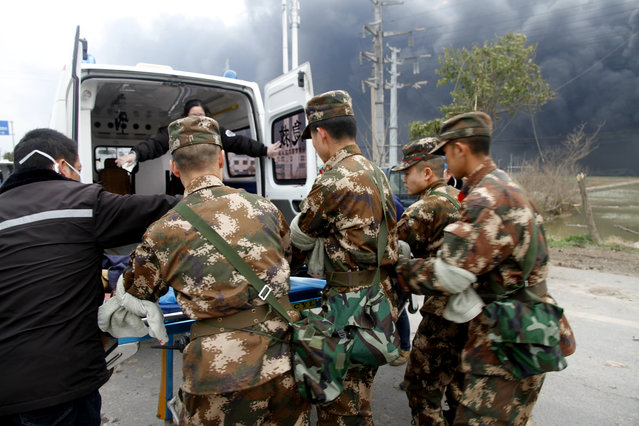 In this Thursday, March 21, 2019, photo, rescuers transport an injured person near the site of a factory explosion in a chemical industrial park in Xiangshui County of Yancheng in eastern China's Jiangsu province. The local government reports the death toll in an explosion at a chemical plant in eastern China has risen with dozens killed and more seriously injured. (Photo by Chinatopix via AP Photo) 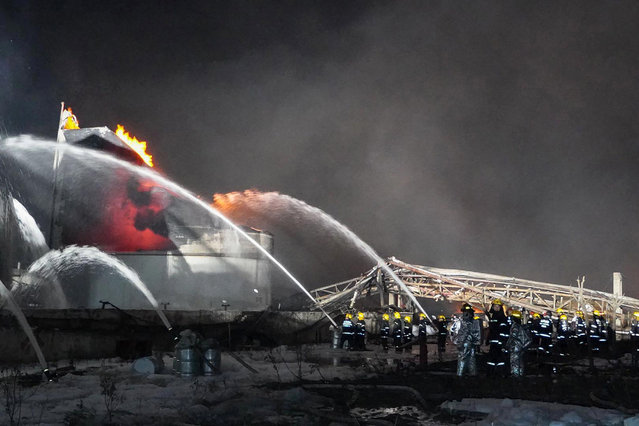 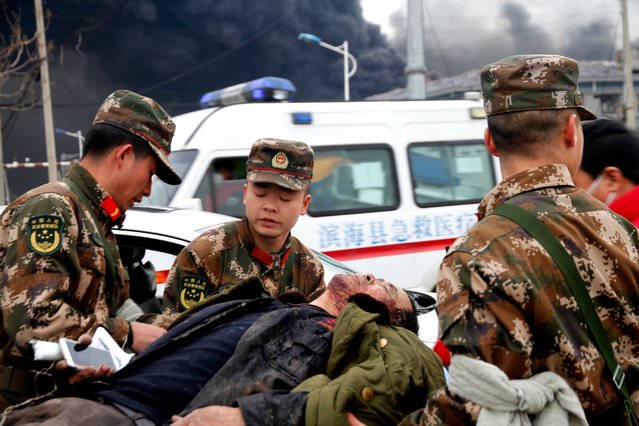 Scene of an industrial park after an chemical plant explosion in the city of Yancheng, Jiangsu province, China on March 21, 2019. Six people are dead and 30 others seriously injured after an explosion ripped through an industrial park in the city of Yancheng, eastern China's Jiangsu Province Thursday afternoon, local authorities said. Thirty-one people have been rescued as of 5 p.m., the Ministry of Emergency Management said. (Photo by Imaginechina/Rex Features/Shutterstock) 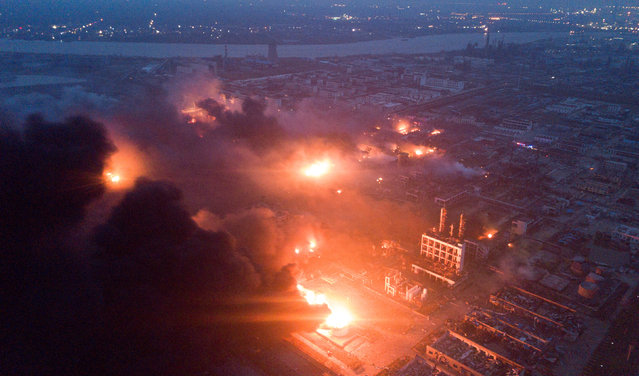 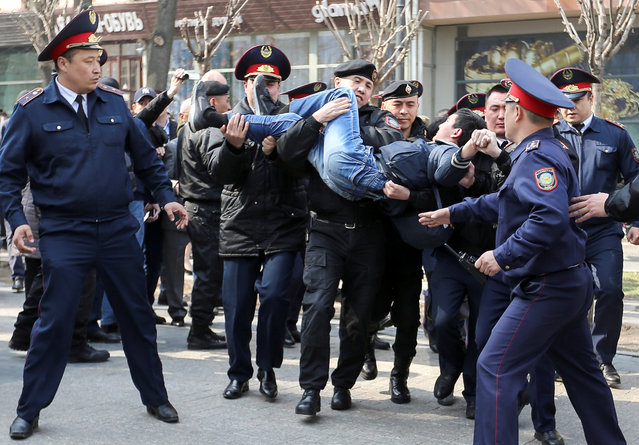 Police officers detain an anti-government protester during a rally in Almaty, Kazakhstan March 22, 2019. The parliament in this Central Asian nation voted earlier this week to change the name of the capital Astana to Nursultan after the outgoing long-time president. The new president will have to sign the decree to make the change official. (Photo by Pavel Mikheyev/Reuters) 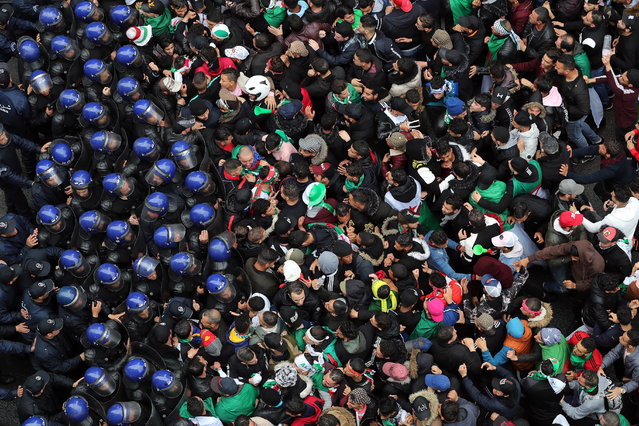 Algerian policemen block the way in front of people protesting against extending President Abdelaziz Bouteflika mandate in Algiers, Algeria, 22 March 2019. Protests continue in Algeria despite Algeria's president announcement on 11 March that he will not run for a fifth Presidential term and postponement of presidential elections previously scheduled for 18 April 2019. Protesters are calling on Bouteflika to step down after his term expires on April 28. (Photo by Mohamed Messara/EPA/EFE) 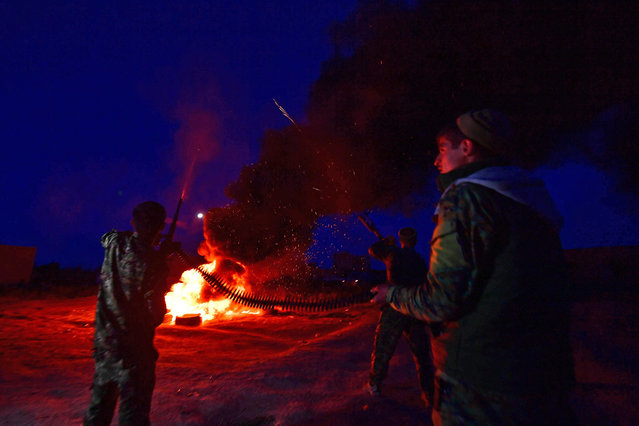 A fighter with the Kurdish-led Syrian Democratic Forces (SDF) fire shots in the air as they stand around a bonfireduring Nowruz (Noruz) celebrations near the village of Baghouz in the countryside of the eastern Syrian province of Deir Ezzor on March 20, 2019, as battles continue to capture the Islamic State (IS) groups last scrap of territory. The Persian New Year is an ancient Zoroastrian tradition celebrated by Iranians and Kurds which coincides with the vernal (spring) equinox and is calculated by the solar calendar. (Photo by Giuseppe Cacace/AFP Photo) 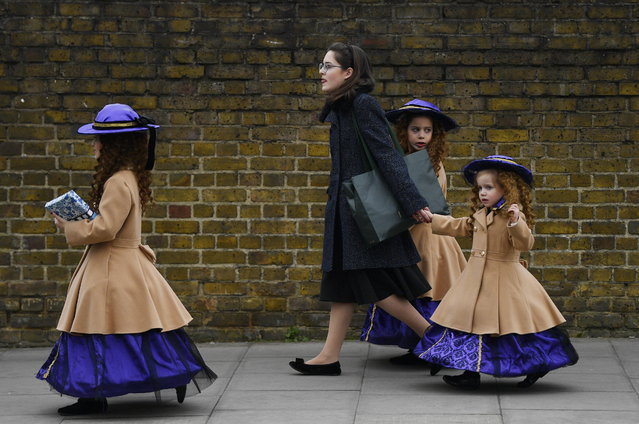 Members of the Jewish Community celebrate the festival of Purim in Stamford Hill north London, Britain, 21 March 2019. Purim is a Jewish holiday that commemorates the saving of the Jewish people from Haman according to the Biblical Book of Esther. Families often dress in colourful costume and share gifts. Stamford Hill in north London has the largest concentration of ultra-orthodox Charedi Hasidic Jews in Europe. (Photo by Neil Hall/EPA/EFE) 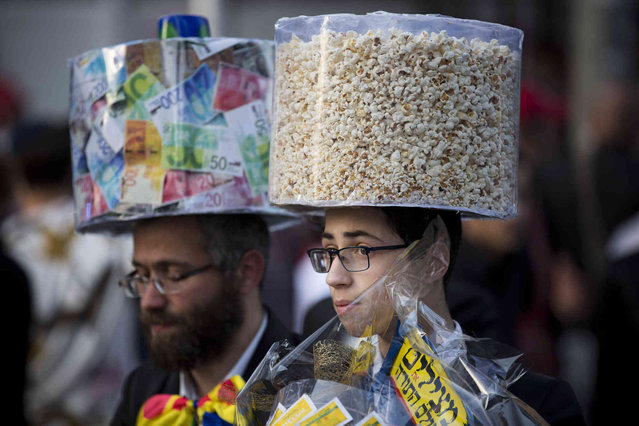 Ultra-Orthodox Jews wear costumes during the Jewish festival of Purim, in Bnei Brak, Israel, Thursday, March 21, 2019. The Jewish holiday of Purim commemorates the Jews' salvation from genocide in ancient Persia, as recounted in the Book of Esther. (Photo by Oded Balilty)/AP Photo 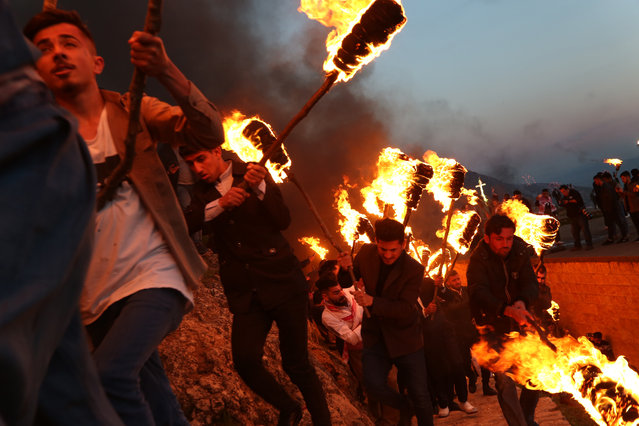 People participate in a torch procession during celebrations of the Kurdish New Year Nowruz (Also known as Newroz) in Akre, Aqrah City in Duhok, Kurdistan Region, northern Iraq, 20 March 2019. The Persian New Year Nowruz which has been celebrated for at least 3,000 years is the most revered celebration in the greater Persian world, which includes the countries of Iran, Afghanistan, Azerbaijan, Turkey, and portions of western China and northern Iraq. (Photo by Gailan Haji/EPA/EFE) 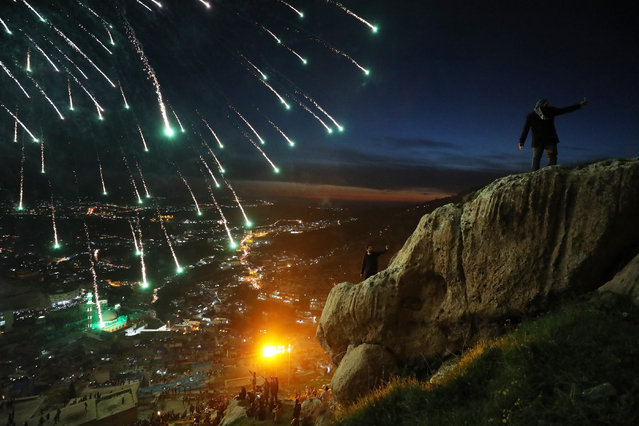 Kurdish families celebrate Nowruz, Kurdish New Year in the mountainous area around on Akre on March 20, 2019 in Iraq. Nowruz marks the Persian New Year, as well as the vernal equinox and is celebrated by diverse communities across western and central Asia.(Photo by Micah Garen/Getty Images) 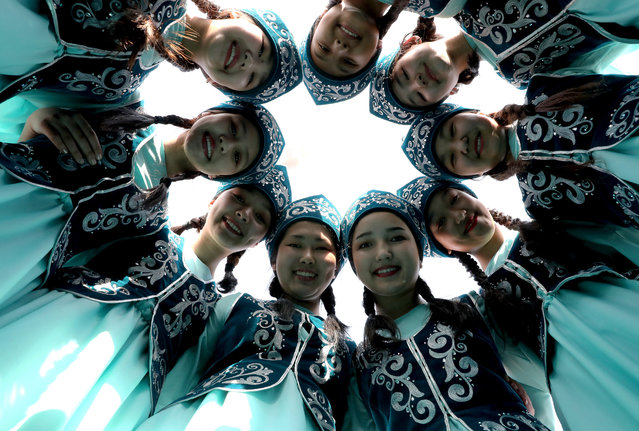 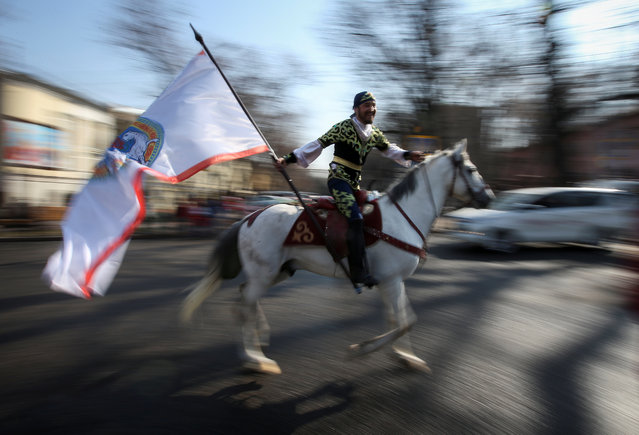 A reveller rides a horse as he holds a city flag during a parade as part of Navruz celebrations, an ancient holiday marking the spring equinox, in Almaty, Kazakhstan March 21, 2019. (Photo by Pavel Mikheyev/Reuters) 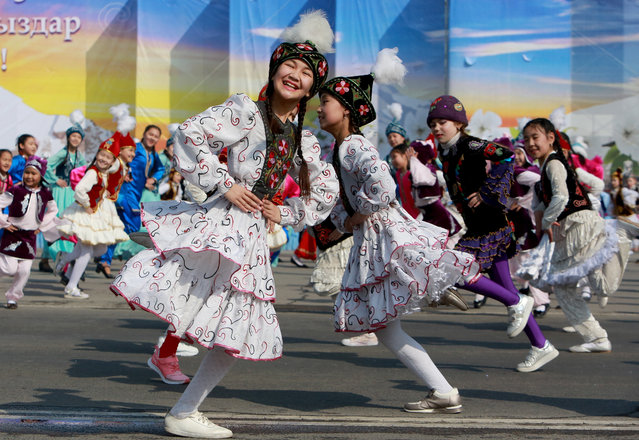 A Kyrgyz girls dressed in a national costume dance during the celebration of Nooruz in Bishkek, Kyrgyzstan, 21 March 2019. Nooruz is traditionally celebrated by Central Asian people as a New Year holiday. (Photo by Igor Kovalenko/EPA/EFE) 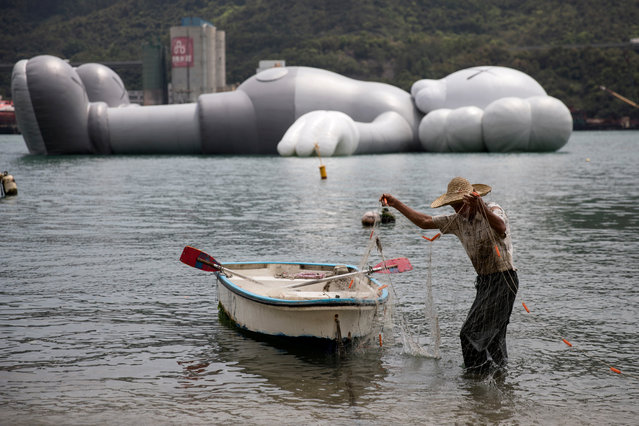 A fisherman sorts his net next to the 37-meter-long “KAWS:HOLIDAY Companion” inflatable sculpture in Tsing Yi, Hong Kong, China, 21 March 2019. KAWS:HOLIDAY, made by US artist and designer Brian Donnelly known professionally as Kaws, will be displayed in Hong Kong's Victoria Harbour from 22 to 31 March 2019. (Photo by Jerome Favre/EPA/EFE) 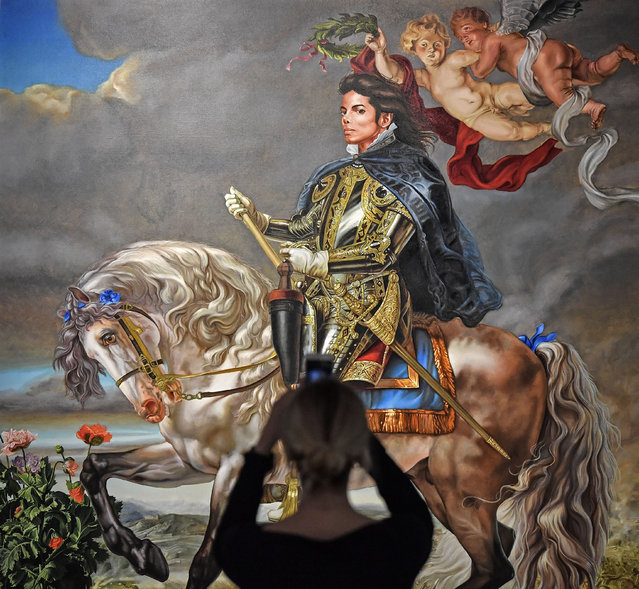 A visitor takes a smartphone picture of the painting “Equestrian portrait of King Philipp II (Michael Jackson)” from US artist Kehinde Wiley at a preview of the exhibition “Michael Jackson: On The Wall” at the Bundeskunsthalle museum in Bonn, Germany, Thursday, March 21, 2019. This work is the final commissioned portrait of Michael Jackson. The exhibition around the controversial iconic pop idol is open until July 14. (Photo by Martin Meissner/AP Photo) 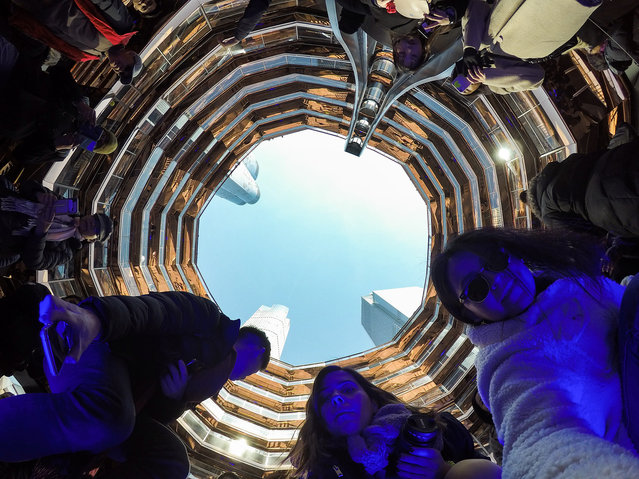 Visitors try to get the best picture with their phones and cameras at the center of “The Vessel” a public art structure on the West Side of Midtown Manhattan in New York, United States on March 20, 2019. The elaborate honeycomb-like structure Vessel designed by the British designer Thomas Heatherwick, its consisting of 154 flights of stairs at Hudson Yards 2,500 steps, and 80 landings that visitors would be able to climb. Phase one of the Hudson Yards real-estate development project, which cost about 25 billion US dollars, opened on Friday. (Photo by Atilgan Ozdil/Anadolu Agency/Getty Images) 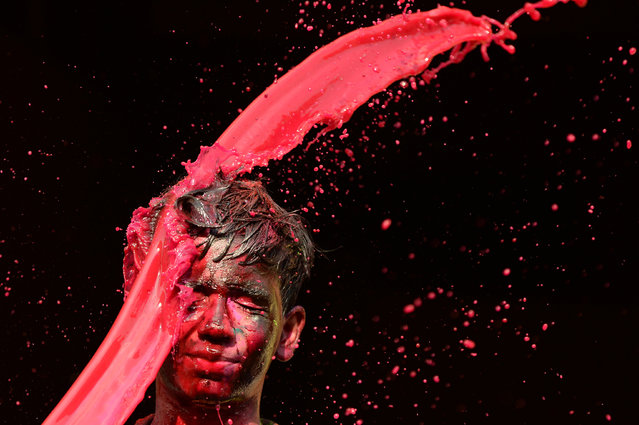 An Indian raveller gestures as he is thrown coloured water by another during Holi festival celebrations in Chennai on March 21, 2019. Holi, the popular Hindu spring festival of colours is observed in India and across countries at the end of the winter season on the last full moon of the lunar month. (Photo by Arun Sankar/AFP Photo) 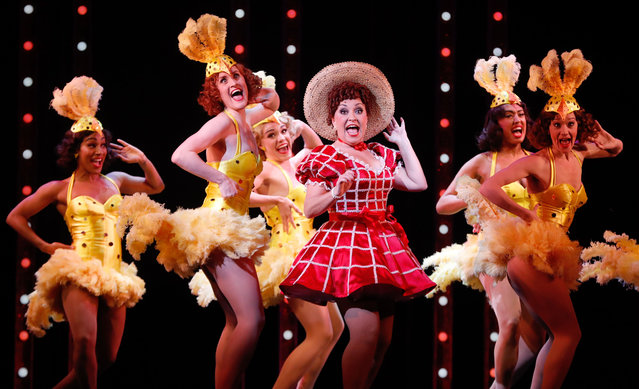 Artists perform during the “Guys and Dolls” musical show at the Theatre Marigny in Paris on March 21, 2019. (Photo by Francois Guillot/AFP Photo) 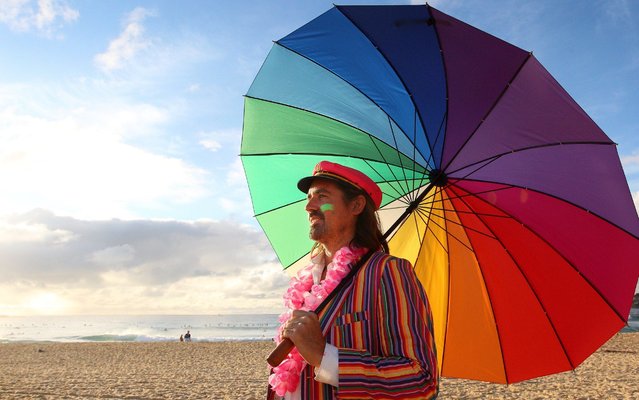 OneWave founder Grant Trebilco attends celebrations at sunrise on Bondi Beach on March 22, 2019 in Sydney, Australia. Surfers gather to celebrate five years of OneWave, a not for profit that encourages people to talk about mental health weekly at global ‘Fluro Friday’s’ events for surfers of all levels at beaches around the globe. OneWave in conjunction with Away and MF soft boards used the event to announce a partnership to provide free surf board hire on Fridays to surfers of all levels that need some “headspace” and may not be able to afford a board. (Photo by Lisa Maree Williams/Getty Images) 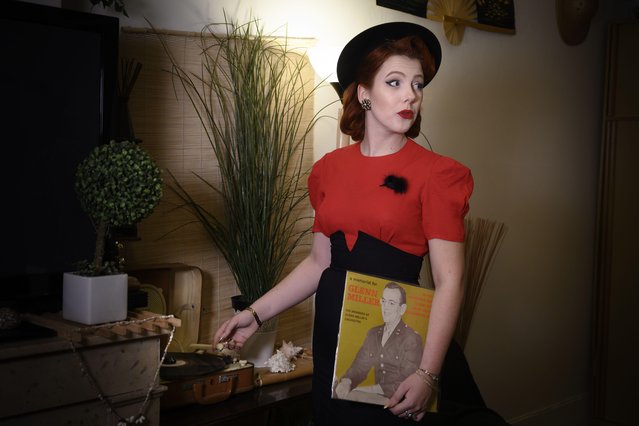 Marion Berrou-Drand alias Dollykitten, 29, poses in her appartment in Lyon, on March 5, 2019. Dollykitten is the first French finalist of the “Viva Las Vegas Pin-up Contest”, the largest international pine-up competition which will be held on April. (Photo by Jean-Philippe Ksiazek/AFP Photo) 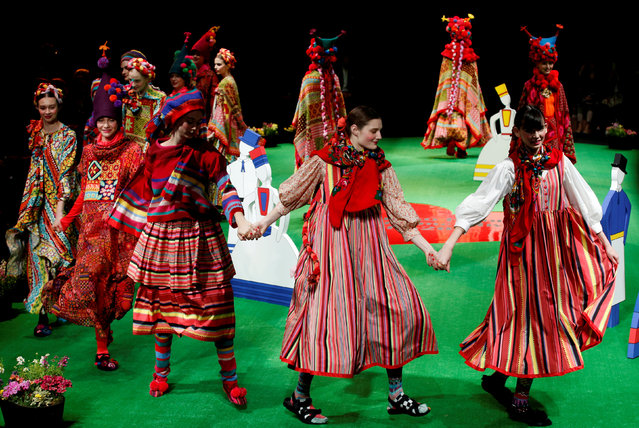