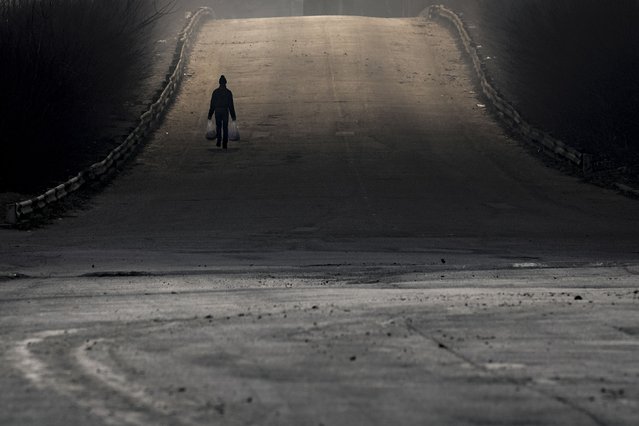 A man carries shopping bags as heavy smoke from a warehouse destroyed by Russian bombardment casts shadows on the road outside Kyiv, Ukraine, Thursday, March 24, 2022. Ukraine President Volodymr Zelenskyy called on people worldwide to gather in public Thursday to show support for his embattled country as he prepared to address U.S. President Joe Biden and other NATO leaders gathered in Brussels on the one-month anniversary of the Russian invasion. (Photo by Vadim Ghirda/AP Photo) 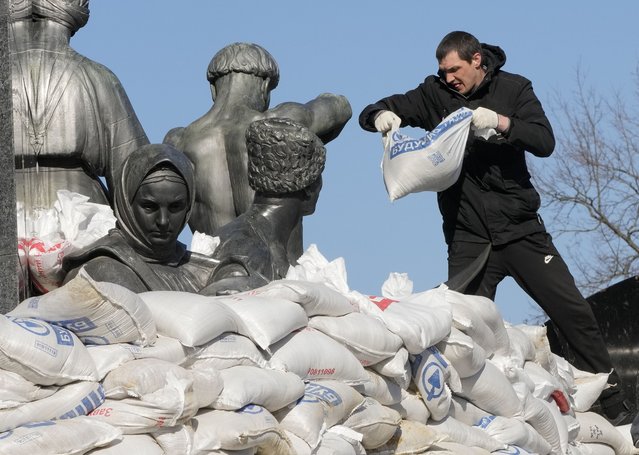 A city resident covers the monument to Taras Shevchenko, a famous Ukrainian poet and a national symbol, with sandbags to protect from the Russian shelling, in Kharkiv, Ukraine, Thursday, March 24, 2022. The bronze 16 meter high monument was opened in 1935, survived WWII and is considered one of the world's best monuments to Shevchenko. (Photo by Efrem Lukatsky/AP Photo) 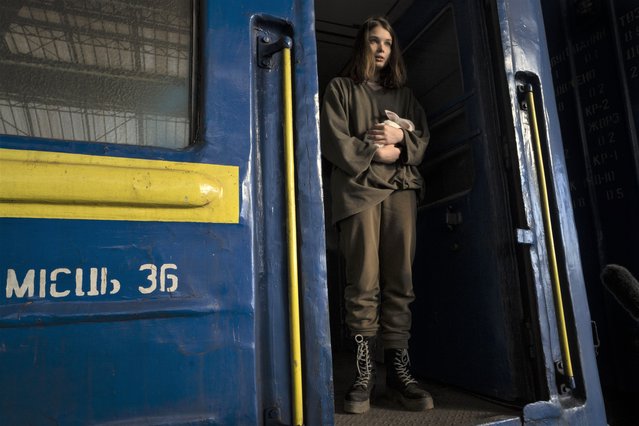 Julia, 16, from Dnipro, who is traveling alone, holds her pet rabbit Baby after arriving to the Lviv main station, western Ukraine, Thursday, March 24, 2022. She was on her way to join her mother and then go on to Poland or Germany. (Photo by Nariman El-Mofty/AP Photo) 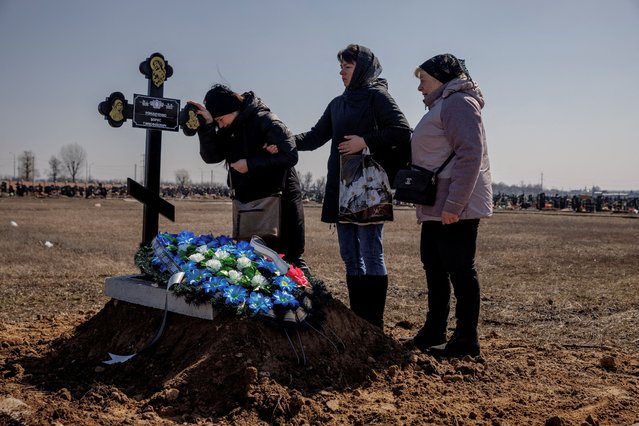 Family members of Borys Romanchenko attend the funeral of the Holocaust survivor in Kharkiv as Russia's attack on Ukraine continues, Ukraine, March 24, 2022. Romanchenko was a 96-year-old Holocaust survivor, who was killed at his apartment during a shelling. (Photo by Thomas Peter/Reuters) 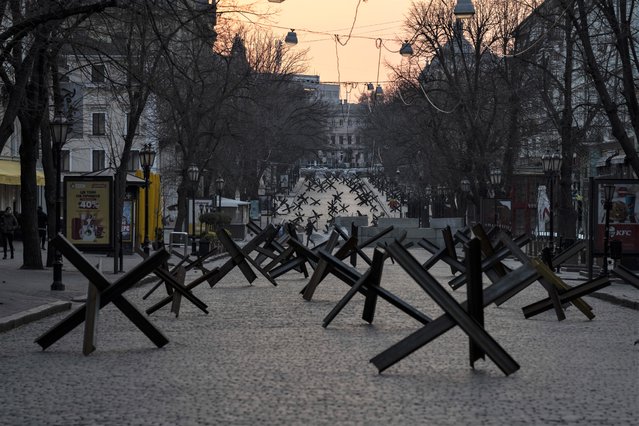 Anti- tank barricades are placed on a street as preparation for a possible Russian offensive, in Odesa, Ukraine, Thursday March 24, 2022. (Photo by Petros Giannakouris/AP Photo) 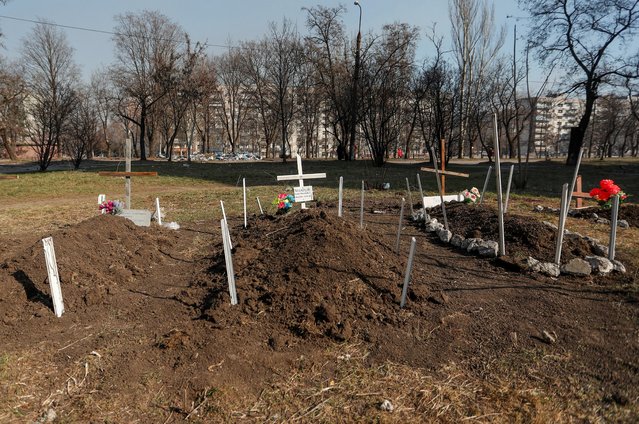 Graves of residents killed by shelling during Ukraine-Russia conflict are seen in a yard, in the besieged southern port of Mariupol, Ukraine March 23, 2022. (Photo by Alexander Ermochenko/Reuters) 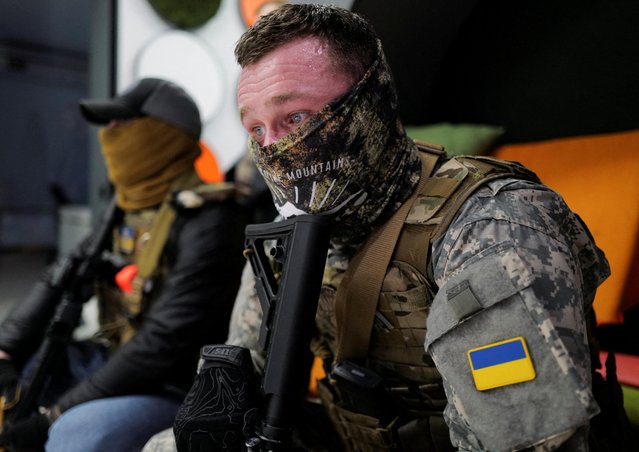 Ihor, 28, who used to be a sales manager, takes part in a training with weapons at a private company room following the Russia's invasion of Ukraine, in Lviv, Ukraine, March 23, 2022. (Photo by Zohra Bensemra/Reuters) 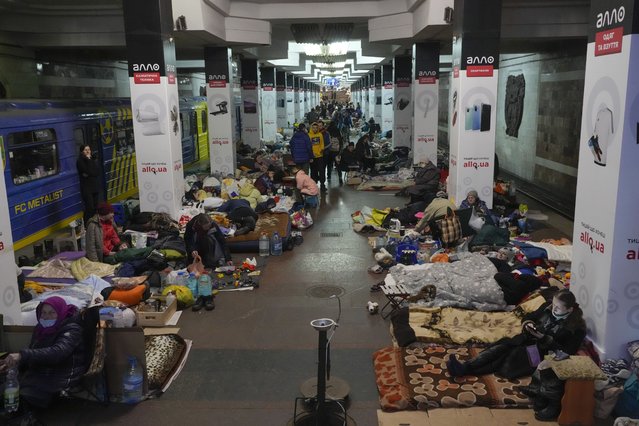 People with their belongings in a city subway that they have used as a bomb shelter in Kharkiv, Ukraine, Thursday, March 24, 2022. World leaders heard impassioned pleas Thursday from Ukrainian President Volodymyr Zelenskyy for more military aid to defend his country and the United States announced new sanctions and humanitarian aid as officials gathered for a trio of summits to discuss next steps in countering Russia's month-old invasion of its much smaller neighbor. (Photo by Efrem Lukatsky/AP Photo) 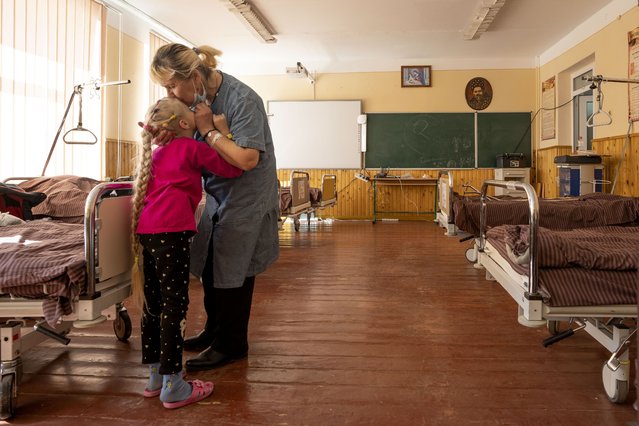 Nadia kisses her 10-year-old granddaughter Zlata Moiseinko, suffering from a chronic heart condition, as she receives treatment at a schoolhouse that has been converted into a field hospital in Mostyska, western Ukraine, Thursday, March 24, 2022. The United Nations children’s agency says Russia’s invasion has displaced half of Ukraine’s children, one of the largest such displacements since World War II. (Photo by Nariman El-Mofty/AP Photo) 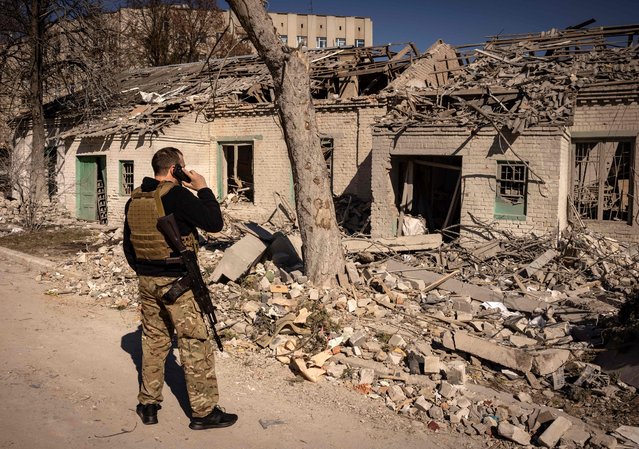 A member of the Ukrainian Territorial Defence Forces stands in front of a damaged house in the city of Zhytomyr, northern Ukraine, on March 23, 2022. (Photo by Fadel Senna/AFP Photo) 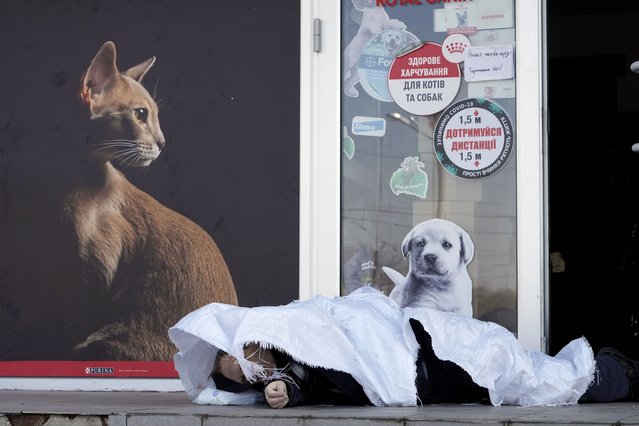 The lifeless body of a resident lies next to a shop after being killed by a Russian attack in Kharkiv, Ukraine, Thursday, March 24, 2022. Kharkiv is Ukraine's second biggest city 30 kilometers of the Russian border. (Photo by Efrem Lukatsky/AP Photo) 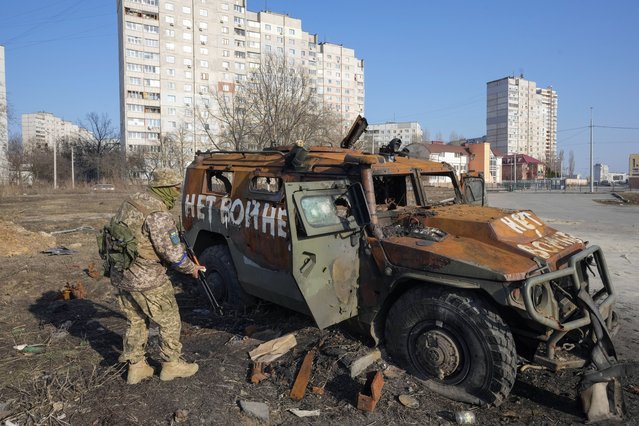 A Ukrainian soldier inspects a destroyed Russian APC after recent battle in Kharkiv, Ukraine, March 24, 2022. The writing made by Ukrainian soldiers reads: “Not to War”. (Photo by Efrem Lukatsky/AP Photo) 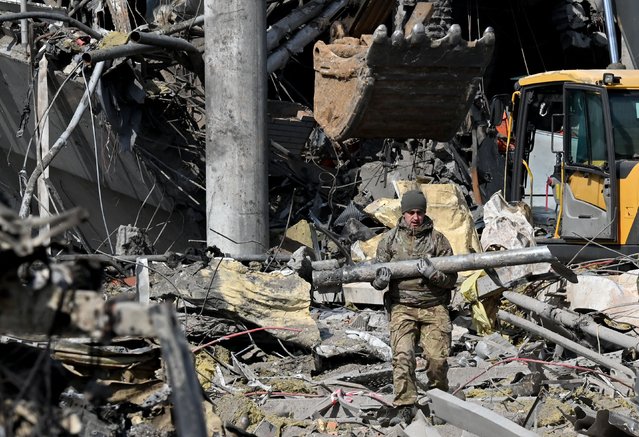 A Ukrainian serviceman carries a fragment of a rocket outside a building in Kyiv on March 24, 2022, after it was destroyed by Russian shelling. A month since Russia launched its shock invasion, Ukraine's leader has pleaded for NATO to “save” his shattered country with unrestricted military aid, so its armed forces could transform their dogged defence into attack. While Kyiv and Western intelligence report battlefield gains against the Russians, the vast scale of civilian suffering was made stark as the UN said more than half of all Ukraine's children have been driven from their homes. (Photo by Sergei Supinsky/AFP Photo) 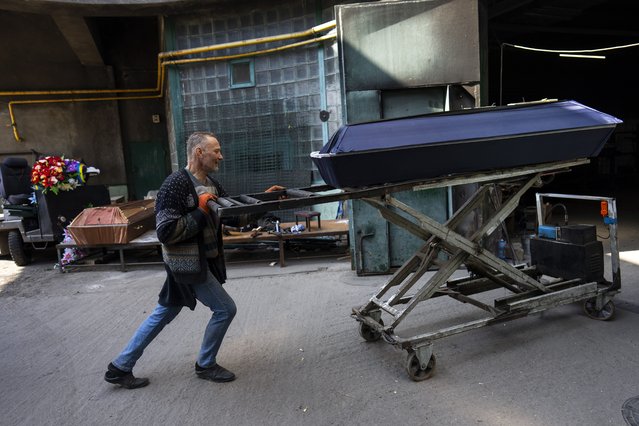 A cemetery worker takes a coffin to be cremated in Baikove cemetery, Kyiv, Ukraine, Thursday, March 24, 2022. Dozens of ashes of cremated people are kept in a deposit of the cemetery, since due to the war against Russia their relatives did not go to pick them up. (Photo by Rodrigo Abd/AP Photo) 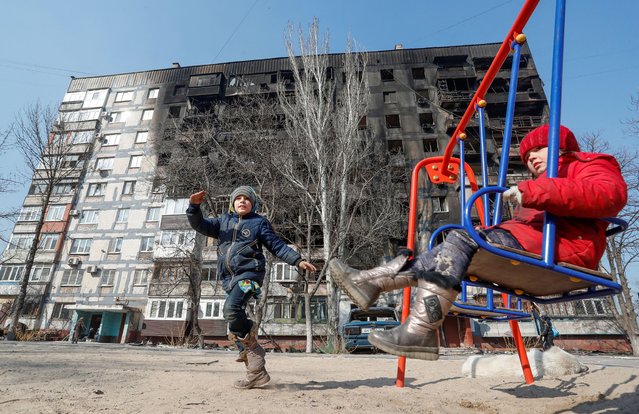 Children play in front of a building damaged in fighting during Ukraine-Russia conflict, in the besieged southern port of Mariupol, Ukraine on March 23, 2022. (Photo by Alexander Ermochenko/Reuters) 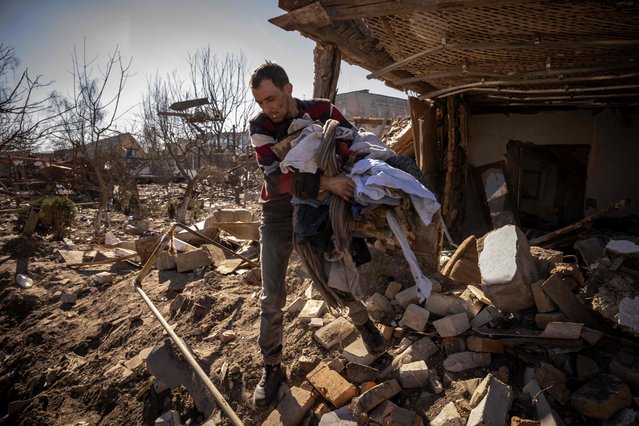 A man collects clothes from a damaged house in the city of Zhytomyr, northern Ukraine, on March 23, 2022. (Photo by Fadel Senna/AFP Photo) 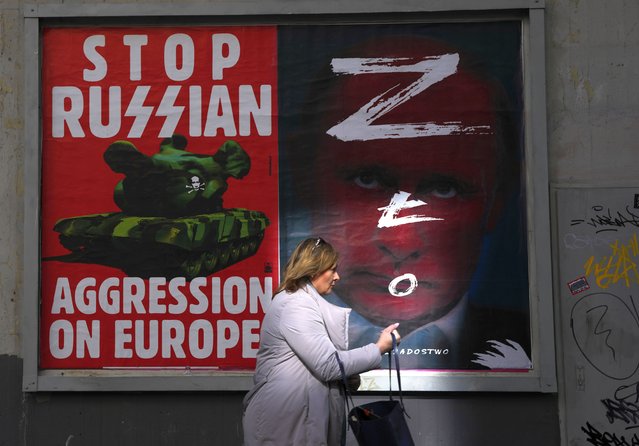 A woman walks past a wall with posters depicting Russian President Vladimir Putin, right, in Warsaw, Poland, on Thursday, March 24, 2022. Ukraine President Volodymr Zelenskyy called on people worldwide to gather in public Thursday to show support for his embattled country as he prepared to address U.S. President Joe Biden and other NATO leaders gathered in Brussels on the one-month anniversary of the Russian invasion. (Photo by Petr David Josek/AP Photo) 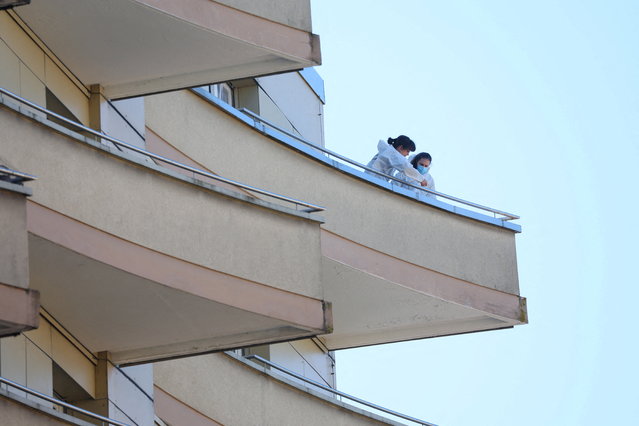 Police officers take samples on a balcony after five people appeared to have jumped from their apartment, in Montreux, Switzerland, March 24, 2022. (Photo by Denis Balibouse/Reuters) 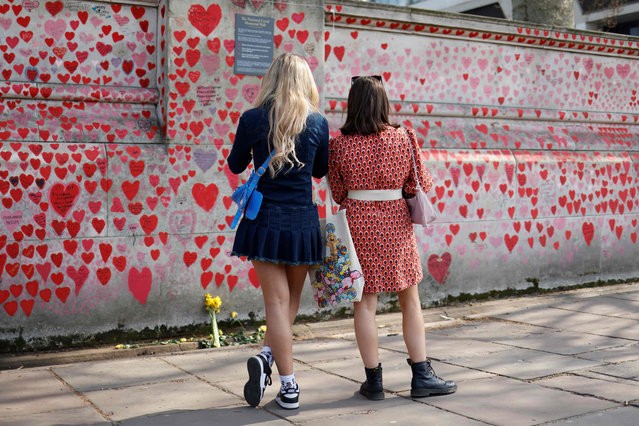 Pedestrians stop to look at the National Covid Memorial Wall in London on March 23, 2022 as Britain held a minute's silence to remember the victims of the coronavirus pandemic, on the second anniversary of the country's first lockdown. (Photo by Tolga Akmen/AFP Photo) 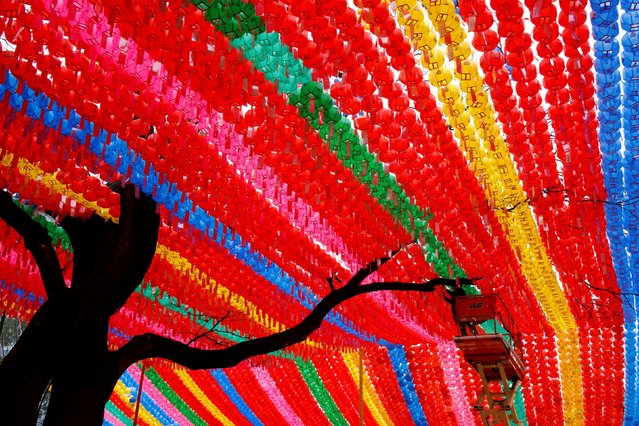 A worker wearing a face mask to prevent contracting the coronavirus disease (COVID-19) attaches prayer petitions with names written on cards to lotus lanterns in preparation of the upcoming birthday of Buddha at a temple in Seoul, South Korea on March 24, 2022. (Photo by Heo Ran/Reuters) 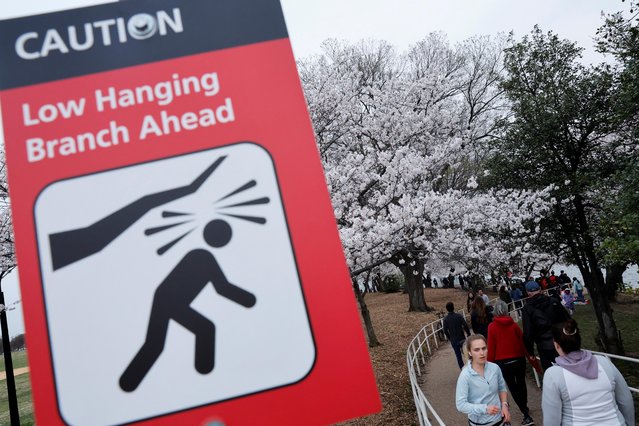