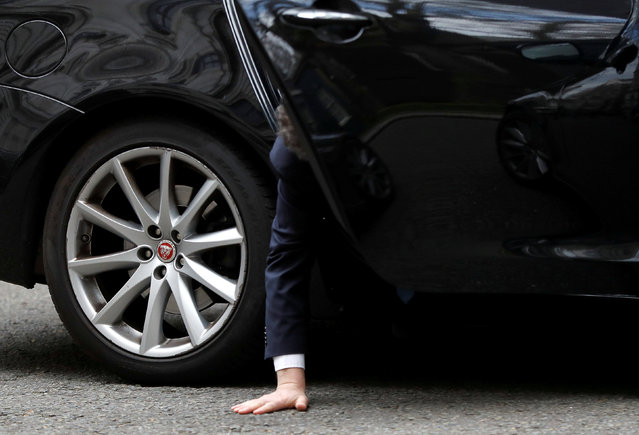 Britain's Conservative Party Chief Whip Julian Smith reaches for his dropped phone as he sits inside his car outside Downing Street in London, Britain, March 26, 2019. (Photo by Peter Nicholls/Reuters) 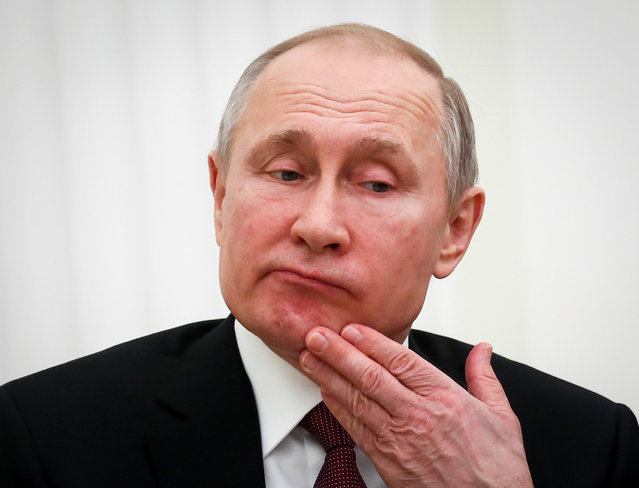 Russian President Vladimir Putin looks on at his meeting with Lebanese counterpart Michel Aoun at the Kremlin in Moscow, Russia March 26, 2019. (Photo by Maxim Shemetov/Pool via Reuters) 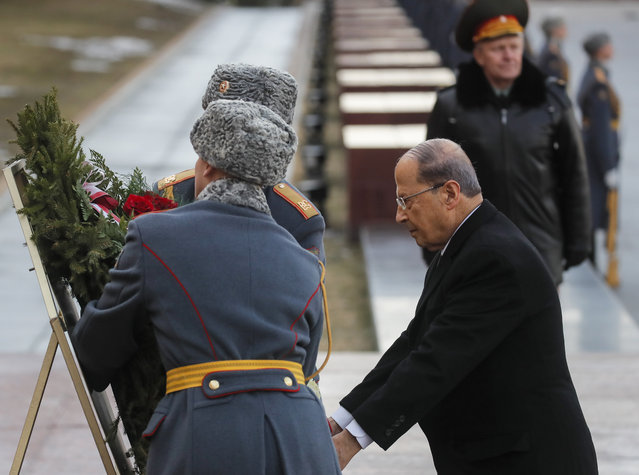 Lebanese President Michel Aoun attends a wreath laying ceremony at the Tomb of the Unknown Soldier by the Kremlin wall in Moscow, Russia, Tuesday, March 26, 2019. (Photo by Maxim Shemetov/Pool Photo via AP Photo) 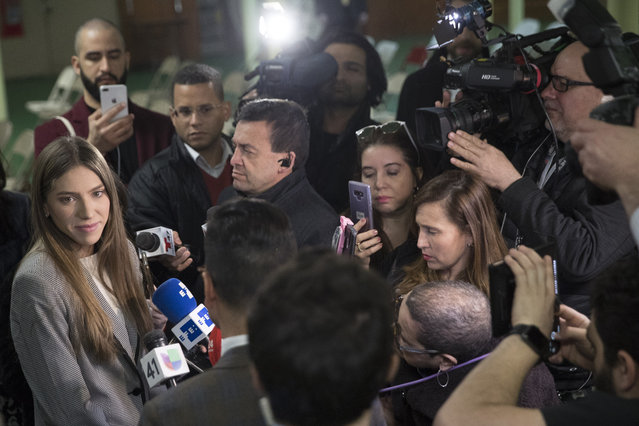 Fabiana Rosales, left, wife of Venezuelan opposition leader Juan Guaido, speaks to reporters before attending Mass at St. Teresa's Church on the Lower East Side of Manhattan, Tuesday, March 26, 2019, in New York. Rosales is emerging as a prominent figure in Guaido's campaign to bring change in the crisis-wracked country. (Photo by Mary Altaffer/AP Photo) 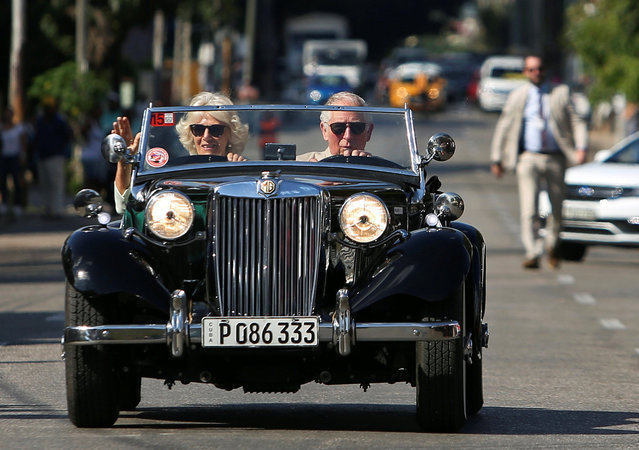 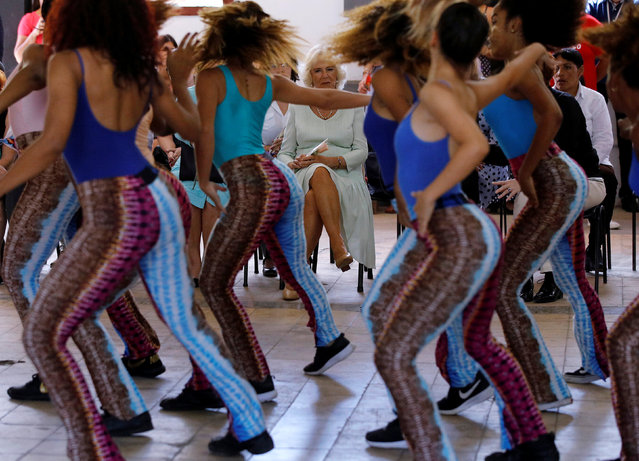 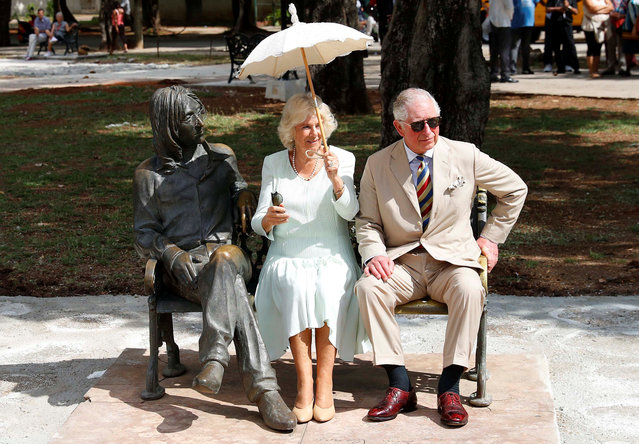 Britain's Prince Charles and Camilla, Duchess of Cornwall sit on a bench at John Lennon Park in Havana, Cuba on March 26, 2019. (Photo by Phil Noble/Reuters) 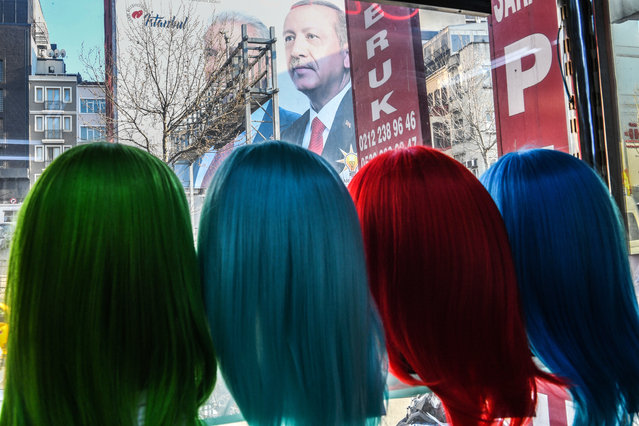 A giant election poster of the Turkish President covering the facade of a building is seen from a shop's window where wig models are displayed, in Istanbul on March 25, 2019, ahead of the March 31 local elections. (Photo by Ozan Kose/AFP Photo) 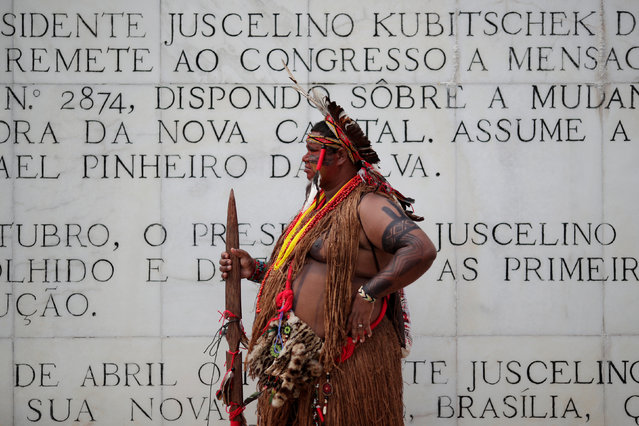 An Indigenous man from the Pataxo tribe is seen during a protest against the proposal by Brazil's President to transfer the responsibility of health care services from the federal level to municipal governments, in Brasilia, Brazil March 26, 2019. (Photo by Ueslei Marcelino/Reuters) 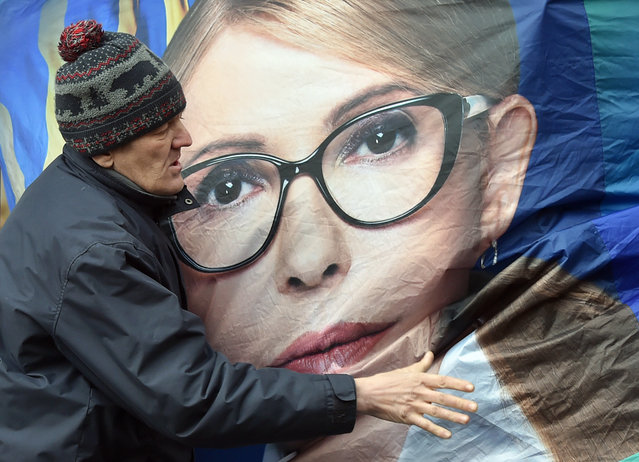 A supporter tries to stabilise a campaign booth of former Ukrainian Prime Minister and presidential candidate Yulia Tymoshenko during heavy wind in central Kiev, on March 26, 2019, ahead of Ukraine's presidential elections on March 31. (Photo by Sergei Supinsky/AFP Photo) 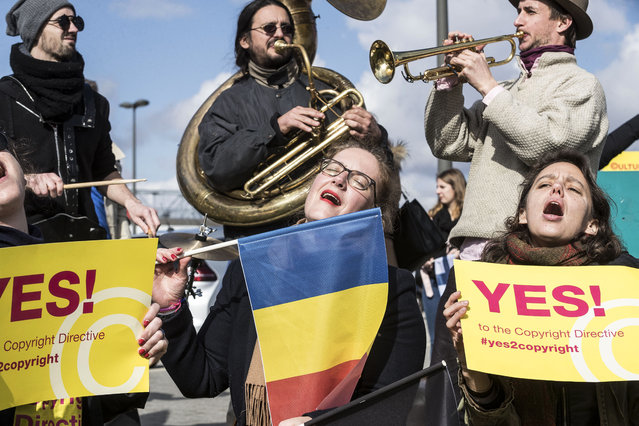 People gather at the front of the European Parliament building in Strasbourg, France, Tuesday March 26, 2019, to show their support for the copyright bill. The European Parliament is furiously debating the pros and cons of a landmark copyright bill one last time before the legislature will vote on it later. (Photo by Jean-Francois Badias/AP Photo) 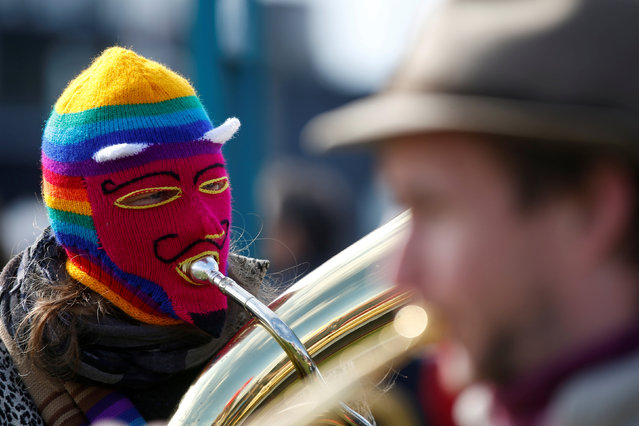 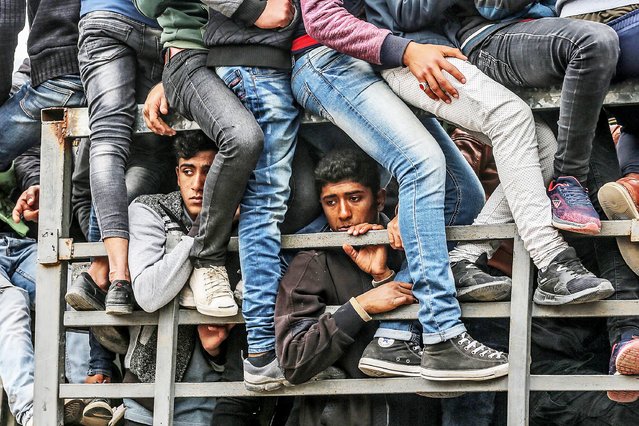 Mourners attend the funeral of 24-year-old Palestinian Habeb al-Masri, who according to Gaza's health ministry was wounded previously in clashes with Israeli forces at the Israeli-Gaza border fence, during his funeral in Beit Hanun in the northern Gaza Strip on March 24, 2019. Israeli aircraft targeted Hamas positions in the Gaza Strip early today after Palestinians there threw explosive devices at the border fence during “riots”, the army said. (Photo by Mahmud Hams/AFP Photo) 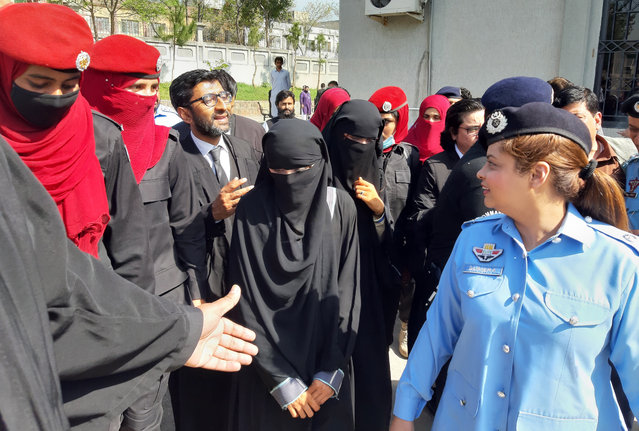 Two Hindu girls leave the Islamabad High Court after the court ordered the government to provide them with protective custody after a hearing in Islamabad, Pakistan, 26 March 2019. According to reports, a Pakistani court issued an order to place two sisters from the Hindu minority community in protective custody after their family claimed they were abducted and forced to convert to Islam. (Photo by T. Mughal/EPA/EFE) 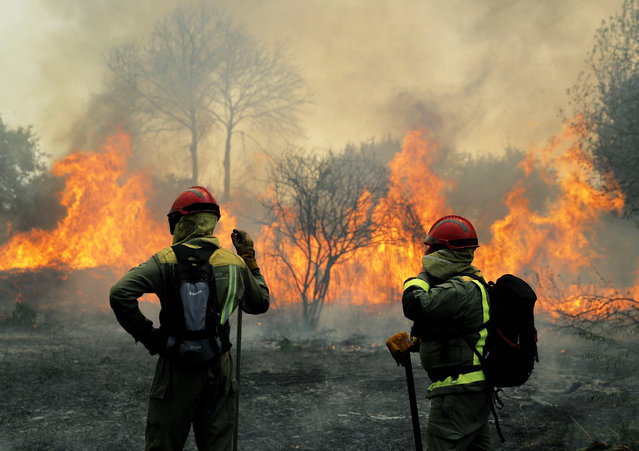 Firefighters try to extinguish a forest fire in the town of Rianxo, province of Galicia, northwestern Spain, 26 March 2019. A total of 750 hectares have been blazed by the forest fire that started a day earlier affecting the towns of Dodro and Rianxo. (Photo by Lavandeira Jr./EPA/EFE) 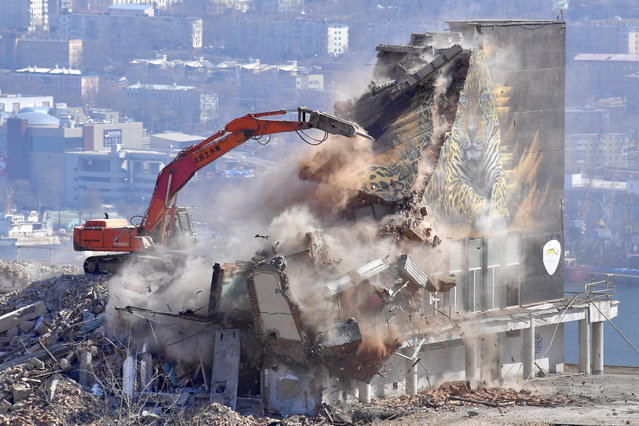 A view of the youth centre building of the Far Eastern State Technical University being torn down on the Eagle's Nest Hill in Vladivostok, Russia on March 26, 2019 to make way for the contruction of a future museum and exhibition centre; a mural of Amur leopard was painted by South African street artist Sonny on one of its walls in 2017 to raise funds and awareness of endangered wildlife species. (Photo by Yuri Smityuk/TASS) 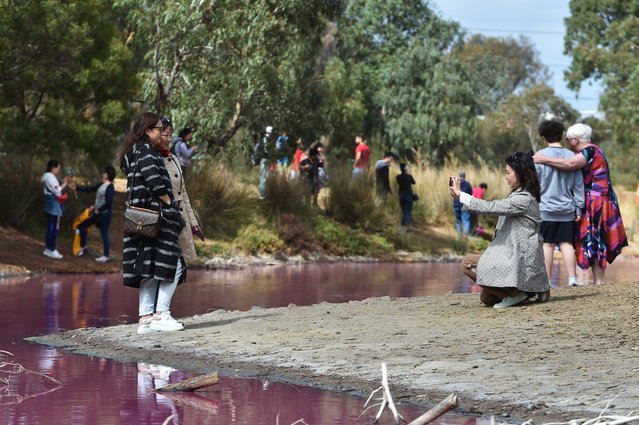 People are seen taking photographs at the Pink lake in Westgate Park, Melbourne, Australia, 26 March 2019. Water in the lake at Westgate park has turned pink due to high salt levels and has become a popular tourist destination. (Photo by James Ross/EPA/EFE) 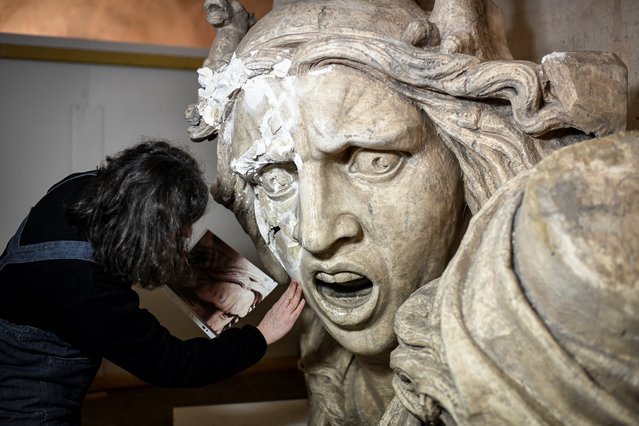 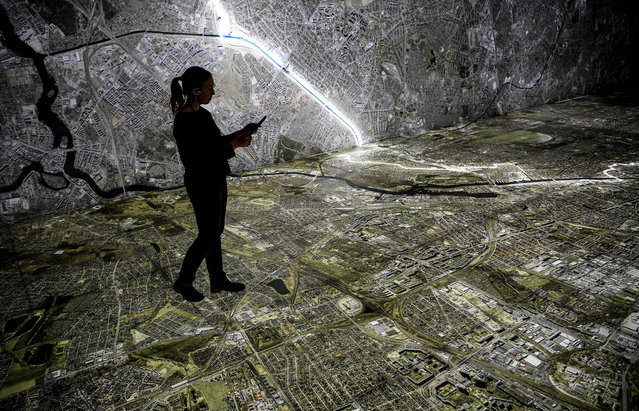 A young woman walks with a tablet over an illuminated aerial photograph of Berlin, marking the course of the Wall and places that had to do with the Stasi in Berlin, Germany on March 25, 2019. The show with the title “Stasi in Berlin – Surveillance and Repression in East and West” will show the hidden infrastructure of the Stasi and will be opened on 28 March 2019 in the Hohenschönhausen Memorial. (Photo by Britta Pedersen/dpa-Zentralbild for “New Exhibition: Hidden Stasi Meetings, Aerial Photo, Tablets”) 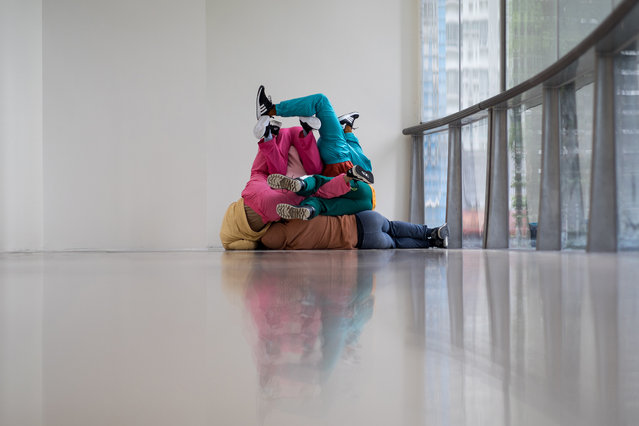 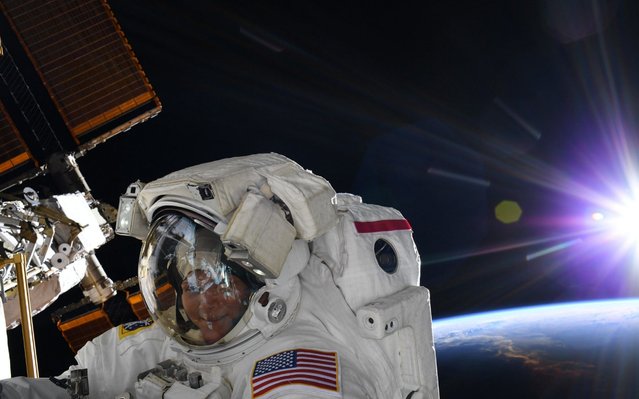