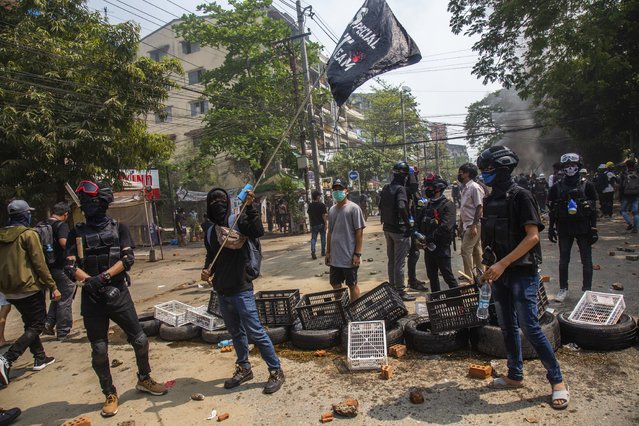 Protesters stand along a roadblock during a rally against the military coup Saturday, March 27, 2021, in Yangon, Myanmar. The head of Myanmar’s junta on Saturday used the occasion of the country’s Armed Forces Day to try to justify the overthrow of the elected government of Aung San Suu Kyi, as protesters marked the holiday by calling for even bigger demonstrations. (Photo by AP Photo/Stringer) 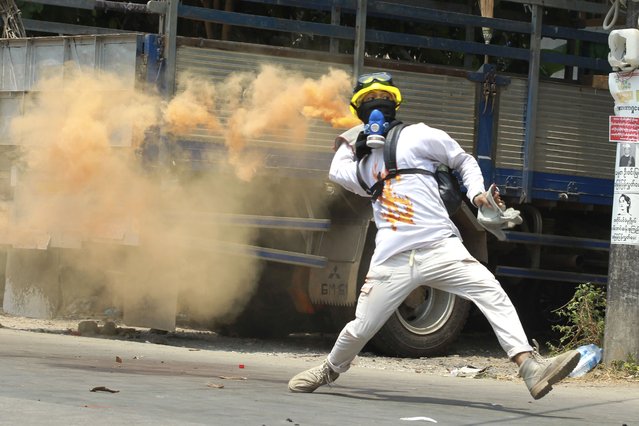 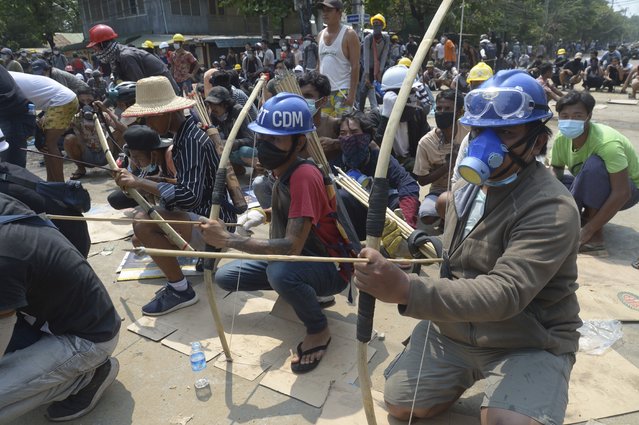 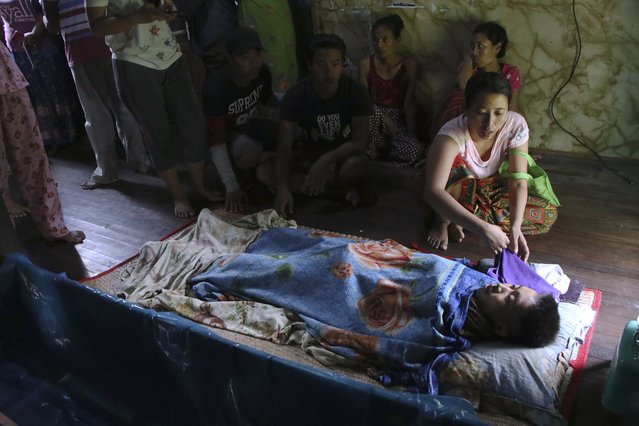 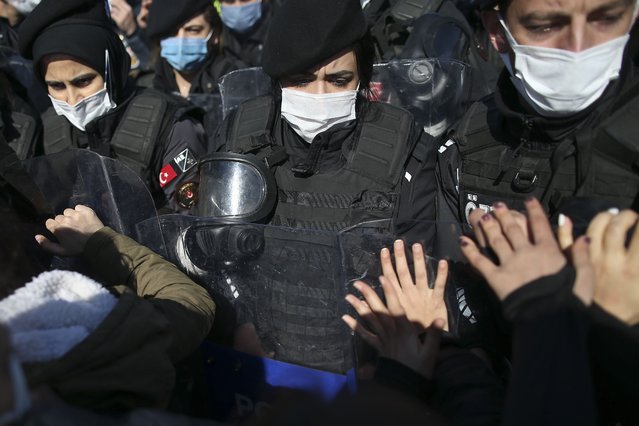 Turkish police officers scuffle with protesters during a demonstration in Istanbul, Saturday, March 27, 2021, against Turkey's withdrawal from Istanbul Convention, an international accord designed to protect women from violence. The Istanbul Convention states that men and women have equal rights and obliges national authorities to take steps to prevent gender-based violence against women, to protect victims and to prosecute perpetrators. Conservative groups and some officials from Turkeys President Recep Tayyip Erdogan's Islamic-oriented ruling party take issue with these terms, saying they promote homosexuality. (Photo by Emrah Gurel/AP Photo) 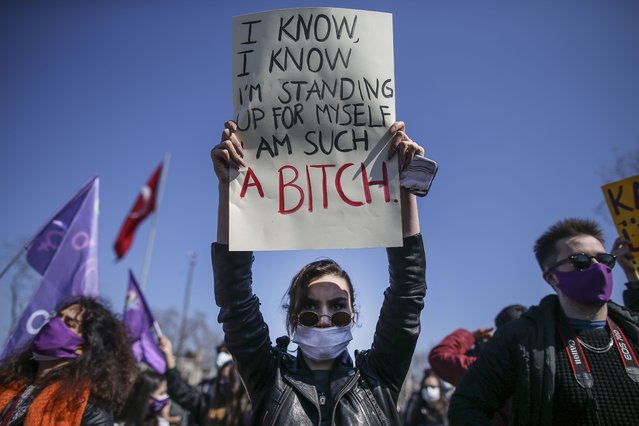 A protester holds a placard during a demonstration in Istanbul, Saturday, March 27, 2021, against Turkey's withdrawal from Istanbul Convention, an international accord designed to protect women from violence. (Photo by Emrah Gurel/AP Photo) 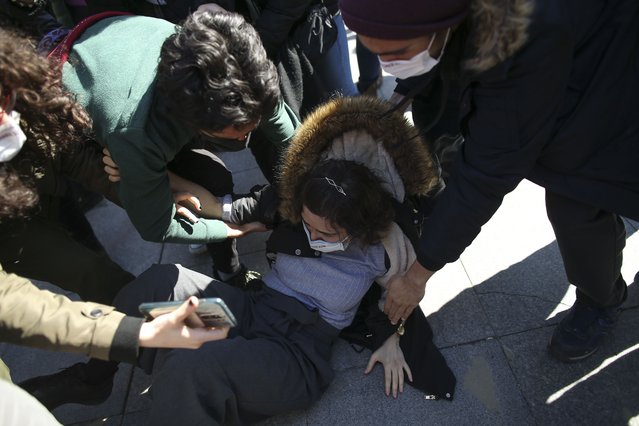 Turkish police officers apprehend a protester during a demonstration in Istanbul, Saturday, March 27, 2021, against Turkey's withdrawal from Istanbul Convention, an international accord designed to protect women from violence. (Photo by Emrah Gurel/AP Photo) 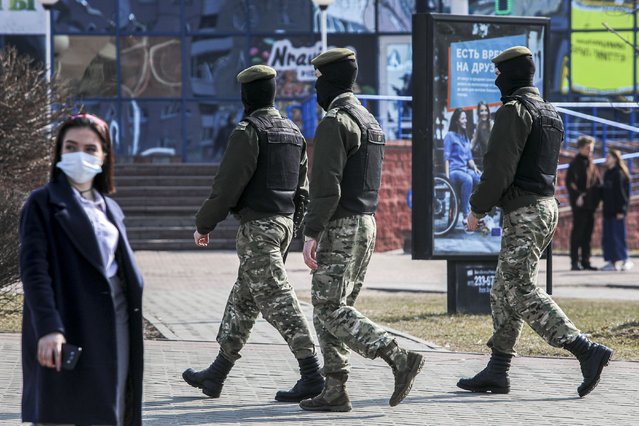 Police patrol a street to prevent an opposition action to protest the official presidential election results in Minsk, Belarus, Saturday, March 27, 2021. Belarusian opposition has urged people to protest against repressions in the country and Lukashenko's regime. (Photo by BelaPan via AP Photo) 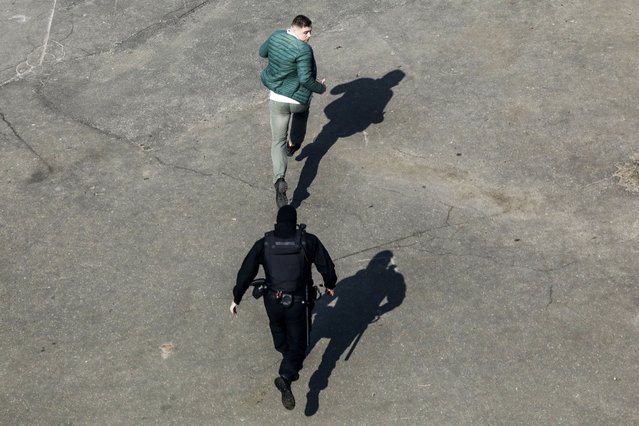 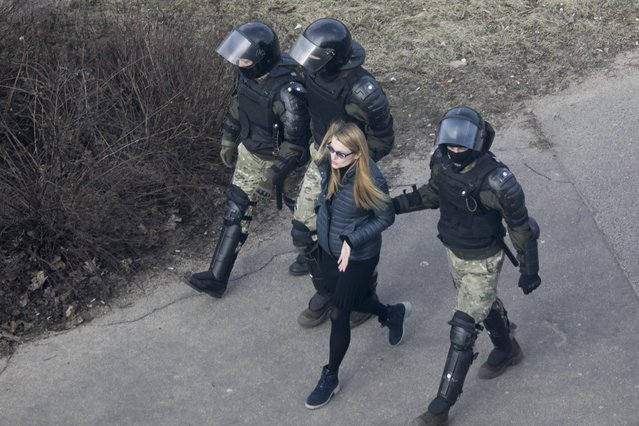 Police officers detain a demonstrator as they prevent an opposition action to protest the official presidential election results in Minsk, Belarus, Saturday, March 27, 2021. Police in the capital of Belarus have arrested more than 100 people who assembled for a protest march to call for the resignation of the country's authoritarian president. The planned event in Minsk on Saturday indicated that supporters of the political opposition seek to revive the wave of mass protests that gripped Belarus for months last year but were dormant during the winter. (Photo by BelaPan via AP Photo) 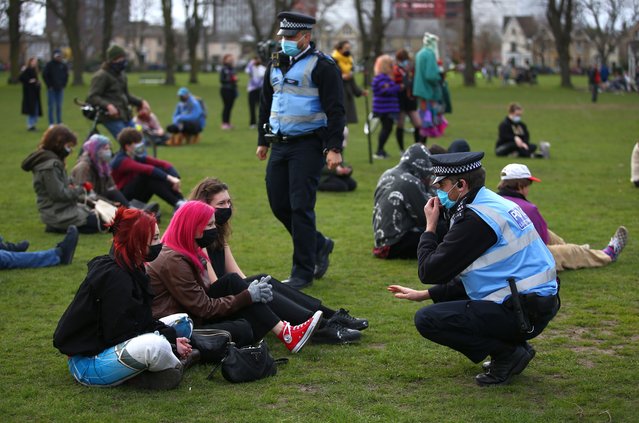 Met Police officers speak to demonstrators attending a “Kill the Bill” protest in Kingston upon Thames on March 27, 2021 in London, United Kingdom. “Kill the Bill” protests, in opposition to the new Police, Crime, Sentencing and Court Bill, have been held across the UK over the last week. A gathering in Bristol turned violent last week as demonstrators clashed with police and set a police van on fire. The proposed legislation, which would apply to England and Wales, covers a wide range of issues, would broaden the police's authority for regulating protests. (Photo by Hollie Adams/Getty Images) 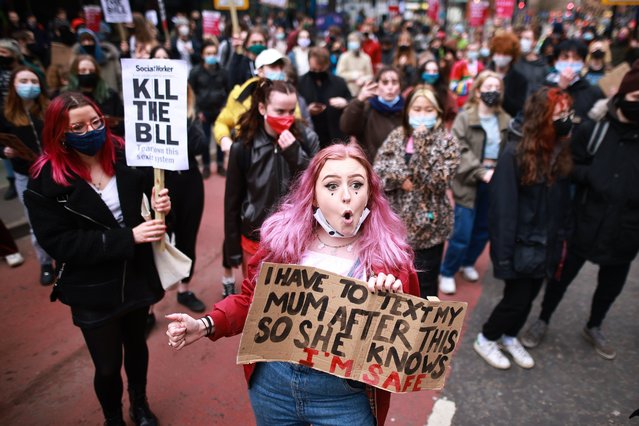 Protestors hold placards as they sit on the street during a Kill The Bill protest against the Police, Crime, Sentencing and Courts Bill, in Manchester, north west England on March 27, 2021. The police, crime, sentencing and courts bill would give police in England and Wales more power to impose conditions on peaceful protests, including those they deem to be too noisy or a nuisance to the community. Critics argue this infringes on the right to free and peaceful expression. (Photo by London News Pictures) 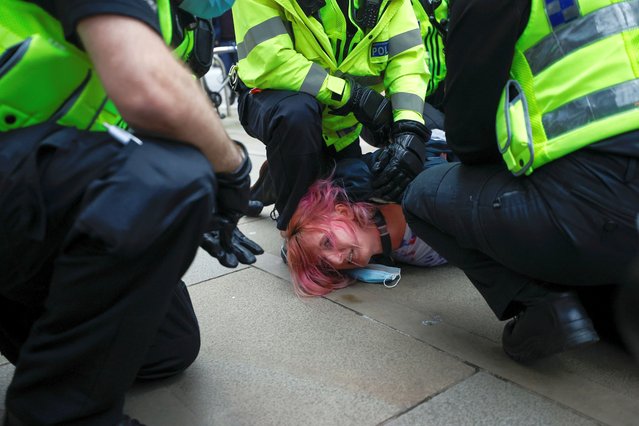 Police officers detain a demonstrator during a protest against a new proposed policing bill, in Manchester, Britain, March 27, 2021. (Photo by Phil Noble/Reuters) 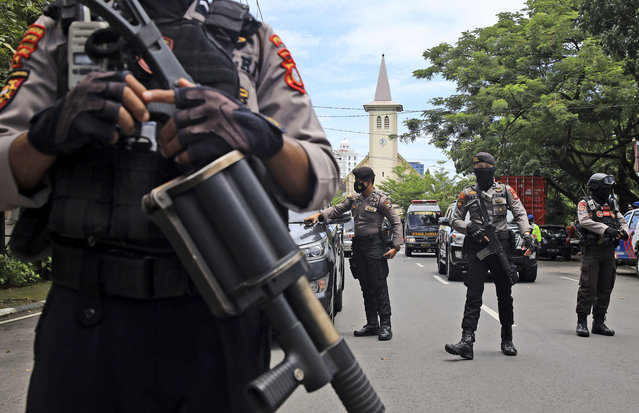 A woman crosses a street as police surround a bar they raid in Warsaw, Poland, Friday March 26, 2021. A raft of new pandemic restrictions take effect in Poland on Saturday to slow the spread of infection in what has become of the new global hot spot for the virus, but even earlier restrictions are being defied by some. (Photo by Czarek Sokolowski/AP Photo) 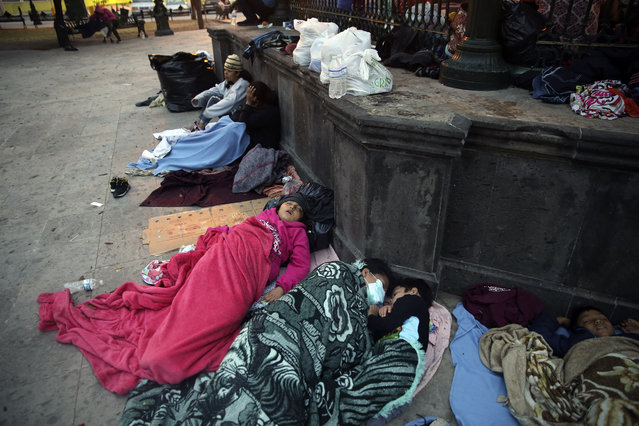 Migrants sleep under a gazebo at a park in the Mexican border city of Reynosa, Saturday, March 27, 2021. Dozens of migrants who earlier tried to cross into the U.S. in order to seek asylum have turned this park into an encampment for those expelled from the U.S. under pandemic-related presidential authority. (Photo by Dario Lopez-Mills/AP Photo) 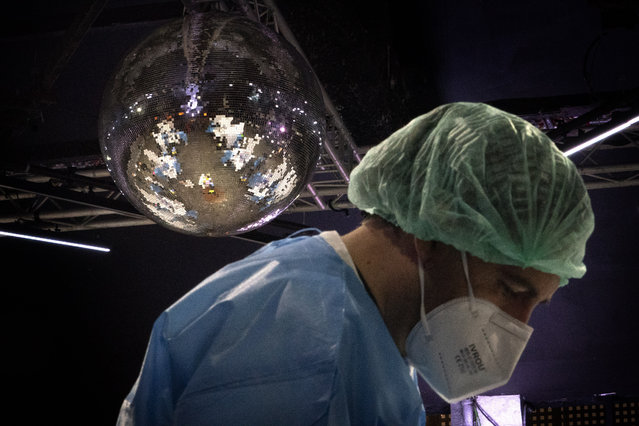 A health worker is tested for coronavirus ahead of a music concert in Barcelona, Spain, Saturday, March 27, 2021. Five thousand music lovers are set to attend a rock concert in Barcelona on Saturday after passing a same-day COVID-19 screening to test its effectiveness in preventing outbreaks of the virus at large cultural events. The show by Spanish rock group Love of Lesbian has the special permission of Spanish health authorities. While the rest of the country is limited to gatherings of no more than four people in closed spaces, the concertgoers will be able to mix freely while wearing face masks. (Photo by Emilio Morenatti/AP Photo) 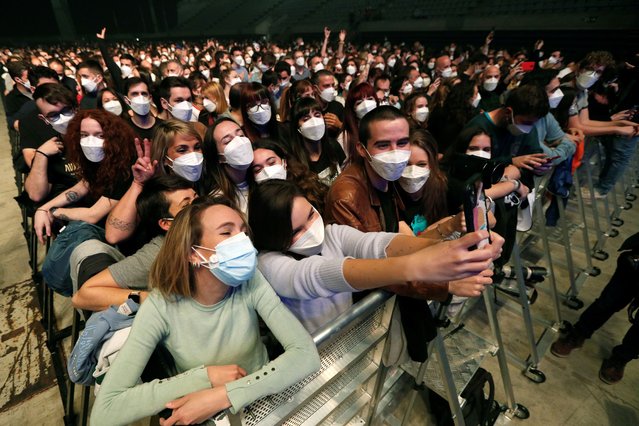 Members of the audience take a selfie as the Spanish band Love of Lesbian performs on stage in front of 5,000 people at the Palau Sant Jordi arena in Barcelona, Catalonia, Spain, 27 March 2021. This is the first crowded concert in Spain since the beginning of the COVID-19 coronavirus pandemic a year ago. People had to go through a PCR test and were given FPP2 masks before entering the test concert venue. (Photo by Alejandro Garcia/EPA/EFE) 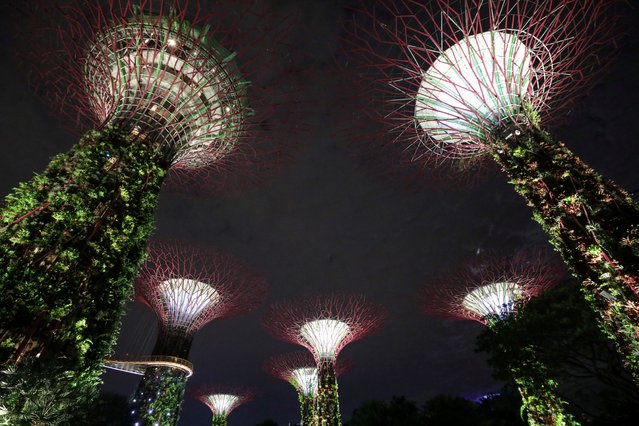 Artificial tree-like structures called Supertrees are seen before lights were switched off to commemorate Earth Hour, at Gardens By the Bay, in Singapore, March 27, 2021. (Photo by Dawn Chua/Reuters) 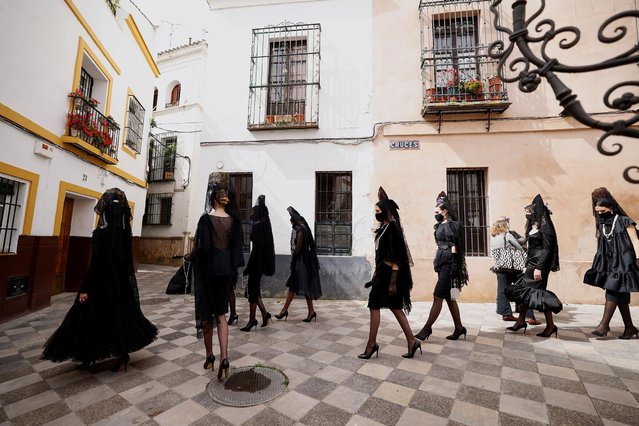 Models wearing mantilla dresses walk during an event to show-off traditional mantilla costumes created by different designers, amid restrictions due to the coronavirus disease (COVID-19) pandemic, in Seville, Spain on March 26, 2021. (Photo by Marcelo del Pozo/Reuters) 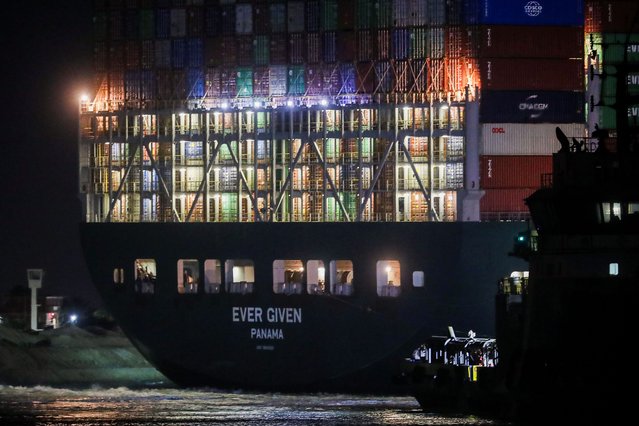 This picture taken late on March 27, 2021 shows a view of a tugboat by the Panama-flagged MV “Ever Given” (owned by Taiwan-based Evergreen Marine) container ship, which has been wedged diagonally across the span of the canal about six kilometres north of the Suez Canal's entrance by the Red Sea port city of Suez since March 23, blocking the waterway in both directions. (Photo by Ahmed Hasan/AFP Photo) 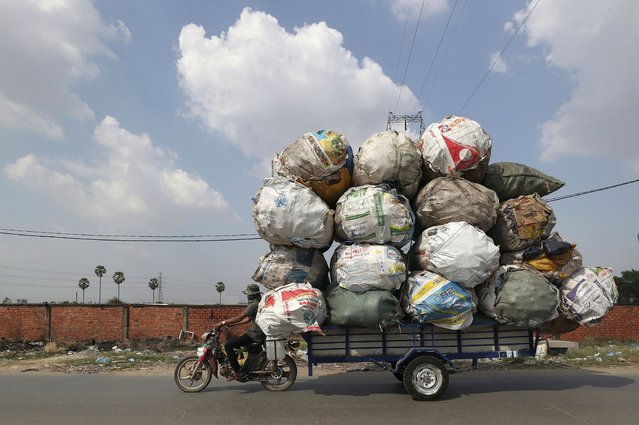