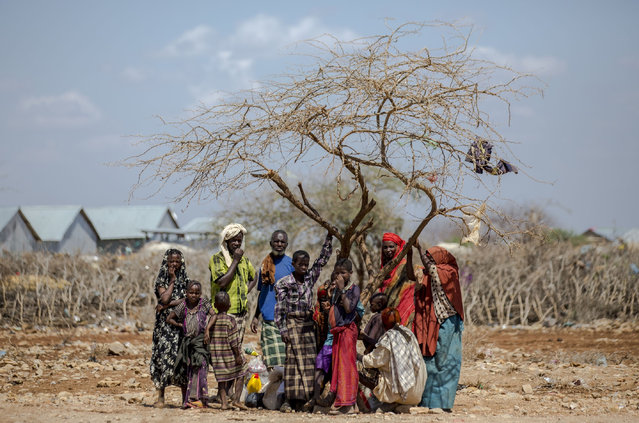 Somalian wait to take shelter under a tree at Balanbaalis camp in Somalia's Bay state on March 27, 2017. In the central and south parts of Somalia, extreme drought threatens to leave many people hungry and vulnerable to disease epidemics. Somalians forced to live in the Balanbaalis camp in Somalia's Bay state due to clashes and terror in the country are fighting drought and disease from makeshift tents. As there are very limited water sources in the region, people are queuing for water at wells drilled by aid organizations. (Photo by Arif Hudaverdi Yaman/Anadolu Agency/Getty Images) 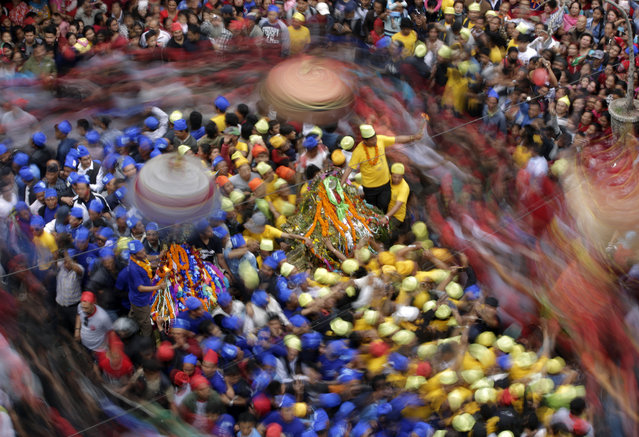 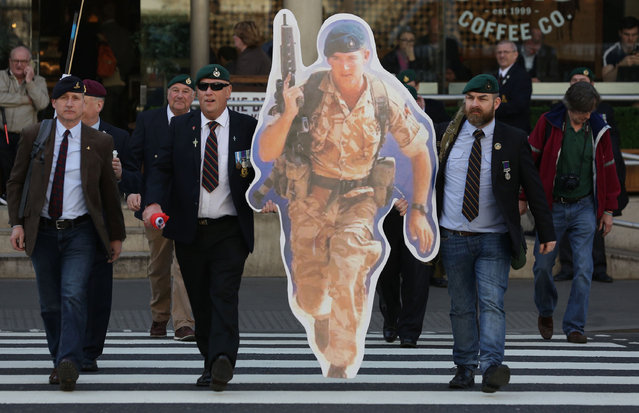 Supporters of jailed former British soldier Alexander Blackman, Marine A, arrive at The Royal Courts of Justice in London on March 28, 2017, to attend the result of his sentence. Blackman, the Royal Marine who shot an injured Taliban fighter in Afghanistan in 2011 will learn his sentence for diminished responsibility manslaughter on March 28, after his 2013 murder conviction was quashed by leading judges. (Photo by Daniel Leal-Olivas/AFP Photo) 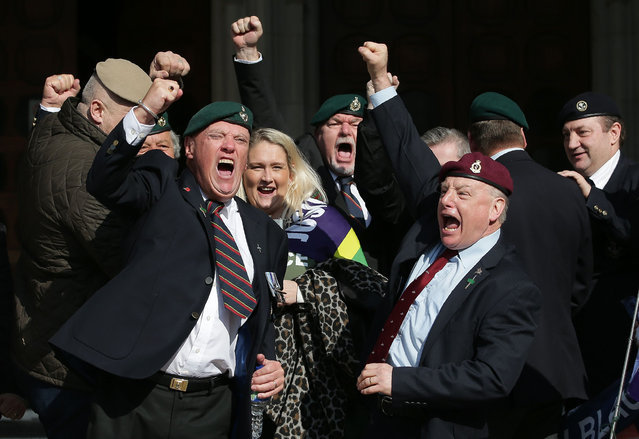 Supporters of former British soldier Alexander Blackman, Marine A, react outside the The Royal Courts of Justice in London on March 28, 2017, after learning the result of his sentence Blackman, the Royal Marine who shot an injured Taliban fighter in Afghanistan in 2011, had his sentence reduced to seven years. Tuesday, after a court martial appeal downgraded his previous conviction to manslaughter. (Photo by Daniel Leal-Olivas/AFP Photo) 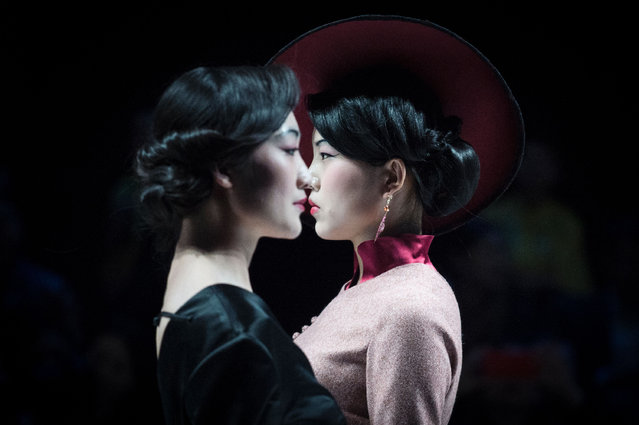 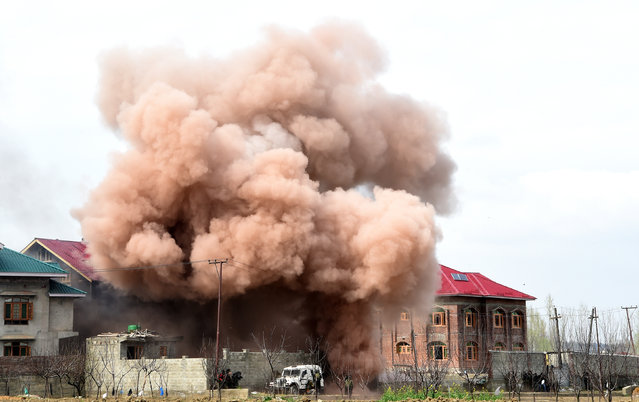 Indian army soldiers explode a residential house during clashes between suspected rebels and Indian forces in Chadoora, in Badgam district south of Srinagar, on March 28, 2017. Two civilians and one rebel were killed and at least 14 people injured March 28 in clashes between protesters and troops and police in Indian-administered Kashmir, police said. (Photo by Tauseef Mustafa/AFP Photo) 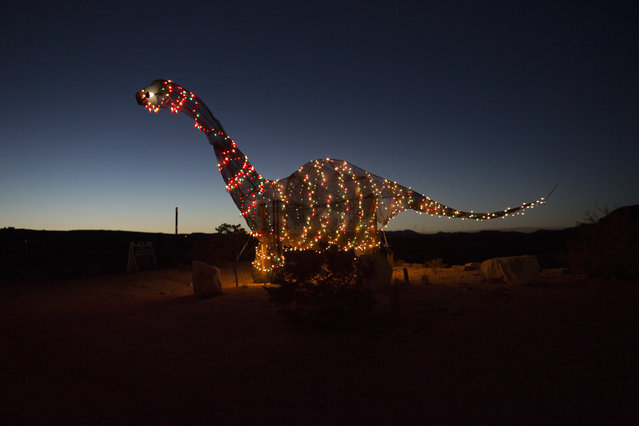 A dinosaur statue stands outside a store off the highway in Terlingua, Texas, near the US-Mexico border, Monday, March 27, 2017. (Photo by Rodrigo Abd/AP Photo) Women in kimonos take photos under the cherry blossoms along the Tidal Basin on a misty morning in Washington, U.S., March 27, 2017. (Photo by Kevin Lamarque/Reuters) The relative of an inmate looks at a police helicopter flying over the Cadereyta prison after a riot broke out at the prison, in Cadereyta, on the outskirts of Monterrey, Mexico March 27, 2017. (Photo by Daniel Becerril/Reuters) 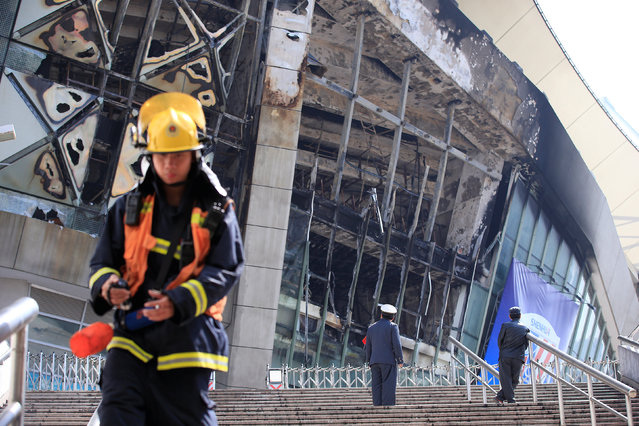 Rescue workers stand outside the site where a fire broke out at the Shanghai Hongkou soccer stadium in Shanghai, China March 28, 2017. (Photo by Aly Song/Reuters) 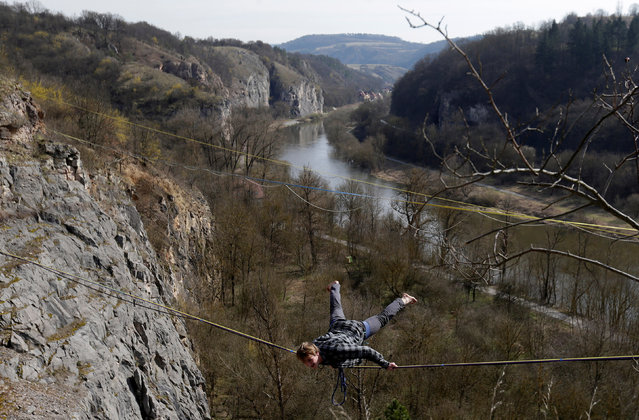 A participant balances on a line during the highline event near the town of Beroun, Czech Republic on March 25, 2017. (Photo by David W. Cerny/Reuters) 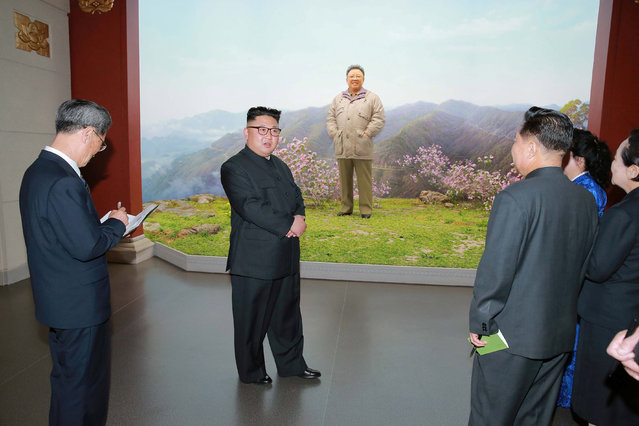 Bradley Mitchell inspects the damage to his uncle's boat after it smashed against the bank at Shute Harbour, Airlie Beach, Australia, Wednesday, March 29, 2017. Cyclone Debbie, which slammed into the coast of Queensland state on Tuesday with winds up to 260 kilometers (160 miles) an hour, weakened quickly as it moved inland and was downgraded to a tropical low by Wednesday morning. (Photo by Dan Peled/Reuters/AAP) 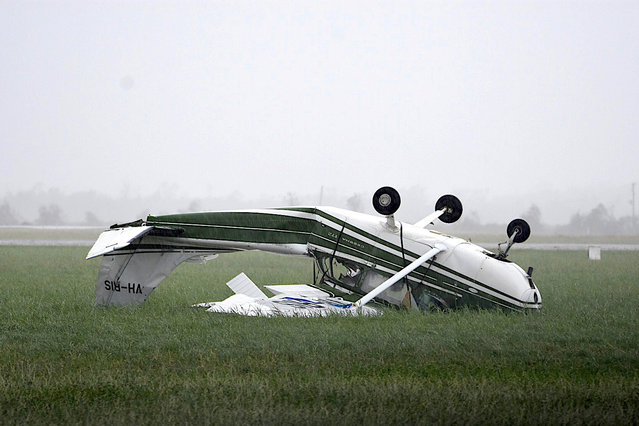 A plane that was flipped by strong winds from Cyclone Debbie is seen at the airport in the town of Bowen, Australia, Wednesday, March 29, 2017. (Photo by Sarah Motherwell/Reuters/AAP) 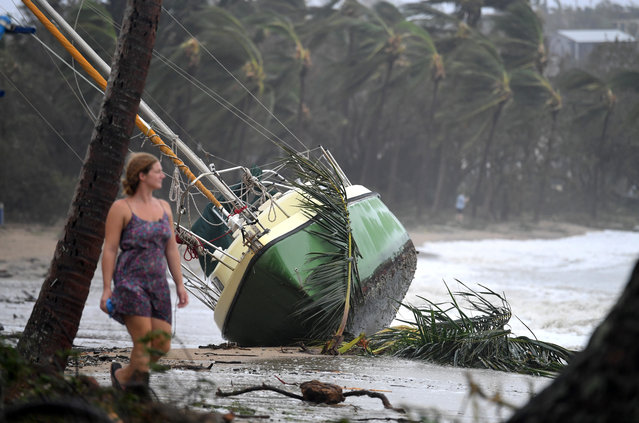 A local resident walks past a yacht that was washed ashore in Airlie Beach, Australia, Wednesday, March 29, 2017. (Photo by Dan Peled/Reuters/AAP) 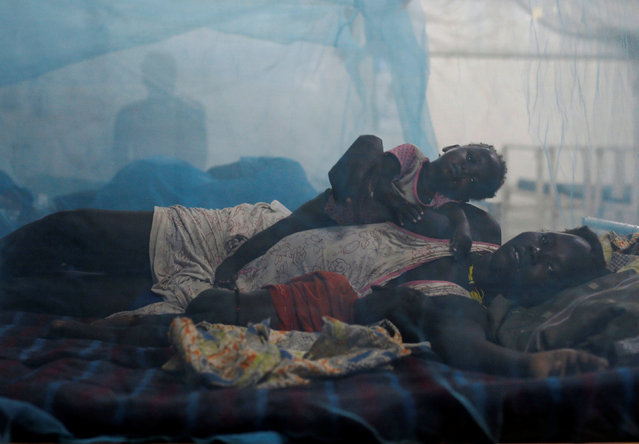 A woman rests in bed with her children in the paediatric ward at the Medecins Sans Frontieres (MSF) hospital inside the United Nations Mission in South Sudan (UNMISS) base, Bentiu, Rubkona County, South Sudan March 23, 2017. (Photo by Siegfried Modola/Reuters) A goat begs for food as people have a meal and beer at the Beichelstein-Alpe outdoor restaurant near Seeg, southern Germany, on March 27, 2017. (Photo by Karl-Josef Hildenbrand/AFP Photo/DPA) 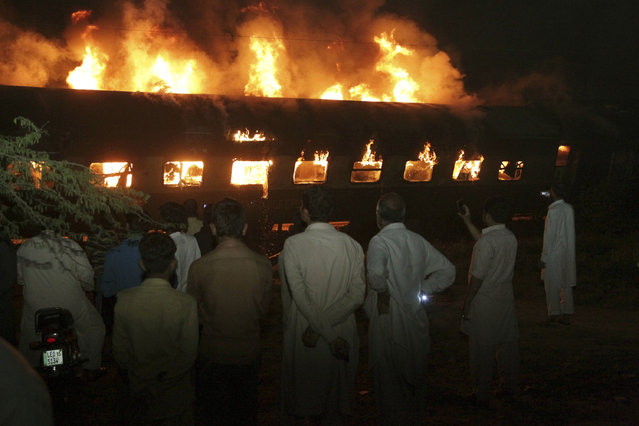 People look at a burning passenger train in Shaikhupura, near Lahore, Pakistan, early Tuesday, March 28, 2017. Authorities in Pakistan say a passenger train has collided with an oil tanker truck, killing at least one person and injuring others. (Photo by K.M. Chaudary/AP Photo) 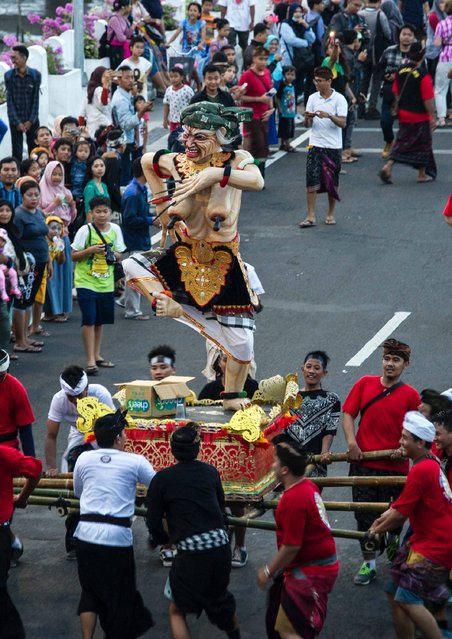 Indonesian devotees parade with effigies known as “Ogoh-Ogoh” to celebrate the festival of Nyepi, “Day of Silence”, in Surabaya on March 27, 2017. (Photo by Juni Kriswanto/AFP Photo) 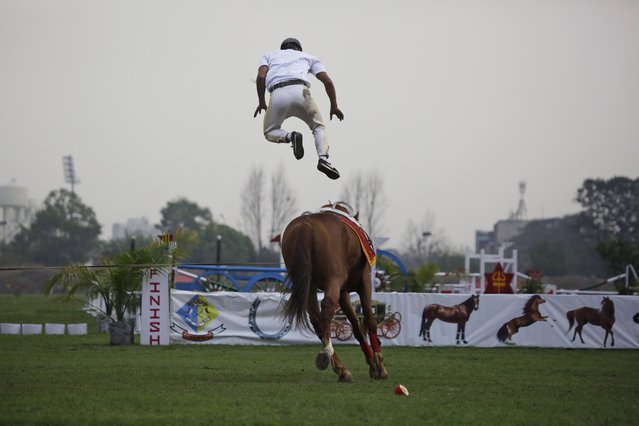 A Nepalese army soldier demonstrates his horse riding skills during the Ghode Jatra festival, an annual horse festival in Kathmandu, Nepal, Monday, March 27, 2017. According to legend, the festival is held to celebrate the victory over a demon named Tundi and people believe that the clamor of horses' hooves during the festival keeps the demon's spirit away. (Photo by Niranjan Shrestha/AP Photo) 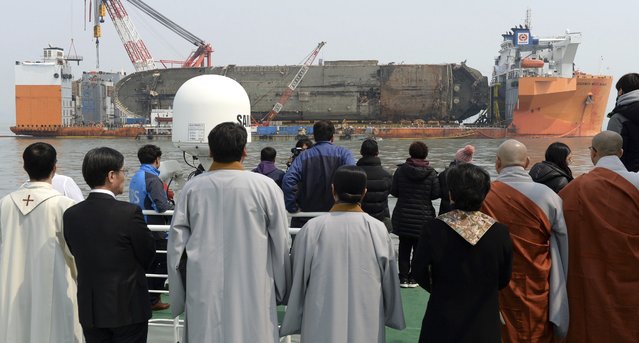 Relatives of the missing victims and clergymen attend religious services on a boat, near the sunken ferry Sewol on a semi-submersible transport vessel in waters off Jindo, South Korea, Tuesday, March 28, 2017. South Korea has held a memorial ceremony at sea for the nine passengers still missing from the 2014 ferry disaster that killed 304 passengers near the ship's wreckage that was raised from the waters last week. (Photo by Yonhap via AP Photo) 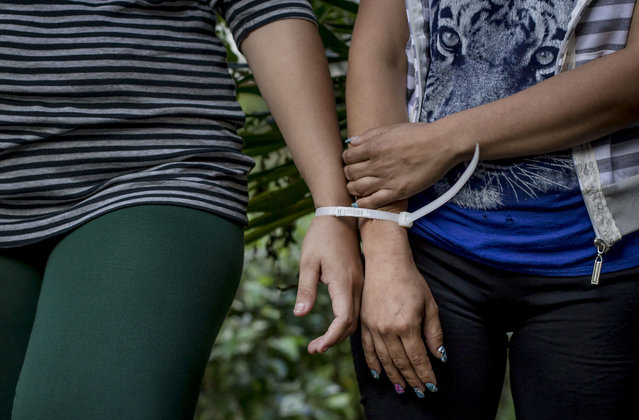 This December 8, 2016 file photo show two women who are accused by police of being part of the Mara Salvatrucha Gang are presented to the media at police headquarters in San Salvador, El Salvador. Authorities were surprised when a woman escaped the Mara Salvatrucha gang and told prosecutors its members had kidnapped her and forced her into a “black widow” arranged marriage. After the wedding, her new husband was killed in order to collect an insurance policy. (Photo by Salvador Melendez/AP Photo) 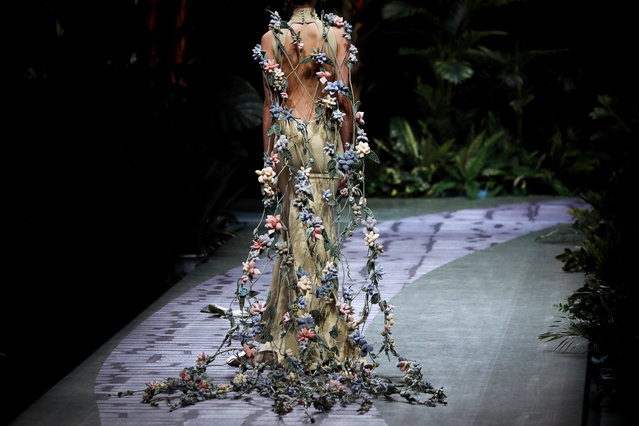