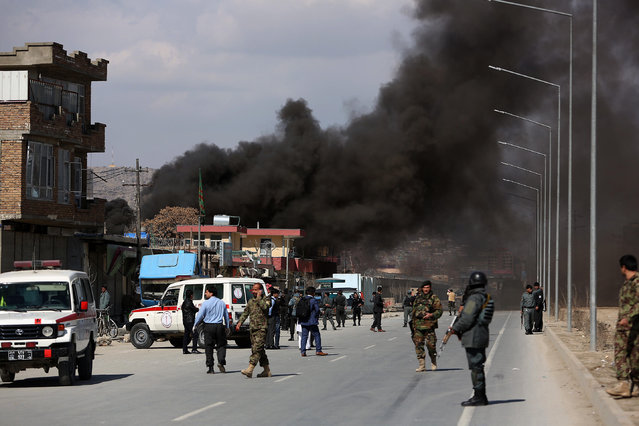 Smoke rises from a district police headquarters after a suicide bombing in Kabul, Afghanistan, Wednesday, March 1, 2017. An Afghan official says that a suicide car bomber attacked at the gates of a police station in the western part of the capital, Kabul. (Photo by Rahmat Gul/AP Photo) 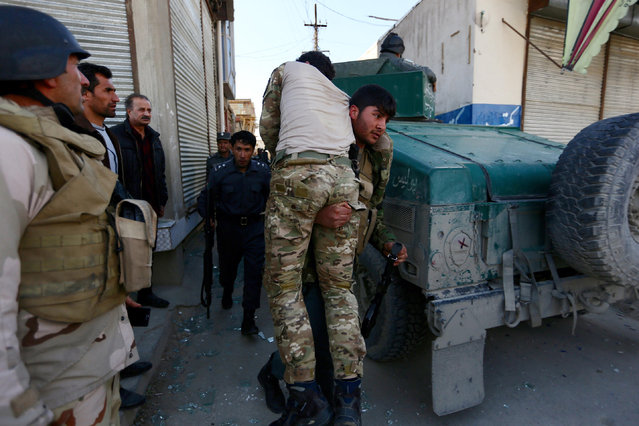 Afghan security forces help a comrade wounded in a suicide attack in Kabul, Afghanistan, Wednesday, March 1, 2017. A pair of suicide bombings, both claimed by the Taliban, struck the Afghan capital, an Afghan official said. (Photo by Rahmat Gul/AP Photo) 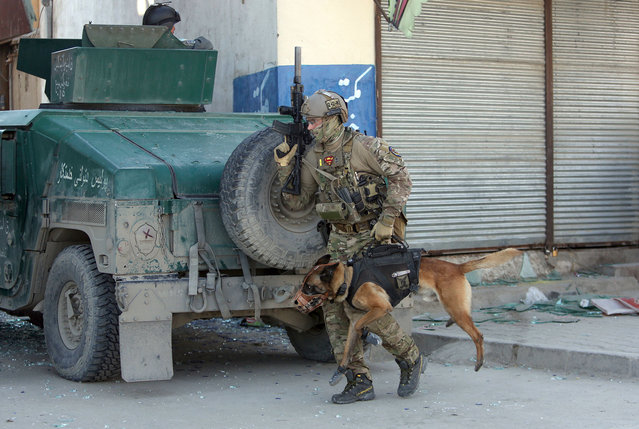 A foreign soldier arrives with his dog on the scene after a suicide bombing in Kabul, Afghanistan, Wednesday, March 1, 2017. A pair of suicide bombings, both claimed by the Taliban, struck the Afghan capitall, an Afghan official said. (Photo by Rahmat Gul/AP Photo) 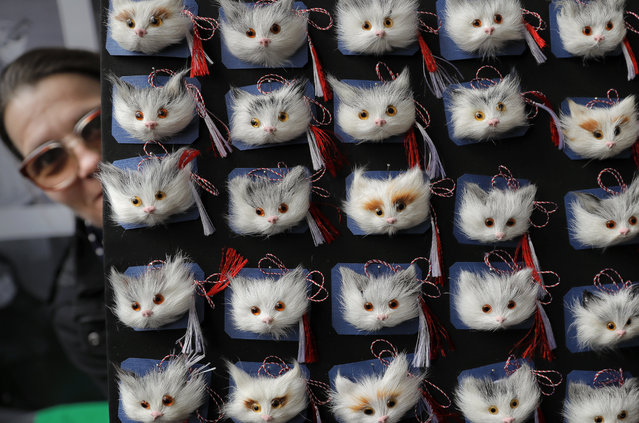 In this Tuesday, February 28, 2017, photo, spring charms are on display at the Peasant's Museum in Bucharest, Romania. Millions of East Europeans celebrated the arrival of spring Wednesday with charms tied with red-and-white string, a centuries-old custom symbolizing hope and a new season. (Photo by Vadim Ghirda/AP Photo) 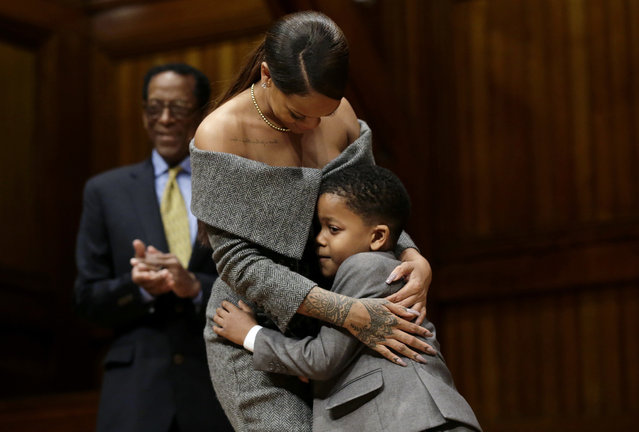 Rihanna, center, and Chase Sullivan, right, son of Harvard University professors, hug after the popular singer was presented with the 2017 Harvard University Humanitarian of the Year Award during ceremonies at the school, Tuesday, February 28, 2017, in Cambridge, Mass. Allen Counter, director of the Harvard Foundation, looks on behind left. (Photo by Steven Senne/AP Photo) 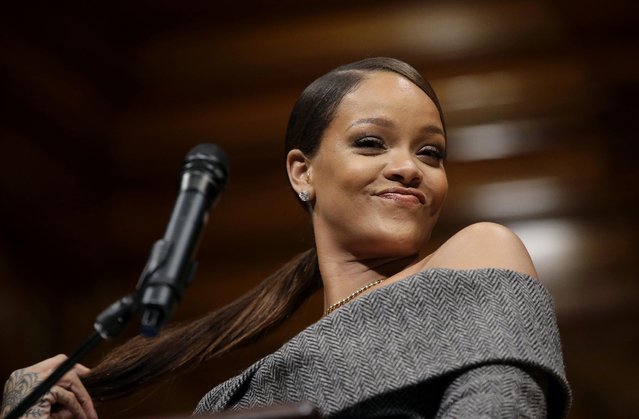 Singer Rihanna addresses an audience after being presented with the 2017 Harvard University Humanitarian of the Year Award during ceremonies, Tuesday, February 28, 2017, at the Sanders Theatre on the school's campus, in Cambridge, Mass. (Photo by Steven Senne/AP Photo) 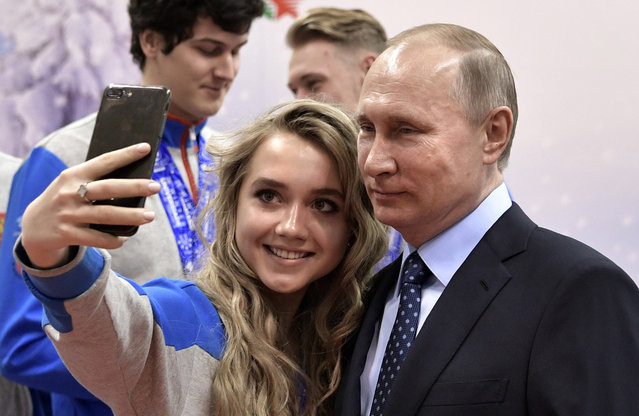 President Vladimir Putin, right, poses for a selfie during a visit to the Academy of Biathlon in Krasnoyarsk, Russia on Wednesday, March 1, 2017. (Photo by Alexei Nikolsky/Sputnik, Kremlin Pool Photo via AP Photo) 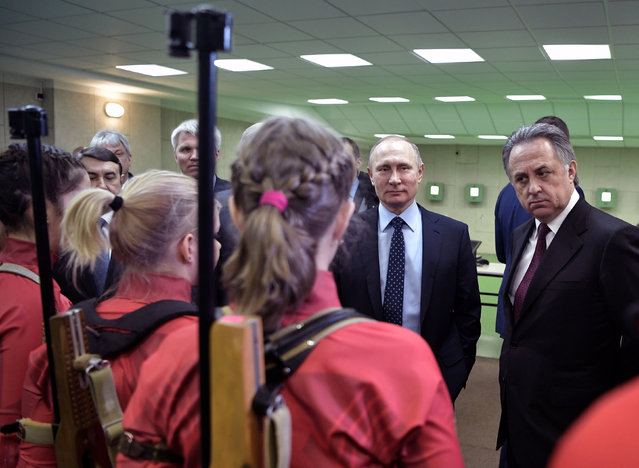 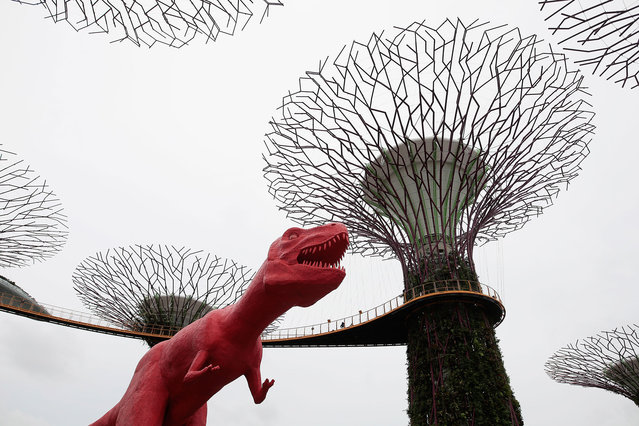 A Tyrannosaurus Rex statue stands among Supertrees at the Gardens by the Bay in Singapore on March 1, 2017. A total of eleven dinosaur statues have been placed in the vicinity of the Supertrees as part of the Children's' Festival, which will take place from 10 March until 02 April 2017. (Photo by Wallace Woon/EPA) 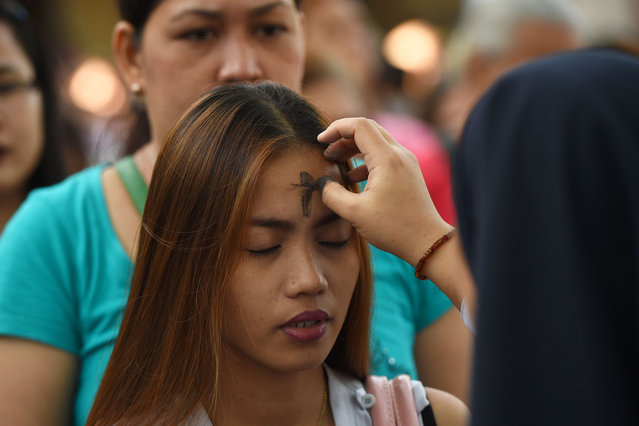 Catholic faithfuls queue to have their foreheads applied with ash by nuns on the observance of Ash Wednesday at a church ground in Manila on March 1, 2017. The 40- day period of Lent begins on Ash Wednesday, with Catholics around the world observing the season which culminates in Easter Sunday. (Photo by Ted Aljibe/AFP Photo) 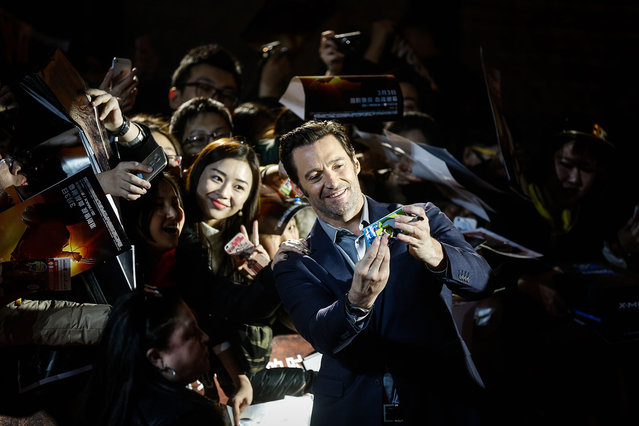 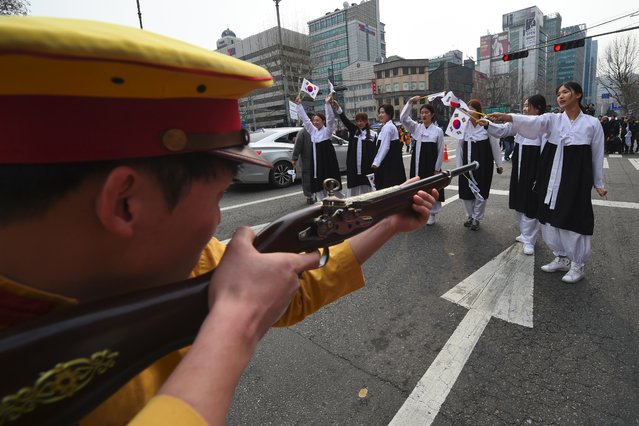 South Korean activists dressed as colonial-era Japanese soldiers reenact a crackdown of the independence movement during celebrations of the 98th Independence Movement Day in Seoul on March 1, 2017. South Korea on March 1 marked the anniversary of the country's 1919 uprising against the 1910-1945 Japanese colonial rule. (Photo by Jung Yeon-Je/AFP Photo) 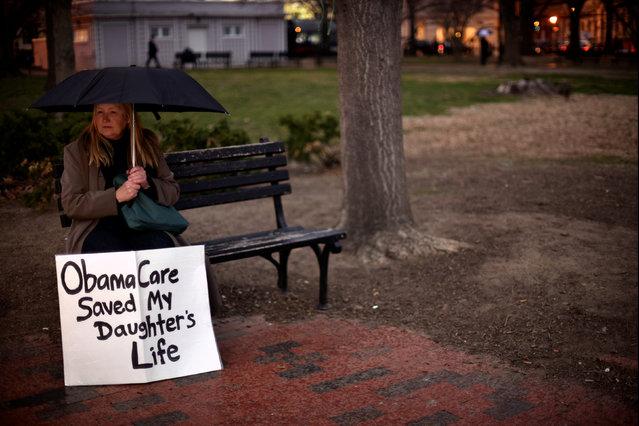 Beverly Hopper of Pine Grove, California, attends a protest rally against U.S. President Donald Trump in the rain outside the White House in Washington February 28, 2017. (Photo by James Lawler Duggan/Reuters) 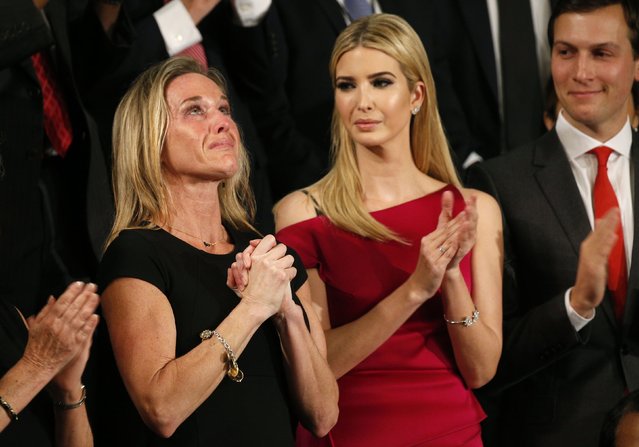 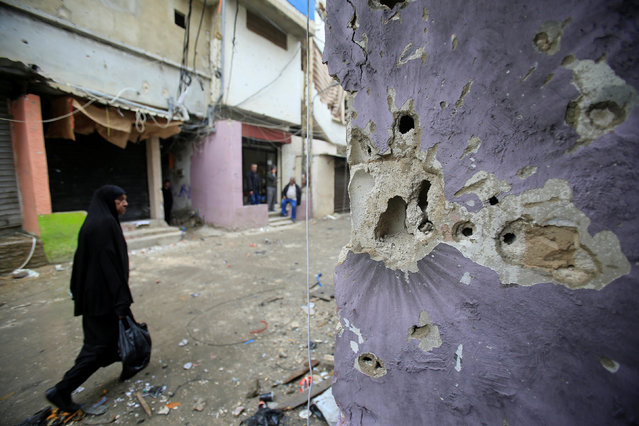 A woman walks past a bullet-riddled wall in the Ain el-Hilweh Palestinian refugee camp in southern Lebanon, March 1, 2017. (Photo by Ali Hashisho/Reuters) 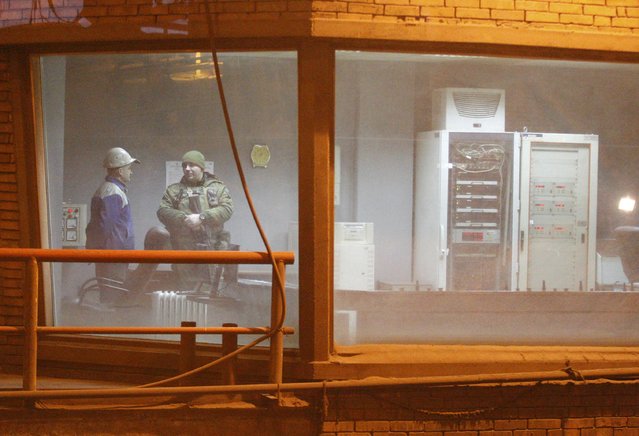 An armed man speaks with an employee during the visit of head of the separatist self-proclaimed Donetsk People's Republic Alexander Zakharchenko (not pictured) to the Yuzovsky metallurgical plant in Donetsk, Ukraine, March 1, 2017. (Photo by Alexander Ermochenko/Reuters) 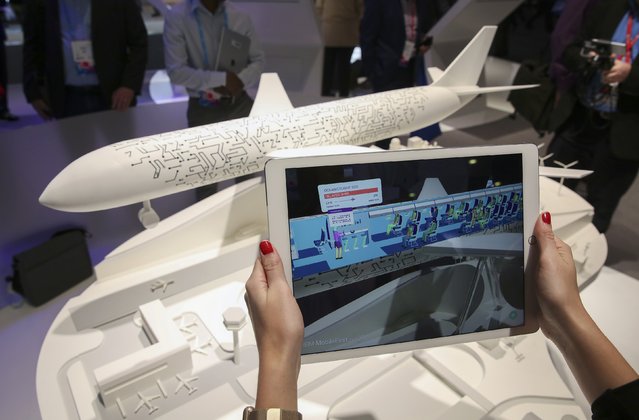 The IBM MobileFirst, for iOS app for use by airline industry personnel, is displayed at the IBM stand at the Mobile World Congress in Barcelona, Spain, March 1, 2017. (Photo by Paul Hanna/Reuters) 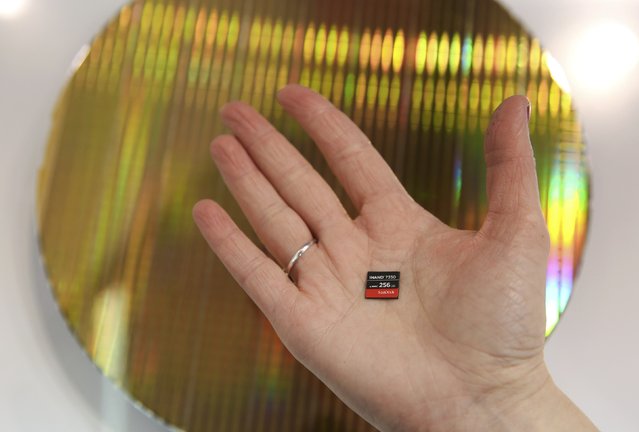 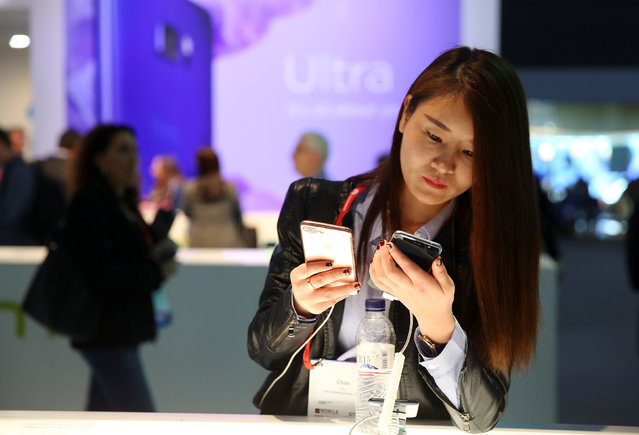 A woman views the new HTC U Ultra at the HTC stand at the Mobile World Congress in Barcelona, Spain March 1, 2017. (Photo by Paul Hanna/Reuters) 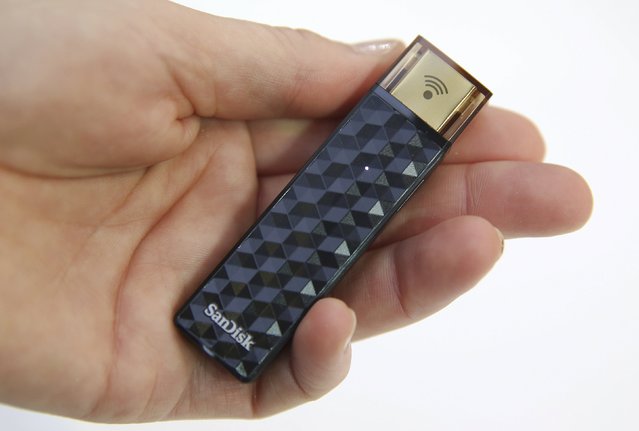 The new SanDisk Connect Wireless Stick, with 256gb capacity, is displayed at the SanDisk stand at the Mobile World Congress in Barcelona, Spain, March 1, 2017. (Photo by Paul Hanna/Reuters) 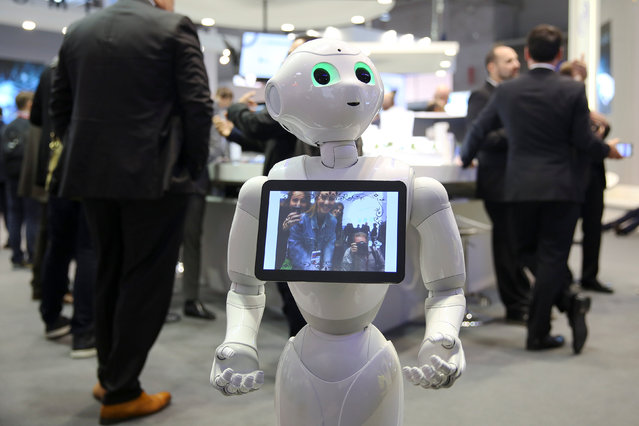 A robot displays a photograph it took of attendees at the Oberthur Technologies stand at the Mobile World Congress in Barcelona, Spain March 1, 2017. (Photo by Paul Hanna/Reuters) 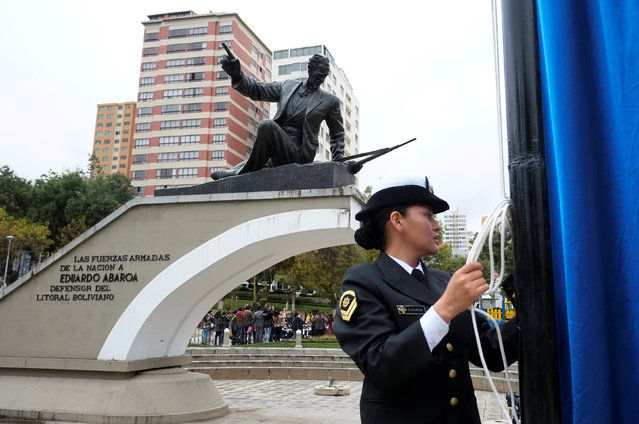 A Bolivian navy officer hoists a flag during a ceremony that marks “The month of the Sea” at the Eduardo Avaroa square in La Paz, Bolivia March 1, 2017. Bolivia lost its access to the sea to Chile during the 1879-1883 War of the Pacific. (Photo by David Mercado/Reuters) French police secure the streets around the house of the Troadec family in Orvault near Nantes, France, March 1, 2017. The couple and their two children have been missing for nearly two weeks. (Photo by Stephane Mahe/Reuters) 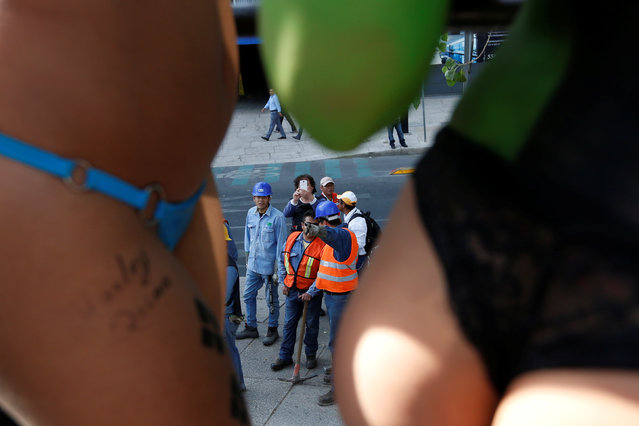 Workers look at exotic models and p*rn actresses standing on the top of a bus waving to people to promote the “Expo s*x and Eroticism” adult exhibition in Mexico City, Mexico March 1, 2017. (Photo by Carlos Jasso/Reuters) 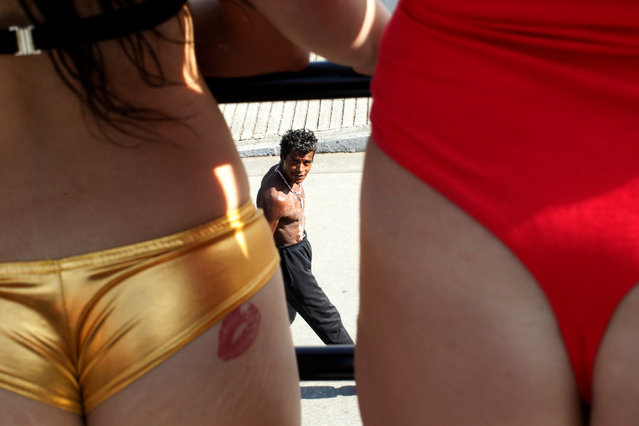 A man looks at models and p*rn actresses standing on the top of a bus waving to people to promote the “Expo s*x and Eroticism” adult exhibition in Mexico City, Mexico March 1, 2017. (Photo by Carlos Jasso/Reuters) 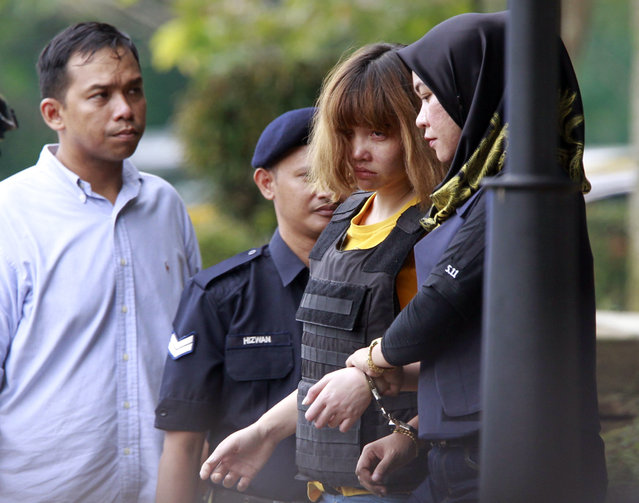 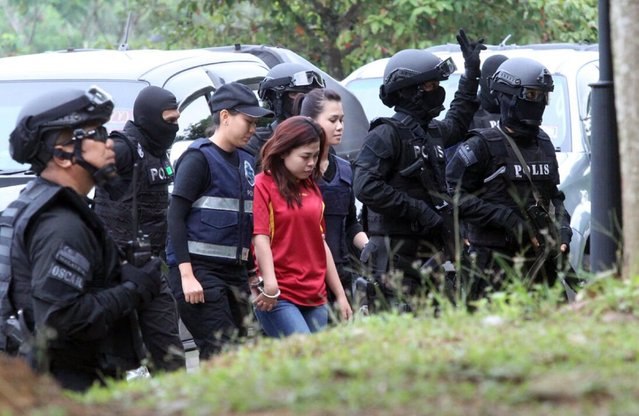 Suspect Siti Aisyah from Indonesia, center, in the ongoing assassination investigation, is escorted by police officers out from Sepang court in Sepang, Malaysia on Wednesday, March 1, 2017. Two women accused of smearing VX nerve agent on Kim Jong Nam, the estranged half brother of North Korea's leader, were charged with murder Wednesday after arriving in court under heavy protection. (Photo by AP Photo) 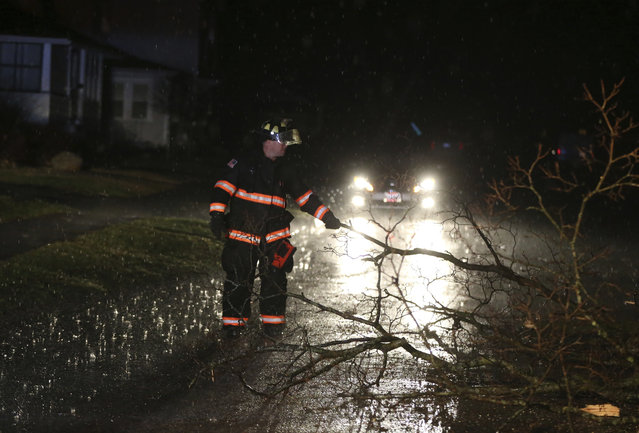 A firefighter removes fallen tree branches from the road in Ottawa, Ill., on Tuesday, February 28, 2017. Tornadoes touched down in the upper Midwest and northern Arkansas on Tuesday, in a spring-like storm system. (Photo by Nuccio DiNuzzo/Chicago Tribune via AP Photo) 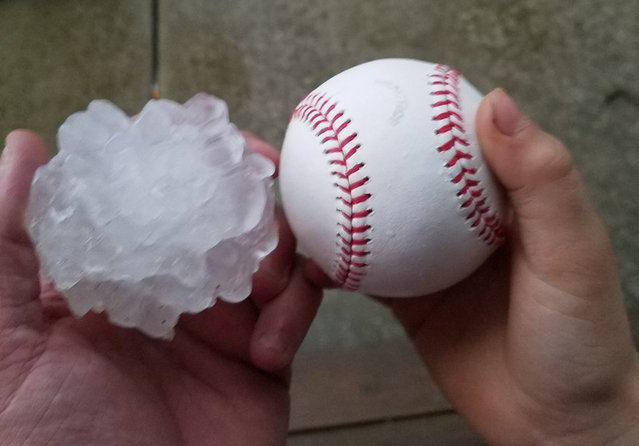 This photo provided by Tim Creedon shows his baseball and a hailstone that fell in the backyard of Creedon's home in Ottawa, Ill., Tuesday, February 28, 2017. Illinois Gov. Bruce Rauner has activated the state's emergency operations center as local officials reported damage from tornados spawned by a late-winter storm system. (Photo by Tim Creedon via AP Photo) 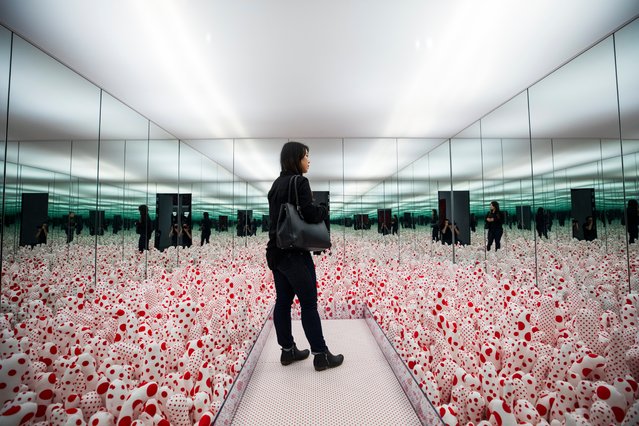 A visitor looks at an interactive exhibit called “Infinity Mirrors” by Japanese artist Yayoi Kusama is on display at the Hirshorn Museum in Washington, DC, USA, 01 March 2017. The exhibit is on display until 14 May. (Photo by Jim Lo Scalzo/EPA)
Edit Del
02 Mar 2017 12:21:00, post received 0 comments
Publication archive:
←   →
Popular tags:
All tags
Last searches: