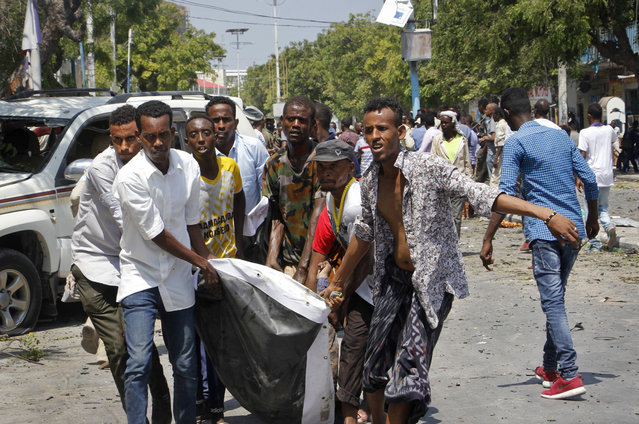 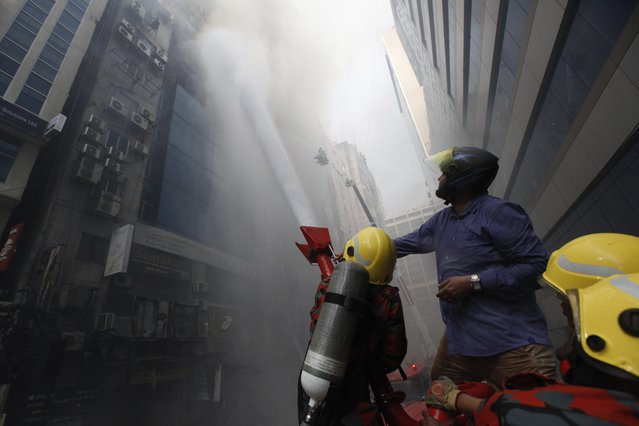 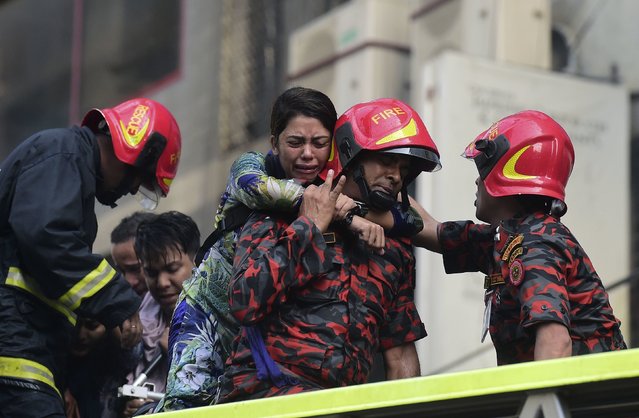 A Bangladeshi survivor reacts after being rescued by firefighters from a burning office building in Dhaka on March 28, 2019. A huge fire tore through a Dhaka office block March 28 killing at least five people with many others feared trapped in the latest major inferno to hit the Bangladesh capital. (Photo by Munir Uz Zaman/AFP Photo) 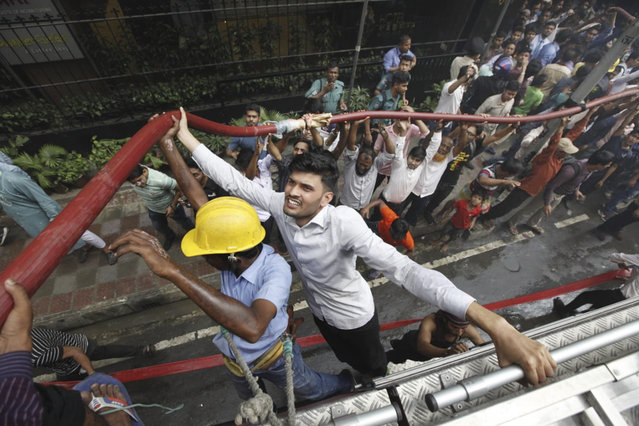 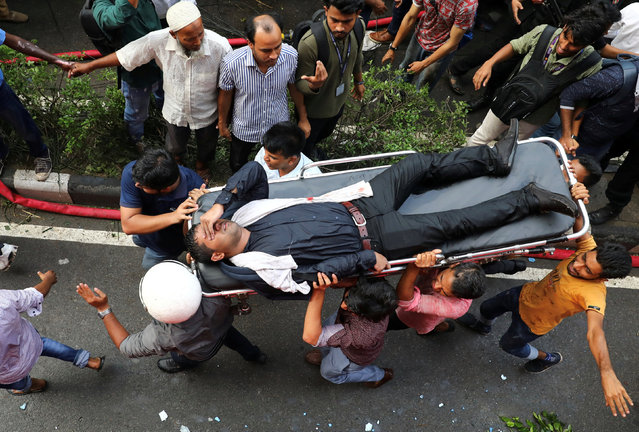 A person is being rescued as fire broke out at a multi-storey commercial building in Dhaka, Bangladesh, March 28, 2019. (Photo by Mohammad Ponir Hossain/Reuters) 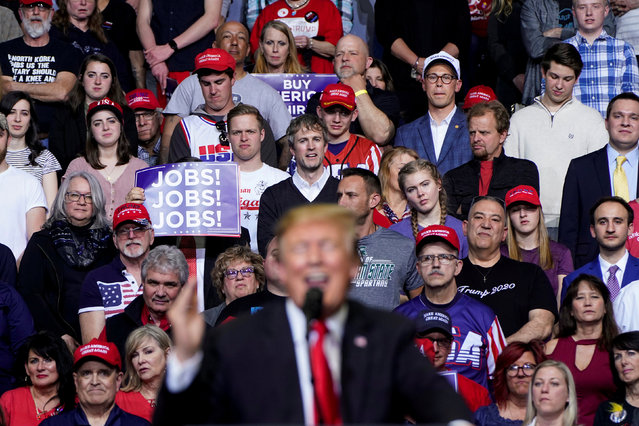 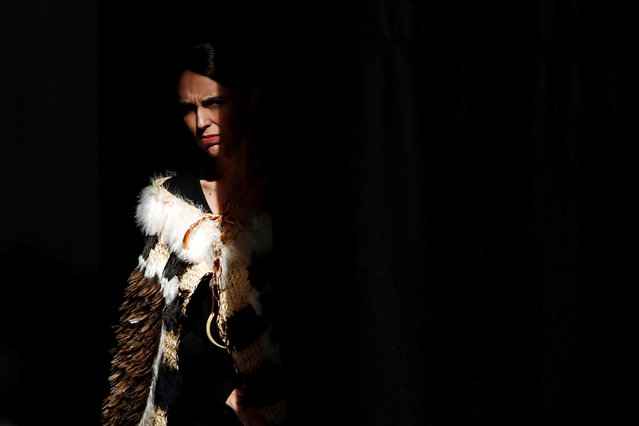 New Zealand's Prime Minister Jacinda Ardern prepares to take to the stage to speak at the national remembrance service for victims of the mosque attacks, at Hagley Park in Christchurch, New Zealand on March 29, 2019. (Photo by Edgar Su/Reuters) 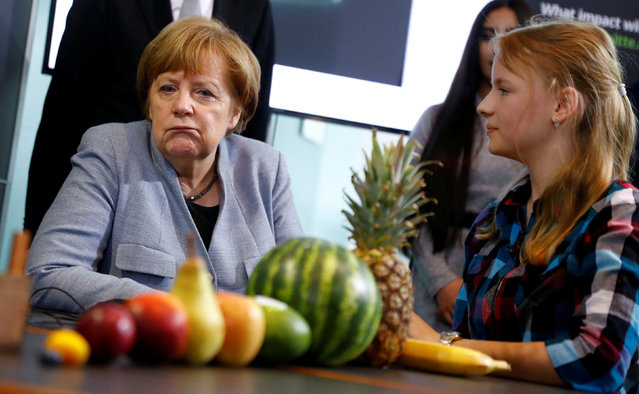 German Chancellor Angela Merkel talks to a participant of a Girls' Day career event at the Chancellery to attract female pupils to careers in IT, technological and natural science sectors of the German industry in Berlin, Germany, March 27, 2019. (Photo by Fabrizio Bensch/Reuters) 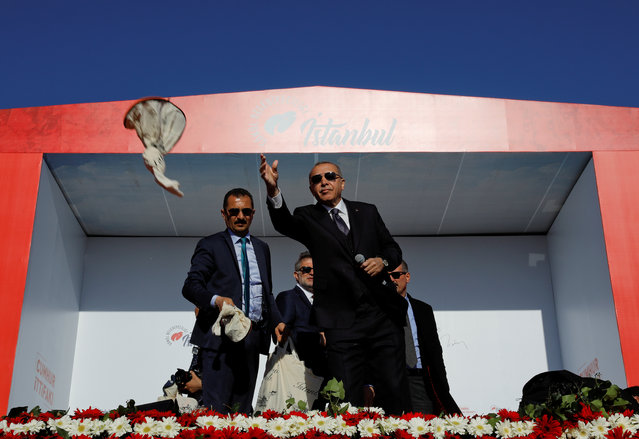 Turkish President Tayyip Erdogan throws gifts to his supporters during a rally for the upcoming local elections, in Istanbul, Turkey on March 24, 2019. (Photo by Umit Bektas/Reuters) 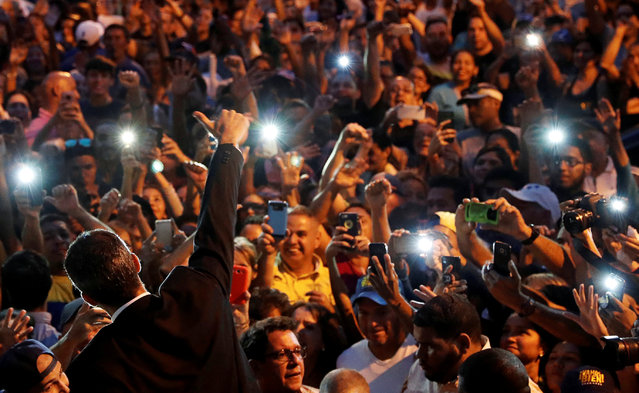 Venezuelan opposition leader Juan Guaido, who many nations have recognized as the country's rightful interim ruler, gives a thumbs up to supporters in Caracas, Venezuela, Venezuela, March 28, 2019. (Photo by Carlos Garcia Rawlins/Reuters) 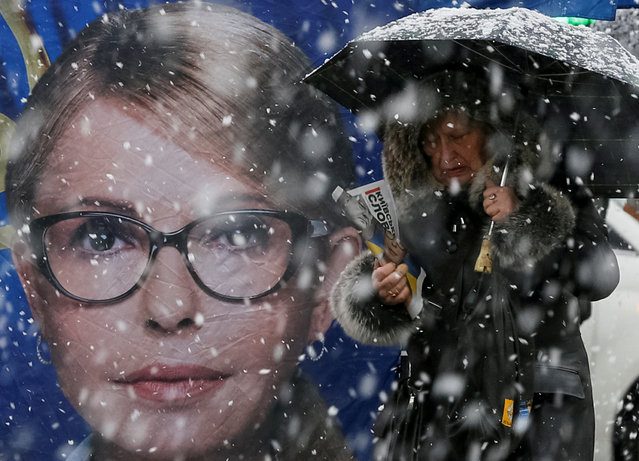 A woman passes by an election campaign tent of leader of opposition Batkivshchyna party and presidential candidate Yulia Tymoshenko, during snowfall in central Kiev, Ukraine on March 27, 2019. (Photo by Gleb Garanich/Reuters) 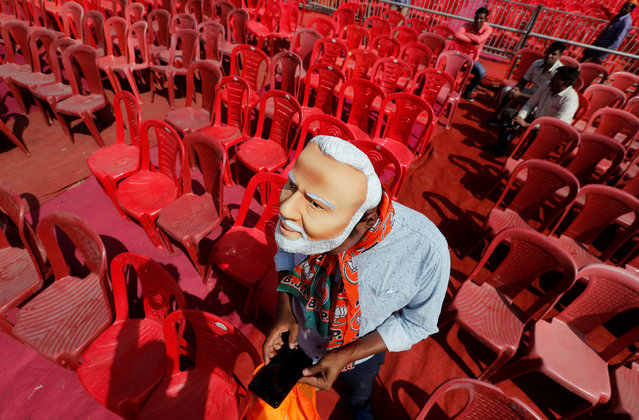 A supporter of India's ruling Bharatiya Janata Party (BJP) wearing a mask of Prime Minister Narendra Modi checks his mobile phone as he attends an election campaign rally being addressed by Modi in Meerut in the northern Indian state of Uttar Pradesh, India, March 28, 2019. (Photo by Adnan Abidi/Reuters) 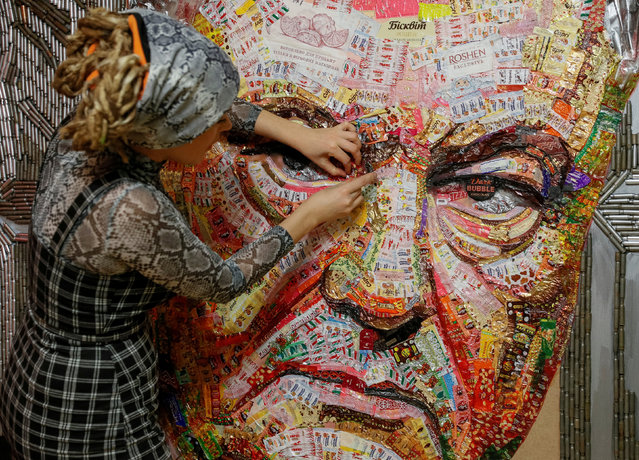 Ukrainian artist Dariya Marchenko works on a portrait of Ukraine's President Petro Poroshenko named 'The Face of Corruption' which is made of wrappers from more than 20 kilograms of Roshen candies and empty shell cartridges brought from the frontline of a military conflict in the east of the country, in Kiev, Ukraine March 27, 2019. (Photo by Valentyn Ogirenko/Reuters) 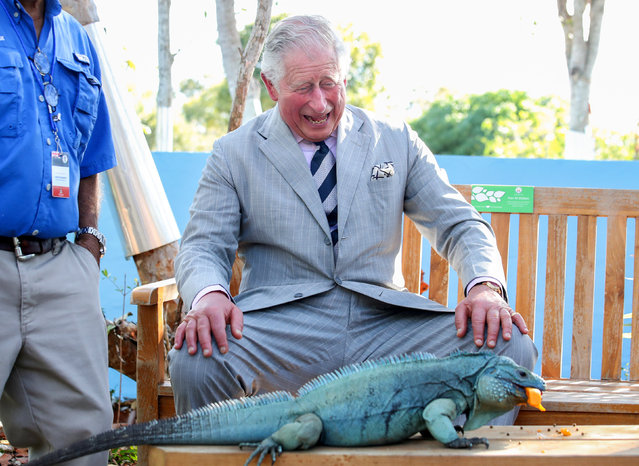 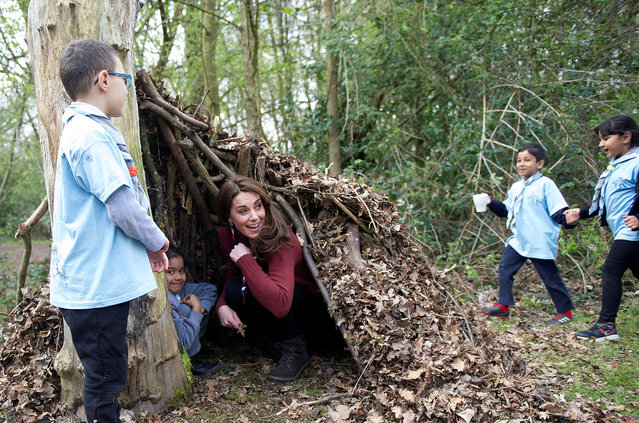 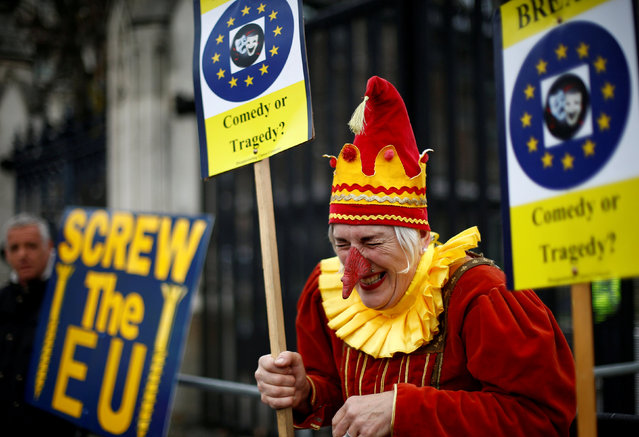 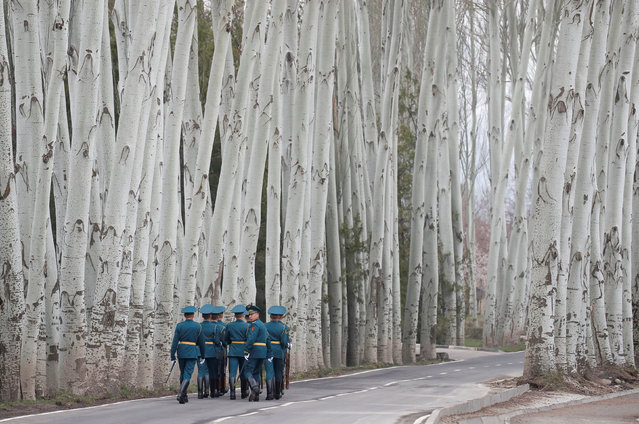 Kyrgyz guards of honour walk away after a welcoming ceremony attended by Presidents Vladimir Putin of Russia and Sooronbay Jeenbekov of Kyrgyzstan in Bishkek, Kyrgyzstan on March 28, 2019. (Photo by Maxim Shemetov/Reuters) 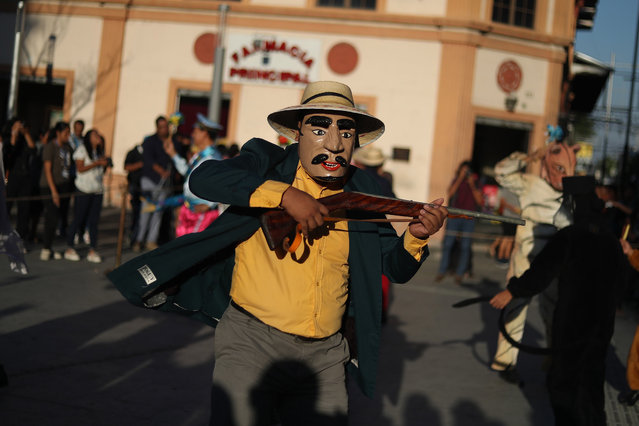 A member of a troupe performs during the celebration of World Theater Day in San Salvador, El Salvador, 27 March 2019. (Photo by Rodrigo Sura/EPA/EFE) 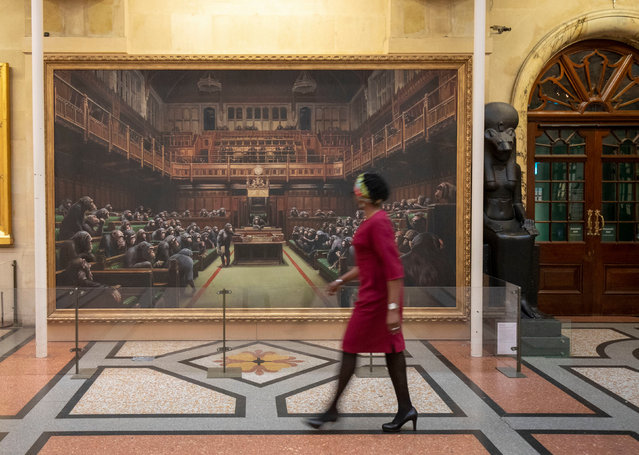 A passerby views the painting Devolved Parliament, by the graffiti artist Banksy, which is going on show at Bristol Museum in England on March 28, 2019. (Photo by Steve Parsons/PA Wire Press Association) 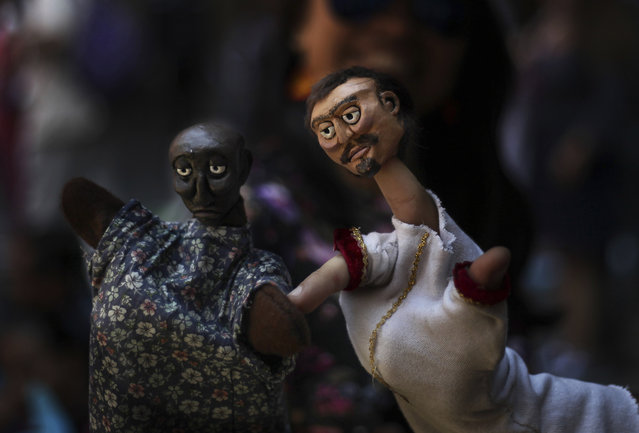 In this March 24, 2019 photo, a puppeteer presents his hand puppets during an event at the National Culture Museum in Mexico City. The event was held in honor of World Puppetry Day, observed earlier in the week on March 21. (Photo by Marco Ugarte/AP Photo) 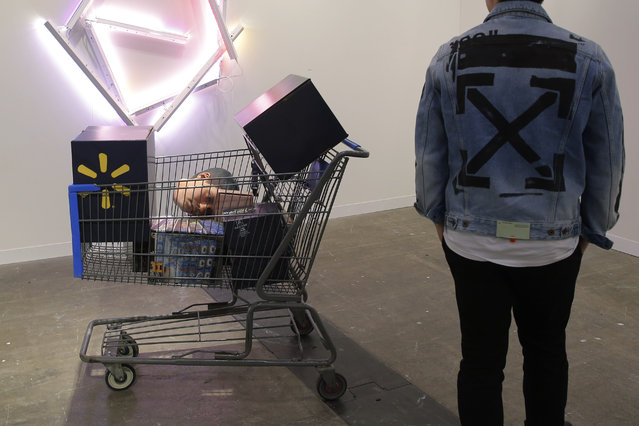 In this Wednesday, March 27, 2019, file photo, a visitor looks at an artwork “In Stock (Walmart Worker's Head)” created by American artist Josh Kline at Art Basel in Hong Kong. Art Basel, one of the world's most prestigious modern and contemporary art exhibitions, returned to Hong Kong in its seventh edition. The prestige art fair is hosting 242 galleries from 35 countries and territories. (Photo by Kin Cheung/AP Photo) 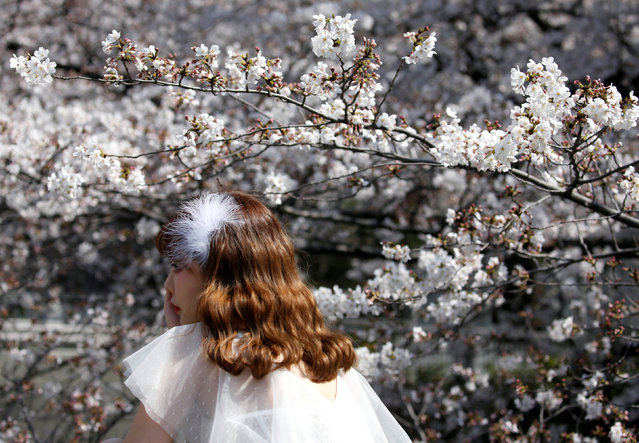 A woman poses for a photograph in front of cherry blossoms in almost full bloom in Tokyo, Japan, March 27, 2019. (Photo by Issei Kato/Reuters) 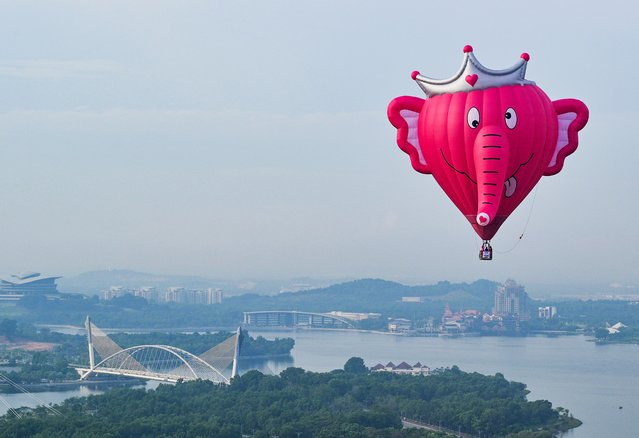