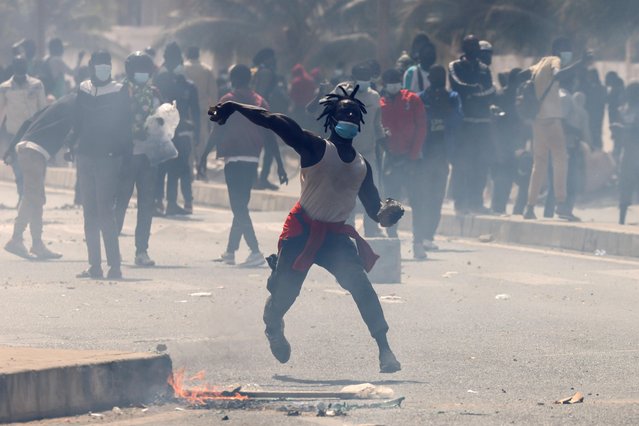 A supporter of opposition leader Ousmane Sonko hurls stones during clashes with security forces in Dakar, Senegal on March 3, 2021. Senegal's main opposition leader, Ousmane Sonko, was arrested on Wednesday after hundreds of his supporters clashed with police in the capital while protesting against a rape accusation he denies. (Photo by Zohra Bensemra/Reuters) 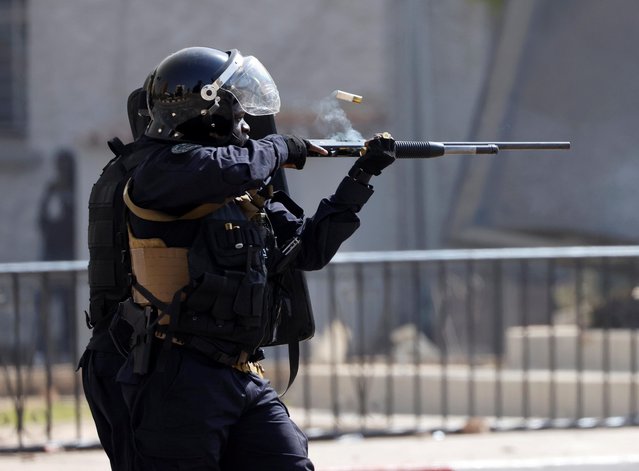 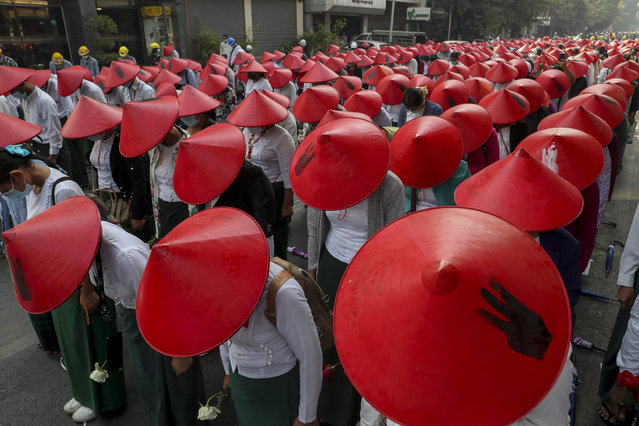 Anti-coup school teachers in their uniform and traditional Myanmar-hats participate in a demonstration in Mandalay, Myanmar, Wednesday, March 3, 2021. Demonstrators in Myanmar took to the streets again on Wednesday to protest last month's seizure of power by the military. (Photo by AP Photo/Stringer) 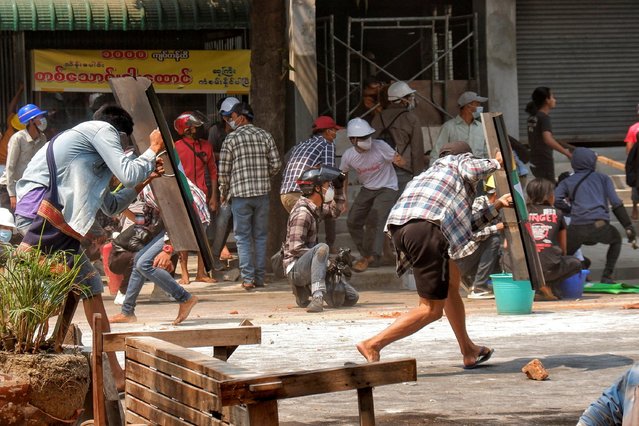 Protesters cover with makeshift shields during an anti-coup protest in Mandalay, Myanmar, March 3, 2021. (Photo by Reuters/Stringer) 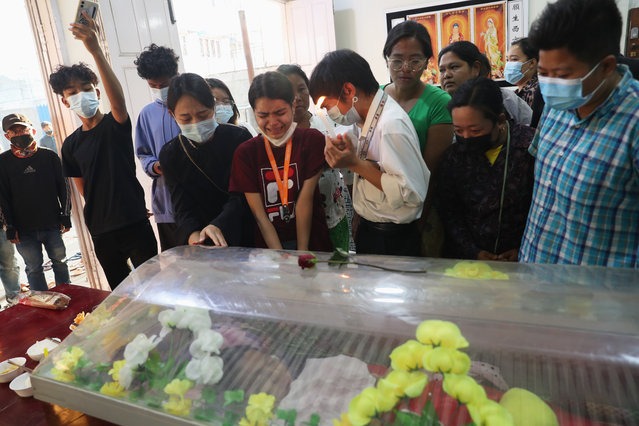 People mourn as they view the body of Kyal Sin, also known by her Chinese name Deng Jia Xi, a 20-year-old university student who was shot in the head while she attended an anti-coup protest rally in Mandalay, Myanmar Wednesday, Mar. 3, 2021. Myanmar security forces shot and killed multiple people Wednesday, according to accounts on social media and local news reports, as authorities extended their lethal crackdown on protests against last month's coup. (Photo by AP Photo/Stringer) 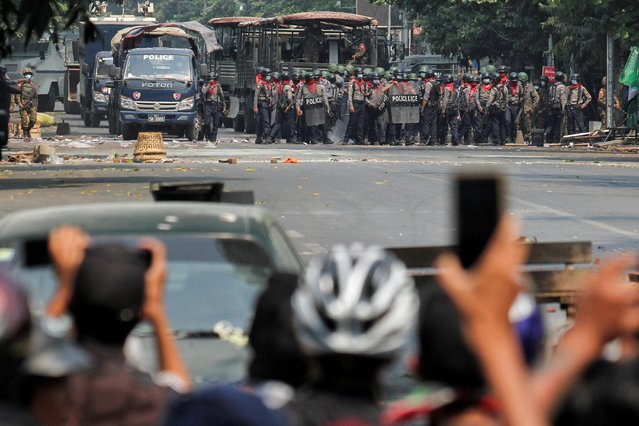 Police stand on a road during an anti-coup protest in Mandalay, Myanmar, March 3, 2021. (Photo by Reuters/Stringer) 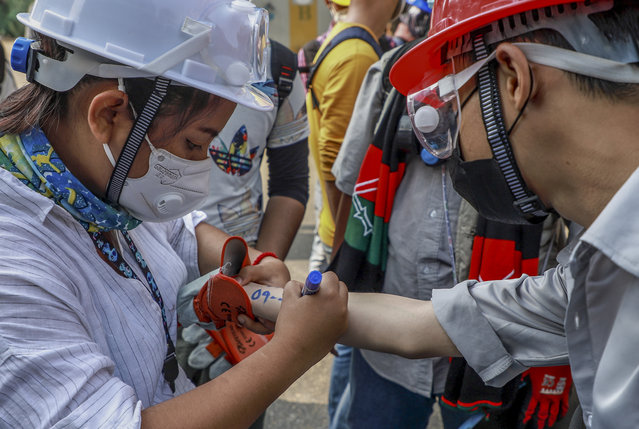 An anti-coup protester writes vital emergency information of another protester on his arm in Yangon, Myanmar Wednesday, March 3, 2021. (Photo by AP Photo/Stringer) 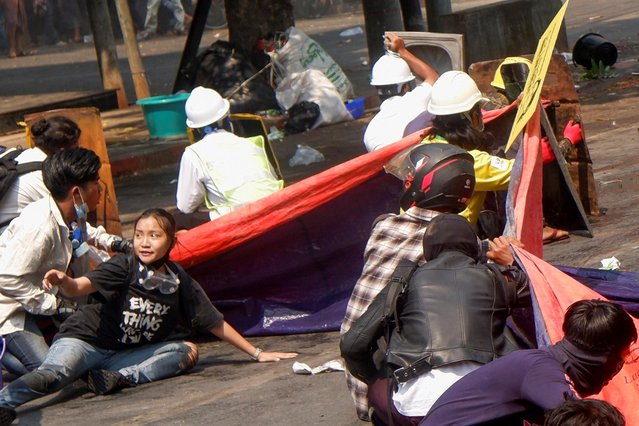 Protesters lie on the ground after police opened fire to disperse an anti-coup protest in Mandalay, Myanmar, March 3, 2021. Among them, Angel, 19, bottom-left, also known as Kyal Sin, took cover before she was shot in the head. (Photo by Reuters/Stringer) 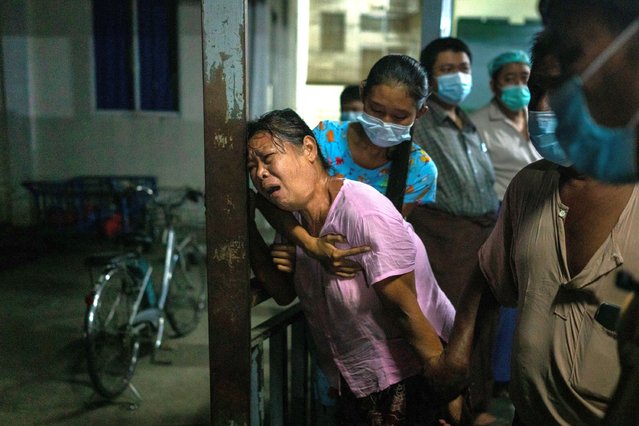 The mother of a protester mourns at a hospital after her son was killed was killed during clashes on March 03, 2021 in Yangon, Myanmar. Medics and health workers have found themselves on the front lines and under intense pressure, as they try to help anti-coup protesters as resistance continues to erupt across the country, to be met with deadly force by the military junta. The military government has intensified a crackdown on protesters in recent days, using tear gas and live ammunition, charging at and arresting protesters and journalists. At least 25 people have been killed so far, according to monitoring organizations, leaving ill-equipped medics to help scores of the injured. (Photo by Stringer/Getty Images) 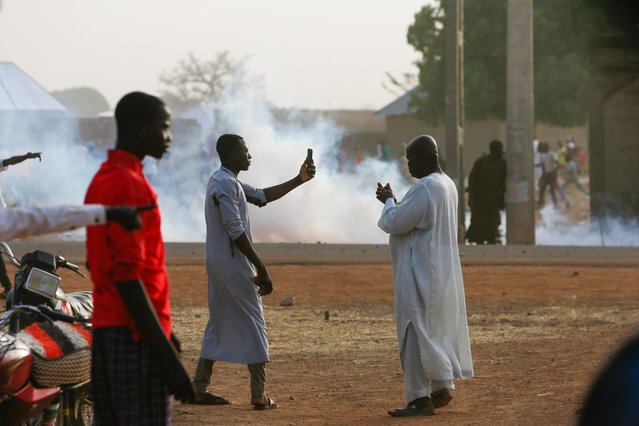 A man uses a phone as a riot broke out after the arrival of the rescued JSS Jangebe schoolgirls in Jangebe, Zamfara, Nigeria on March 3, 2021. Police fired tear gas and soldiers shot their guns into the air in northwest Nigeria as violence broke out amid the return of 279 kidnapped schoolgirls to their families on Wednesday, a day after their release. (Photo by Afolabi Sotunde/Reuters) 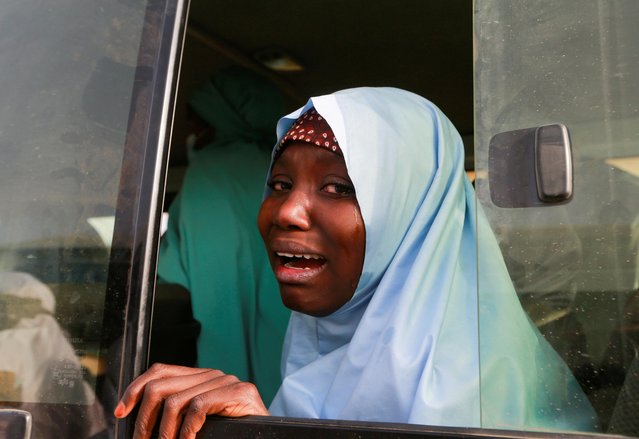 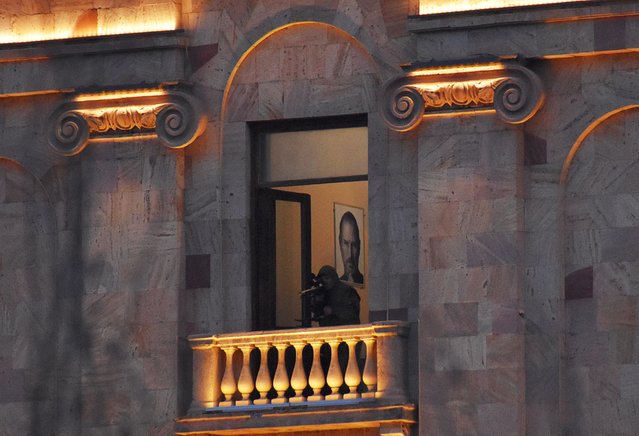 A law enforcement officer observes from a balcony an opposition rally outside the Armenian National Assembly building in Yerevan, Armenia on March 3, 2021. Mass protests against Prime Minister Nikol Pashinyan have been occurring since February 25 when the Chief of the General Staff along with high-ranking army officers demanded Pashinyan's resignation. (Photo by Hayk Baghdasaryan/Photolure/TASS) 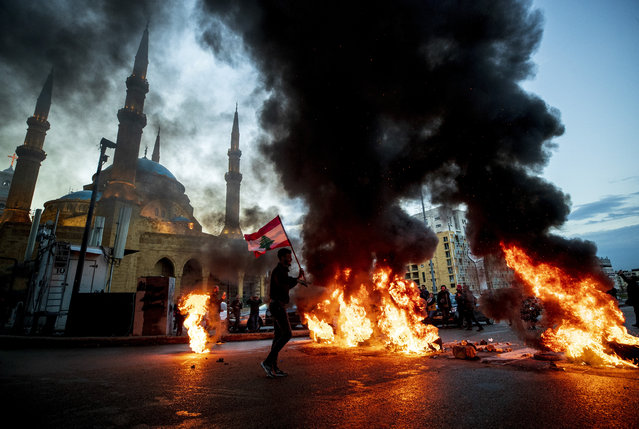 A protester holds up a Lebanese national flag as he walks in front of burning tires that are blocking a main road, during a protest in downtown Beirut, Lebanon, Wednesday, March 3, 2021. (Photo by Hassan Ammar/AP Photo) 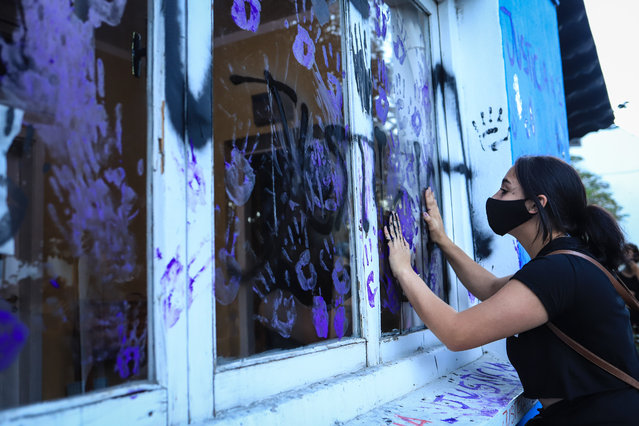 Protest over femicide of Argentinian Guadalupe Curual on March 2, 2021 in Neuquen Province, Argentina. Female demonstrators protested in front of the police station in Villa La Angostura, 200 mts away from where 21-year old Guadalupe Curual was killed one week ago by her boyfriend Bautista Quintriqueo, who tried to commit suicide. Rage boils over amid Argentina's unrelenting femicide crisis. (Photo by Santiago Menichelli/ZUMA Wire/Rex Features/Shutterstock) 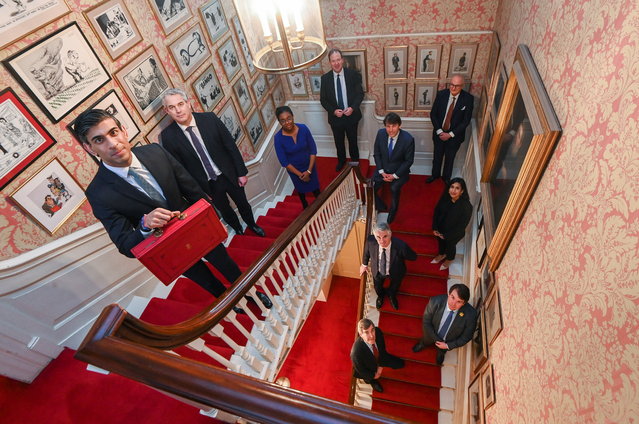 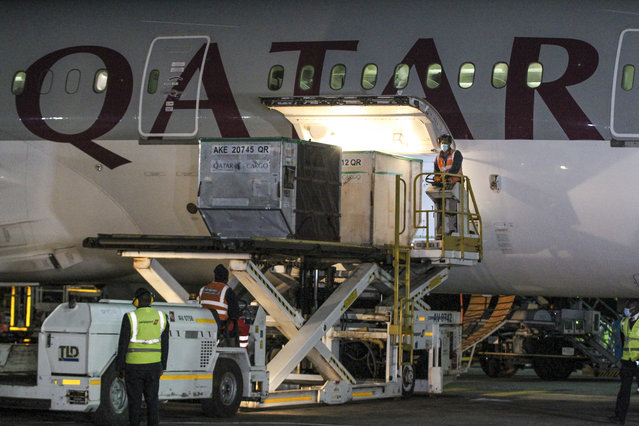 The first arrival of COVID-19 vaccines to Kenya is offloaded from a Qatar Airways flight at Jomo Kenyatta International Airport in Nairobi, Kenya, early Wednesday, March 3, 2021. Around 1.02 million doses of the AstraZeneca COVID-19 vaccine manufactured by the Serum Institute of India arrived at the airport as part of the COVAX facility, according to the Ministry of Health. (Photo by AP Photo/Stringer) 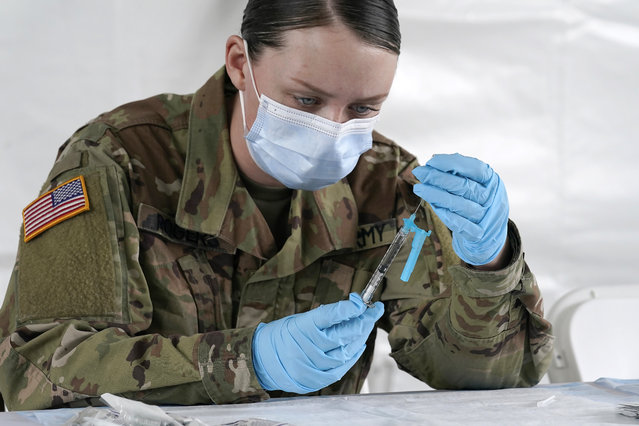 Cemetery workers transport the coffin that contains the remains of Jose Valdelirio believed to have died from the new coronavirus, to a burial site at the Campo da Esperanca cemetery in the Taguatinga neighborhood of Brasilia, Brazil, Wednesday, March 3, 2021. The number of COVID-19 cases in Brazil is still surging, with a new record high of deaths reported on Tuesday. (Photo by Eraldo Peres/AP Photo) A man watches a movie at a cinema after almost a year of theaters being closed due to the COVID-19 pandemic, in Buenos Aires, Argentina, Wednesday, March 3, 2021. (Photo by Natacha Pisarenko/AP Photo) 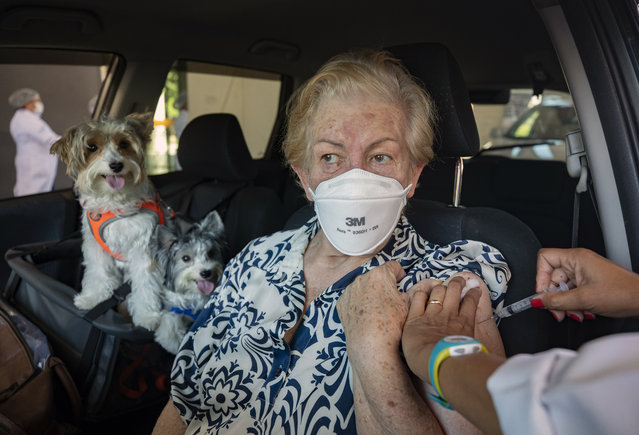 Maria Helena Alcantara gets a shot of the Sinovac COVID-19 vaccine while she sits in her car with her pets during a priority vaccination program for seniors at a drive-thru site set up in the Pacaembu soccer stadium parking lot in Sao Paulo, Brazil, Wednesday, March 3, 2021. (Photo by Andre Penner/AP Photo) 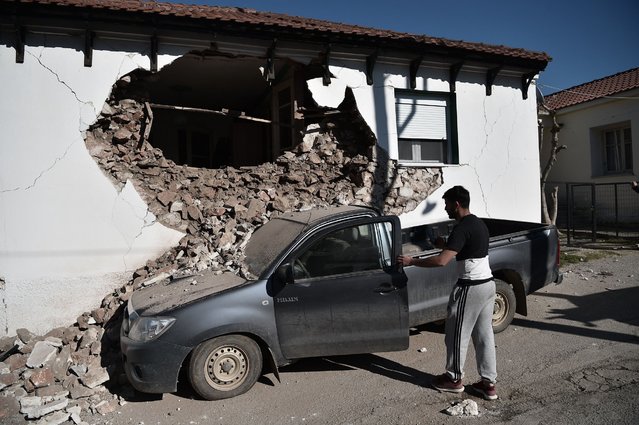 A man tends to hisd car after a building partially collapsed on it in the village of Damasi, near the town of Tyrnavos, after a strong 6,3-magnitude earthquake hit the Greek central region of Thessaly. A strong 6.3-magnitude earthquake hit central Greece on March 3, damaging several buildings, including schools, and prompting residents near the epicentre to rush into the streets. According to the Athens observatory, the epicentre of the quake was 21 kilometres (13 miles) south of the town of Elassona, near Larissa and was eight kilometres deep. (Photo by Sakis Mitrolidis/AFP Photo) 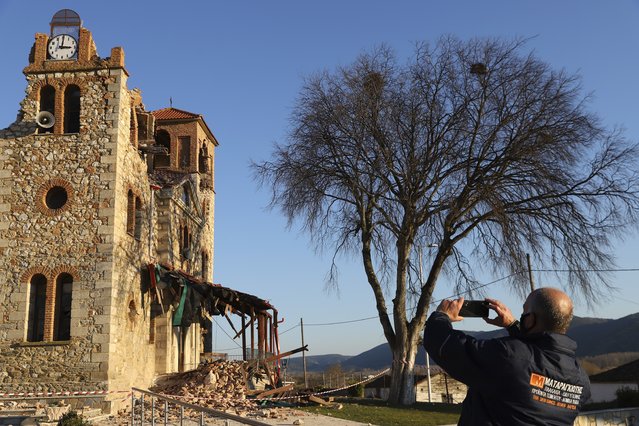 Damage is seen on a church after an earthquake in Mesochori village, central Greece, Wednesday, March 3, 2021. An earthquake with a preliminary magnitude of at least 6.0 struck central Greece Wednesday and was also felt in neighboring Albania and North Macedonia, and as far as Kosovo and Montenegro. (Photo by Vaggelis Kousioras/AP Photo)
Edit Del
04 Mar 2021 08:45:00, post received 0 comments
Publication archive:
←   →
Popular tags:
All tags
Last searches: